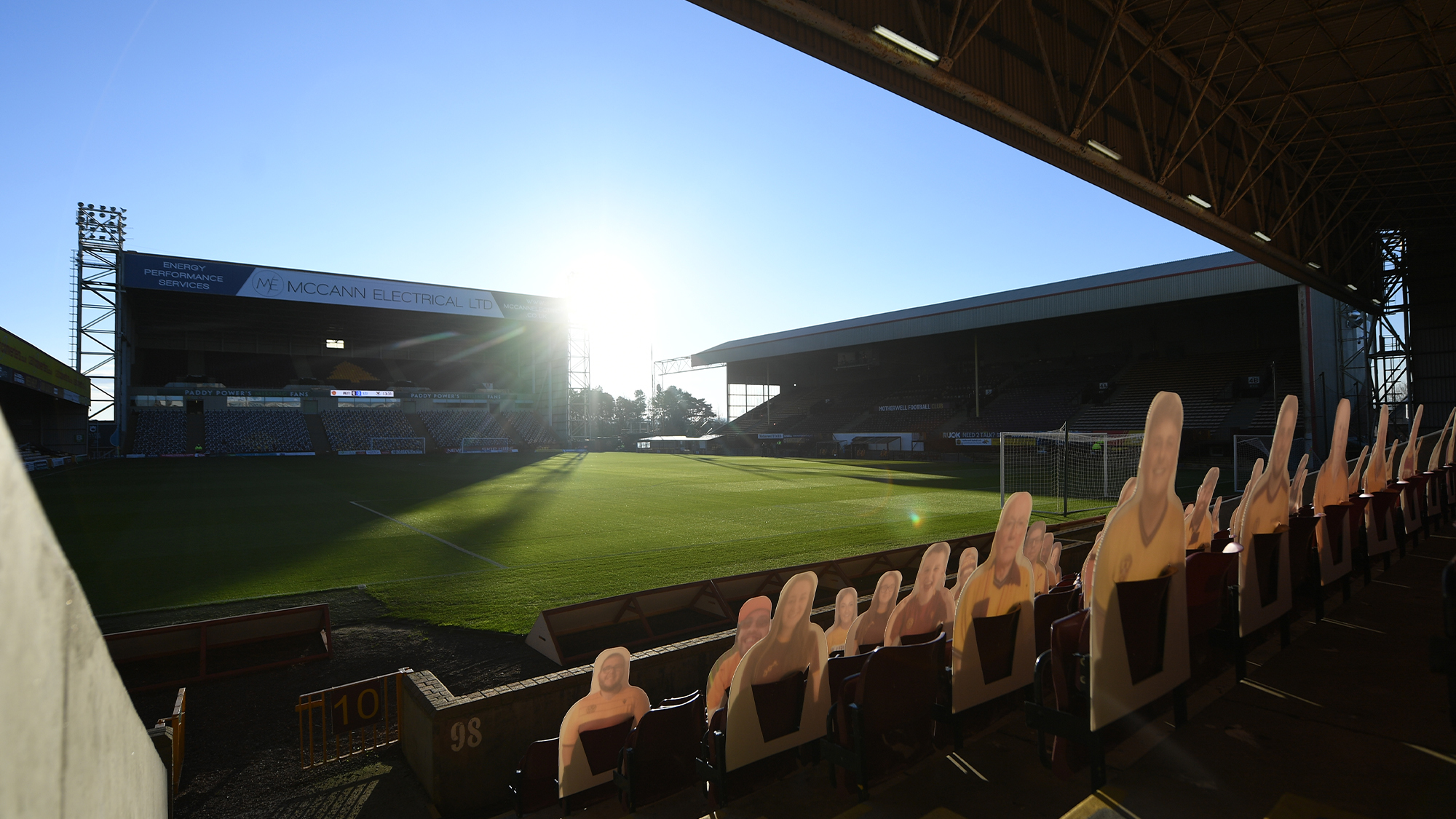 The manager previewed our trip to Fir Park with the media viz Zoom on Wednesday afternoon. 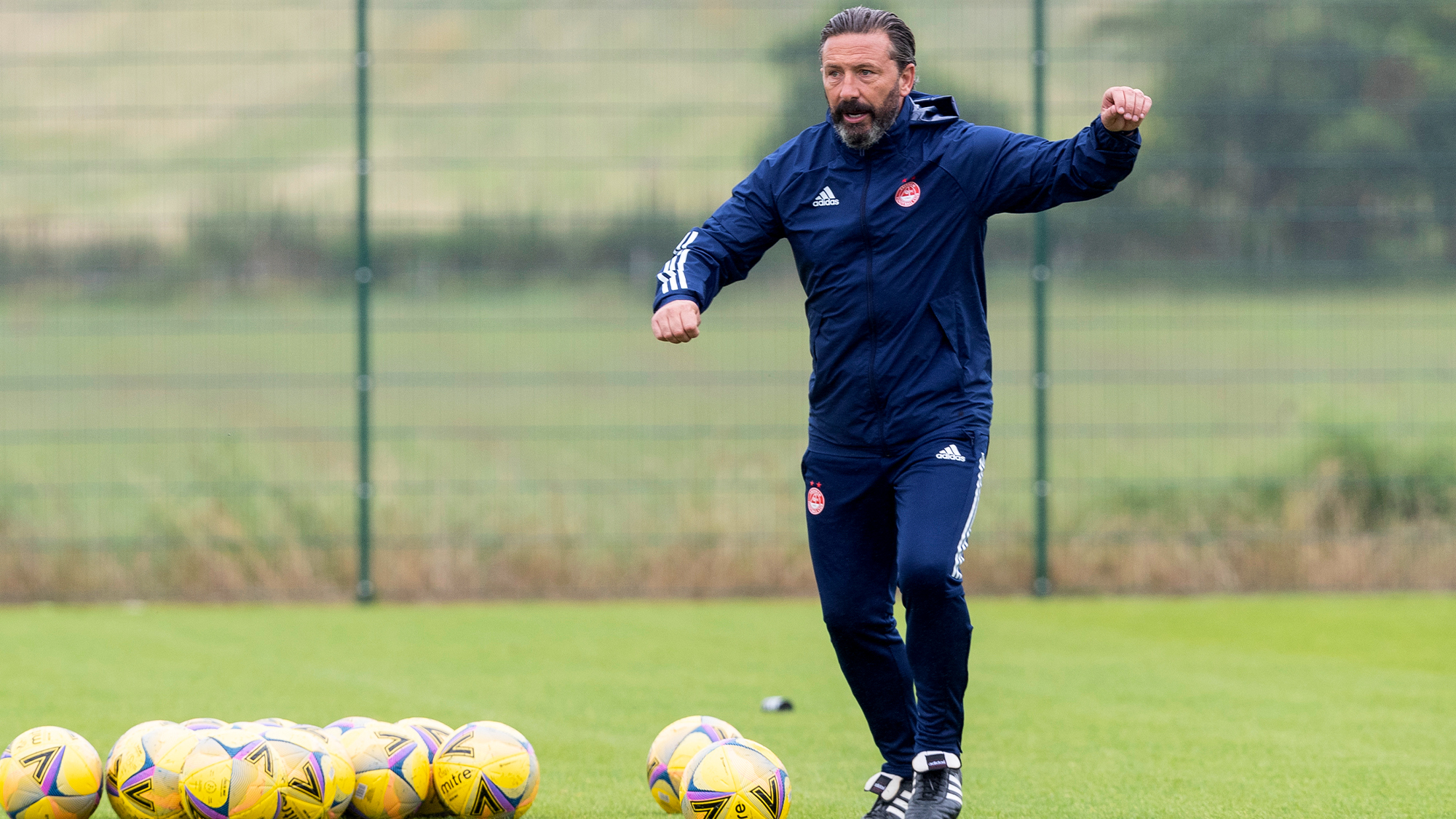 “We got Tommie off at half time but with the nature of the games coming thick and fast that is against us. We have had a lot of injuries this year and we have looked at all sort of reasons why that can be with both matchday and training injuries. That happens to a lot of clubs over the course of the season. For now, we need to deal with that with what we have available. Not to have Tommie available is a real blow when we have so far, few defenders to call upon.

“Scott Wright might have a chance for Dundee Utd (January 2nd). Dylan will be two weeks beyond that, Greg Leigh two weeks beyond that and Marley’s loan will be finished by the time he is back and fully fit. He is probably looking at a February return for himself. Michael Devlin is still a couple of months away, he has had his surgery.

“We fully accept that injuries are apart of football. A lot of our injuries are contact injuries, soft tissues, there are a lot more injuries going about across the leagues at the minute.

“We are really appreciative of the fact that we have the chance to play football. I am not going to mump and moan too much about the injury situation and all of the difficulties that we have had. We could moan about the amount of games that we have had in the West of Scotland at the moment, it is just the way the fixtures have been, but I don’t want to be that guy. 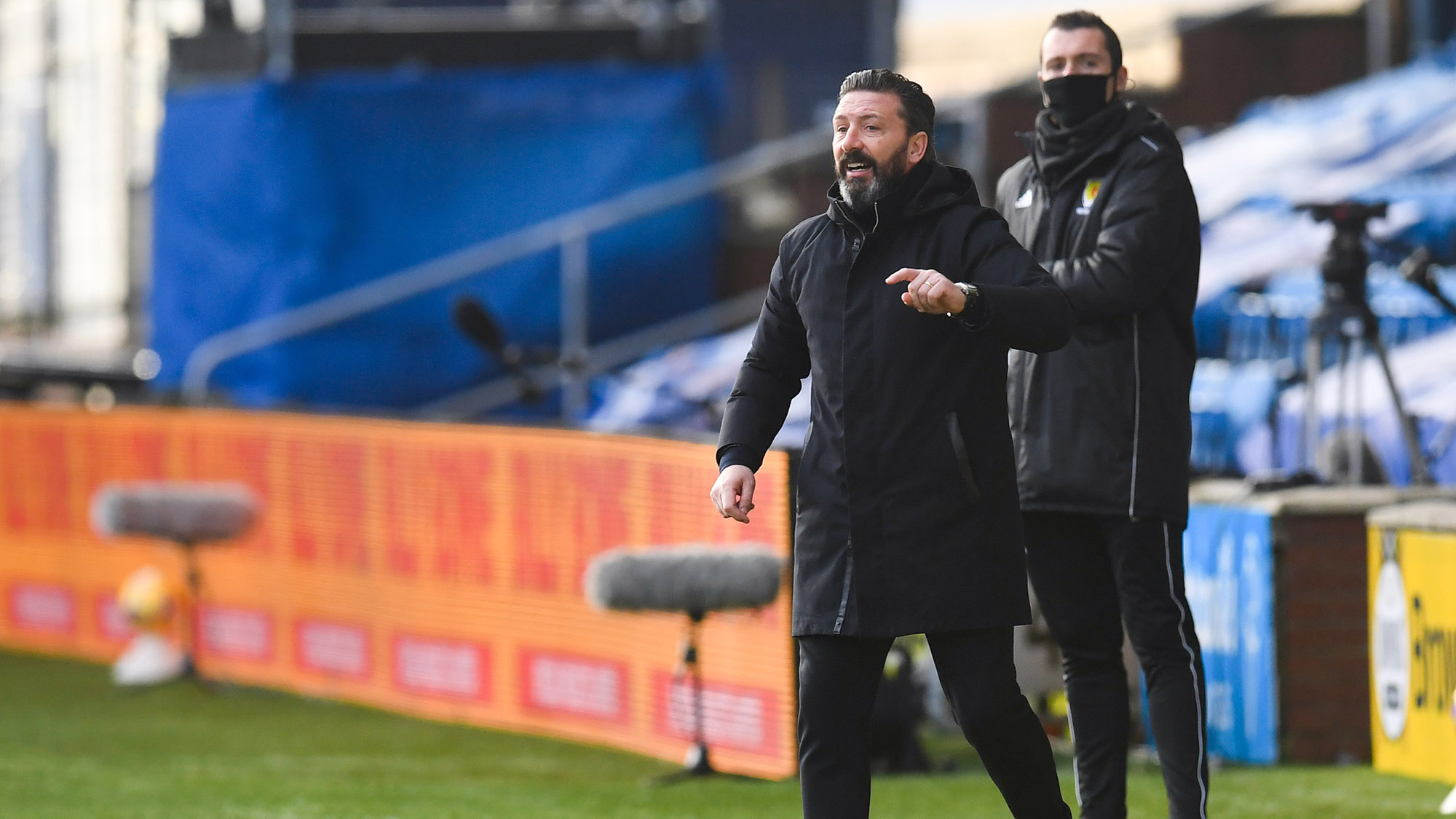 “Six months ago, it was still up for debate wherever we were going to get to play football again. There has been so much good work done by the clubs, every clubs have had to deal with issues. There have been a lot of instances highlighted of what clubs could have done better, including our own. All of the clubs are doing so many good things and doing a lot of good work. Financially putting a lot out there to get football up and running. We are just appreciative and grateful of the chance to play, when you see the country coming to a shutdown again and we are still being allowed to play.

“A few months ago, we all feared if we were going to be able to play again and the affect that could have on everybody. We are grateful we have got a chance to play and enjoy our football. We have got to remind ourselves of that sometimes.

“We just want to win the game. We can look back on what we did better that day. It was three unusual goals to concede from us. The defending that day never gave us a chance to get anything in the game. Motherwell were hands down better than us. We try to keep those types of games to a minimum. We have had some decent results at Fir Park over the years and without doubt we are going to have to produce another one to try and win the game. What we have served up since that Motherwell game has been far more like us. We have been very consistent; our points tally is sitting in a healthy position and we want to try and improve. I believe in the potential of this squad, but every game is a challenge. 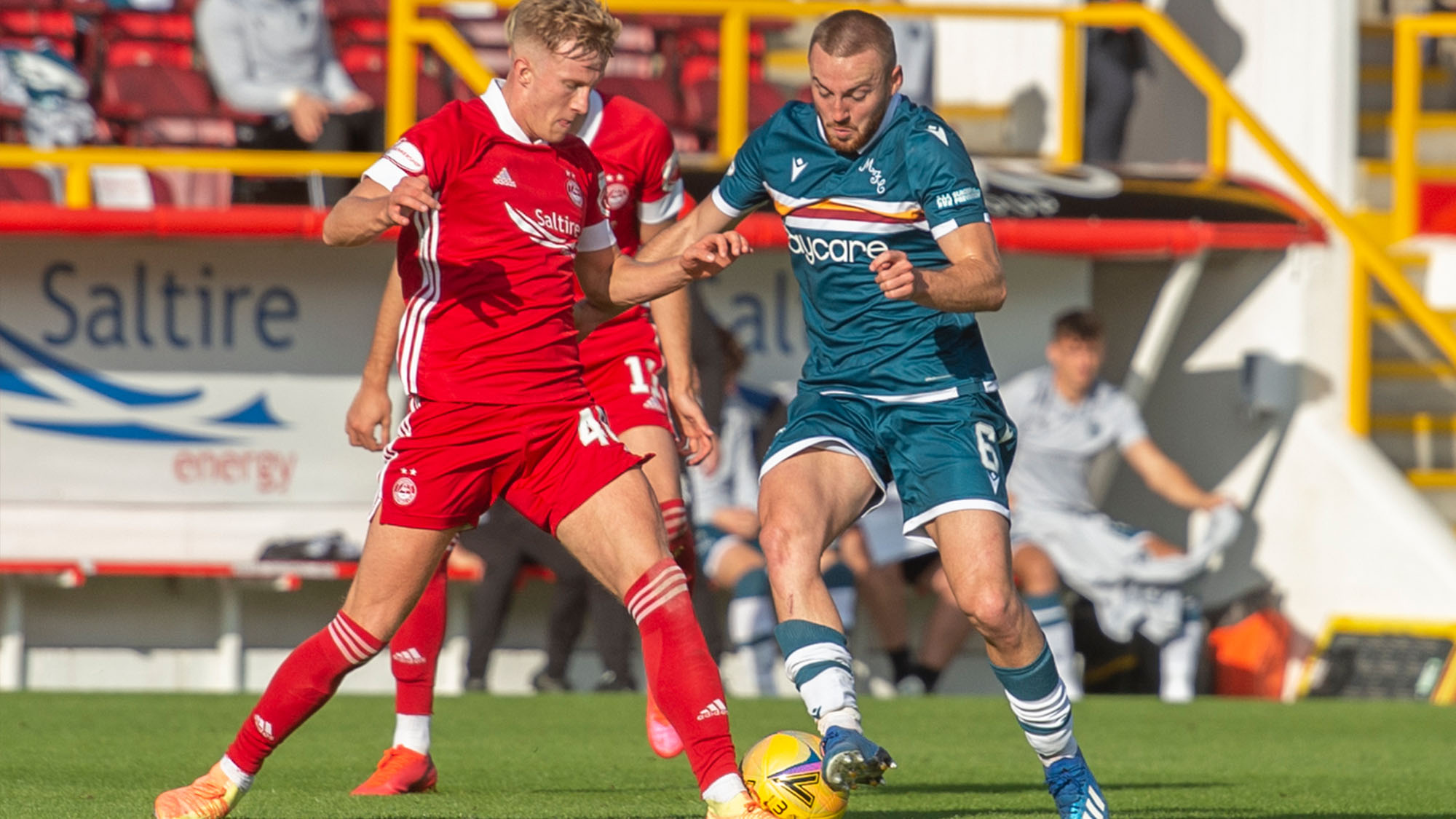 “We will be restricted with what we can do. Like every manager we will try and make one or two adjustments if we can. We will need one or two players to move out as well. We have highlighted areas we would like to improve on and make a couple of signings if we can.

“We have the recall on all of the loans that are out at the moment in January. Some of them are going well and are getting regular football. We need to look at everything that we don’t leave ourselves short if there are other Aberdeen players out there performing week in week out. We need to weigh that up with the bigger picture for those boys and do what is right for them.” 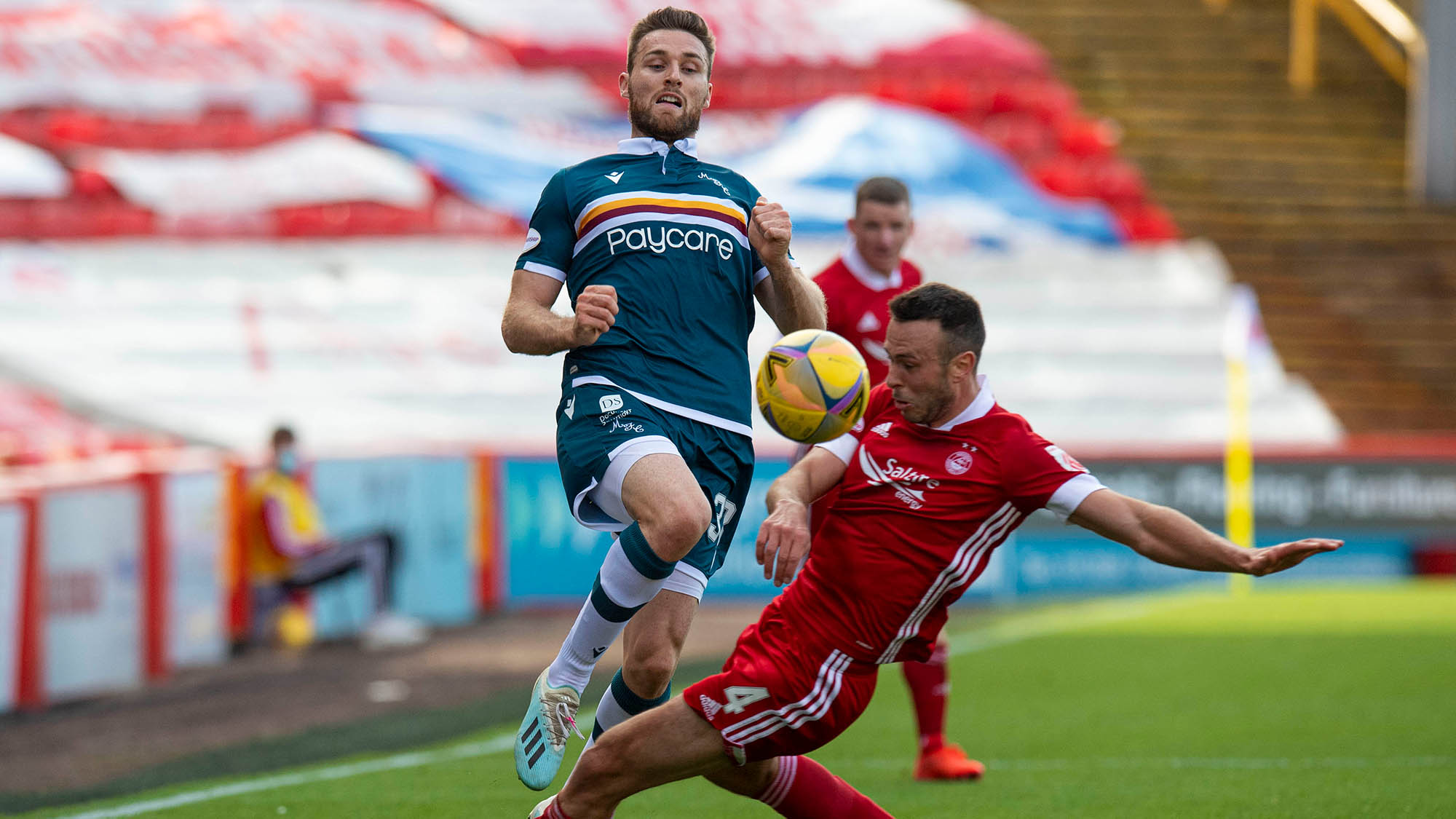 The sides met on the 23rd December 2016 in a pulsating match at Fir Park with The Dons running out 3-1 winners. Graeme Shinnie put Aberdeen ahead after only six minutes with a cool finish after being set up by Jonny Hayes. Scott McDonald pulled Motherwell back on level terms 10 minutes later with a well taken finish. Aberdeen were then awarded a penalty after Adam Rooney was brought down by Craig Samson. Rooney saw his spot kick saved but was able to score from the rebound. An action packed first half showed no signs of easing off when Joe Lewis denied Louis Moult from the penalty spot after Mark Reynolds had collided with Keith Lasley. Aberdeen made sure of the three points late on in stoppage time when Niall McGinn scored from Hayes’ cross. 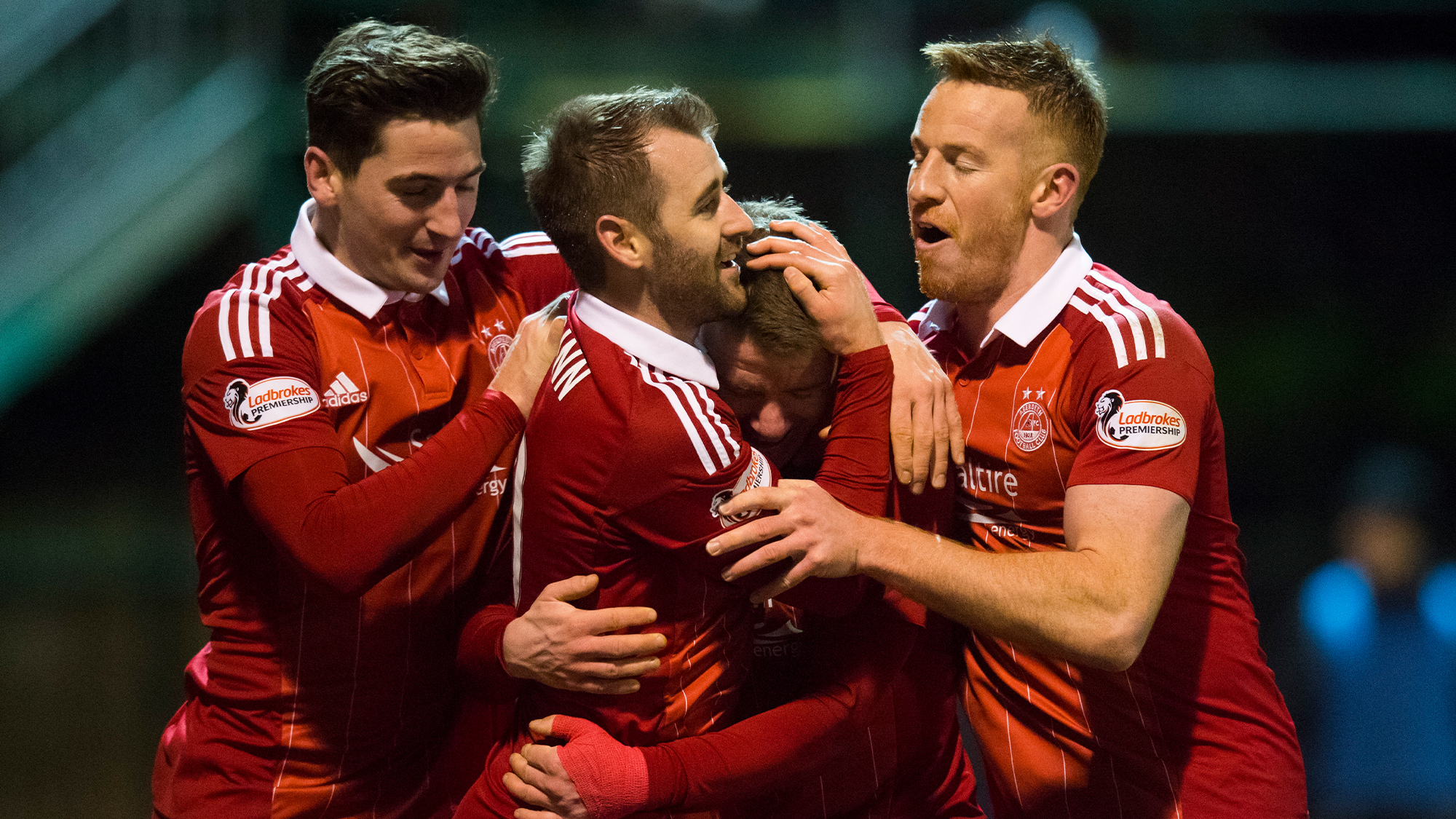 Report | stalemate against the Steelmen 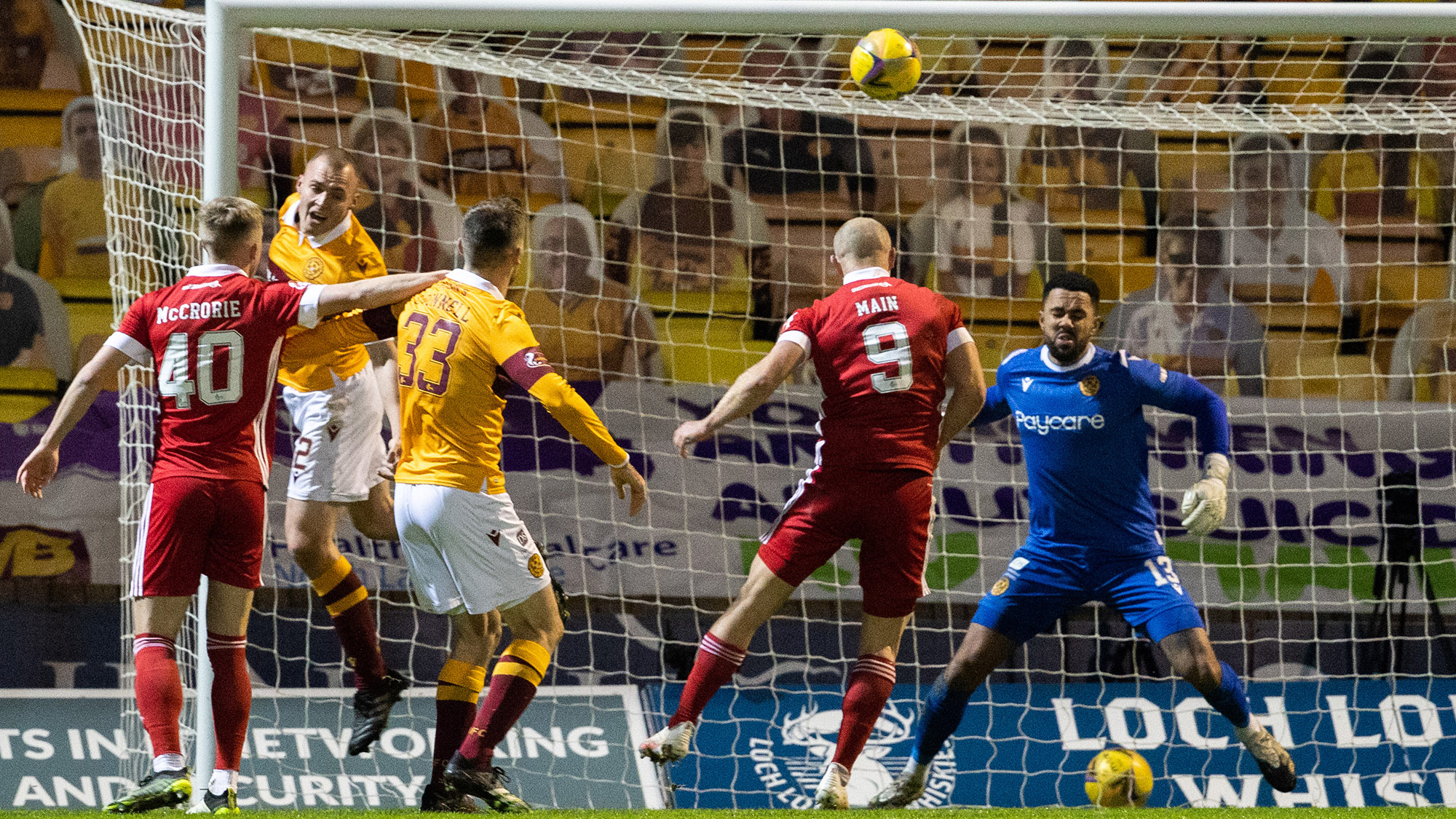 Aberdeen’s dominance of possession down at Fir Park was only rewarded with a single point on an evening when early chances went begging, the Dons not being able to produce a decisive final ball thereafter.

Derek McInnes named an unchanged side for the game at Fir Park, going with the same XI that started the 2-0 win at Rugby Park last Sunday. The only change on the bench was Ronald Hernández being replaced by Calvin Ramsay.

After losing 3-1 to Rangers on Saturday, despite leading until the 73rd minute, Motherwell made a single change to their side, Liam Polworth coming in for Bevis Mugabi who dropped to the bench.

Aberdeen made a lively start and a nicely worked free-kick caused danger in the third minute, Hayes sending Kennedy on his way down the left. Hedges nudged Kennedy’s cross in on to Main but he ran out of road at the near post as he tried to turn the ball in from a tight angle.

There was more good play from Aberdeen a minute later, a nice run and cross from McLennan finding Kennedy as Hedges let the ball run, the winger’s shot taking a deflection on its way wide.

It should have been 1-0 to the visitors in the 13th minute, Hedges firing a left flank corner into the six-yard box, Main onto it and thumping a header against the bar, the ball bouncing to safety. McLennan needed a spell of treatment to his right ankle in the 20th minute before resuming.

Archer was in brilliant form for the hosts in the 22nd minute, Hedges rolling a free-kick to Hayes across the top of the box, Archer diving to his right to save on the deck, a terrific save. It was a high octane start from the Dons, but that first goal still hadn’t come.

Motherwell steadied the ship to some degree thereafter, before Hoban was the next man to need treatment, a problem with his right ankle bringing the physios on in the 33rd minute before he too continued. Lewis was finally called into action in the 38th minute, grabbing an O’Hara free-kick from 25 yards that went straight at him. It was generally a better ending to the half from the home side, but the Dons headed back into the changing room wondering how they were still level.

Cosgrove was on for the Dons at the break, replacing McLennan, Aberdeen picking up the pace again from the restart, but though they enjoyed the better of the play, they struggled to chisel out any real openings, two early corners wasted too.

Good defending from Motherwell managed to keep the Dons at arm’s length in the opening exchanges of a pretty sterile second half. Cole came on for Lang in the 68th minute as the hosts looked to try and break the stalemate.

The Dons were struggling to find the final ball to capitalise on the possession they were enjoying. Both Ferguson and Cosgrove tried to bundle their way through either side of the 70 minute mark but the Steelmen had plenty of bodies back to flood their own box.

It was Motherwell who weren’t far away in the 75th minute, Watt feeding Cole in behind the Aberdeen defence, his cross running through the six-yard box and thankfully away to safety, Polworth unable to get on the end of it.

Great play from Hayes and Considine opened Motherwell up at last in the 78th minute, Hayes’ cross reaching Kennedy, his header looking goalbound until Grimshaw popped up to block. ‘Well responded, Watt away down the left, squaring for Polworth, Considine doing brilliantly to get into position to block the shot on the edge of the six-yard box.

Kennedy took one for the team as Cole darted away on the break, pulling him down and collecting a booking, though the move was begun when the referee missed a clear foul on Hedges in the Motherwell half. Before the kick was taken, White replaced Watt in the 90th minute.

The Dons had one last chance to put the ball in the box with a free-kick in added time but again it came to nothing, leaving the game as a stalemate.