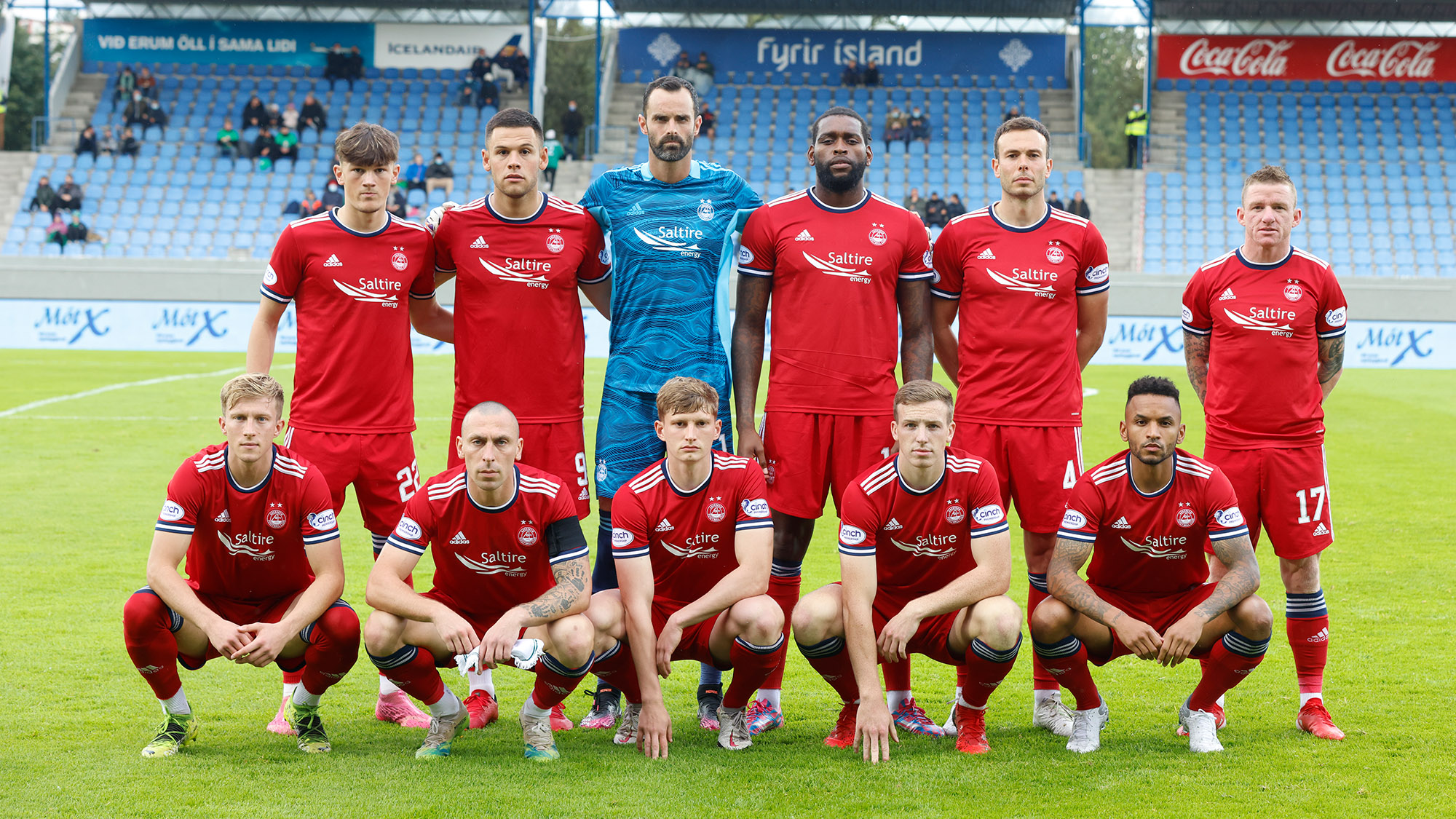 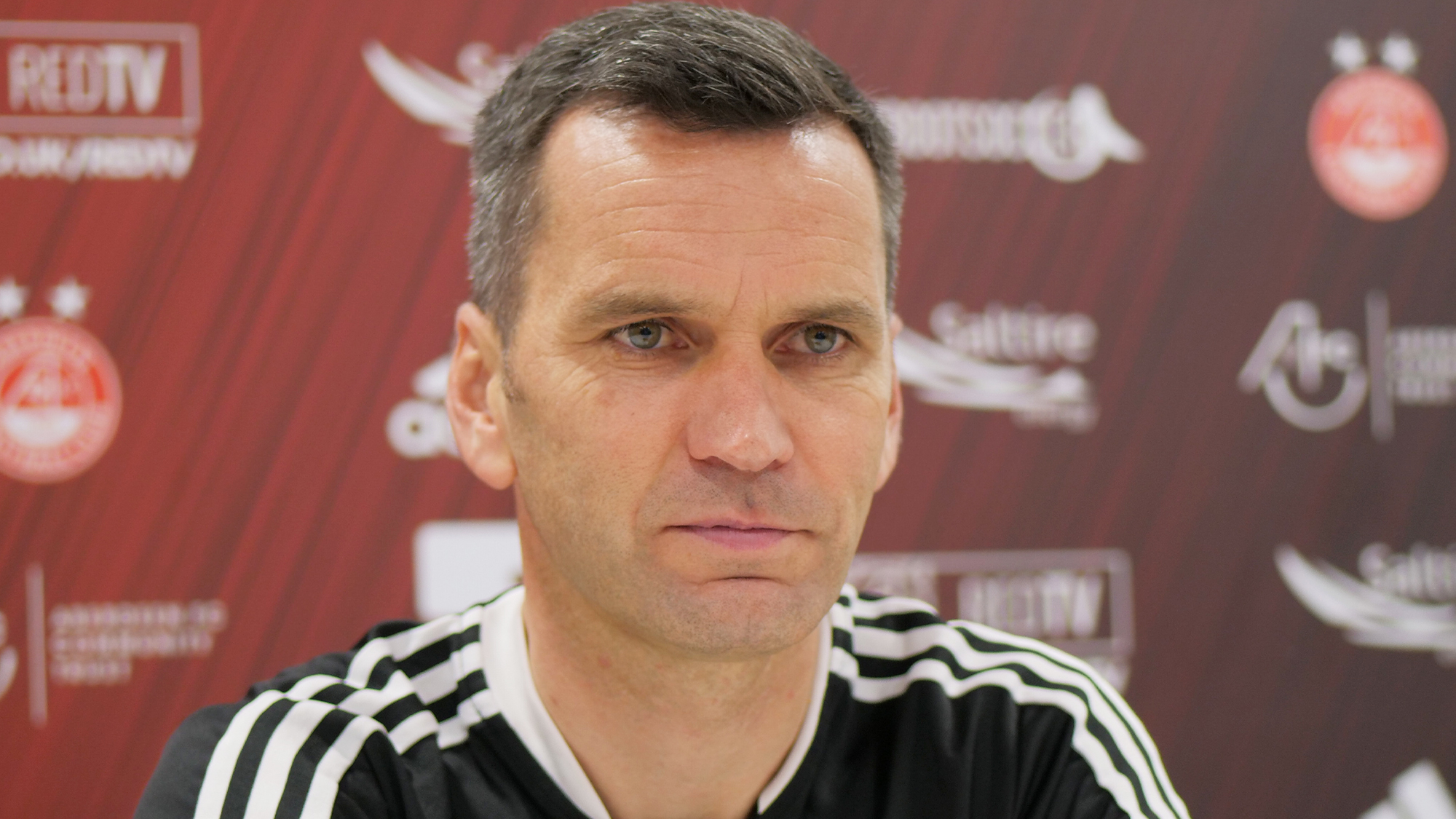 The manager sat down with the media via Zoom on Friday lunchtime to preview our game with Livingston on Sunday.

To watch in full on RedTV, please click here.

“We knew it was going to be a difficult tie, we were under no illusions about that. I feel like the start of the game was particularly good and the response in the second half was good. It was a pleasing night. We have come away with a win and it sets us up for a big game at Pittodrie next week which was the aim when we went into the away leg. 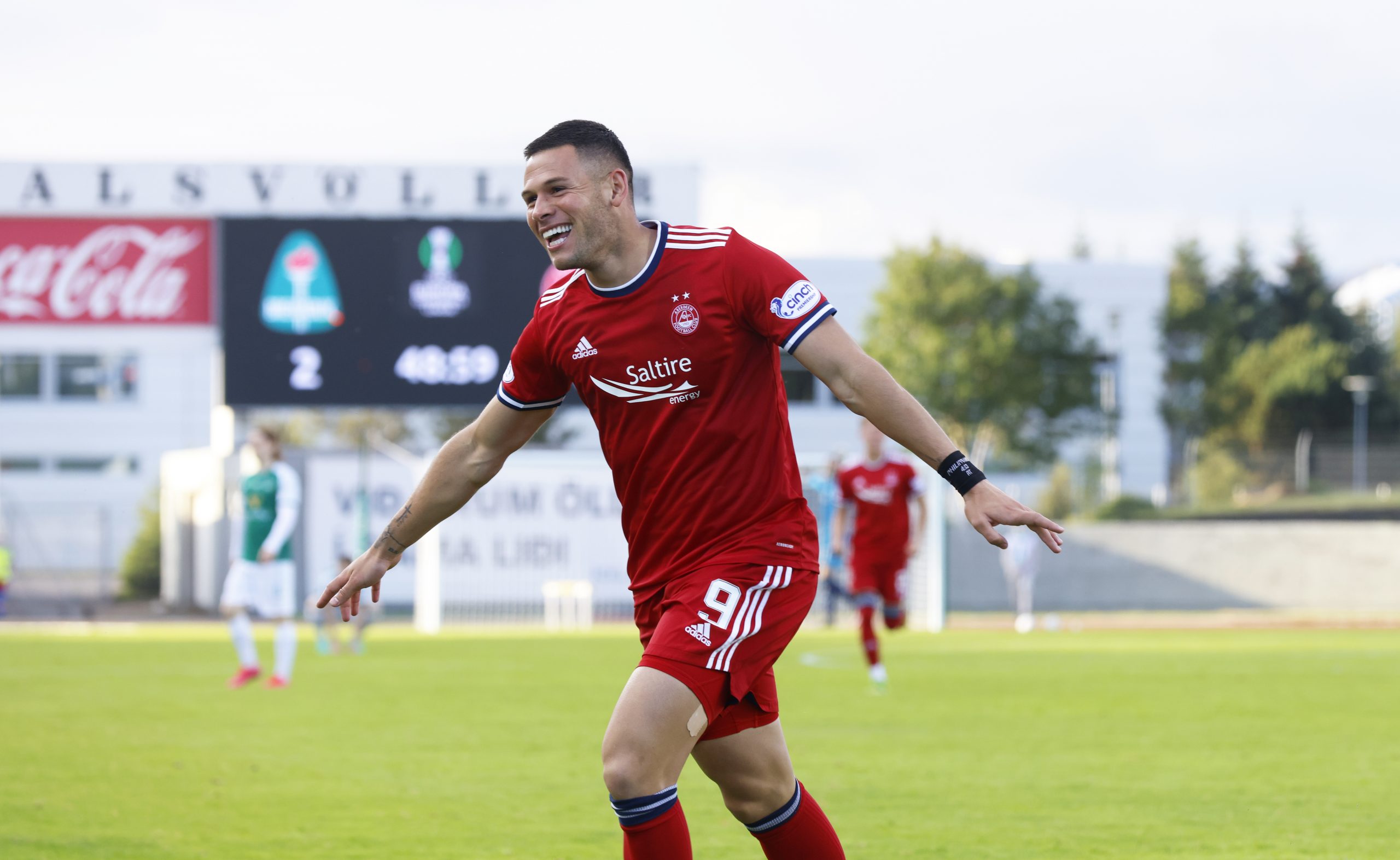 “You don’t get that good from set plays without practicing. Calvin has spent a lot of time working on it. We are pleased that it has come to fruition in the last few games. Long may it continue. We have got to keep it rolling.

“If we are allowed full crowds at Pittodrie next week it would be an important part of the game. It will be an intimidating atmosphere, the players will respond to that. It would be great to see that backing. The players have given the fans something every time they have felt the support and I am hopeful they are seeing a group of players who are proud to represent the club. 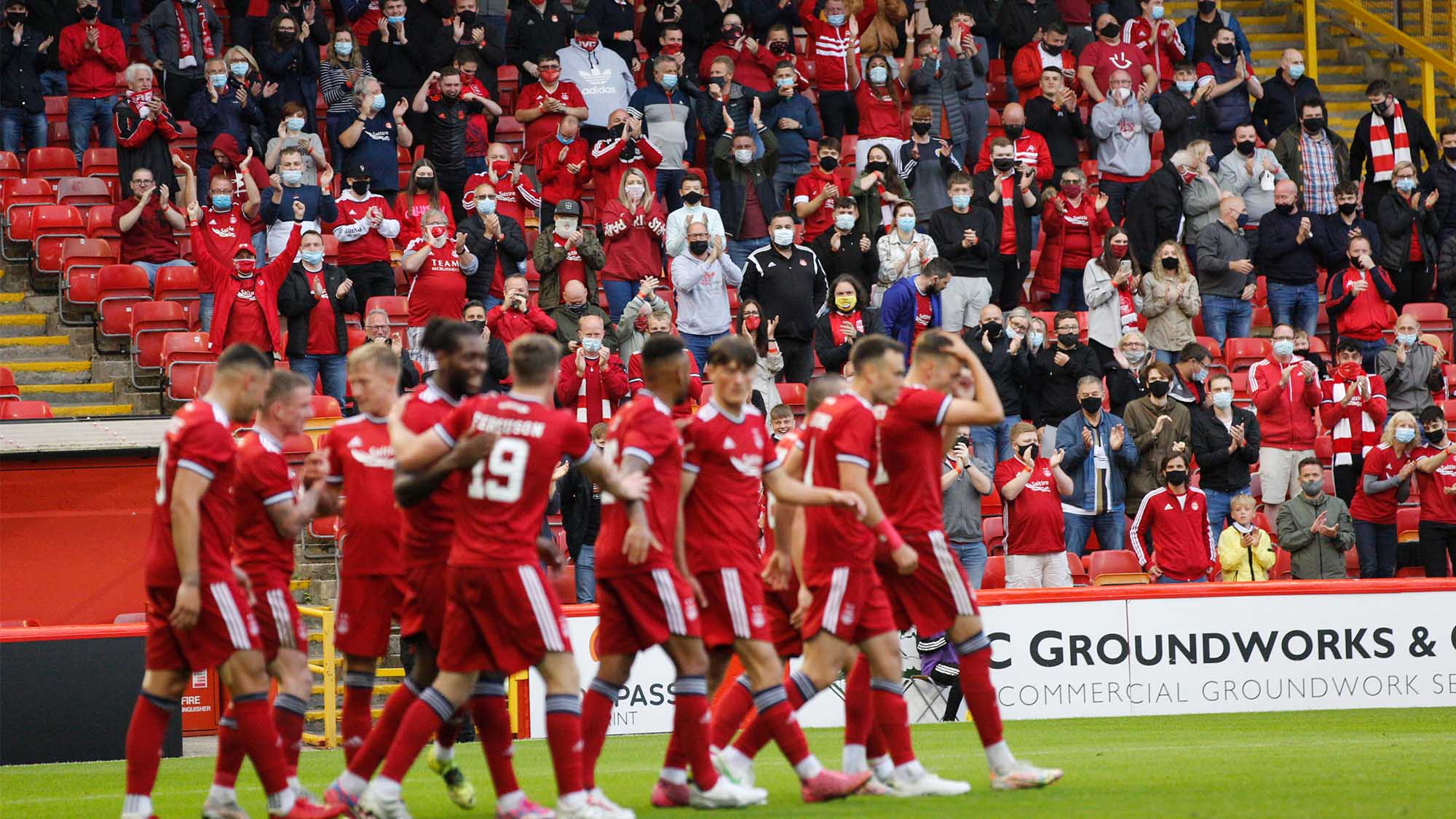 “It is important to keep the momentum up at Livi. We have got a big group of players who are desperate to play. It is a quick turnaround. The boys would have got to their beds at around 4/4.30am on Friday morning. Livingston haven’t had that. It is a challenge that we are up and ready for. We know it will be difficult but we will be as prepared as we can be and we are looking forward to it.

“My first game for the club was against Livingston and I went on record then saying how good a job David Martindale has done and he continues to do that. It is going to be difficult. Davie is a good manager, he gets the best out of his group of players and he will want to do that again this weekend. We will be on our guard and have the upmost respect for Livi.

“The way that the players have trained means they are in my thinking. The fact that we made changes at half time means that the three players who came off will be fresh for Sunday. I don’t think you will see a multitude of changes because of the respect for have for Livingston. You will see a different starting XI, but there won’t be eight or 10 changes. We will pick a team that is capable of going to win and compete at Livingston, knowing what the opponents will offer.

“We went to Livingston at the tail end of last season and produced a really good performance. The pitch at Livingston is probably a better pitch than the one we played on in Iceland. The pitch isn’t an issue and we are looking forward to it. 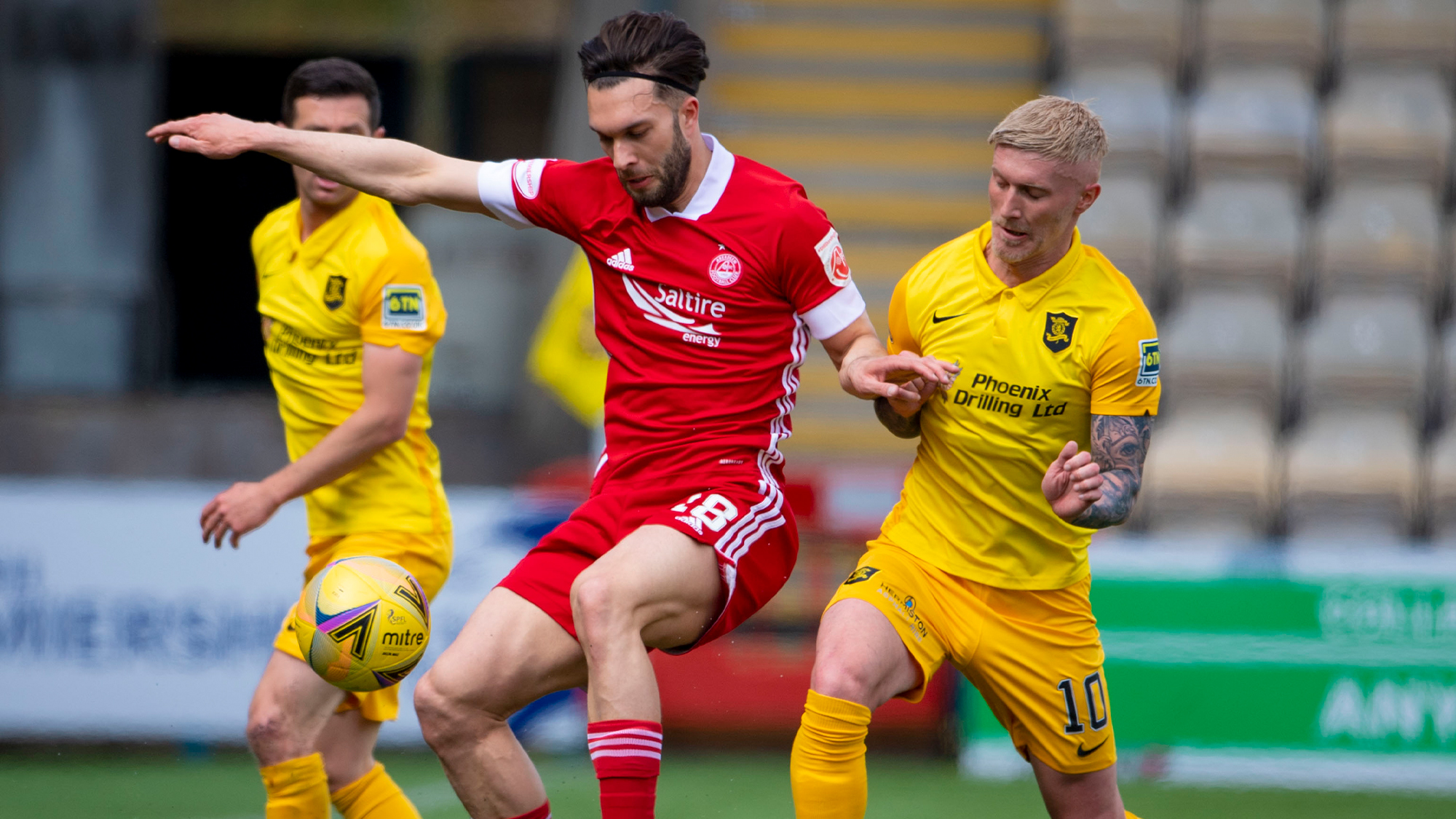 “We felt at half time on Thursday we could use the group of players and that is why we made the changes at half time. That is why it is important that the players who haven’t played as much so far are ready to roll as we look to them to come in and help, which they did.

“It is up to them to chose how they approach the game. They might fancy their chances because we feel like we are a little bit tired and they might want to get in our faces. We will be ready for any eventuality and it is up to us to overcome it. It is not up to me to talk about the opponents and to talk about their strengths and weaknesses and how they will approach games.” 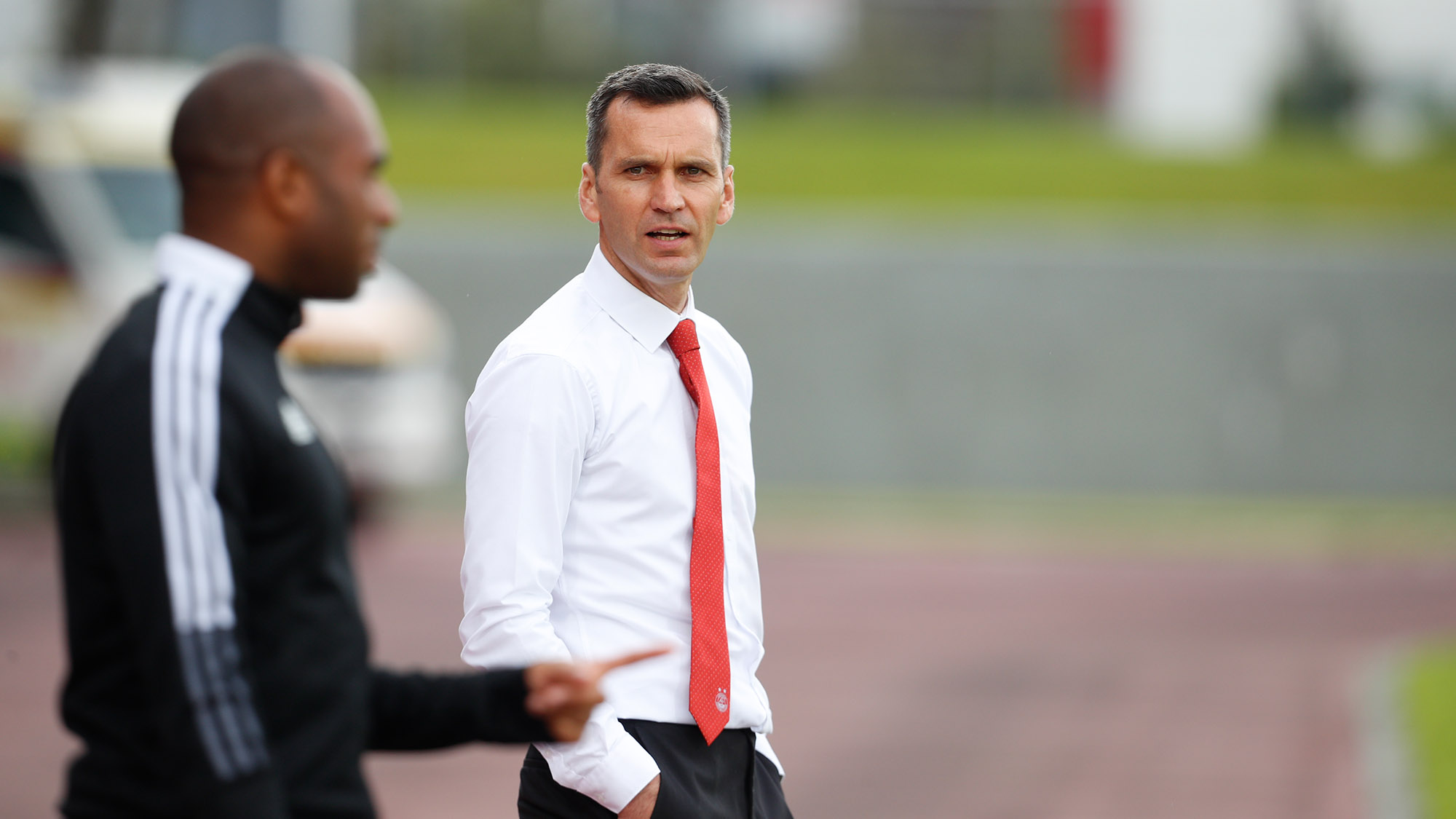 report | late drama as Dons get the win 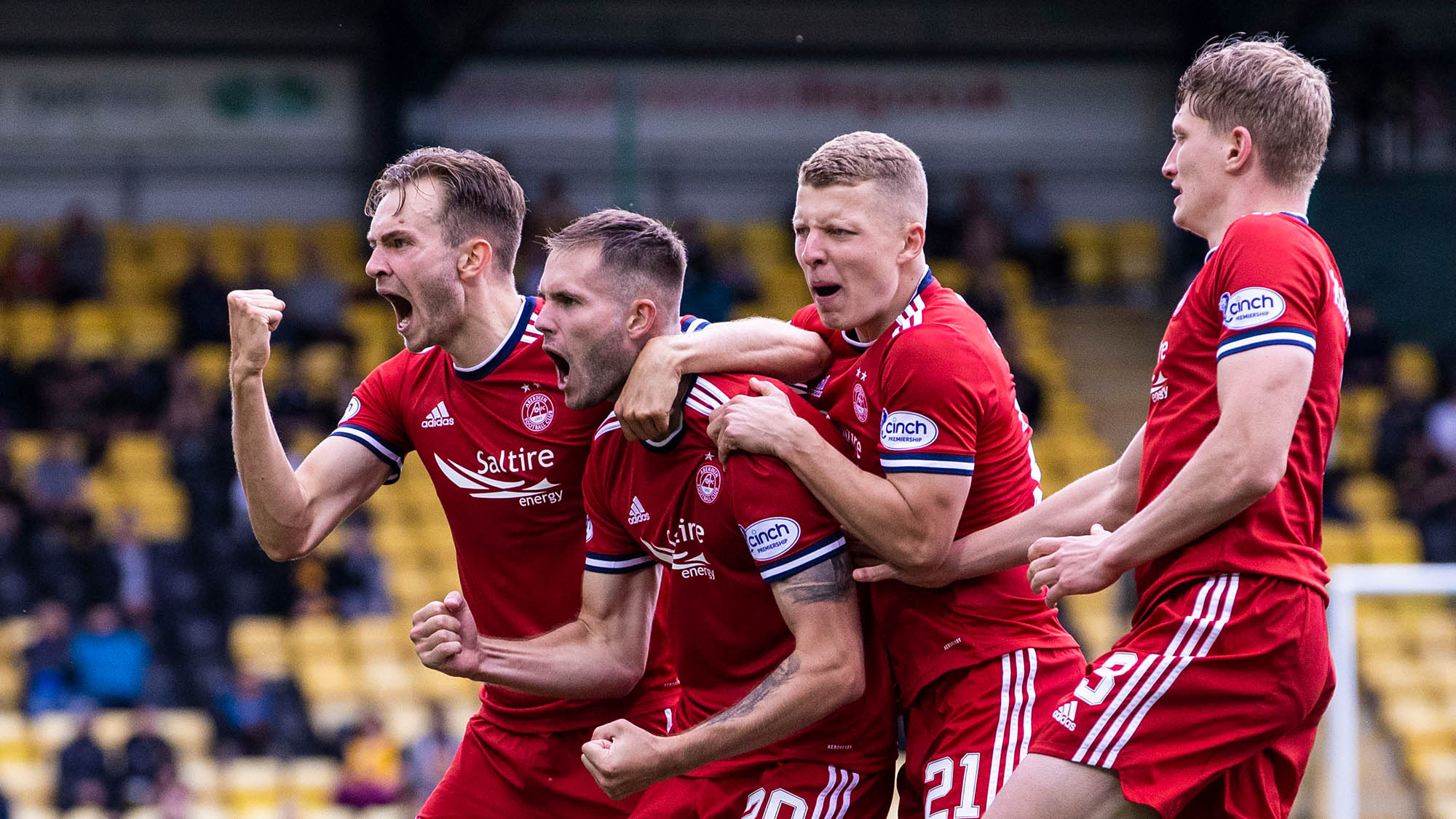 First goals for Teddy Jenks and Jack MacKenzie, deep into injury time, turned the game around as Aberdeen dug deep, then deeper still, to find the goals to maintain the impressive start to the new season.

Following Thursday’s gruelling trip to Reykjavik, Stephen Glass made six changes to the Aberdeen side for the visit to Livingston. Declan Gallagher, Jack Gurr and Teddy Jenks made their first starts for the club, Niall McGinn saw his first action of the new season, Ryan Hedges and Dylan McGeouch also starting. Scott Brown, Ross McCrorie, Calvin Ramsay, Funso Ojo and Christian Ramirez all dropped to the bench with Lewis Ferguson also missing out. Ojo was then injured in the warm-up and was replaced among the subs by Dean Campbell.

Livingston lost their opening day fixture 3-0 at Ibrox and made two changes for this game, skipper Nicky Devlin and Jackson Longridge returning at the expense of full-backs Jack McMillan and Adam Lewis. Neither featured on Livi’s five man bench.

Back in front of the travelling Red Army at last, it was the home side who had the first clear chance just three minutes in. Penrice fired the ball in from their left to Pittman but from just three yards out, he poked the ball wide at the near post, a real escape.

From there, the Dons began to dominate possession with Livingston dropping deep into their own half, defending in numbers. Hedges had Aberdeen’s first look at goal, stepping inside and slashing a shot across the face of goal and just over in the 14th minute after good approach work by Jenks and Jay Emmanuel-Thomas.

It was anything but the entertaining game that we’ve become used to this season, but Aberdeen were patiently plugging away and starting to ask questions. Livi were starting to feel the threat and on 26 minutes, Sibbald got the game’s first booking for a blatant pull on Jack MacKenzie’s shirt. A minute later, Sibbald got Anderson in behind but he could only produce a weak effort that dribbled wide of Joe Lewis’ goal.

There was a lovely first touch from Gurr on 29 minutes that got him away to the by-line, taking the ball down and getting away from his marker, but his cut-back into the box found no takers.

Lewis was absolutely livid with McGinn and Hedges on 34 minutes after the ball was given away too easily in midfield, Livi using the opportunity to open up the Dons, Lewis forced into a terrific save at the near post from Longridge. Aberdeen looked to have dealt with Sibbald’s corner with Emmanuel-Thomas heading clear, but Penrice was free to loop it back into the box. The Dons defence was looking for an offside flag but none came and Anderson was able to get to the ball first and nudge his back header over Lewis and in.

Pittman could have doubled the lead on 40 minutes, a quick break from Livi putting Aberdeen in trouble again, Longridge finding Anderson who squared for Pittman. From the edge of the box, he got no real power on the shot and Lewis saved comfortably.

Jonny Hayes took a whack on the left foot on 42 minutes and that was the end of his afternoon, Brown replacing him as a disappointing first half came to its close.

Two minutes into the second half and suddenly, it was a different game. The Dons kept lovely, patient possession down their left hand side before McGinn centred. Emmanuel-Thomas caused confusion in the six yard box, leading to a weak clearance to the edge of the box. Jenks was waiting there and absolutely creamed his first-time drive just inside the post from 20 yards to level things up.

The Dons were alive now, playing with purpose and beginning to really worry the hosts, Penrice taking a hack at Hedges on 52 minutes to pick up a yellow card. A minute later, there was more panic in the home box, Gallagher winning a header at the back post, Livi just about able to scramble the ball away to safety.

Sibbald was lucky to escape a second booking for a terrible late lunge on MacKenzie on 56 minutes, probably the worst challenge in the game to that point. The hosts were becoming frustrated with the way the game had turned and the foul count was mounting as a result. Wisely, David Martindale replaced Sibbald with Hamilton on 59 minutes.

Aberdeen were very much on top now, moving the ball around much quicker than in the first half. Even so, on 63 minutes, Ramirez joined the fray, replacing McGinn as the Dons looked to force home that second half ascendancy. The referee was back over to the touchline a minute later to book David Martindale.

For all that, Livingston might have been ahead on 66 minutes, Emmanuel-Thomas losing possession and the home side slicing forward, Considine able to come across and deny Hamilton a clear shot at goal, the substitute dragging his effort wide. Livingston then withdrew Forrest, bringing on Kelly.

Aberdeen threatened from a 71st minute flag kick, Gallagher winning the header to cause chaos in the home penalty area, but the ball was eventually half scrambled away, Hedges eventually getting in a shot that squirted wide.

Following that, Reilly replaced Anderson on 72 minutes in Livingston’s final change. MacKenzie continued to be in the wars, Devlin going through him from behind on 80 minutes to collect another booking. Livi’s assistant Marvin Bartley added to the referee’s post-match admin duties by getting carded four minutes later.

Ramsay replaced the injured Gurr with three minutes to go as Aberdeen looked for one last chance to win all three points. There was time for yet another booking, Pittman lunging into Brown in added time.

That seemed to be that but in the fourth minute of added time, MacKenzie bought a ticket and won the raffle. Coming inside onto his right foot, the shot from 20 yards out looked to be straight down Stryjek’s throat. It was but somehow, the goalkeeper contrived to let it slip through his fingers and into the net. The travelling Red Army poured out of the stands in celebration, 18 months of frustration boiling over into one joyous moment.

The people on the pitch? They thought it was all over. It was.