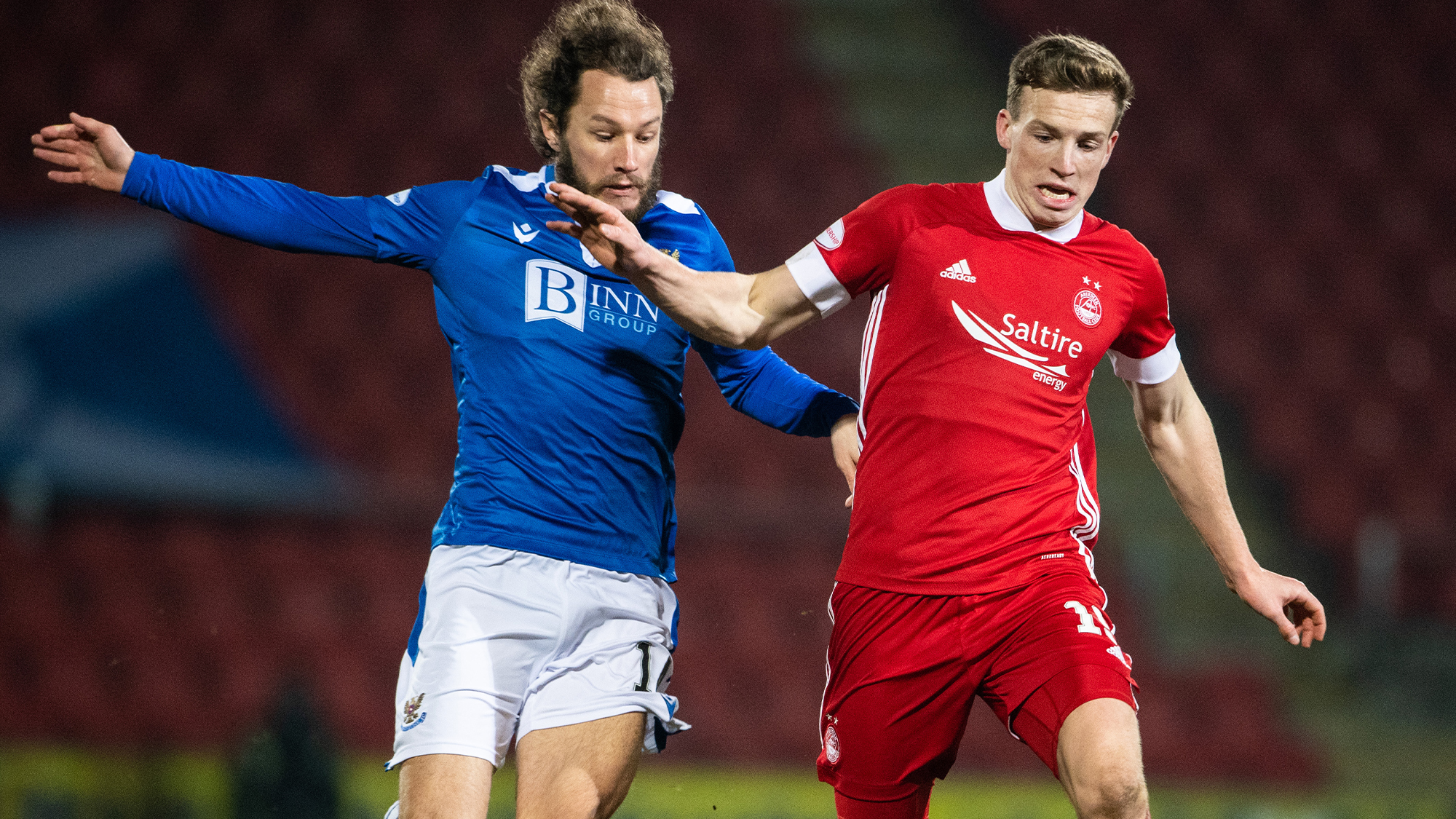 Paul Sheerin previewed the first of our post split fixtures this lunchtime with the media, via Zoom.

“Now we are beginning our post-split fixtures, it is a case of viewing it as a mini league and trying to win as many games as possible and seeing where it takes us. We will take each game as it comes. We will relax and try to enjoy our football.

“The new manager hasn’t been overly involved in the preparation for this game. I have had a couple of conversations with him but in terms of training he has been more than happy to leave us to it. We film training so he has been able to see that, and he has been able to see what we have been doing. He has not had any concerns or flagged anything up in our training methods. From that point of view, it looks like he has been happy with our training methods and he has not been overly involved in terms of team decisions ahead of Saturday. 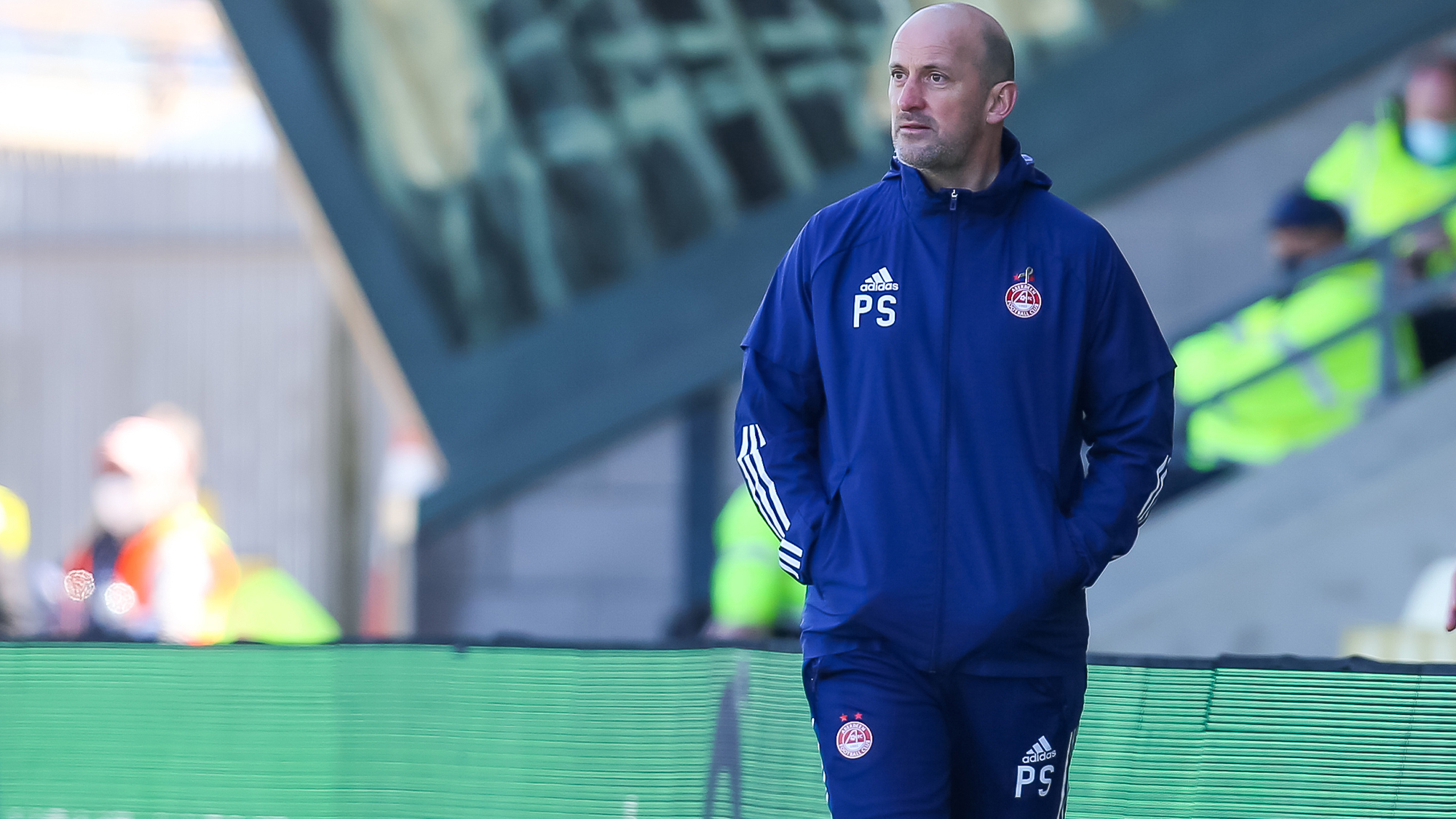 “Positivity will come through getting a win. We know how tough it will be going to McDiarmid Park, they are usually stuffy affairs. If we can pick up three points it would be a nice platform for the manager coming in. We have prepared in that manner and fingers crossed it will bear fruit on Saturday.

“We would love to see fans back in before the end of the season. Everyone agrees that it is a massive part of the game, we would all love to see it and the atmosphere that they generate. It has to be done in the correct manner and making sure that everyone is safe and healthy. It is positive to have the news of the crowds returning for the Euros and if we could be involved in some pilot games leading up to that then it would be excellent news for all involved.

“We ran the pilot game against Kilmarnock extremely well and there were no issues with it. The fact that we have done that already and have been through process it may help us with that opportunity. Time will tell on that, but I am sure most clubs would like to be a part of that. 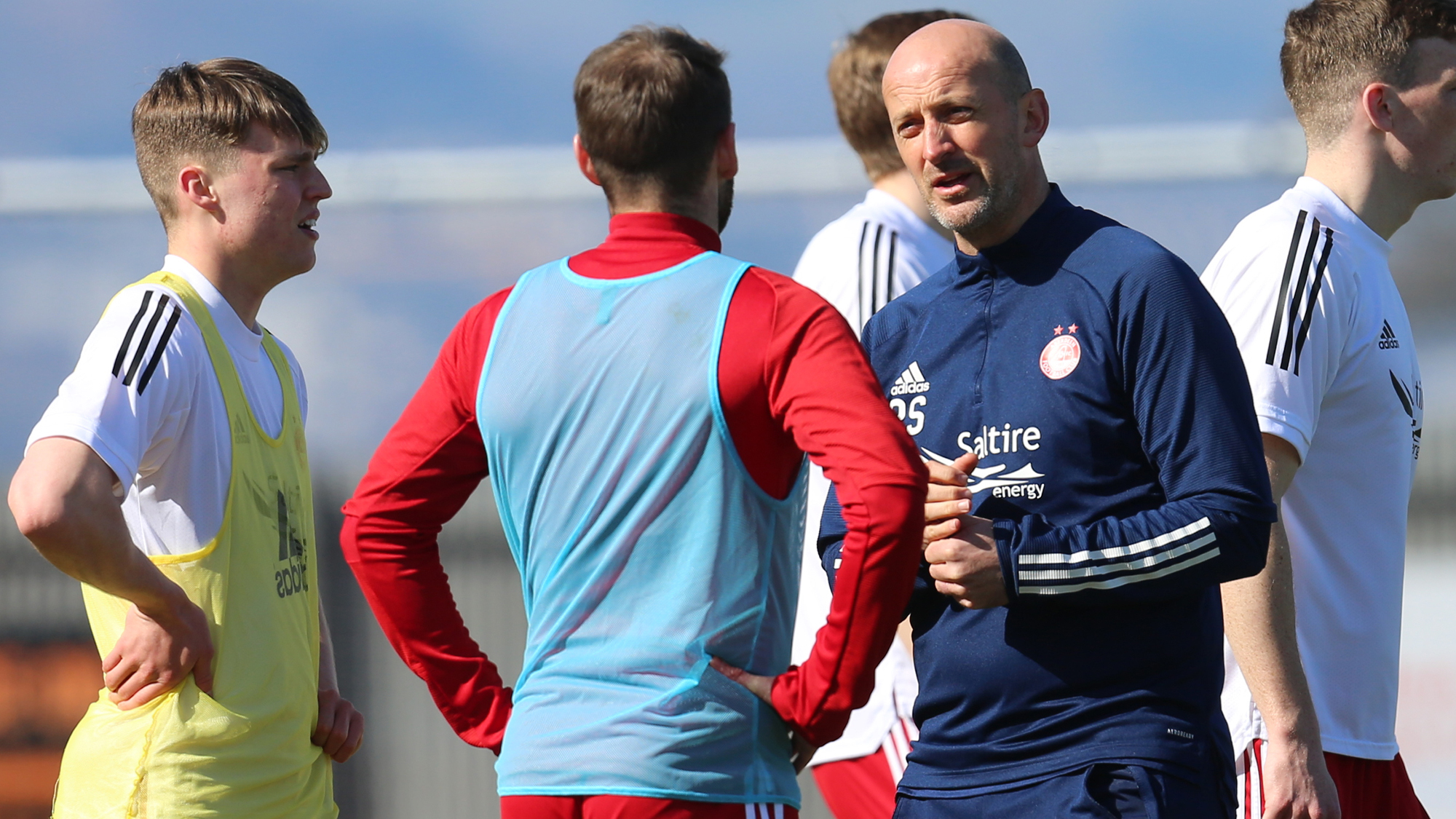 “Against Dumbarton if we had got an early goal, it would have changed their game plan and they would have had to open up a bit more than they would have liked to. That was the case when we scored, and they have to come after you a bit and it allows more space in behind. If we had done that earlier, it may have opened the game up a little bit which would have suited us a bit more.

“Saturday is a bit different as they are always cagey games with St Johnstone. We know if we can look after ourselves at the back, which we have done so well with this season, then when opportunities do arise, we must make sure we are clinical with them.

“I don’t know what my role will be when Stephen comes in. I have had assurances that there will be a role for me at the club, whatever that is time will tell. I will do my all and continue to do the best I can for Aberdeen. It is a difficult one at the moment as he is bringing in his own staff. I am here to help in any capacity that Stephen wants me in, wherever that is in my previous role or a role closer to the first team, either way I will be prepared to work for him.” 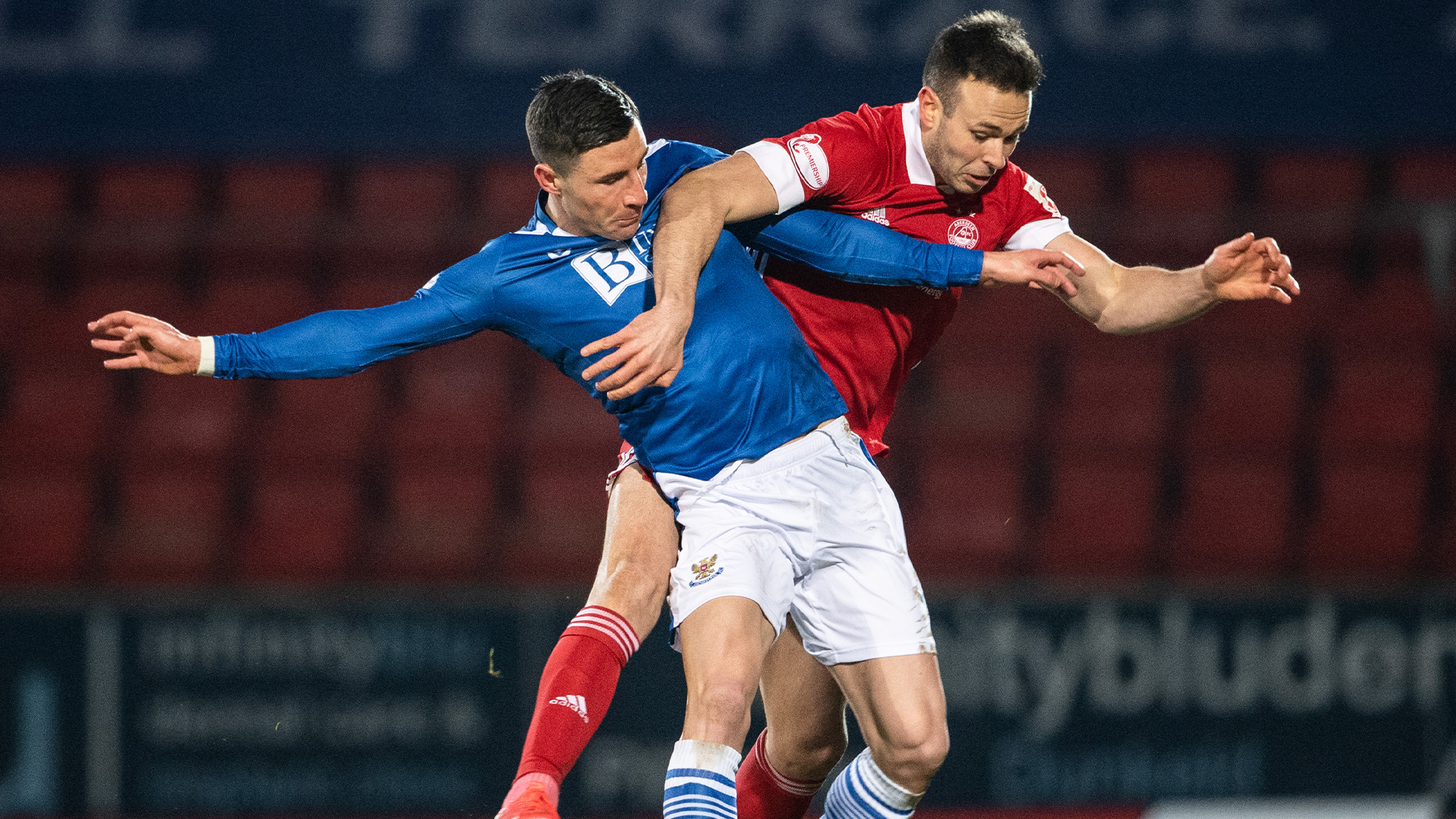 We are unbeaten so far this season against Callum Davidson’s side with two victories and a draw. Ryan Hedges’ late goal was the difference between the two sides back in August and goals from Sam Cosgrove (penalty) and Ash Taylor gave us the three points when we met the Perth side on Boxing Day after Liam Gordon had handed the away side the lead. Our third meeting came in January where it finished goalless at McDiarmid Park. 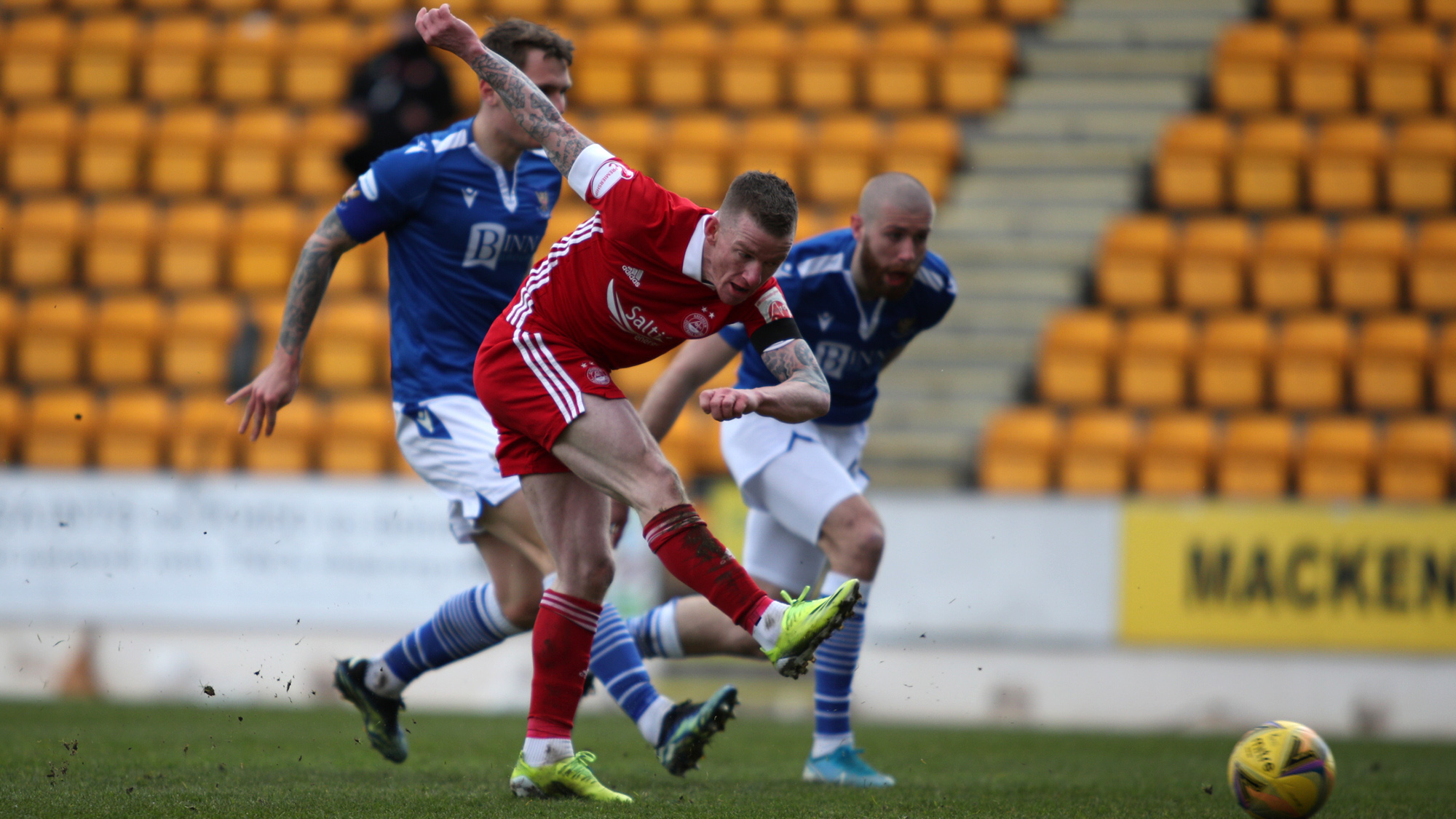 It was a game of two halves in Perth, the Dons producing a much better performance after the break to secure a 1-0 win and close the gap on Hibs to four points.

Paul Sheerin made two changes to the team that beat Dumbarton 1-0 in the Scottish Cup last weekend. Jack MacKenzie returned to the side after being cup-tied, along with Matty Kennedy. Calvin Ramsay and Ethan Ross made way and started from the bench, as did the returning Fraser Hornby. On loan Callum Hendry missed out as he was not eligible to play against his parent club.

There were four changes from the St Johnstone side that won 1-0 in their Scottish Cup tie at Dundee. In came Craig Bryson, Glenn Middleton, Chris Kane and Craig Conway, replacing Liam Craig, David Wotherspoon, Guy Melamed and Stevie May who all dropped to the bench.

A quick break from the hosts put Aberdeen under pressure in the third minute, Tommie Hoban getting an important block on a Middleton shot to avert the danger. Two minutes later, Dean Campbell tracked back brilliantly to take the ball off Conway as he looked to be clean through on goal.

Kane then put Joe Lewis under pressure in the ninth minute as he had the ball at his feet but he was able to scramble the ball away. It was a high octane start from the Saints and in the 12th minute, Kane blazed over the bar from 10 yards out when it looked easier to score following a free-kick.

Gradually though the Dons played themselves back into the game, despite Andrew Considine collecting a yellow card in the 23rd minute to bring a Saints counter-attack to an end.

Aberdeen’s first corner was won in the 25th minute, Niall McGinn delivering it onto Hoban’s head, but a deflection helped take it wide of goal. Kerr had a similar chance from a 33rd minute corner at the other end but he put his header wide too.

At the break, Hornby replaced Flo Kamberi as the Dons looked for the ball to stick better up front. Three minutes in, a McGinn corner caused trouble, Clark clawing the ball away under the bar. Recycling the ball, McGinn speared it into the near post, just in front of Hornby.

The positive start to the half was continued when Jonny Hayes slotted the Dons into the lead on 52 minutes. Kennedy played a neat through ball through the middle, Hayes accelerating away from two defenders and maintaining his composure in the box to poke the ball past Clark and in.

McGinn was the second man in the book as Saints tried to break on Aberdeen on the hour, but it was much better from the Dons in the second period, pushing Saints back into their own territory. It should have been 2-0 in the 68th minute, good play from Aberdeen down the right culminating in McGinn standing up a cross to the back post where Hornby put his header into the side netting, a great chance.

May and Wotherspoon replaced Middleton and Kane in the 70th minute, a measure of the Dons’ control of the game, Saints desperately looking to change the direction of things. Aberdeen responded, bringing on Ramsay and Connor McLennan for Kennedy and McGinn in the 76th minute.

It was Saints who had the next opportunity in front of goal, May helping on a cross to Rooney at the back post. He got in front of MacKenzie and Hayes to win a good header but fortunately, it smacked against the post and bounced away to safety. Melamed and Tanser then joined the fray in the 79th minute, Bryson and Booth replaced.

Rooney caused problems again as Saints rallied in the 80th minute, dashing into the box at inside-right, squaring the ball into the six-yard box, Hoban stretching to clear in front of May. O’Halloran then became the final change for the hosts, on instead of Conway.

Lewis kept his side in front with a terrific save in the 89th minute, prolonged Saints pressure seeing the ball fall kindly at the feet of McCann. The. Goal was gaping for him on the edge of the six-yard box but Lewis flung himself to his right to keep the clean sheet intact and to see his side through to a vital victory, Ross replacing Hayes to run the clock down in the 93rd minute.