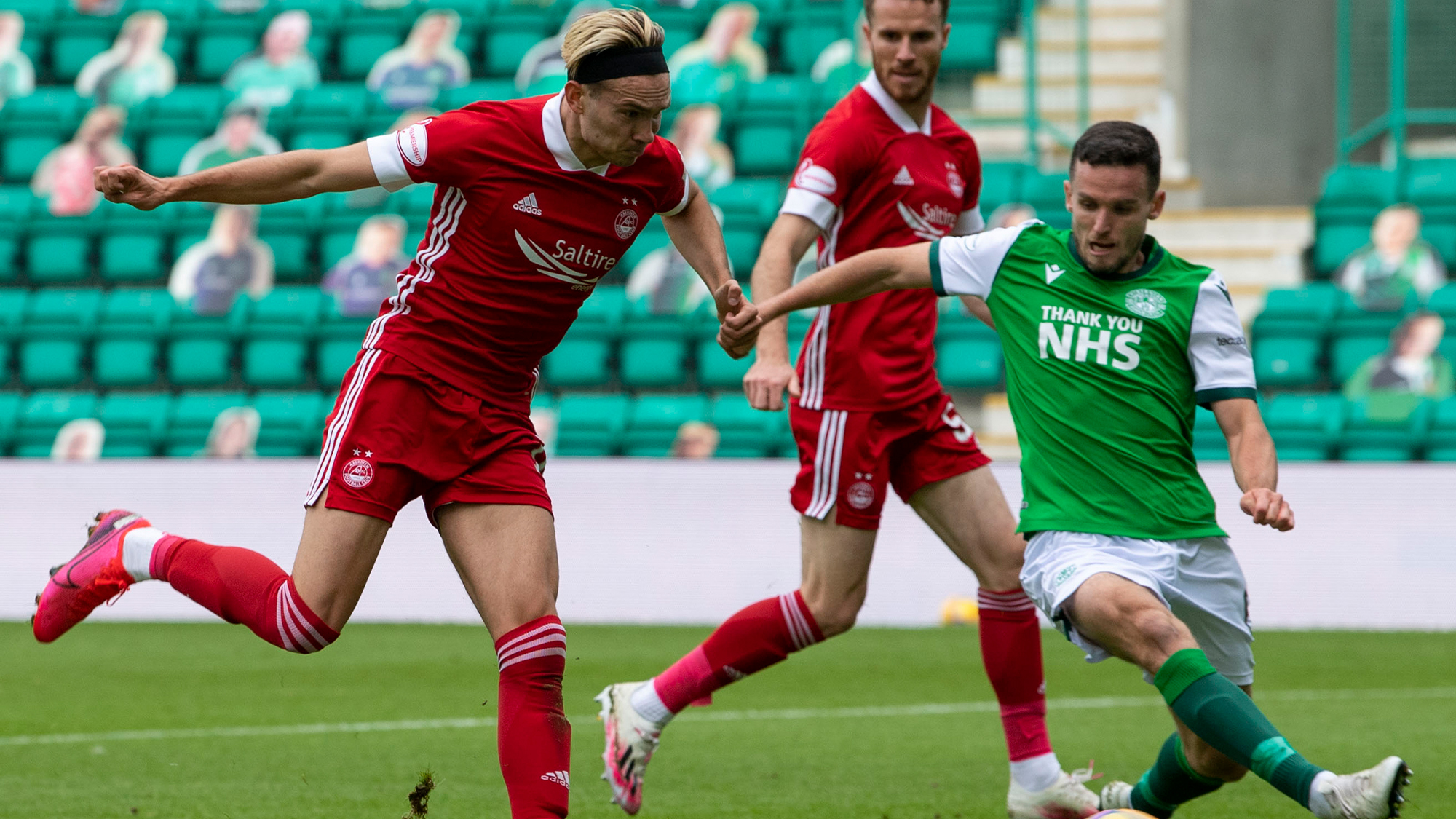 Stephen Glass sat down with the media, via Zoom, to preview our penultimate match of the season against Hibernian. 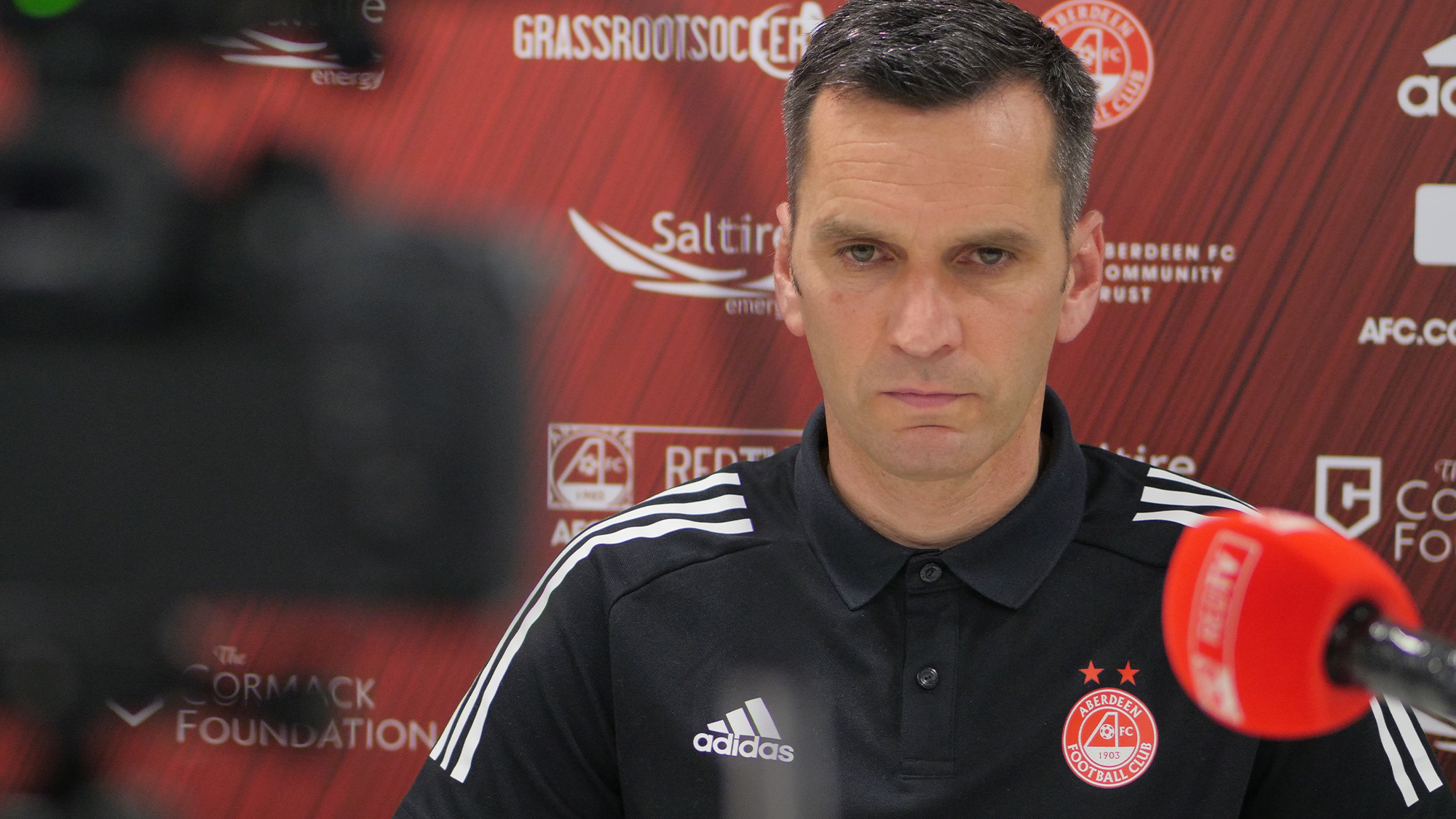 “We know what we need to do against Hibs. A point is not good enough, we need to win the game. We go into the game knowing what we need to do, knowing the challenge that Hibs pose but believing that we have the players and the plan to go and get the three points.

“I don’t have to tell the players how important games like this are. We plan to try to win every game. We try to look at weaknesses of the opposition. We are aware of the dangers that they pose so we plan for that as well. In that aspect nothing changes for us. If it was normal there would be a full house at Pittodrie. We know that there will be a lot of people watching us looking for a big performance. We are going to try and deliver that, we are going to try and win the game, that is always the aim. 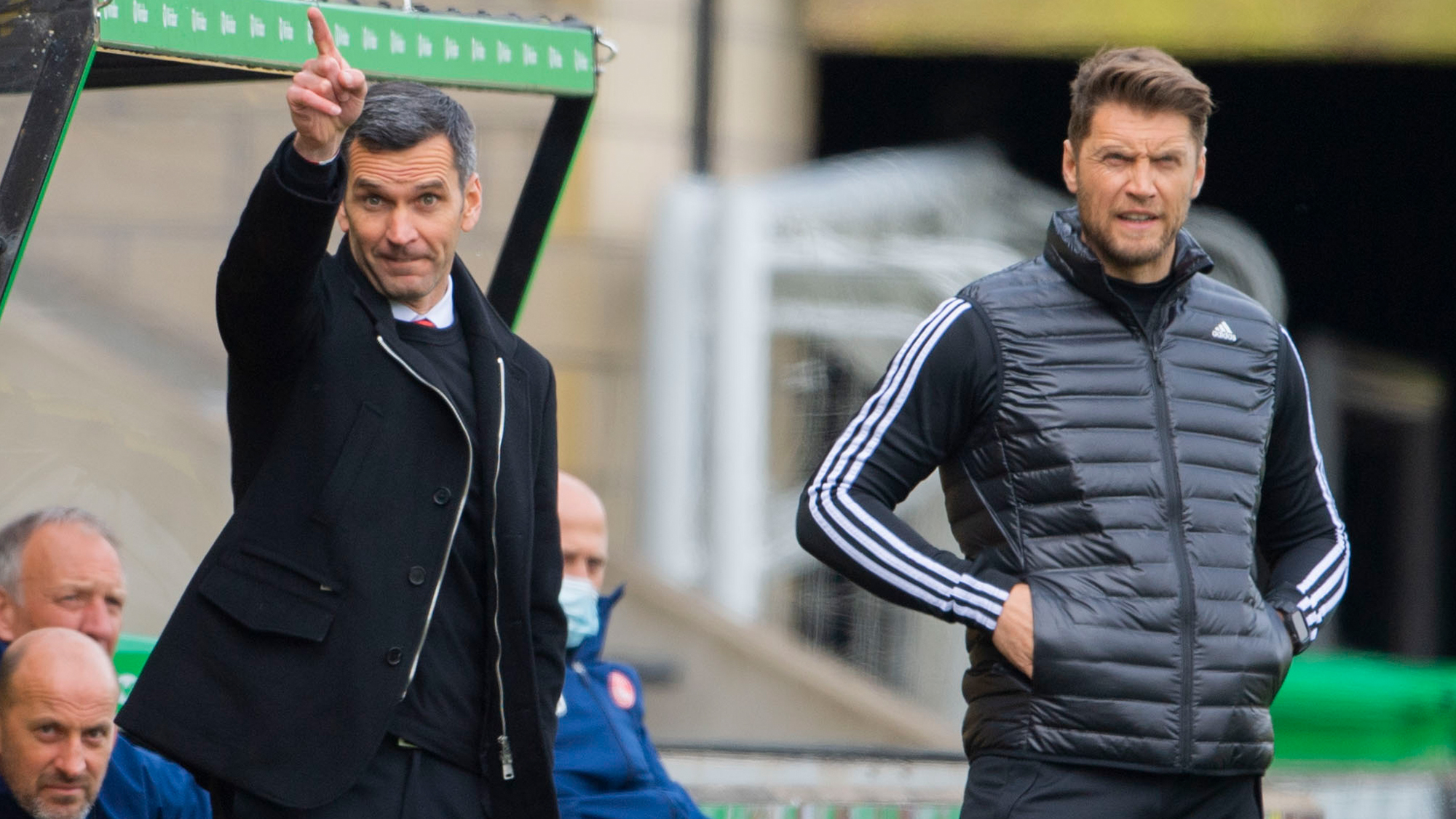 “We are looking forward to next season but the biggest thing for us is the game with Hibs on Wednesday. We want to go into Saturday with third place still a strong possibility. That is what we want to set up. Then we will start to deal with next year once this season is out of the way. What I would say is the response of the players since we came in has been unbelievable. Their work rate is top level. We are hoping to embrace that next year, push them a little bit further, give them a bit more quality and hopefully see a better team on the pitch.

“We are prepared for the game; we think we have got a plan to win. We might get tripped up on the night, but it won’t be for the want of trying. We are as prepared as we can be, and I think you will see an energetic performance from a hungry group of players.

“Dylan was excellent against Livingston. He has waited his turn a long time because Dean has done well. We have got good competition in the team. When the players earn opportunities to play through training and they cement that place in the games, then they warrant their place in the team. Dylan was fantastic last week. I have got a choice for this week with their being two games. Dean hasn’t been poor, but Dylan deserved his opportunity. It gives me a problem with the two games coming up. 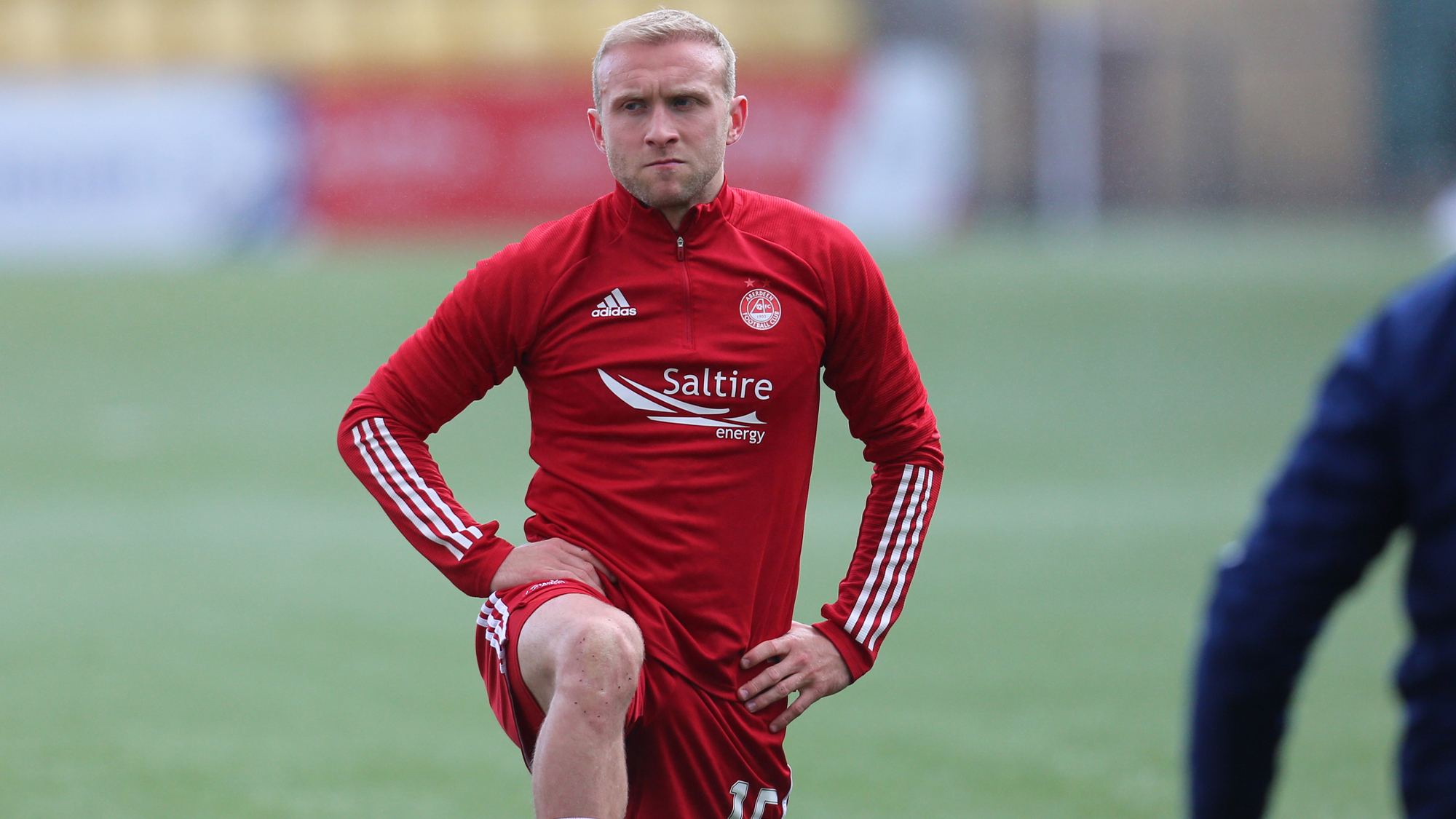 Time on the Training Pitch

“It was good to get onto the training pitch with the players this week. The reason for the break that we had we would have certainly not have rather have had it. There were two cup semi-finals on at the weekend and we wish that we were playing in those size of games. It will be the same for cup final weekend.

“You deal with what you have got. We had a training week that we planned on not having and we were able to put some different things into the players and prepare them for this game. 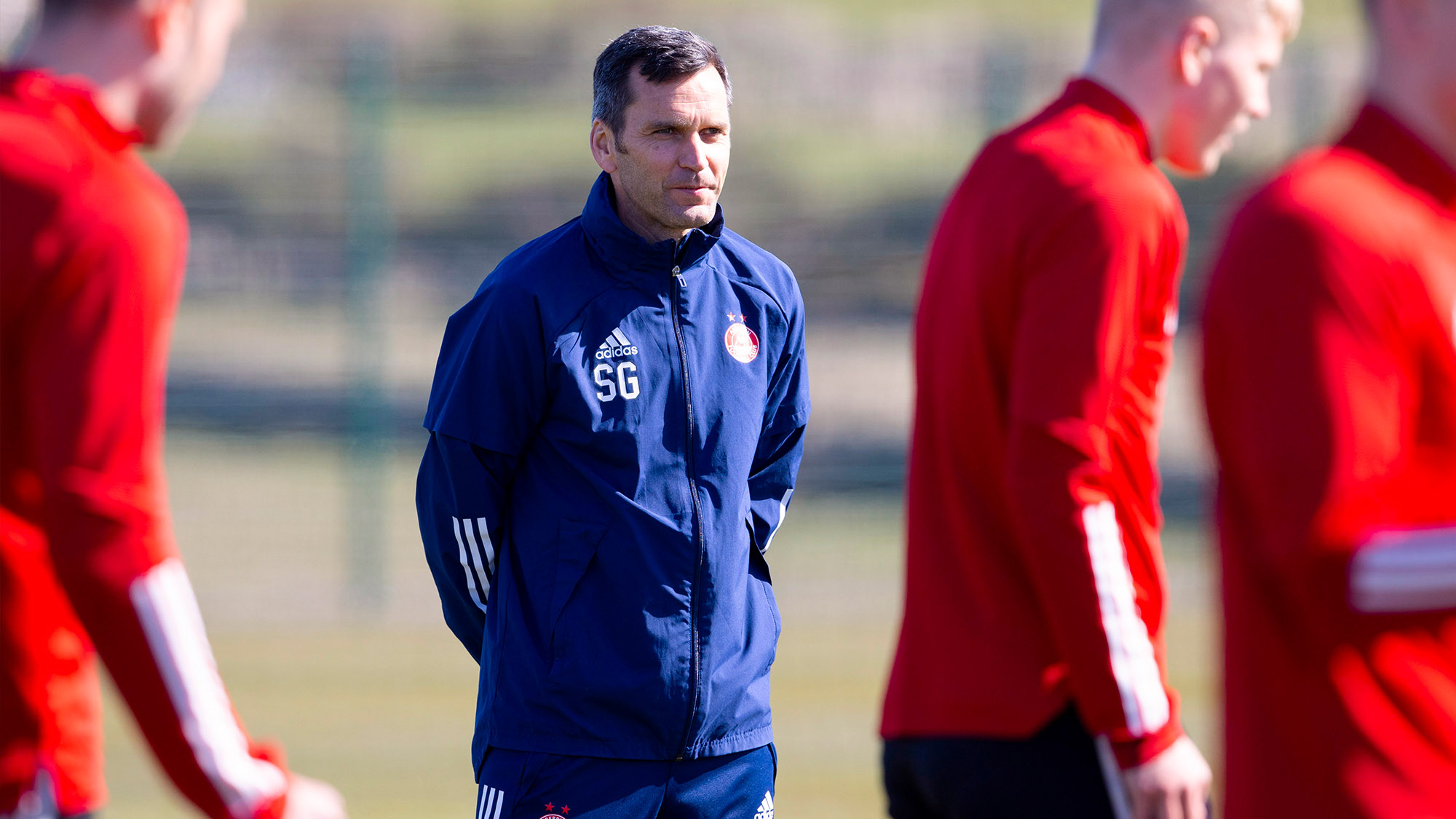 “We have done everything above board from start to finish. Anytime you lose a player to a pre contract you are not happy because you want them to stay at your club. Every club in Scotland does it and every club in Scotland announces it when pen is put to paper and the other club is informed. Motherwell themselves have a track record of doing it, ironically enough when they signed Declan from Livingston a couple of years ago. I don’t see an issue from this end, we were very respectful from start to finish and we continue to be.

“With the type of injury Ryan had and the time that he was out, his impact might come more off of the bench, but we will see. If he feels good, we might push him but in reality, it will probably be to use his impact late on where he can use his pace to change the game. He is itching to play, and it is great to have him back. 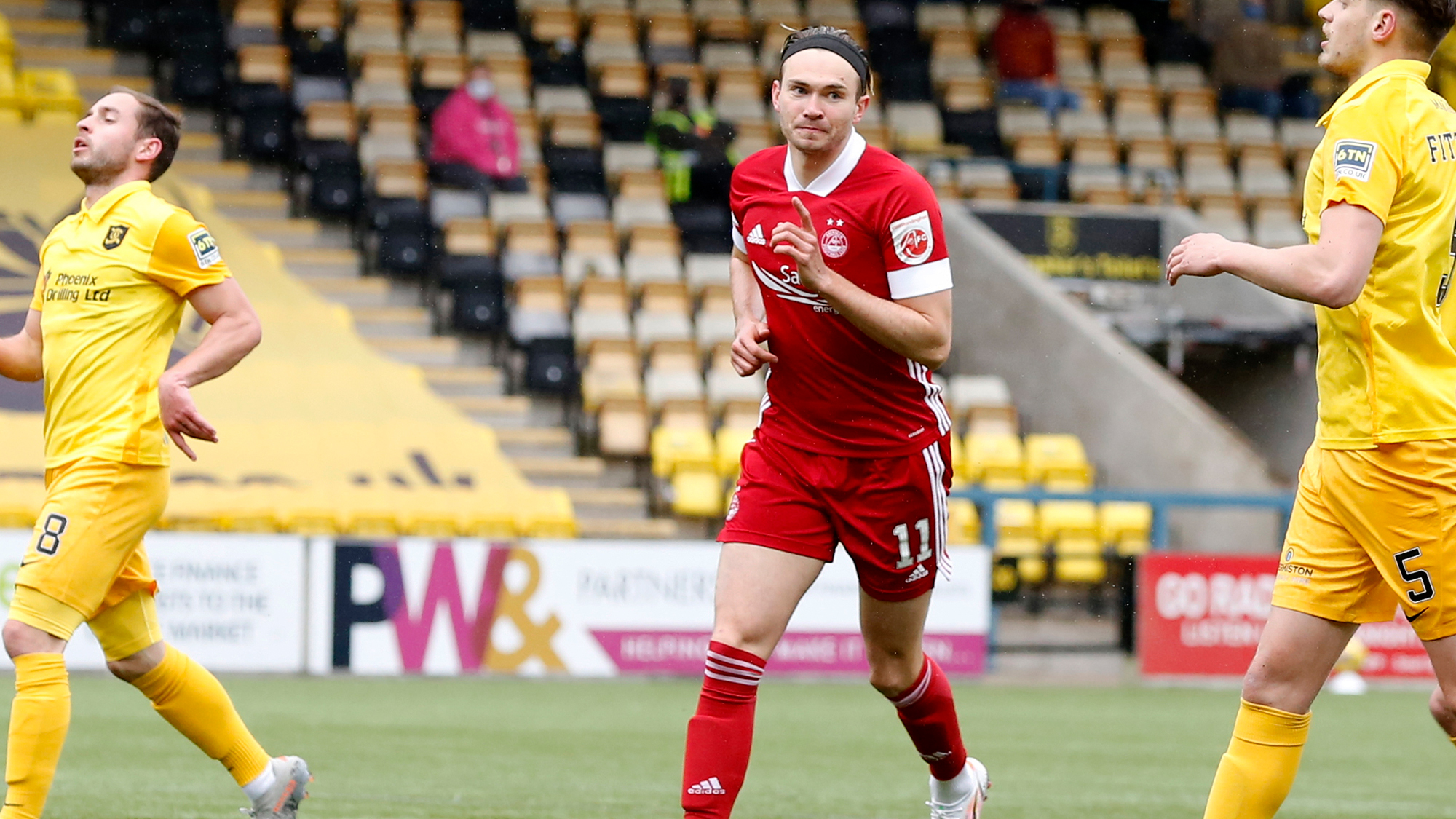 “We are hoping to attract a player of a certain calibre and we have shown that we can do it already. If it continues great, if not we make the ones that we have got as good as we can to prepare them for the challenge of next year so that we can do what we want to do as a club.

“We need to add a centre forward, that is no secret. We will continue to strengthen where we can. We also have a very good group of players here. Some of the young ones have proved their worth. Jack MacKenzie has come in and looks like he is going to stick in the team. Calvin Ramsay has come in and done well. Campbell and Ferguson are both still young. There is a really good crop of players at the club as well as the experienced players. It is important that we don’t get caught up talking about what we can bring in at the club it is also about what we can keep at the club. There is a great base here. 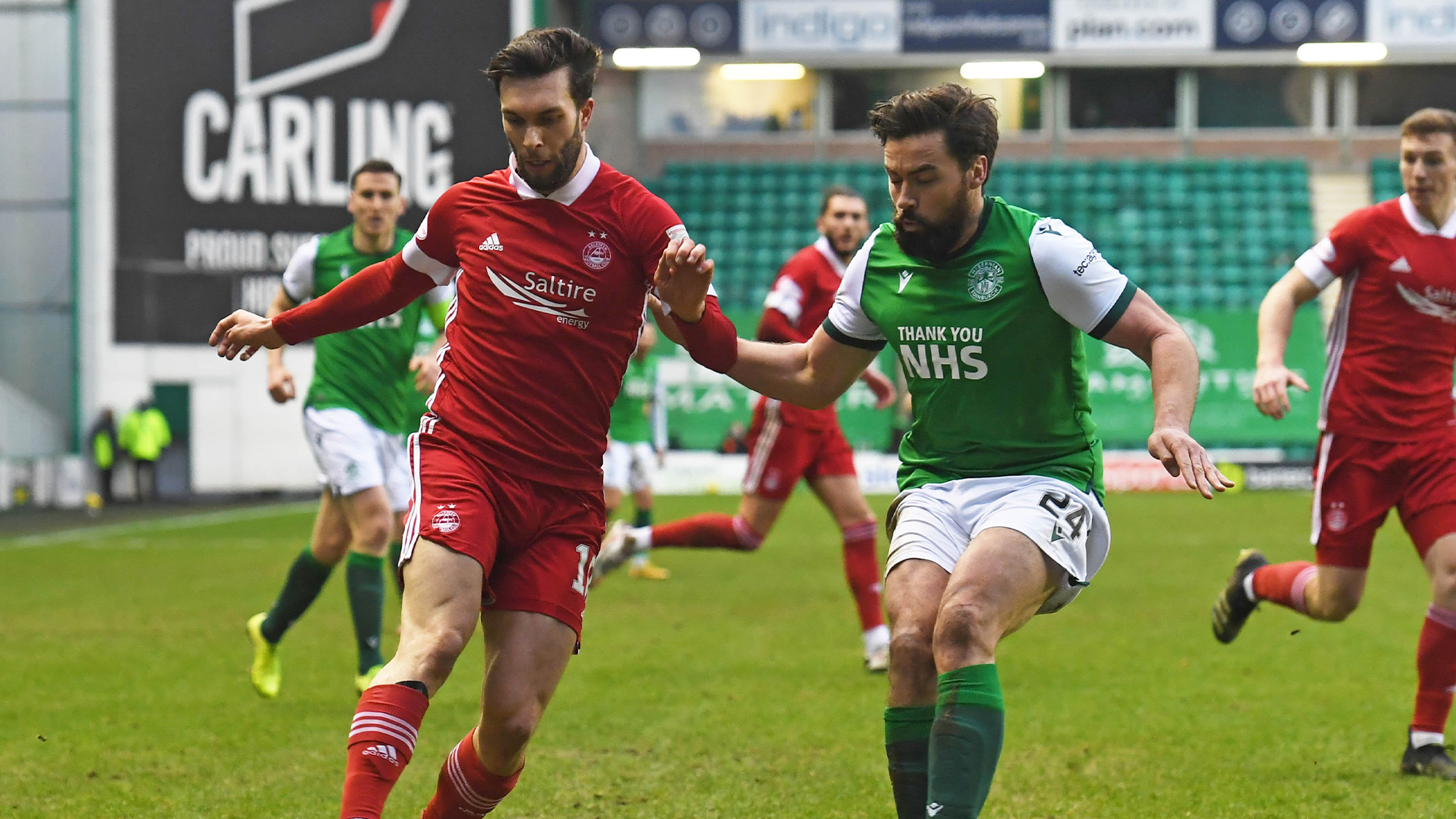 Last Five Games Between The Sides at Pittodrie

We have won two and lost one of our encounters with Jack Ross’ side this season. A first half penalty from Lewis Ferguson was enough to hand us the three points back in August at Easter Road and goals from Scott Wright and Sam Cosgrove gave us a 2-0 victory in the reverse fixture in November. Hibs won by the same score line in February’s match at Easter Road with Martin Boyle grabbing both the goals on a disappointing afternoon for The Dons. 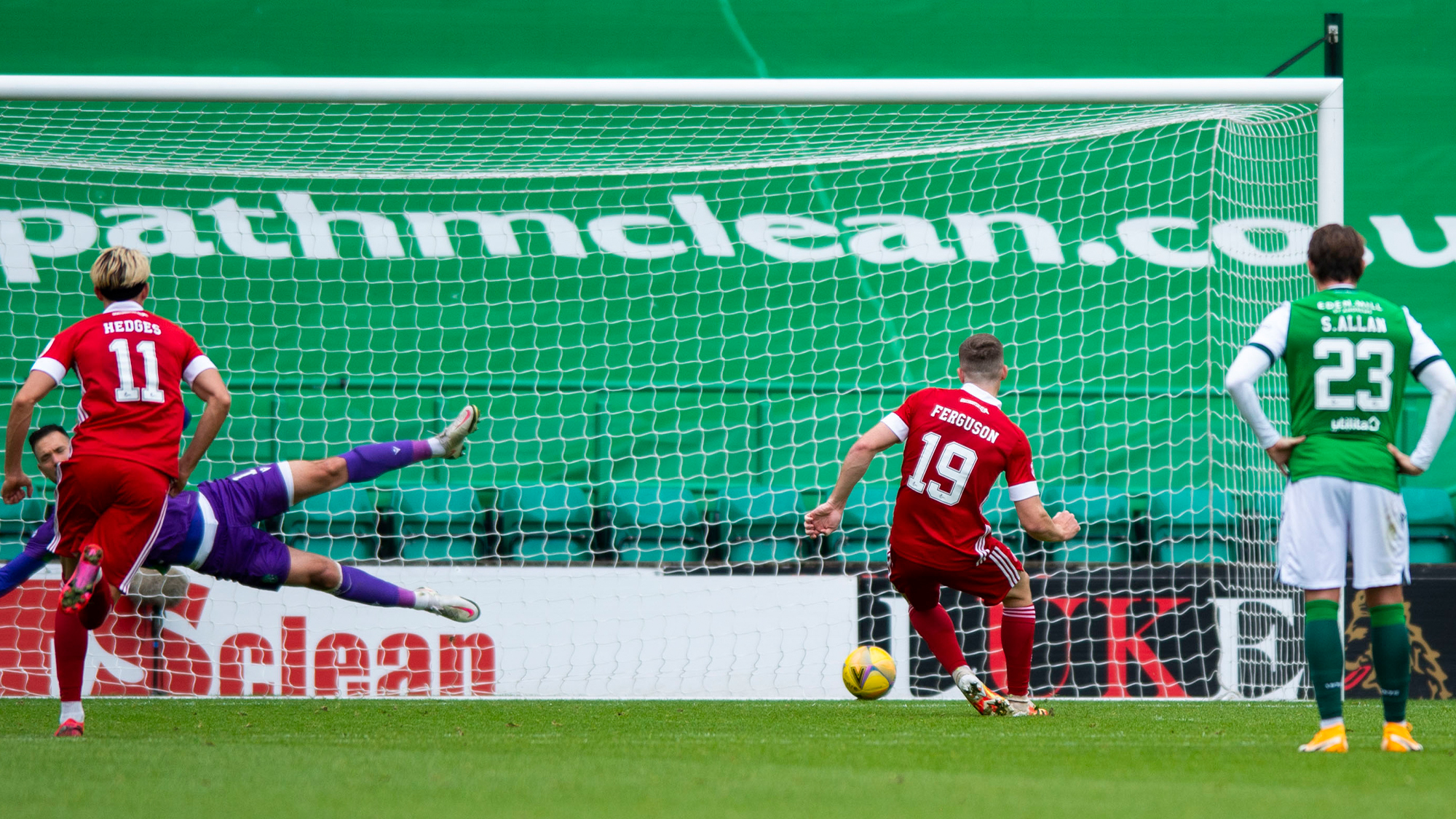 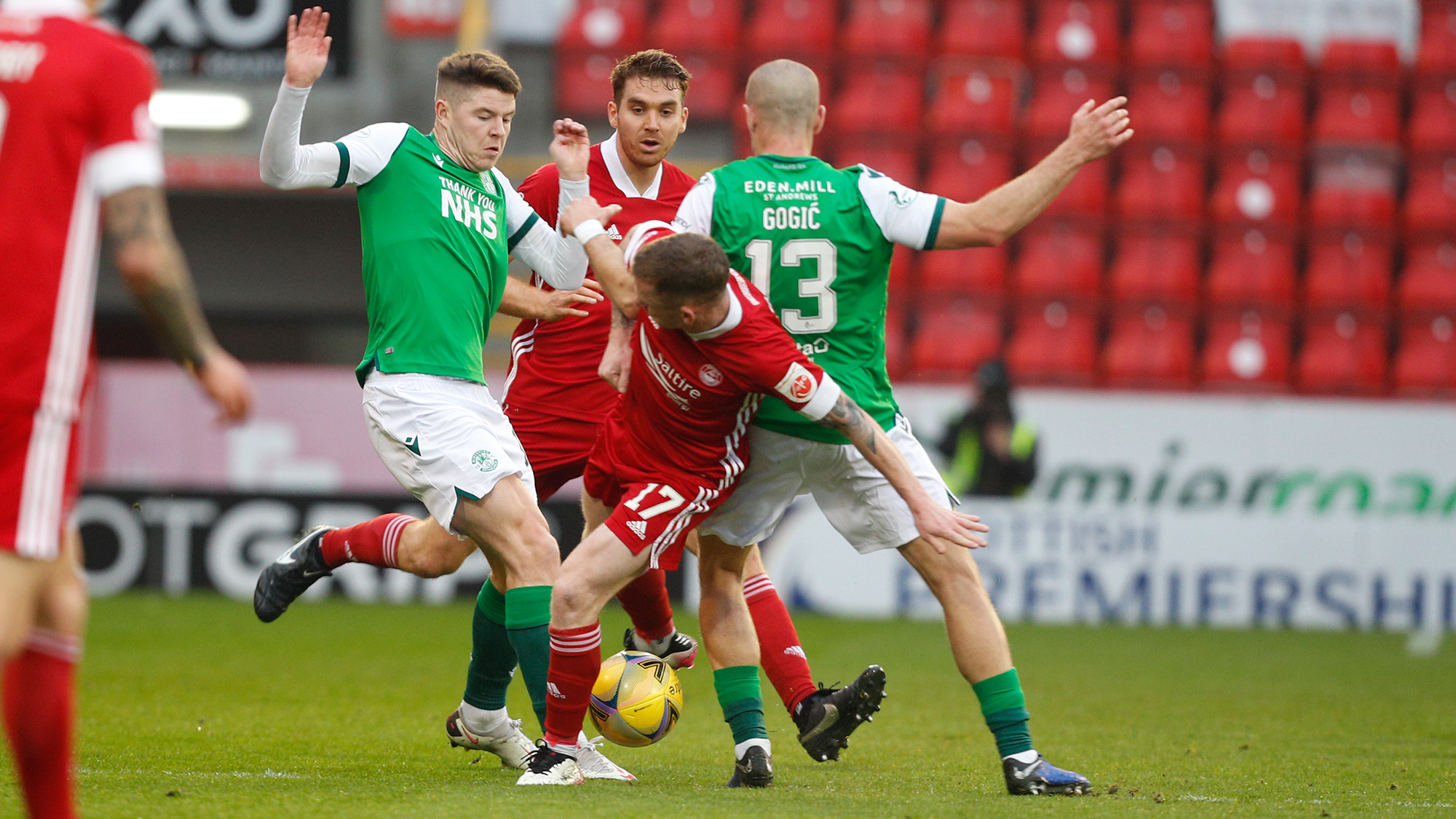 A low-key game, where the two sides essentially cancelled each other out, saw Aberdeen slip to a 1-0 defeat with Hibs deservedly sealing third place in the league with a game to spare. Once again the home side failed to take the chances that did come along, the story of a season that will see them finish fourth.

There was just the one change to the Dons side that won 1-0 at Livingston at the start of May, Niall McGinn dropping to the subs bench to make way for fit again Ryan Hedges, who scored after coming on as a sub in that game.

Hibernian made two changes from the side that beat Dundee United 2-0 in the Scottish Cup semi-final on Saturday. Darren McGregor and Alexander Gogic came into the starting XI in place of Ryan Porteous and Joe Newell, who both started from the bench.

Good play from Hayes and McLennan created the first half chance of the evening, Hendry not getting enough power on his fourth minute header to trouble Macey. Good control and then clever feet from Kamberi won Aberdeen their first corner in the 11th minute. From Hedges’ ball in from the left, Hoban won the header, powering it down into the ground, Ferguson trying to turn it over the line as it bounced up – while perhaps being impeded – Macey collecting comfortably.

A training ground corner followed in the 15th minute, McGeouch drilling the ball along the ground, Kamberi letting it run, Hoban scooping his shot high into the air. From there, the Dons enjoyed a good spell with plenty of possession but the hosts couldn’t find that crucial final pass to open up a well organised Hibs in the final third.

For the first time Hibs threatened in the 34th minute, McGinn firing a shot in from 30 yards, McGeouch coming across to get a deflection on it, the ball flying over the bar to safety. The Edinburgh side had slowly worked their way into the game with possession far more even by this stage.

The best chance of the half came on 39 minutes, Kamberi and Hayes combining well down the left. Kamberi’s low ball, cut back to the edge of the box, found Hedges who didn’t get a clean connection on it but it fell perfectly for Hendry eight yards out but he got under his shot and put it over the bar.

When a chance fell Hibs’ way, Doidge made no mistake with it two minutes later. A diagonal ball from McGregor found Doig on the left wing.

He nodded the ball back inside, Irvine helping it on to Doidge and as the ball sat up nicely for him, he produced a clinical finish from the edge of the box, the ball flashing past Woods.

Ferguson produced a very useful flick header from a dozen yards out that forced Macey into a save on the brink of half-time, McLennan slinging in a good cross from the right. In the final minute an inviting cross from Kamberi on the left but Hendry and McLennan could not get a touch.

Hibs made a quick start and should have doubled the lead on 47 minutes, Irvine receiving the ball at the back post from a Boyle cross. Chesting it down, he created space to poke goalwards, his effort clipping the top of the bar, a real let off for the Dons.

Intricate play for Aberdeen created an opening for Hedges who wriggled himself into space in the 52nd minute but he fired his shot into the side netting, some good, patient passing play opening Hibs up. Hayes then had to give up the ghost and was replaced by Kennedy while for Hibs, Hallberg was also replaced in the 53rd minute, Magennis coming on.

Kamberi had a real opportunity on 57 minutes after terrific play by McLennan, Hedges and Hendry in particular, bustling through a couple of challenges, but from 20 yards, Kamberi sliced wide of goal. Boyle caused more consternation at the opposite end four minutes later, driving a clever low ball through the Aberdeen box, though thankfully there were no takers for it.

Ferguson wasn’t far away on 62 minutes, Macey tipping his shot behind as the ball flashed across goal from 15 yards out, Hoban having found the midfielder from a half cleared corner. Hibs made a double change in the 66th minute, Stevenson and Murphy replacing Doig and Nisbet.

In truth after that the visitors look very solid in defence and saw out the came comfortably.

Aberdeen switched off at a free-kick in the 76th minute, giving Murphy the chance to get off a shot, Woods dealing with it well at the foot of the post. Moments later, Irvine swept an effort wide as they tried to hit on the counter-attack.

Into the last ten minutes and McGinn replaced Hedges for Aberdeen as they looked to find a goal. McGinn wasn’t far away within a couple of minutes, McLennan bending a ball into the near post, McGinn’s header flashing just wide of the target. Hornby then became Aberdeen’s last change, replacing Hendry in the 84th minute.

Ferguson got the game’s first booking for clipping Murphy’s heels in the 87th minute. Considine immediately followed him in for a late challenge on Boyle and Hibs’ McGinn was next to see yellow as the game edged into added time.