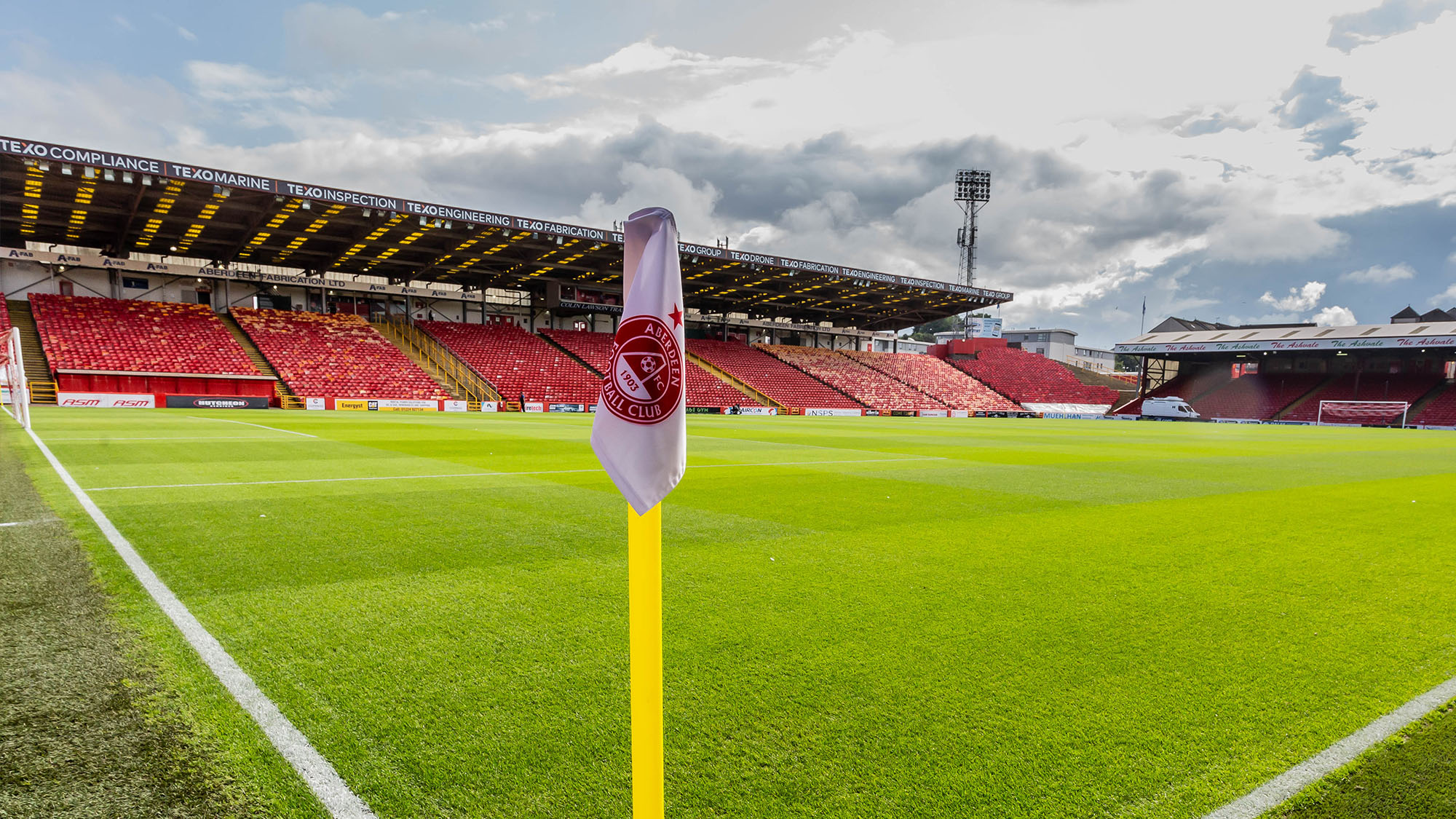 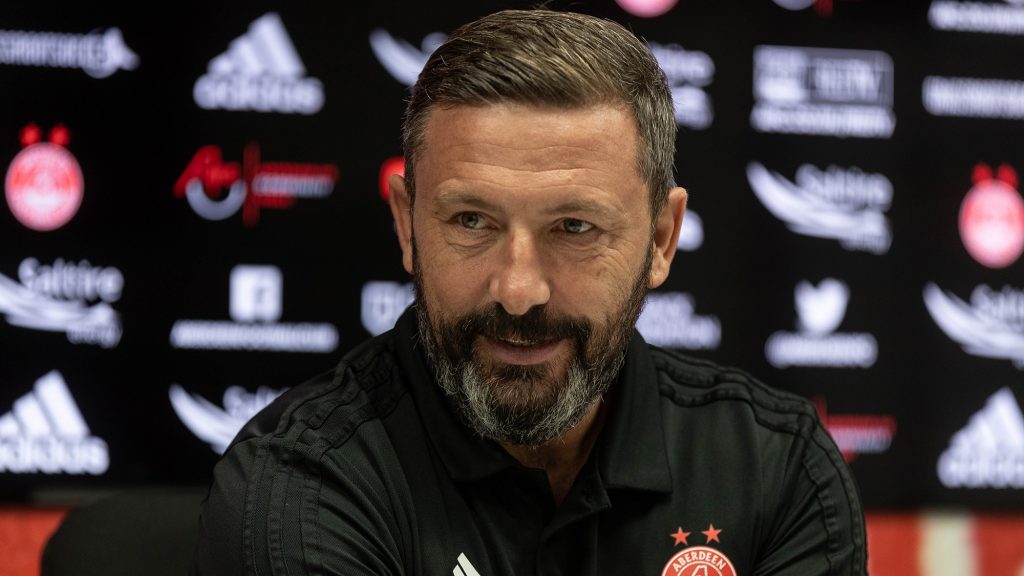 The manager spoke to the media this afternoon ahead of Saturday’s visit of Ross County.

“We were talking about Ross County up until last week about how well they have done.

“Stuart and Steven have done a brilliant job, I think last season in particular, winning the Challenge Cup, winning promotion all in their first full season in charge, they have done brilliant and it is good to see Ross County back in the Premiership.

“They have acquitted themselves very well, notably the result at Tynecastle, I watched that game and it was a very strong performance and they could have won it on the day.

“They have been very good up until last week and they will be disappointed with their home result against Livingston, they still show enough attacking threat in their game and I think that they will do well this year.

“We just want the team to settle down, knuckle down with performances.

“I think it has been a bit of a pattern for us apart from one season, where we had a real steady team, at this stage of the campaign we are still dealing with injuries, dealing with the circumstances of Europe, still trying to find out form and get that strongest team out there and a settled team.

“Normally when we come back after this international break, this is when we start to really knuckle down, so it is important that we go into that break with another three points and being at home hopefully helps us to achieve that.

“The pressure is never off Aberdeen, there is always a pressure to win, especially at home, I know more than most what is required here.

“We are looking forward to the challenge of winning three points and feeling a bit better about ourselves and looking at the league table, being a bit happier with that, knowing that there is improvement within us but we are looking to win the game.

“We need to remind folk that we won the cup tie at Dundee off the back of a European tie, we got a 0-0 at Kilmarnock and while it wasn’t good enough from my point of view and we still expect more, in isolation it isn’t the worst result in the world. 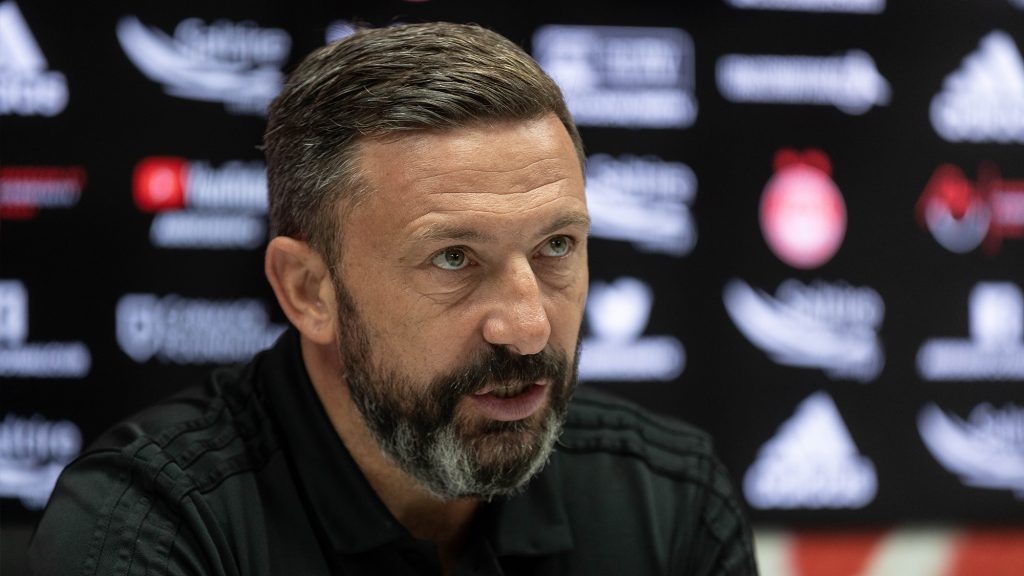 “I was frustrated at the weekend, I felt we never did enough in the attacking part of the team, I thought defensively we were fine, we had to deal with (Scott) McKenna going off and I thought we were safe and efficient with our midfield work.

“I wanted my full backs to be far more adventurous, far more aggressive with their work. I wanted my wide players to be more of a threat, I wanted (Sam) Cosgrove to make more impact in the game. So in those forward and wider areas we need to be doing more. 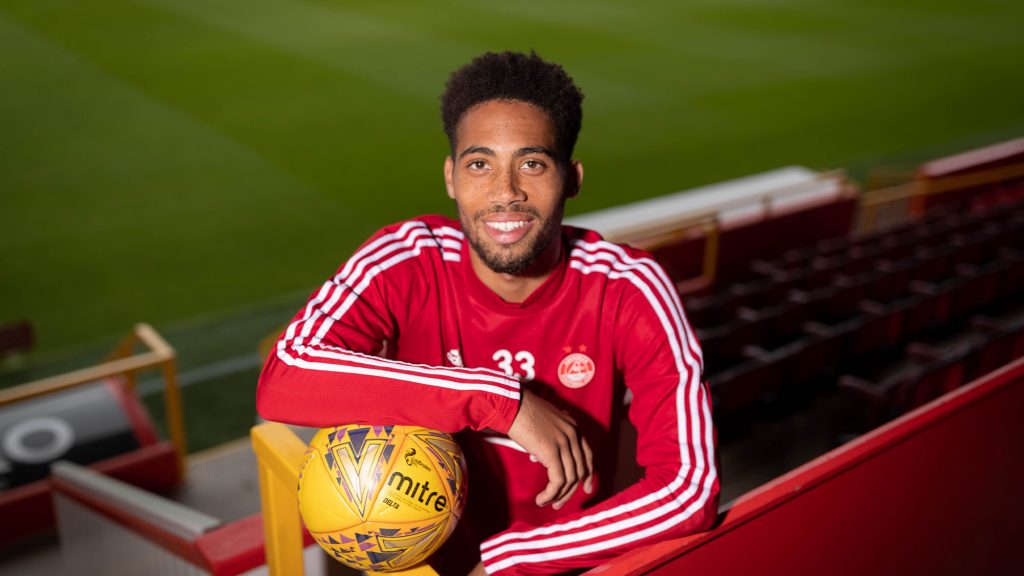 On loan Bristol City defender Zak Vyner also looked ahead to the visit of The Highlanders.

“It is really disappointing for Ash and Scott but that is football. A lot of opportunities for other players come from guys being injured. I don’t want to wish an injury on anyone. I had a long chat with Ash and he is obviously very disappointed. But I have to try and take this opportunity with both hands and show everyone what I can do. That starts if I play on Saturday.

“If you win a couple of games in football then the confidence builds. And then you feel that you can go into any game and beat anyone. That is what we need to do on Saturday. Get a win and get the ball rolling and then hopefully it is the start of a run of winning games. 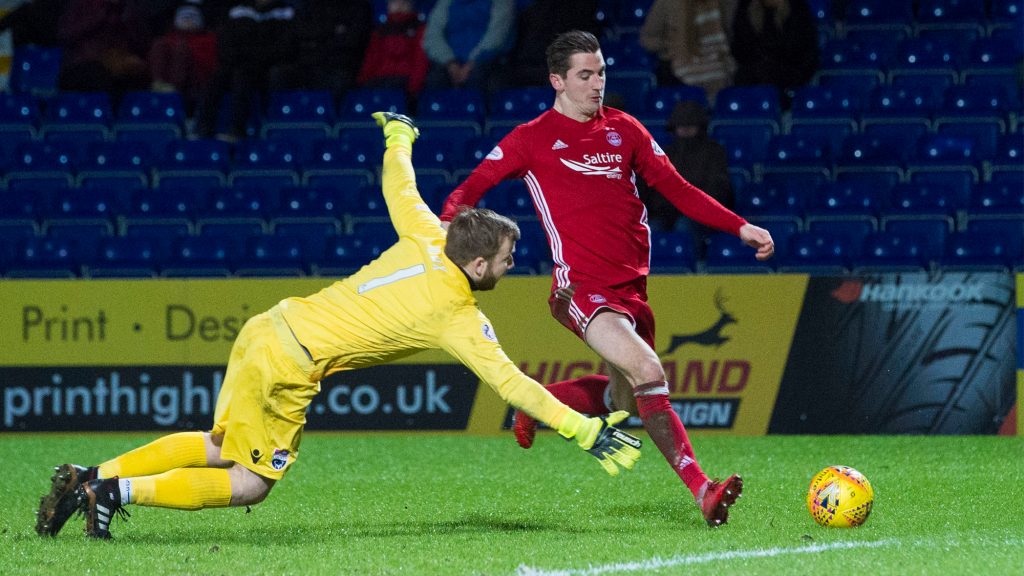 Doubles from Adam Rooney and Kenny McLean helped The Dons on their way to a 4-2 victory in Dingwall.

This will only be the 20th time the two sides have ever met, with the first game coming in a 0-0 draw at Pittodrie in 2012.

This is County’s first visit back to Pittodrie in almost 22 months.

Andy Considine is the only player likely to feature today who was in either squad named for the first league meeting of the teams in that game in August 2012.

Ross County were unbeaten in their first four league meetings with the Dons, winning three times, before losing for the first time to Aberdeen on 29th December 2013.

Of the last ten goals Aberdeen have scored against County, half of them have come from former Inverness Caley Thistle players – Jonny Hayes (2), Adam Rooney (2) and Ryan Christie.

Shay Logan has six goals against Ross County in his fifteen appearances against the Staggies.

Story Behind The Pic: 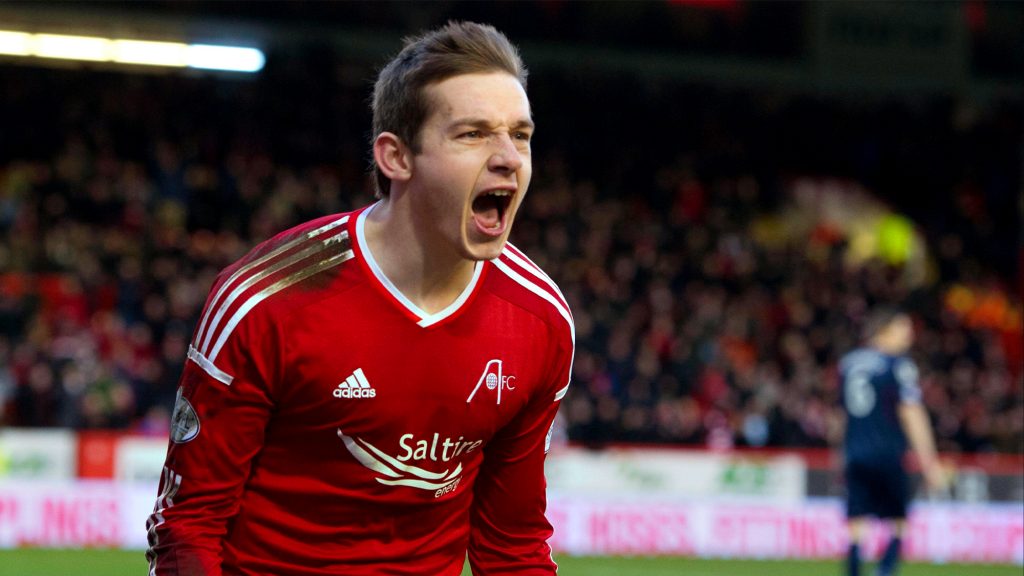 Goals from Adam Rooney, Peter Pawlett, Shay Logan and David Goodwillie extended Aberdeen’s unbeaten run to 10 games and moved them level on points at the top of the table with Celtic.

Report | Dons get back to winning ways at Pittodrie

Two goals in three first-half minutes put the Dons on the way to a convincing and well deserved victory over Ross County, sending them into the international break in good spirits. 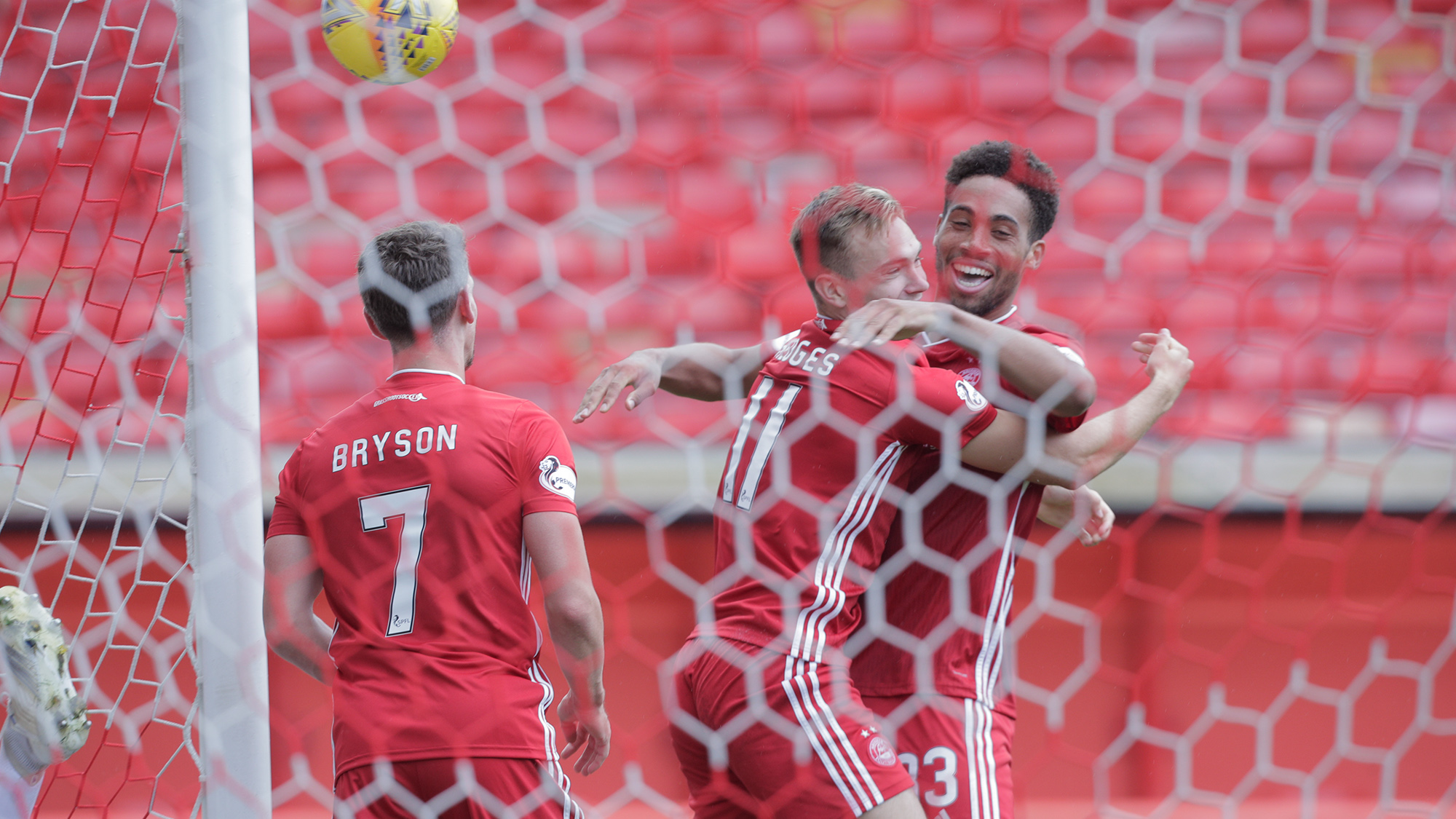 Two goals in three first-half minutes put the Dons on the way to a convincing and well deserved victory over Ross County, sending them into the international break in good spirits.

Derek McInnes made four changes to the team that drew 0-0 at Rugby Park last Saturday, two of them enforced by injury to defenders Scott McKenna and Shay Logan. They were replaced by Zak Vyner and Mikey Devlin, while Niall McGinn and Ryan Hedges also returned to the starting XI in place of Jon Gallagher and James Wilson who were among the substitutes. Following the 4-1 drubbing that Ross County took at home to Livingston last weekend, they also made four changes, Kelly, Fontaine, Spittal and Chalmers replaced with Watson, Gardyne, Grivosti and the returning Richard Foster.

With Pittodrie cloaked in a blustery, swirling wind, McGinn won the Dons an early corner just two minutes in and another followed immediately after as the Dons kept the pressure on, though Sam Cosgrove twice looked to be flattened as he challenged for crosses, Ross eventually clearing their lines.

Eight minutes in, a quickly taken free-kick by Craig Bryson had McGinn in on goal, his ball across the face pushed by Laidlaw into the path of Cosgrove who seemed certain to score, but his shot from eight yards out was hooked off the line by Watson.

On the quarter hour, a great break down the left by Greg Leigh earned him time to pick out McGinn with a precise pass along the deck but from 14 yards out, McGinn skied his effort well over from a promising position.

Following a string of fouls on Cosgrove, one of them was finally given midway through the half, Hedges’ ball from the right touchline reaching Mikey Devlin who couldn’t get an angle on his header and put the ball well wide of goal.

Two minutes later, patient football from the Dons kept County penned in before McGinn crossed dangerously, Watson clearing the ball with a downward header that bounced over, more by luck than judgement. Two quick corners that followed came to nothing.

In the 27th minute, Stewart went into the book for an assault on Joe Lewis who had already comfortably caught a cross, Stewart jumping into him with a reckless and unpleasant challenge.

The Dons won a free-kick for a Stewart handball some 35 yards out in the 34th minute. The set play was beautifully worked, McGinn playing it short and wide to Hedges whose first time cross with the left peg picked out Leigh who rose superbly in the centre of the penalty area to thump his header into the far corner, a goal straight off the training pitch.

Two minutes later, Laidlaw and Morris got themselves into a tangle, the keeper taking out Lewis Ferguson on the far edge of the box, the referee pointing to the spot after a moment of consideration. Up stepped Cosgrove to bury the ball into the bottom corner to the goalkeeper’s right, his 10th goal of the season before August is out.

Ross responded swiftly and a long ball got McKay into good space eight yards out, but he made a complete hash of his volley as the ball dropped over his shoulder and the danger was gone. Grivosti ended the half with a 40 yarder that scaled the heights of ambition but plumbed the depths of execution as it went miles over the bar.

Three minutes into the second half, Stewart and Funso Ojo collided, purely accidentally, Ojo coming off worst and needing treatment before continuing.

The Dons were patient from the restart, McGinn eventually receiving the ball out on the left. He floated the ball to the back post where Foster and Laidlaw dithered. Hedges, in contrast, was decisive, nipping between them to score from a couple of yards out and headed off to celebrate as the County pair tried to shift the blame onto one another.

The visitors were swiftly up the other end, a Stewart shot smothered by Ojo as he went to ground two yards in front of him. The ball clearly touched his hand, purely accidentally, but the referee pointed to the spot – is anybody clear on the new handball rule? McKay faced Lewis from 12 yards. He went the opposite side of the goal to Cosgrove’s effort, the ball clipping the outside of the post and flying clear as the Dons remained 3-0 up.

Ross County tried to shake things up with the introduction of Spittal for Mullin on the hour. Lewis Ferguson then tried to find goal from 25 yards, the ball taking a deflection and dipping wickedly just over the bar with Laidlaw flatfooted. Scott Wright became the Dons’ first swap, replacing Bryson after another neat and tidy display oiling the midfield engine in the 62nd minute.

A great ball up the line from Devlin allowed Hedges to sit Foster on his backside before cutting into the box and crossing sharply, McGinn shinning the ball wide of goal from the edge of the six yard box in the 65th minute. A minute later, Laidlaw made a good save at his near post from a ferocious Cosgrove drive as the confidence was really flowing through the Aberdeen side. Graham immediately came on for McKay in County’s second change before the corner was taken.

Ross almost gave themselves a lifeline in the 70th minute after Vyner was dispossessed, Stewart sent in on goal, shaping his effort around Lewis, the ball thumping against the post and back into play, a decent attempt from the striker. Three minutes later, Considine went into the book for a late challenge on Gardyne as the game began to peter out, the Dons content to keep the visitors at arm’s length.

Laidlaw had to make a good save in the 80th minute, Wright’s sharp shot saved with his feet after Cosgrove had set him up with a neat lay-off from Leigh’s cross.

Power became Ross County’s late switch, coming on for Stewart and the Dons then made a double change with Bruce Anderson and Jon Gallagher getting a late run out in place of McGinn and Hedges with seven minutes to go. Almost immediately, Anderson took a whack as he fell awkwardly on his shoulder as he chased a ball to the by-line with Watson but was eventually able to continue.

Vigurs had a chance to reduce the arrears in the 89th minute but placed his free-kick over the bar from 25 yards out, the last meaningful action of the afternoon as the Dons made it two out of two in the league at Pittodrie.