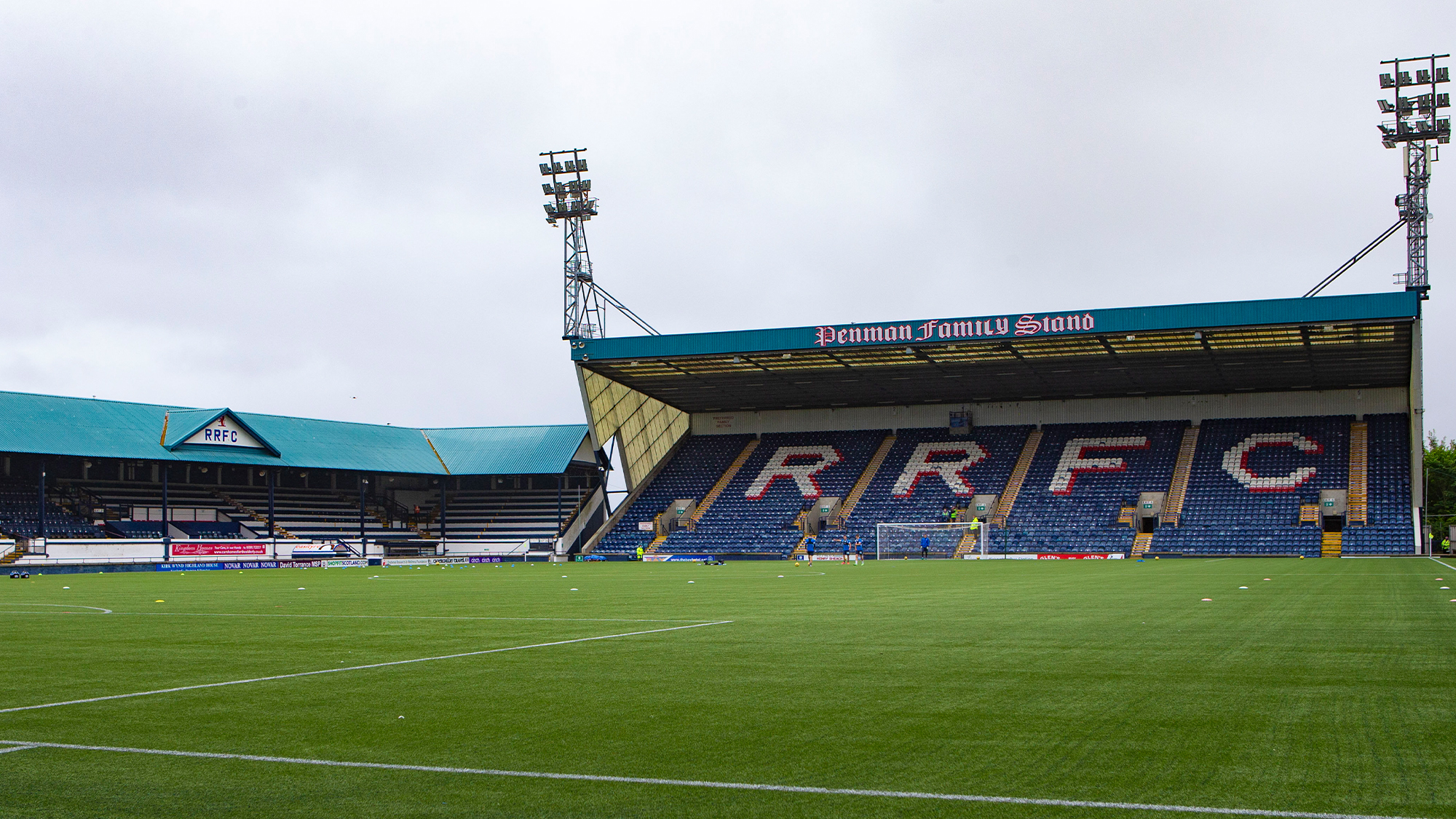 Andy Considine and the manager preview our Premier Sports Cup tie with Raith Rovers on Sunday. 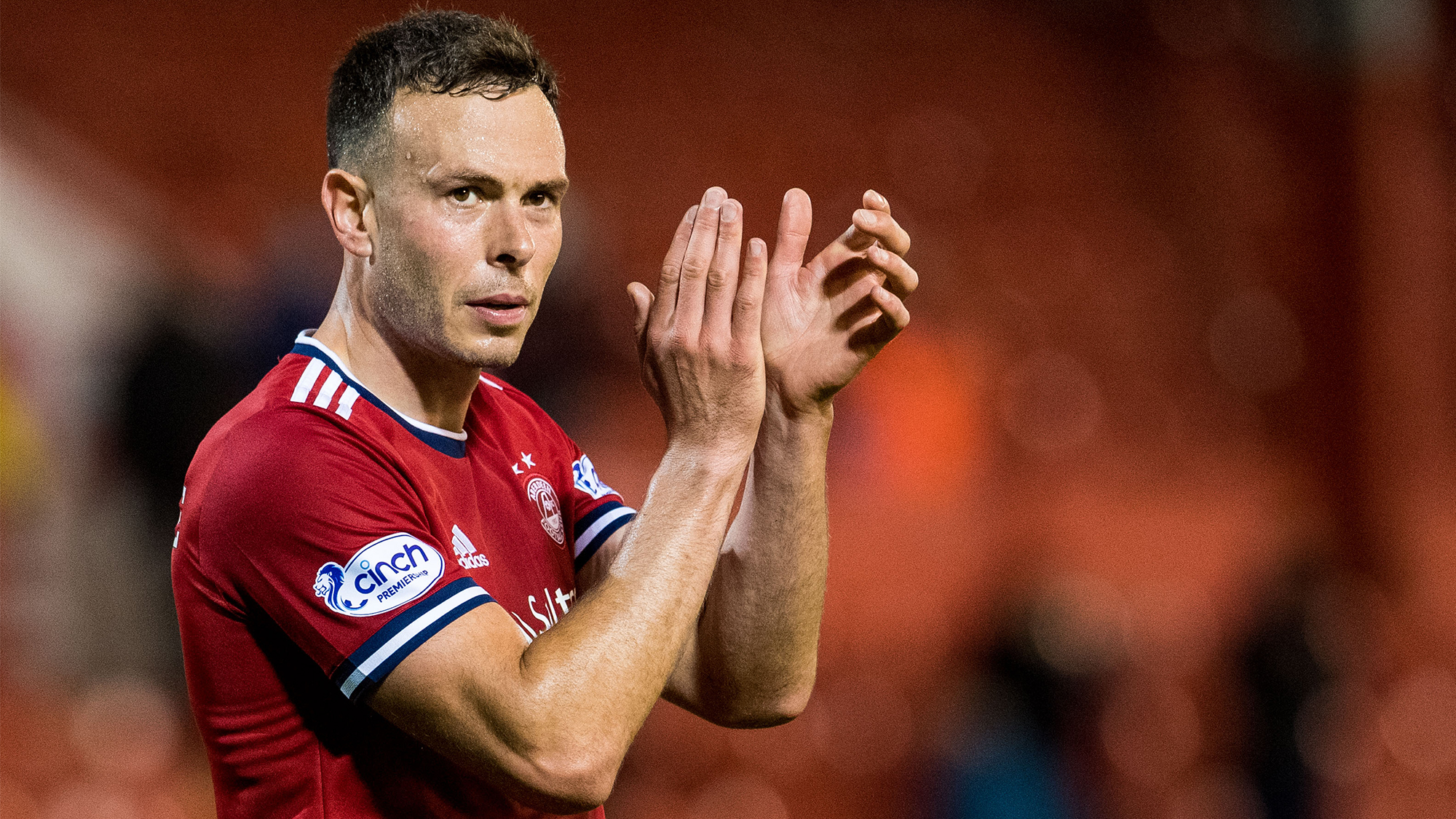 “It is great to qualify for the Play Off Round of the Europa Conference League, the boys deserve it after the two legs. We were a bit slow to get out of the traps but at the same time I thought we had three of the best chances in the first half and if we take those then the game is done.

“The manager made a couple of changes at the start of the second half, it seemed to help us a little bit, it gave us a bit more energy. I can’t wait to see Ryan’s first goal back, the feet from Funso looked incredible from where I was standing! What a goal it was! The second goal, Ryan does that in training every day, he is an outstanding player. We need players like that who can produce a bit of magic when we need a goal.

“Funso has probably been one of our best players in pre-season. A lot of the boys have recognised how determined he has been to prove himself. He has been outstanding for us. I never thought I would see him flying down the wing, but he has added that to his game! He always had very good feet and has always been very good technically. He has normally been that sitter in front of us, but he has been pushed further forward and it is coming up trumps. I thought he was absolutely brilliant for us in the second half and it gave us a different dynamic. 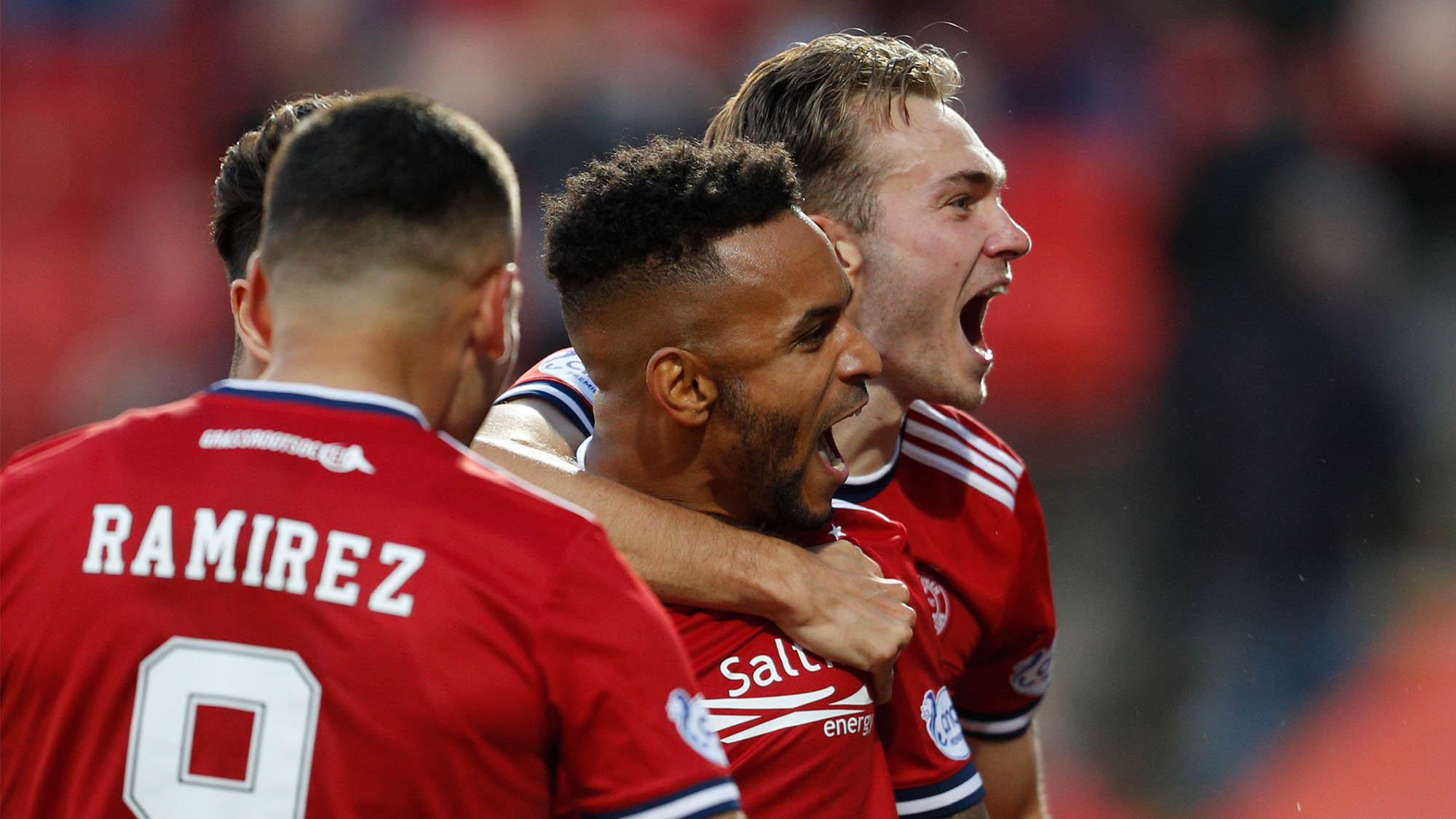 “It is a massive game against Qarabağ. They are a very good team. Any round in Europe will be tough but it is one of those ones that you go over there and be as resilient and as tough to beat as possible and take something back. If we can do that then we have every chance. If we can get back to Pittodrie with a win or a draw, we will have every chance. It will take a monumental 90+minutes over there, in the heat but we have the squad and the players to do it. It is a huge chance for us. I know each and every one of the boys is desperate to reach the group stages.

“When we walked out onto the park you could sense that the fans were right up for the game, as were the boys. It helps when you have goal scorers on the park, and they are firing. The boys work hard with Allan Russell after training doing shooting drills and at the moment it is coming up trumps so long may it continue.

“The boys work so hard in training, and it is showing on the park. 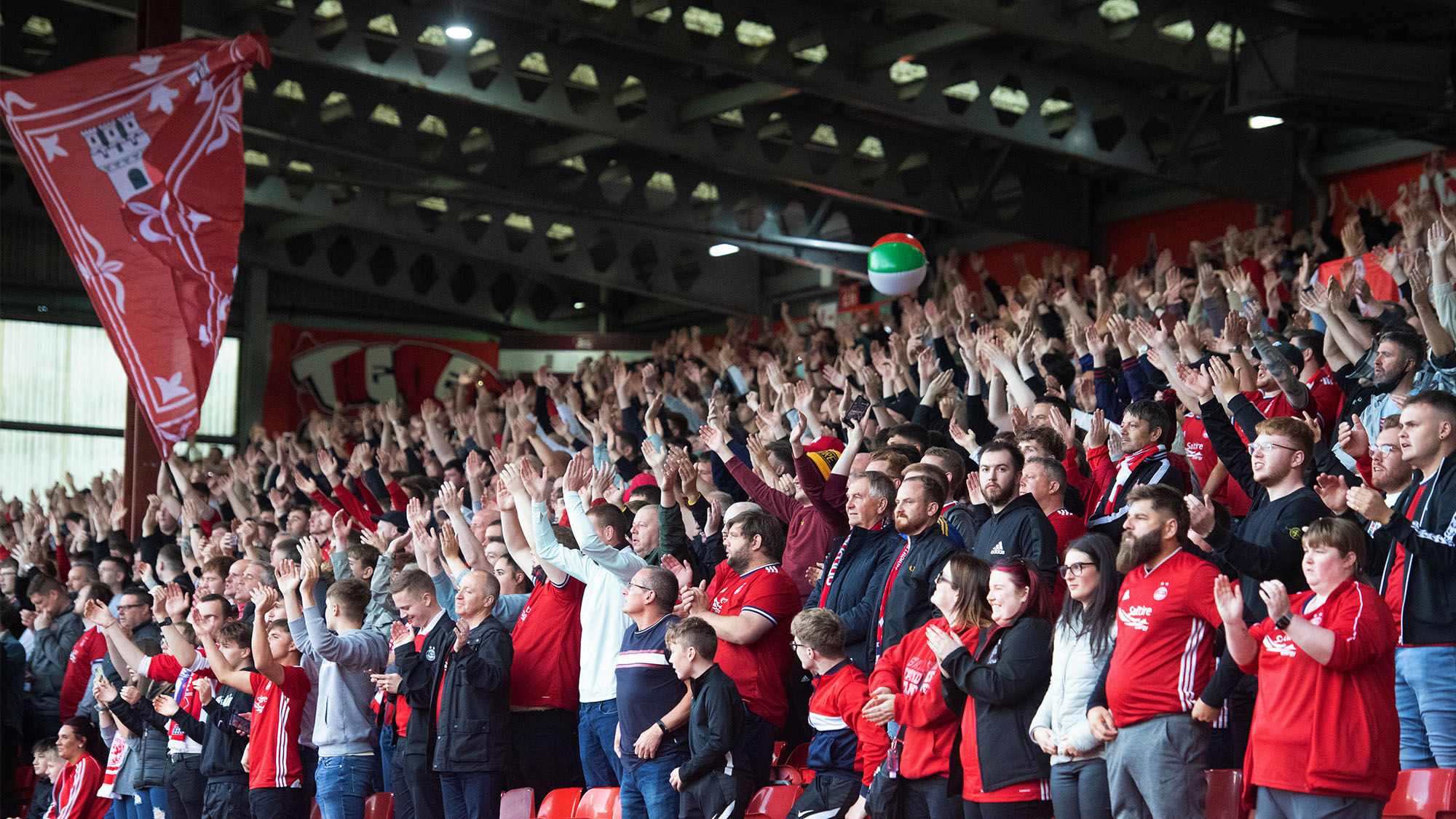 “Raith is a huge game for us. The great thing about playing in Europe is you are playing every three or four days. It will be a really tough tie. They had a good season last year and they have started off this season well. They have got some really good players that we will need to look out for and players with a lot of experience. It will be a tough ground to go to but as you saw last Sunday, if the manager needs to call upon the rest of the squad to get the job done then we can go and do that. I thought Sunday was a huge statement for us. Over the years when we have made big changes, we have not gotten the result, but I thought Sunday was a huge result with the number of changes we made. If it does happen on Sunday, then the boys will be ready to go. I am expecting a really tough game, we want to progress in the cup.

“It is hugely important and we need to have the right attitude. We need to focus but I feel that we have a really good group of boys.

“At the end of the day if you want to win silverware, you need to go to these difficult venues and get the results.” 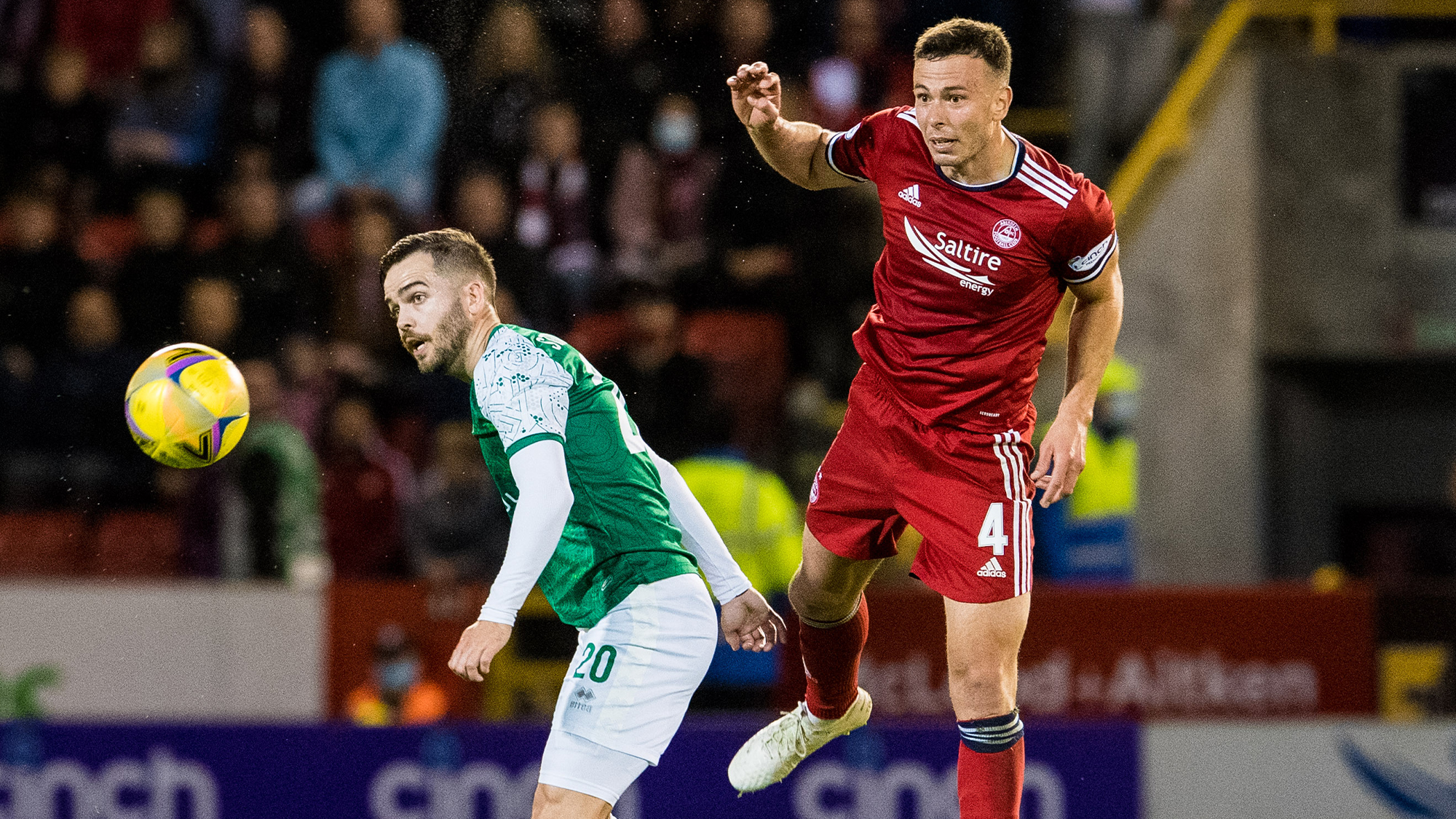 The Manager on Sunday

“We go to Raith on Sunday equally determined to win that game. They’re well coached, a good team, but we feel we can go there and in. We know it’s the early game on TV for a reason, people are thinking they have a big opportunity to knock us out, so we’re relishing another tough challenge. The expectation is there to win games, that’s why players come to play for this football club and that’s what we will look to do on Sunday.” 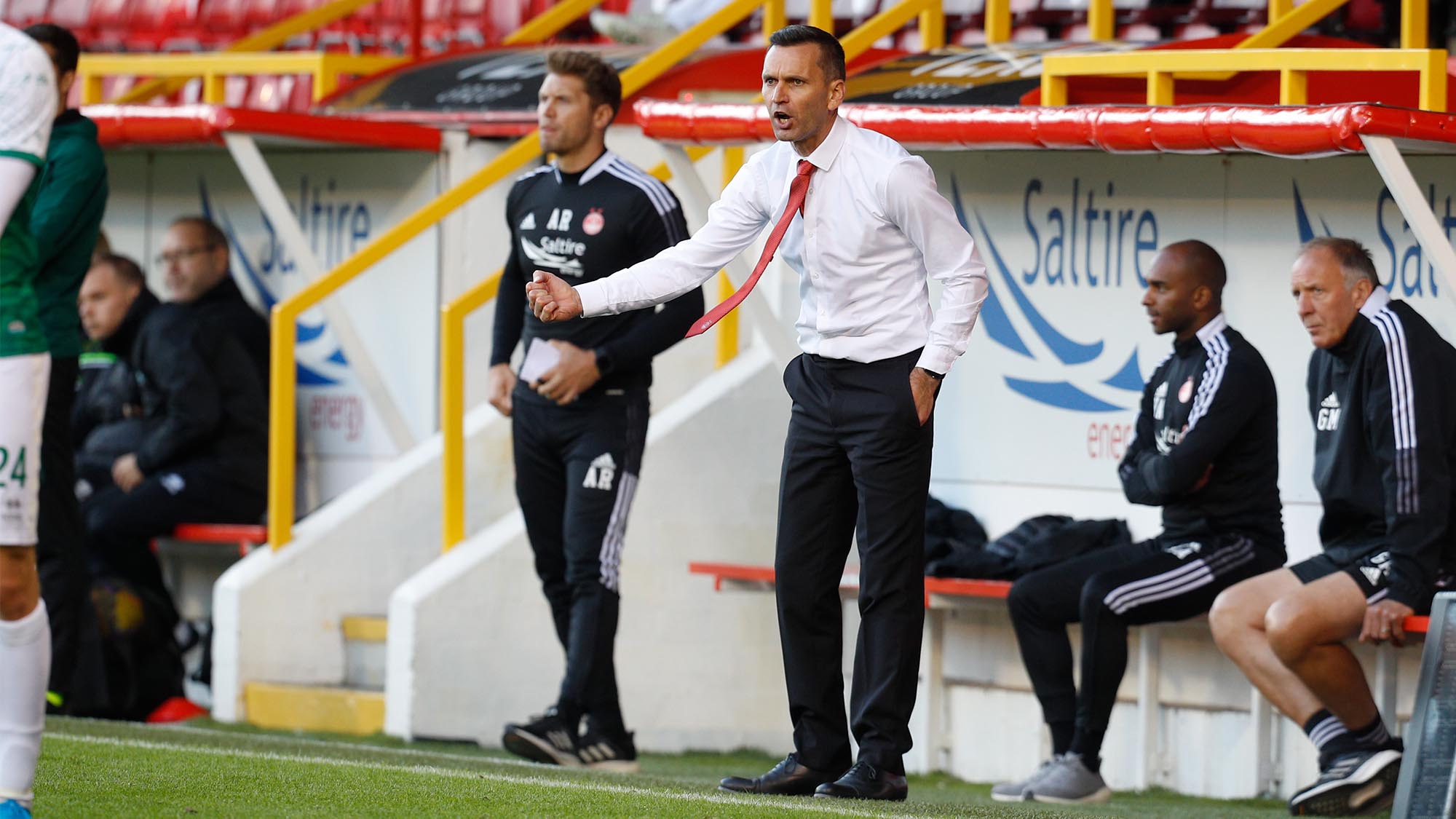 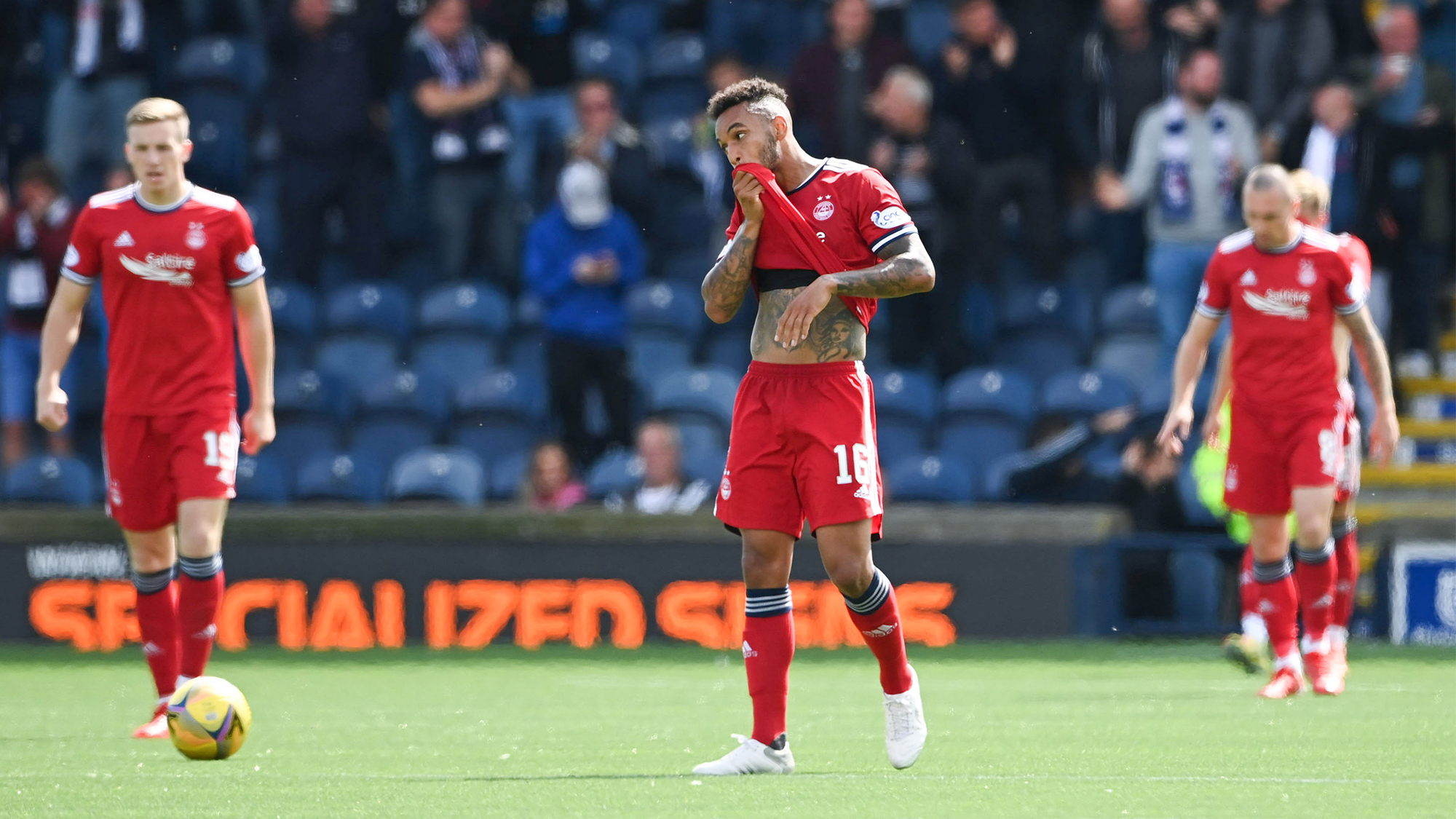 A lacklustre second half performance from Aberdeen saw them go out of the League Cup at the first time of asking for the second season in a row, credit going to Raith Rovers for turning the game around with two goals after the break.

After coming through Thursday night’s European qualifier with Breidablik, it was a change of cup competition for the Dons and Stephen Glass made seven change for the Premier Sports Cup trip to Stark’s Park. Into the starting side came Niall McGinn, Jay Emmanuel-Thomas, Funso Ojo, Jonny Hayes, Connor McLennan, Teddy Jenks and Jack Gurr. They replaced Andrew Considine, Calvin Ramsay, Scott Brown, Lewis Ferguson, Jack MacKenzie, Christian Ramirez and Ryan Hedges, all of whom were on the bench.

Championship side Raith Rovers came through a qualifying group that included Livingston, Brechin City, Cowdenbeath and Alloa Athletic. There were beaten 1-0 in the league at Inverness Caledonian Thistle last weekend and made two changes to that starting XI, Blaise Riley-Snow and Ethon Varian in the team at the expense of Matej Poplatnik and Tom Lang, who both dropped to the bench.

Aberdeen started in composed mood, stroking the ball about on the artificial surface with the home side chasing shadows, very much penned into their own half. A ninth minute free-kick on the left corner of the box gave the first clear-cut opening, Hayes’ ball in reaching Declan Gallagher on the penalty spot, but he got under his header and put the ball over the bar.

Gallagher was in dramatic action at the other end two minutes later, getting an important block on a shot from Riley-Snow after Matthews had got into a dangerous position at the by-line. Lewis was required to save his cross shot, Matthews then hunting the bits and pieces.

Thirteen minutes in and Emmanuel-Thomas was on the scoresheet for the Dons for the first time, and one to savour it was. Gurr played a neat first time cross in from the right flank with his left foot, McGinn cushioning the ball down cleverly for the oncoming Emmanuel-Thomas. From 20 yards out, he caught the ball perfectly, his right foot shot arcing around the goalkeeper and into the far corner.

The Dons were in full spate now, Emmanuel-Thomas setting up Jenks to burst into the box, Matthews across with a fine last ditch tackle on 18 minutes as the loanee looked to pull the trigger.

Aberdeen were looking in control, composed in possession and keeping Rovers at arm’s length, the home side unable to make any real impression on the game. That changed on 35 minutes, Zanatta producing a quick turn inside the box to get him away from Ross McCrorie, but the angle quickly became too tight for him and he slashed a shot into the side netting. That was to prove the last meaningful action of a quietly satisfactory first 45 minute for the visitors.

No changes from either side at the break, but a good diagonal ball from Tait set Zanatta away two minutes into the half. He went to ground under no kind of challenge from Gurr, but the referee gave a free-kick on the left edge of the box. It proved a crucial decision because from the set piece, Rovers were back on terms. Smashed into the near post at pace by Tumilty, Varian got in front of everyone to nudge the ball into the net.

Raith had the bit between their teeth now, Zanatta fizzing a dangerous cross through the six yard area on 52 minutes, just inches in front of Varian’s diving frame as the home side looked to turn the game on its head.

Aberdeen started to get themselves going again, Hayes curling in a dangerous cross from the left on 56 minutes, the ball just in front of Emmanuel-Thomas. On the hour, Ramirez was introduced to the action as Aberdeen looked to up the tempo, the American replacing McGinn.

Raith were in the ascendancy now though, Tumilty raiding forward on 63 minutes, pulling the ball across the top of the box where Riley-Snow ballooned his shot over the bar. Confusion between Jenks and Hayes four minutes later allowed Connolly to get in on goal, cracking a 20 yard shot that Lewis pushed away to safety. That was the signal for a raft of changes for the Dons, Brown, Ferguson and Hedges replacing McGeouch, Jenks and Emmanuel-Thomas.

Before they’d had chance to settle, Raith were ahead. Riley-Snow was given too much space to put in a long range shot. Lewis palmed it away but Zanatta picked Gurr’s pocket from the rebound and smashed the ball across Lewis and into the far corner. Next up, Ramsay was on for McLennan on 75 minutes, Aberdeen’s fifth change of the afternoon as they looked to salvage the game.

A good run and a terrific ball in from Hayes on 79 minutes looked to create an opportunity, but there weren’t enough red shirts in the box to get on the end of it. Rovers made their first change a minute later, Varian replaced by Poplatnik. Riley-Snow then made way for Arnott on 83 minutes as the hosts looked to break up the game in the latter stages though at this point, they were looking every bit as likely to score as the Dons.

A good combination by Ramsay and Gurr down the right gave Ramsay a chance to cross, winning a corner off Berra at the near post. The corner was cleared, Hayes coming on to hit it, injuring himself as his shot was blocked away, heading off for treatment and leaving the Dons down to ten men. Another change for Raith followed on 89 minutes, Zanatta going off, Fotheringham coming on.

The Dons were trying to inject some urgency into the game but the home side were standing firm as the game went into the final five minutes of added time. Next it was Hedges in the wars in a clash with the goalkeeper, Aberdeen down to nine men as the game came to a desperately disappointing end.