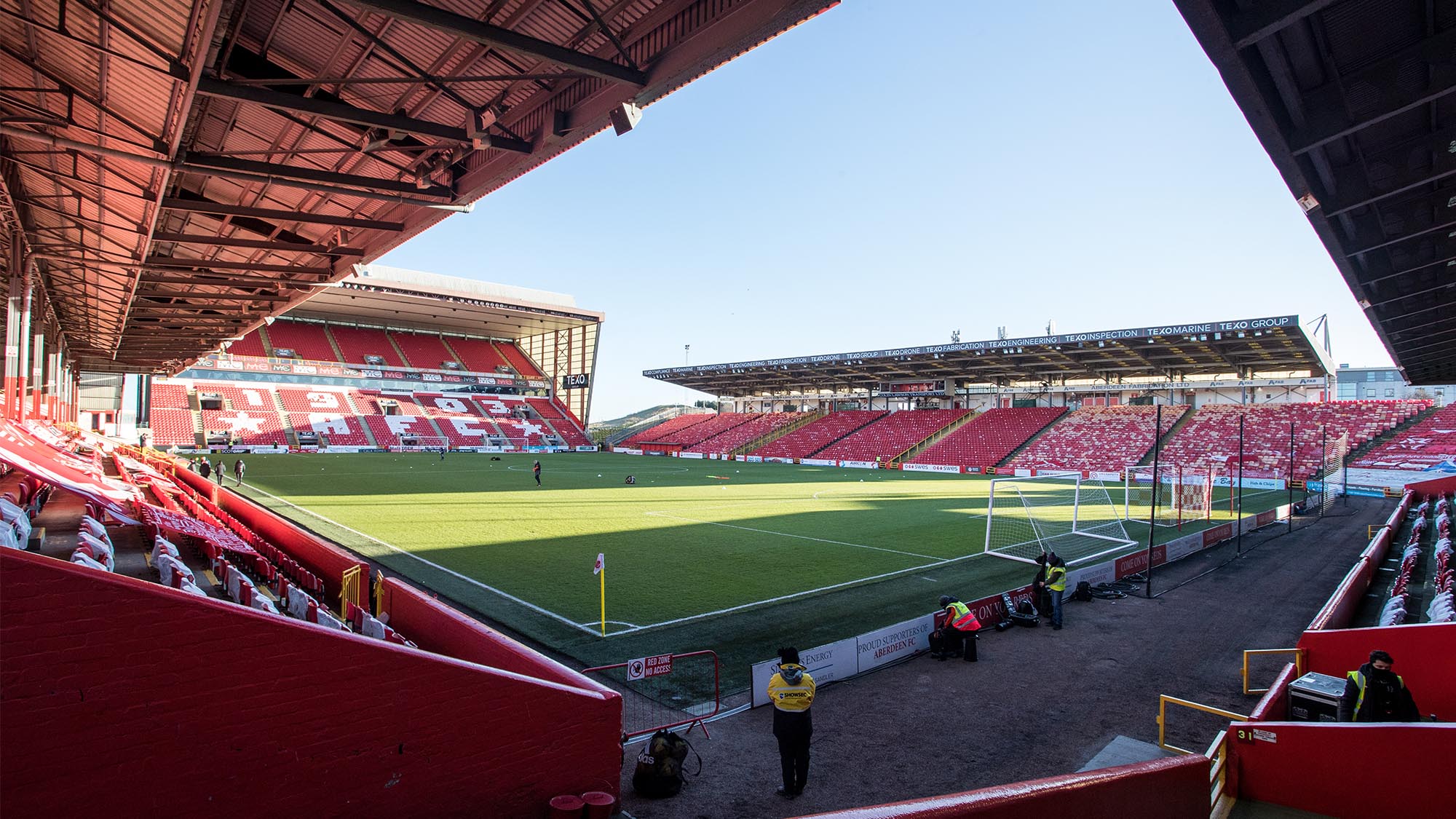 Tony Docherty sat down with the media, via Zoom, this afternoon to preview the second of our back to back games with Livingston. 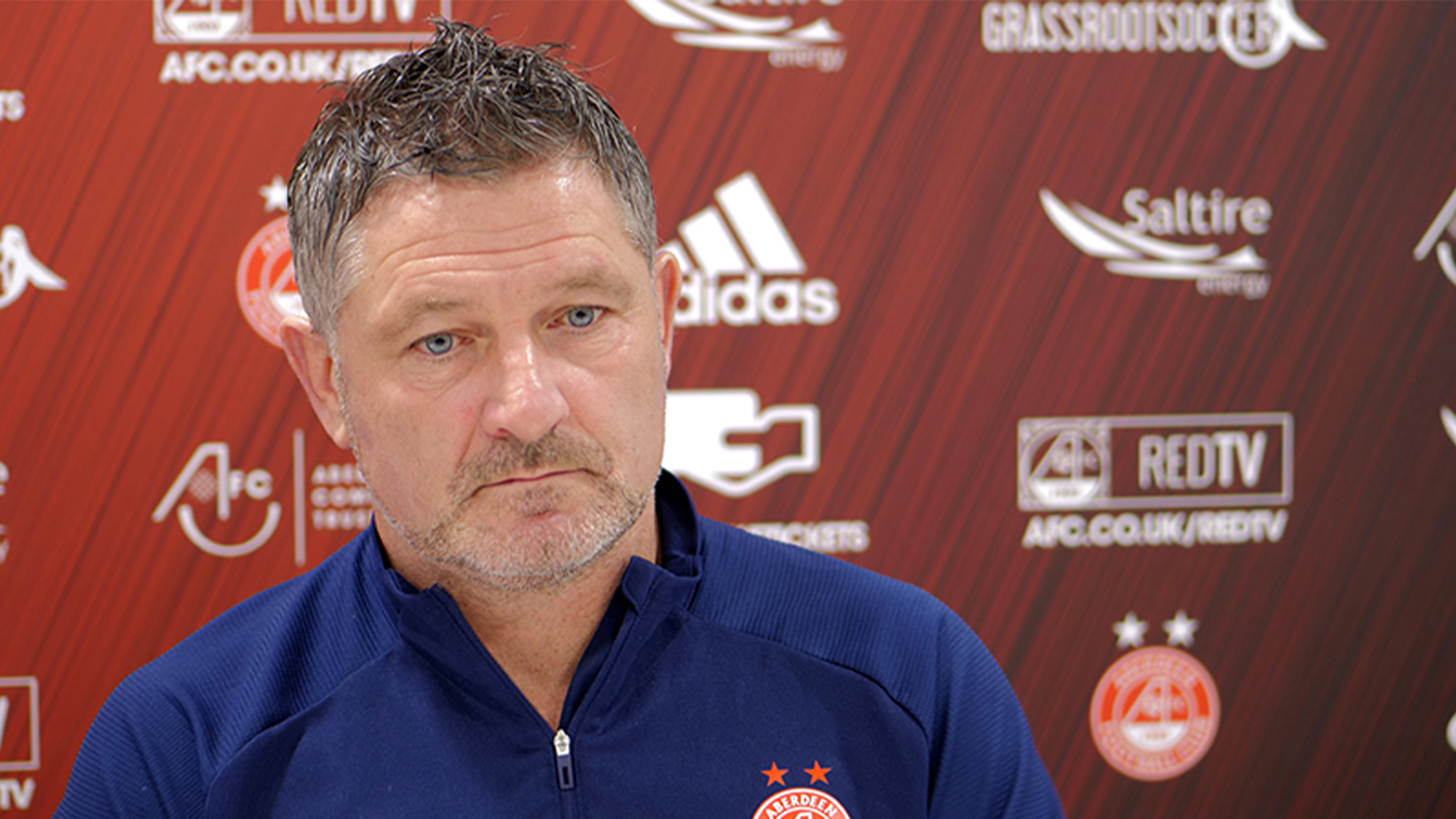 “We’ve had two games on the bounce on the road against teams who are high in confidence in the last week in St Johnstone and Livingston, having qualified for the cup final. We feel we should have won both of those games, which is why we want to try and improve the team in forward areas, but the level of performance, the structure of the team and the way we’ve defended in those games has been very good.

“You need to be right defensively when you go to those places and we want to carry that side of things into tomorrow because getting another clean sheet would go a long way towards winning the game. We’ve had 13 clean sheets in 25 games in the league which shows how strong our defensive shape has been, and how well Joe has bene playing in goal – there was another terrific save on the goal line from him on Saturday. We need to continue to do well defensively, but we need to put the gloss on things at the other end. We want to get the goals for column up across the rest of the season and if we do that, we’ll give ourselves every chance of achieving our objectives for the season. 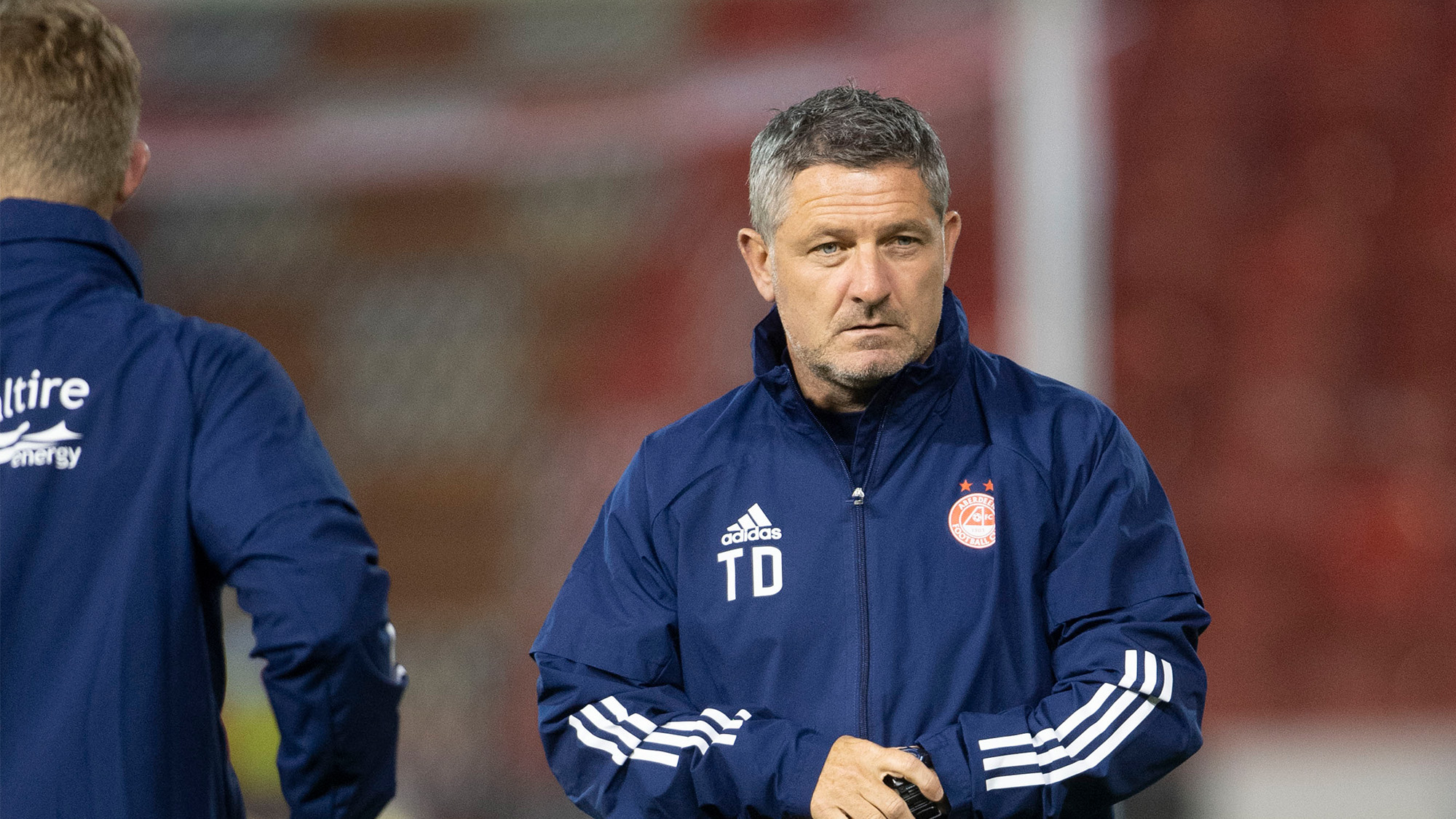 “On top of that, I do think we played well as a team on Saturday, there was a good dynamic to it, our counter-attacking was good, there was pace in the team. Connor came in and did a really good job for us up front, we got into good areas, we carried a real threat about us. Nine times out of ten, the boys would have put those chances away, but it didn’t happen. We’ve continued working on that and hopefully, if we get into those positions on Tuesday night, we’ll capitalise.

“But we know we’ve a hard game ahead of us against a tough opponent. They’re unbeaten in 13 games, which tells you how well they’re doing, how consistent they are. They’ve got a strong collective attitude there, they make life hard for every opponent, so our focus at present is entirely on them and on ending that run. 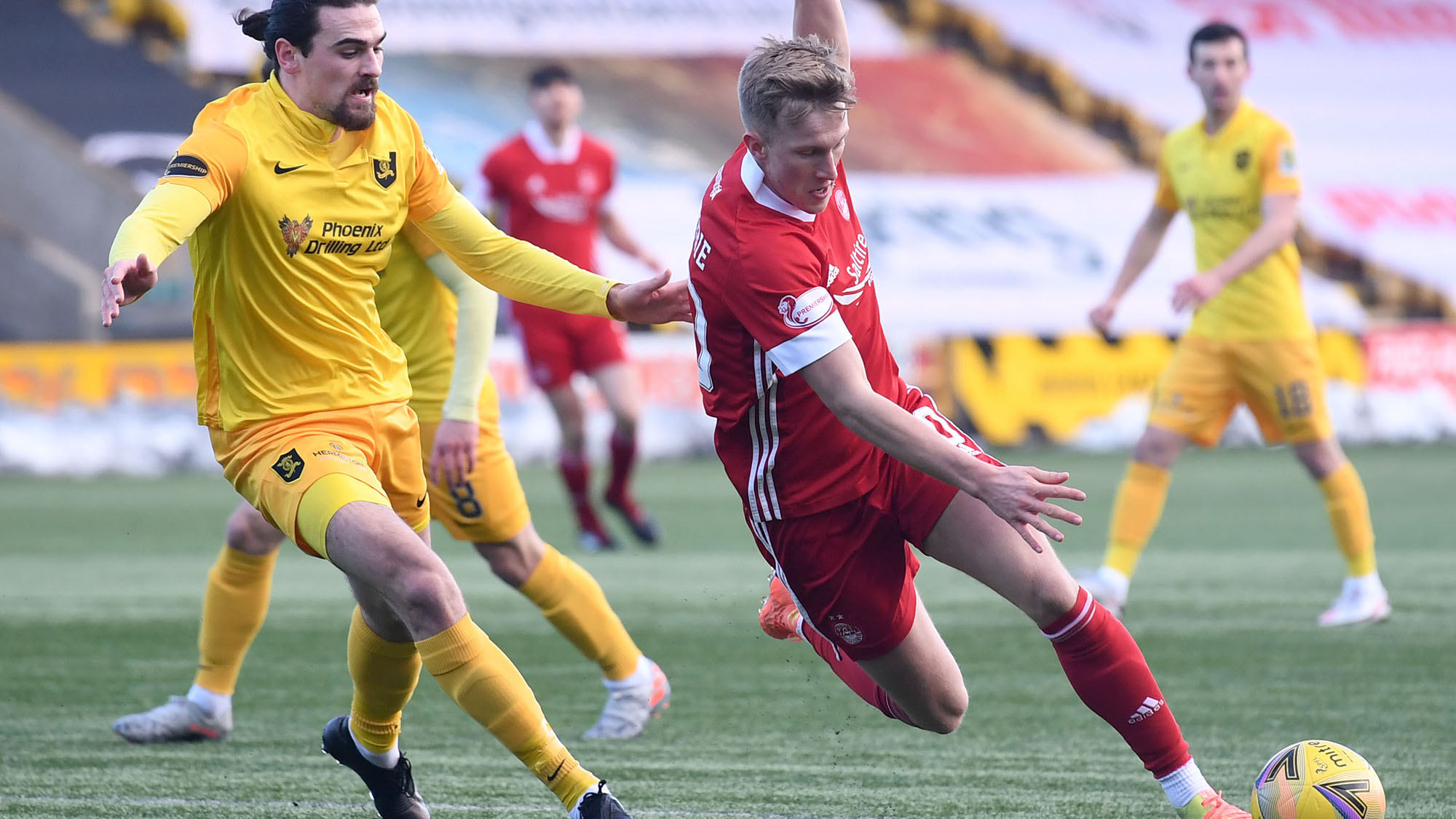 “We’re working on getting another good performance from the players, doing the rights and hopefully replicating the result in our last home game when we beat Motherwell 2-0. We’ve had a good record at Pittodrie of late, we’ve won four of the last six, we should have beaten Dundee United in one of the others, then we lost to Rangers 2-1, where we played a lot of the game with ten men. That’s the only defeat in nine here, so we feel positive when we’re playing here.”

Having lost their last two matches, Aberdeen moved back into the top six with a comfortable victory over Livingston at Pittodrie. Russell Anderson headed Aberdeen in front after 17 minutes and Steve Lovell doubled The Dons lead with another headed finish just after the hour mark. Dutch winger Ferne Snoyl made sure of the points with just 10 minutes remaining when he fired into the net to score his first goal for the club. 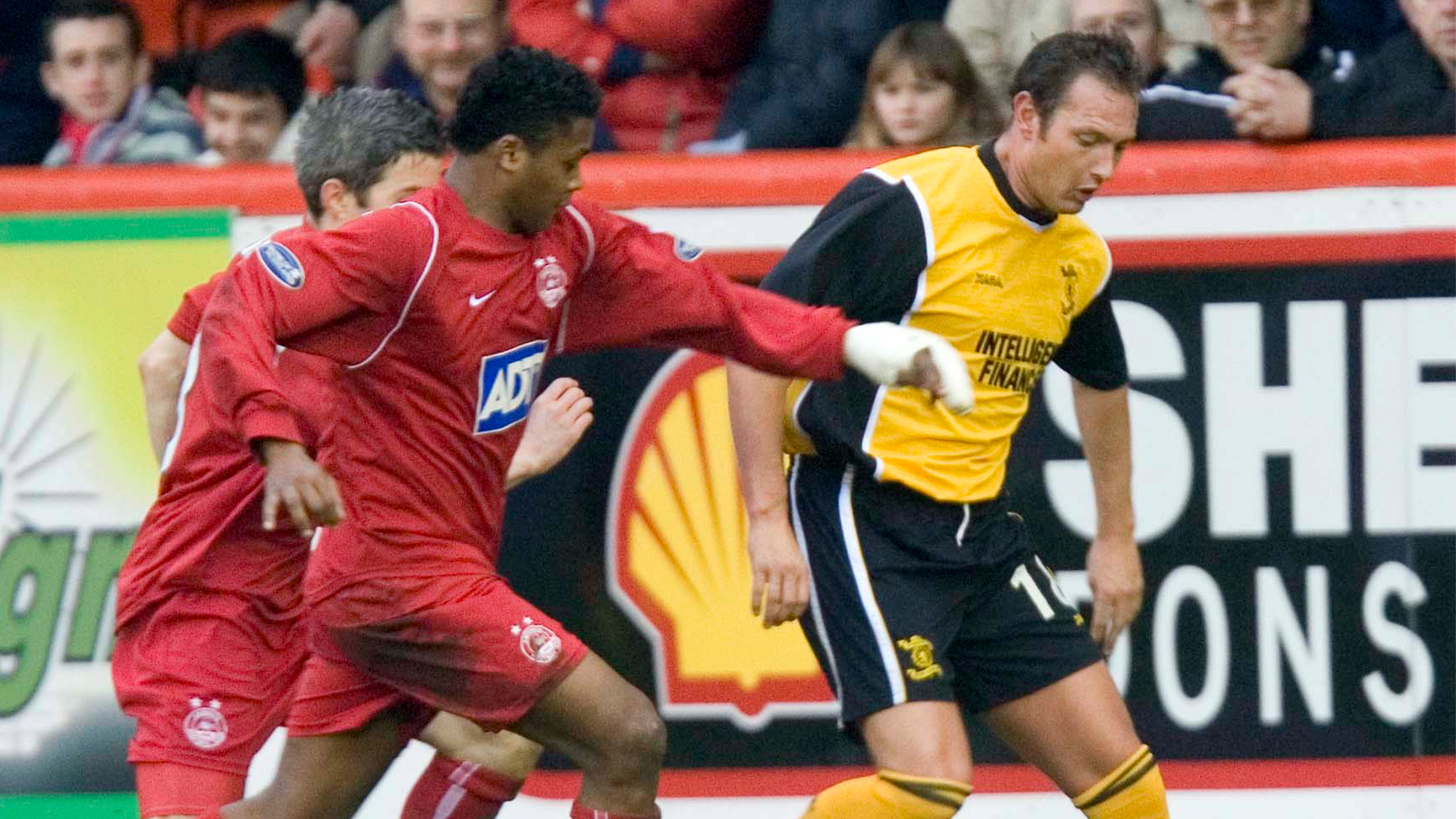 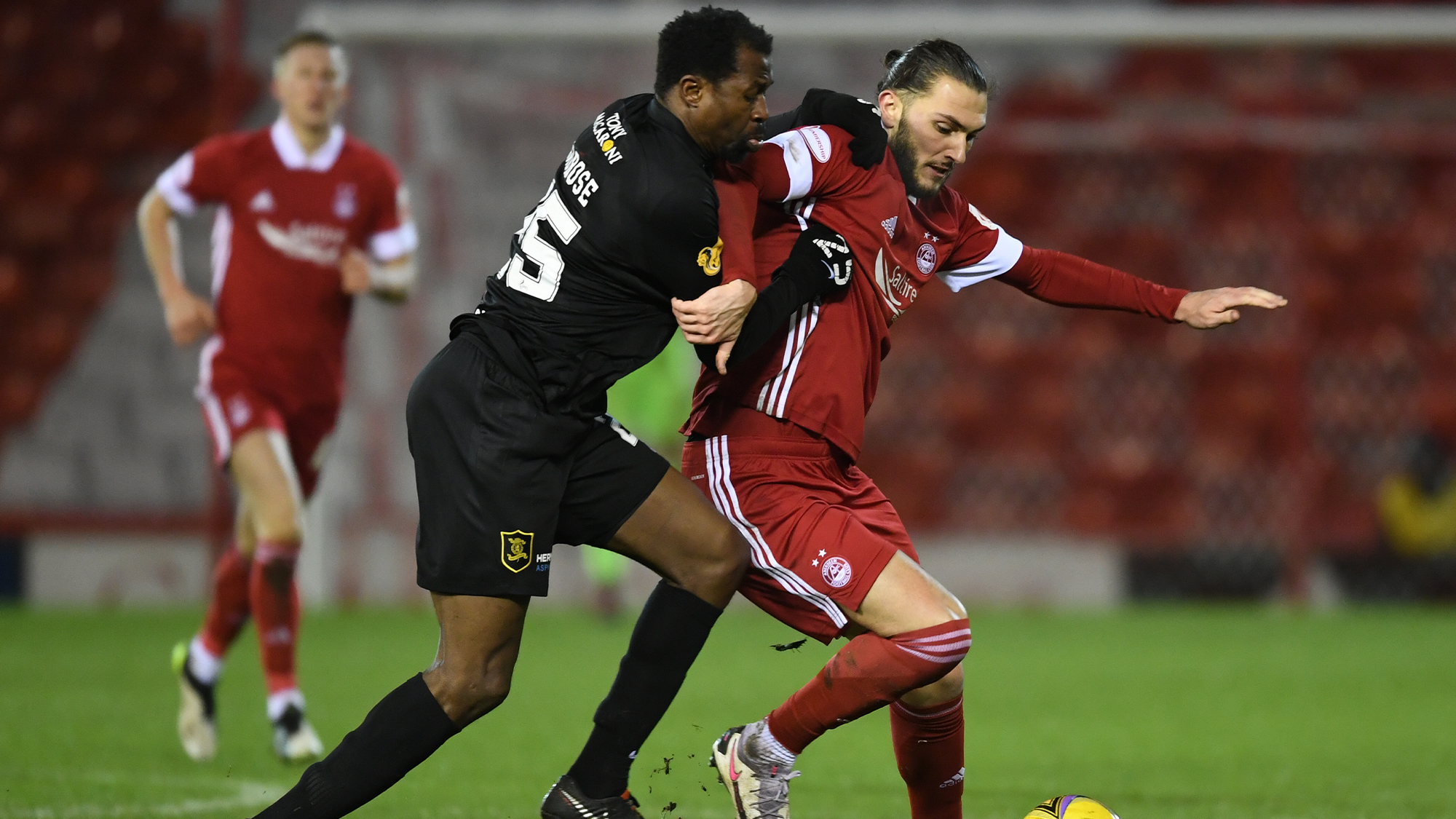 A very poor first 45 minutes was costly as Aberdeen shipped two poor goals to slip to defeat despite a vastly improved second half performance.

Following the comings and goings of deadline day, Derek McInnes gave Fraser Hornby an immediate start for the Dons in his one change from the starting line-up that drew 0-0 with Livingston on Saturday, Matty Kennedy dropping to the bench. Callum Hendry also got a first taste of the matchday squad, joining him on the bench, with Jack MacKenzie also among the substitutes in place of Kieran Ngwenya, the departed Scott Wright and Bruce Anderson, now on loan at Hamilton.

There were four changes from Saturday’s game for Livingston, Jackson Longridge, Steve Lawson, Josh Mullin and Jay Emmanuel-Thomas in for Marvin Bartley, Scott Robinson who drop to the bench and Craig Sibbald and Ciaron Brown who miss out altogether. John Guthrie then got injured in the warm up – as did Sibbald, who was due to be on the bench – and was replaced by Aaron Taylor-Sinclair in the starting XI, a fifth change from Saturday.

After a scruffy opening in a swirling wind, Livi grabbed the lead with the scruffiest of goals after seven minutes. Greg Leigh gave the ball away in midfield initially, Livi working the ball out to the opposite flank. Serrano bent an ordinary looking ball into the near post which took a deflection, but as Joe Lewis came to collect it at waist height, it squirmed out of his hands, hit the post and rolled in.

The problems were compounded two minutes later when Ryan Hedges called for treatment having taken a blow on the shoulder when falling awkwardly a few minutes earlier under a poor challenge from Longridge who landed on Hedges. The Welsh international tried to continue but had to give up the fight in the 13th minute, Kennedy replacing him.

Just past the quarter hour, it was 2-0 to Livingston. Aberdeen had scrambled away a short corner but Livi worked it back out to Mullin on the right wing. He had time to curl in a cross and Devlin ran onto it, completely unchallenged, to bullet a header past Lewis from around the penalty spot. Echoes of the game against Motherwell earlier on in the season. It might have matched that scoreline in the 26th minute, Mullin intercepting a pass from Andrew Considine and releasing Emmanuel-Thomas. His drive from 25 yards out flashed across goal but just wide of the far post.

More concern on the half hour, Livingston pumping a long free-kick into the box, Lewis off his line but only able to get a weak punch on it as he came through a crowd of players. It fell to Taylor-Sinclair, but Lewis was down to block his shot. Two minutes later, as the sleet started to fall, Ferguson went into the book after colliding in mid-air with Mullin.

Lewis Ferguson was trying to spark his team into life and a driving run down the left won his side a free-kick 15 yards out. Kennedy’s ball in almost found Ross McCrorie before the visitors managed to clear their lines.

Ash Taylor needed treatment after 42 minutes as the problems continued to pile up for Aberdeen and he had to make way for Dean Campbell. Callum Hendry replaced Connor McLennan at the same time, the Dons having the number of breaks for substitutions eaten into by the enforced changes. Immediately, Longridge sliced Kennedy in half with a late tackle, collecting a yellow card for his trouble.

There was a better start to the second from the Dons at least, Jonny Hayes on the run down the left to win a corner. Stryjek did well to punch Kennedy’s flag kick to safety from under his crossbar.

It looked as if they’d pulled a goal back on the 53rd minute, Ferguson smashing one at goal from 15 yards after Hornby had cushioned a cross down for him. It flashed past Stryjek, whacked against the bar and bounced down. It certainly ruffled the side netting on its way down, but with the linesman behind the play, Livi were given the benefit of the doubt, the goal not given. Had that stood, it could really have been a game changer.

Ferguson was testing Stryjek again in the 57th minute, a low drive from the edge of the box, forcing him into a save at full stretch, away to his right. Much better from Aberdeen at last. It was Ferguson again on the hour, getting on the end of a Kennedy cross but putting his header wide of goal. If only the Dons had played the first 45 minutes with this same intensity and drive, because it was attack v defence now.

Livingston brought on their first sub on 69 minutes, Emmanuel-Thomas replaced by Reilly. Niall McGinn became Aberdeen’s last change in the 75th minute, as Hornby’s debut came to an end. Hoban picked up a yellow card, catching Pittman in the face with a stray arm, then Pittman almost sealed the win in the 78th minute, pouncing on a loose ball on the edge of the box and pinging a low cross past Lewis but off the post.

With ten minutes to go, Robinson joined the action in place of Mullin. The Dons kept plugging away but without really discomforting Stryjek, Leigh looping a shot over the bar after 83 minutes, then his cross from the left found the goalkeeper’s hands three minutes later. Aberdeen were left to rue the mistakes of the first half as Livingston saw out the 90 minutes to make it 14 games without defeat.