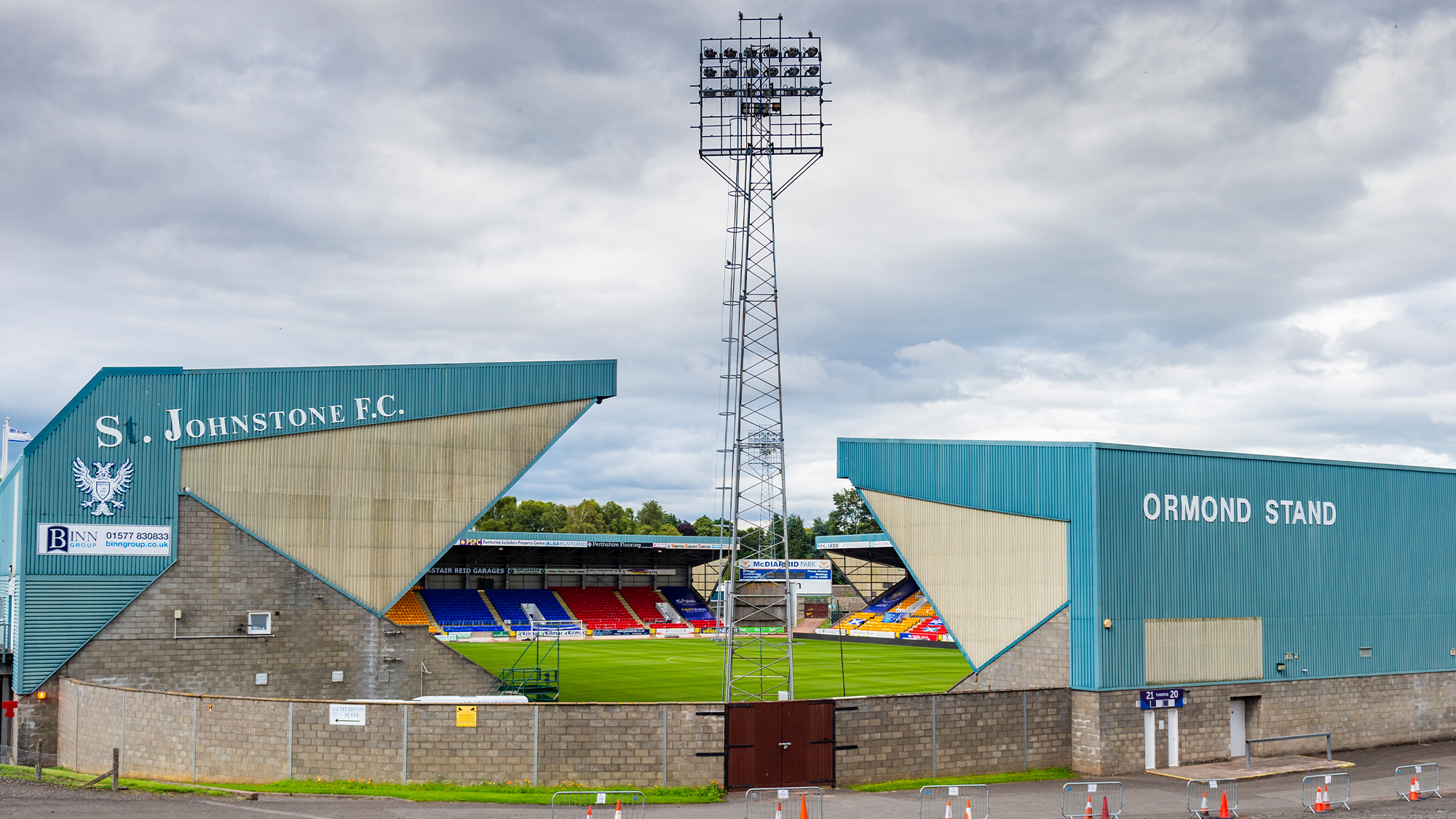 The manager sat down with the media this afternoon over Zoom to preview tomorrow’s game in Perth. 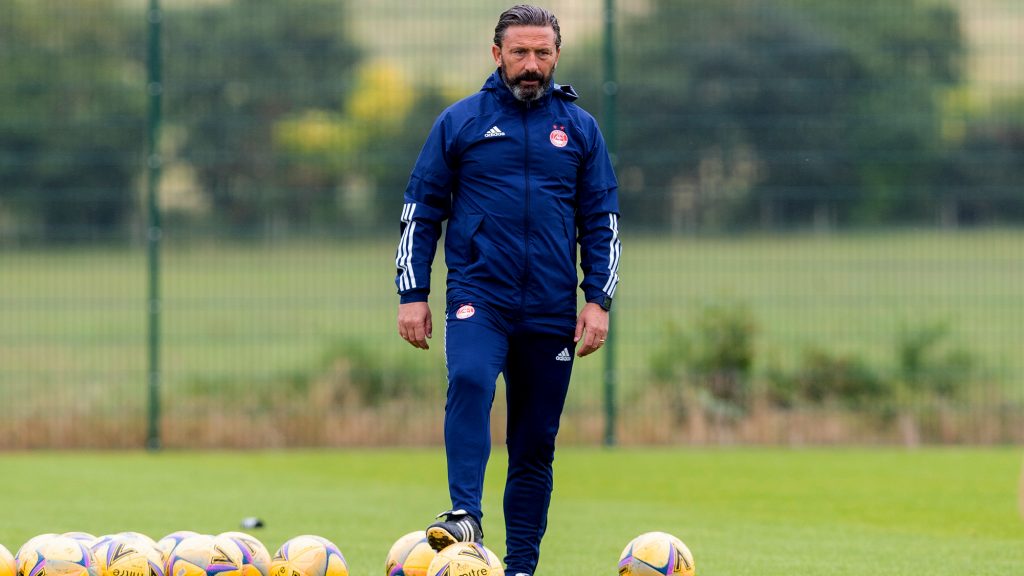 “When we were preparing for the Hamilton game, we were depleted in numbers, but we have four (Dylan, Matty, Craig and Jonny) added to that and obviously the addition of Ross McCrorie. We are not without problems though as Sam, Mikey and Ryan are out with long term injuries, Andy is suspended as well and we are missing a couple of the lads due to the circumstances of the last week.

“We have got to get the season up and running again and get back to talking about football.

“We want to try and keep everyone in the building at the minute because we don’t know what is ahead of us in terms of injuries and suspensions. We will take a breath after these next four games. We are obviously keen to bring in another striker on a short-term deal.

“If everyone is fit, the squad is strong, as strong a squad as we have had in terms of numbers and options.

“I need to applaud the club for the foresight to bring in Ross. He has been on every list of young Scottish players we would like to work with.

“It has been a great week for me. The signing of Ross was a real shot in the arm, and it has been great to have the boys back who were not able to come to work. The atmosphere has been lifted and we are looking forward to a very important game.

“You always look at the type of people that you are going to bring in and he has got those leadership qualities. He has played over 100 games for two very demanding clubs and having to deal with that from a young age, he is well on the way to where he wants to be.

“He is only going to get better and we are delighted to have him here.

“Ross is an impressive boy. He is very competitive, he is very athletic, he has got good feet, he can play in a variety of positions, he is 22 years of age. He is going to play for Scotland and will be a huge player for Aberdeen in the years ahead. I couldn’t be more pleased to get him. 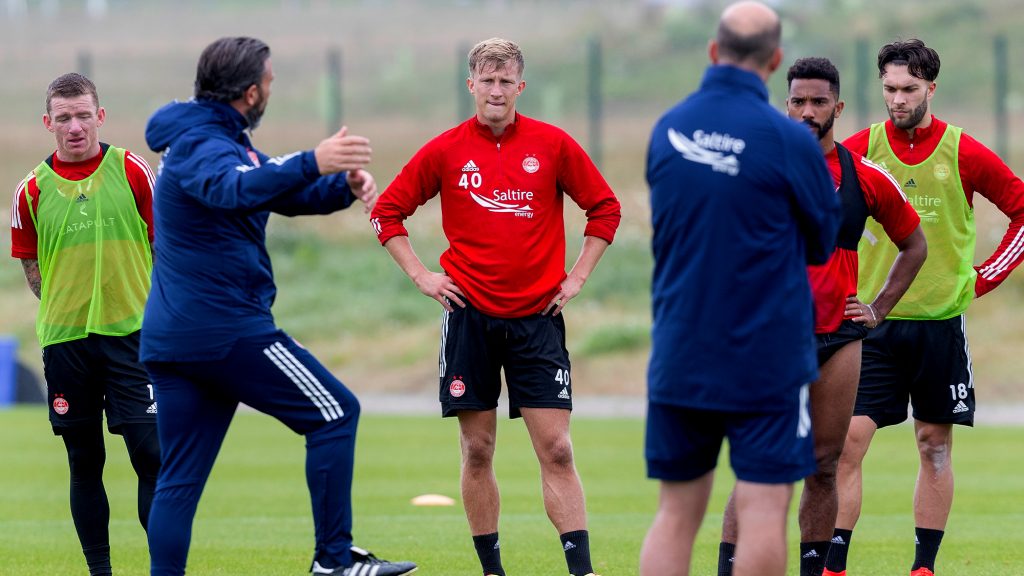 “Getting your first win of the season is pivotal to any manager to get you up and running and we have that opportunity on Thursday to try and do that.

“Hopefully we can get back to talking about football. There has been enough comment made, enough criticism made, and enough apologies made. There comes a time where you have to draw a line. It was our turn and now we draw a line under it.

“St Johnstone have started the season well and got a good result on Saturday.

“As the games go on teams get sharper, fitter and make better decisions. We would rather be a few games in. We have only played one competitive game in six months.

“It has been far from ideal. The boys are bursting to play. I wish we could play today. The fact that we have a game to look forward to is everything at the minute.

“All four of the players who have returned to training will be involved in the squad and will be able to play a part in the game if not all of the game.

“We go into the game tomorrow without three centre halves and four strikers, it is far from normal. We are trying to deal with the situation as best as we can. Thankfully the board have that understanding of the current circumstance.

“We still feel Ryan has a part to play for us. I spoke to him the other day and he is very positive. He is normally a quick healer and Leeds are positive that we can get him back before the loan expires. There are plenty of games in November and December and potentially a cup final. He will stay at Leeds for the initial part of his rehab and then come back to us when he is a bit closer to getting back onto the grass.

“Michael Ruth is in the squad. He has been training with us since early June. He is the only striker that we have in the building who can play as an out and out striker. 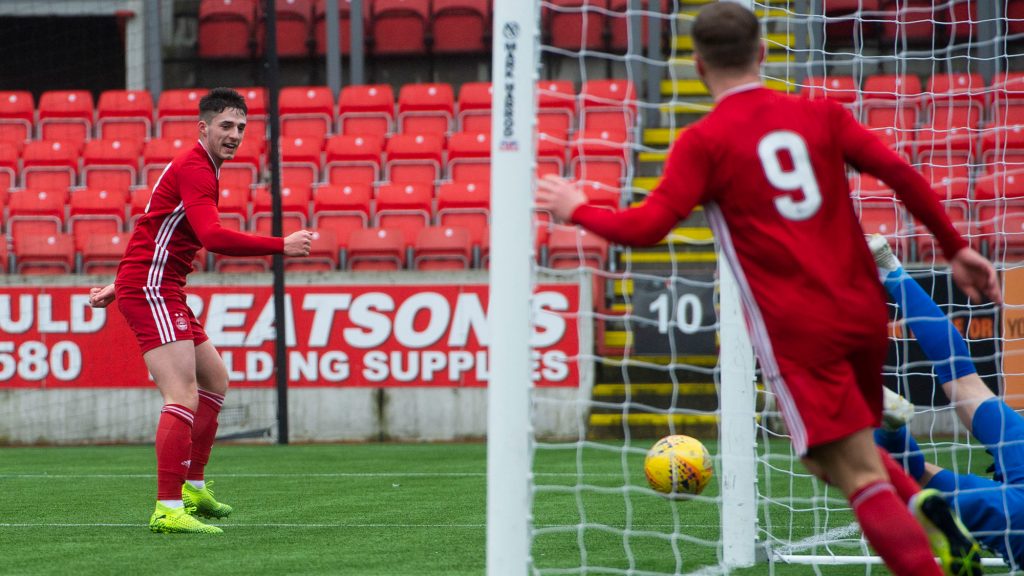 Getting back to football

“It is a game of football that the two teams, who have a healthy regard for each other, will see it as a game they can win. We look forward to setting about the game and getting the three points. 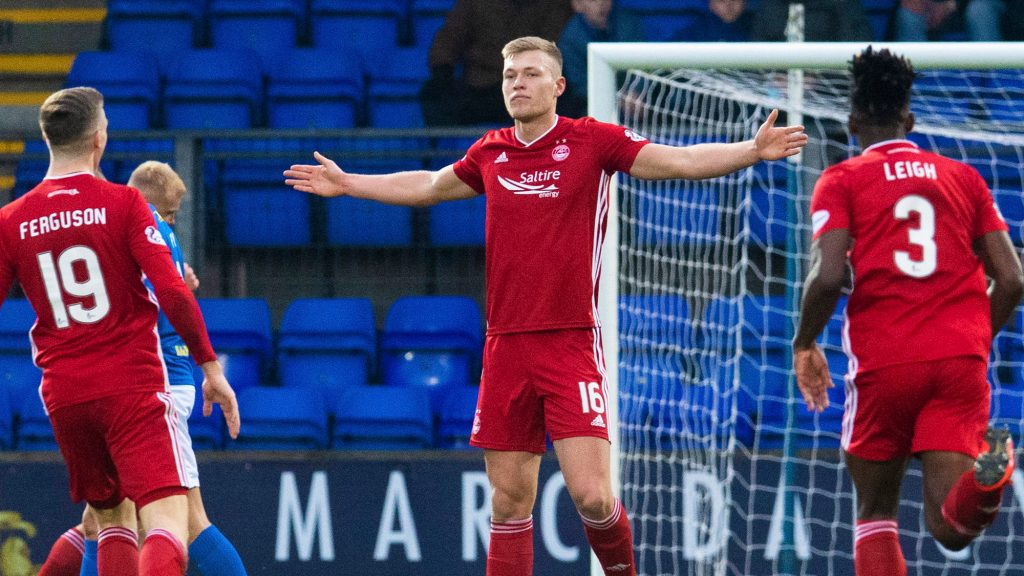 The sides last met in Perth back in November in what was Andy Considine’s 500th game for the club. Sam Cosgrove put the Dons in front with a well taken long range strike before Matty Kennedy equalised for St Johnstone. Despite the Perth side finishing the game with nine men after red cards for Callum Hendry and Murray Davidson the Dons could not find a winner. 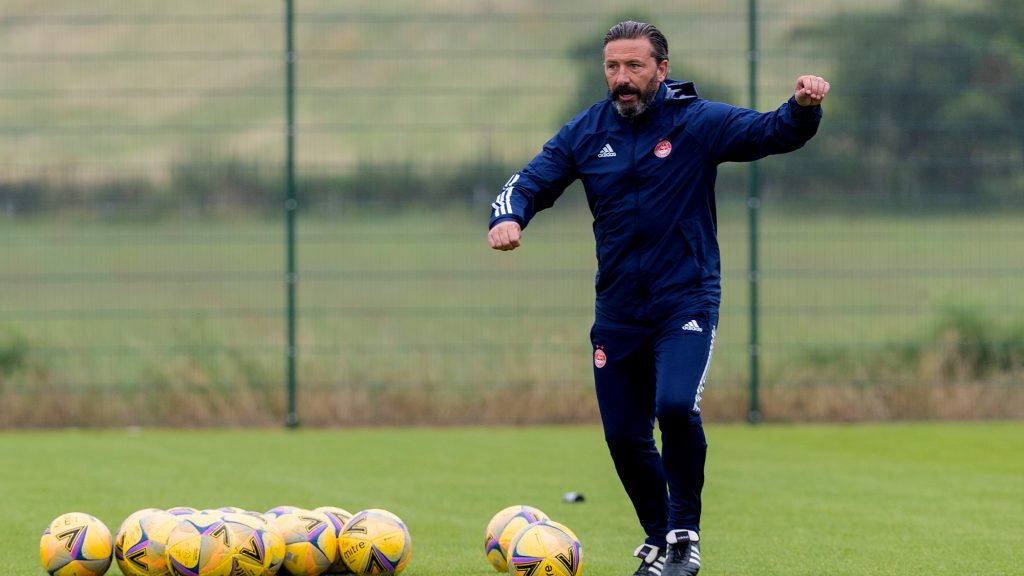 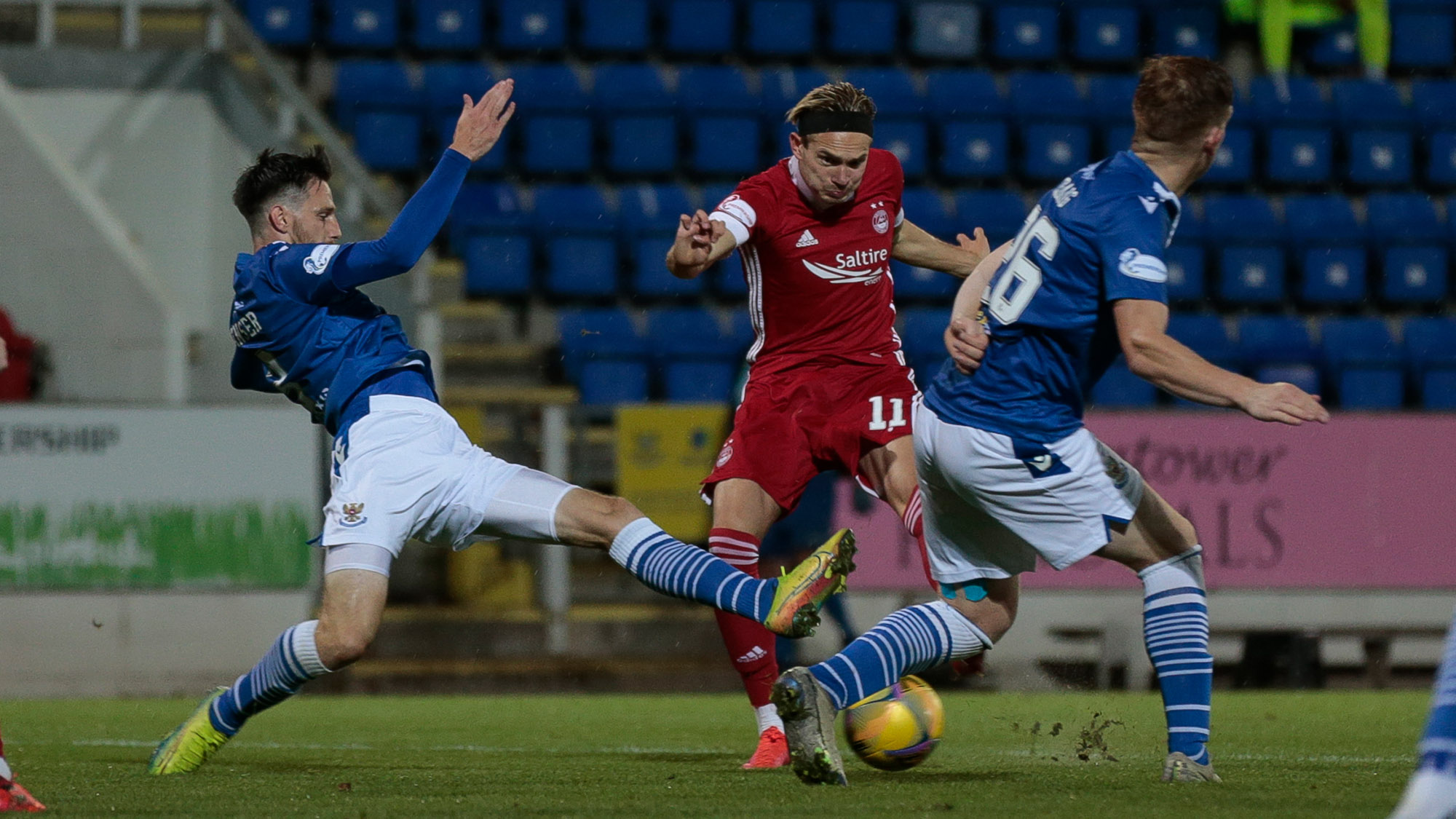 After a torrid couple of weeks for the football club, Aberdeen dug really deep on a drizzly night down at McDiarmid Park to bring football back to the forefront of everyone’s minds, put three points on the board and get the 2020/21 campaign properly underway.

Some 19 days after opening the season against Rangers, Derek McInnes made five changes to his starting XI for the trip to St Johnstone. In came debutant Ross McCrorie, just three days after joining from Rangers, Niall McGinn, Tommie Hoban, Dean Campbell and Scott Wright, while added to the bench were youngsters Michael Ruth and Jack MacKenzie. Missing out were Scott McKenna, Bruce Anderson, Craig Bryson and Matty Kennedy – the latter two taking a place on the bench – along with the suspended Andy Considine whilst Michael Devlin, Sam Cosgrove, Curtis Main and Ryan Edmondson also joined the long unavailable list.

Having had the full hand of a win, draw and a defeat in their opening three games, the Saints made just two changes from their 2-1 win at Kilmarnock last Saturday, where they grabbed both goals in the last five minutes. David Wotherspoon, who scored the equaliser against Killie, and Jamie McCart came into the side at the expense of Shaun Rooney and Craig Conway who dropped to the bench, Saints naming just seven subs.

The Dons started with McCrorie, Ash Taylor and Hoban as a back three with Ronald Hernández and Jonny Hayes at wing-back. Funso Ojo, Dean Campbell were in the centre of the park, Niall McGinn and Scott Wright either side of Lewis Ferguson up front.

McGinn had the game’s first shot on target, played in by Wright after the Dons caught St Johnstone napping down the right with a quickly taken throw in the eighth minute, Parish saving comfortably. That aside, with both sides looking rusty, it was a scrappy opening, interrupted by a snapshot from McNamara from the edge of the box which forced Joe Lewis to push the ball over on the quarter hour.

Hendry required treatment in the 26th minute after going up for a header with Ash Taylor but he was eventually able to resume. Good defending from Taylor then prevented Hendry getting away a shot after he picked Campbell’s pocket in midfield and surged 30 yards towards goal.

Aberdeen began to come onto their game as the half wore on and Funso Ojo wasn’t far away from an opener in the 38th minute after some terrific possession football from the Dons. A great touch and turn from Wright got him running away from a defender before feeding Jonny Hayes, and his cross to the back post was met acrobatically on the volley by Ojo, the ball flashing back across goal and just wide.

There were changes at the break for the Dons, Matty Kennedy and Connor McLennan joining the fray in place of Dean Campbell and Ronald Hernández, McLennan going up front with Ferguson dropping back into his more familiar role in midfield.

Hendry had the second half’s first sight of goal, slicing wide from the edge of the box in the 51st minute. Almost immediately, Ferguson collected the first yellow card of the game for a challenge on O’Halloran. Saints won a corner from the free-kick to keep the pressure on but it came to nothing as the game returned to its early first half torpor with the rain lashing down.

Parish made a straightforward save from a McGinn lob in the 64th minute after good work in holding the ball up from Ojo, though the players were still clearly searching for match sharpness in just the second game of the campaign – though in all honesty, Saints didn’t look any more lively.

Hoban should have had the Dons in front in the 68th minute, McGinn’s free-kick coming in from the left, Hoban climbing highest at the back post but glancing his header wide of goal when the chance was there to score. Bryson then replaced Ojo for Aberdeen, Conway on for Hendry for the hosts. Things were looking brighter for the Dons now, Kennedy firing in a dangerous cross from the right in the 73rd minute, St Johnstone doing well to clear their lines.

The hosts made their next change in the 76th minute, Olaofe replacing Wotherspoon up front, the Dons making another switch with the introduction of Ryan Hedges for McGinn three minutes later.

That change became a masterstroke three minutes later, Hedges picking the ball up on the right wing before cutting inside, into the box and driving in a low shot that clipped Gordon on its way into the bottom corner. Shay Logan immediately came on for the first time this season in place of Wright as the Dons looked to see things out.

Rooney and Robertson were then thrown on by Saints in the 85th minute in place of McNamara and Gordon as they tried to salvage the game. It almost worked, Conway immediately slashing a shot through the box and just wide.

Tempers started to fray in the dying stages, Hedges and Craig going into the book for an altercation on the touchline, McCrorie joining them after stretching into a tackle on O’Halloran. But as Saints became more frustrated, Aberdeen saw it through to the 90 minutes, marshalled brilliantly by man of the match Ash Taylor, taking the three points back up the road to the very obvious delight of the players, a post-match huddle between players and manager underlining the real togetherness there is in a squad willing to fight to the end for one another.