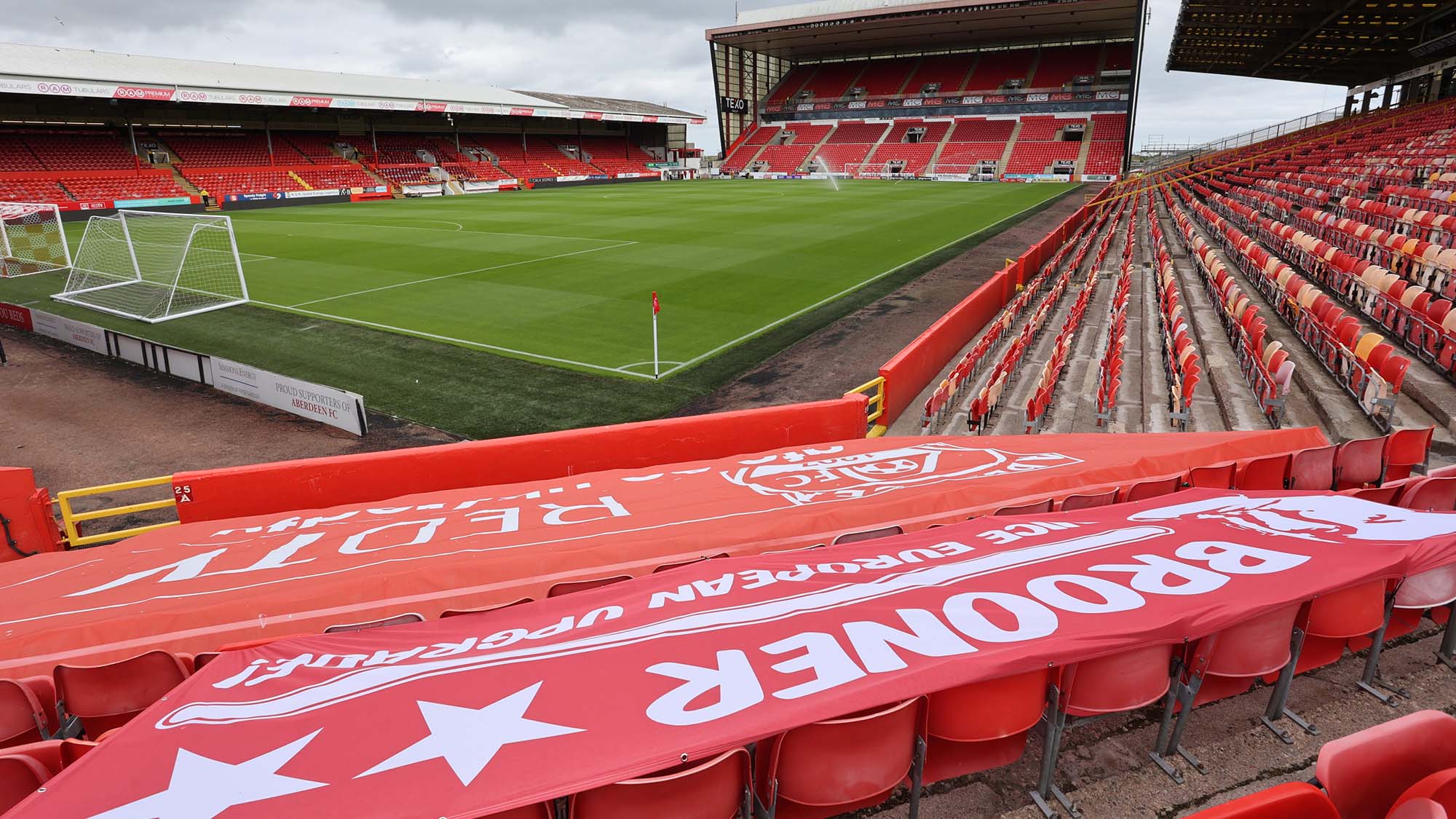 The manager previewed our final game before the international break, with the media, via zoom, from Cormack on Thursday lunchtime. To watch in full on RedTV, please click here. 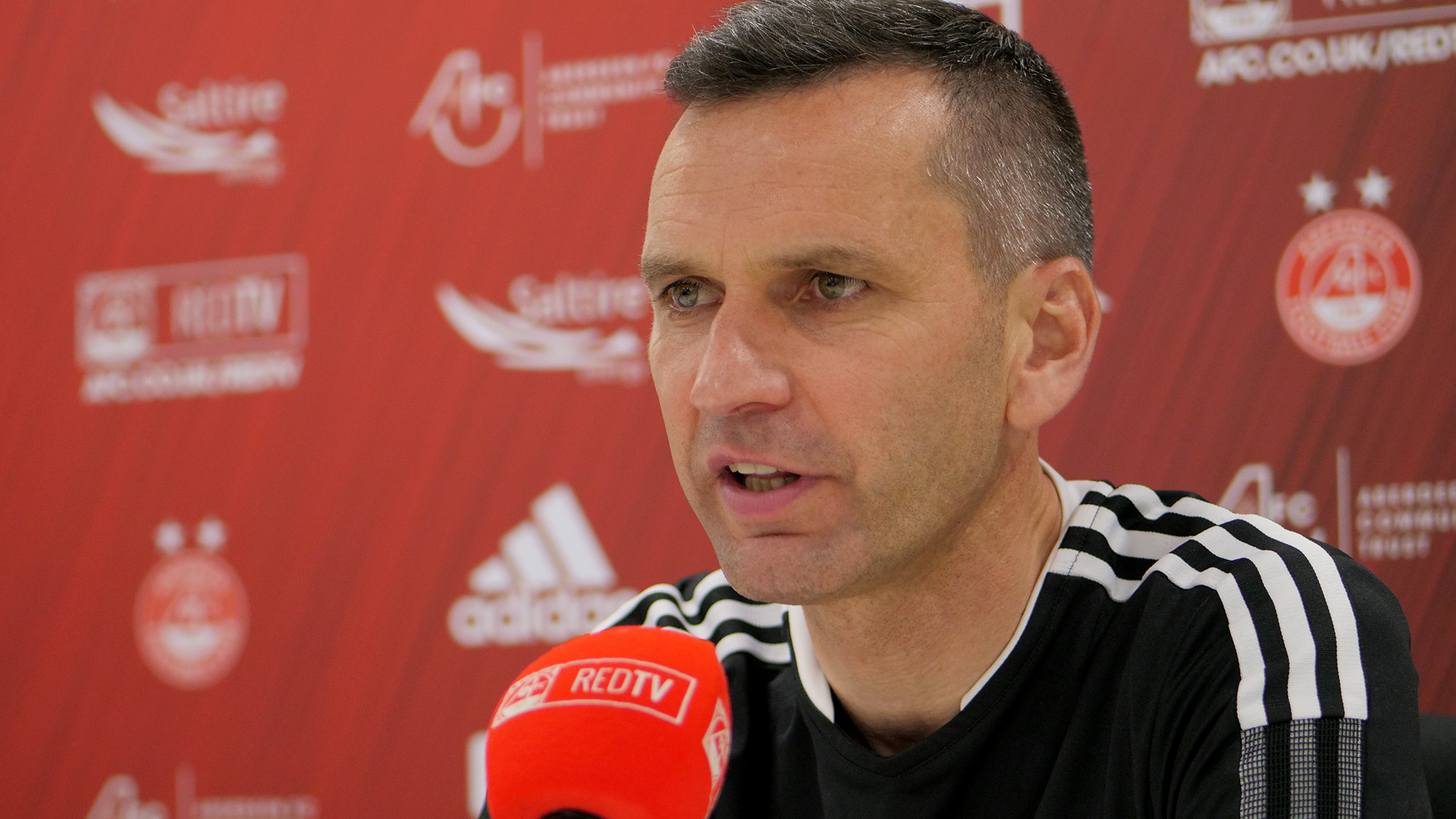 “Everybody knew this was coming when Scott agreed to come here. He has already dealt with a bit when he played for Celtic against us last year and we knew he was coming. It won’t affect him. He wants to win football matches. It will be a chance for the Celtic fans to say hello and goodbye to him because they never had that chance last year. The overriding thing for us is that Scott is determined to win a game and I don’t think that ever changes. That is why he is what he is.

“Anybody who knows Scott knows there are no mixed emotions when he pulls on the jersey and he is playing at the weekend. This weekend coming you won’t see any mixed emotions from Scott. I don’t think the Celtic fans and players will expect any different just as we didn’t last year knowing he was coming.

“It is one of the reasons that we brought him here, to win games. Without knowing the stats, I am not sure the last time that he lost at Pittodrie in this fixture? It is probably a long, long time. It is important for us that it continues and if he can continue that personal run it would be great for us. I hope that happens for Scott and the group of players. 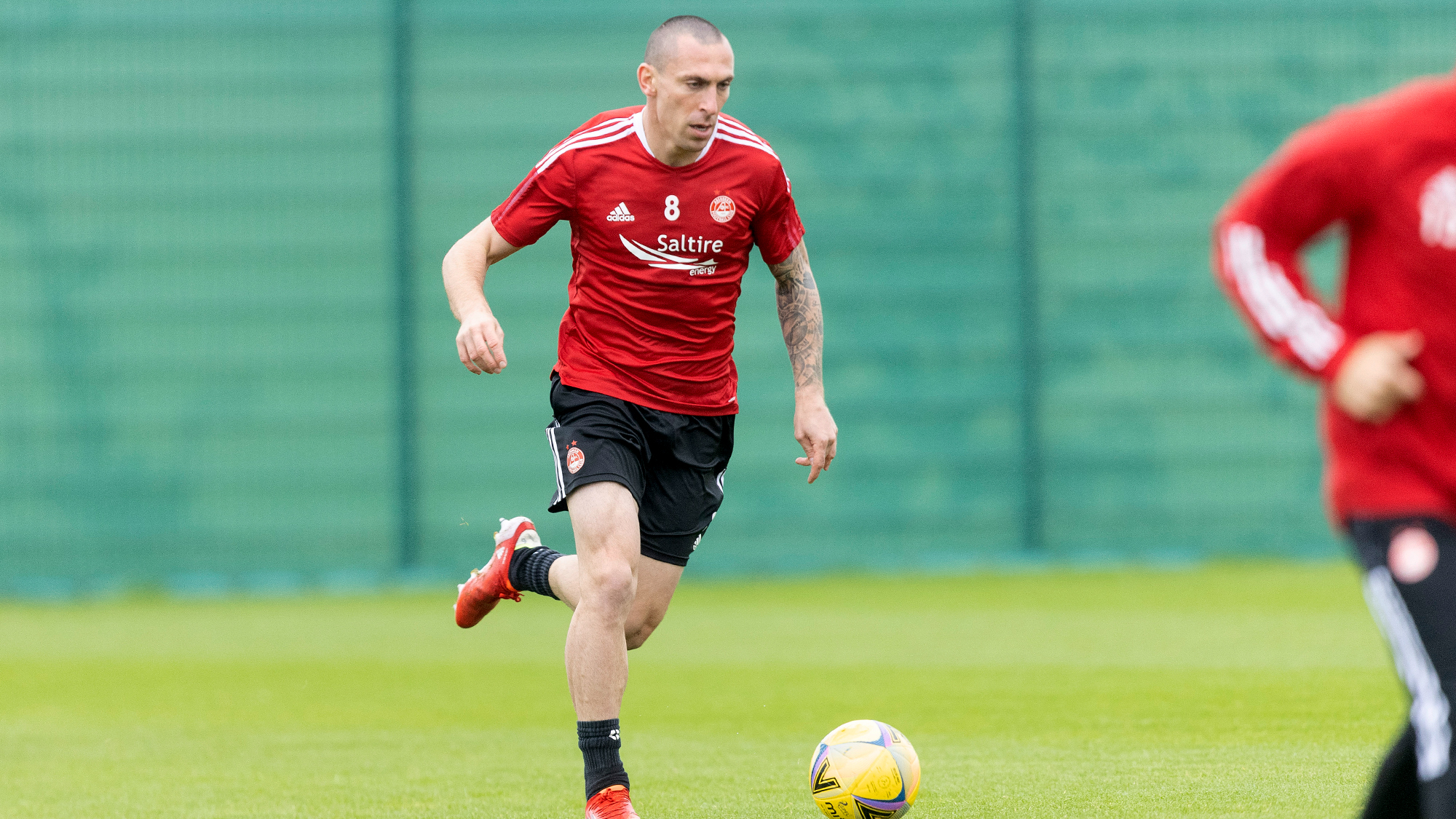 “The mood is good. We are aware of the situation that we have not got the points that we feel that we should have or got the points that we feel that we deserve. It is important that we start to get them quickly. We are looking forward to a big occasion, we know there is a big crowd coming, an atmosphere that has not been in the stadium for a while with a big, noisy away support expected. It is a big occasion for us to show what we are capable of.

“There are a group of fixtures coming up where every team we play against are up at the top end of the table. That would underestimate what we have played so far, we haven’t had an easy ride. We have played a lot of games coming off the back of European fixtures. We will have a group of players who are prepared for the game on Sunday. We then head into the international break and then it is Dundee, Hibs, Rangers, Hearts. We know what is coming but we are capable and prepared.

“We have no fresh injuries from last week other than Teddy is unfortunately suspended. 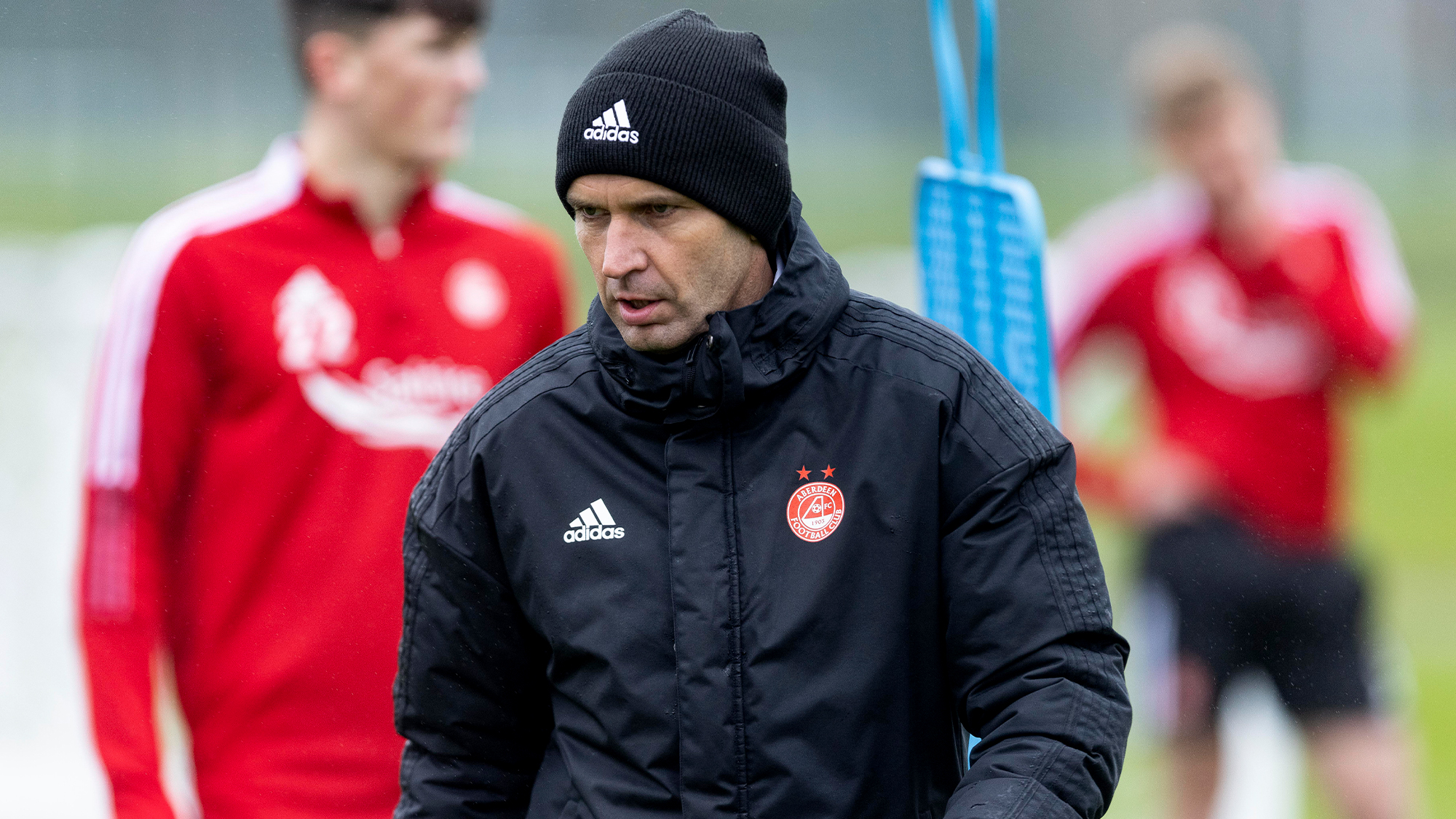 “Anytime that Celtic come to town it is a big game. For us it is an opportunity to get three points and that is the way that we look at it here. The last few games we have dominated at home. It might be slightly different at the weekend but that is what we will try to do. We are playing a team who will be equally as determined as us to dominate the game, which is a little bit unusual at home but it is something that we will be prepared for. We are looking forward to the game and I think it will be a good game of football.

“Celtic playing on Thursday in Europe could mean they could get a bounce from a big performance and a win or they could feel tired and sorry for themselves if they don’t. We will not underestimate them by any means, we will look after ourselves which is what we do every week and I think if we look after our own business we give ourselves a big opportunity to win. As always with football we will have full respect to the opponents. We are coming up against one of the strongest groups of players in the country with a manager who has got them playing in a certain way, difficult to play against, with real quality footballers in their team. For me it is us who we focus on.

“I see a group of players who are very good on the ball, they have not had the results that their play deserves and they will be looking to make it right. That is what we expect from the weekend. They have got a certain way of playing that we feel that we can affect. We focus on the things that we do and there concerns are their concerns. They have got a big game on Thursday and another big game on Sunday. We look forward to welcoming them.

“There is determination in our group every week. I think that you saw last week a performance that if it was XI v XI we would have come out of there with three points, if we continued to do what we were doing. I have not got any concerns on the quality or the determination of this group of players and I have not had since the start of the season. They have proved it every week with their effort levels and their quality. Individually at times it could have been slightly better but the players are capable of giving a bit more quality wise. When that clicks into gear I think we will be okay.

“We are looking for something to spark a little bit more confidence and a run of points coming on board. Everyone is talking about a tougher run of fixtures coming up, but when you play the ones who are above and around you it gives you a chance to catch them. We will have that opportunity when that comes up as well. On Sunday you will see a group of players who are determined to put things right as they have been for the last few weeks with just a little bit missing.

“You learn a lot more about people and yourself when times are tougher than you would have liked, otherwise it would be smooth all the time and you can plod along thinking things are great but they are not, it can hide a lot of things. It perhaps magnifies issues that have cost us games at both the top and bottom end of the pitch. It heightens your awareness of that, it makes you more determined to fix it and I think long term we will be better for it. You would rather everything is smooth but you don’t walk in with a magic wand thinking everything is great. We have a number of new players and new staff, it can take time to bed in. People who have been coming to the games can see the direction we are going in. 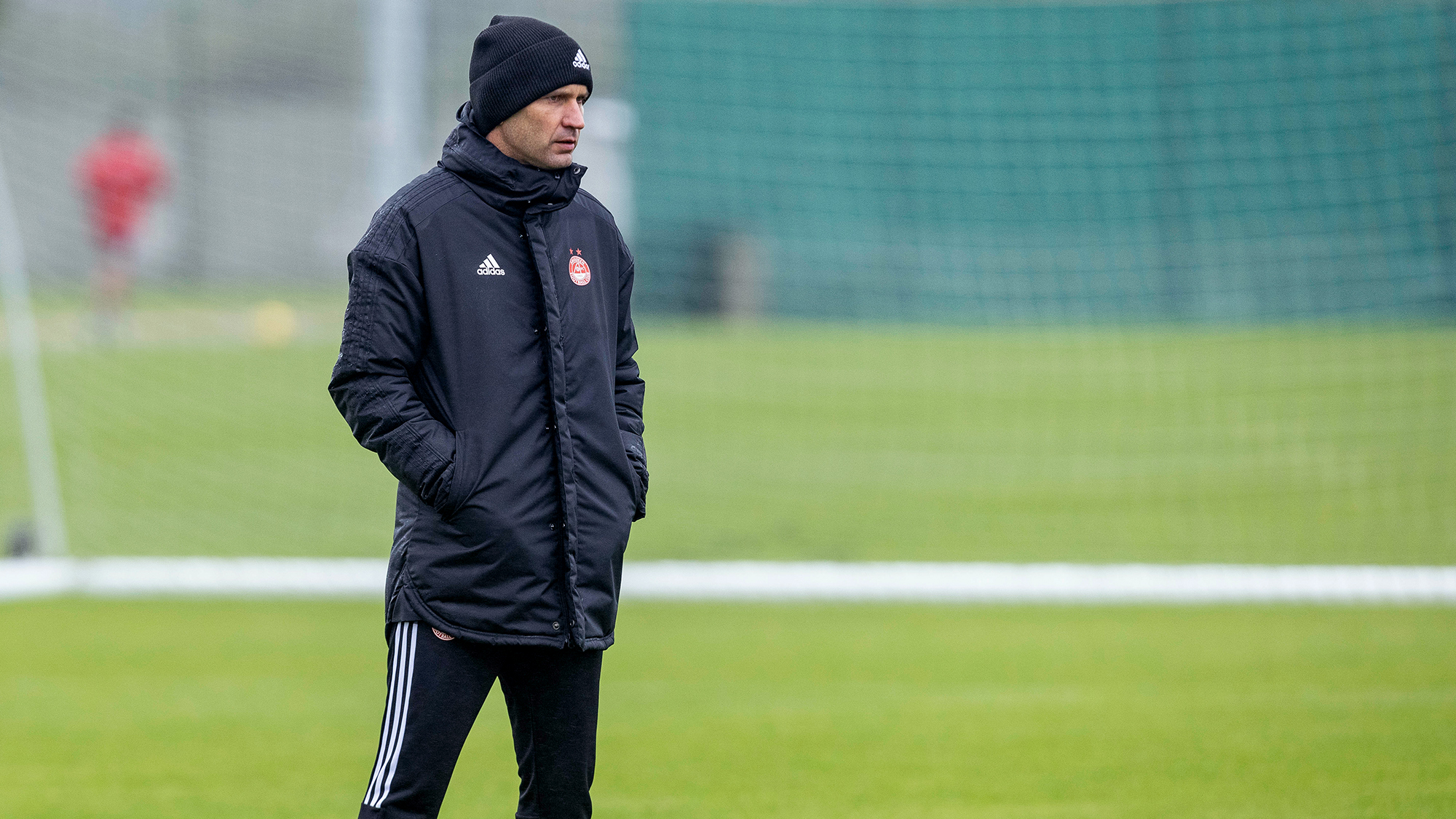 “I am aware of stories coming out. It happened as long ago as when I was playing that the week that you play Celtic or Rangers, stories in the press start appearing. There is nothing new there! It doesn’t surprise me in the slightest that Calvin is attracting interest from a lot of clubs. There is nothing to report on it.

“He has been brilliant since he came into the team. Calvin’s ability and professionalism will dictate where he ends up. The signs are brilliant so far. It is up to him to keep performing and concentrating and blocking out all of the stuff and the stories that come in.” 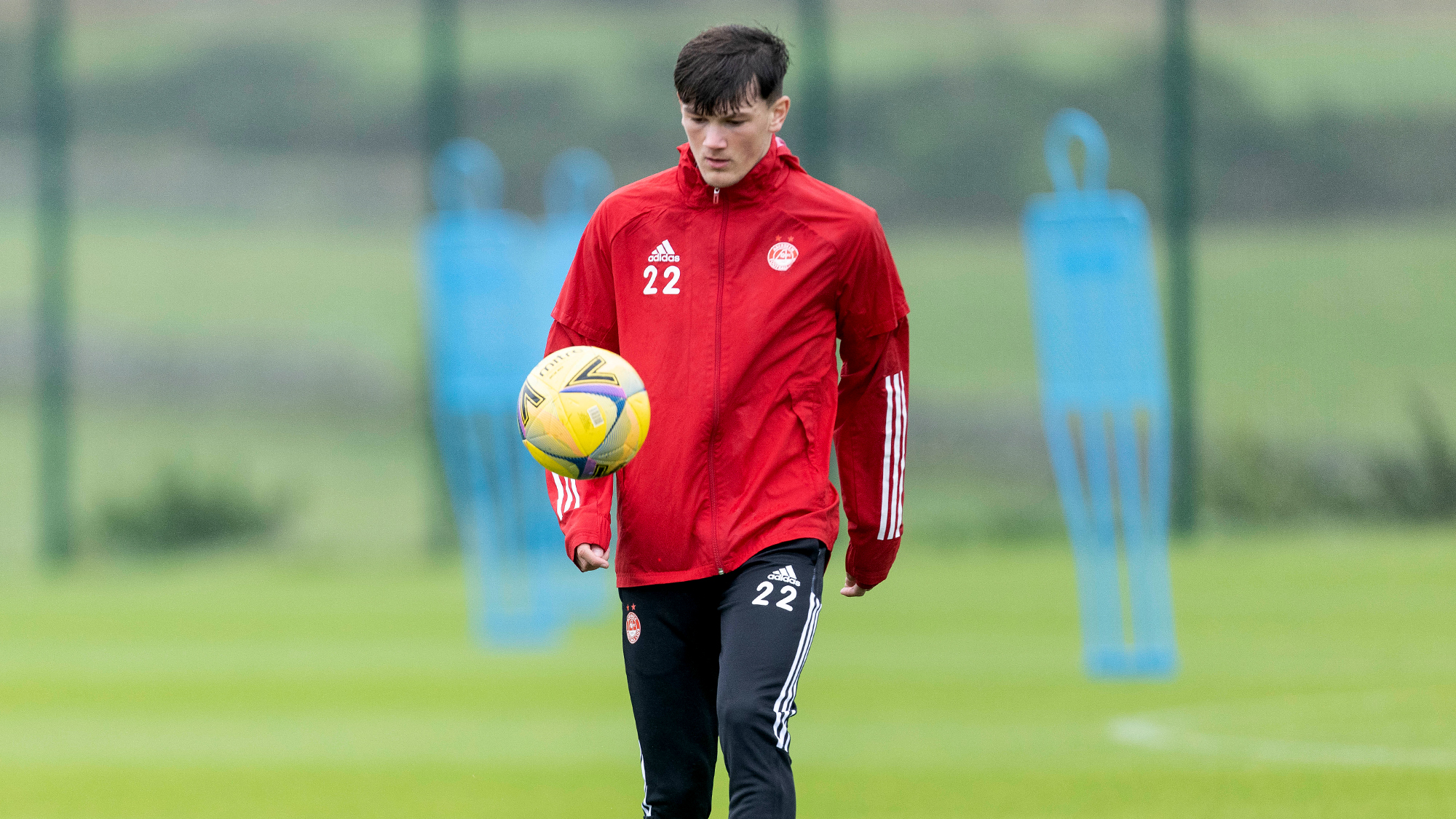 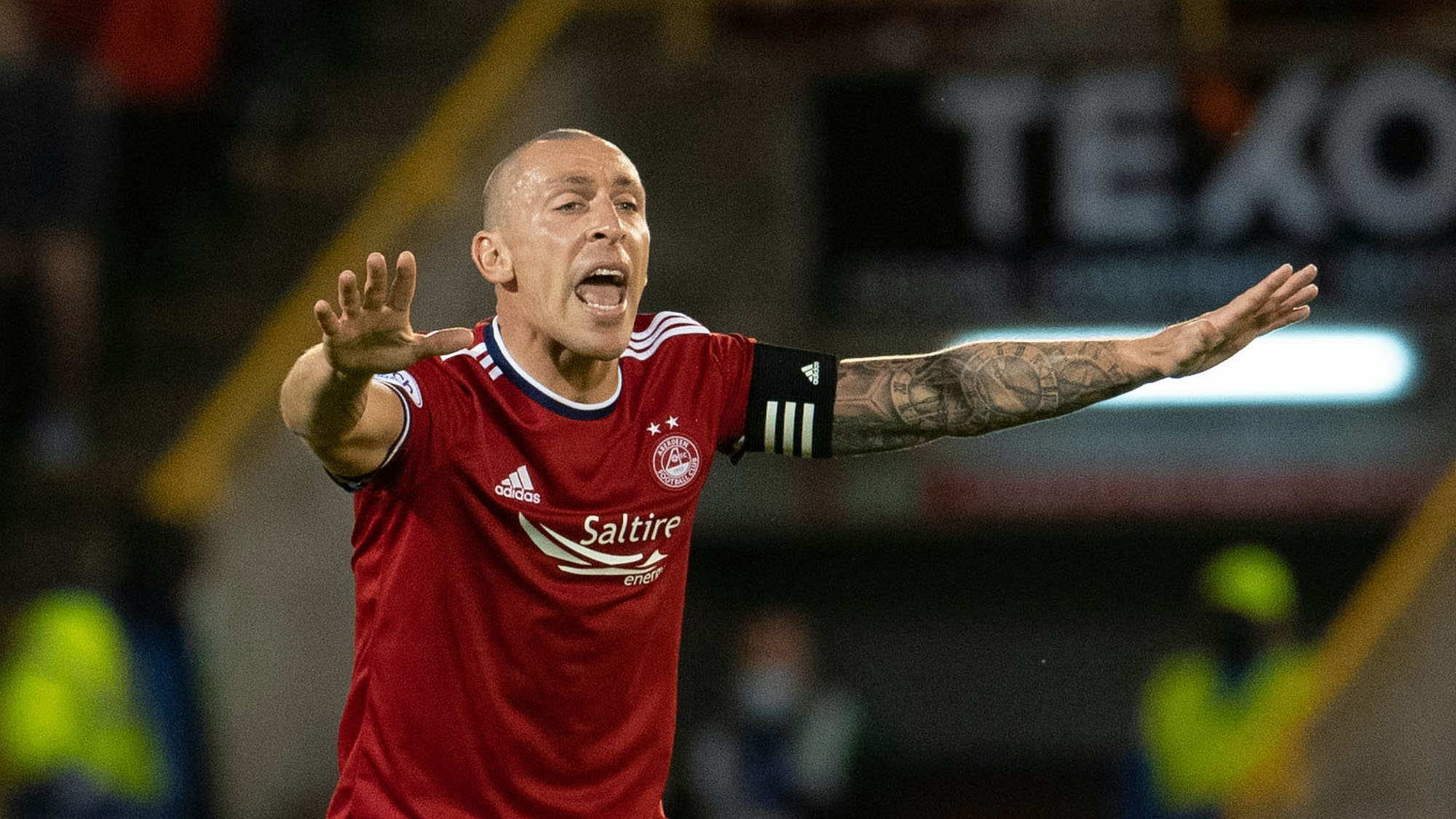 Stephen Glass was left to repeat himself as the Dons slipped to late defeat at home to Celtic this afternoon. 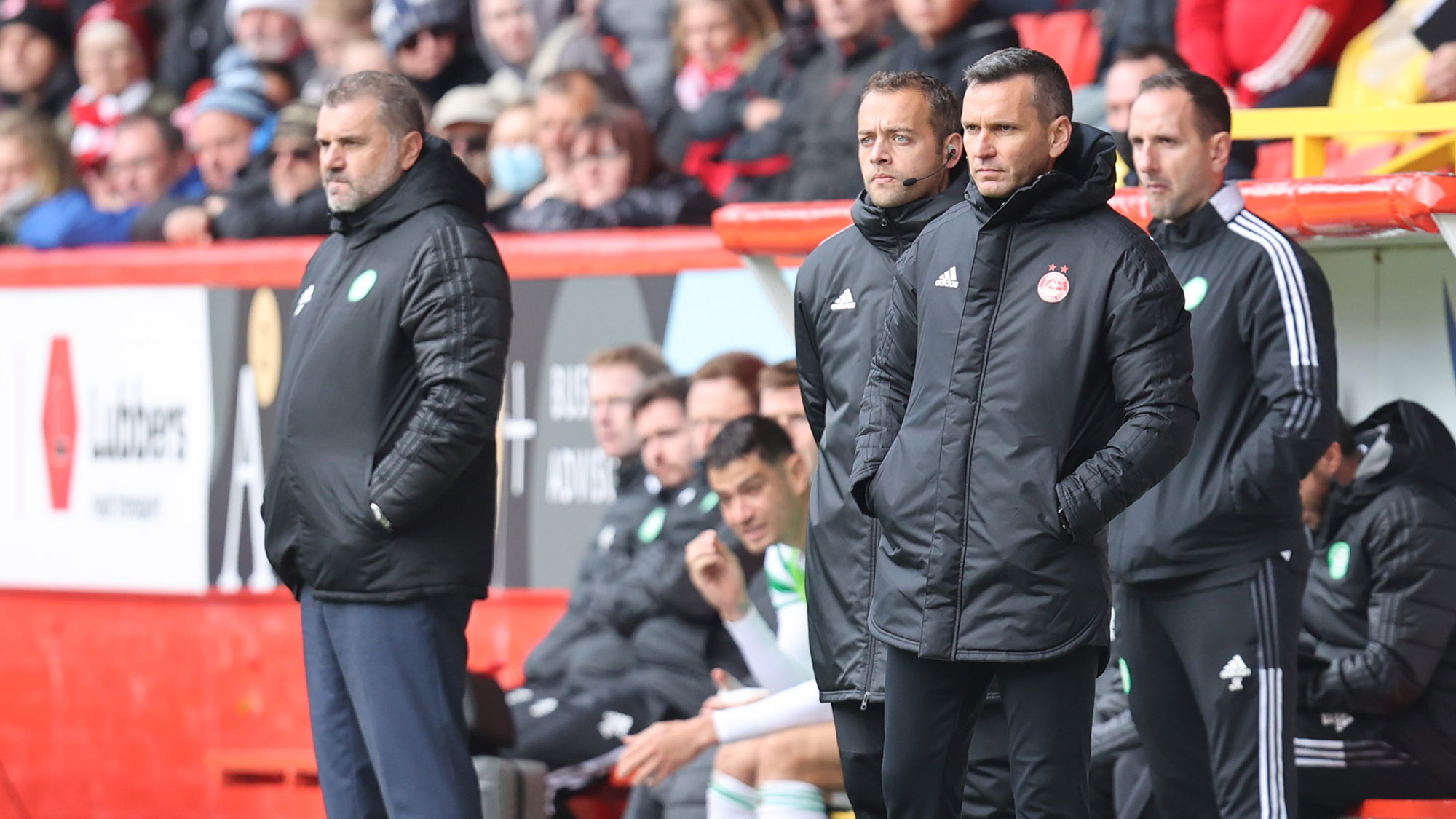 Stephen Glass was left to repeat himself as the Dons slipped to late defeat at home to Celtic this afternoon.

“I’m sure people are sick of hearing the same message, same as I’m sick of dishing out that message, but the truth is there were positives to take from this afternoon, but we have to learn quicker than we have been.

“We need to start getting points on the board pretty quick. You can see a group of players that believe in what they’re doing, that aren’t a million miles away from where they need to be. But we have to put a stop to the individual mistakes defensively.

“The first goal, they made a quick restart, which we had banged on about all week. Celtic like to get the ball back in quickly and get things going, we didn’t cope with that and then the defending of the cross has to be better, which has been a theme this season.

“Any time you lose, especially to a late goal, it’s disappointing, especially after the response in the second half was so good. First half we weren’t great, we didn’t really get the pressure right, we weren’t brave enough on the ball, nor out of possession either. But the way we responded in the second half, I feel we should have come out of there with a point.” 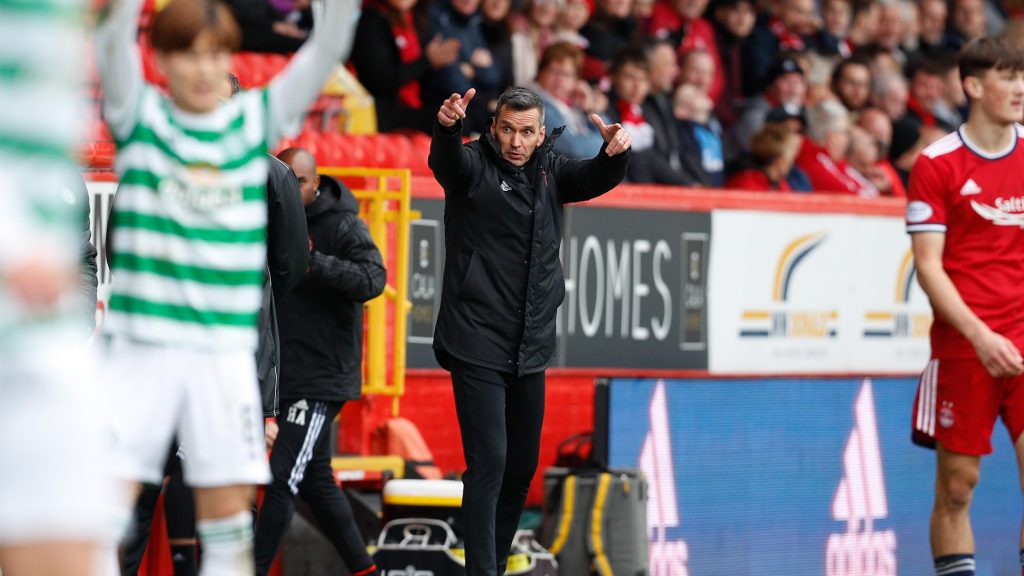 There were three changes to the starting XI today, including a first start of the season for goalkeeper Gary Woods.

“I didn’t want to make too big a thing of changing the goalkeeper. Joe and Woodsy are competing for a place, just as the rest of the players are across the pitch, where nobody makes too much of it. It does get magnified because it’s the goalkeeper and because Joe has been the number one here ever since he came – if he’s fit, he’s played. During that period, every other team in the league has probably chopped and changed their goalkeeper a number of times.

“It’s important Joe gets back to being the goalkeeper he can be, and it’s up to Gary to make it difficult for him to get back in. Joe understands the position. Performances haven’t been what they should be, but that happens with all players. He just needs to work through it in training and get back to being the Joe Lewis everyone knows he can be.”

Austin Samuels produced another impressive display, particularly after the break, before he had run his race and was substituted.

“Austin is quick and positive. He’s not been able to train as much as he’d have liked since he came in, which is an issue when you add players late in the window, they don’t get that chance to bed in that others had in pre-season, they’re trying to catch up. Everybody can see the threat he carries and if he can start to produce that for 90 minutes instead of 60 or 75, we will become a more potent team.

“Losing games isn’t enjoyable, that’s obvious. What sustains us and gives us belief is that the players are working hard, we’ve got good players to come back from injury. We missed Ryan Hedges again today, there’s players like Marley Watkins, Funso Ojo to come back and that will help. So no, it’s not enjoyable at the minute, but I’ll enjoy fixing it.” 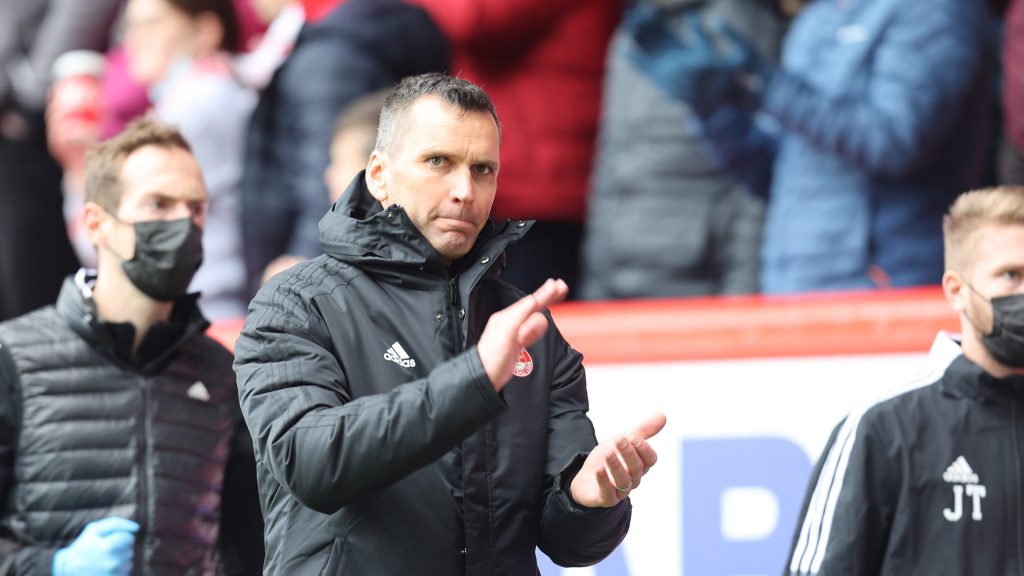