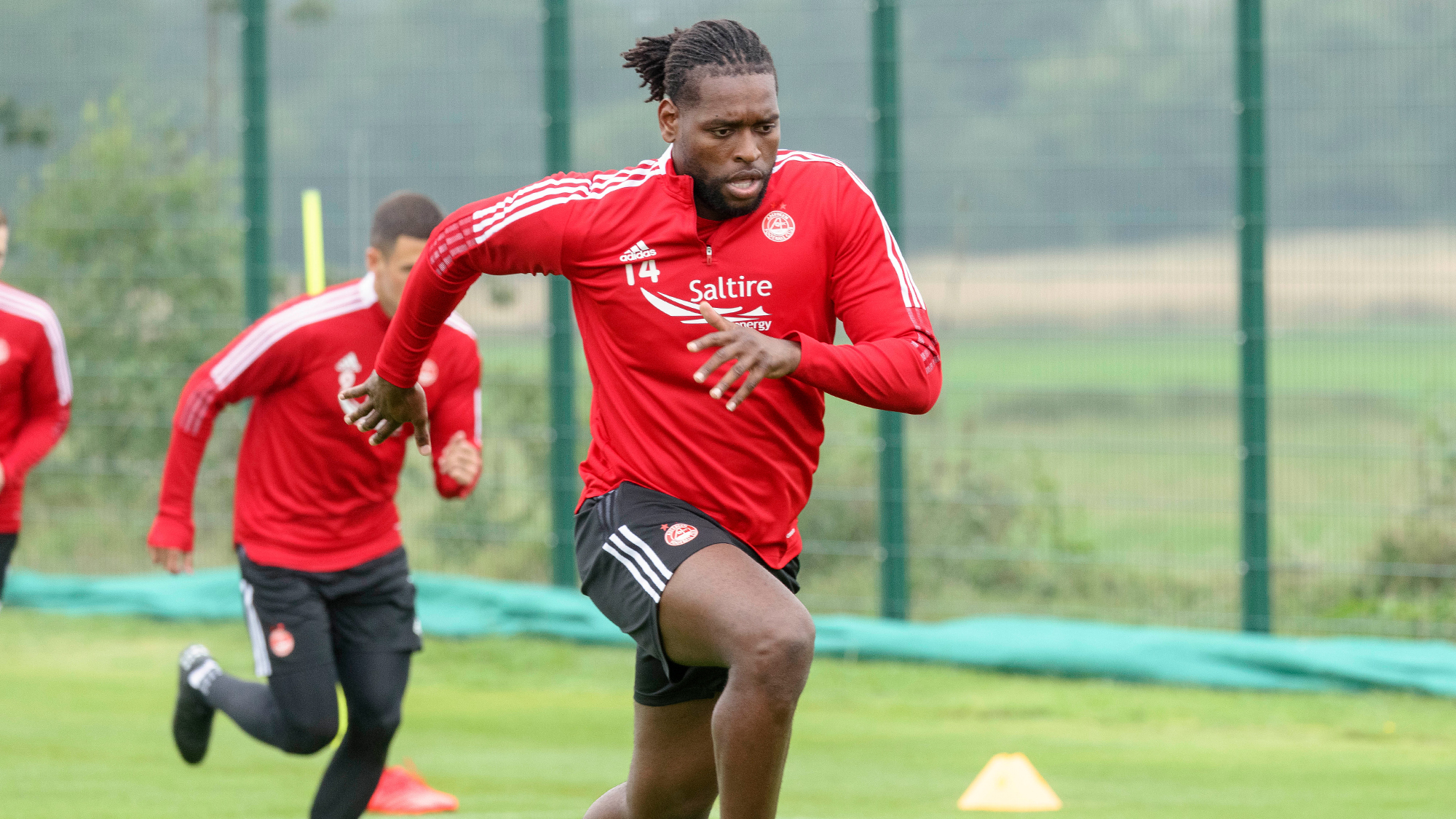 Watch in Scotland, Wales, Northern Ireland & the Republic of Ireland

The match is available to buy on pay-per-view through Motherwell for £12- please click here to buy. On matchday you can watch our RedTV match coverage by clicking on the ‘away club’ option. Please note that due to the UEFA blackout restrictions, this game is not available to purchase if you are in England.

Watch live coverage of every Aberdeen match only on RedTV! Subscribe now from £13.99 a month.

The programme will be on air live from Fir Park from 2.45pm.

RedTV subscribers in GB & Ireland can listen to a live audio feed of our Matchday Live programme hosted by Rob Maclean from Fir Park. Subscribe now from £6.99 a month.

The manager spoke to the media, via Zoom, to preview Saturday’s trip to Fir Park. To watch in full on RedTV, please click here. 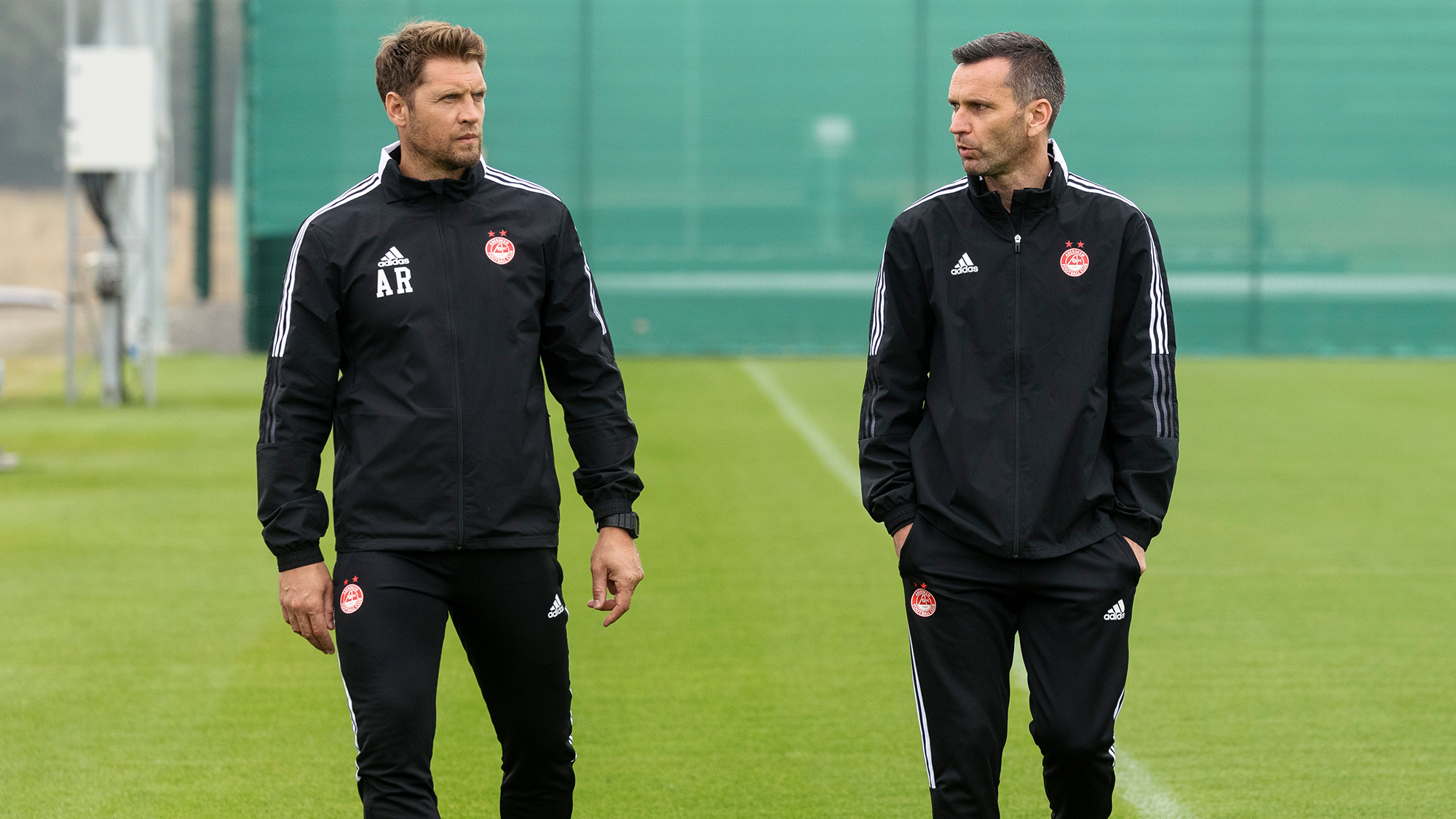 “Today is the first day that we have been able to get all of the players back. It is brilliant to have the group all back, you can sense that they are all looking forward to getting back out onto the pitch as well. We are looking forward to the weekend.

“Lewis Ferguson, Declan Gallagher, Calvin Ramsay, Dean Campbell were all away with Scotland and the U21s and Niall McGinn captained Northern Ireland. A lot of our players did a lot of big things over the international break so we are delighted for them.

“There are new players in at both ourselves and Motherwell. It will look like a different Aberdeen v Motherwell game that there has been over the last few years. It is a game that we are going into and are going to try and win.

“David has trained with the group and is ready to go. He has not played as much as football as he would have liked recently. It is a case of getting him up to speed as quickly as we can. 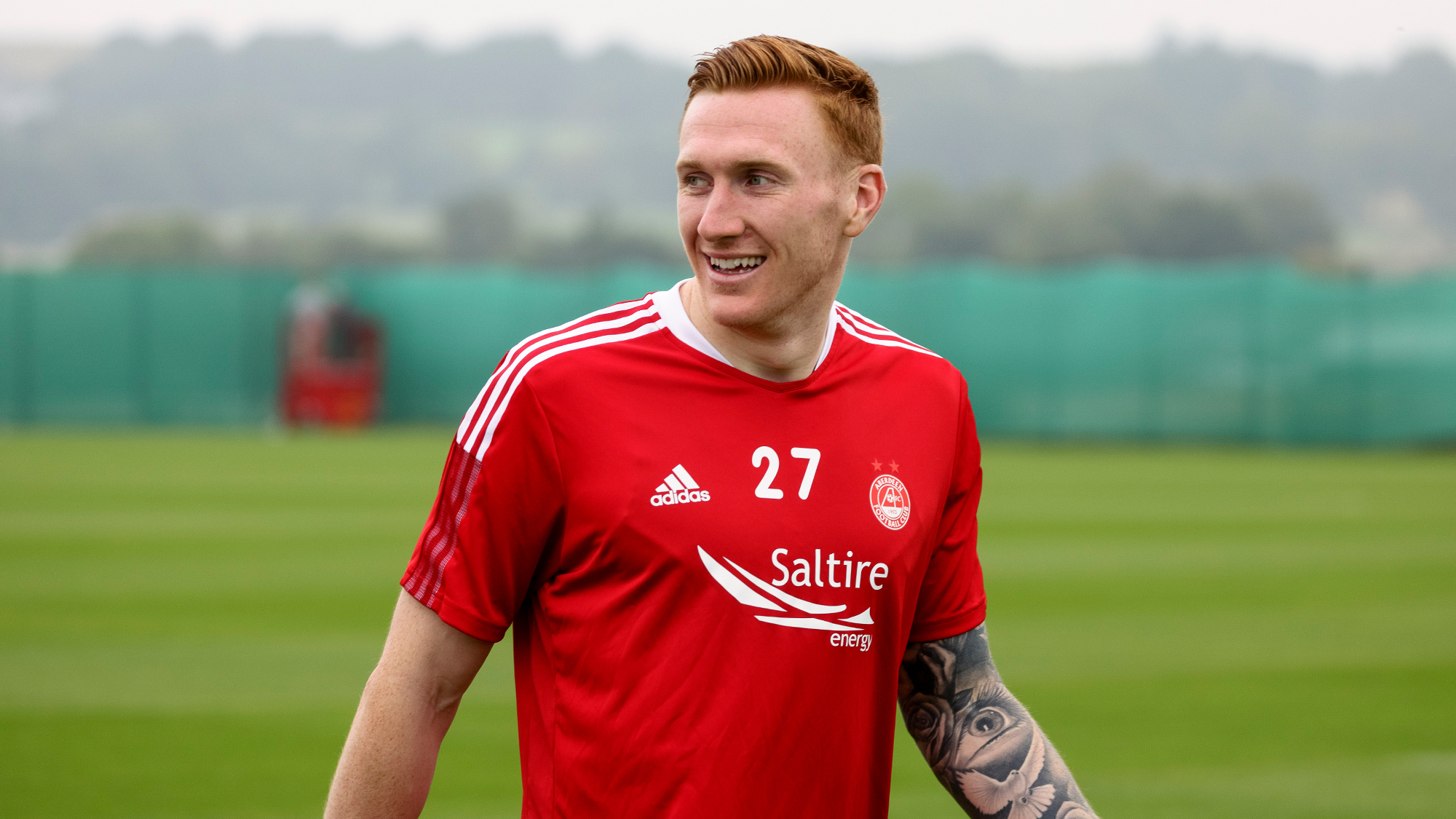 “We are pleased with the group that we have got and what we were able to add. We will see where we are at January.

“There is no doubt that the group of players is stronger than when we went into the transfer window, with the obvious exception of Andy. That is a long term thing that we can’t control. The fact that the European adventure came to and end means that we are going week to week. There are no midweek games between now and the next international break. We will get a real opportunity to work the team.

“Players come to clubs like this because they want to compete to play in the team. If it is easy to get into the team then you are not competing well enough and you are not at a club like this. We have got competition right across the board. Every position has got competition from the goalkeeper right through to the centre forward. If players are not playing well then it might be a little while until your opportunity comes back. You can sense it in the training. It is very competitive, players want to be better every day and it is up to us to make and mould that into a team that wins games. 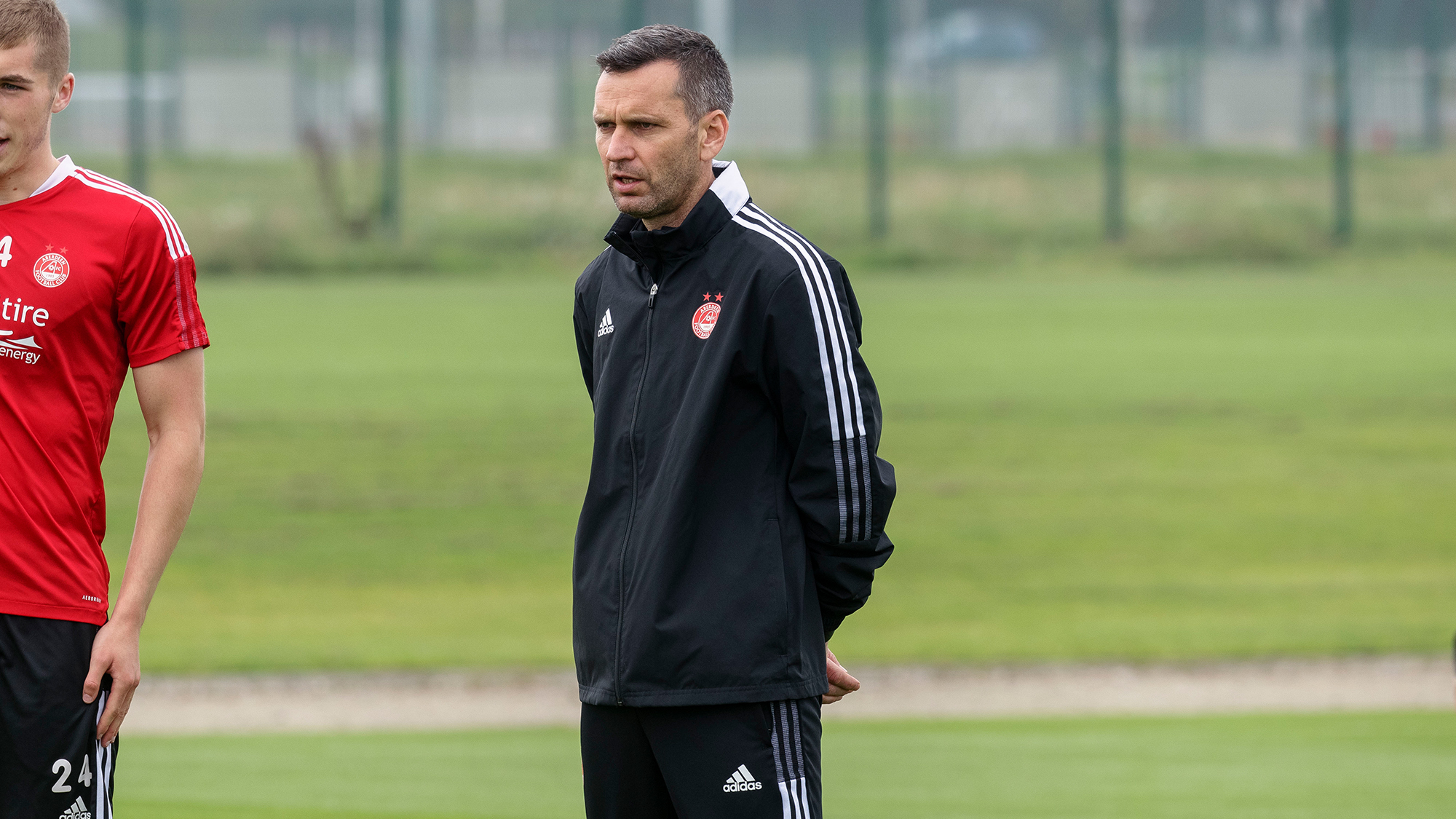 “Ryan is roughly a couple of weeks away. I am not going to put any pressure on that timescale. We have got reinforcements in which helps but Ryan will take as long as he takes and then he will be ready. We wont risk him at any point because he is valuable to us as a player. He offers us a lot and we are looking forward to getting him back on the pitch. 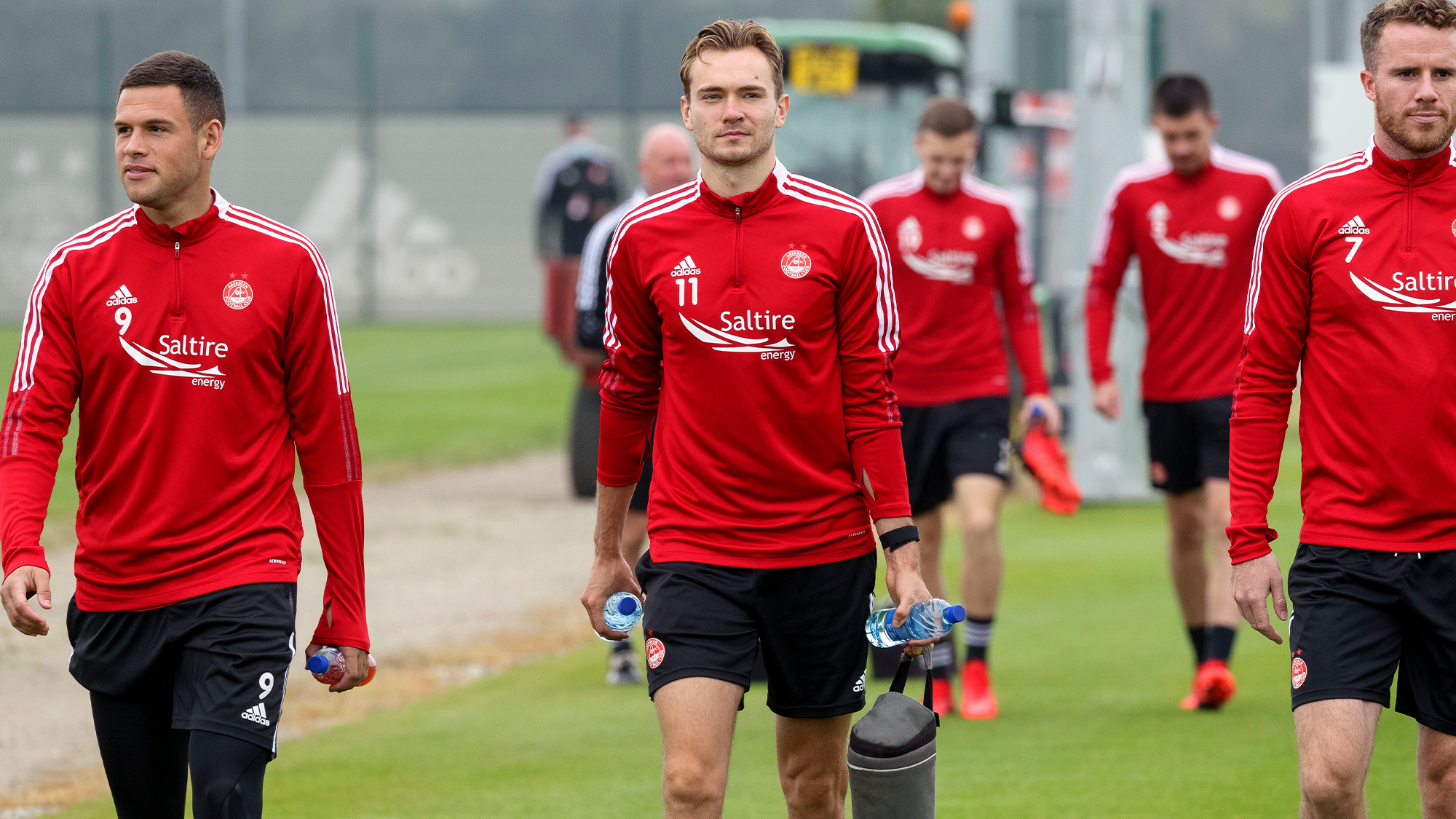 “Austin has been brilliant since he came in. He is a very open young man coming away from home but he has settled right in, he is good in the group, he is a popular boy and I think he is enjoying the training, the work and being up here. It is quite away from home for him! He said that when he came up that it was a long drive, which is a good thing because he won’t be looking to do it too often! The fact that we are near the airport means that he has that comfort level and he can get home if he needs to. He is in at a great club with people who will look after him and a lot of good teammates that are looking out for him too. We are excited to have him with us.

“We have been working on our principles. It has had a pre-season feel to it. You can’t do the teamwork as such because a lot of your team are on international duty but you can work on your own principles and the habits that they have got and their techniques. We have been pretty focused on that in the last little period and giving them enough break so they are fresh enough to hit this period and to go and win some football matches.

“Every team that goes into this break uses it to plan what is coming up immediately and what is coming up in the next month as well. I am sure they are no different but it is up to us to show that we have a group of players that can go and win against whatever they do on Saturday. It is a continual challenge and it is one that we are ready for.” 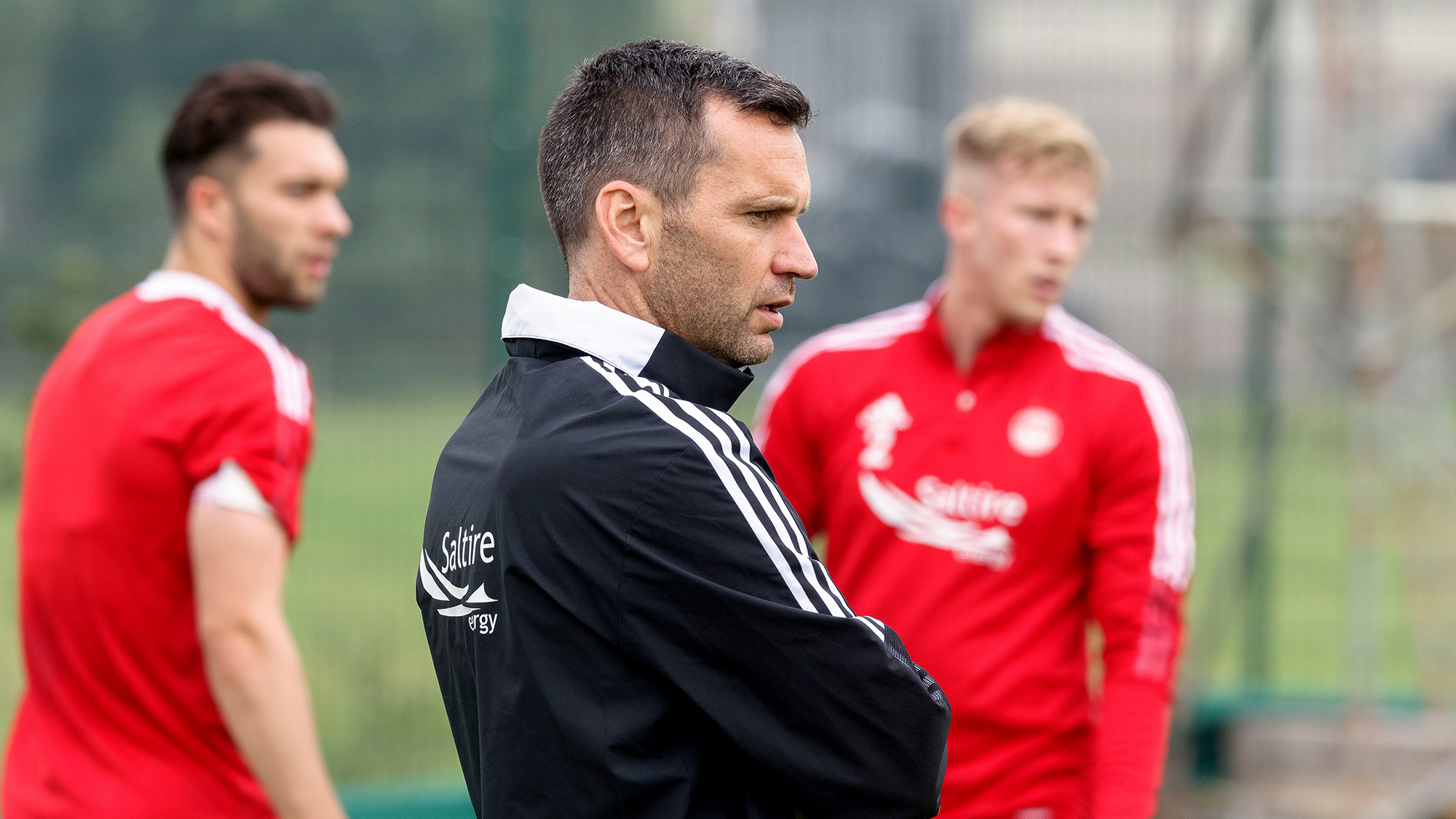 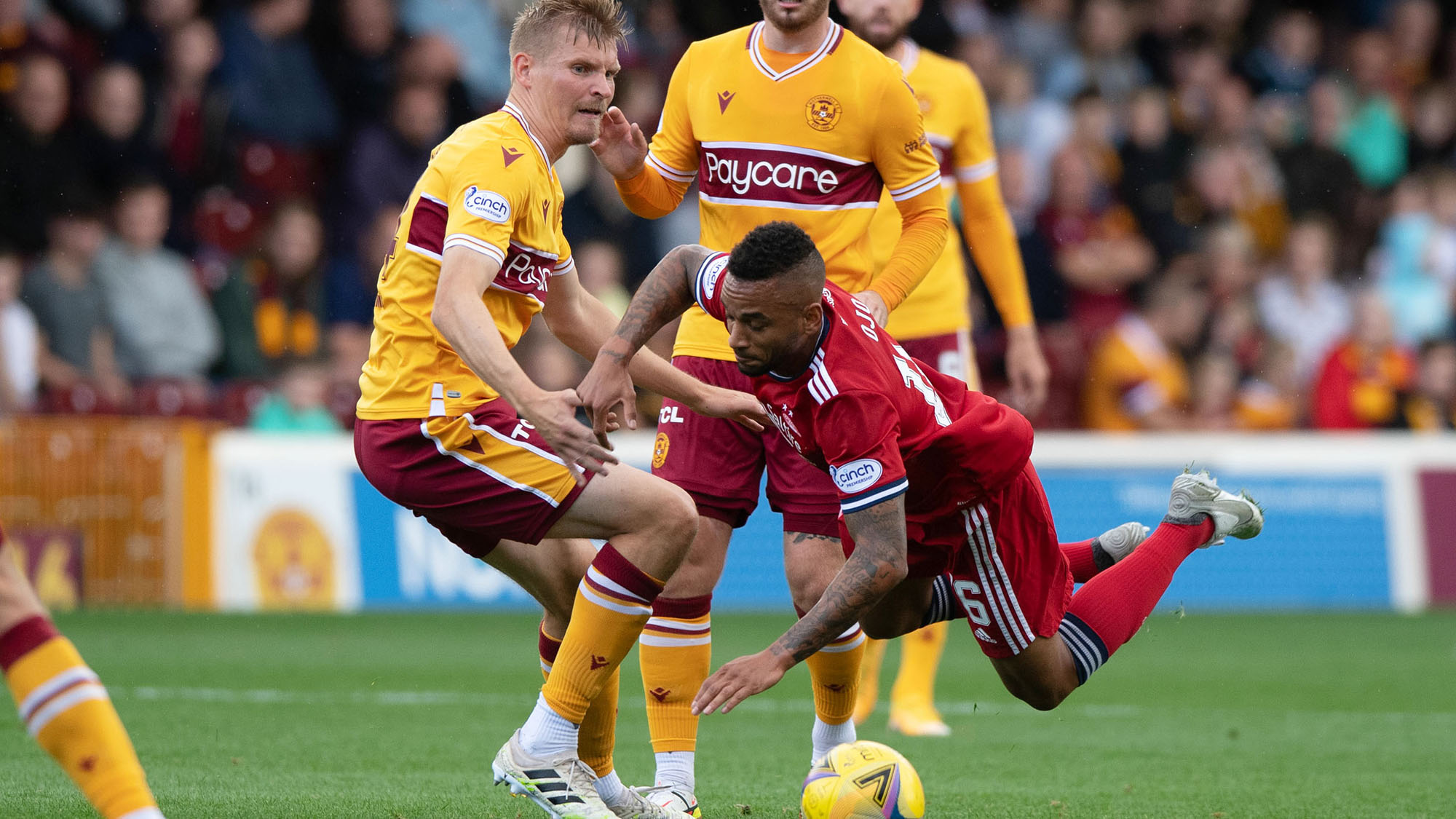 Plenty of possession and a host of half chances ultimately counted for nothing for Aberdeen as they drew a blank in front of goal, two headed goals giving Motherwell all three points at Fir Park.

As football resumed with a trip to Fir Park after the international break, Aberdeen boss Stephen Glass made two changes to the side that drew 1-1 with Ross County at Pittodrie. Dean Campbell dropped to the bench and with Austin Samuels also missing through injury, in came Jack MacKenzie and Marley Watkins. Connor McLennan returned to take a place among the subs and was joined there by new signing David Bates.

Having won their last two games, including a 1-0 win at home to Dundee immediately before the break, Motherwell boss Graham Alexander made three changes to his team with Justin Amaluzor, Ricki Lamie and the suspended Jake Carroll missing out. Replacing them were Sondre Solholm, Nathan McGinley and Kevin van Veen.

Aberdeen settled quickly into a nice passing groove in the Lanarkshire sun, keeping the home side penned into their own half through the opening minutes, but without being able to force any clear opening.

The first real action came on 17 minutes, Scott Brown feeding Funso Ojo. He advanced a few paces towards goal but his rising shot from 25 yards was never a threat.

Five minutes later, MacKenzie fired a great cross through the box that just eluded Ojo coming in at the back post. Aberdeen recycled the ball, Calvin Ramsay’s cross from the right picking out Watkins. His header from eight yards was fumbled by Kelly, but he was able to flop down on the loose ball as Watkins followed through. Then on 23 minutes, MacKenzie became the first player booked, some surprise after the Steelmen had clocked up a host of fouls through the first quarter of the game.

Van Veen marked his goal by chopping down Ramsay seconds later and getting booked, then almost immediately he came off second best in a crunching tackle with Brown, needing treatment before continuing.

New Scotland international Lewis Ferguson showed his strength on 31 minutes, powering into the box before firing off a shot, Kelly palming it onto the roof of the net. Van Veen was lucky to escape a second yellow, jumping in on Ramsay after 33 minutes as Motherwell continued to be very physical right across the park.

Watt made himself a handful on 35, twisting and turning into space before shooting, Brown making an important block. Woolery was then carded for a blatant late hack on MacKenzie.

The Dons were just beginning to find their feet again after the shock of going behind, and Ramsay cut inside to fire off a right footed shot from 20 yards, Kelly clutching the ball above his head with seven minutes to go to the break. Ramsay repeated the trick on 41 minutes, this time a left footer that Kelly spilled, Christian Ramirez flagged offside as he homed in on the rebound.

O’Hara was next in the book, barging into the back of Ferguson as he went up to win a header on 44 minutes.

The visitors were quick out of the blocks after the break and won a corner inside 20 seconds, but Ramsay’s delivery from the left was easily cleared. Ferguson had a pop at goal from a tight angle on 53 minutes, a straightforward save for Kelly.

Kelly had to do a bit more a minute later as Watkins bustled into the box, but he stood firm and stopped Watkins’ attempted chip. It was Watkins again on 55, a fierce drive from the edge of the area that Kelly palmed away.

Ferguson was next into the book, bundling into Watt just inside the Aberdeen half on 58 minutes as Ramsay was down injured at the other end. From the free-kick, with Ramsay off the pitch and getting treatment, Motherwell cleverly worked the ball out wide on their left. Van Veen collected it and played another deep, probing ball into the box, Ojala up to it the strongest, directing his header in off the bar to double the lead.

It could have been worse yet on 61, Lewis doing brilliantly to claw away a Van Veen cross from underneath the bar. Grimshaw was swiftly onto the rebound though, looking certain to score until Ferguson arrived from nowhere to make a critical clearance.

Bates made his Aberdeen debut, replacing the injured Ramsay on 63 minutes, McCrorie going to right-back. Jay Emmanuel-Thomas and McLennan followed him into battle in place of Longstaff and Ojo on 67 minutes. Grimshaw was booked on 73 minutes for a rugby tackle on Emmanuel-Thomas and the hosts then made their first change, Lamie replacing Woolery.

Sixteen minutes from time, a low snapshot from Brown on the edge of the box looked like it might cause trouble but Kelly was right behind it once again.

Van Veen was dicing with danger once more with a couple of lunges at McCrorie that went unpunished, but discretion was the better part of valour for Motherwell boss Graham Alexander who immediately hooked him on 80 minutes, Goss replacing him. Watt did collect a booking seven minutes from time, shoving Brown to the ground after losing out in a tussle with the Dons’ skipper.

Some good play from Emmanuel-Thomas on 86 minutes, a reverse pass inside the right-back, set MacKenzie away into space but his cross was much too close to the goalkeeper.

A McLennan cross was next to raise hopes, Watkins’ acrobatic volley deflected behind as the game entered the final minute, McCrorie collecting a booking moments later for a foul on Watt. Watt then made way for Maguire, Brown then becoming the game’s ninth booking for dissent in the dying seconds.

Motherwell in the end fully deserved the victory.