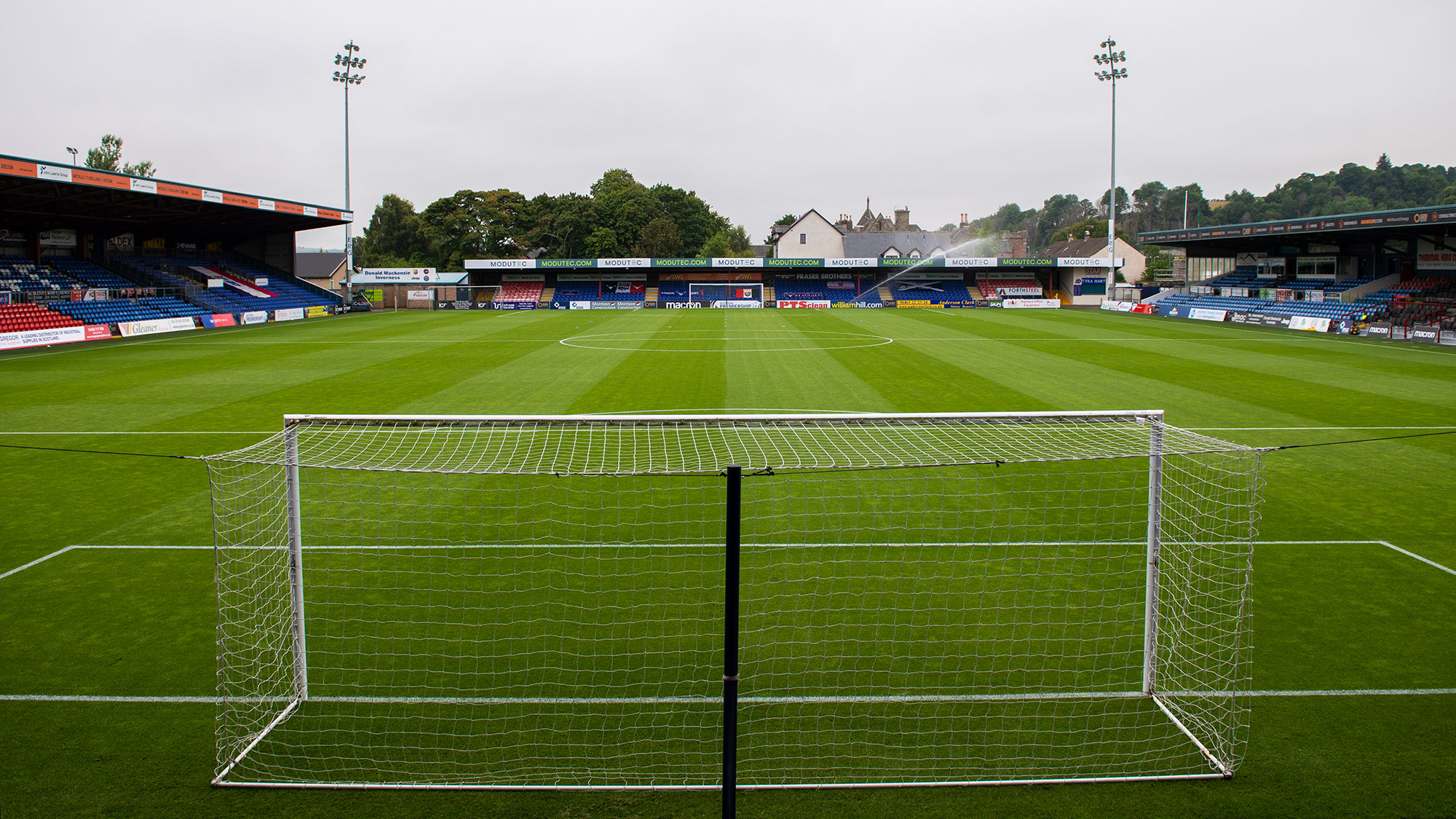 Lewis Ferguson spoke to the media on Friday afternoon as he looks ahead to Sunday’s trip to Dingwall. Read more quotes from Lewis by clicking here. 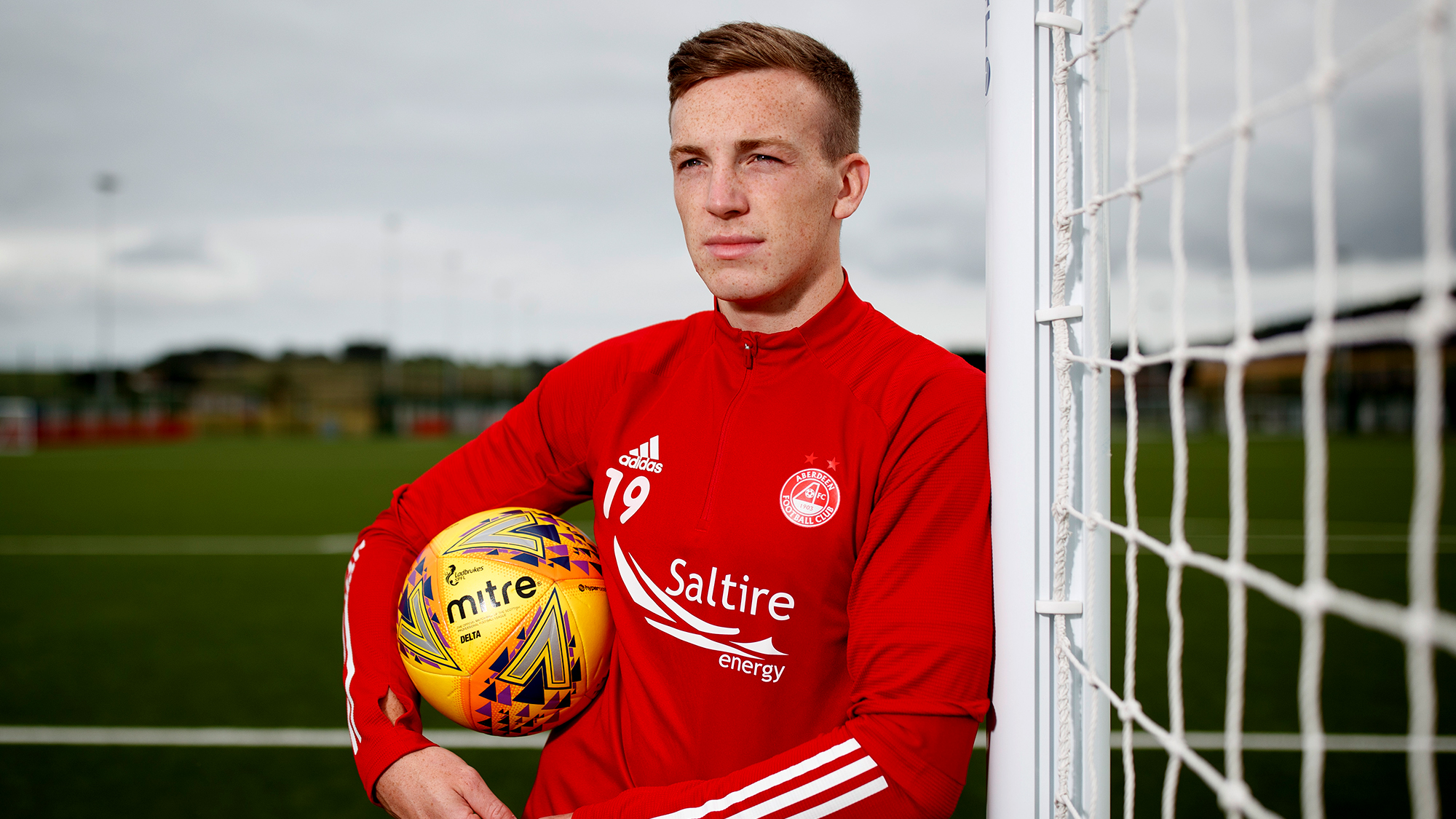 “We are disappointed not to come away with anything. We gave a good account of ourselves, we worked our socks off, we defended well, and I thought we caused a good team a few problems. There is a lot of positives we can take from it, playing a side like that and containing them for large periods of the game. It just wasn’t to be.

“Sporting have players who can hurt you with one pass, you saw that for the goal, they punished us. You have to be switched on for the full 90 minutes. They have got players in the forward areas who can hurt you, as you saw from the goal. We lost the ball 10/15 yards from our own box and they have one pass and they are in on goal. You had to be switched on for the full 90 minutes, constantly on the move and always looking over your shoulder.

“It is difficult when you get to this stage of Europe, you are going to come up against a quality side and it is always going to be a tough ask. Sporting probably want to go on and win this tournament and they are probably capable of doing so. 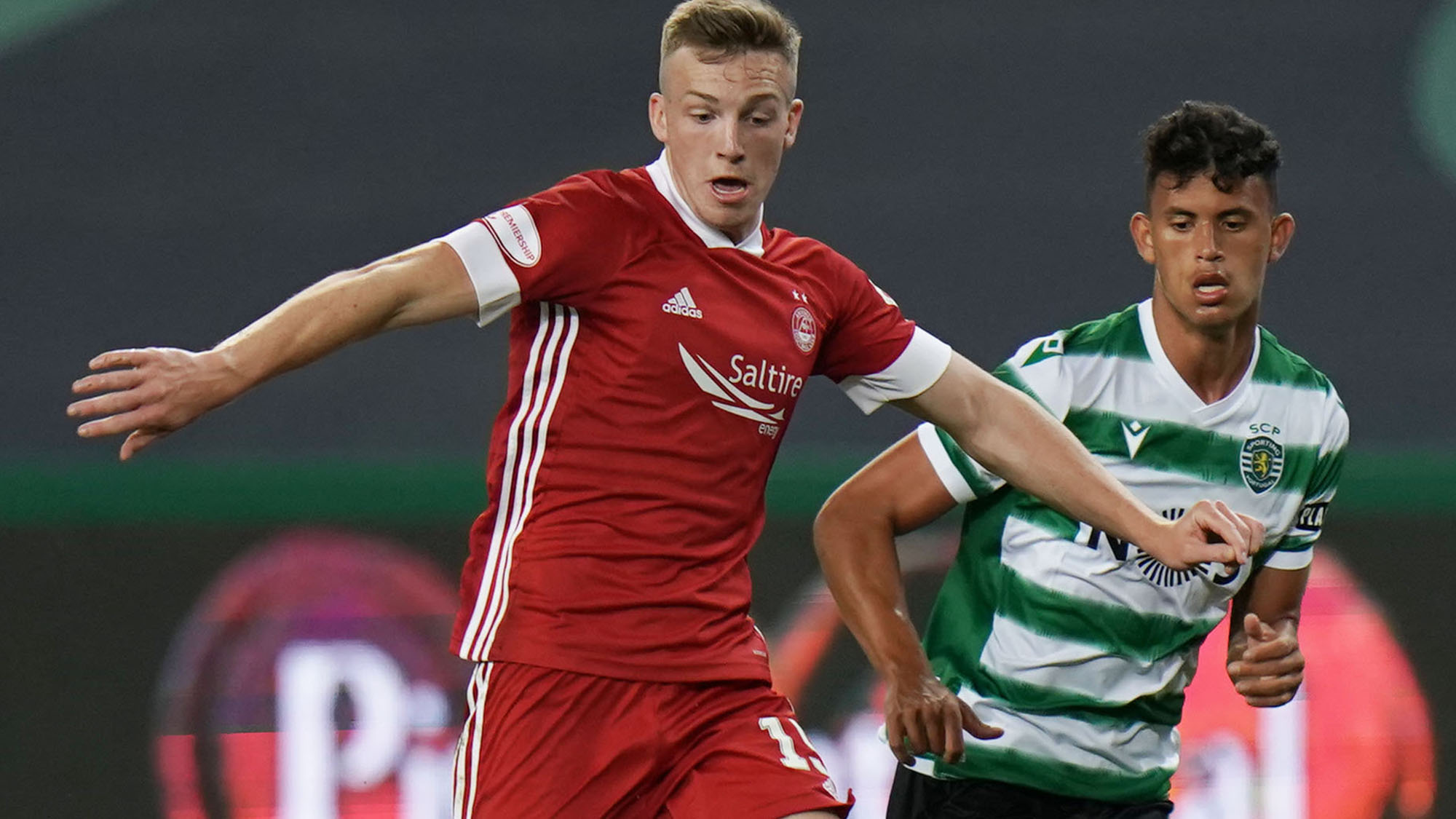 “I am delighted for Scott, he deserves his move down south, he has been different class for Aberdeen. It was difficult losing him before the Motherwell game, we prepared for the game with him in the squad and it was tough to lose him so close to kick off.

“We have got players in the squad that are capable of going in at the back and putting in a performance.

“We were not at the races last week; it just wasn’t a performance that was like us. We shipped three goals in 20 minutes which isn’t like us. We were caught cold; we weren’t at the races and we are looking to put things right this Sunday. 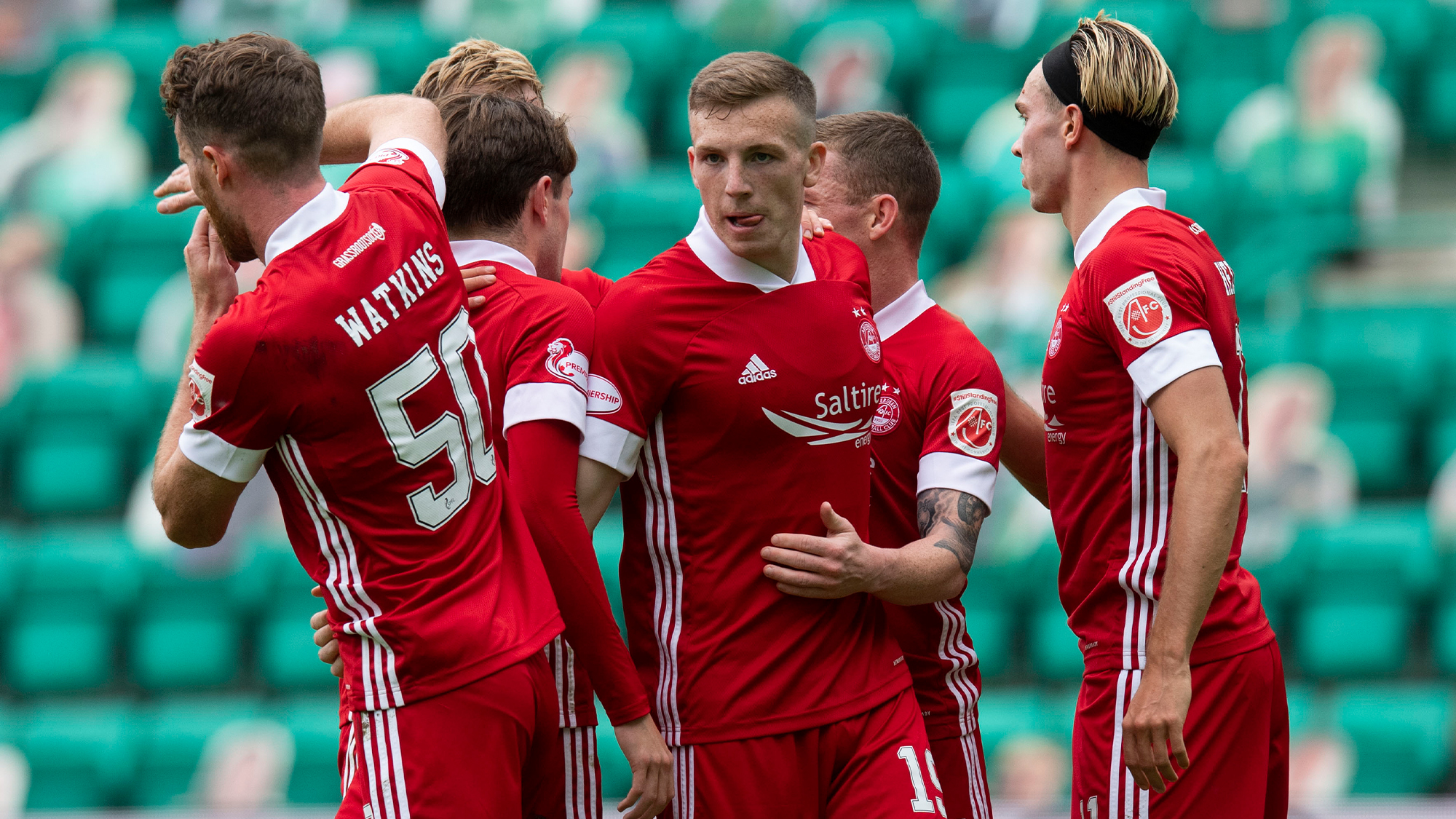 “Playing in a stadium like Sporting CP’s against a top team is what you want to do, to get back to that we need to win games in the league and in the cup competitions. The only way we can get back to that is going to Ross County and getting three points, and then winning the following week and keep picking up the points. It is as simple as that. We need to win games and aim to be as high in the table as possible. We want to experience games like that again and to go on and win them.

“We expect a tough game. It is never easy in this league. We have got a decent squad that apart from the Motherwell game had been scoring goals and defending well. We want to get back to that winning way and get that winning feeling and also hopefully keeping a clean sheet.

“We always take it one game at a time. The most important thing is getting three points on Sunday.

“Every team has players who can hurt you. I am sure the manager and staff will have looked at Ross County and we will do some analysis on them. We have played them before, and we know their strengths.  When we do get the ball, we want to go forward and score goals.” 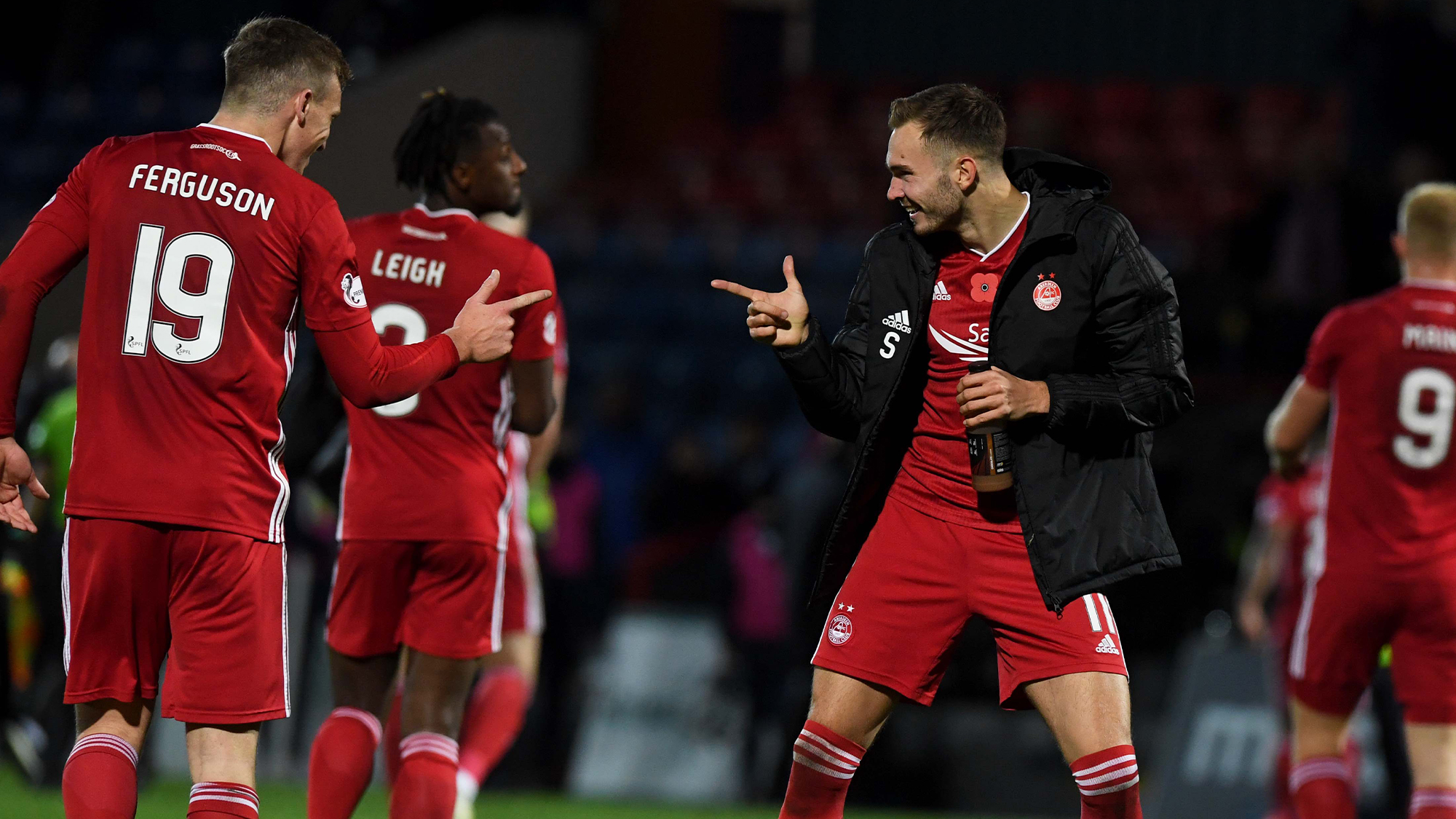 We last travelled to Dingwall back in November last year when The Dons ran out 3-1 winners. County took an early lead through a Josh Mullin penalty but Aberdeen drew level soon after through a superb Niall McGinn free kick. Second half goals from Ryan Hedges and Andy Considine sealed the win for Aberdeen.

Report | Dons back to winning ways with victory in the highlands 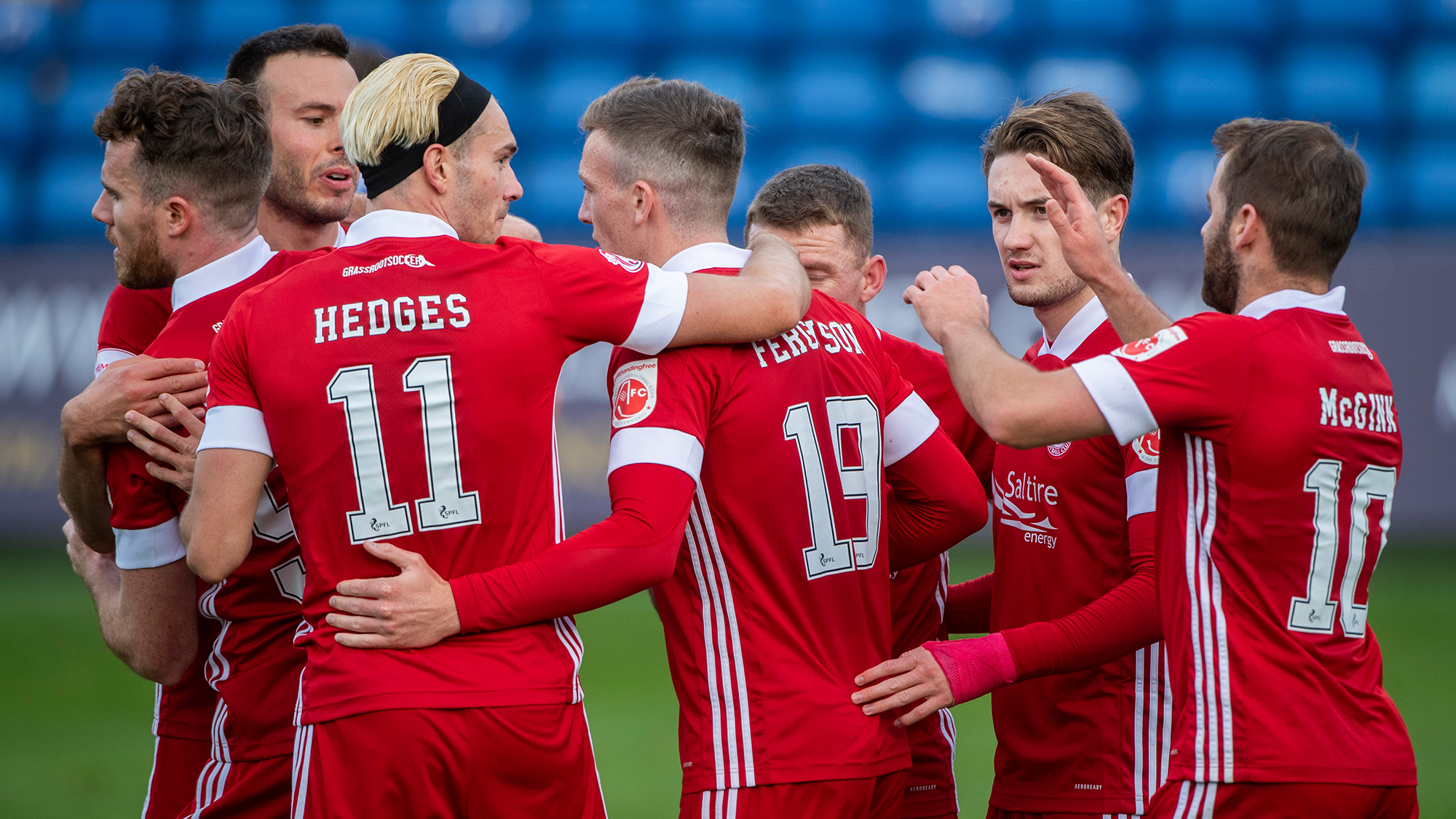 A high tempo display from Aberdeen saw then being simply too hot to handle for Ross County, the Dons scoring three goals and taking three points on their travels to close the gap on Hibs in third place.

Following the narrow defeat in Lisbon on Thursday night, Derek McInnes made two changes to his starting XI for the game in Dingwall. Scott Wright and Niall McGinn both returned to the line up with Shay Logan and Dylan McGeouch trading places with them on the bench. Bruce Anderson and Jack MacKenzie were added to the bench to make the full complement of nine.

Ross County sat a point behind the Dons before kick-off, having played two games more. They won 1-0 at St Johnstone last Saturday and Stuart Kettlewell made just the one change, Keith Watson coming in for the injured Connor Randall.

The Dons made an electric start and should have been one up after 40 seconds. Slick play set Jonny Hayes away down the left and at the second attempt, his cross reached the back post where Niall McGinn got under his shot and put it over the bar from eight yards out.

Within a minute, McGinn almost atoned for his miss, dashing into the inside-left position and then squaring the ball for Scott Wright around the penalty spot, his first time shot flying past Laidlaw but bouncing away to safety off the post.

Marley Watkins wasn’t so far away in the sixth minute either, Wright, Hayes and McGinn combining down the left, the ball spinning away from Watkins, Laidlaw able to grab the ball just in front of him. Next it was Ross McCrorie, a ferocious drive from 25 yards in the seventh minute acrobatically tipped over by the goalkeeper. The same player had a snapshot beaten away at the near post following a corner two minutes later.

Having somehow weathered the storm, County gradually began to get back into it, Paton firing off a shot at goal that was well blocked on the quarter hour. Good defending by Ash Taylor helped clear Aberdeen’s lines three minutes later as the Staggies tried to hit on the break.

The Dons regrouped and started to pen County in again, but clear chances were fewer and further between than in the opening minutes when they had found it so easy to slice the hosts open. Even so, in the 31st minute, the Dons hit the post again, McGinn scooping the ball across the face of goal from the edge of the box, Laidlaw offering up a silent prayer that was answered as the ball smacked against the woodwork and away to safety.

A minute later, a Ferguson drive from distance forced Laidlaw to get down sharply to save as Aberdeen maintained their dominance. Symptomatic of the home side’s desperation, Vigurs was in the book in the 39th minute, hacking down McCrorie on the run.

Had we been playing according to Queensberry, rather than FIFA rules, referee Collum would have long since called a halt to proceedings to spare County any further punishment.

Sadly, football demands a knock-out punch and finally, in the 42nd minute, Aberdeen had County on the canvas, Watkins up at the back post to meet Hayes’ hoisted cross from the left, nodding the ball back across the face of goal and just inside the far post. It was a well deserved first Aberdeen goal for the on loan striker and a timely goal for the Dons as we headed into the break.

Kettlewell sent County out early for the second half, Charles-Cook introduced at the break, Tillson making way for him.

It was a rather more sedate start to the second half than the first, certainly in front of goal, but Aberdeen were still putting some good passing moves together and looking to maintain the tempo. A Hedges shot in the 56th minute took a deflection and bobbled wide of goal as it was again the Dons who threatened most.

The nature of that threat meant that County were down to ten men on the hour, a rapid Aberdeen counter-attack down the left by Watkins allowing him to slot McCrorie in. Vigurs bundled him over and collected a straight red card as he conceded the penalty. Ferguson stepped up to roll the ball past Laidlaw to double the lead.

Shaw was immediately replaced by Kelly. Aberdeen making their first change – McGeouch on for McGinn – in the 72nd minute. Kelly went into the book two minutes later for pulling Wright back.

There was another penalty for the Dons in the 75th minute, Hayes again hanging the ball up into the box, Reid penalised for handling as he challenged for the cross with Hoban and Watkins. Laidlaw went the right way for Ferguson’s low kick away to his right, but despite getting a glove on it, there was too much power on the shot for him to keep the ball out.

McCrorie tried his luck from 20 yards out with ten minutes to go, his shot deflected over the bar – and out of the ground. Laidlaw collected comfortably from the corner. Ronnie Hernández, Connor McLennan and Ryan Edmondson replaced Hoban, Wright and Watkins as the game edged towards its close, Gardyne coming off for McKay in a mass change at the same time.

Edmondson was almost in straight away, a nicely cushioned first time pass from Hernández picking him out from Hayes’ cross, the ball whipped off his toe by a defender before he could shoot.

The Staggies won a free-kick right on the edge of the Aberdeen box in the 87th minute, Kelly’s effort clipping the top of the wall on its way over the bar, the resulting corner coming to nothing.

Hedges then made way for Bruce Anderson in Aberdeen’s final change but the Dons weren’t finished yet, Hernández getting onto a loose ball in the box, forcing Laidlaw into a sharp save, low down at the near post. It counted for nothing from County’s point of view though, the Dons collecting three well deserved points.