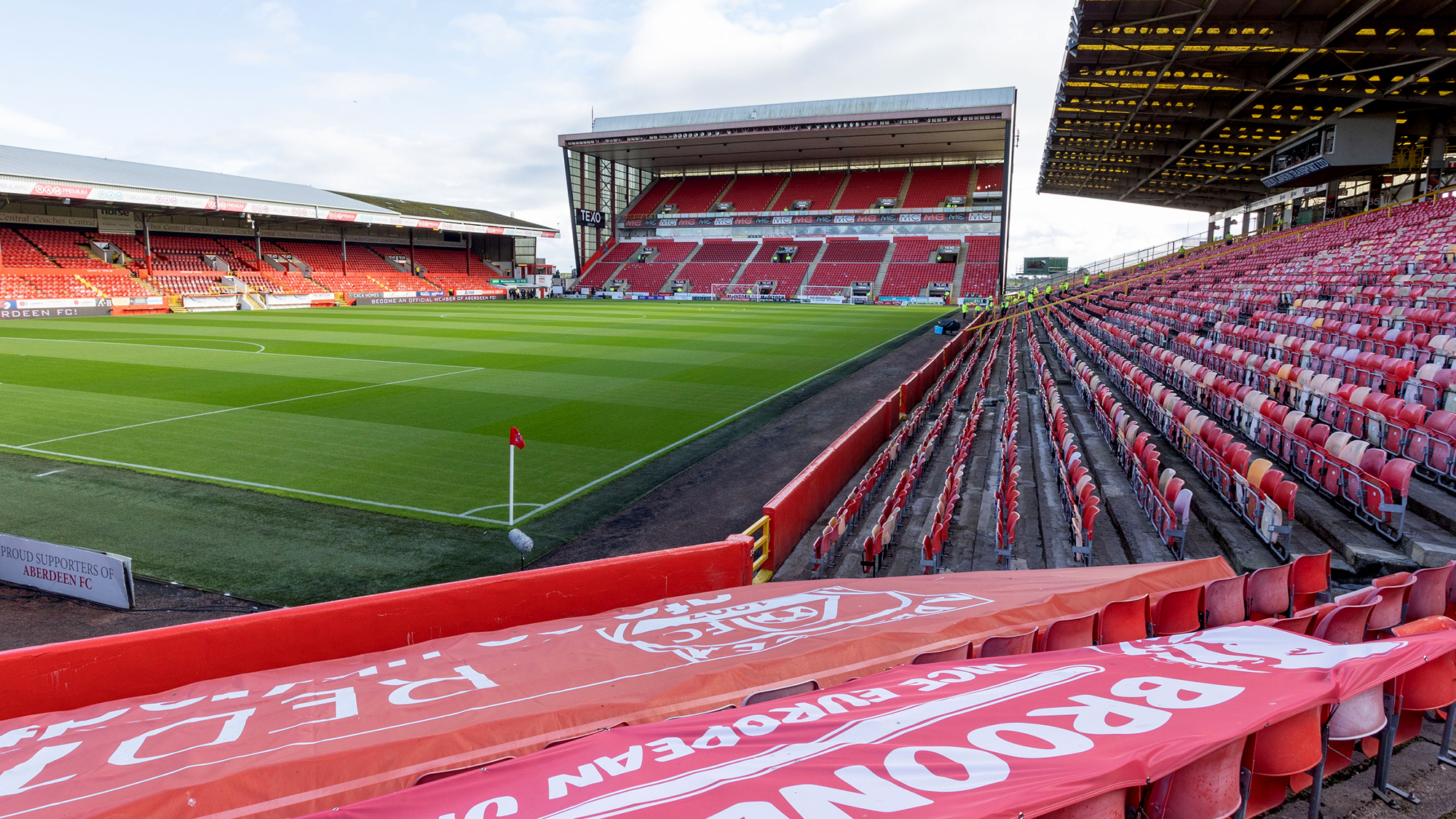 The manager spoke to the media on Wednesday lunchtime to preview Saturday’s game with Hibernian.

To watch in full on RedTV, please click here. 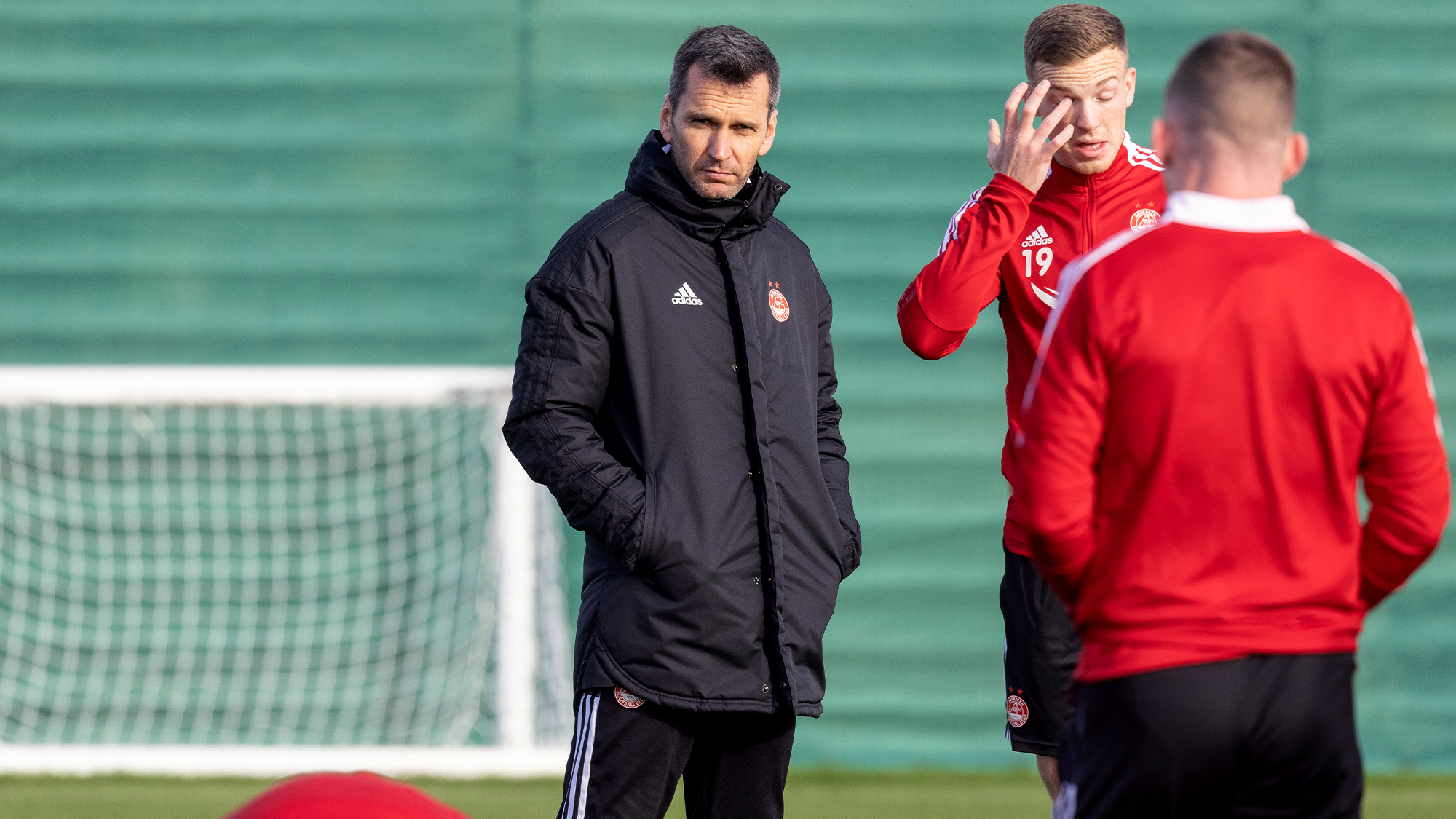 “In terms of the outside noise it is not something I pay a lot of attention to. I can’t speak for the players. For myself I come in, I focus on the work and I focus on the game coming up which is Hibs on Saturday. That has been the focus on the training park.

“It is one of the most difficult spells of my career that I have had to negotiate because of the amount of scrutiny that comes with the job and with the run of results that we have been on. When you are a player, you take your turn speaking to the media, I have to come and do it before and after every game and it is what is expected. I am used to it. It is part of the job, it is part of the challenge and it is part of keeping everything calm and balanced which I think is important for any manager but especially in the situation we find ourselves in.

“The supporters of our club saw how passionate our Chairman is about the situation at the club and the belief he has got in the people who are in here, including the group of players which is important too. It was important but the be-all and end-all is what happens on a football pitch and I am fully aware what happens if that doesn’t happen. There are people who want to push that agenda a little bit quicker, they would rather that we didn’t get the results so they can be proved right. It is my job and the players and the staff to prove right to the people who put us in this position.

“The supports was brilliant (from the Chairman) and it was appreciated but to be honest it does not change our focus on preparing for games. Regardless of what happens, we come in, we focus on the next game and that is the way that we work. That will continue to be the case and the team have shown we should be getting more points than we have been, there is no doubt about that whatsoever. They continue to believe in that and the people who put us here believe in that. 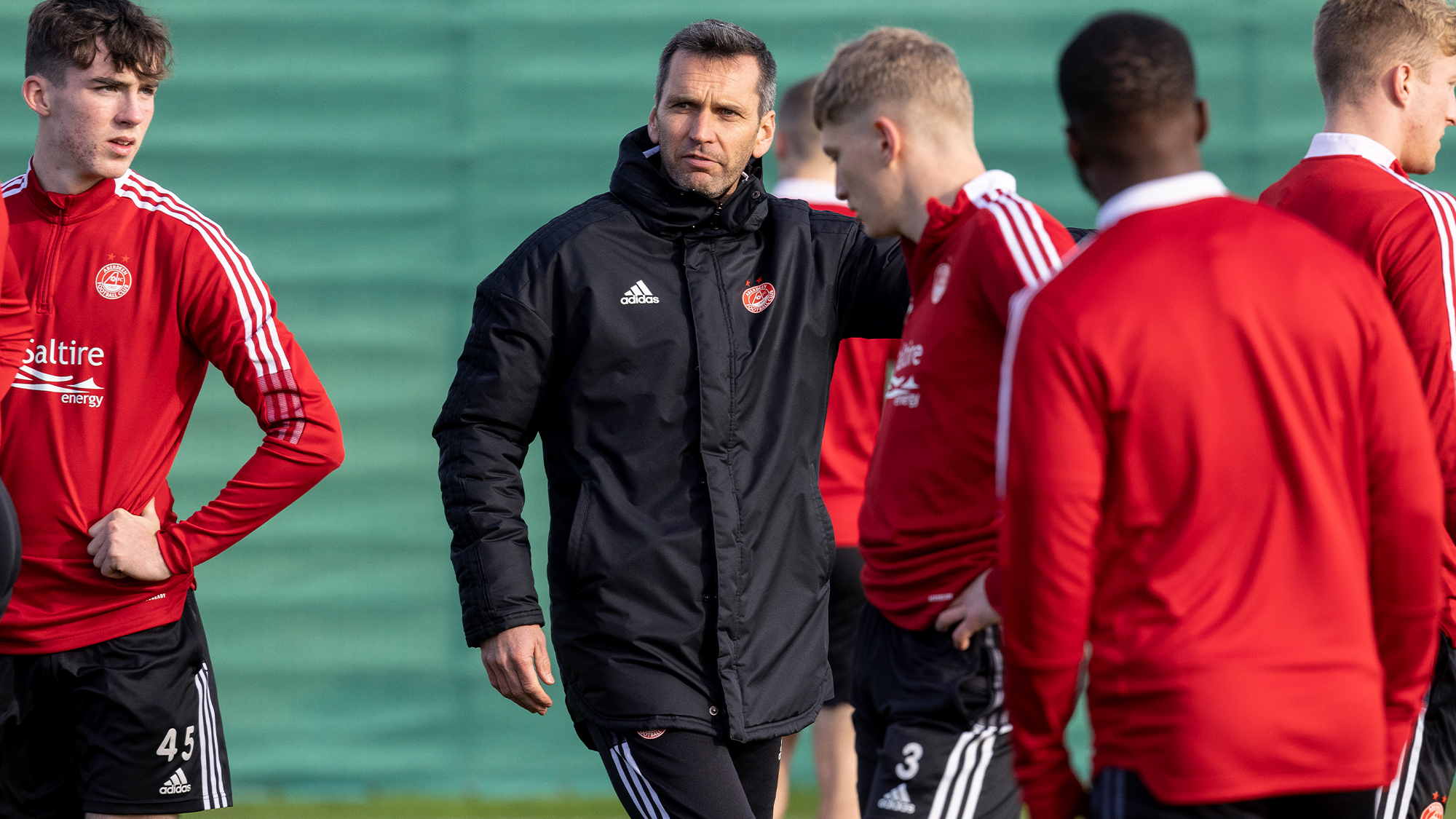 “The players are doing everything that they can in their power. Every game that we have lost has been down to individual mistakes and it has been spread around the team. If the team keeps playing the way that we have been, carrying a threat, we have not been cut open by teams, I think we will start to win football matches.

“I have to speak to the media every week, and it sounds like you are making excuses every week but there are zero excuses coming out of here. I am looking forward to rectifying it as quick as we can.

“The outside perception is there is a huge crisis here, the reality is we have not got the results that we should have been getting through individuals making little bits and pieces of mistakes. It is pretty simple. They key thing is to keep focusing on how you work. We have meetings weekly, we have had two this week on how we are going to work and how we will aim to try and beat Hibs, we have done that since pre-season. Meetings with players and meetings with staff are nothing new.

“We are not out there saying we are Manchester City and we will pass teams to death, there is that misconception. Anyone who has come to our games with an objective mind can see that we are a football team that should have won a few of the last five games. If we don’t then the outside perception can say what they like because the results back them up and they can believe that they are being proved right.

“The fact that they had a disappointing result last week means that they will be determined to bounce back. They will be determined. There has been a lot of rivalry between the clubs over the past few years. There has been a lot of proximity in the division, Hibs have got a little bit of breathing space at the minute and they will be hoping that we don’t close that. We are focused on ourselves and negating their strengths and attacking their weaknesses, like we do every week and like they will be trying to do to that to us.

“We are pretty strong. Anybody who was out, that wasn’t a long term injury, should be back and available.” 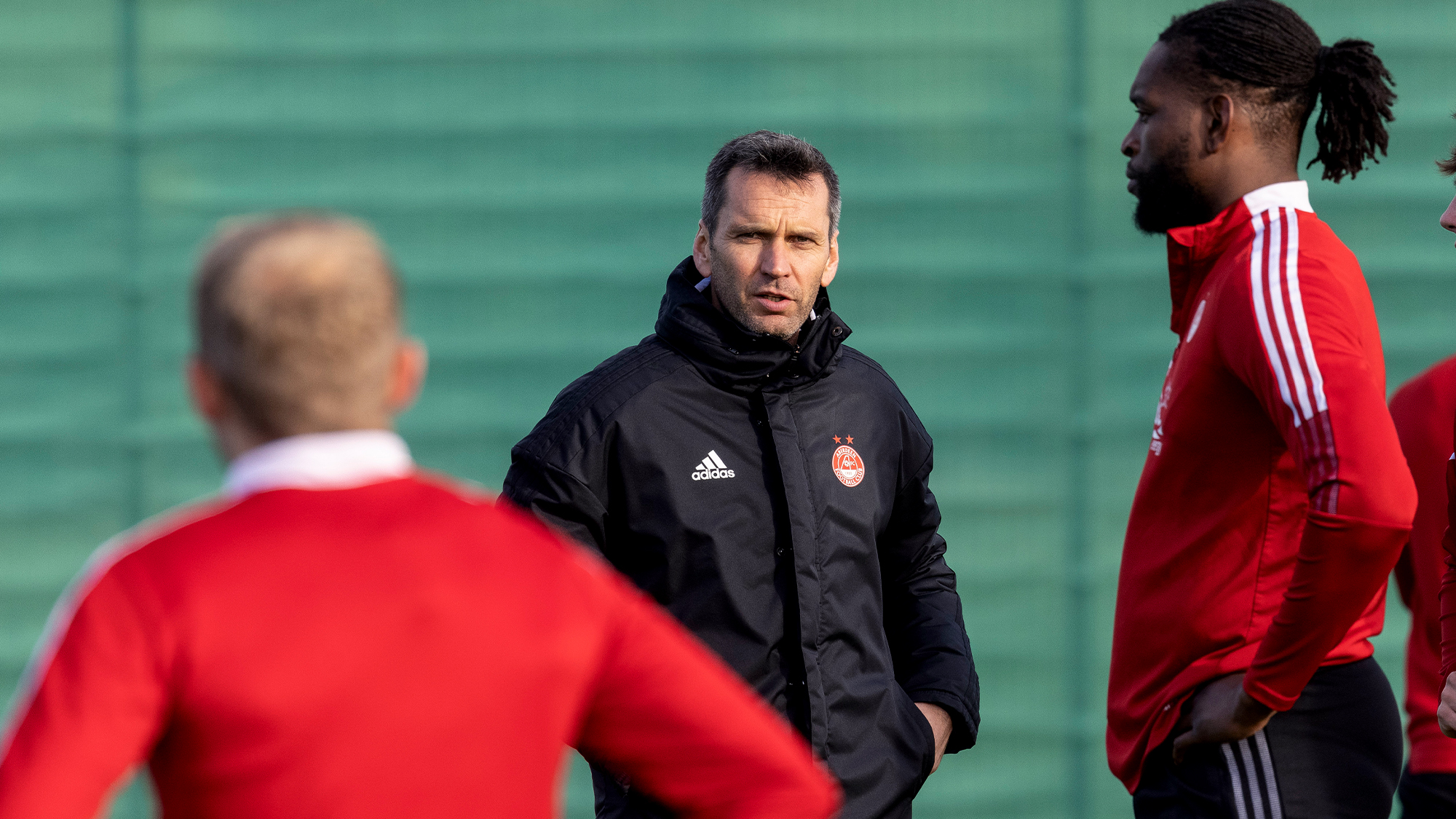 The latest edition of Red Matchday will be available to purchase around the ground ahead of kick off, or you can purchase your copy online here.

The Dons went into their second match of the season against Hibs on the back of two wins in seven days against Dundee and St Johnstone. Gary Mackay-Steven and Andy Considine came into the starting XI for Greg Stewart and Kari Arnason. GMS had made the difference between the two sides in the earlier league meeting back in October and he was to play a staring role once again as he grabbed a hat-trick with Graeme Shinnie scoring the other for the home side. Anthony Stokes scored a late consolation for the away side but it was an afternoon to remember for Aberdeen as we ran out 4-1 winners and made it three consecutive wins on the bounce.

After the game, Mackay-Steven gave his reaction to RedTV: “It was very pleasing personally, but I felt it was a great day’s work all round today. We were good from the start. Hibs are a good team, we knew that. We will probably be fighting with them for second place throughout the campaign so we really wanted to show what we were all about today and I thought we did that.” 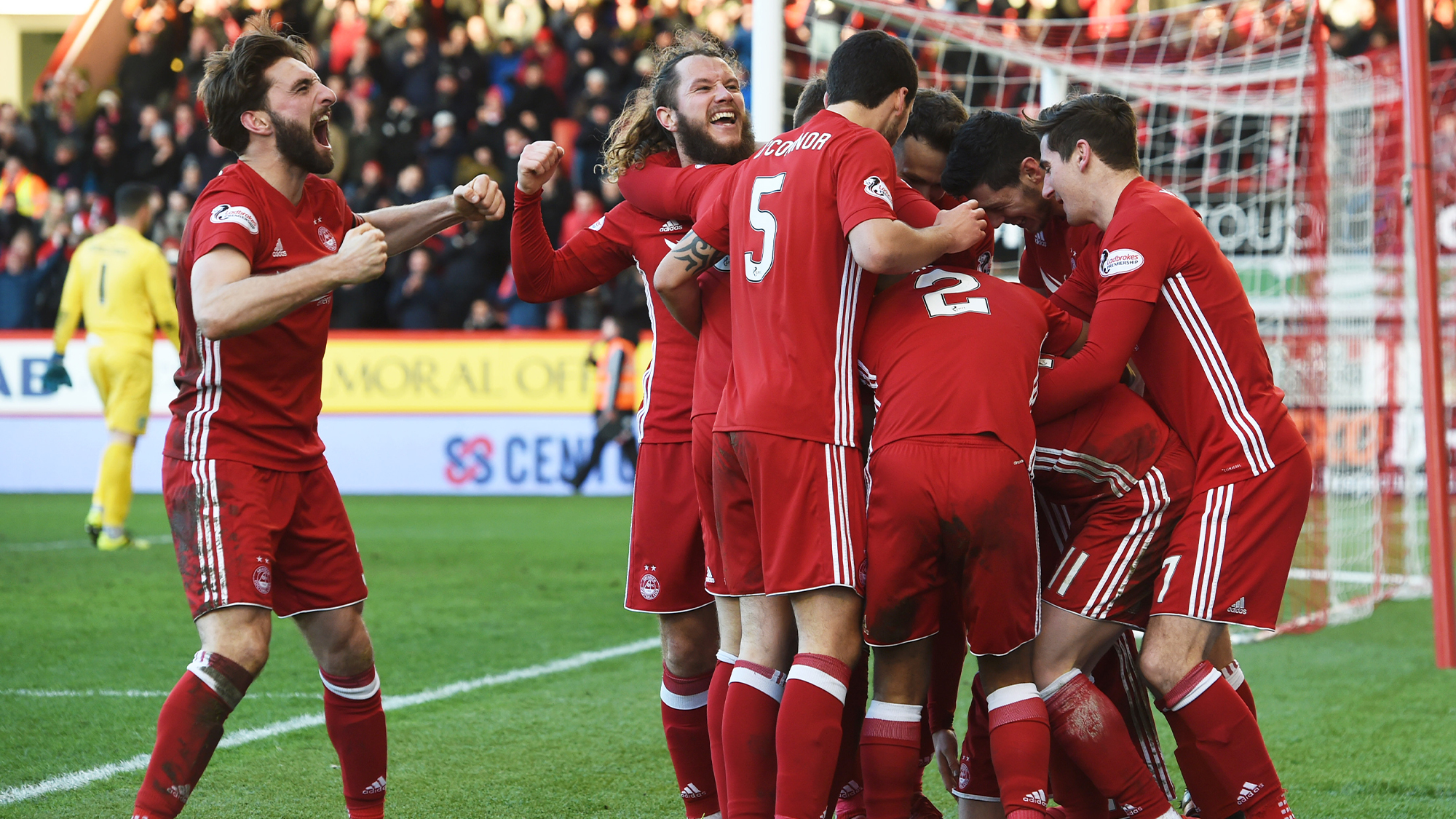 Look back at five goals for The Dons against Saturday’s opponents at Pittodrie. 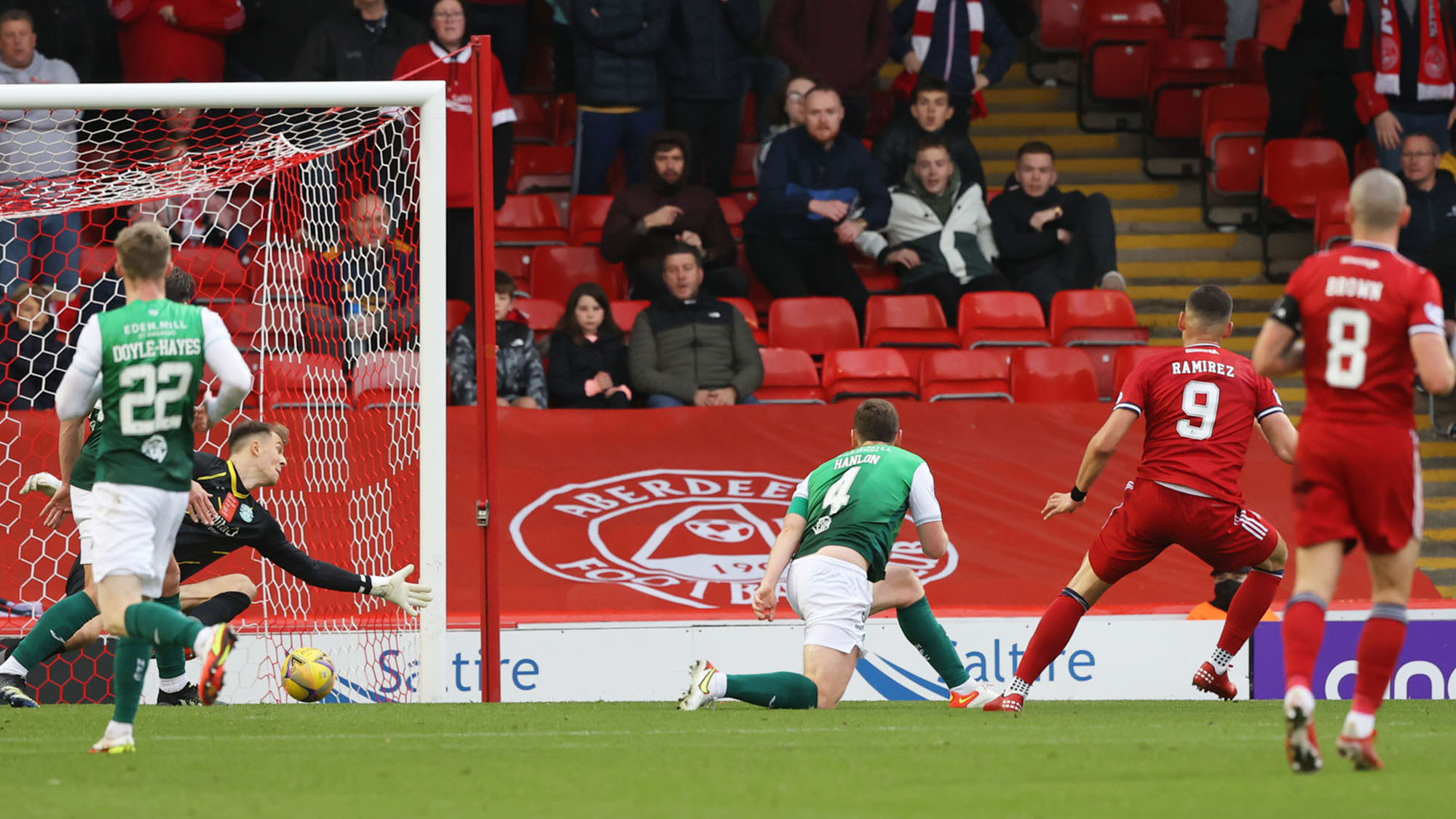 Guts, determination and a little bit of quality when it was needed most got the Dons back to winning ways on such an important afternoon against Hibs at Pittodrie.

Stephen Glass made three changes to the side beaten at Dens Park last week. Joe Lewis returned from illness to take his place in goal, fit again Ross McCrorie was back in the side and Marley Watkins stepped up from the bench to start. Gary Woods and Jonny Hayes were among the subs with Jack MacKenzie missing out through injury.

After Hibs lost 3-0 at home to Dundee United, Jack Ross made four changes to his side with Darren McGregor, Paul McGinn, Lewis Stevenson and James Gullan coming into the starting XI, Nathan Wood, Josh Doig, Scott Allan and Jamie Murphy all on the bench.

After a minute’s applause in memory of George Kinnell, it was the visitors who were quickest into their stride, pushing the Dons into defence in their new 3-5-2 shape. It was Aberdeen who first threatened a goal though, Macey at full stretch to palm away a fierce 30 yarder from Ryan Hedges.

A beautifully crafted goal gave the Dons the lead they deserved on 27 minutes. Scott Brown won the ball in the middle of the park and delivered a raking pass to get Ramsay on the run down the right. His cross was as precise as you’d expect and Ramirez came running onto the ball to guide a crisp volley just inside the near post, a sharp finish from the American.

A couple of minutes later it was Ramirez again, twisting to manufacture a back header from Ojo’s cross that drifted wide. There was bad news for the Dons to follow though, Ramsay down and needing to be replaced on the half hour, possibly straining a muscle in setting up the goal. He was replaced by Hayes, Ojo heading over to the right wing-back role.

McGregor collected the game’s first card after totalling Watkins on halfway after 33 minutes as Aberdeen remained on top. Hibs were still a danger though, Boyle beating the offside trap, McCrorie coming across to get a crucial deflection on his shot that took the ball inches wide.

Five minutes from the break, Gallagher came across to make a routine clearance but he picked up an injury in doing it, stretching and clutching his left thigh as he fell. He needed to be replaced, Matty Longstaff coming on in his stead, Brown dropping into the back three.

Watkins wasn’t far from a goal two minutes from the break, exchanging passes with Ramirez across the top of the area before flashing a shot across the face of goal and just wide with Macey rooted. Moments later, he clashed with McGregor and he also needed treatment before, thankfully, he was able to carry on. There was still time for Longstaff to collect a booking for a high boot on McGinn.

McCrorie picked up a yellow card on the hour for an innocuous looking foul, whereupon Allan was the next sub to be introduced by the visitors, replacing Gullan. Brown was then carded for a late challenge on Nisbet.

Murphy opened the Dons up down the Hibs left on 67 minutes before arrowing a cross through the six yard box, McCrorie doing enough to ensure that Nisbet couldn’t get the finishing touch, the closest Hibs had come to a goal.

Lewis made a brave save down low when a Hibs cross caused chaos on 68 minutes, but it came at the expense of taking a whack in the face from McCrorie as he came back to cover. Prolonged treatment followed before Lewis got back to his feet and was able to continue.

After an exhausting shift, Watkins made way for McGinn with 13 minutes to go. Boyle was booked a couple of minutes later for bringing Hayes down, symptomatic of a scrappy second half. Wright was the introduced by Hibs with seven minutes left, Doyle-Hayes replaced as the visitors tried to find a way through a determined Aberdeen rearguard.

McCrorie was next to require treatment after heading the back of McGinn’s head, as the injury time continued to mount. Again, he eventually shrugged it off and carried on.

Aberdeen almost sealed it on 89, Hedges’ free-kick helped on by Brown, Macey just able to get to the ball a fraction before David Bates. Another dangerous cross flashed through the Aberdeen box, Lewis clattered again as he came out to cover, the game then embarking on seven minutes added time.

Newell hauled Hayes down and then indulged in a bit of afters, both getting booked in the traditional manner, despite Hayes doing nothing wrong. In the final minute, McGregor appeared to lash out at Bates as he was awaiting a cross coming into the box and collected a second yellow followed by a red card. It was evidence of Hibs’ frustration as the Dons were able to keep them at arm’s length during seven minutes of added time and seal the win that was so desperately needed.