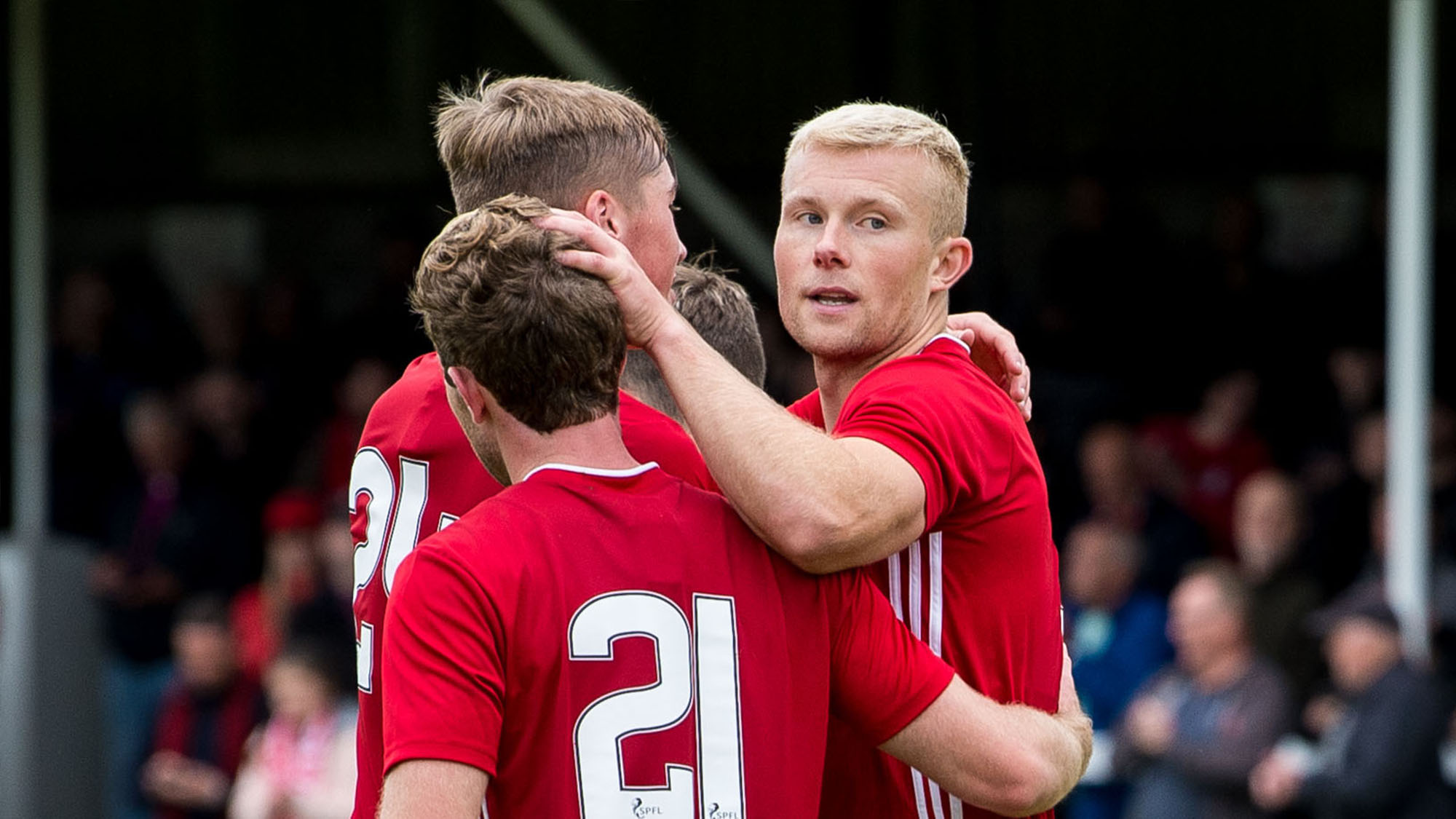 Connor McLennan and Niall McGinn were involved in the squad this afternoon, their first involvement of the pre-season campaign.

Craig Bryson took part in the warmup whilst Sam Cosgrove and Ryan Hedges were not involved today as a precautionary measure but both should be fine for Thursday.

Youngsters Calvin Ramsay and Michael Ruth both came into the squad for the first time. 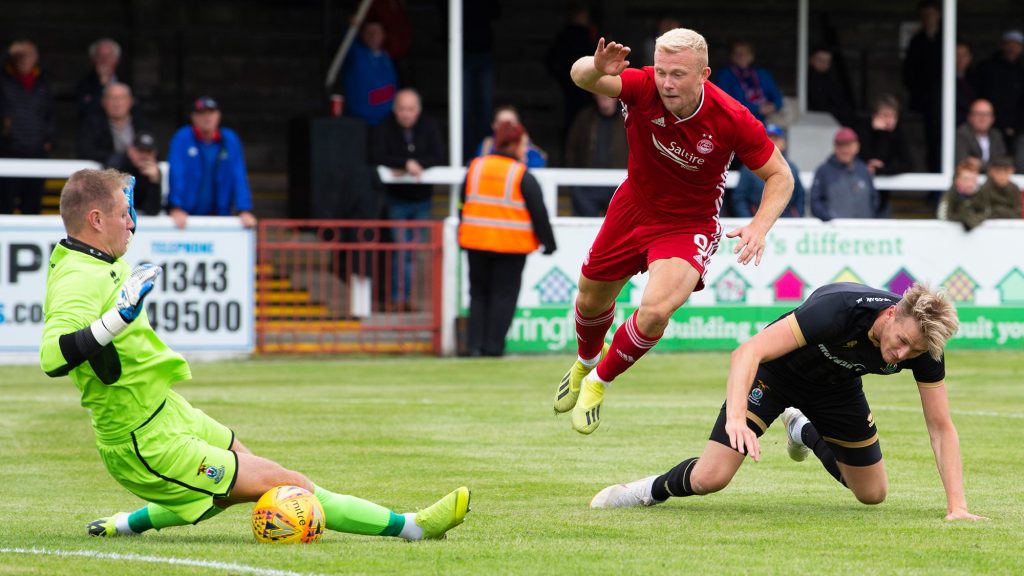 In the opening minutes some good play from Inverness, some quick passes allowed right back Shaun Rooney to find space for a cross but the ball sailed over the bar. Rooney was then injured and had to be replaced after four minutes by Col Donaldson.

Donaldson with his first touch, produced a really slack back pass which gave the ball straight to Scott Wright. Scott ran in on goal, unselfishly squared the ball to Curtis Main but the pass was slightly behind the striker and when he tried to lift the ball over the keeper he did not get quite enough on his shot.

On 12 minutes Jon Gallagher attacked the full back down the left and put over a good floated cross looking for Main, but Jamie McCart did well to read the danger and head clear.

Quarter of an hour in, fine play down the left involving Main, Leigh and Gallagher – they combined well to lay the ball into the path of Dean Campbell but his shot was just too high.

On 19 minutes a strong burst forward by McLennan who produced an equally good through ball for Main. The striker took a good touch and managed to get a shot away, but keeper Cameron Mackay made a decent save from close range. It was brave keeping as well.

Two minutes later Greg Leigh took what looked to be an ankle knock. He has to go off but hopefully it was nothing too serious. In a straight swap Greg was replaced by Andrew Considine who went to left back. 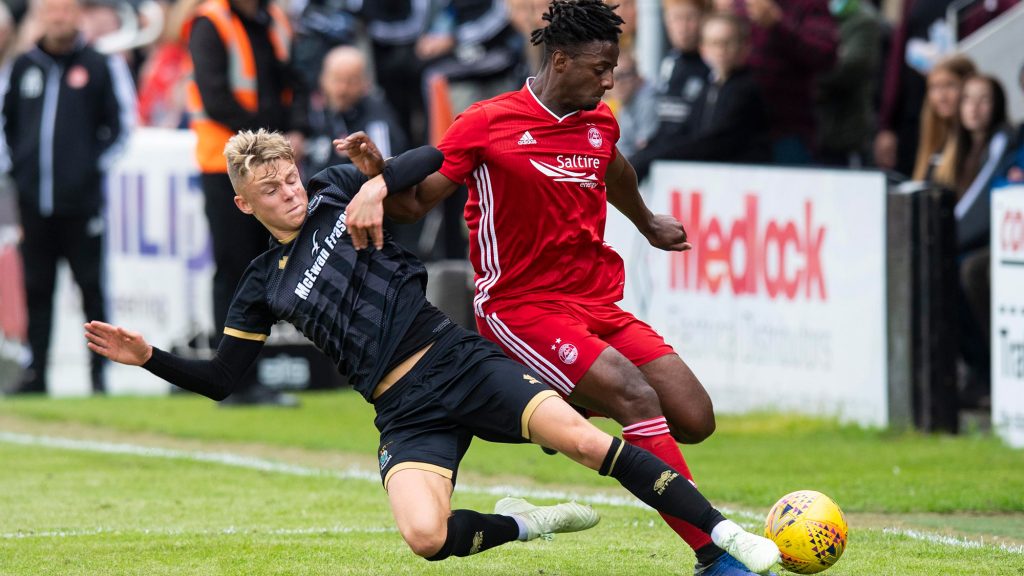 After 25 minutes Main produced some lovely hold up play. After chesting the ball down he sprayed it wide to Connor McLennan who was able to run in on goal. Connor cut onto his left but scuffed his shot slightly and it went into the side netting. Shortly after that Aberdeen won the first corner of the game which was comfortably cleared.

Two minutes later Arron Doran beat Mikey Devlin to the ball and showed good pace to get behind the defence. Joe Lewis came all the way to the edge of the area to try and retrieve the situation, which ultimately worked because Doran lifted the ball over the keeper but put it harmlessly wide. The talented ICT man went off injured a short time later to be replaced by Tom Walsh.

After half an hour McLennan was replaced by Niall McGinn. Inverness then won the first corner but Joe Lewis made an easy catch.

The changes did not help the flow of the game, neither did the sticky pitch which prevented the Dons moving the ball forward at pace. Five minutes before half time Dean Campbell won the ball deep in enemy territory after Trafford gave away possession. Dean played it to Gallagher and from the edge of the area his shot went over, but it was not far away. Jon looks equally comfortable on either foot. Again he impressed this afternoon. 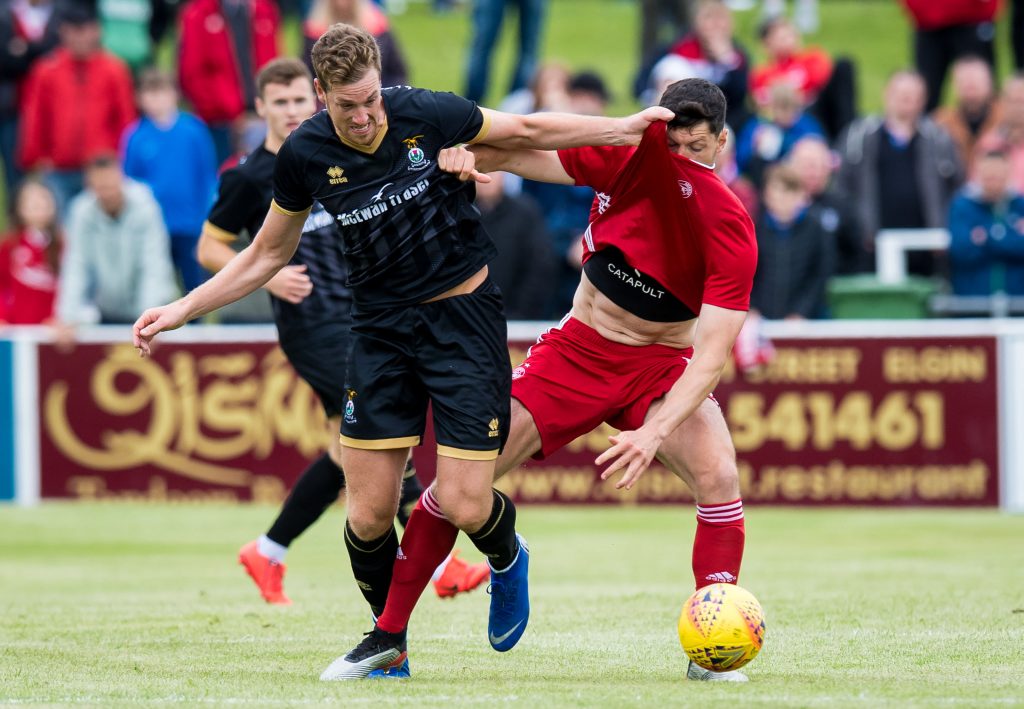 At the start of the second half there was a good move involving Campbell and McGinn. There was then an inventive cross from Niall but there werr not any red shirts in the six yard box.

It was clear Aberdeen were trying to lift the pace of the game. On 51 minutes Wright produced a good ball forward to release Gallacher down the left. Although his cross was cut out the Atlanta man showed an impressive burst of pace.

This was a better spell from Aberdeen.

They forced their third corner from which they almost scored as McGinn’s delivery caught out the defence and ball went right across the box. A minute later McGinn went close when he fired a shot inches over the bat after he had collected a Shay Logan throw-in.

On the hour mark Gallacher’s quick feet won the Dons a free kick right on the edge of the area. McGinn took it and found McKenna at the back-post area, Scott knocked the ball back across goal for Considine and his header landed on the roof of the net.

The Dons were getting closer and a minute later they did in fact take the lead. 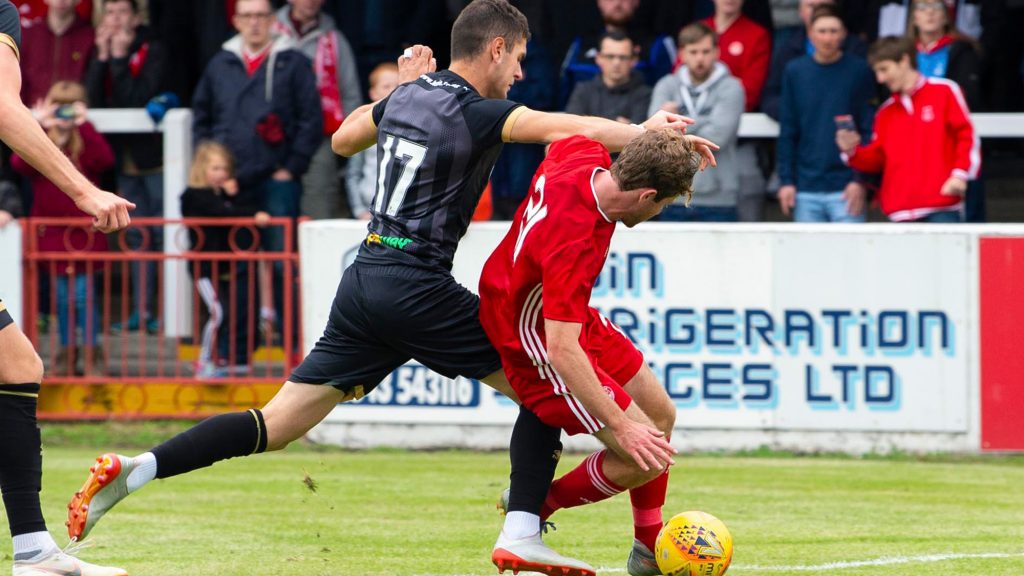 Again it was the pace of Gallagher which caused the problems and he won a penalty when he was upended by Todorov, who had only just come on as a sub. Curtis Main stepped forward to take it, and confidently slotted it home for his first Aberdeen goal.

He very nearly had a second a minute later. A Scott Wright cross found Main unmarked but his header went past the left hand post. He did not really get good enough contact on it but had taken up a great position.

In between all that Niall McGinn was replaced by James Wilson. On 66 minutes Michal Devlin was replaced by Ash Taylor. Inverness then came back into the game and Joe Lewis had a first save to make when a low Walsh free kick beat the wall but it was a comfortable stop.

Two minutes later McKenna was penalised for a foul right outside the box by referee Alan Muir. Walsh this time saw his shot deflect off the wall, at the expense of a corner – from which Inverness equalised. Walsh whipped in a great ball which was flicked on by Jordon Whyte and Brad McKay coming in at the back post was able to force the ball over the line.

On 72 minutes an Inverness side lifted by the goal threatened again when Mitchell Curry looked set to break in behind the defence but Ash Taylor made a very good tackle. The same player again was picked out in space in the same area by his team mates but this time McKenna was on hand to block and divert his cross behind.

The Championship side were finishing strongly. 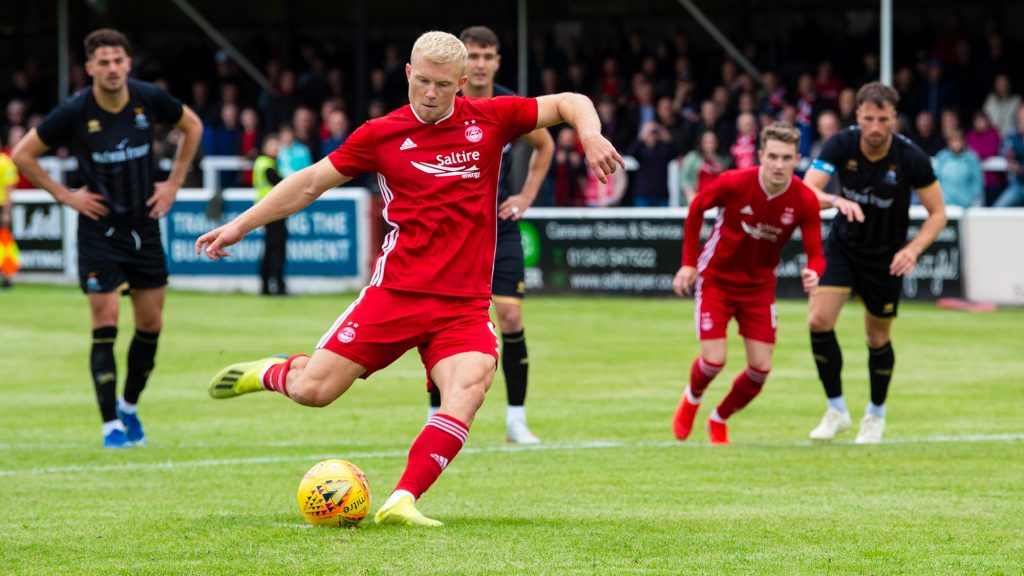 The game actually came to life in the last 15 minutes as both sides pushed for a winner. The steady drizzle had also slickened up the surface which helped the game become a much better spectacle.

At this point Ethan Ross came on for Scott Wright. Young Ethan put in another good display, he has impressed during the pre-season campaign. As did Scott as well.

In the final ten minutes Inverness forced two more corners which James Wilson headed clear. At the other he very nearly found a winner with the last touch of the ball.

On 86 minutes ICT were allowed to break when assistant referee failed to spot the ball had gone out of play. The Inverness players momentarily paused but correctly carried on and in the end Andrew Considine did very well to deal with dangerous cross to the back post.

Then in the final minute Aberdeen had a free kick which led to a corner. Ethan Ross whipped in a good ball which Wilson met at the front of the area and Cameron Mackay in the end produced a smart stop to turn the ball round his near post. Ethan then put over a second corner which was flicked on by Taylor 15 yards out and Wilson looked set to score as he came in at the back post but he just could not get enough of a touch on it.

Plenty of chances for the Dons but in the end they had to settle for a draw. The real stuff starts on Thursday. 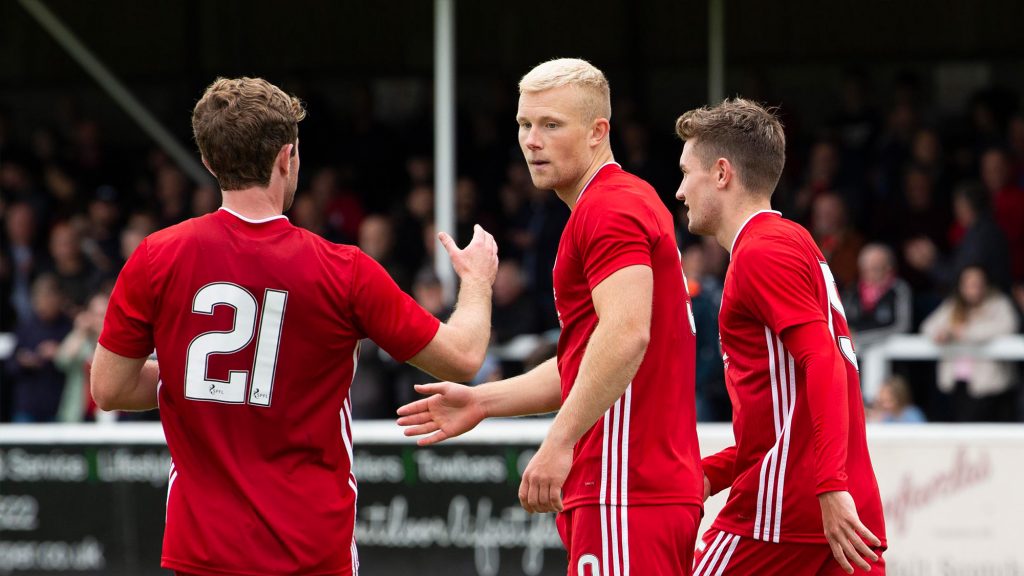 Stevie May (for Gallagher 83), 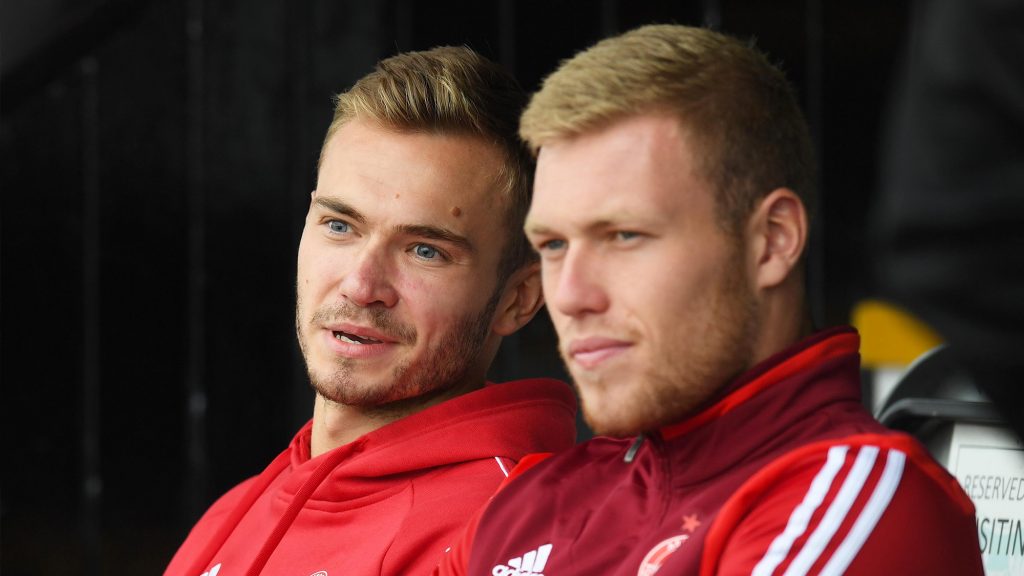