The Dons first open pre-season game took place at Glebe Park this afternoon. In glorious sunshine, a large crowd turned up to get a glimpse of new signings Joe Lewis and Jason Stockley who started the game while Anthony O’Connor and Neil Alexander were on the bench. 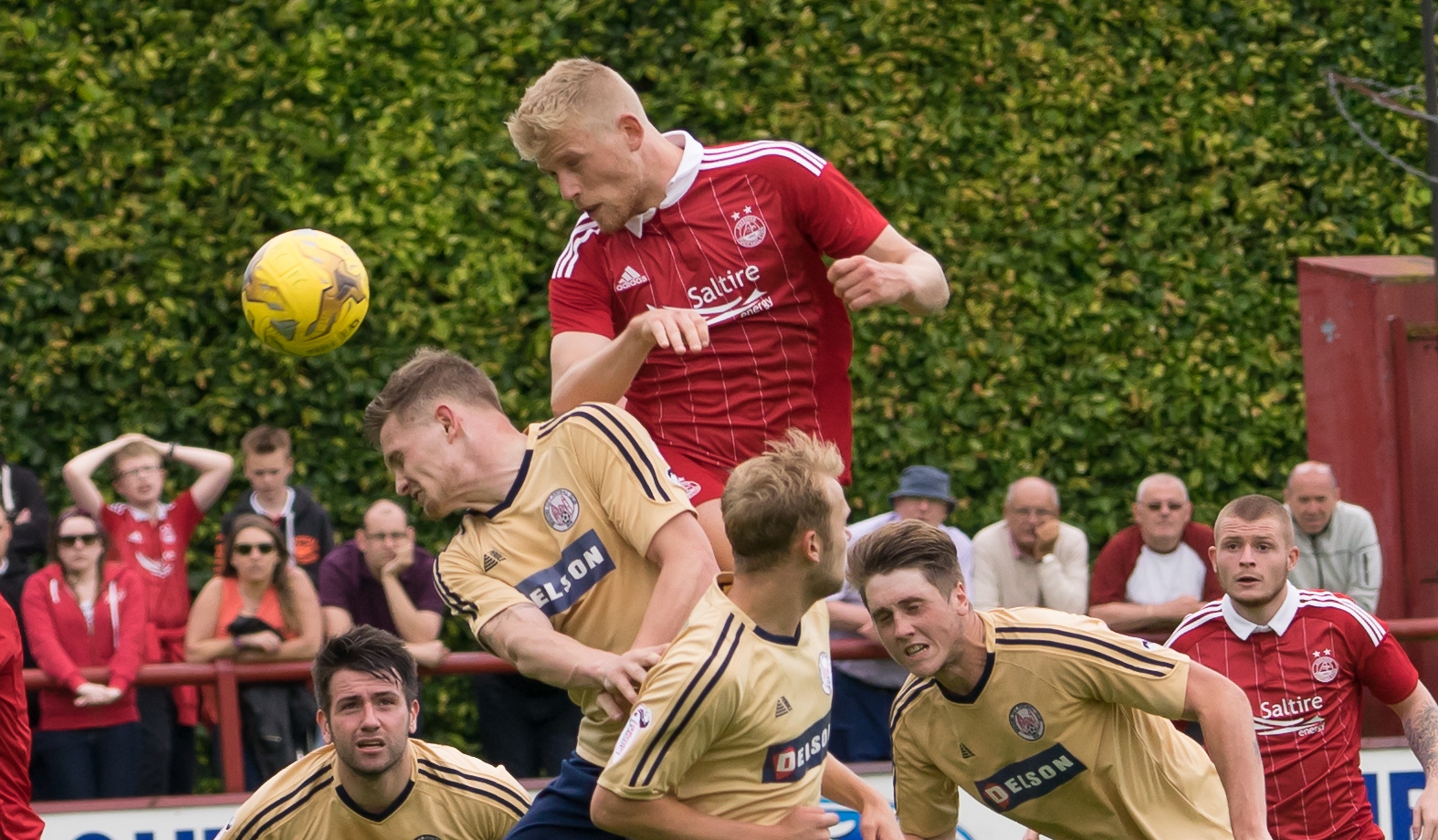 The Dons first open pre-season game took place at Glebe Park this afternoon. In glorious sunshine, a large crowd turned up to get a glimpse of new signings Joe Lewis and Jason Stockley who started the game while Anthony O’Connor and Neil Alexander were on the bench.

In the first minute a good run and cross from Scott Wright down the left led to a chance for Stockley who got to the ball ahead of his marker but could not get enough control on his shot to keep the ball down.

In the third minute, a slip by Reynolds let in Ally Love on the half way line but the defender did really well to recover the situation despite the Brechin man having a ten yard start on him. It was really the only chance the home side had all afternoon. On five minutes, the first corner of the game was taken by Shinnie but his ball in failed to beat the first man.

Last season Aberdeen had ran out 8-2 winners at this venue but this year, Brechin looked a lot more organised. In fairness, last season they took the fixture despite only just having started their pre-season training and it was also manager Darren Dodds' first game in charge.

In the 13th minute, Wright, who looked very lively, played a ball to the back post for Stockley who cleverly headed the ball back across for Jack who was completely unmarked but his header into the ground was very well saved by O’Neil. A minute later, a Rooney shot was blocked by Rodger. It was a good block as the shot might well have gone in.

At this stage, Aberdeen were on top but the Brechin defence were holding a good line. In the 19th minute, more delightful skill from Scott Wright saw him beat two men before nutmegging another and then playing a through ball for Rooney who looked certain to score before Paddy O’Neil produced a superb one handed save.

A minute later though, Aberdeen took the lead after Wright won a corner. Shinnie's ball in was knocked back by Shankland into the path of Stockley and his shot found the top corner of the net despite O’Neil getting a touch.

In the 29th minute, a Flood cross found Stockley in the box but his shot was blocked. On the half hour mark, more tricks from Wright beat a couple of players down the right but his cross from the by-line went out for a goal kick. Brechin then won their first corner but Joe Lewis confidently came and claimed it.

Then on 33 minutes, Aberdeen scored a second. Again it was Scott Wright, this time on the left, who created the chance and Shankland produced a good finish on the turn to score at the near post.

On 41 minutes, Wright again skipped past a couple of players and his cross deserved a goal but Rooney nor Shankley could not produce a finishing touch. Aberdeen then had a number of chances before the half-time whistle but failed to add to their lead.

At half-time Lewis, Wright and Shankland were replaced by Alexander, Pawlett and Smith. The first chance of the second half came when a Logan cross was headed just wide by Rooney. Aberdeen went on to control the half as Brechin were happy to sit in.

After 55 minutes, Shinnie and Jack created an opening for Smith and Cammy was unlucky to see his driven shot across the face of goal just go wide. Then a minute later, Stockley had the ball in the net but the flag went up for offside.

On 56 minutes, Anthony O’Connor made his debut as he replaced Reynolds. A minute later Smith had a dipping shot from the edge of the area which smashed off the crossbar.

What was very impressive this afternoon was Jayden Stockley’s ability in the air. He won absolutely everything and really gave the Dons attack a new option.

Smith had a couple more shots from distance which just went over and in the 65th minute the big English striker was tripped in the box but no penalty was given.

With twenty minutes to go, Flood and Rooney were replaced by youngsters Storie and Ross. Shortly after that, a Shinnie free-kick was flicked on by Considine but Stockley coming in at the back post could not force the ball home. Stockely again caused problems in the area when he knocked the ball to Smith. His snap shot produced a good reflex save from O’Neil. Stockley then looped a header over the bar before being replaced in the 78th minute by Connor McLennan. Considine was also replaced by McKenna.

With ten minutes to go, a Pawlett cross was met by McLennan but his first time shot on the run hit the bar – it would have been a fine goal. McKenna then set up McLennan for an overhead kick and although his contact was decent, the ball was directed too close to the keeper.

Aberdeen probably should have scored a few more goals but they did finish with another. A well worked move between Jack and Ross saw the skipper one on one with the keeper and Ryan showed good composure to round O’Neil and score.