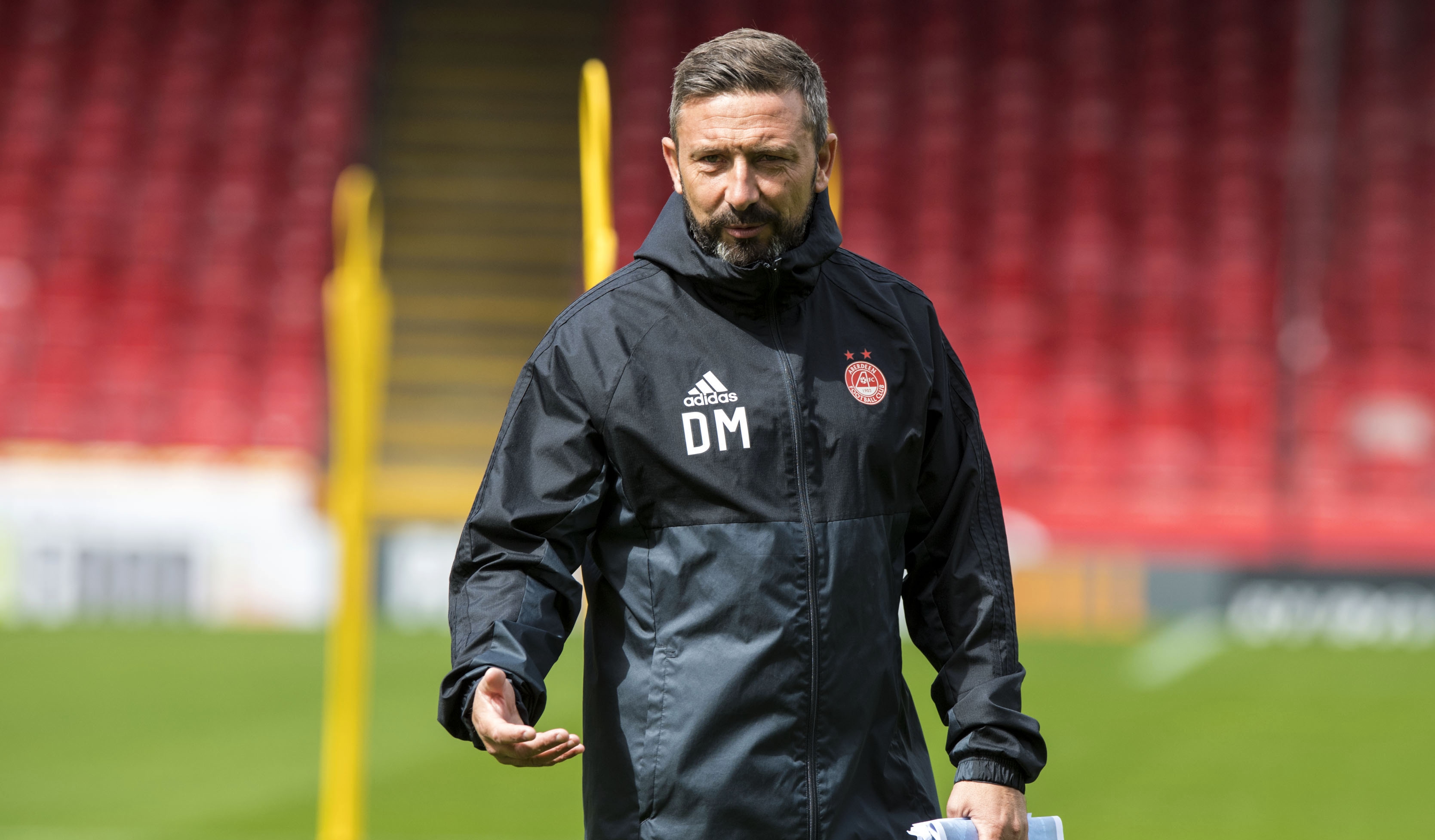 “I thought some of the play on Sunday was very encouraging and positive.

“We had some strong individual performances within a good team performance. We thoroughly deserved the victory. It is not always easy after a long European trip. I think the crowd helped but the players showed their intent from the off.

“It was a good three points from us and a good start.

“I think if you analysis Nicky Maynard’s game, it is all about his link up play, his movement and playing on the shoulder (of the last defender). He looks after the ball well and is a goal threat.

“No matter how many minutes he has had he has always had opportunities. He gets himself between the sticks. He was disappointed he has not scored on Sunday when he has gone round the keeper. But by and large his performance was very good. I have no doubt the goals will come for Nicky.

“Hamilton were as we expected (on Sunday). We anticipated them being a back five. I had watched them against Queen of the South live in the League Cup a few weeks ago. There was a familiarity about them as they have just the one new signing at centre half. They were very much what we expected. They have good players, they are very competitive. you have to try and win your individual battles and earn the right to play.

“I had no problem with anything going on from Hamilton on Sunday. They were competitive. They have shown that in the past, especially at their home ground. We have to overcome that.

“I have no problem with the way Hamilton played against is. I thought it was a good game. It was end to end, a bit too open at times but we managed to bring enough fighting qualities as you would expect in any SPFL game. “The game is meant to be physical. I do have a problem with the comments about trying to get Graeme Shinnie sent off. When you look at it, and we have watched the game back, Graeme has two very minor infringements after being booked. Not six fouls.

“The comments post-match on Sunday about being the small team and always getting decisions against them again I would not agree with. if you look at the games last season, when they scored a penalty here at Pittodrie it was not a penalty. They got a penalty down there in the first 1-0 victory that was not a penalty. So we have been the victims of two penalty decisions that should not have been. So I think that quashes the agreement.

“I thought last season in the games down there when Hamilton got in front in both games they were very good in terms of their defending. Our performances last season were decent but we lost both games and this is the cup. You are either in or out. You would take a poor performance and a winning result and that is what we are after.

“We have to make sure we are more than ready to produce a performance we are happy with but regardless of the performance it is about getting through.

“We will consider freshening it up but we will consider everything. We will try and pick the right team for the night. We will focus on picking the best team that we think will win the game. The League Cup is very important to us and we want to go as far as we can in the competition.

“We are playing away from home against a Premier League team in the cup. It will be difficult but if we can build on Sunday’s performance and have the motivation to go as far as we can.

“Adam Rooney is not going to travel. He has done a bit of work today and he is close but not close enough. he will move on now and try and be available for Saturday. With the injury (thigh strain) we cannot risk it. We have to take the medical advise.

“Everyone else is good to go. Jayden Stockley comes back into it after suspension.

“I have commented on player speculation already. We have no intention of selling any of our players to any of our rivals. Nothing has changed. Teams would be completely wasting their team.” 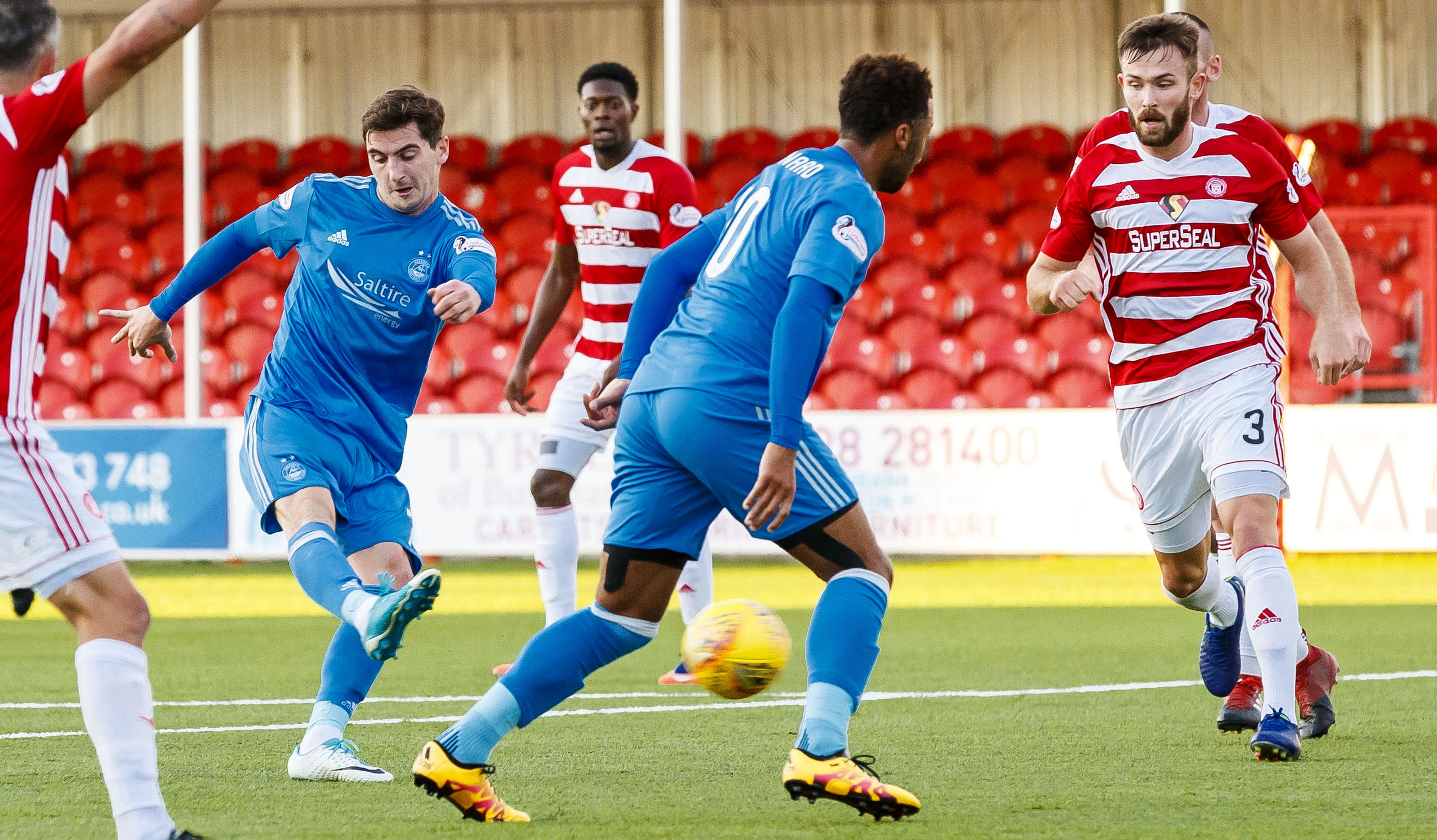 Aberdeen made it back to back wins over Hamilton Academical and in the process made it through to the Quarter Finals of the Betfred Cup. Kenny Mclean’s strike before half time was the only goal in a largely uneventful cup tie at the SuperSeal stadium.

The Dons made one change from Sunday’s league opener against Accies, with Kari Arnason making way for Mark Reynolds in the heart of the defence.

It was the hosts that started off the brighter side and forced two corners in the first 10 minutes, but The Dons cleared their lines on both occasions. The first real chance fell to Steven Boyd after he was played in by Crawford. It was a good break from Accies. Joe Lewis was brave and blocked well, but took a sore one from the Hamilton striker and required some treatment before carrying on. Thankfully Joe was ok.

What followed was a scrappy 10 minutes as both sides struggled to keep possession. There were also a lot of free-kicks throughout the first half. Joe Lewis was once again called upon in the 26th minute as a Crawford free-kick was struck low and hard towards goal, but Lewis stood firm and held with ease.

The first real chance for the Dons came a few minutes later. After a slack kick out from Gary Woods in the Hamilton goal, Nicky Maynard found Ryan Christie inside the box, but Woods made up for his mistake to save brilliantly from Christie at point blank range to force a corner.

From the resulting corner Accies broke away again and passed up a golden opportunity to take the lead. A deflected pass into the box found Boyd and his shot was goal bound, but incredibly was blocked by his teammate Crawford, who was then flagged offside.

That major let off galvanised the Dons and they started to create opportunities. First Shinnie put a shot wide of Wood’s post then the captain chipped to the back post for Considine, who just nodded wide.

The Dons didn’t have to wait too much long for the goal however and they took the lead in the 42nd minute. And it came from a piece of brilliance from Scott Wright.

Unlike Sunday Scott was not involved as much but he produced a superb piece of skill. He turned his marker brilliantly down the left and set up Shinnie at the edge of the box. His shot was blocked, but the ball fell kindly for KENNY MCLEAN was there to thump home from just inside the box.

Just before the break Hamilton had a chance to respond. Greg Docherty found space from 20 yards out and unleashed a shot that was goal bound, but Lewis saved well and tipped wide.

The second half started at a fast pace and Xavier Tomas headed over from a Crawford corner. Back came the Dons however and Nicky Maynard got away from a defender before firing just over from the edge of the box.

The Dons were playing some nice football and the passing between McLean, Christie and Wright nearly created an opportunity, but nothing came of it. Wright was substituted in the 66th minute for Gary Mackay – Steven and Greg Stewart replaced Christie shortly after.

Although Hamilton were chasing the game the Dons defence were always doing enough to make sure the score line didn’t change. Lewis commanded his box brilliantly and caught any cross that made its way into the box.

Miles Storey came on in the place of Nicky Maynard, who had run himself into the ground. Shinnie found space once again at the edge of the box and his shot was heading for the top corner, but well caught by Woods.

Andy Considine saw a half volley hooked wide at the back post after a Greg Tansey corner as the Dons tried to kill the tie off. They nearly did just that on 82 minutes. Miles Storey broke away on the left and a great ball to the back post found Stewart unmarked, but he couldn’t get a good enough contact and fired a volley over from eight yards out. He probably had more time than he realised.

Hamilton surged forward for an equaliser and Gillespie twisted and turned before firing just wide of Lewis’s post. Shinnie was then bundled over on the by-line outside the Hamilton box and the resulting free kick saw Stewart head wide at the front post. He was almost too close. If Greg had just flicked it on it would have been goal bound.

Although the last ten minutes were nervy the Dons defended well and Accies looked void of ideas to break them down.

Referee Nick Walsh added two minutes on at the end of the match and the Dons comfortably held on to book their place in the Quarter Final of the Betfred Cup.

Not a pretty performance but job done.

Shortly after the final whistle the draw took place for the last eight and a trip to Motherwell for the Dons in the Quarter Finals.

A huge thank you to the 2,028 (updated figure) Aberdeen fans who travelled to the match.