McLean and Rooney at the double

Derek McInnes made two changes to the side that defeated Kilmarnock in their previous match. Out went Anthony O’Connor & Dominic Ball- who both found a place on the bench with Kari Arnason promoted from the bench and Ryan Christie who returned from injury. New signing, Sam Cosgrove was announced in the build up to the game but just missed out on a place in the squad after driving up to Inverness from England. 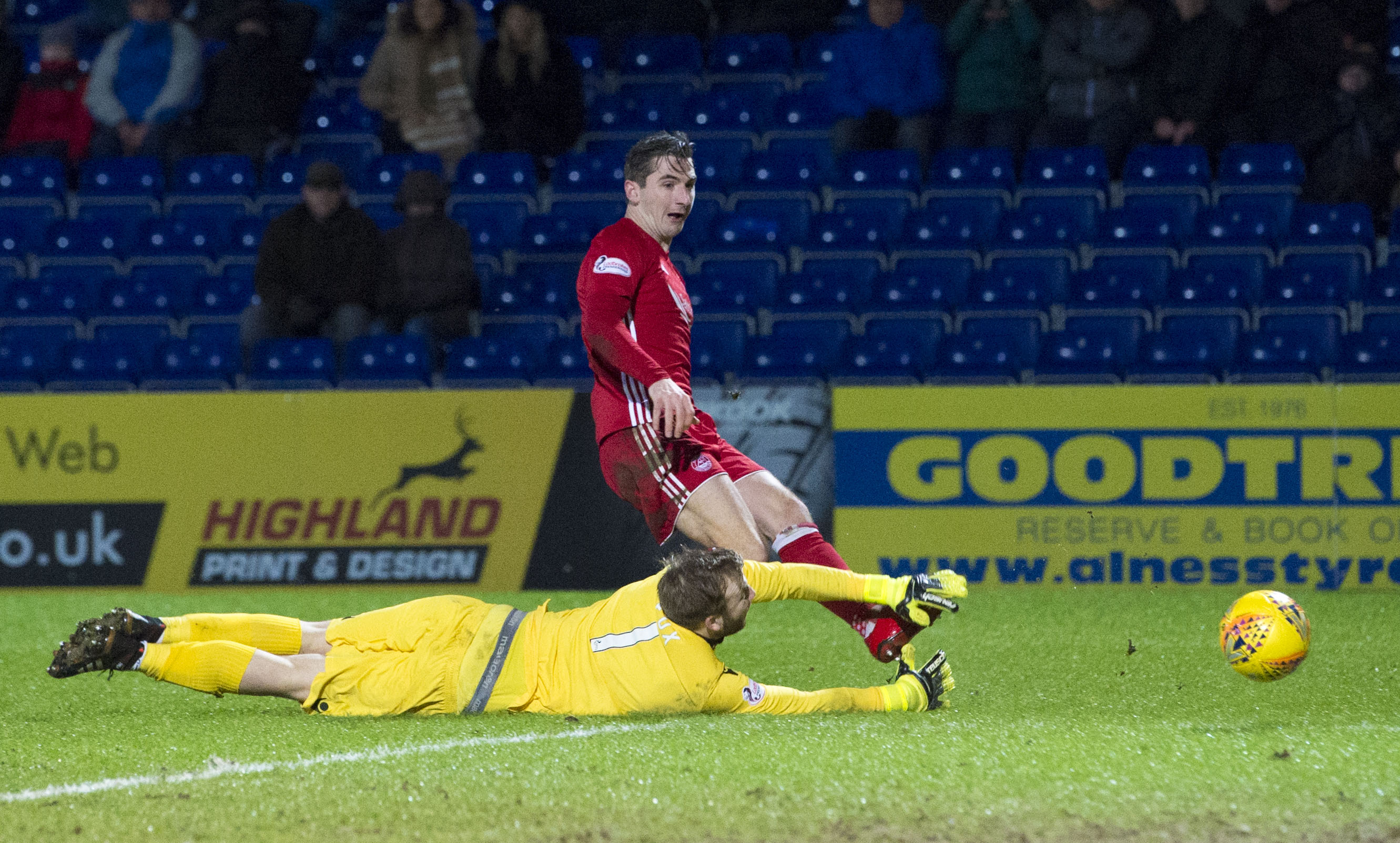 Derek McInnes made two changes to the side that defeated Kilmarnock in their previous match. Out went Anthony O’Connor & Dominic Ball- who both found a place on the bench with Kari Arnason promoted from the bench and Ryan Christie who returned from injury. New signing, Sam Cosgrove was announced in the build up to the game but just missed out on a place in the squad after driving up to Inverness from England.

On a cold and wet evening in Dingwall, The Dons started brightly with a lot of possession in the opening few minutes. It was County who won the first corner though but the long ball to the back post was eventually cleared by Aberdeen.

The first effort on goal also came for the home side- Eagles with a low shot which just went wide after Kenny McLean had appeared to be fouled in midfield. Seconds later, Danny Rogers got down well to his right to block a goal bound Souttar header, and Graeme Shinnie cleared.

12 minutes in and Gary Mackay-Steven had an effort blocked away for a corner, which Scott Fox grabbed easily under no pressure. Two minutes later, a well worked move involving Shinnie,

Mackay-Steven and Considine down the left saw a ball fizz across the box but McGinn took a fresh air swipe at it and County cleared.
Aberdeen were started to move through the gears though.

20 minutes in, a short back pass from Arnason caused problems for Rogers but he was out smartly to clear the ball out for a throw to County. The Dons won the ball back and broke up field- eventually a neat reverse pass from McLean found Christie who did well to win a corner for the visitors.

Mackay-Steven then swapped wings with McGinn, the Ulsterman coming over to the left hand side. And It was he who had an effort from the side of the box which went narrowly wide of the target a few moments later.

Aberdeen were now well on top and took the lead on 28 minutes.

Great play by McGinn as he pinched the ball in midfield. Niall drove forward and chipped the ball to the back post. Considine picked it up and played it back to Christie who laid it off for McLean. The midfielder’s fierce effort took a deflection off Liam Fontaine and although Fox touched the ball onto the post, the shot was too powerful to keep out.

Minutes later the Dons had the chance to double their advantage when Chow brought Christie down inside the area. Referee Dallas had no hesitation in pointing to the spot. Rooney stepped up and slotted the penalty coolly to Fox’s left – the keeper had gone to his right.

Aberdeen were playing some glorious football despite the conditions.

The Dons made it three-nil a short time later! Fantastic build up play, McGinn drove down the left and delivered an exquisite ball for Rooney to flick into the back of the net. It was a wonderful finish from Adam. The Dons were in dreamland before half time. As were the 1,014 members of the Red Army who had braved the drive north.

Aberdeen continued to press and Christie was next to try a shot which curled just wide of the post on 38 minutes. The home side looked shell shocked but did venture forward on the 42nd minute,

Eagles fired the ball well over the bar from outside the box.

The Dons started the second half on the front foot as well. Rooney was close to getting in on the end of a low ball but he couldn’t quite reach the striker.

On the hour mark, Graeme Shinnie picked up a yellow card for pulling back a County defender as he tried to break away just outside the County box. A bit harsh on the skipper. There were plenty of other fouls which had gone unpunished previously. Graeme was rightly not impressed.

After 62nd minutes, Kenny McLean tried a brilliant ball over the top of the County defence and it was nearly met by the on rushing McGinn but proved just too heavy for Niall to get under control and County cleared.

Two minutes later danger for the Dons, a ball found Draper unmarked at the back post, his cut back was decent but there was no one following up for the home side and Arnason was well positioned to clear the danger.

A few minutes later it was The Dons who scored again to make it 4-0, with Kenny McLean capitalising on a horrendous mistake from keeper Scott Fox to slot the ball into the back of the net.

Kenny deserved his two goals this evening as he was outstanding.

The first change of the night for the Dons took place on 67 minutes with Scott Wright replacing Niall McGinn, who had also performed superbly. Then Greg Stewart replaced Gary Mackay-Steven a couple of minutes later. The manager clearly with one eye on Saturday.

A great driving run by Scott Wright saw him lay the ball off for Christie but his low powerful shot across goal deflected narrowly wide of the post for a corner.

Out of nothing County grabbed a goal back on 76 minutes when a mix up in the Dons defense saw Schalk nip and loft the ball over Rogers in the Dons goal. A long free kick had not be dealt with.
Shay Logan was then booked for a foul which stopped a County attack. Shinnie tried an effort from distance on 81 minutes which Fox saved comfortably and then County raced up the park and grabbed a second goal- Schalk driving through the Dons defence and firing beyond Rogers. Again it was a simple long ball which did the trick.

Suddenly there was a bit of panic as Owen Coyle’s side almost got a third but Shinnie made a vital block.

With County still hunting for a third goal to make the final few minutes even more interesting, Anthony O’Connor replaced Ryan Christie. Greg Stewart picked up a booking when he brought down a County player as he attempted to get the ball. The fourth official signaled two minutes of added time and with that the Dons played the match out slightly more comfortably to return to second place with another 3 points claimed away from home.