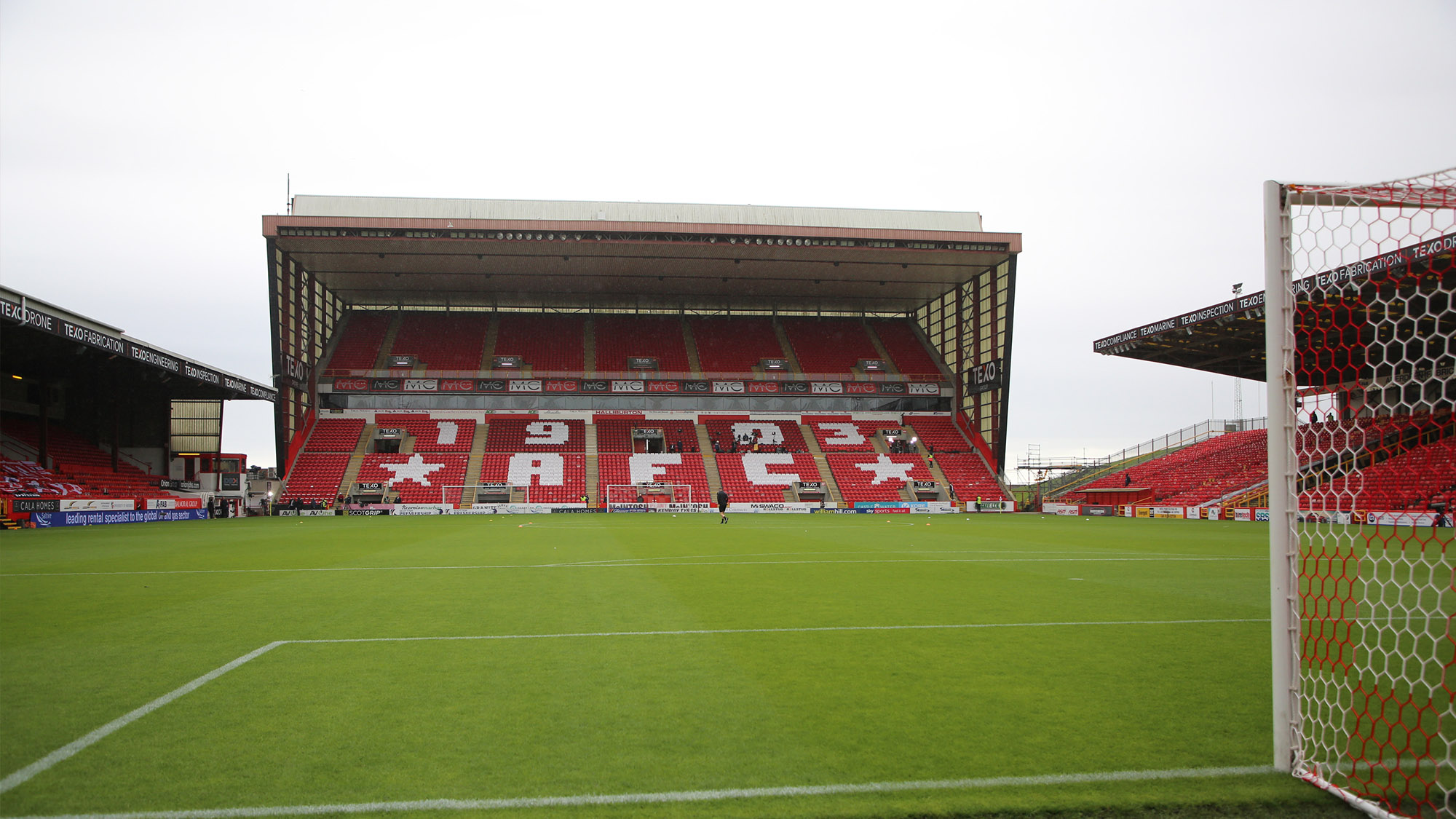 Ash Taylor sat down with the media via Zoom to preview Sunday’s game with Livingston. Also read what Tommie Hoban had to say ahead of the game by clicking here. 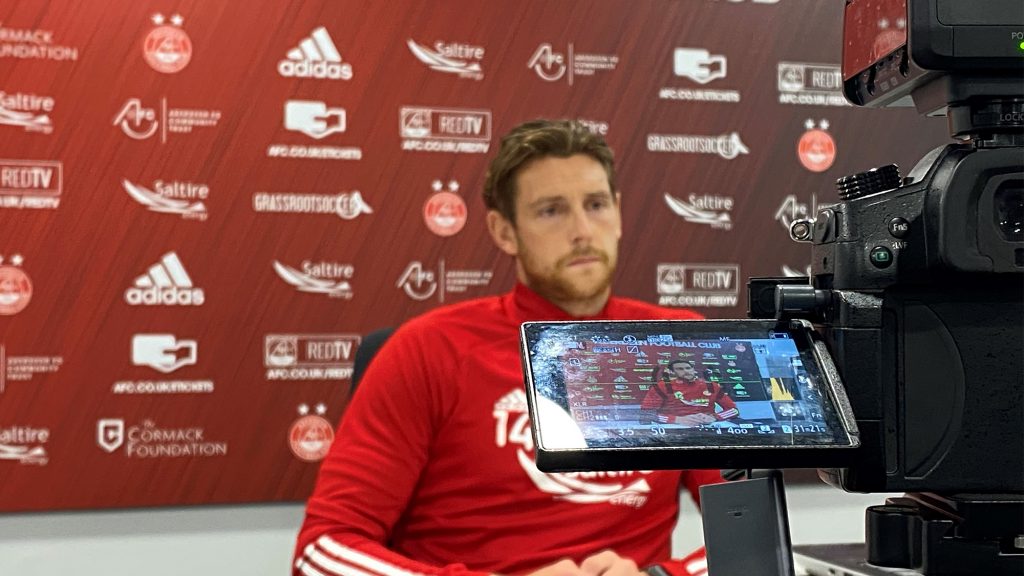 “It is nice to get the three points last night and get that positivity through the club and we look to concentrate on the football side of things and we look to kick on.

“It was nice to getting back and concentrating on football and putting everything behind us and we are looking to move forward now. We have been sticking together throughout these tough times with everything that has been going on and it is nice to get that first three points of the season.

“As soon as the lads apologised, we got around each other and we got back onto the training ground as soon as we were allowed to and concentrated on our football.

“We are a tight group and it is important that we showed that last night with a gritty performance and we look forward now to Sunday.

“I think it has been a tough learning curve for the players. It is time to concentrate on football and we move forward as a group of lads and as a strong knitted team.

“It was nice to get a bit of rustiness out of us last night, it was only our second competitive game in about five months. We will get better as the games go on. The quicker the games go on the better we will get. 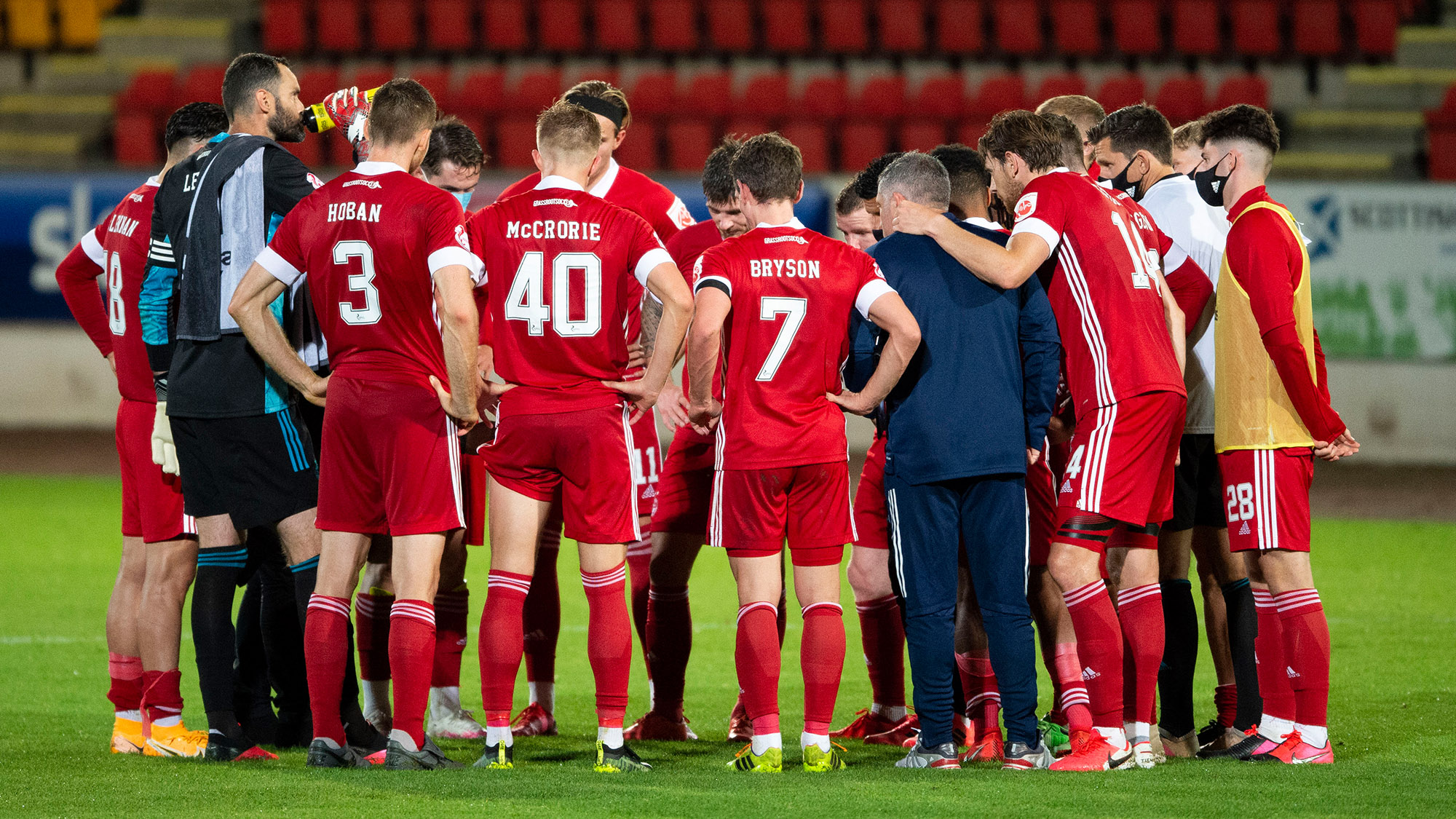 “Recent events I think can bring us closer together. You can be closer as a group when the negativity comes your way and you want to prove everyone wrong. You want to put things right, the three points has put us in the right direction to put the recent events behind us.

“You need to win your home games. If you win your home games and pick up points on the road as you go along puts you in a good position. It is important that we make Pittodrie a fortress again and make it a tough place for teams to come to.

“I wouldn’t say that it is a sense of relief now that Dykes as left them. I am sure that we would have been capable to deal with him like we have done in previous times. He is a good player and he has got a great move and it does weaken Livingston a little bit. But they still have other good players and are still a dogged side, like they showed against Rangers. They were tough to beat and tough to break down. We know what they are about, and we know that we will have a tough challenge against them. It is important that we do our job and put in a good performance and try and get those three points again.

“Last night showed the depth of squad that we have. We had Tommie coming in who has not played for over a year and he has proven to be a good addition. He is a great player and it was really important for him to complete the 90 minutes.

“Ross had a great debut; it was fantastic for him to come in and put in a composed performance. It gave some of the guys who haven’t really had opportunities over the last year to show what they can do. It was important for the whole squad to have that performance and get the three points.”

The Last Time Out 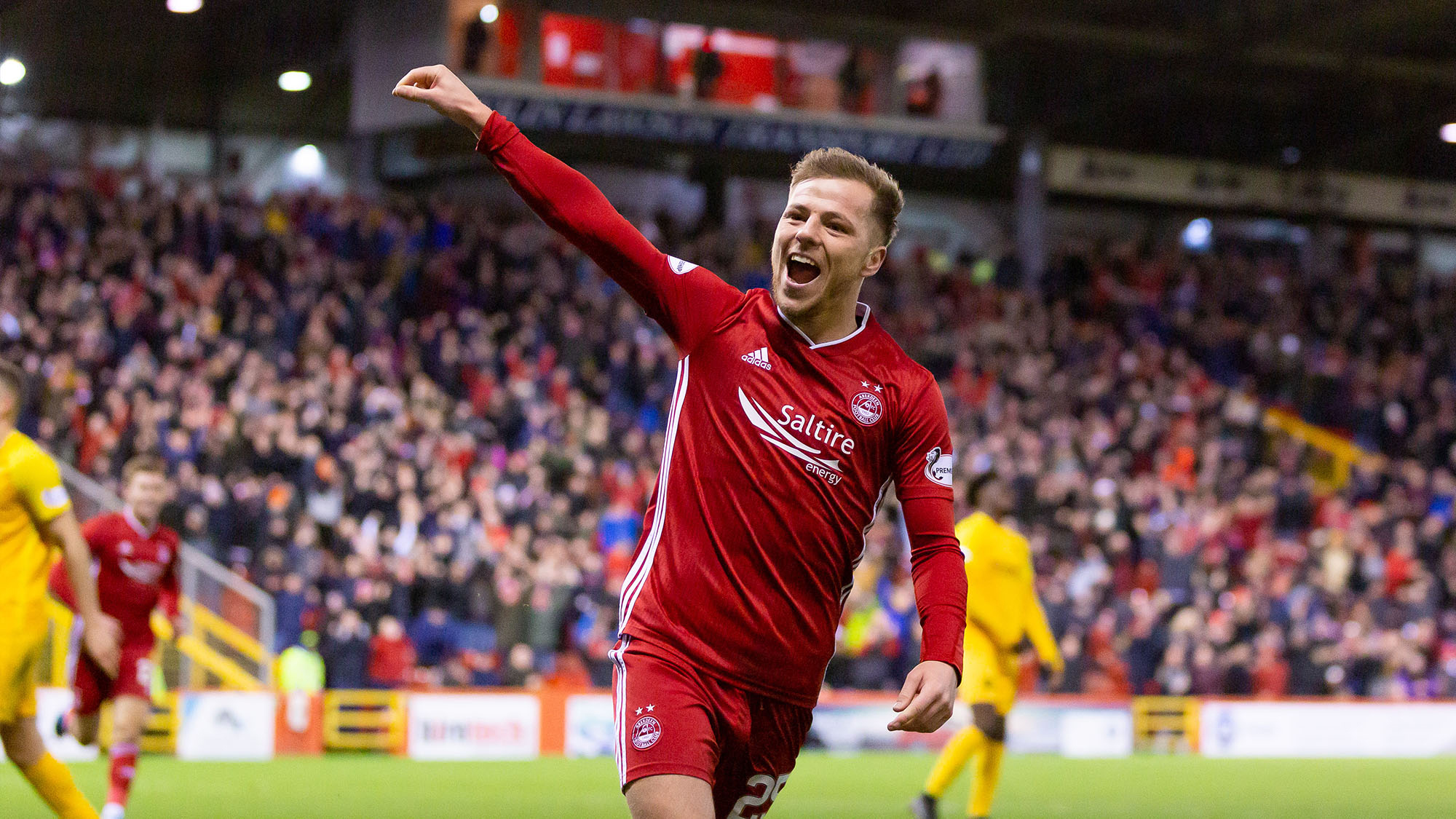 The two teams last met on Boxing Day last year at Pittodrie. Connor McLennan put the Dons ahead after 13 minutes and Bruce Anderson doubled Aberdeen’s advantage with a very well taken goal with 10 minutes left. Lyndon Dykes halved the deficit with five minutes to go but it was Aberdeen who came away with all three points.

Head to Head at Pittodrie 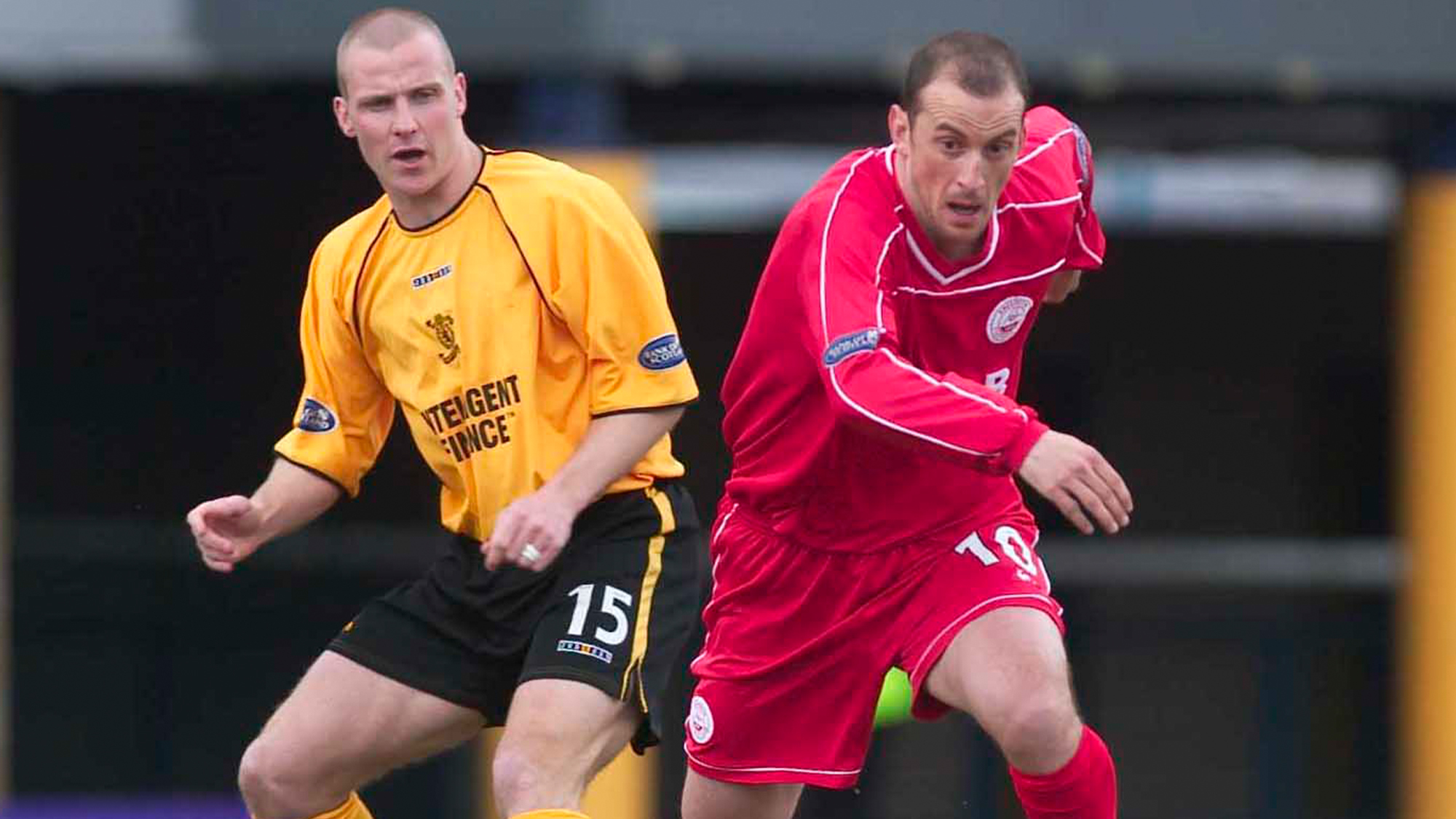 Match Report | The Dons make it two wins out of two 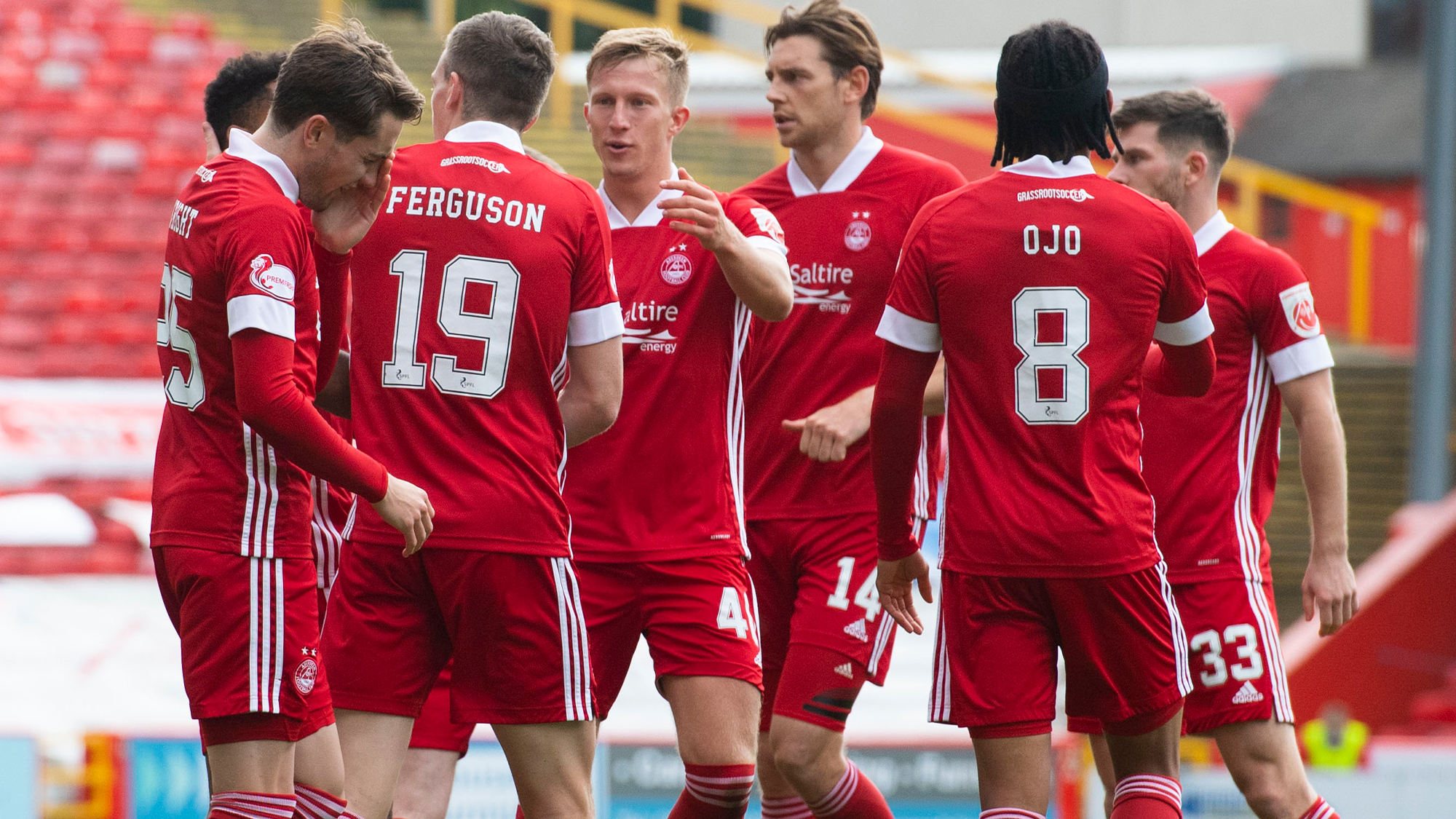 An improved second half showing and an early goal of the season contender from Scott Wright saw Aberdeen make it two wins out of two to head into Thursday’s European tie with growing confidence.

After getting the first win of the season in the gruelling 1-0 win at St Johnstone on Thursday night, Aberdeen boss Derek McInnes made five changes to his starting XI, handing out a debut to new loan signing Marley Watkins, also drafting in Shay Logan, Scott McKenna, Matty Kennedy and the goalscorer from Thursday night, Ryan Hedges. Funso Ojo, Ronald Hernández and Tommie Hoban started on the bench with Niall McGinn and Dean Campbell both out of the 18 altogether. Curtis Main and Bruce Anderson returned to the matchday squad on the eight man bench.

Livingston’s form has improved of late, drawing at Motherwell and at home to Rangers after defeats to St Mirren and Hibs in their first two games. Manager Gary Holt made two changes from that 0-0 with Rangers, Ross McCrorie’s twin brother Robby replacing Max Stryjek in goal and Scott Robinson coming in for Jack Hamilton, both of them dropping to their eight man bench.

Logan was in early action with a well timed challenge on Forrest in the Aberdeen box after seven minutes from a quick break through the middle. Jonny Hayes wasn’t very far away in the 12th minute following good work from Scott Wright and Watkins. Hitting the ball from the left edge of the area, it took a deflection off Devlin and looped just wide of goal.

The game became pretty scrappy from there until the half hour mark, when Kennedy darted away down the left before spearing in a low cross. Ferguson met it on the penalty spot but couldn’t get a clean connection on the turn and McCrorie saved easily.

Livi should have had the lead in the 33rd minute when Kennedy was dispossessed on the edge of his box. Devlin played it in to Robinson, Joe Lewis staying big to a make a crucial save with his left leg, the ball rebounding to Sibbald whose drive at goal was blocked wide of goal by Kennedy.

It was the start of a good spell from the visitors who started to pin Aberdeen back, but Sibbald took the first yellow card of the game after clattering Ferguson in the 43rd minute. Devlin joined him in the book 30 seconds later after hacking down Kennedy on the run down the left in pretty much the last action of a disappointing half.

There was one change for Aberdeen at the break, Funso Ojo replacing McKenna, McCrorie dropping in to centre-half.

The Dons opened more brightly and were rewarded in the 48th minute when a move that began with Ash Taylor bringing the ball out from the back, ending when Ferguson was clipped in the box by Sibbald to concede a penalty. Ferguson stepped up and rifled the spot kick into the roof of the net.

Livingston responded immediately with a corner that Aberdeen eventually scrambled clear, but it was a reminder of the threat posed by the opposition.

The Dons made it 2-0 with a terrific goal in the 55th minute, Hedges bringing the ball inside, playing a lovely combination with Wright, Hedges getting the ball back from him before slotting Wright back in to produce a fine finish to double the lead. Just past the hour, McGeouch came on for his first appearance of the season in place of Wright.

It should have been three in the 67th minute, Watkins getting in behind from an Ojo pass, only to be denied by a fine save from McCrorie, similar to Lewis’ in the first half. Aberdeen recycled the ball well and Hayes’ cross picked out Watkins at the back post, his diving header clawed away by an even better save.

Livi dragged themselves back into the game in the 69th minute, Fitzwater doing well down the right to win the ball from Kennedy and then cross for Pittman to poke past Lewis from inside the six yard box, though Fitzwater came close to taking the ball out of play before crossing.

Hayes fired just over from the edge of the box in the 75th minute as the Dons looked to reassert control of the game, Livi then bringing off Forrest for Tiffoney a minute later. McLennan and Main were the next Aberdeen subs, replacing Watkins and Hedges in the 81st minute, the number of changes making the game rather disjointed for a period.

Livi had claims for a penalty in the 86th minute as the Dons desperately tried to scramble the ball clear of their six yard box, the referee waving them away as Aberdeen hearts were in mouths for a second. A minute later, Serrano absolutely clobbered Logan yet didn’t even receive a word from the referee for a dreadful challenge worthy of at least a yellow card, if not more. Aberdeen took the opportunity to bring on Hoban for Kennedy as Logan took some treatment from the physio as we headed into five minutes of added time.

In the third of them, Hamilton got a sight of goal as Livi fizzed in a ball from the left but fortunately, he couldn’t quite get his angles right and stabbed the ball just wide of the post. That though was that, Aberdeen making it six points out of six in a big few days for the club.