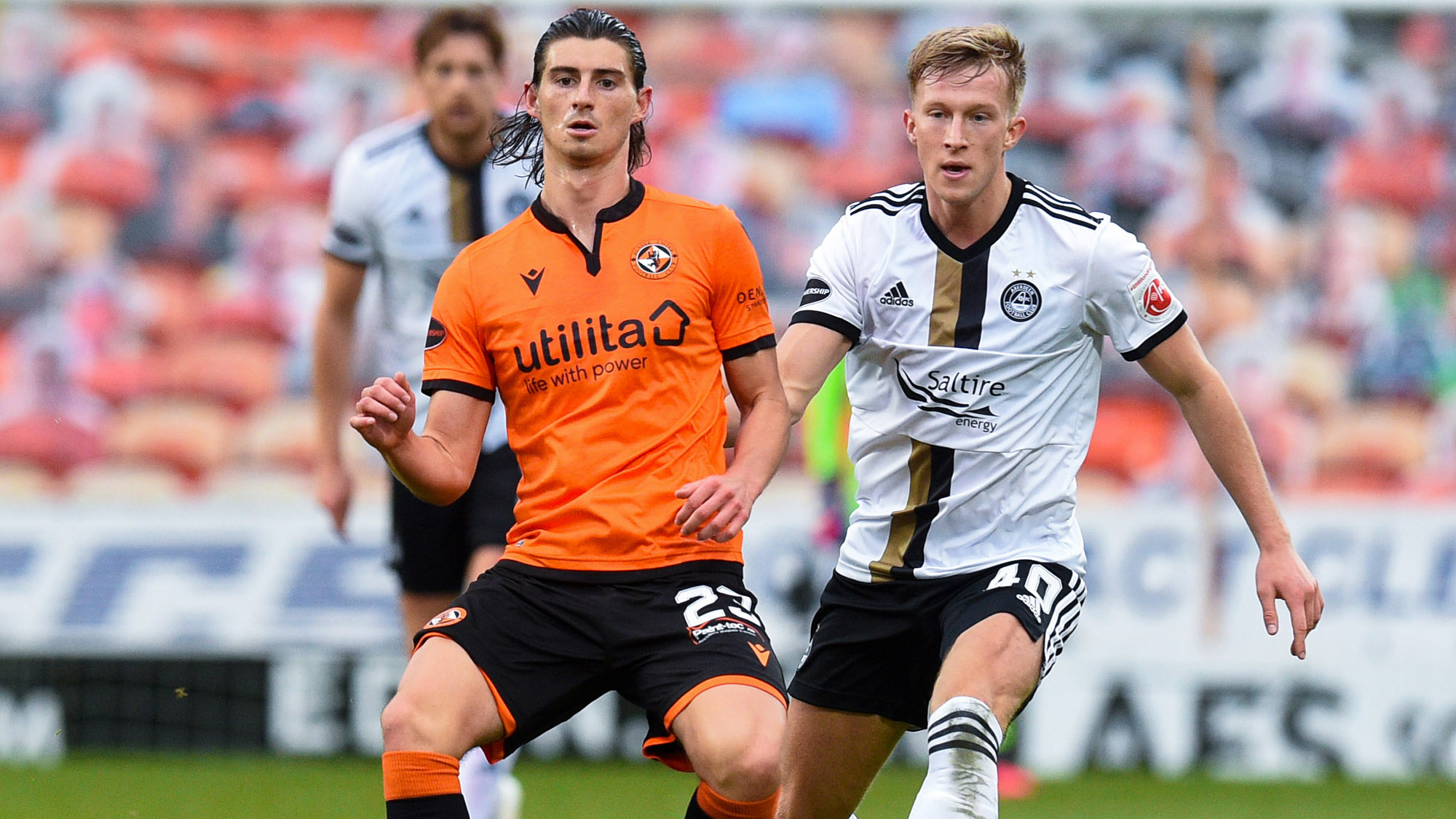 Interim manager Paul Sheerin sat down with the media, via Zoom, this lunchtime to preview Saturday’s game with Dundee United. 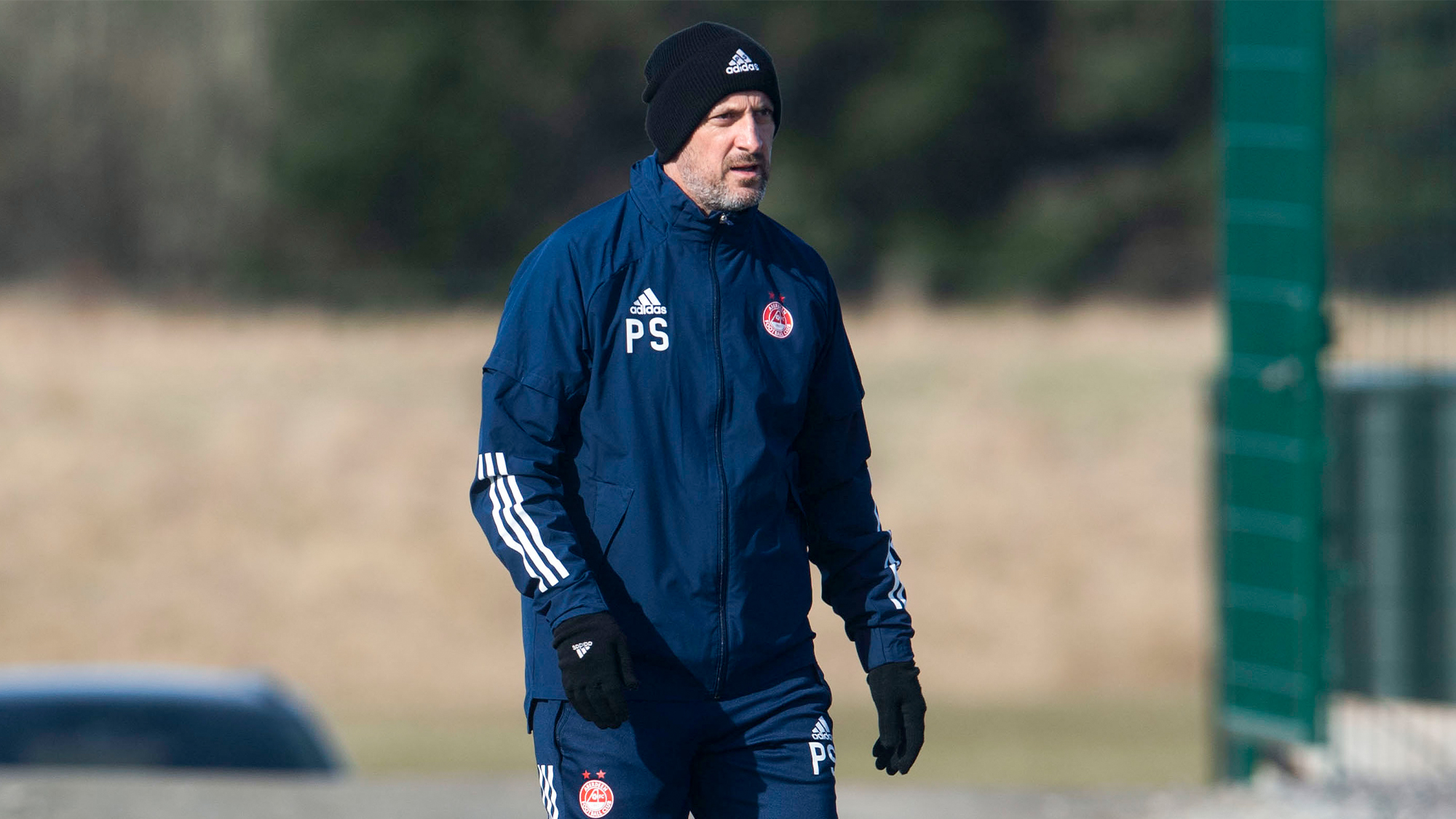 “Initially the mood in camp was pretty subdued. Everybody felt it with Derek and Tony leaving. They played a massive part in all of our careers as players and coaches over the last eight years. It was a subdued period, slowly we have tried to drag them out of it a bit and hopefully come Saturday they will be ready to go to try and get a result.

“The nature of the beast is that the players need to dig in and show a bit of professional pride.

“I think we were fortunate not to have a game last weekend. It allowed the dust to settle a little. We started afresh on Monday and it has been a case since then of concentrating on our game on Saturday.

“I worked with Derek and Tony for seven years and we have been striving for the past six weeks to try and turn things around and to try and score goals. We understand exactly what we need to do.

“The chairman has asked me to look after things for the foreseeable future, he hasn’t put any huge demands on results or anything like that but like everyone else he wants us to pick up points as quickly as we can and see where that takes us, that is all that we can do at the minute. 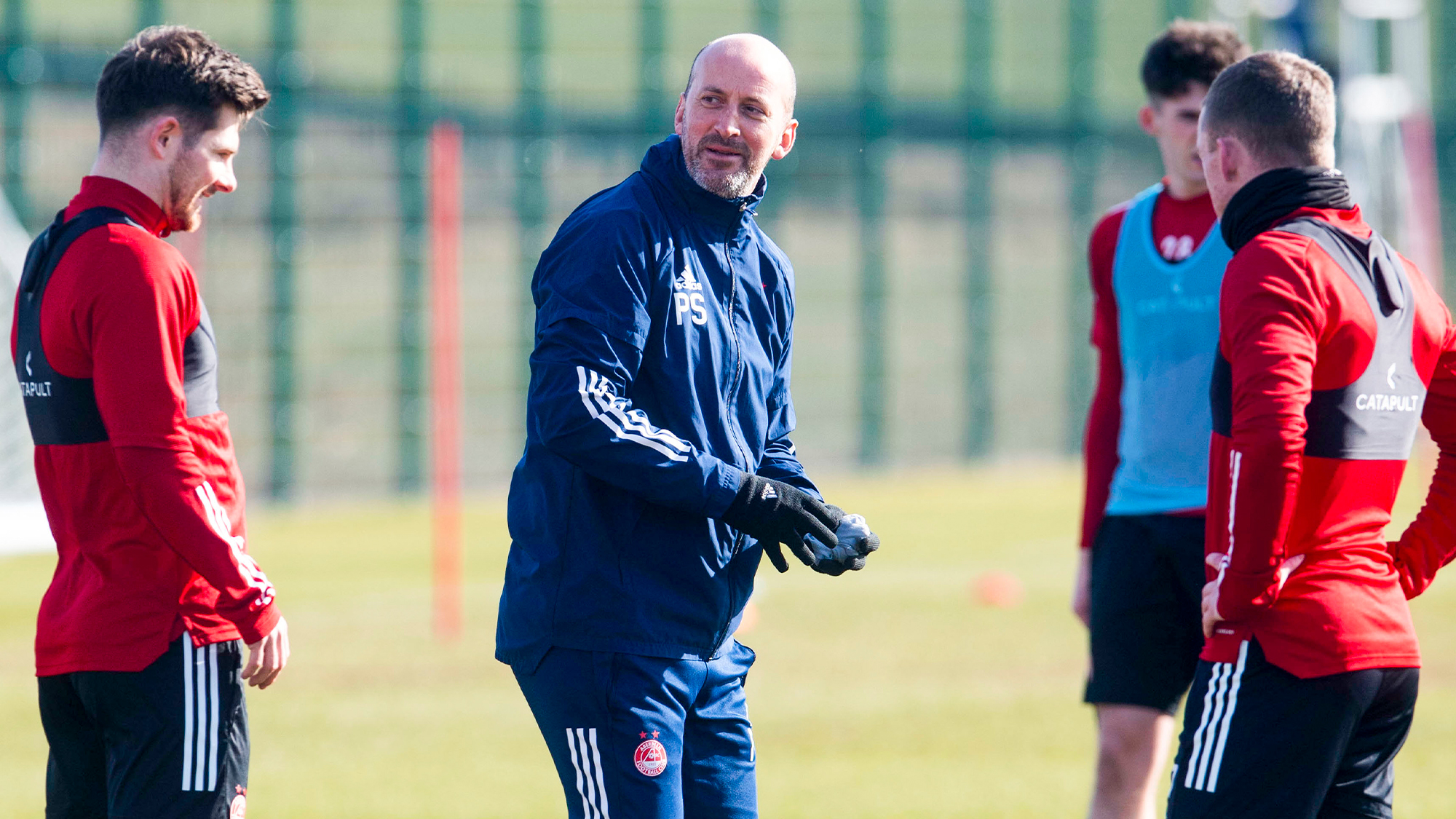 “I am in as interim manager; I have been at the club for seven years and have a familiarity with the players so it is not like there is going to be a ‘new manager bounce.’ It is slightly different in that aspect. All that we can do is put the demands that we have done on the players and hope that they respond. There haven’t been wholesale changes, there attitude has been a constant. They are hardworking, keen to do well and that has never changed. Hopefully we can get ourselves in amongst the goals and try and relax a wee bit more than we have done in recent weeks and try and get an upturn in our form.

“It has been two tight games with Dundee United this season and I am expecting the same this weekend. They were just promoted last season, they have more than held their own in the Premier League this season and we know how difficult it will be. Going to Tannadice is always a massive game. It is unfortunate that we can’t have a crowd in. I know as a player and as a staff member that they are always huge games for the fans. From that point of view, it is disappointing. We recognise how big a game it is against them and we will go there, hopefully relaxed, and confident and will do all that we can to try and get the three points that everybody desires.

“All three points are the same, but it has been a tough couple of weeks, it would be nice if we could take a bit of pressure off and get the win. We have the Scottish Cup after that and hopefully we can take a breath leading into that one.

“Fraser Hornby has trained this week and he should be okay to come into the squad, his training has been a little bit split. Other than that, it is the same squad as it was for the Hamilton Accies game.” 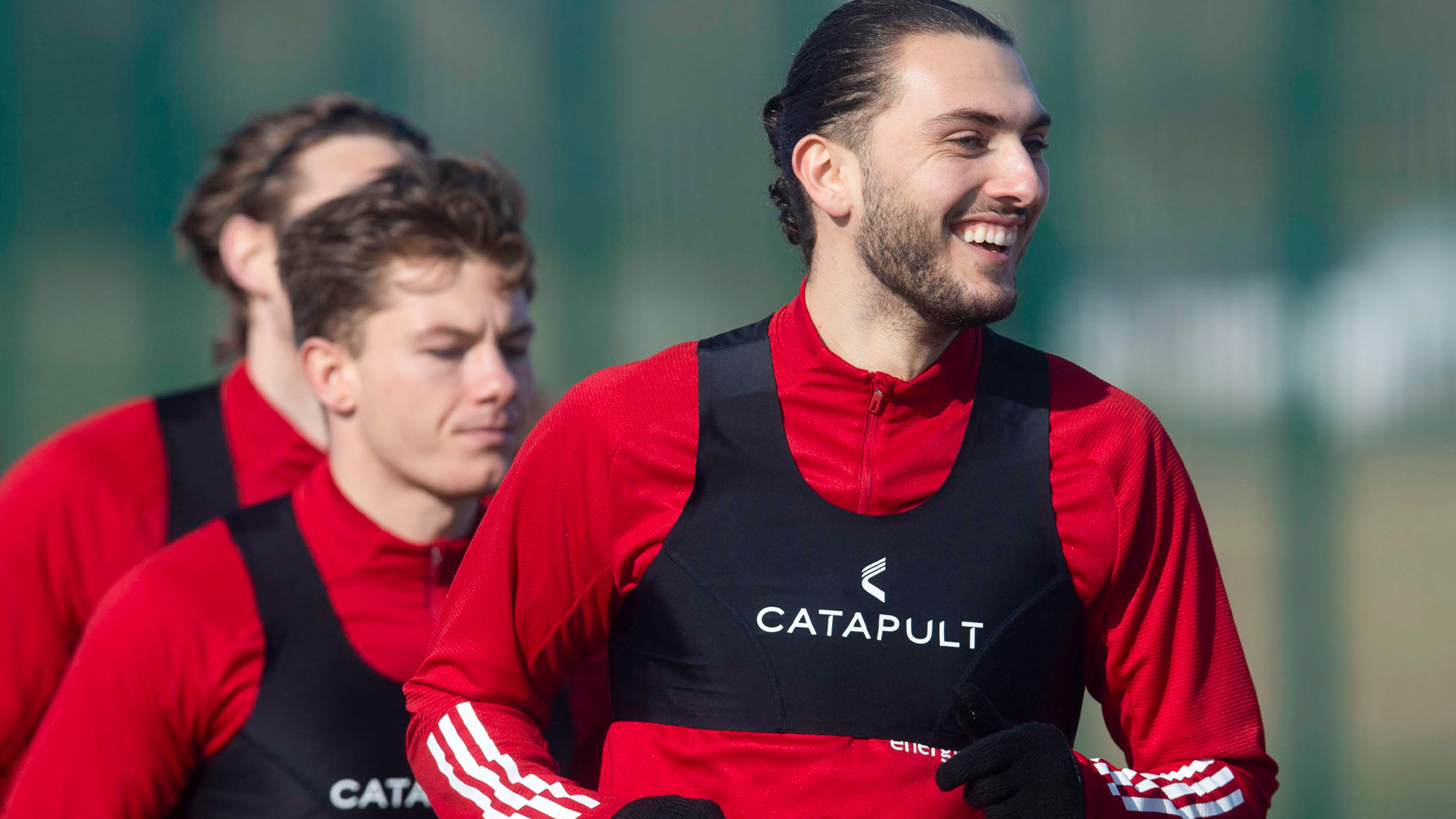 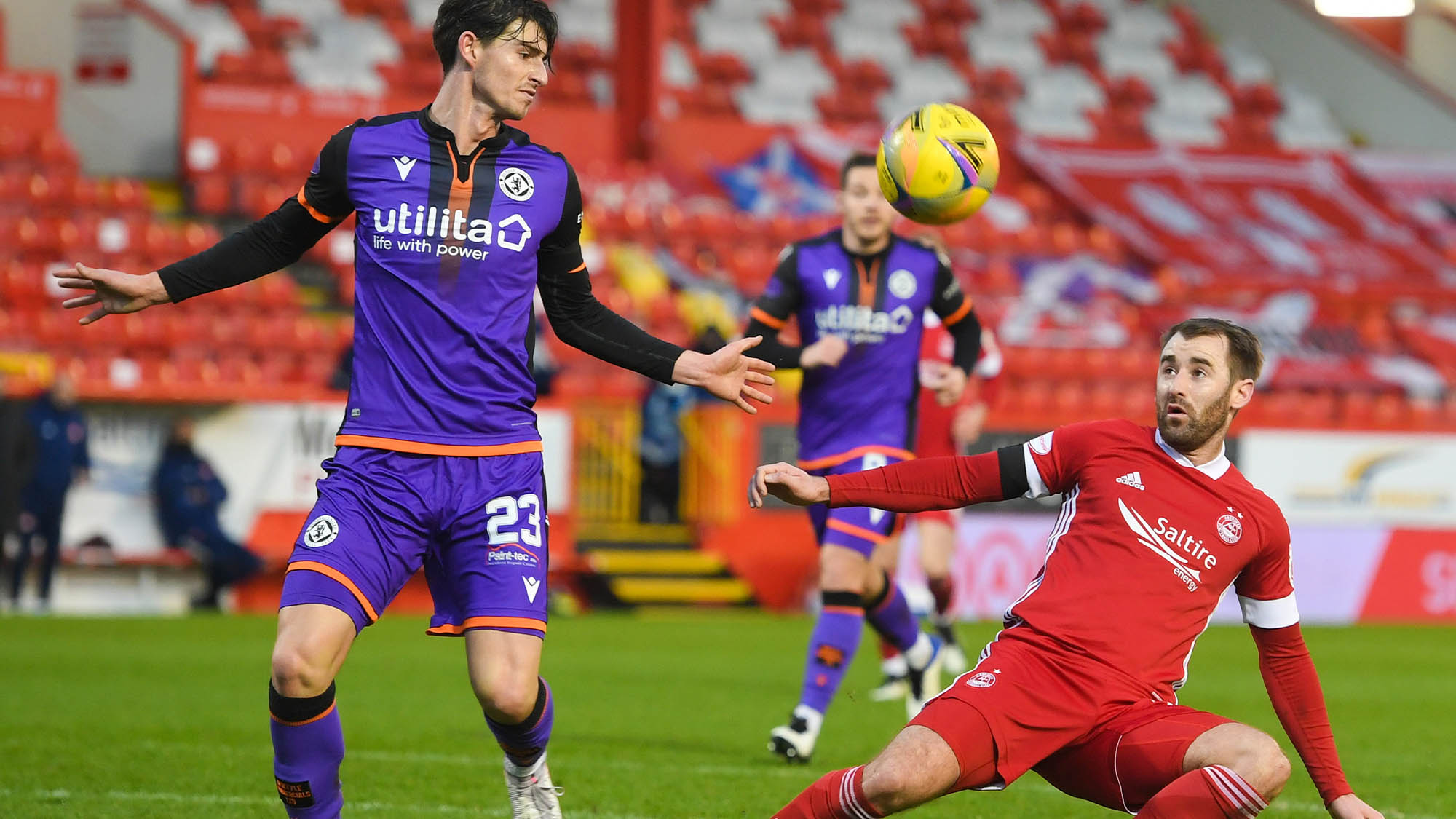 The sides met at Tannadice just three days after The Dons had lost to United in the Scottish Cup at the same venue. Aberdeen took all three points thanks to first half goals from Zander Diamond and John Stewart, who was later sent off. The home side pulled a goal back early in the first half through Jason Scotland. Despite being down to 10 men for the majority of the second half, Aberdeen held on for all three points. 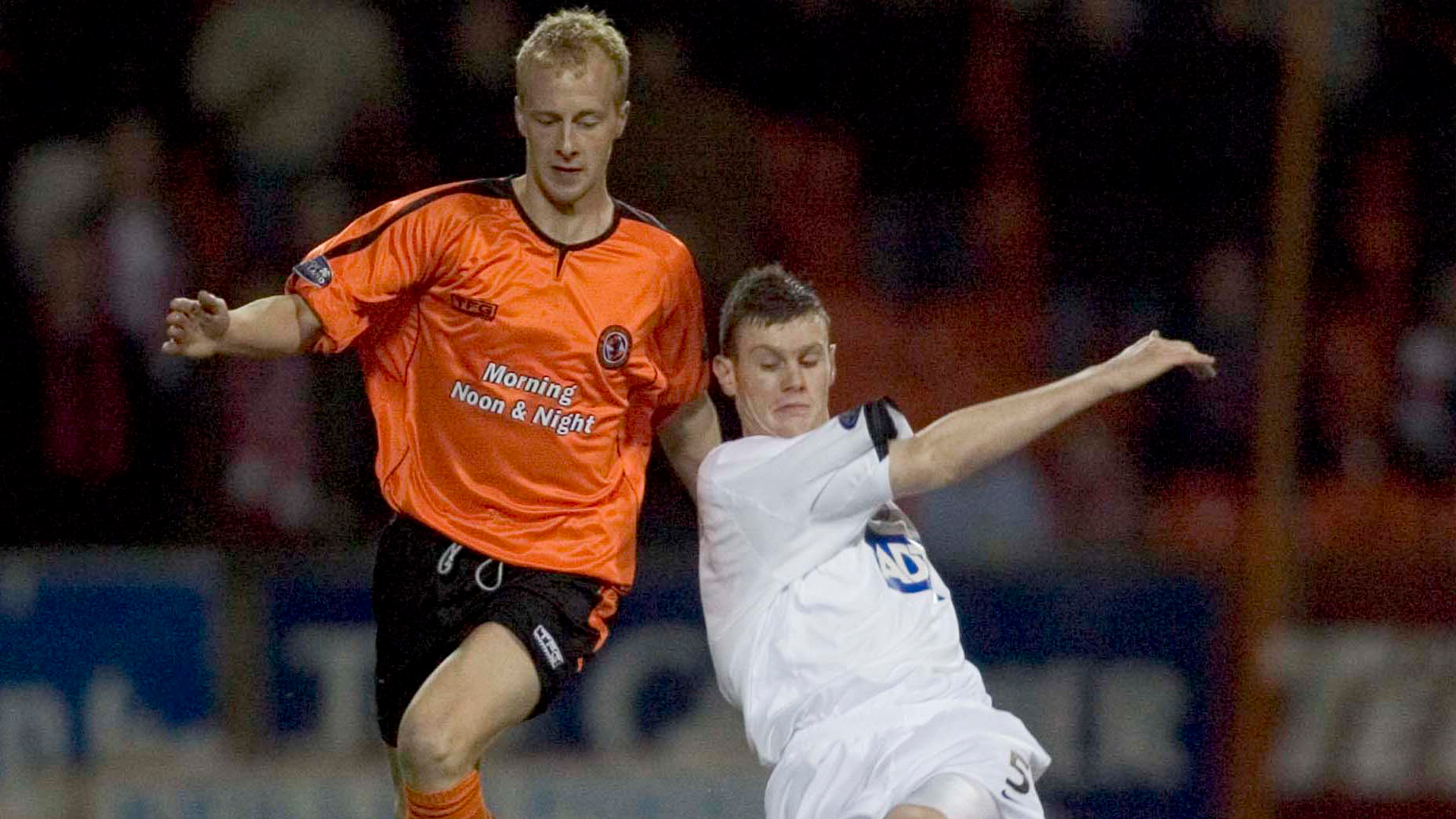 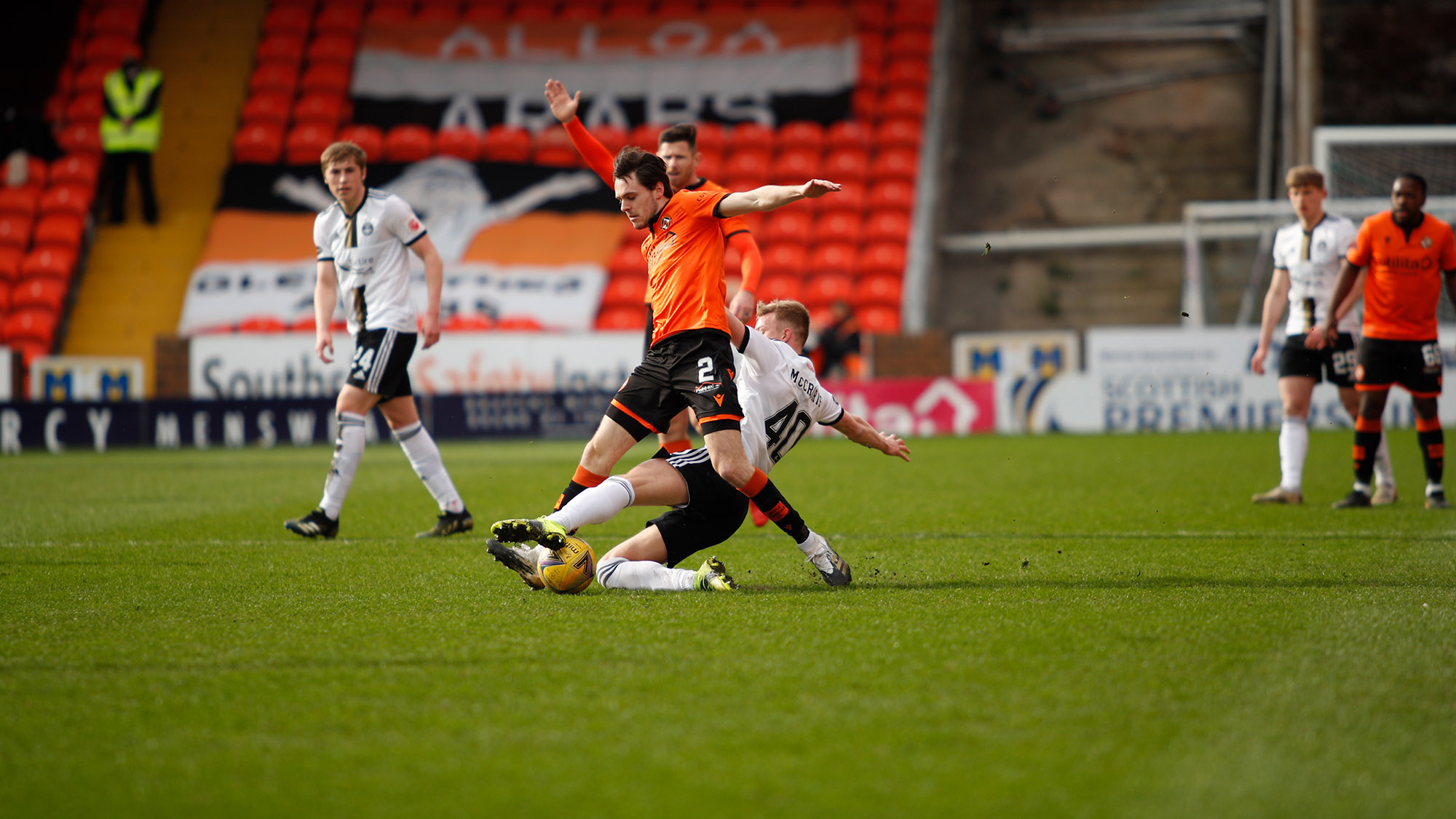 It was a familiar story for the Dons, plenty of good approach play, particularly in the first half, coming to nothing as they failed to score and slipped to defeat at Tannadice.

There were three changes for the Dons, Connor McLennan and Dean Campbell back in the side while Jack MacKenzie got his first start for the club. They replaced Callum Hendry, Dylan McGeouch and Niall McGinn who all dropped to the bench, where they were joined by the returning Fraser Hornby. Calvin Ramsay was also on the bench as Shay Logan and Michael Ruth dropped out of the matchday squad.

There was one change for Dundee United from the side that drew 0-0 with Celtic a fortnight ago, Adrian Sporle replacing Nicky Clark who dropped to the bench.

Openings were at a premium in a competitive opening, the hosts winning the first opportunity by way of a free-kick in the sixth minute. Harkes played it in, the ball half cleared to Edwards who got a clean strike on the ball, the massed ranks of Dons defenders getting a block on it.

Aberdeen were inches away in the eighth minute. Jonny Hayes made a driving run forward after collecting a loose ball on halfway, before feeding McLennan. His pull back across the box reached Campbell some 16 yards out. His shot looked miscued, but it cannoned into Edwards and spun away from the goalkeeper, clipping the post and going behind. From the corner, the ball came back out to Campbell wide on the left and his cross was tipped over by a scrambling Siegrist.

A heavy touch from Reynolds in the centre circle on 20 minutes gave the ball away to Kamberi. He fed Campbell and his low drive from 25 yards was well saved by Siegrist down to his right.

A minute later, a neat interchange between Fuchs and McNulty got Fuchs into the box but under pressure, he flashed his shot well over the bar from 10 yards out. The Dons were then on the break, Ash Taylor finding Hayes with a fine cross-field pass, Hayes’ shot from the edge of the box deflected wide by a defender. The pace of Hayes and McLennan was certainly worrying Dundee United on the break but once again, that telling final touch was missing.

Aberdeen got away with one in the 38th minute, a poor clearance from Joe Lewis giving United a chance, the ball worked into Shankland on the edge of the box. He tried to chip the goalkeeper but it was a weak effort, Taylor having plenty of time to get back on the goal-line and protect the Dons’ goal.

Two minutes from the break, Lewis Ferguson went down under a challenge from Butcher. There was contact, if not enough to warrant a spot kick, but Ferguson was harshly done by in receiving a yellow card for simulation in the last real action of the half.

Aberdeen manufactured the first chance of the second half, Hoban heading well over from McLennan’s right wing corner in the 50th minute. A minute later, Campbell made a darting run to the by-line before pulling the ball back, only for a United defender to be first to the ball to turn it behind.

United were on the attack in the 56th minute thanks to a great ball forward from Siegrist but after good play between Sporle and McNulty, fortunately the final ball to Shankland wasn’t accurate enough and the chance was gone. Two minutes later, Shankland was in, but Taylor did well to get a block on the shot.

It was the hosts who found the opening goal on 62 minutes, good persistence down their right from Fuchs to dispossess MacKenzie before combining with Shankland and then then getting the ball on to Harkes. Played into Shankland, he rolled a pass back to Sporle to finish crisply across Lewis from around the penalty spot.

Aberdeen made their first change on 75 minutes, McGinn replacing McLennan as the visitors chased an equaliser, Dundee United happy to it sit in on their lead and to look for a quick break.

Ten minutes from time, there was a good opportunity for Aberdeen, a free-kick won 35 yards out, just to the left of centre, but sadly the set piece came to nothing as confidence in front of goal remained at a premium. The hosts then swapped Sporle for Appéré in the 83rd minute, Aberdeen responding by bringing on Hendry, Hornby and Kennedy in the 87th minute in place of Campbell, Kamberi and Hayes.

A chance came Ross McCrorie’s way in the 90th minute, Hoban getting a cross in but the midfielder got under his header and put it over the bar from a dozen yards out. Clark came on for Butcher for the hosts, while Ramsay made his Aberdeen debut in the 91st minute too, replacing Hoban.

The referee only added on two minutes of added time, Kennedy won a late corner in the 92nd minute, McGinn delivering but unable to beat Shankland at the near post, the last opportunity of the day going begging.