Aberdeen’s unbeaten run came to an end this afternoon in Inverness. The home side dominated the first half as the Dons struggled to cope with Ryan Christie’s movement. He set up the first and scored a brilliant second. Had it not been for Danny Ward who made two superb saves the game could have been over at half-time.  As it was Ash Taylor scored with a header from a corner and it was game on. In the second half the Dons were a lot better and enjoyed the majority of the possession but failed to find a way through. Fon Williams touched a peter Pawlett free kick onto the post, a David Goodwillie cross onto the bar and Goodwillie missed an opening in the final minutes. 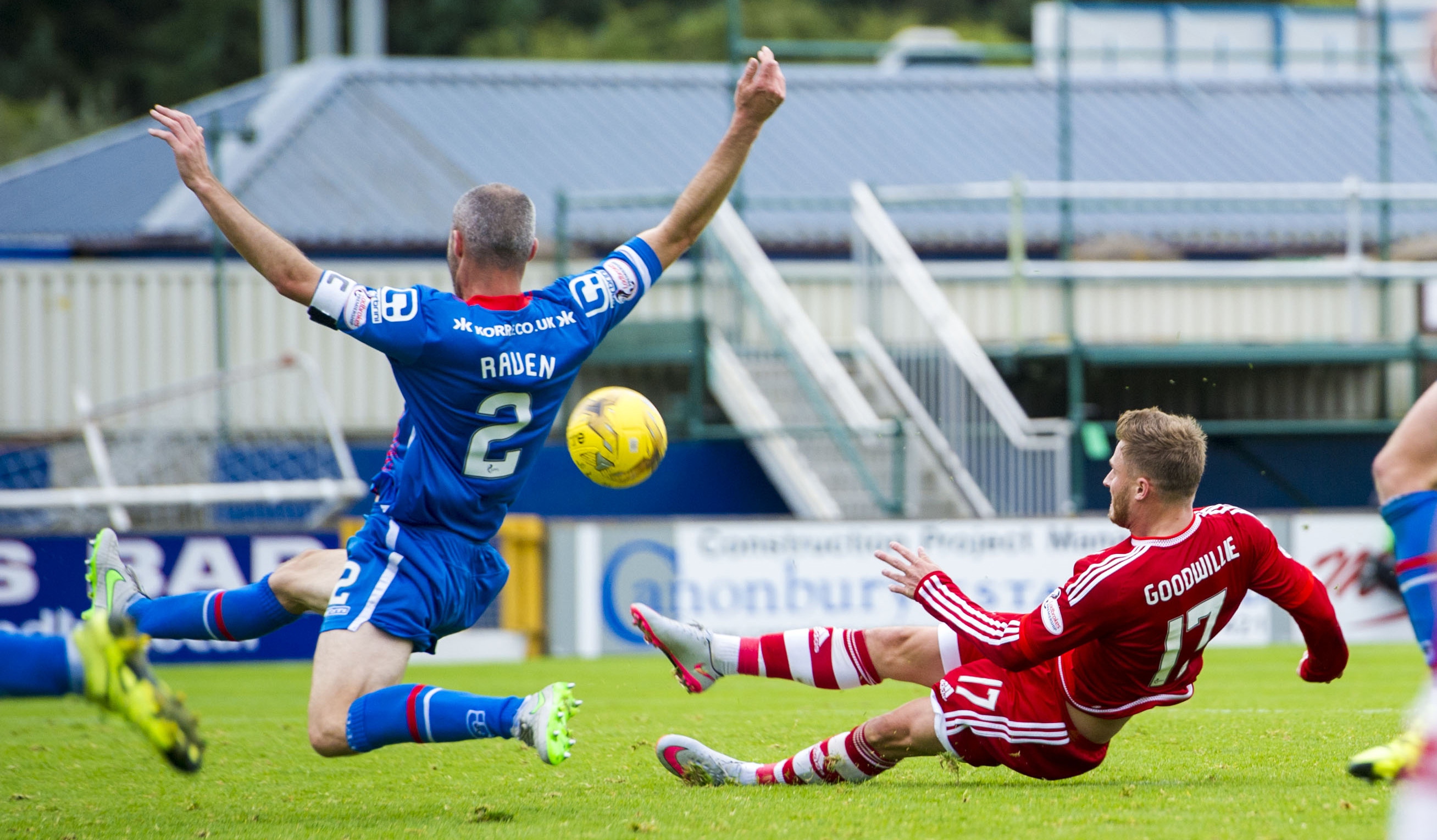 Aberdeen’s unbeaten run came to an end this afternoon in Inverness. The home side dominated the first half as the Dons struggled to cope with Ryan Christie’s movement. He set up the first and scored a brilliant second. Had it not been for Danny Ward who made two superb saves the game could have been over at half-time.  As it was Ash Taylor scored with a header from a corner and it was game on. In the second half the Dons were a lot better and enjoyed the majority of the possession but failed to find a way through. Fon Williams touched a peter Pawlett free kick onto the post, a David Goodwillie cross onto the bar and Goodwillie missed an opening in the final minutes.

Derek McInnes brought Paul Quinn back into the side for the game at Inverness this afternoon. Greame Shinnie recovered from his injury and Josh Parker was given a first start. So in a 4-2-3-1 formation the Dons lined up with Ward in goal, a back four of Logan, Taylor, Quinn and Considine. Jack and Shinnie sat in the middle with McGinn, McLean and Hayes ahead of them. Parker was the lone striker.

On 4 minutes Kenny McLean tried his luck from about 25 yards out. His left footed effort was heading for the corner and in the end Fon Williams made a decent save, especially as the ball bounced up just in front of him as he dived. That led to the first corner but the Dons pre planned routine did not go to plan, so much so the home side almost caught them on the break.

After 9 minutes the home side took the lead. Out of nothing Ryan Christie turned Shinnie in the middle of the park and played an early ball wide to Miles Storey. The Inverness striker took one touch before despatching the ball across Ward into the corner of the net. A very good finish.

Inverness very nearly made it two on the quarter hour mark. Christie again caused the problems and his threaded through ball found the run of Draper and it took a superb last ditch tackle from Paul Quinn to save the day. Then a few minutes later Inverness hit the Dons on the break again, Storey played it back to Liam Polworth and it took an outstanding save from Danny Ward at full stretch to tip the ball wide.

Christie was playing just off the main striker and was picking the ball up in some very good areas. The Dons were struggling to deal with his movement. 20 minutes in, the home side were now knocking the ball about with the lot of confidence. A good move saw the ball played wide to full back Raven. He had space and time but his cross sailed over the bar.

The Dons at this point were really struggling to get a foot hold in the game. It was all one way traffic.

On 28 minutes Aberdeen finally put a move together. Shinnie did well to beat his man on the edge of the area but his shot was well off target. Then on the half hour mark Inverness grabbed a second. Ryan Christie again picked the ball up in a good area with no one near him. This time he elected to shot and his effort flew over Ward into the net. A superb finish.

On 35 minutes, Aberdeen were given a life line. From a corner McGinn played the ball in and Ash Taylor rose completely unchallenged to head the ball down and into the net from six yards out. Ash showed good determination to win the header but the home defence will wonder why he was unmarked. A couple of minutes later another corner caused real problems for the home side and Paul Quinn was not far away this time from getting a touch. Then a long diagonal free kick was aimed towards Considine. He nodded it down to McGinn who was in acres of space but his first time effort was well off target. Niall had more time than he realised.

On 42 minutes Danny Ward produced another outstanding save. The Dons failed to clear a corner. When the ball came back in Taylor jumped too early which allowed Christie coming in behind him to head the ball down and the ball appeared to be heading into the corner of the net until Ward somehow, from a stationary position, managed to claw the ball round the post

On 43 minutes Niall McGinn limped off and was replaced by Adam Rooney. At half time Peter Pawlett replaced Paul Quinn and Graeme Shinnie moved to left back.

The opening to second half was caggy. On 51 minutes Pawlett was fouled right at the edge of the area. McLean took the free kick but drove it into the wall. Rooney then almost set Pawlett free on the break and then Hayes picked the ball up wide on the left but his cross sailed over. Parker then burst through two tackles but his shot was wayward. The Dons though were for the first time in the afternoon enjoying some possession and a bit of control.

On 57 minutes Jack was booked for a foul on Christie, who whose movement was still causing the Dons problems.

On the hour mark Shinnie picked the ball up in a promising position. His early ball tried to find the run of Hayes but his pass was just a little too strong. Pawlett then played in a free kick but his cross was frustratingly too close to Williams and then Hayes burst into the box, the ball bounced about before going behind for a goal kick.

On 65 minutes Christie picked up a yellow card for a trip on Shinnie who was taking a bit of treatment from his former team mates. Josh Parker was then replaced by David Goodwillie.
It was all Aberdeen now as they forced a number of corners and free kicks but the Dons could not create any clear cut openings.

With just over 15 minutes to go Matombo, who played against the Aberdeen U20s on Thursday, replaced Polworth. Taylor was given a yellow card for a foul on Christie. From the resulting free kick the Dons defence did not look convincing but managed to clear the danger.  Pawlett and Hayes then broke but Jonny’s ball was claimed by Fon Williams. Then Hayes won Aberdeen a corner. Rooney got to the ball ahead of the keeper but his header went harmlessly over.

With ten minutes to go Aberdeen came agonisingly close to an equaliser when they won a free kick 25 yards out. Pawlett took it right footed, curled it round the wall but the ball rebounded off the post and away to safety. On second viewing the Inverness keeper looked to have got a touch, if he did it was a very good save. With three minutes to go Goodwillie chipped over a cross which the keeper did very well to touch onto the bar and out for a corner.

In the closing stages Taylor went upfront as the Dons went for it. In the 90th minute Christie was sent off for a second yellow card. Considine then had a chance but curled his effort wide and then Pawlett set up Goodwillie who just had the keeper to beat but he delayed his shot slightly which allowed the defender the chance to get back block his effort.

Three minutes of injury time became about five as Inverness were penalised for time wasting but try as they might the Dons could not get the break of the ball inside the area.