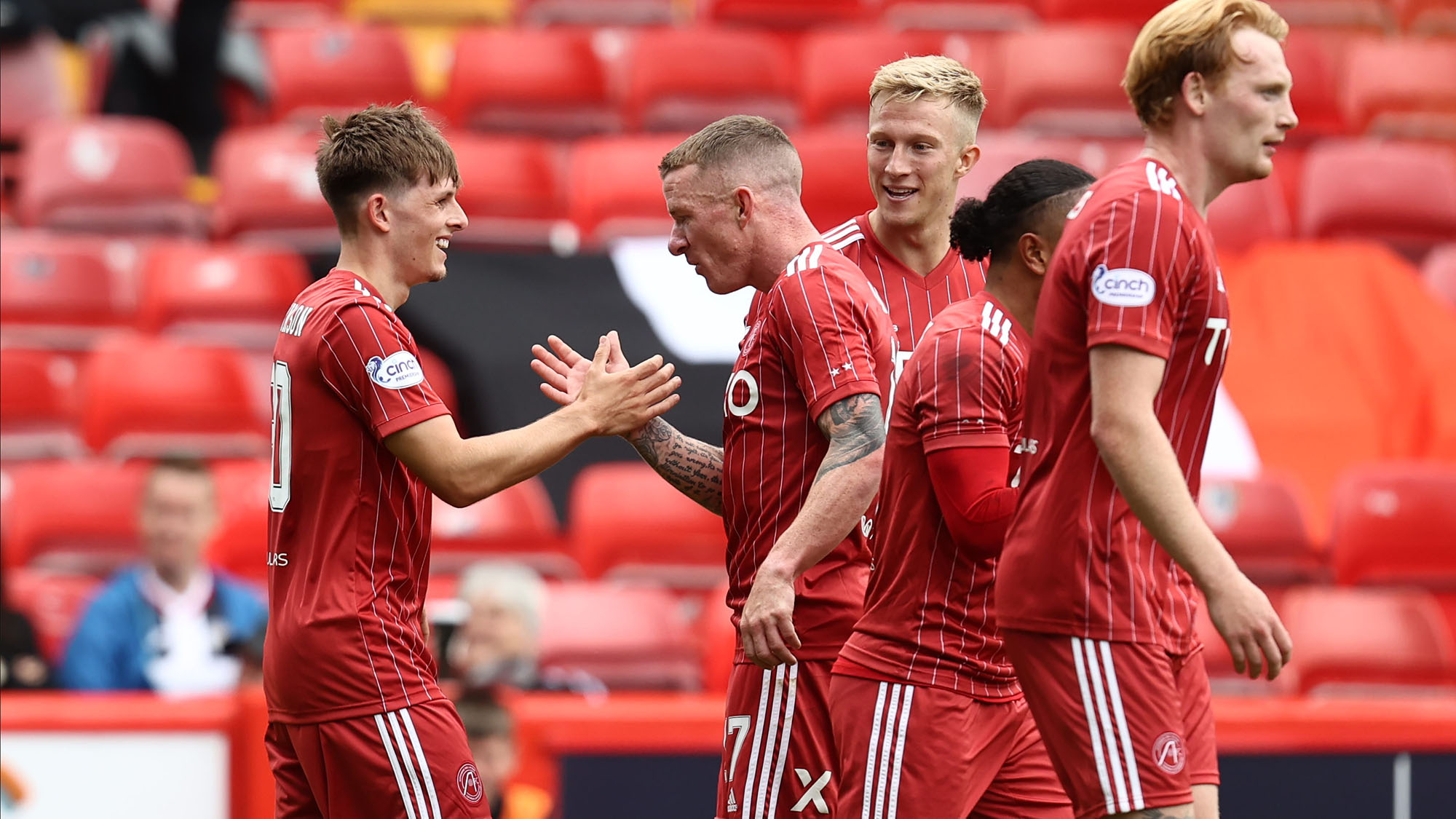 We return to Pittodrie on Saturday as we take on Motherwell in our third cinch Premiership game of the season. The Dons will be looking to build on last weekend’s 4-1 victory over St Mirren where a double from Bojan Miovski and first Aberdeen goals for Leighton Clarkson and Duk gave us the victory.

“Every team brings with its own different challenges and the Motherwell test will be a completely different one of the St Mirren test and we just have to rise to the occasion. We have to try and play our game and impose our style on the opposition and ultimately we have to go and find a way to win the game.” – Jim Goodwin previews Saturday’s game with Motherwell.

Motherwell go into the game having won one and lost one in their opening cinch Premiership matches. The Fir Park side, who have appointed former defender and club legend Steven Hammell as their new manager following the departure of Graham Alexander, won their opening game against St Mirren, but lost out to St Johnstone last week with former Don Stevie May scoring the winner in the 94th minute of injury time for the Perth side.

Shayden Morris is in contention for a space in the matchday squad and may make his Aberdeen debut on Saturday after completing his move from Fleetwood Town. Jack MacKenzie is also in consideration for a space in the squad after coming through Thursday’s training session. Hayden Coulson’s injury is not as bad as first feared and could return to training next week. Unfortunately Callum Roberts will be out for around eight to 10 weeks after going off with a hamstring injury against St Mirren. Connor Barron also remains out. 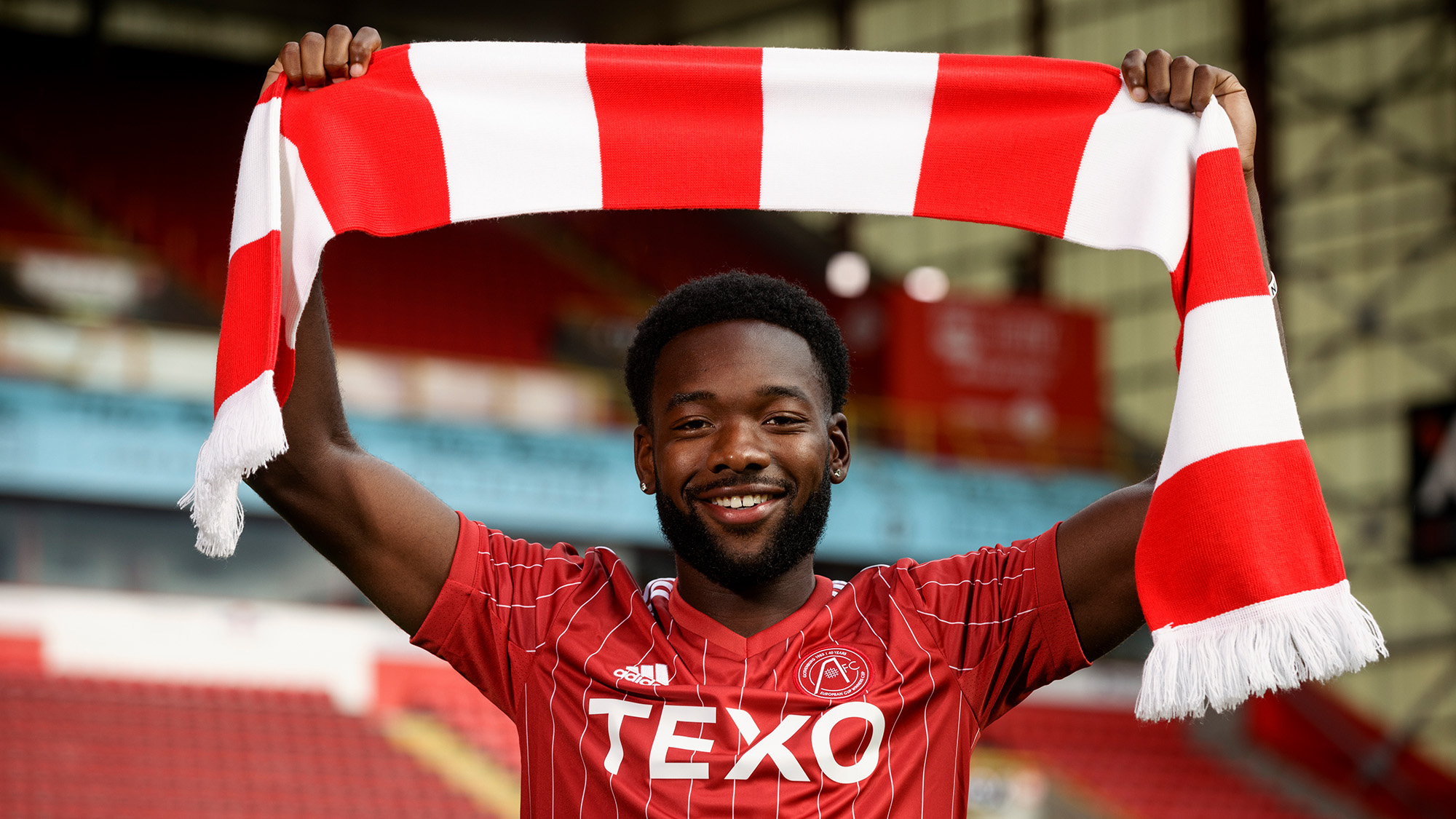 Last five games between the sides at Pittodrie:

Our latest edition of Red Matchday features an exclusive interview with Jonny Hayes as he closes in on 300 appearances for The Dons. This weeks edition also features a Q&A with Duk and has the latest set of Red Matchday stickers. The programme will be avaliable to purchase from around the ground and the club shop. .For full details and to order your programme online, please click here. 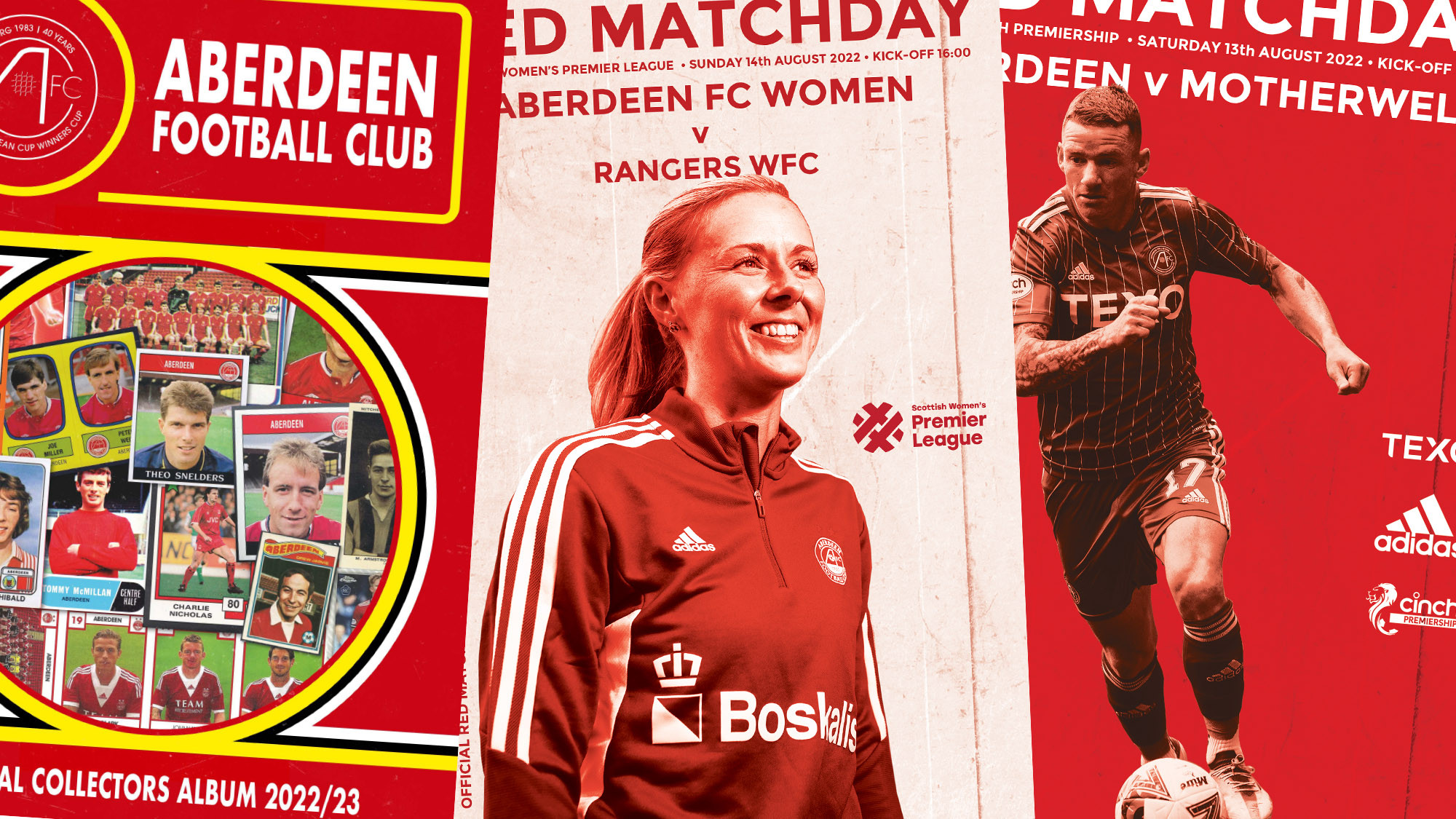 Live video coverage for RedTV International subscribers with an audio feed of the programme available in GB & Ireland. Coverage begins at 2.45pm (BST). We’ll have reaction post-match, a full match replay from 10pm & highlights will be available from midnight. 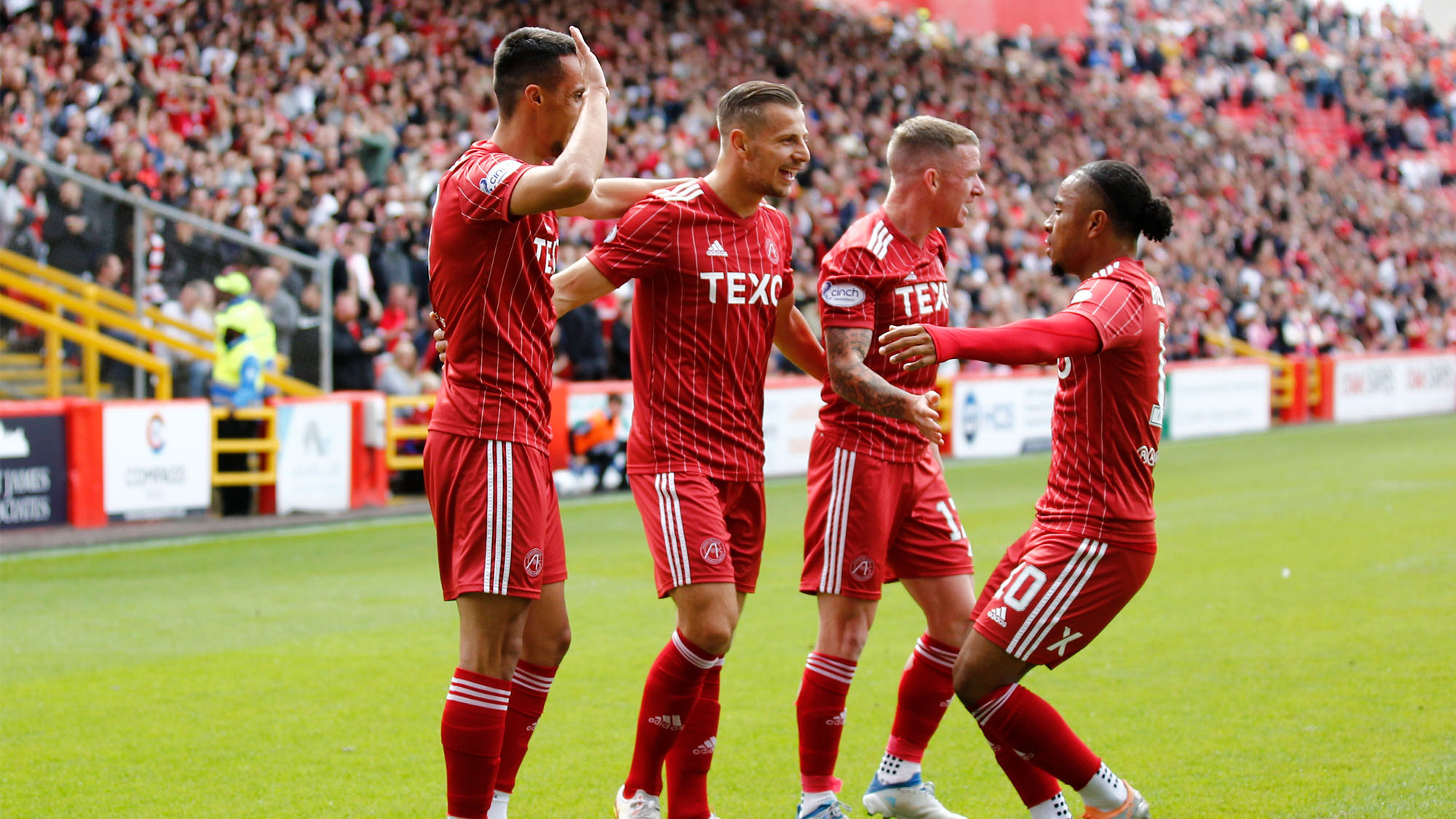 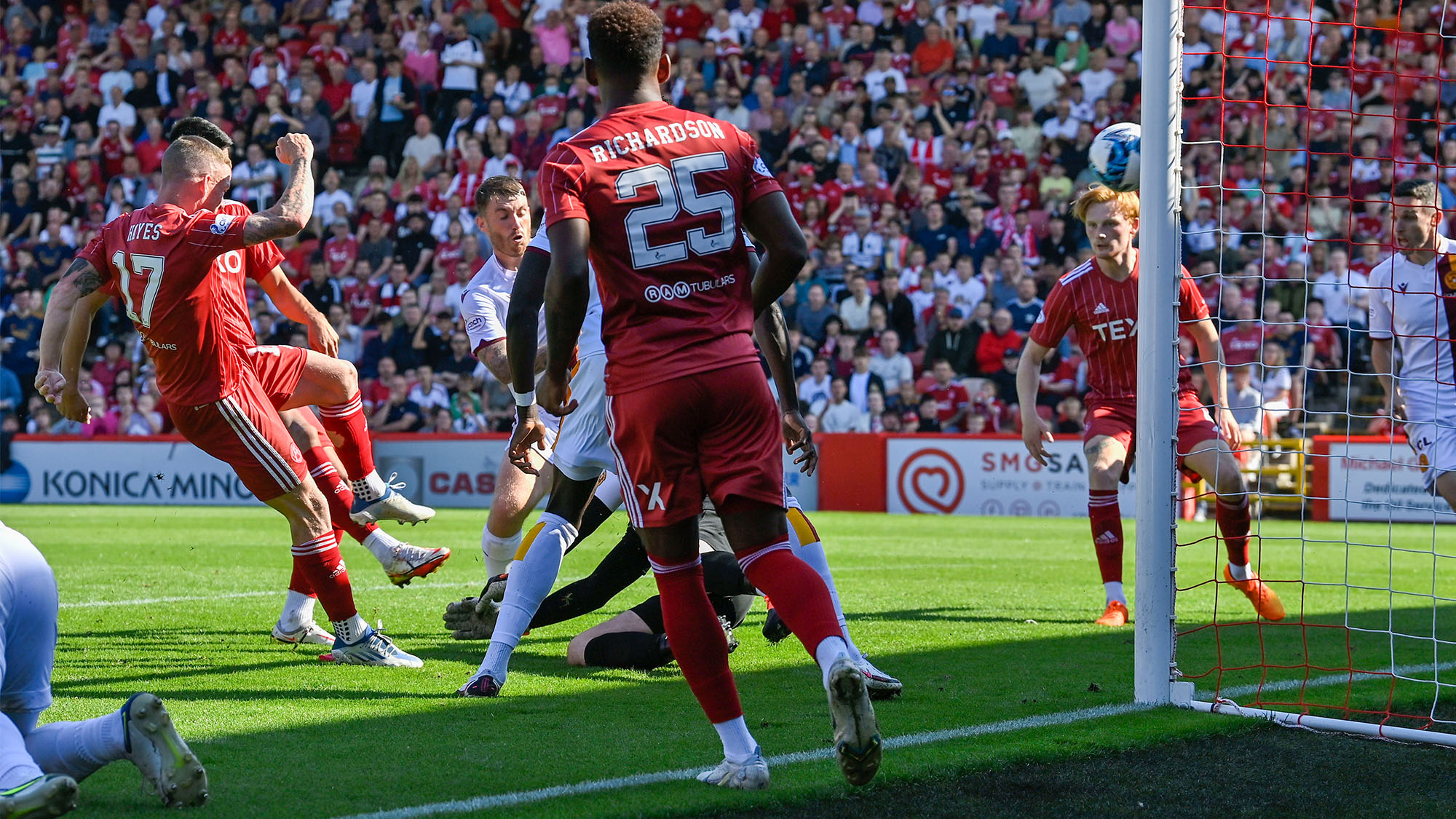 Aberdeen couldn’t touch the heights of the previous Saturday as a disjointed performance against Motherwell saw the opposition deservedly take all three points at Pittodrie.

Jim Goodwin made just the one change it the Aberdeen side that brushed aside St Mirren last Saturday, Leighton Clarkson getting his first start for the Dons in place of Hayden Coulson. On the bench, Shayden Morris got his first taste of the matchday squad, with Jack MacKenzie also returning from injury.

Having been permanently installed as Motherwell boss on Thursday, Steven Hammell made two changes to the side beaten 2-1 at home by St Johnstone last weekend. Callum Slattery and Dean Cornelius came into the team, Barry Maguire and Joshua Morris missing out, both starting from the bench.

Motherwell had the first look at goal on four minutes, a nice move down their left, Cornelius rolling the ball back to Goss on the edge of the box. His effort was heading for the far top corner but Kelle Roos was across smartly to tip the ball over. Not unlike the St Mirren game, Aberdeen were just a little untidy in possession early on, Ross McCrorie having to head a van Veen shot behind after Ylber Ramadani gave the ball away cheaply.

The Dons should have been ahead on 11 though. Solholm Johansen slipped as he looked to receive a Mugabi pass, allowing Bojan Miovski to pinch the ball off him just inside his own half. He advanced into the box, defenders trailing in his wake, but as he tried to chip the goalkeeper, he got too far under the ball and it ended up on the roof of the net.

Jonny Hayes had to produce a vital sliding tackle four minutes later, taking the ball off van Veen’s toe as he looked to shoot. From the resulting corner, Solholm Johansen got free but fortunately glanced his header wide of the target from eight yards out.

Miovski was lurking again on 16 minutes. From the centre circle, Vicente Besuijen played an inviting ball over the top, Miovski chasing it down. Kelly was brave to come off his line and stand his ground to collect the ball just in front of the number nine.

Motherwell were in front on 20 minutes and perhaps deservedly so on the early play. Shields went on the chase after a long ball down their right before slinging in a low cross into the six-yard box from the by-line. Jayden Richardson lost his footing as he came across goal to clear, giving Spittal the opportunity to get in front and tuck a shot just inside the post for 1-0.

On 26, Matty Kennedy ballooned a free-kick over the bar from 30 yards and immediately clutched the back of his left leg. Moments later he went down for treatment and was replaced by debutant Morris.

More Motherwell pressure after 33 minutes culminated in a snapshot from Goss on the edge of the box, Ramadani rushing out to get a crucial deflection on it that took the ball wide. A minute later, Slattery flew into a challenge on Richardson and collected a yellow card.

From nowhere, Aberdeen were level on 42 minutes, an emphatic header from Miovski. Liam Scales out on the far left played in an inviting cross and Miovski got in between the two centre-halves, hung in the air and then pounded a header across goal and into the far corner, a super finish for his fourth goal of the season.

A good break from Aberdeen as we went into the last minute of the half had Motherwell on the backfoot, the move ending in Morris pulling a shot wide of goal from 25 yards out.

It was a perfect state to the second half with the Dons grabbing the lead after 85 seconds. Morris and Richardson bundled their way into the box down the right before Richardson pulled the ball back from the by-line, Kelly parrying it to Hayes. Hayes’ first shot was saved by the keeper but he readjusted his feet quickly and from five yards out, he crashed his second effort into the roof of the net.

The lead didn’t last long though. A Motherwell corner from Goss on their right sailed unmolested all the way through to the back post where Slattery was standing on his own to tap in from two yards out.

The Dons were behind on 55 minutes, van Veen with the goal. A long ball forward from Kelly was neatly helped on by Spittal across the face of the box, allowing him to make a run for the return ball and get beyond the defence too easily. His shot smacked against the bar, van Veen following up to nod into the empty net.

Aberdeen responded, a lovely ball in from Morris turned behind by McGinn at the back post. Sadly, the corner came to nothing. Motherwell made their first change on 62 minutes, Spittal replaced by Efford.

Clarkson went looking for a repeat of his St Mirren heroics on 64 minutes, stretching to catch a shot from 25 yards out but it went well over. He crumpled to the turf and required treatment but he could not continue. MacKenzie replaced him on 67 minutes, McCrorie going into midfield, Scales back to centre-half.

With 16 minutes to go, there was a triple substitution from the visitors. Morris, Maguire and Tierney joined the game as Shields, Slattery and Cornelius made way. Aberdeen responded by bringing on Duk for Hayes.

Van Veen was in on goal on 78 minutes after a long clearance from Kelly was played into his path, but he hesitated for a fraction, allowing Roos to get off his line and smother the shot as Aberdeen continued to live dangerously.

Good approach play from Scales and MacKenzie opened up Motherwell on 83 minutes, but MacKenzie’s cross was a shade too high for Richardson who couldn’t get over his volley and fired over the bar.

Efford was on the break a minute later, collecting a pass from van Veen and darting into the penalty area, Anthony Stewart doing well to get a block on his shot as Motherwell looked to seal the game. Morris was then booked for time wasting. Another chance came on 86 minutes, Efford pulling the ball back into the box. Stewart couldn’t clear, leaving Tierney to stab the ball goalwards from six yards, Roos getting a foot to it to turn the ball behind.

Besuijen’s corner gave Aberdeen hope on 89 minutes, but Scales couldn’t get over the ball and put his header into the Red Shed. Duk was on the run a minute later, Solholm Johansen doing well to nick the ball behind. Besuijen’s corner was half cleared, Ramadani blazing over the bar as he picked up the pieces on the edge of the box.

Six minutes were added on, the Dons forcing a corner with two minutes left, Roos racing upfield to join in. It was a good ball in from Besuijen, McCrorie’s header deflected over. Motherwell broke from the second, MacKenzie the last man, able to head clear as van Veen looked set to score. It ended in a Motherwell corner, the ball not leaving that section of the pitch before the whistle went.