“It has not been ideal preparation ahead of the game. I think it is unnecessary to have it changed so late in the day in terms of the supporters. We should not take our supporters for granted. Myself and the players certainly don’t do that. I think the change so late could have been avoided. I think we can all learn from the incident. Why schedule an SPFL game on a Monday night for TV on an international week? Also if the new date was so readily available why were we not given that option as well? 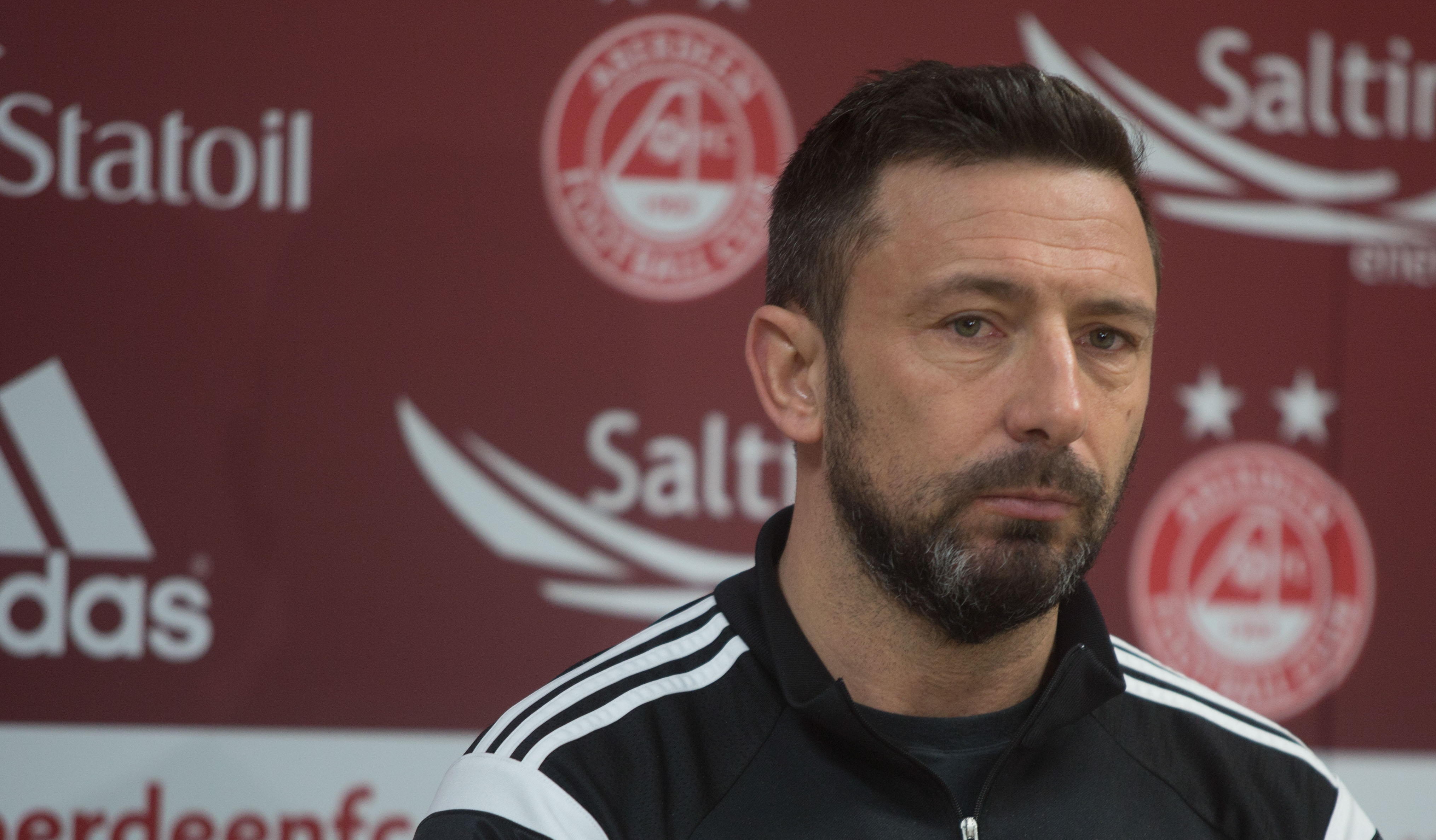 “It has not been ideal preparation ahead of the game. I think it is unnecessary to have it changed so late in the day in terms of the supporters. We should not take our supporters for granted. Myself and the players certainly don’t do that. I think the change so late could have been avoided. I think we can all learn from the incident. Why schedule an SPFL game on a Monday night for TV on an international week? Also if the new date was so readily available why were we not given that option as well?

“I think it is good it is the Saturday, I think the majority of supporters would prefer the Saturday but they should have known a few weeks ago.

“We have to deal with it.

“The message now to my players and the supporters is now to look forward to the game. It is not about dwelling on the fixture change.

“Dundee have always given us good games. They have beaten us in the cup and we drew the last league game at Pittodrie. They have always caused us problems and have an attacking threat. Ironically our best performance against them was the game we lost. Probably our worst performance against them was the game we won.  They are a tough opponent and they have good players. Paul has assembled a very good squad.

“It is important to impose yourself in any game. We did it the hard way against Motherwell but found a way to get the job done. We were not good enough defensively but we also did not get into any flow or rhythm to cause them enough problems. You have to give Motherwell a lot of credit but I expected more from my team. We had far more aggression in the second half and had more purpose about us. It is that level of performance and attitude to our work that will help us get points.

“In recent years we have tried to be strong at all levels at the club. At U20 level it is not always about winning the league, it is about developing players. If you can be successful at the same time it is a bonus. We have had some good performances and performers in the 20s side this season. To have both teams up at the right end of the table is pleasing. To have young players trying to grab your attention is pleasing but that is the way it should be at a proper club.

“We have three players who are in doubt for the weekend. Willo Flood, Jonny Hayes and Peter Pawlett. We hope all three will train tomorrow and if all three train and come through ok they will be available. The game being brought forward a couple of days could go against them.”

REDTV | Shay Logan and Willo Flood will meet the media on Thursday ahead of the game and you'll be able to see the interviews on REDTV from Thursday evening.

Dundee hit back to claim a point 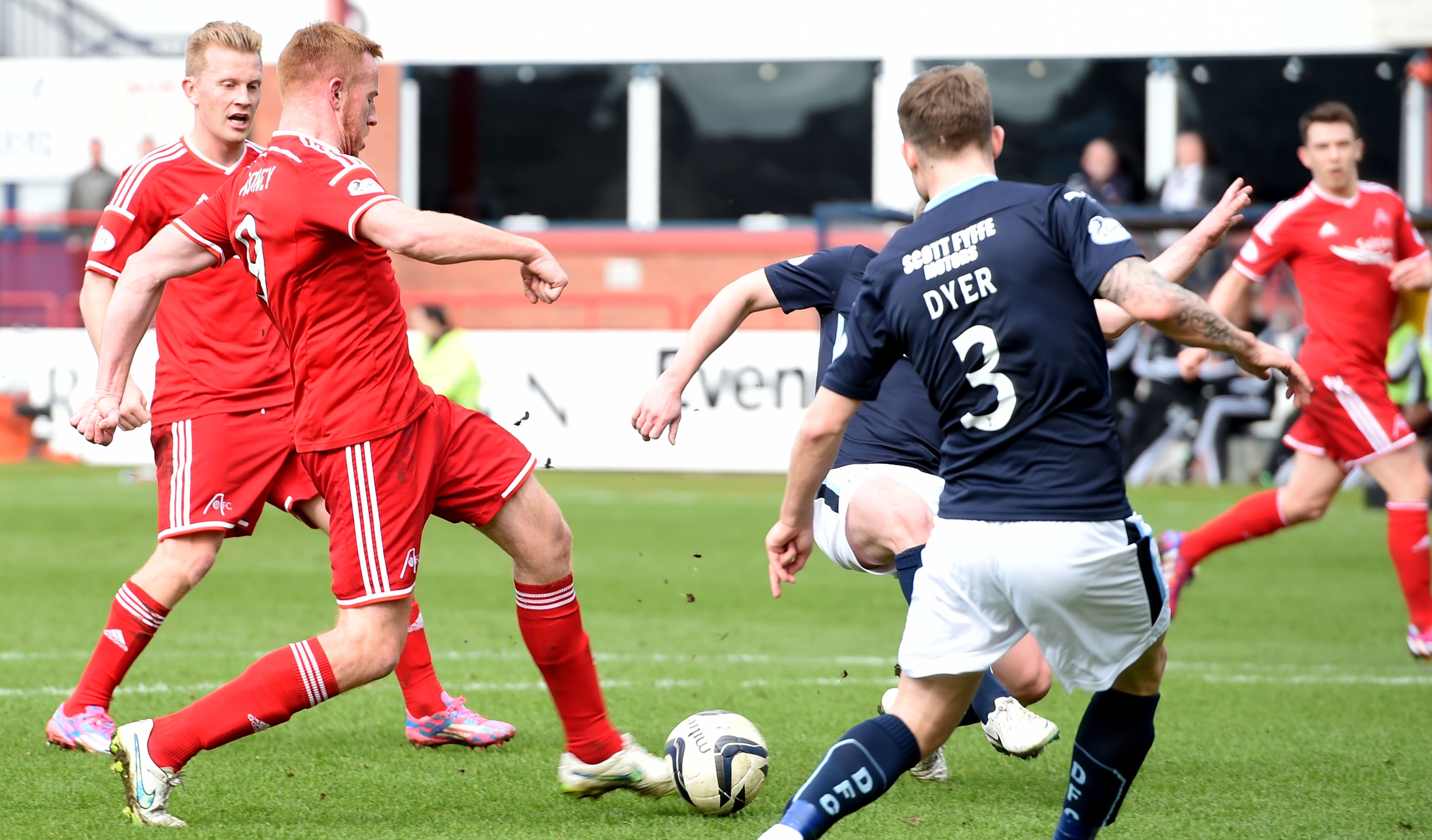 Aberdeen this afternoon threw away two points with a poor performance against Dundee at Dens. The Dons started the first half well and deservedly took the lead when debutant Andrew Driver set up Adam Rooney who produced a brilliant finish to score goal number 25 of the season. Scott Bain once again came back to haunt the Dons with another decent performance – he produced a good save from Rooney at the start of the second half and one from McGinn late on. Although the game had become very scrappy with little tempo or quality from either team, The Dons looked comfortable until the 70th minute when a mistake from Jack allowed Harris to cross for Stephen McGinn to score. The visitors pushed hard for a winner late on but in truth never looked like scoring.

Derek McInnes made two changes to the side that beat Motherwell eight days ago. Willo Flood came back into the starting XI and Andrew Driver was given his debut after impressing for the U20s in midweek. Dundee, who had not had a game for three weeks, had a few injuries but still fielded a strong looking line up with top scorer Greg Stewart on the bench.

The Aberdeen formation saw Langfield in goal, Considine at left back & Logan was at right back with Taylor and Reynolds in central defence. Flood and Jack were the sitting midfielders with Driver wide left, McGinn wide right and McLean playing the role in behind Rooney.

The Dons forced the first corner of the afternoon in the second minute. McGinn’s ball in was attacked well by Considine but McPake made a good defensive header to clear the initial danger. McGinn received the ball again and did well to beat his man on the left and will have been disappointed to see his cross sail behind. On 5 minutes Flood was fouled in a promising area. McLean’s ball in was not the best. Considine’s ball in then was slightly better but still no chances. The Dons have had success against Dundee this season with crosses into the box but their delivery needed to be better.  On 9 minutes Flood did put over a better cross but Considine was penalised for a push.

A bright start from Aberdeen and they were knocking the ball about well, enjoying all the possession.

On 11 minutes a little bit of space opened up for Rooney but his shot was well blocked by Konrad. That led to corner number two and although the Dundee defence looked less certain with this one they did eventually clear their lines. Corner number three arrived on 14 minutes after good play by Driver and Considine down the left but a short corner routine did not come off.

It was a strange first quarter of an hour as Dundee were offering little going forward. In fairness though they were defending well.

The home side won their first corner on 18 minutes. Alex Harris made a late run into the box and was not far away from getting a touch. The visitors then won another corner, a better ball in this time from McGinn but Rooney with his back to goal could not direct his header on target.

On 21 minutes a ball over the top put McGowan in the clear. Jamie Langfield did really well though to judge the bouncing ball and to get out early and prevent any shot. Dundee were unhappy with the challenge but nothing was rightly given. From the resulting corner Konrad had a free header but he could not get enough power onto it. Probably the best chance of the game so far.

In the 27th minute an even better chance for the home side when a good move allowed Stephen McGinn room for a shot and his low effort looked to be creeping into the corner when it went past Langfield but thankfully the ball just went past the post.

The game had become very scrappy and there was little pattern to it.

The dry pitch was not letting the Dons move the ball about at any pace. Aberdeen needed some inspiration from someone and they got in the 35th minute from new boy Andrew Driver. He showed great feet to beat his man at the edge of the area before his neat through ball found Adam Rooney who hammered it into the roof of the net. A great finish from Adam, number 25 for the season.

The goal lifted Aberdeen and they forced a couple of corners after some good pressure. On 43 minutes great direct play by McLean then Jack, who dribbled the ball round a couple of defenders, as he weaved his way into the box. The ball then sat up nicely for McGinn and his shot appeared to be heading into the net but was blocked by the arm of Dyer. It looked a clear handball at the time, his arm was up.  The reaction of the Aberdeen players told you all you needed to know. They were absolutely livid. As well as a penalty it would almost certainly have been a red card, but referee Craig Thomson waved play on.

Before half time the Dons forced another couple of corners.

On 47 minutes Scott Bain produced a decent save. A mix up between Thomson and Harris gave Logan time to swing in a ball. A glancing Rooney header appeared to heading into the far corner but Bain flung himself to his right to make the stop. Great reactions from the keeper as he could not move his feet and set himself until very late. On 55 minutes good defending from Driver as he had to track the run of Stephen McGinn. For a second he was the last man but Andrew showed good composure to hold up McGinn which allowed Reynolds to come over and make the tackle.

Similar to the first half, the second started with Aberdeen enjoying plenty of possession before the contest became very scrappy again. Both teams were guilty of giving away the ball cheaply.

On 57 minutes Dyer finally found his way into the referee’s book after a foul on Flood.  On the hour mark a major let off for the Dons. A good ball in by McGinn was not dealt with by the Dons defence. Harris flicked it on to Clarkson who hooked the ball past Langfield but the ball went inches wide.

After 65 minutes both managers made a change. Simon Ferry was replaced by Greg Stewart and then Peter Pawlett came on for Andrew Driver who could be very pleased with his debut.

Then disaster for the Dons. Dundee equalised after 68 minutes. Shay Logan first of all did well to prevent a corner. Ryan Jack then also tried to keep the ball in play but only succeeded in presenting the ball to Harris. He whipped in a ball to the near post and McGinn flicked it in past Langfield. A really poor goal to lose.

With fifteen minutes to go this was going to be a real test of character for the Dons. On 76 minutes Considine swung in a good ball from the left, McGinn nodded it on and Bain just managed to touch the ball around the post with Rooney not far away. Another good piece of goalkeeping. With seven minutes remaining youngster Wighton came on for Harris. Aberdeen then brought on Shankland for McGinn.

Aberdeen pushed hard for a winner but in truth never looked like troubling Bain. The keeper did well to come and claim any high balls into the box.