Derek McInnes made two changes to the side that drew 1-1 last week in Scotland. Jayden Stockley was free to play after suspension and Greg Stewart started after impressing in the first leg as a sub. Tansey and Rooney dropped to the bench. 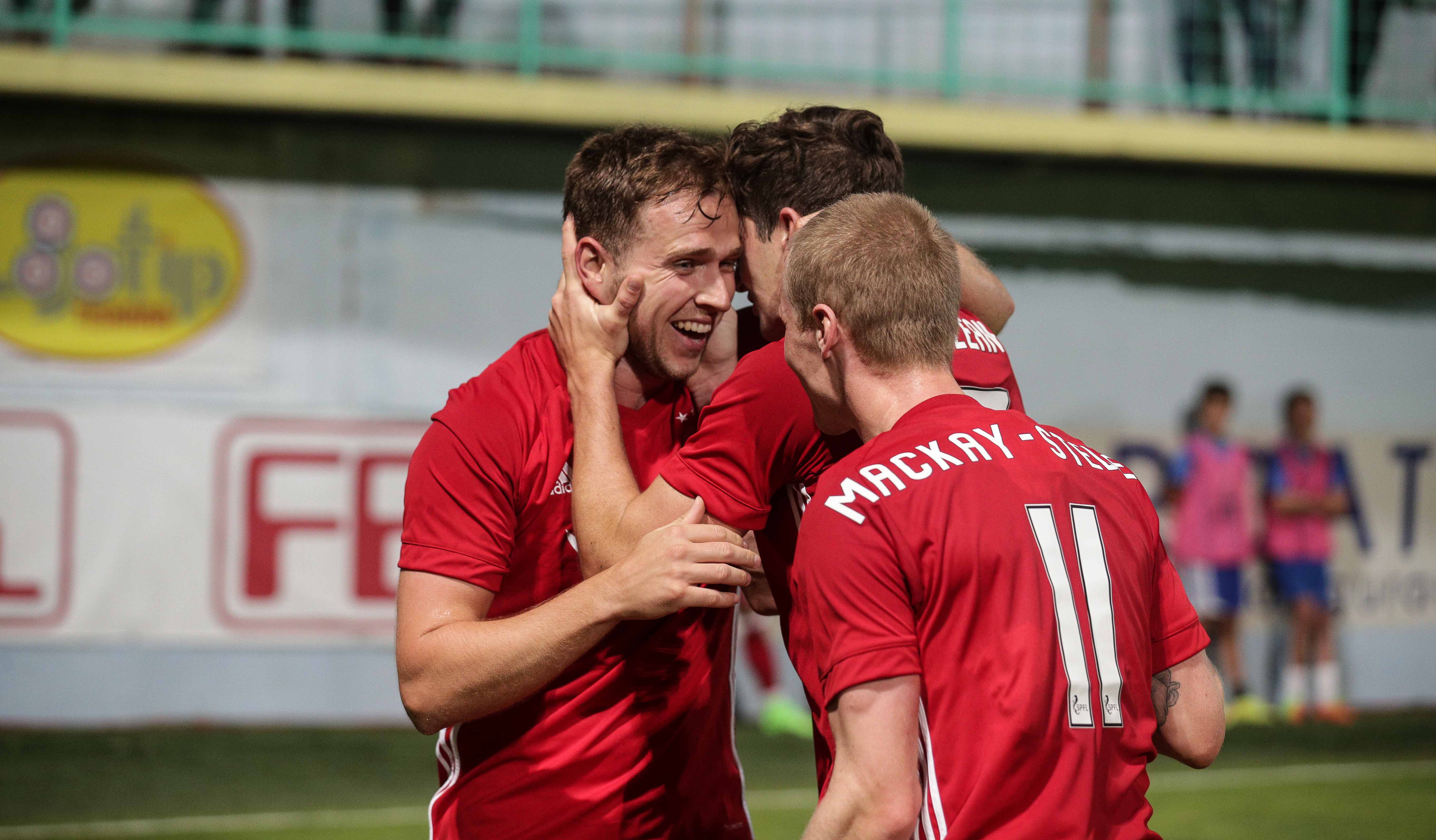 Derek McInnes made two changes to the side that drew 1-1 last week in Scotland. Jayden Stockley was free to play after suspension and Greg Stewart started after impressing in the first leg as a sub. Tansey and Rooney dropped to the bench.

The game kicked off in 90 degree heat. Despite the officials agreeing to a water break just prior to kick, it would still play a factor in proceedings. There was a noisy but friendly atmosphere inside the stadium with 170 Aberdeen fans watching on.

In the second minute Shay Logan put over a cross which was headed clear. A minute later Dino Coric broke clear down the right. His dangerous cross was very well cleared by Mark Reynolds at the near post. From the resulting corner Josip Coric headed just wide again at the near post area. A fortunate escape for the Dons.

In the seventh minute Shinnie won a free kick but from deep Logan's set piece was too strong. Although the pitch had not been watered the ball was still zipping off the short surface.

On 8 minutes Siroki forced another corner down the right. Again the Aberdeen defence was put under some pressure and were relieved when Shinnie won a free kick on the edge of the area when trying to break clear.
After 11 minutes Mackay-Steven showed some good skill on the left and refused to go down when fouled.
Unfortunately the ball defected off him and went behind for a goal kick. The same thing happened a few minutes later when Christie lobbed a ball forward in his direction.

The opening 15 minutes had been very tight.

On 19 minutes Christie and Mackay-Steven linked up well down the left but the cross was deflected and would not sit for Shinnie. At the other end Logan did well to put tall striker Cabraja under pressure so he could not get a clean header on target.

After 21 minutes a lucky escape when McLean flicked on a Siroki through ball. It took it away from O'Connor and Cabraja had a clean run through on goal. Thankfully his first touch was dreadful and Lewis was able to collect. Then a shooting opportunity for Begonja on the edge of the area. His shot was on target but Lewis was well positioned.

After 25 minutes Logan turned defence into attack with some great full back play. He also drew a foul and a yellow card for captain Barisic. Again though the deep free kick from Logan was over hit.

A 90 second water break then followed.

On the half hour mark, a nice passing move from the reds, their best of the game, led to a free kick out 30 yards out. Stewart's ball in was cleared, McLean then put over a good cross and then McLean had a shot which resulted in the Dons first corner. A pre-planned move saw the ball chipped to McLean on the edge of the area.

Kenny was completely unmarked but his volley was only half caught and Stockley could not divert the ball goalward. Some nice invention but the execution was not quite right. On 35 minutes wonderful wing play by Greg Stewart, he beat a couple of players and his cutback was only inches away from falling into the path of Shinnie.
On 36 minutes an injury to Joe Lewis allowed another water break.

On 39 minutes Considine was penalised for a foul at the back post after he won a header in the air. It looked a harsh decision as Andy appeared to time his jump perfectly. His effort clipped the post. After 40 minutes Christie was booked after giving away possession.

On 42 minutes the best chance of the game so far. Andy Considine did brilliantly to tackle Luka Menalo. As he rolled about the ground the Dons broke at pace and a cross from Mackay-Steven zipped across the six yard box but there was no one there. Then another opening when Greg Stewart produced another outstanding run but his driven cross could not find Stockley.

Although Aberdeen were now looking more dangerous they were almost caught out a few times at the back when moves broke down. In injury time at the end of the half a very clever early ball in almost allowed Cabraja at sighting on goal but O'Connor read the situation well. Aberdeen had to withstand pressure from a late corner but Lewis claimed it at the second attempt.

The second half started with a booking for Josip Coric. From Christie's free kick about 40 yards out Considine won the header and it was on target but did not have enough power to beat Bilobrk. Striker Krstanovic was then also booked for an elbow on Logan. Shay took a nasty cut above his eye and had to go off for treatment. Whilst down to ten men Stewart again produced a fine run but just slipped as he tried to cut back inside with no shot available.

The game was starting to become tense as both sets of supporters went quiet. The home side rightly had a hand ball appeal waved away on 56 minutes by the referee. The Danish official though was frustrating the Dons though with lots of soft fouls being given against them.

Just before the hour mark Lewis was forced into a smart stop to keep out a low shot from Krstanovic. At the other end the keeper looked less that convincing as he pushed away a shot from Christie which went across him. As Greg Stewart went for the rebound he appeared to be clearly impeded. A minute after that an even better chance when a Mackay-Steven cross found Christie unmarked but his header bounced into the ground and wide.

Aberdeen then forced a corner which was taken short. Shinnie had room but his shot hit a defenders leg on the way through. Then from a free kick Considine again got up well at the back post but his header went inches over with the keeper rooted to his line.

On 65 minutes after a Stewart shot was blocked the Dons were caught on the break but Reynolds showed support pace to get back and save the day.

After 66 minutes the first Aberdeen change, Maynard replaced Stockley. On 68 minutes another break caught the Dons out. The ball was well worked to the right. The cross in was volleyed goalward by Krstanovic but Lewis made a brilliant save to tip the ball over.

On 71 minutes Christie picked the ball up about 30 yards out. He produced a good turn and brilliant pass to Stewart who broke free inside the area. The winger still had a lot to do but riffled a low shot past the keeper into the net.

Straight after the goal Stewart took a knock and was replaced by Tansey.

On 77 minutes more great play from Christie made the tie safe. He picked the ball up on the right, on the half way line. He beat his man before drifting infield. Christie then spotted the run of Gary Mackay-Steven and threaded the perfect ball through. Gary took one touch before lashing a shot into the roof of the net.
Two brilliant finishes but also two pieces of brilliance from Christie.

With ten minutes to go Rooney came on to replace Gary Mackay-Steven.

The game was effectively over as the home side, who never really looked like scoring apart from the Lewis save, needed three before the end of the 90 minutes. The Red Army were able to enjoy the closing stages of another masterful European performance on the road from Derek McInnes' men.