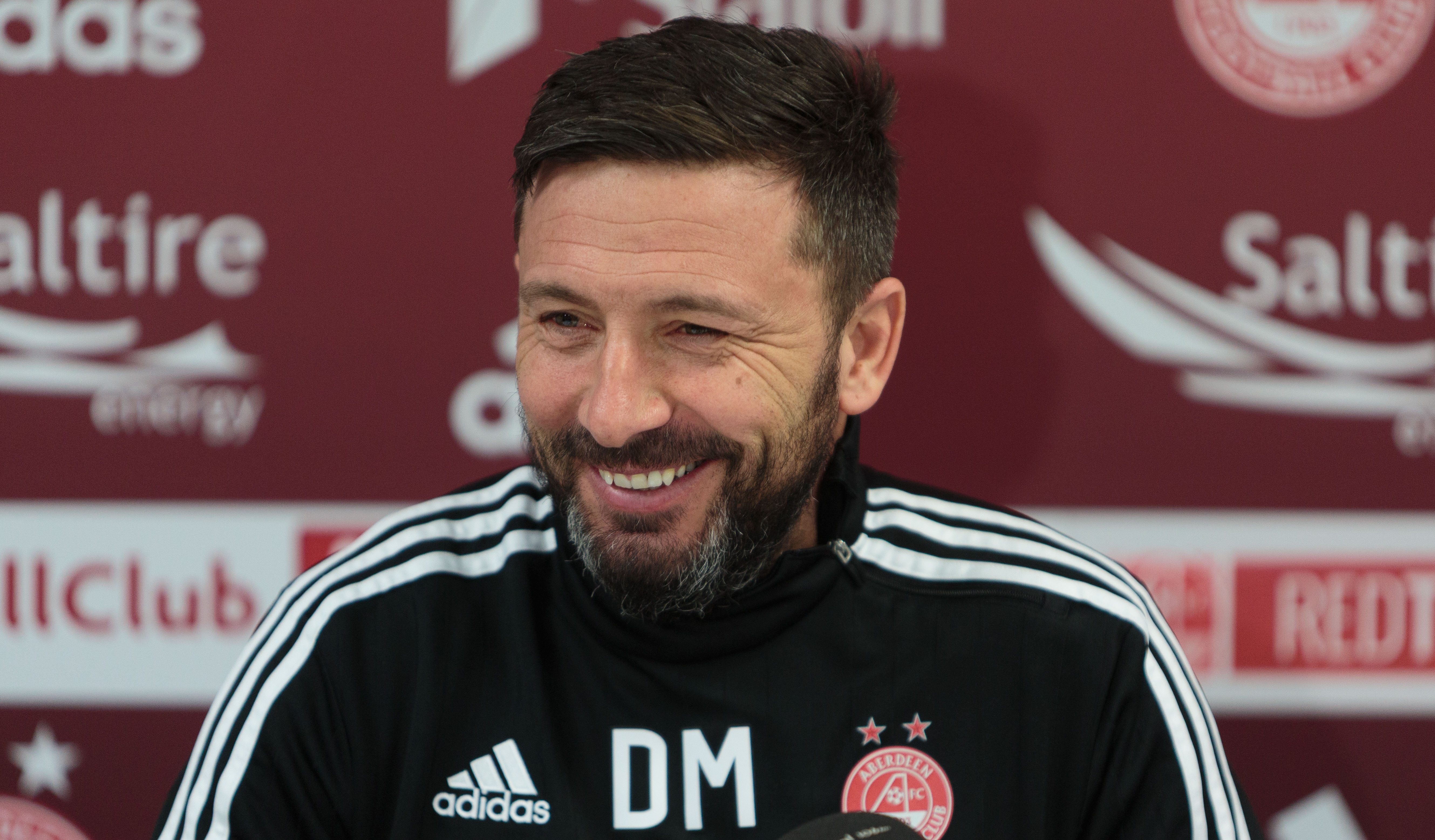 Aberdeen manager Derek McInnes did his pre-match media conference on Friday afternoon. He started by giving an update on the team news.

“Adam Rooney is definitely out and Simon Church is extremely doubtful. And young Connor McLennan is away with Scotland at the U17 European Championships. Cammy Smith is doubtful as well. He has not been able to train this week with a little back problem although he may travel tomorrow. It is far from ideal going into the game without recognised strikers. We are a bit short but will give Simon every opportunity to make it. If he misses this one we will have to adjust the team slightly.

“We will see what our options are but we may have to play someone out of position. It is important in any game but especially when you go to Celtic park that you still carry that goal threat.

“We don’t expect too many changes from the team last week but if we do make an adjustment we may have to call upon one of the younger ones. It is a good opportunity, with it being one of the toughest venues, it is an opportunity to give some of the young ones some game time as well.

“We are looking forward to the game despite the injury problems.

“I was really pleased with last week’s efforts. The players were excellent. They showed good energy and ability on the ball. We got off to a good start and had a firm control of the game. To score four goals is always pleasing. To lose our two strikers through injury was a negative though.

“We have three games to go. It is important we finish the season as strongly as possible and get as many points as we can with some strong performances.

“For us on Sunday, we are just trying to win the game.

“If we do all that then we have a chance. To beat them three times in a season it would show everyone what we are capable of.

“It is not about spoiling a party.

“It is about our own agenda and getting another three points. There are only nine points left and we want to get as many of them as possible. Our objective at the start of the season was to beat our record points tally from last season. It was also to get closer to Celtic and sustain a longer league challenge. We have done all that apart from beating our points tally. We want to do that.

“We will only enjoy the game if we win. No one enjoys getting beat. We have a job to do. Celtic are a team who can test your organisation so we have to make sure we have a good shape about us and a good way of playing and we have to be confident enough to get on the ball and exploit any space we get. Hopefully we can enjoy the game by winning.

“I would like to win the game, but win lose or draw Celtic know that we have been there this season. It is not about laying down a marker on Sunday. We have done that over the past 35 games.

“That pleases me. There have been times during the season where we had aspirations to win the league and there is nothing wrong with that. We have learned from last season, we have learned from this season and hopefully we can take that into next season.

“It needs to be said as well that Celtic deserve huge credit for their League challenge. They have only lost three games all season, twice against us. Their points tally that will probably win them the league will be up there with what most teams win a league by. They deserve credit.”

The manager also confirmed that he is speaking to a few signing targets as is quite far down the line with one or two but nothing is done yet.

“We are confident we will get a decent amount of work done in time for the players reporting back. These things are never simple but we will make good additions in the summer. The players who are out of contract, we should be able to answer that question next week.”

Match report
Despite a few injury concerns during the week the Dons lined up with the same team that beat Motherwell last Saturday. There was a first appearance on the bench for Joe Nuttall. 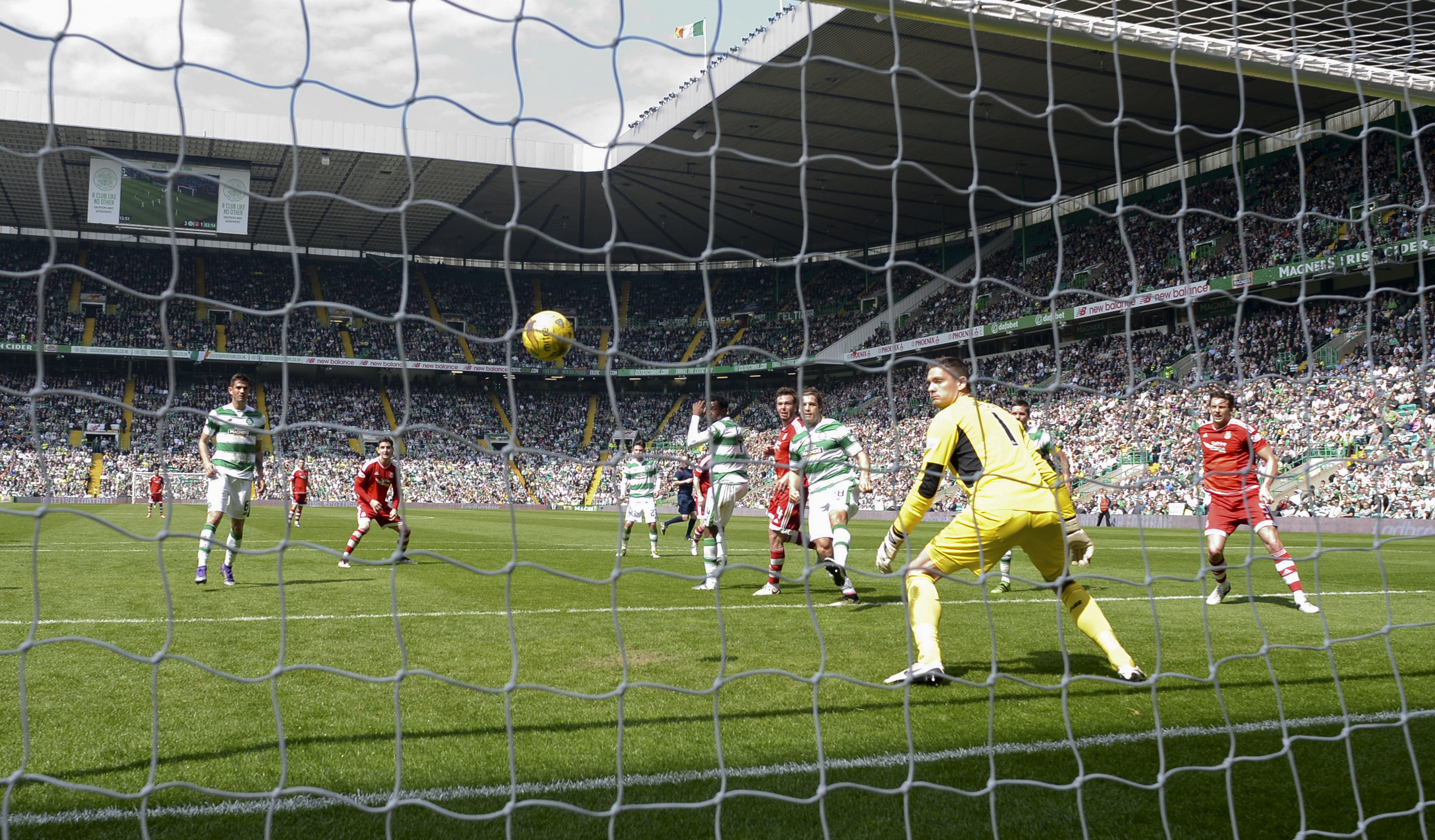 Match report
Despite a few injury concerns during the week the Dons lined up with the same team that beat Motherwell last Saturday. There was a first appearance on the bench for Joe Nuttall.

After a slow start Aberdeen had a great chance to take in the lead in the fifth minute. Jonny Hayes got to the by-line after a great run, comfortably beating Lustig, his excellent cross was meet by McGinn at the near post and Niall was completely unmarked but he could not divert the ball goalward. The Dons had a lot of joy down that left side the last times the team met in Glasgow and did again today.

Celtic then took the lead with their first real attack of the game. Patrick Roberts picked the ball up from deep. The Manchester City player was allowed to run infield and was able to angle a shot past Collin into the top corner from 25 yards. The Dons have lost too many early goals at this venue in recent times.

On nine minutes Aberdeen won a free kick out wide. Hayes swing in a good ball but Gordon came and collected. A minute later Roberts was again allowed to get a shot away but this time it was deflected behind for a corner. Although Aberdeen cleared the initial danger, Armstrong was able to put in another cross and the Dons were lucky to survive as three Celtic players failed to make contact.

At the other end Hayes was picking the ball up in some good areas but Celtic were by now putting two or three men on the Dons winger.

After 15 minutes a flick on by Church, he did well to win the header, very nearly put McGinn in the clear but Gordon was out quickly and just got to the ball ahead of Niall.

On 17 minutes Lustig was booked for a foul on Shinnie.

Then on 20 minutes, further poor defending allowed Celtic to grab a second. Considine and Shinnie were both drawn to the ball as they went to tackle Griffiths who was able to thread the ball through to the unmarked Roberts and he swept a shot past the helpless Collin.

Aberdeen enjoyed plenty of possession in the first half hour but were made to pay for some slack defending.
On 32 minutes Simon Church pulled up with an injury. He tried to run it off but looked to be struggling. On 37 minutes a Hayes free kick was on target but straight at Gordon who made a comfortable save.

On 39 minutes Logan was booked for a foul on Tierney. On 41 minutes Church had to finally admit defeat in his battle to run off his injury, he was replaced by Mark Reynolds. Shinnie went into the midfield area and McLean moved forward to join McGinn and Hayes.

A few strong challenges before the break helped finally to liven up a game that felt very much like an end of season affair.

At half time Mulgrew was replaced by Ambrose.

On 48 minutes Celtic grabbed a third. McGregor cut the ball back to Lustig who found space in the box and his finish beat Collin. From the Dons point of view it was another poor goal to lose. A minute later Flood was booked for a foul on Bitton. Celtic then won a couple of free kicks in and around the area but thankfully on both occasions the wall did its job.

The Dons really were going to have dig deep now.

On 53 minutes Aberdeen should have pulled a goal back. A mistake by Ambrose allowed Hayes to have a free run in on goal but from a tight angle Gordon was able to save his first shot and then Hayes could only bundle the rebound into the side netting.

A minute later Shinnie put over a really good low cross that beat Gordon but Sviatchenko was well positioned to knock the ball behind for a corner. Aberdeen were enjoying a good spell and deservedly then pulled a goal back. Considine played the ball to Hayes who crossed for an unmarked McGinn who stroked the ball past Gordon. A well worked goal.

On the hour mark Roberts might have been booked for simulation and then Lustig was slightly fortunate not to get a second yellow card for taking out Hayes who had beat him again.

Logan then put over a good cross from the right which Taylor was waiting to meet but Ambrose just managed to flick it clear. Hayes then put over a deep ball from the left which Mclean headed up into the air and Gordon claimed. Frustratingly McGinn was unmarked behind Kenny.

On 63 minutes Ambrose was booked for a foul on Shinnie. From the resulting free kick McGinn put over a cross and found Considine who managed to get in between the two Celtic central defenders and headed past Gordon.
Game on!

On 67 minutes Celtic worked the ball to Rogic who in turn played in Griffiths who had got in behind Logan but Collin did very well to stand up to the shot and block with his legs.

After 72 minutes Lustig was replaced by Janko. In his first involvement in the action he was caught by Shinnie who was about to play in Hayes but the referee gave a free kick to Celtic. It looked a close call. A minute later the same two players were involved again in the same area and this time Aberdeen got the decision. McGinn’s ball in was met by Logan who should have hit the target from close range but headed just wide. A real chance for Shay who had made a great late run into the box.

Aberdeen were all over Celtic with 15 minutes to go and the pace of McGinn and Hayes was causing the home side real concern.

On 78 minutes Flood was replaced by Robson. Aberdeen then came agonisingly close to an equaliser when a McGinn corner was headed back across goal by Considine but McLean standing in the middle of the goal failed to get a touch and then Taylor could not force the ball over the line at the back post.

On 81 minutes Rogic was replaced by Johansen.

Aberdeen pushed hard for a deserved equaliser but were left frustrated. On 89 minutes Considine’s cut back just failed to find Shinnie. Then Jack’s ball in was flicked on by McLean by Considine could not get a touch and finally from a corner Considine headed over.