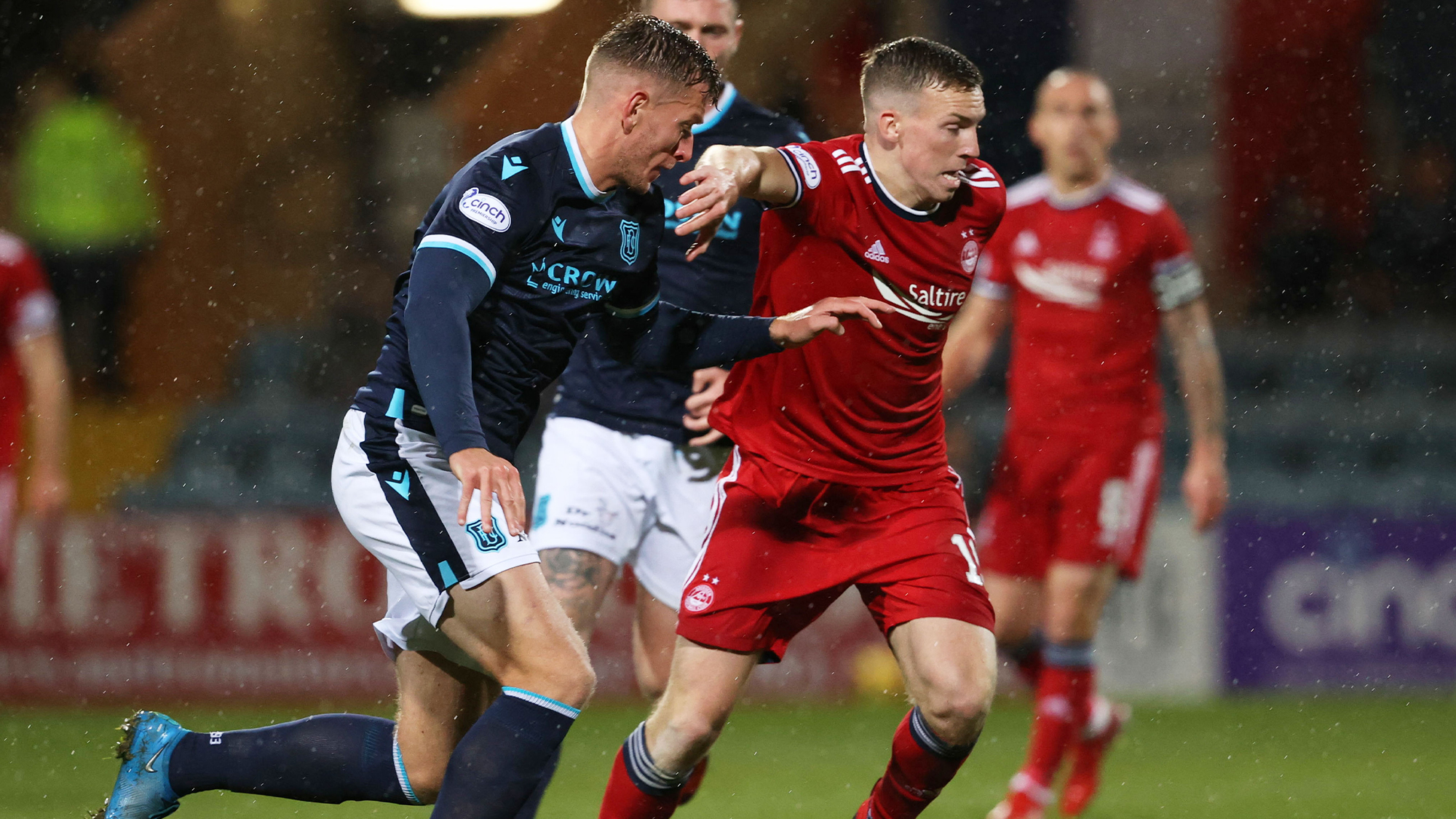 Joe Lewis spoke to the media after game with Hibs, to preview our Boxing Day clash with Dundee. To watch on RedTV, please press here. 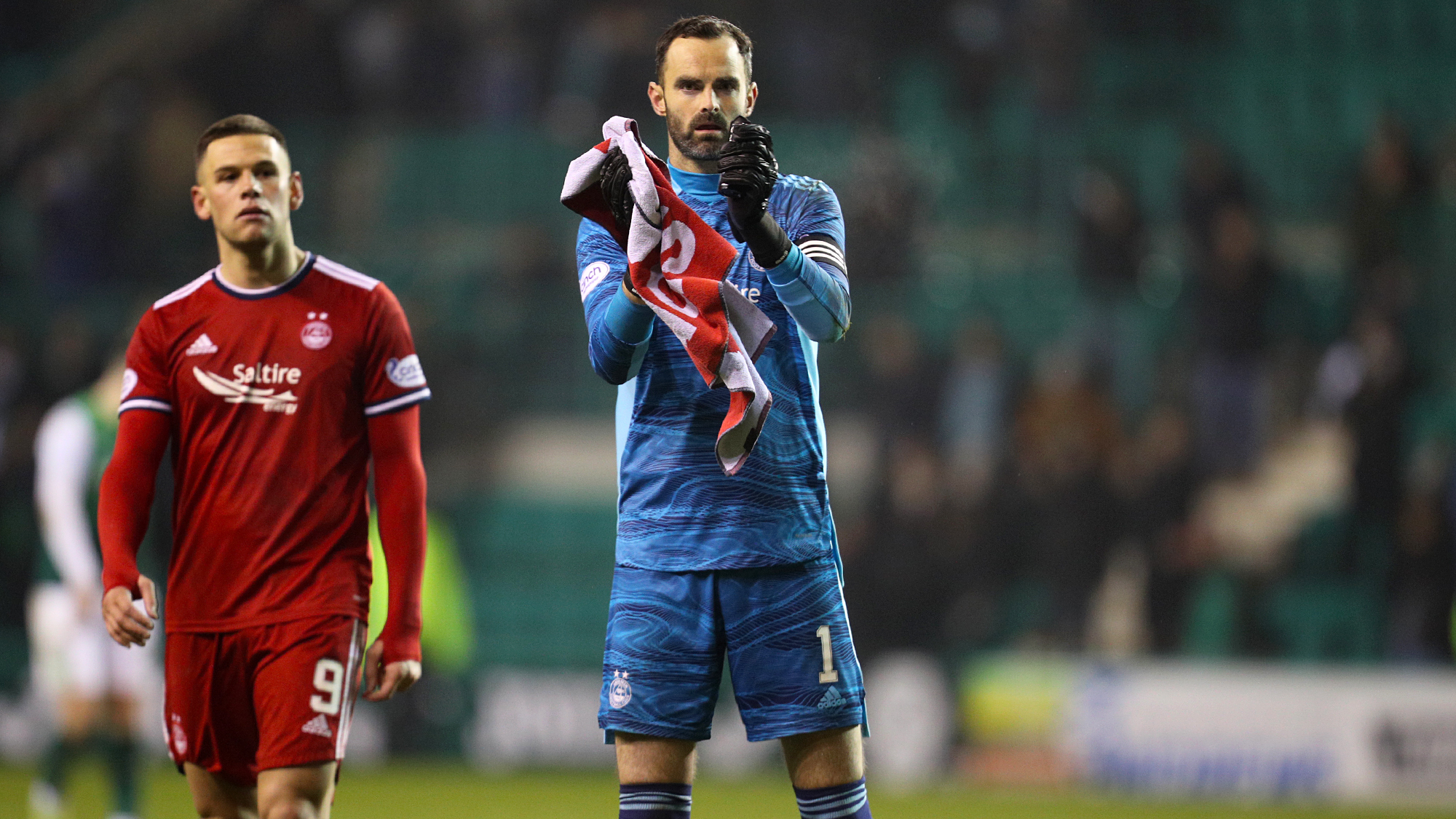 “There are games when you have a lack of energy. It is difficult to explain why it happens, it shouldn’t happen but we need to make sure that it doesn’t happen again anytime soon. The supporters made a long journey down to Edinburgh and it was disappointing to serve up that type of performance.  I don’t think we were miles off it in the first half but it seemed like we were waiting for something to happen. That is not the way we have been approaching games or playing of late. We need to make sure it is a one off and we put it right on Sunday.

“We will have what happened the last time we played Dundee in the back of our mind. You need to play with composure and we can’t be all out fight. We need to show a real reaction from Wednesday’s game and from our last game with Dundee. We need to make sure that we deliver a performance that is fitting of the magnitude of the game, even without our supporters there. 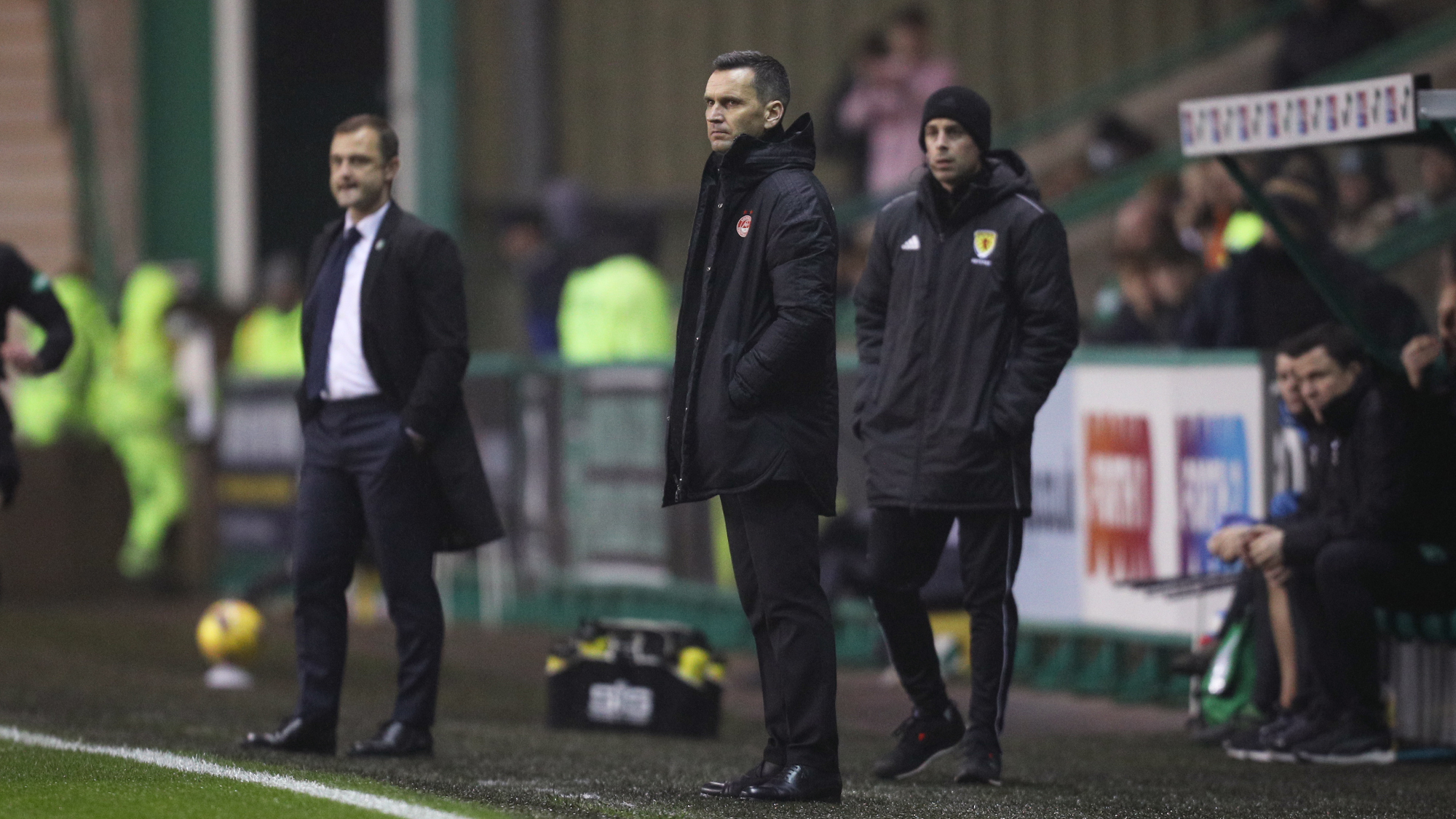 The manager also spoke to the media to preview our game with Dundee.

“Our home form of late has been pretty good. We go into this period having won four out of the last five at Pittodrie and the one we lost, against Motherwell, could have been a different story had we taken our chances in the first half. In the main, the players have performed well at home. If we keep the performance levels up here, then the chances are you will win more games than you lose. I believe we will see that continue over the course of the season, whoever the opponent.

“We were not good against Dundee when we played them earlier in the season at Dens and we very much want to put that right.

“The Red Shed has been a brilliant addition this season. It sometimes lifts the rest of the stadium and it is lively the whole time. The fans have taken ownership of that and it is good to see. It is the same group of supporters every week and they make plenty of noise. When the team is rolling, it certainly feels good.

“It is certainly something we are going to miss on Boxing Day.

“We know how many people come back to the Aberdeen area over Christmas and want to go to a game with their family. It is very disappointing that they won’t be able to do that.”

The Last Time Out at Pittodrie

The last time Dundee visited the North East came back in December 2018 when The Dons made it three wins on the bounce with an emphatic 5-1 victory at Pittodrie. A Sam Cosgrove double had us two goals up at the break before goals from Andy Considine and Connor McLennan made it 4-0 to The Dons inside the opening hour. On loan Celtic full back Calvin Miller pulled a goal back for The Dens Park side but Considine grabbed his second and our fifth of the night to seal the three points. The victory saw Aberdeen move a point off of Rangers at the top of the league.

After the game, double goal scorer Andy Considine said: “I managed to get a couple of goals, which was great and the only negative was that we relaxed a little bit too much and didn’t manage to get that clean sheet. All in all, I thought it was an all round good performance and ideally you want to make Pittodrie that kind of place that teams don’t want to come to. Performances like that is going to reek confidence throughout the squad.” 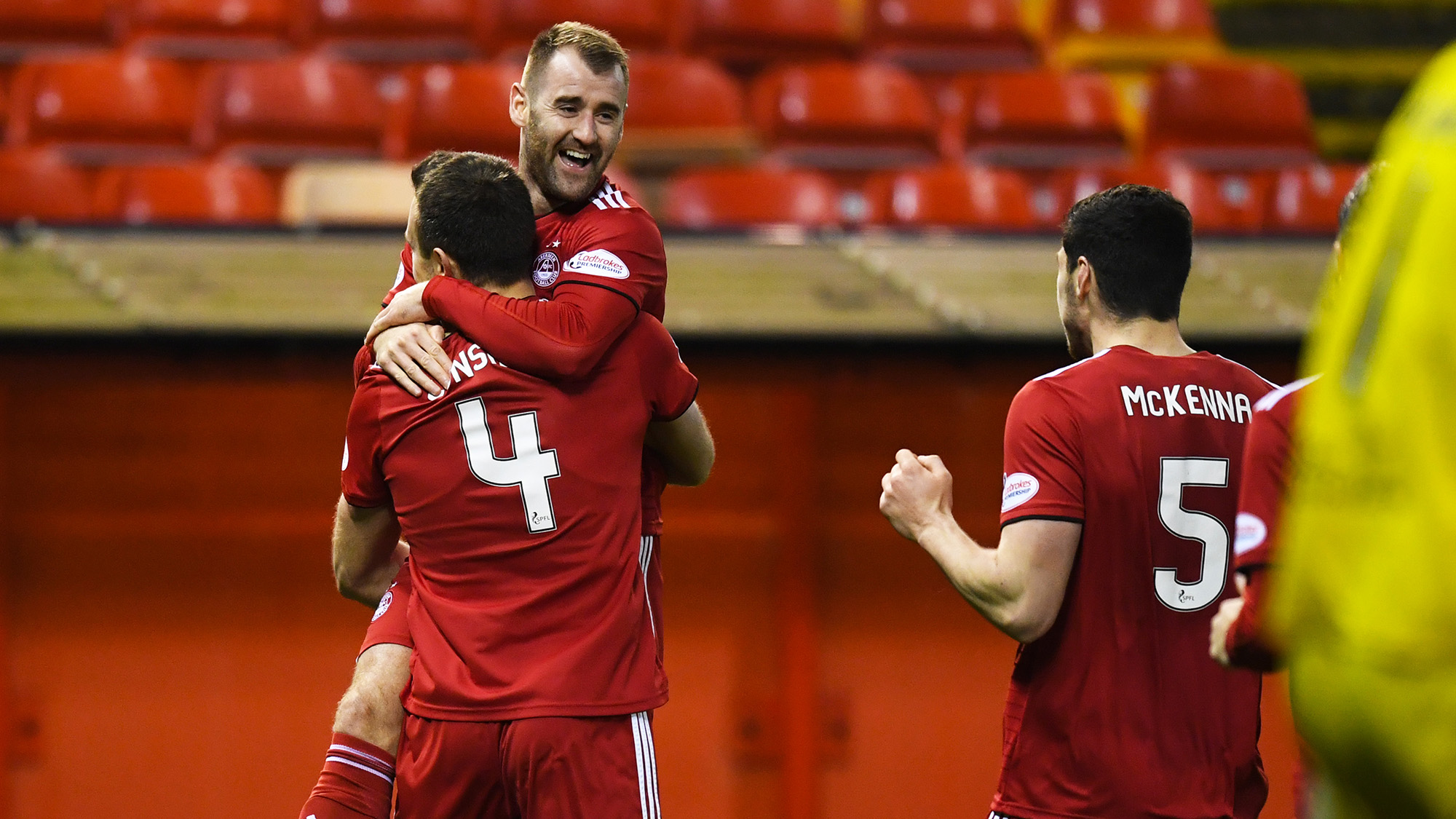 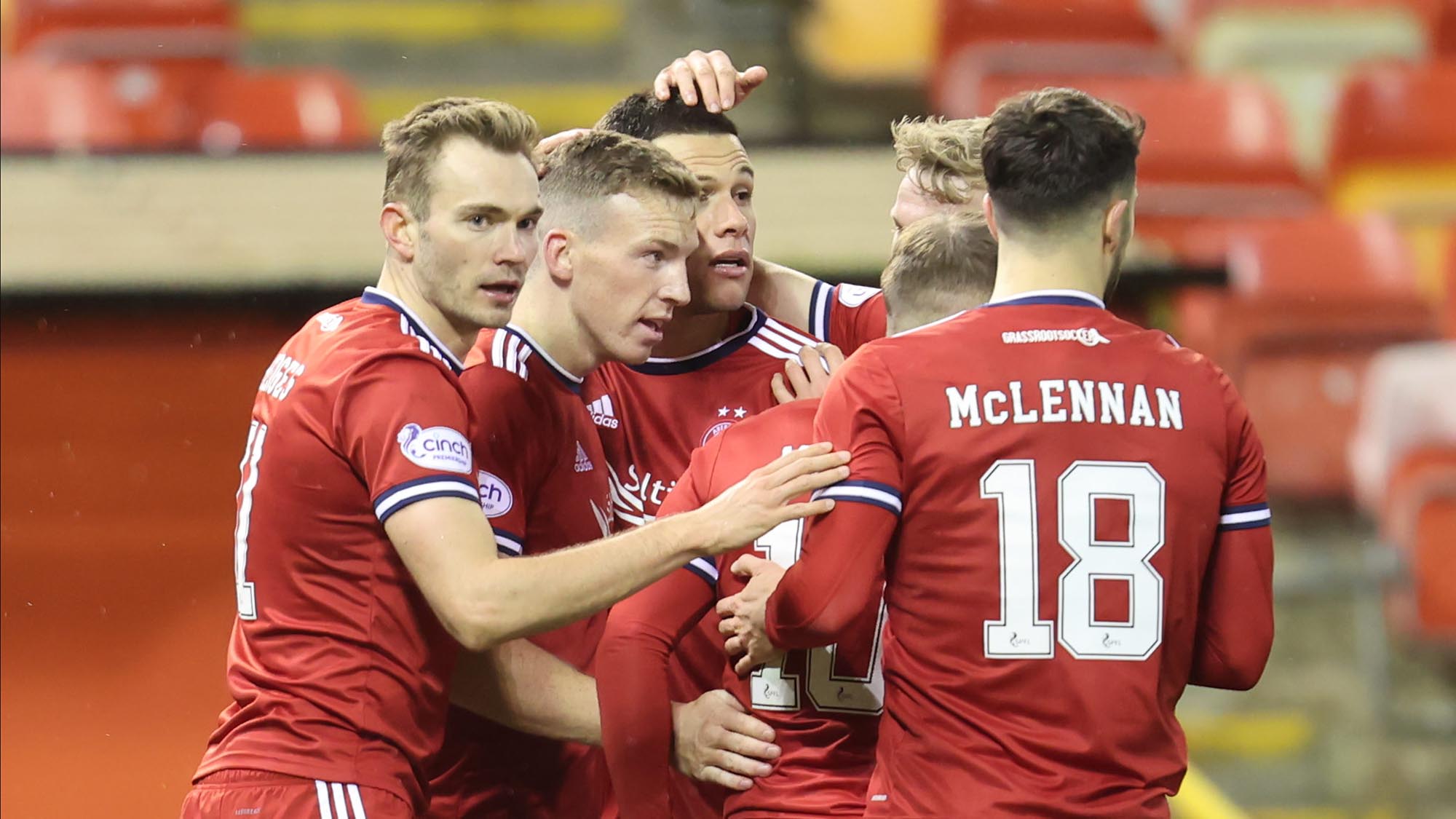 Aberdeen had to do it the hard way, coming from behind, but they signed off for the early winter break with a 2-1 win over a depleted Dundee that put the Dons back into the top six.

There were three changes for the Dons from Wednesday night’s defeat at Hibs. In come Ross McCrorie after suspension, Calvin Ramsay and Teddy Jenks with Declan Gallagher, Dean Campbell and Jay Emmanuel-Thomas starting from the bench.

There were four changes to the Dundee side that lost 1-0 at home to Hearts last weekend, Jordan Marshall, Ryan Sweeney, Alex Jakubiak and Corey Panter all starting. Missing were Chris Elliott, Paul McMullan, Daniel Mullen and Max Anderson. Their bench included goalkeeper Harry Sharp as an outfield player and assistant manager Dave Mackay.

In front of a largely empty Pittodrie because of the new Covid restrictions, it was the visitors who got off to the best start, taking the lead on seven minutes. From a free-kick, pretty central but some 30 yards out, Griffiths fired a ferocious left footed shot, the ball taking a deflection off Jonny Hayes in the wall, causing it to swerve away from Joe Lewis and into the roof of the net.

The Dons weren’t long in squaring things back up though, the game going level on 12 minutes. There was good interplay between Jenks and Ryan Hedges, the Welshman weaving his way into the box to fire a low shot through Legzdins and in to restore parity.

A corner from Ramsay had Dundee in trouble a couple of minutes later, Legzdins flapping it away as Aberdeen began building a head of steam. Hedges fired over on 21 minutes having run in behind to collect a Funso Ojo pass down the right, Aberdeen having some success with the longer ball early on.

It was a tactic that benefited Dundee too, Jakubiak in behind McCrorie on 24 minutes, but his shot from a tight angle was never worrying Lewis.

Kerr was lucky to escape a card on the half hour, a stray arm thumping into Hayes’ face as he looked to get on the run down the left. McGhee did go in the book a minute later after flooring McCrorie with a lunging tackle.

Marley Watkins was next to threaten on 32 minutes. A raking pass forward from David Bates set Hedges on the chase, pulling the ball back to Watkins on the edge of the area, but he stabbed his effort wide of the target. Ramsay was next to try his luck with a punt from 35 yards out, but the ball flew into the empty Red Shed.

Hedges certainly had the bit between his teeth, some lovely skill taking him into the box and past a couple of challenges on 38 minutes before he finally ran out of room as the Dons looked for that second goal before the interval.

There was a booking for Panter within 30 seconds of the restart as he scythed down Hayes on the left flank. From the free-kick, Aberdeen won a corner and Ramsay’s delivery reached Christian Ramirez at the back post. His powerful header struck a Dundee arm – purely accidentally – and went behind. The second corner caused further chaos, Legzdins clawing the ball away from under his crossbar as the Dons looked to turn up the wick.

Connor McLennan was Aberdeen’s first switch, replacing Jenks on 57 minutes, looking to inject some pace into the attacking play. He was released by a quick break involving Lewis Ferguson and Hedges five minutes later, his cross blocked behind. From the corner, Watkins took an awkward tumble as he got off a shot at goal. He continued briefly after treatment before having to give up the ghost, Niall McGinn coming on after 69 minutes.

Within a minute, the two subs were involved in getting Aberdeen in front. A clever header by Ramirez on halfway found McGinn who swept the ball out to McLennan. His pullback across goal was just behind Ramirez who got a slight touch on the ball into the path of Ferguson and he swooped down upon the ball on the edge of the box and laced a vicious shot back across the face of goal and into the far corner.

McCrorie had a half chance to seal things on 77 minutes, Ramsay’s free-kick half cleared to the edge of the box where the defender chested the ball down but then volleyed over.

A mazy run from McLennan took him past a couple of challenges before his cross was blocked behind – had he gone down following a nudge on his way, McLennan would surely have won a penalty. From the corner, Ferguson stretched for a header at the back post, but put it wide. Ramsay then made way for Campbell with nine minutes to go, Ojo going back to right-back.

Kerr was the third Dundee man booked, poleaxing Hayes as the two went up for a header after 86 minutes.

Panic in the Aberdeen defence on 89 minutes as McGowan launched a free-kick into the box. Dundee won the first ball, Fontaine and McCrorie coverging on the second. The ball squirted off them and beyond Lewis, Ojo acrobatically clearing from inside the six yard box to keep the lead intact and take the Dons back into the top six.