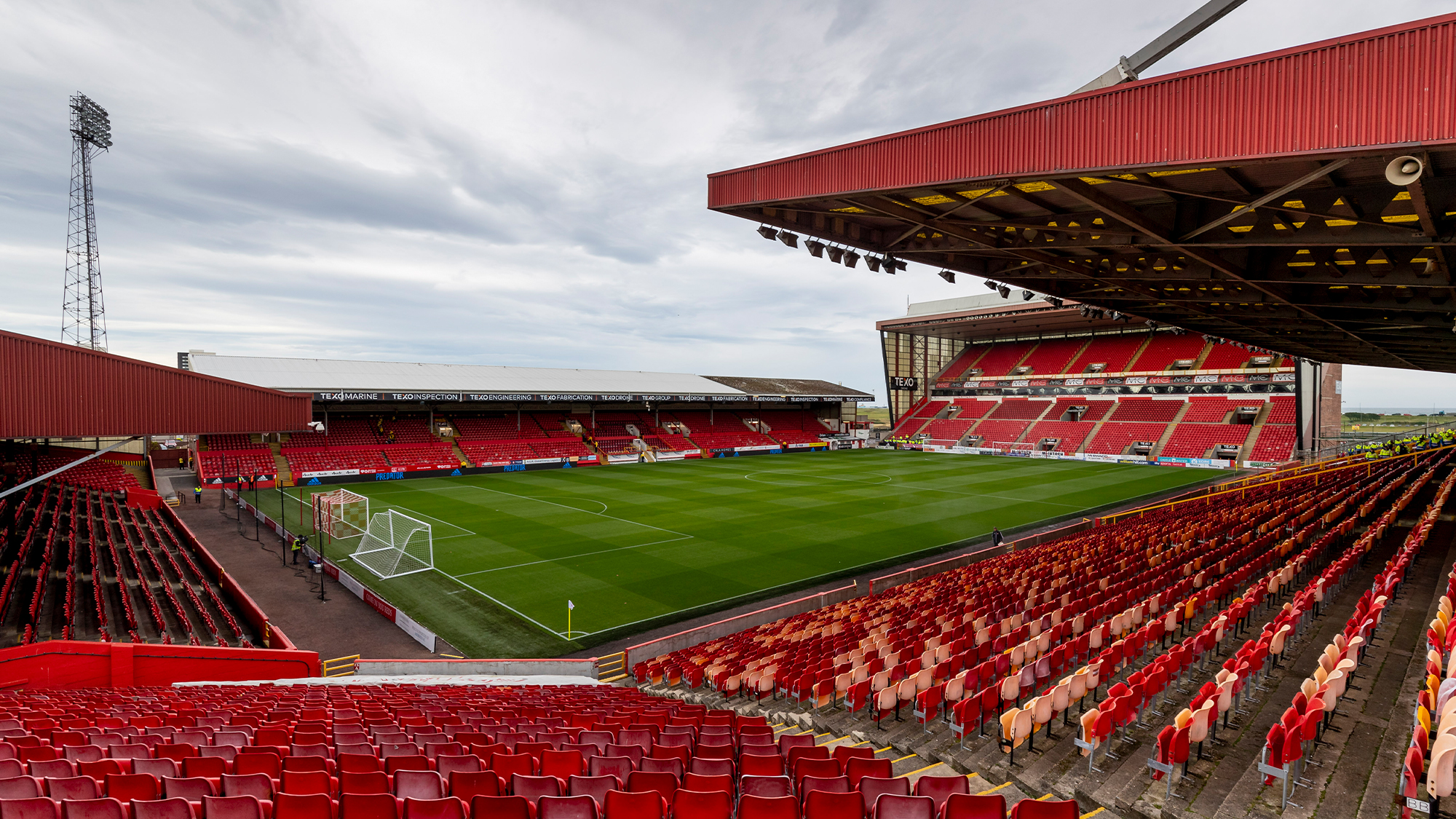 Derek McInnes spoke to the media ahead of the match with Kilmarnock. 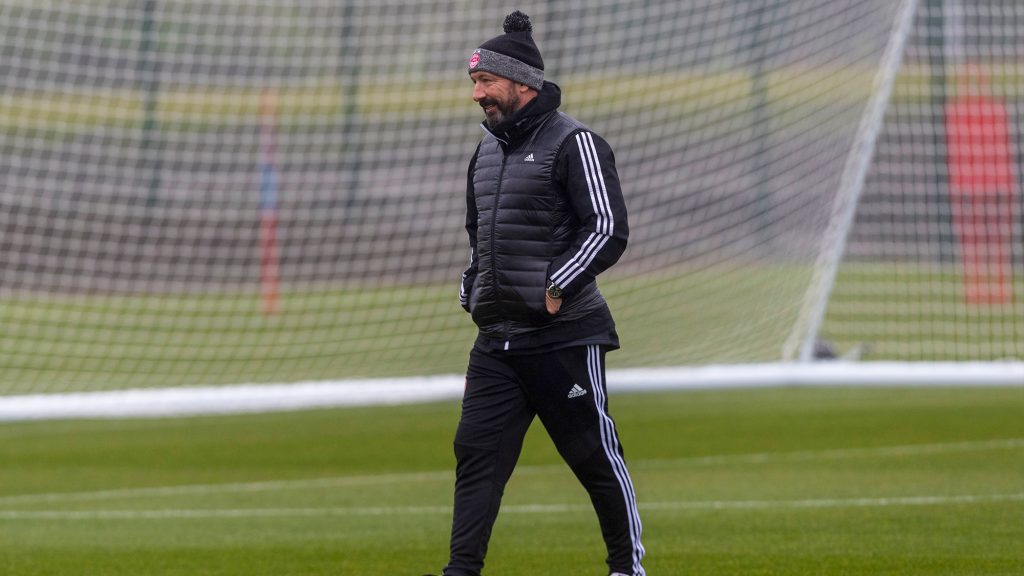 “I was grateful that we had a game so quickly instead of stewing all week. It was the right response.

“It doesn’t mask everything from Sunday’s game, it was a disappointing performance from us.

“We should have been out of sight; we should have won by a lot more, but the three points was the most important thing.”

“We now face Kilmarnock at home and hopefully we can put together another win, on the back of that one and just try and get some momentum now into our campaign.

“They don’t lose many goals. Their defensive record mirrors a lot of what was going on before.

“I think it says a lot about the new manager and their players that they have managed to continue a lot of the good work that has been done over the last 18 months.

“Up until Wednesday’s game, I think they had only lost four goals in eight games which tells you how tough it is to break them down.

“We found that at Rugby Park earlier this season when we drew 0-0 in a game that wasn’t very memorable. They were difficult to breach and hopefully we can find the performance in us on Saturday to ask more questions of them.”

“We are hopeful that Craig Bryson will be okay.

“Ash Taylor is back training and he will be added to the squad. We are mindful that he has been out for around 13 weeks.

“There are no further injuries from the Hamilton game.”

“The supporters had every right to be disappointed (with the Celtic game). There was nobody angrier than me.

“From their point of view, they just want to see their team winning, we are all the same.

“Winning on Wednesday will help with the players and their confidence and hopefully we can carry that on come Saturday.

“The supporters have been terrific. They were brilliant when we played Hibs.

“They just want to see their team winning.

“We are still early in the season, there is loads of football ahead of us and hopefully now we get one or two back we start to show more of our strength and show that through results in the coming months.” 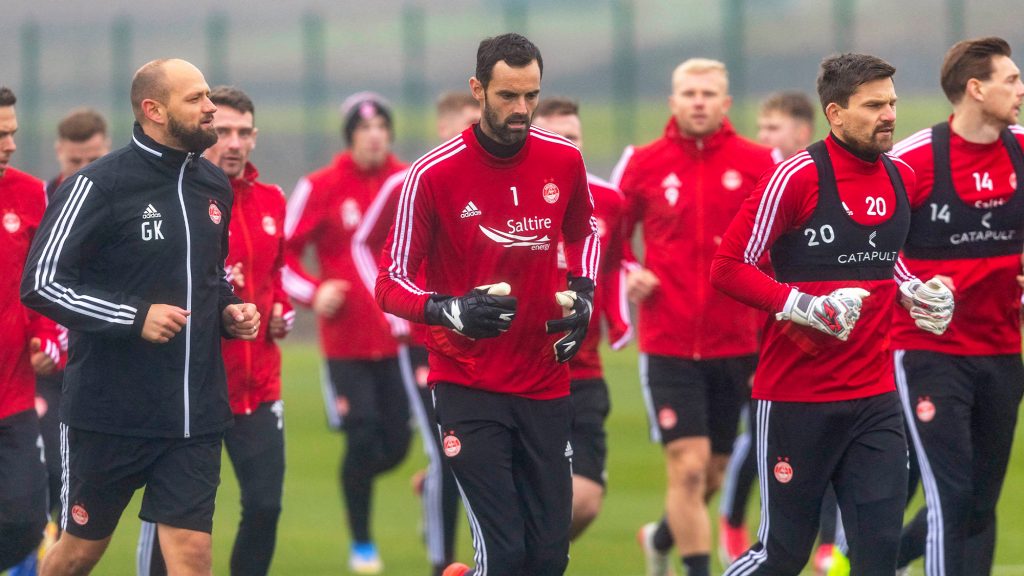 “It is going to make a huge difference.

“From the first team point of view we get the immediate benefit of the first-class pitches compared to what we have been used to.

“It is fantastic for the club.”

“To bounce back after a hugely disappointing result last week, the score line didn’t really reflect the performance. It was a really good performance from the boys.

“The important thing was to get the three point, get back to winning ways and we look to Saturday to try and build on that.

“Playing at Aberdeen the expectation is high and rightfully so. We have to keep our focus on the games and performances and look to improve.”

“Kilmarnock are a strong team. They are a slightly different team to what they were last season. We will go through the details of what sort of team they are and look to build on a good performance against Hamilton.” 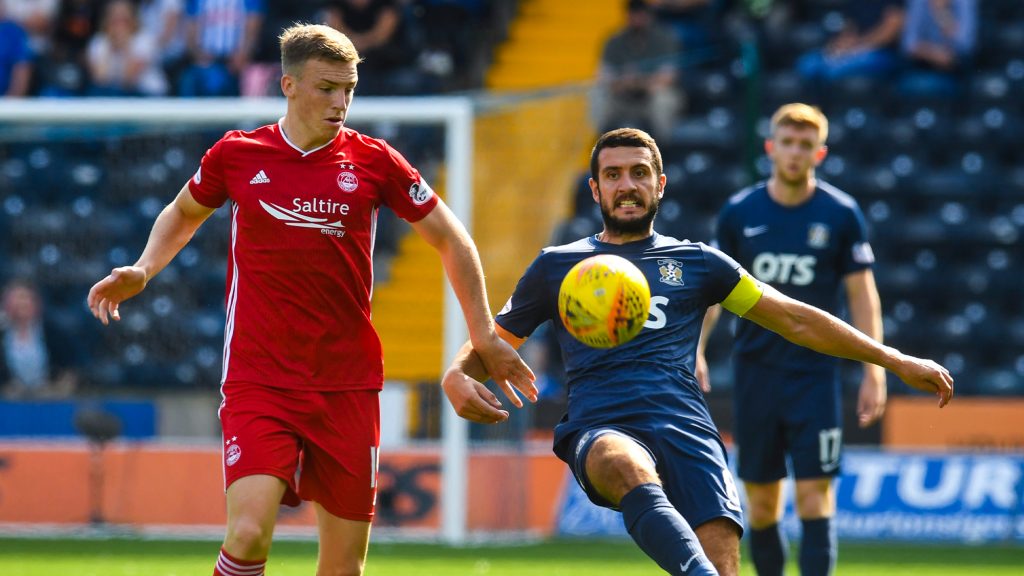 The two sides met earlier this season and played out a largely forgettable goalless draw. Chris Burke had the best chance for the home side when he rounded Joe Lewis but fired wide. 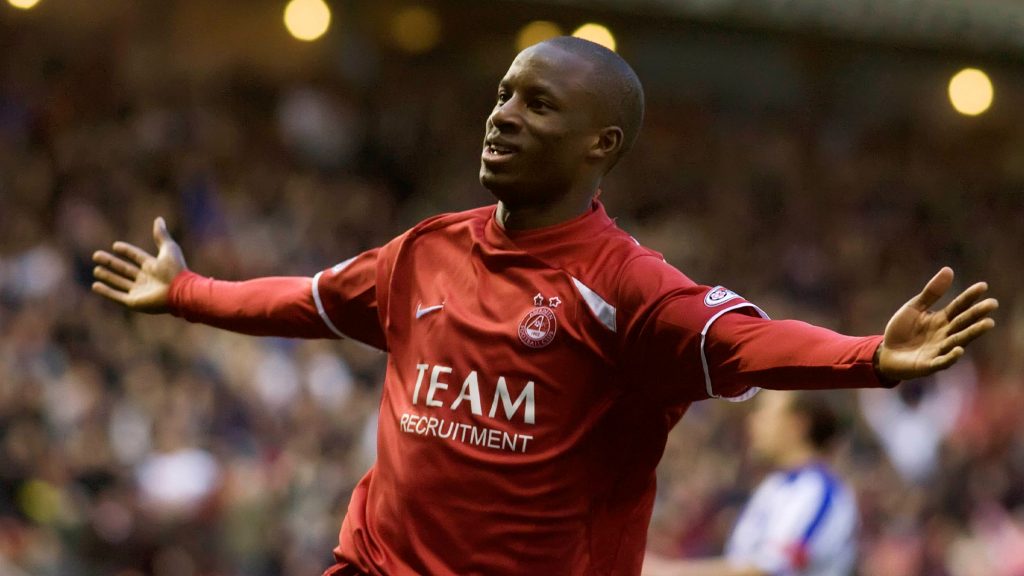 Aberdeen secured a narrow 1-0 victory against the Rugby Parkoutfit. Sone Aluko grabbed the only goal of the game when broke down the left hand side before scoring from a tight angle. 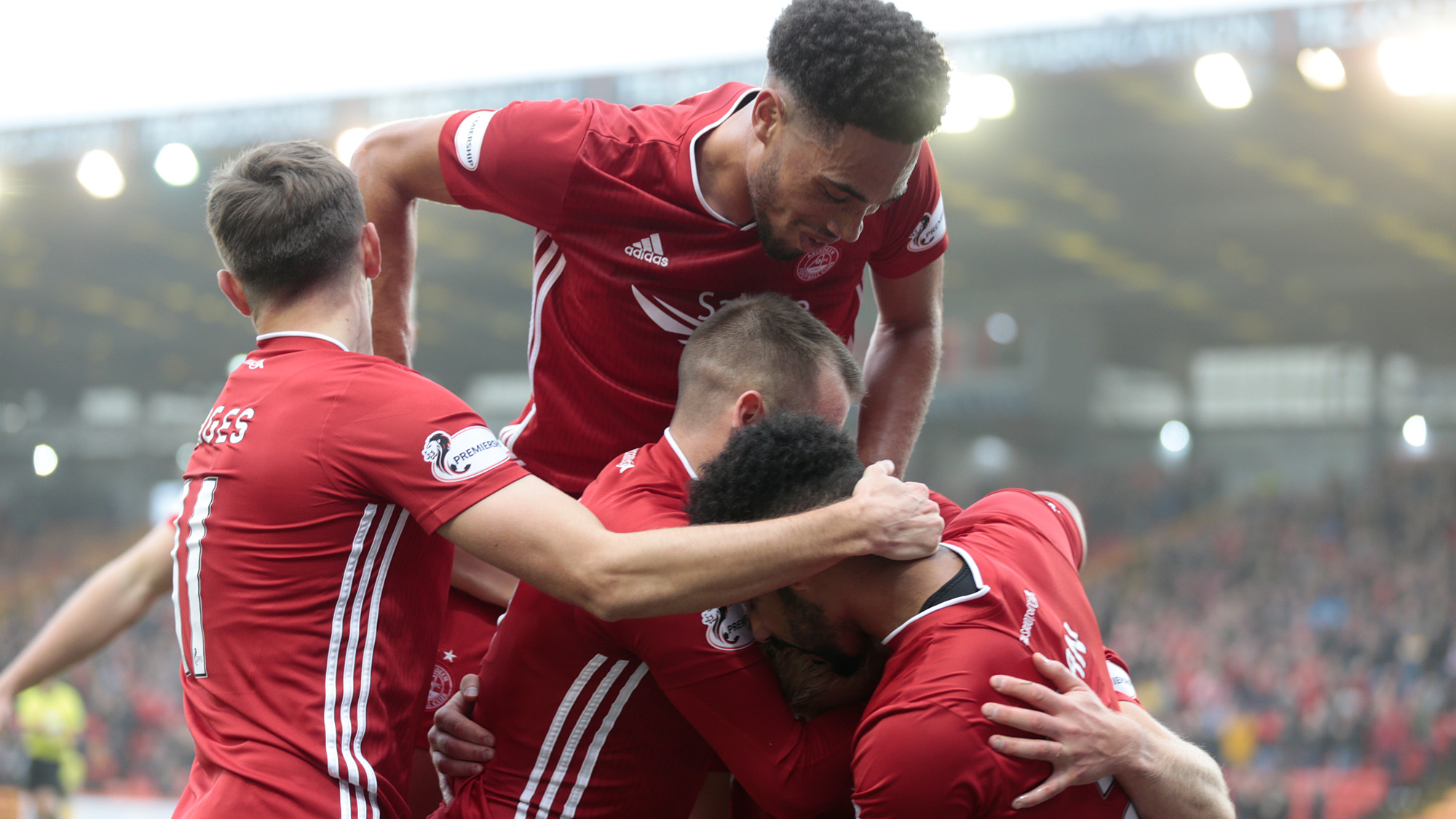 A vastly superior Aberdeen, playing some lovely football throughout, were far too good for Kilmarnock at Pittodrie, scoring three good goals to open up a four point gap between the two sides.

Ahead of this fourth v fifth clash and fresh from the 1-0 win at Hamilton in midweek, Derek McInnes made just two changes to his Aberdeen starting XI, Michael Devlin and Curtis Main coming into the side in place of Andrew Considine, who dropped to the bench, and the injured Craig Bryson. James Wilson came into the matchday 18 on the bench.

Kilmarnock made four changes from the side beaten 2-1 at Motherwell on Wednesday, Bruce, Johnson, El Makrini and Jackson all out, replaced by four players who started on the bench in midweek, Wilson, Millar, Burke and Brophy.

On a slippery surface after torrential rain earlier in the day, Killie’s Brophy had the first sight of goal, firing well wide from 15 yards out in the second minute.

In the 11th minute though, the Dons were in front after a terrific move from back to front that included half a dozen passes before Lewis Ferguson, wide on the left, played in a sublime ball over the Kilmarnock defence to pick out Curtis Main, hurtling into the box to throw himself full length to bullet a diving header back across the goal and into the far corner for a memorable first goal for the club.

Joe Lewis was called into action in the 18th minute, diving away to his right to push away a McKenzie effort, the Dons responding quickly, Zak Vyner dragging a low shot just wide from 20 yards a minute later. Sam Cosgrove burst into life a moment later, collecting a ball from Ryan Hedges, darting into the box and pulling his shot through the six yard area but just past the post. The Dons were playing some lovely, crisp football now, another sharp move from deep in their own half ending only when Niall McGinn misjudged his cross and overhit it in the 21st minute

Great play in the 26th minute opened Killie up again, a clever flick from Main onto Cosgrove letting him get another shot in, Wilson swooping down brilliantly to block. It was but a minor delay though, for from the resulting corner, played short by Hedges for McGinn to cross, Cosgrove got up best to head the ball down into the ground and up into the roof of the net off goalkeeper Branescu. Goal number 16 for Sam and another assist for Niall after an excellent cross.

The visitors responded and in the 31st minute, Burke fired in a free-kick from the far left touchline, about 20 yards out, Dicker getting a flicked header on it from the edge of the six yard box, Lewis making a superb, if slightly unorthodox reflex save, the ball catching him full in the face before bouncing clear.

Greg Leigh was the next to cause problems, a little shimmy on the left taking him past O’Donnell before standing the ball up to the back post where Main and McGinn got in one another’s way as the cross went behind in the 37th minute.

Killie were getting more involved in the game though but with little to trouble the Dons, Brophy’s shot on the turn comfortable for Lewis to take in the 41st minute, then a minute later, Hämäläinen bombed forward down the left before flashing a shot across the goal and wide from 20 yards. Lewis had to make another fine save in the 44th minute, Power’s shot from distance taking a thick deflection off Burke that forced the goalkeeper into sharp action, full stretch to his right, ensuring the two goal lead remained intact at the break.

Kilmarnock penned Aberdeen in early on in the second half, Lewis making a clean take at his near post after a fierce drive from O’Donnell. From there, the Dons went straight up the other end, Cosgrove collecting the ball on the edge of the box in the 48th minute before turning quickly and firing off a shot that flew past Branescu but unfortunately bounced back into play off the foot of the post.

The visitors introduced Hendrie to the game in place of Thomas in the 54th minute, Hendrie going into central defence to allow Dicker to return to his more normal midfield berth. Devlin went into the book almost immediately after being fractionally late with a tackle on McKenzie.

Incredibly, referee Clancy and his assistant missed a blatant penalty in the 57th minute, Cosgrove hacked down by Hendrie at the by-line, a poor decision that was followed by Aberdeen’s first substitution, Gallagher replacing Hedges. Vyner then became the second Don in the book as the game became scrappy for a while.

Cosgrove was close to another penalty in the 62nd minute when Wilson shoved him to the floor but again, nothing doing, another surprising decision from the whistler. Two minutes later, Cosgrove was down in the area again, this time with injury and he was replaced by McLennan.

He was almost on the scoresheet in the 67th minute, a lovely run by Gallagher down the run ending with him picking McLennan out. His clever first time right foot shot on the run produced a brilliant low save from Branescu to his left to keep his side in the game. The two locked horns again in the 68th minute, McLennan darting onto a long ball at inside-left, firing first time at goal again, Branescu just as impressive in tipping the ball over.

St Clair replaced Burke in the 70th minute as Kilmarnock tried to find themselves a lifeline. Instead it was the Dons who almost stepped it up, Ferguson heading off on a mazy run into the box with Hämäläinen hanging off his back before bludgeoning a shot at goal, Wilson somehow heading the ball off the line.

Dicker was carded for dissent in the 76th minute as the Dons pressed again, winning two corners in quick succession without finding a way through. Considine then replaced McGinn in Aberdeen’s final change, Leigh pushing into midfield. Millar was replaced by Jackson moments later.

The well deserved third goal finally arrived in the 81st minute, McLennan driving a skimming corner into the near post. Leigh manufactured a neat flick on and at the back post, Scott McKenna was lurking to force a left foot volley into the net from inside the six yard box.

Brophy tried to find consolation in the 90th minute, a 30 yarder flying over the bar, but this really wasn’t Kilmarnock’s day, the Dons better than their opponents in every department.