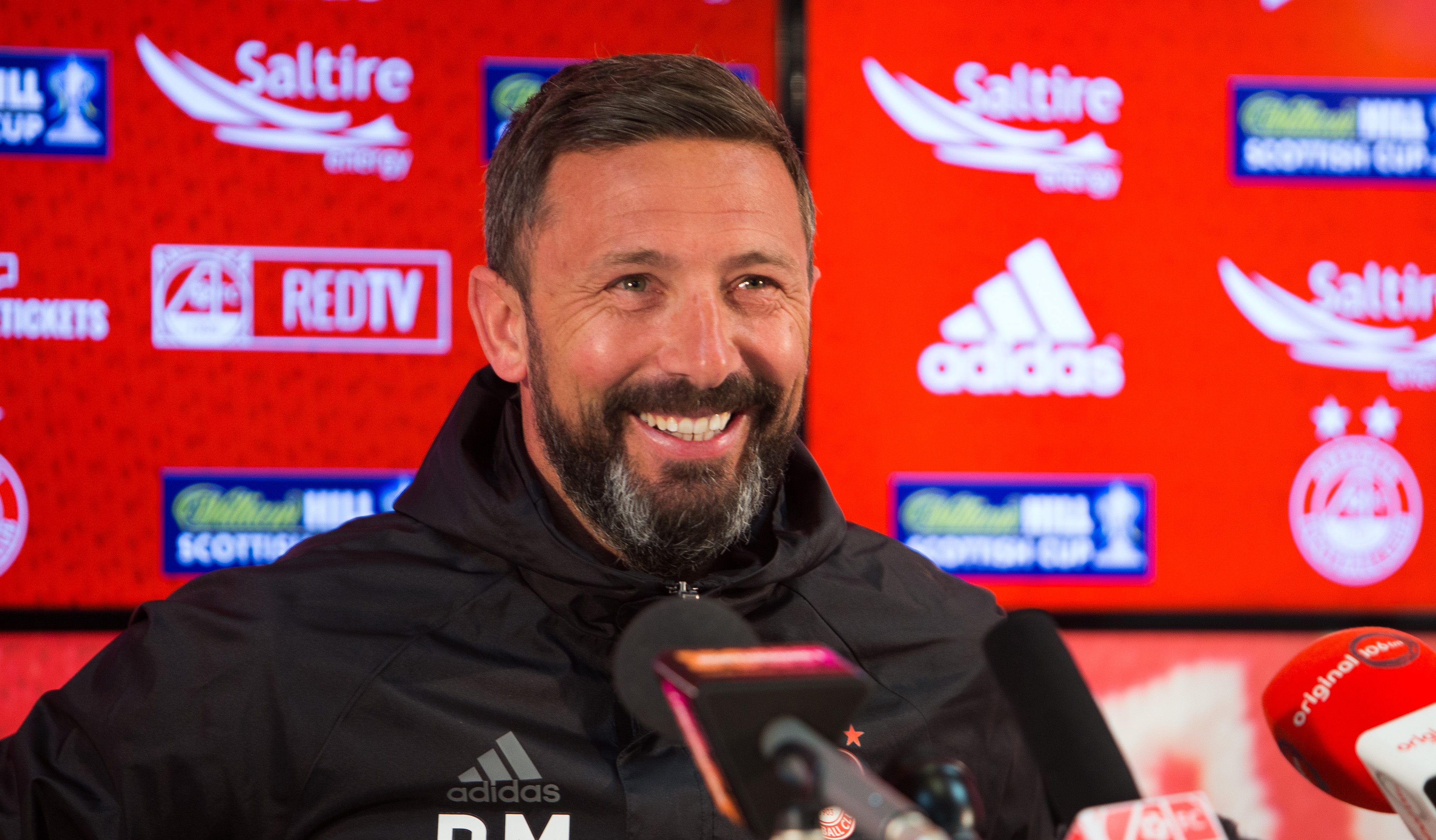 “It is easy to say we will pick up where we left off at the end of December, we have actually got to go and do that now.

“It is important that everyone has that focus on Saturday’s game.

“On paper, our match, a home tie against a League One side, seems a good deal for us but we all know there will be shocks in the cup and we need to ensure we are as professional as we can be. Hopefully we will bring a performance that we are capable of to get us through to the next round which is what it is all about.

“Stranraer have had to change their manager because they are bottom of the league which saddens me. They will think this is a rest bite away from league duties and I am sure they will treat this game the way cup ties should be treated. We have exactly the same mentality going into it and we have to enjoy playing. We have to show our energy and our quality and show our determination to go as far as we can in the cup.

“We lost in the semi-final of this competition the first year I was here. We lost to Dundee away and then Hearts away in the last couple of seasons so the draws have not always been kind to us. Nonetheless it was very disappointing to be put out of the cup without getting a decent run. We say it every season, we put that demand on ourselves to try and get to cup finals and to be 90 minutes away from lifting silverware and the Scottish Cup is no different this year. We are not putting any added pressure on ourselves by me saying that.

“As I say the draw on paper has been kinder to us than in the past, even just being at home is important, we have not had too many home Scottish Cup ties since I have been here. “If we bring a performance that we are capable of then hopefully it will be enough to get ourselves into the next round.

“We did well to get to the League Cup final but we did not play well. We were real underdogs doing into the game against a strong Celtic team but we had to do so much better to give ourselves a chance and we did not do that on the day. I do feel to give ourselves the best chance to lift silverware is by getting to finals and then dealing with the situation and the occasion better, being better equipped from having the experience.

“We have one won and lost one cup final now so we want to have that feeling from winning one again. It is only by revisiting finals and getting yourself familiar with the whole occasion that the players will do themselves justice on the day. Hopefully we can do that this season.

“Not having won the Scottish Cup for so long, it is not a great stat for anyone who has been at the club over the past 27 years. It is important that we try and change that but there will be a lot of managers, a lot of teams who will be saying the same thing. We just need to deal with the first game then see how far we can go. We want to change that stat.

“There has been a lot of speculation with the transfer window being open, but for now we concentrate on the game on Saturday and that is what all the players will be doing.

“Our strength as a team and as a club is our togetherness and stability. We cannot afford to have any distractions and must keep our eye firmly on the job in hand and not get side-tracked about maybe this and that happening.

“The supporters have not seen the team for three weeks so hopefully there will be a sizeable crowd.

“We’re itching to get going again for what is a crucial part of the campaign with the games coming thick and fast.”

Dons progress with a dominant victory

Adam Rooney and Niall McGinn both netted doubles to fire Aberdeen past Stranraer and into the next round of the William Hill Scottish Cup. It was a very convincing performance from a strong Aberdeen side. 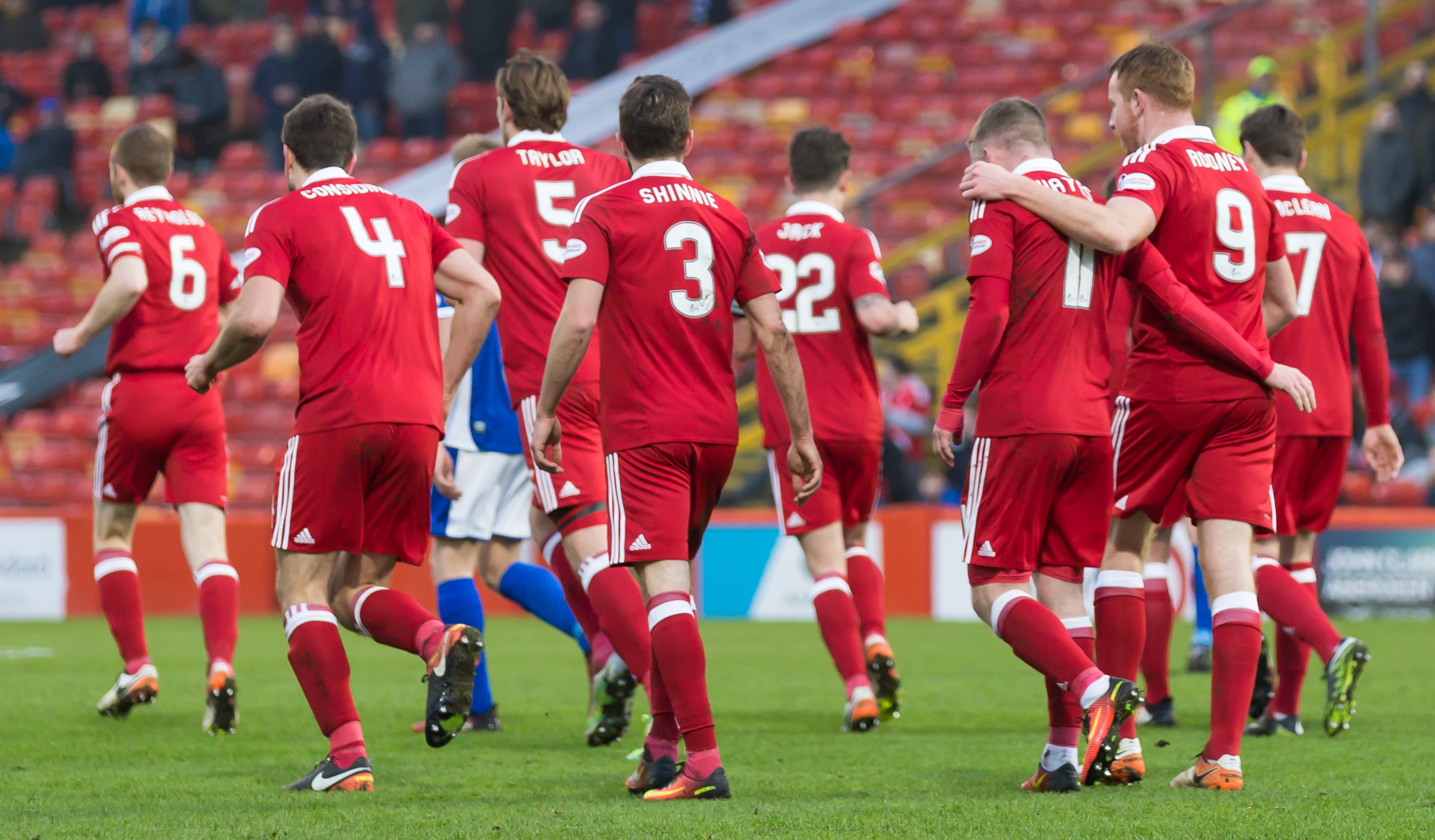 Adam Rooney and Niall McGinn both netted doubles to fire Aberdeen past Stranraer and into the next round of the William Hill Scottish Cup. It was a very convincing performance from a strong Aberdeen side.

The Dons began their William Hill Scottish Cup campaign with the visit of League One strugglers Stranraer. It was a match that Aberdeen were heavy favourites for but the starting line-up signalled that there would no complacency from Derek McInnes and his side.

Joe Lewis retained his place in goal with a back four of Considine, Taylor, Reynolds, Logan in front of him. Jack skippered the side in front of the defence with Shinnie, McLean, Hayes and McGinn looking to link the play to Rooney up front.

Within the first minute of the match Hayes got into the area and picked out McGinn at the back post but he was unable to get the header on target.

In the 7th minute a fluid Dons counter attack brought the ball to Hayes, the winger found half a yard and placed a cross in for McGinn with pinpoint accuracy but Belford was there to palm the ball clear. Stranraer were also keen to get on the front foot early on and forced a good save from Joe Lewis when Willie Gibson fired a low shot towards the bottom corner from 12 yards.

In the next ten minutes some slack passing combined with some unlucky breaks in the final third meant that Belford in the Stranraer goal had a quiet spell. Stranraer were keeping their shape well and committing fouls in the right areas to stop The Dons but the home side were still on top.

McLean burst forward past his man and whipped a low cross into the area on the 24th minute but a Stranraer leg meant a kind deflection into the arms of the keeper.

In the 29th minute Aberdeen made the breakthrough when McGinn floated a ball towards the back post, Hayes attacked it with great tenacity, getting up well and the knockdown fell to Rooney who sent a half volley on the turn past the keeper and into the net. The goal settled the Pittodrie crowd just ahead of the half hour mark.

Aberdeen should have gone 2-0 up when Considine found space from a corner but his header from 6 yards ended up over the bar. Andy had a similar chance earlier on. The Red Army didn’t have to wait too long for a second goal though as McGinn raced through and fired the ball across the keeper from a narrow angle and into the corner of the net in the 35th minute. The winger latched on to a touch from McLean after a long ball from Reynolds and did exceptionally well to find the net.

Stranraer heads looked to have dropped at this point and it could have all fell apart completely for the visitors when Hayes closed down from the kick-off and got himself through on goal, his shot was high across the keeper who saved well. At this stage there was definitely a sense that Aberdeen would go onto make this a very long afternoon for Stranraer. On 36 minutes Reynolds swung over a great ball from the left that was headed on by Reynolds. The ball appeared to be going in until Belford appeared from nowhere to make an outstanding save. Adam played with the keeper when the two of them were at Bury. At half-time thought the score remained 2-0 after a convincing half from The Dons.

After the break McGinn showed intent to add to his tally from the left flank but shot well over before Shinnie tried his luck only to see the effort parried straight back out before being cleared.

In the 49th minute The Dons were handed a great opportunity to make it 3-0 when Neill handled the ball from a cross to gift Aberdeen a penalty which Rooney dispatched confidently into the bottom corner. It was a very well struck penalty.

Minutes later Considine put a ball in for Logan to attack, he headed the ball downwards and on target but once again Belford produced an outstanding stop.

The Dons were beginning to turn on the style and inevitably the fourth goal followed thanks to a wonderful team move. After starting things off in his own half Shinnie received the ball under pressure on the halfway line and did well to hold Gibson off before playing a long diagonal out to Considine who complete a headed one-two with Jack before cutting the ball for McGinn. Niall still had work to do but made it look easy as he fired the ball across goal and into the top corner with a left footed strike from the edge of the area. McGinn looked hungry to add to his double and was unfortunate to see a strike from a narrow angle deflected wide by the keeper for a corner when it looked destined for the bottom corner. Another top drawer save. The match now had an exhibition feel to it as Aberdeen looked comfortable in possession in every area of the pitch.
Jonny Hayes was withdrawn from the action on the hour mark as Pawlett replaced him. There was a standing ovation for the winger who had put in a very effective performance for his side.

At this stage, Aberdeen seemed to take their foot off the gas, content to keep possession without really troubling the Stranraer backline. With twenty minutes remaining Scott Wright replaced Considine as Derek McInnes looked to give the game a bit of spark with the introduction of the youngster who had just penned a two year extension with The Dons.

Wright showed great willingness to run at defenders and certainly brightened things up with his directness. With just under 15 minutes remaining it looked as though Rooney would grab his hat-trick but from very close range he mis-queued a shot and Stranraer scrambled clear. The striker really should have scored.

Wright was joined by fellow AFC Youth Academy graduate Frank Ross as he replaced McLean for the final ten minutes. Both players showed some delightful touches to warm the crowd on a bitterly cold day.

It was a comfortable watch for the Aberdeen supporters in attendance as The Dons controlled the final stages of the match and ultimately kept a clean sheet in a resounding 4-0 victory. Credit to Stranraer who kept their shape and discipline in the closing stages and also a word for keeper Cameron Belford who had a very fine performance.

A good afternoon for the Dons and now onto Dundee on Friday.