Dons Produce Spirited Display to Claim a Point at Ibrox

A superb team performance, full of heart and desire and packed with terrific individual displays from back to front, saw Aberdeen earn a well-deserved point, Ibrox emptying long before the finish. 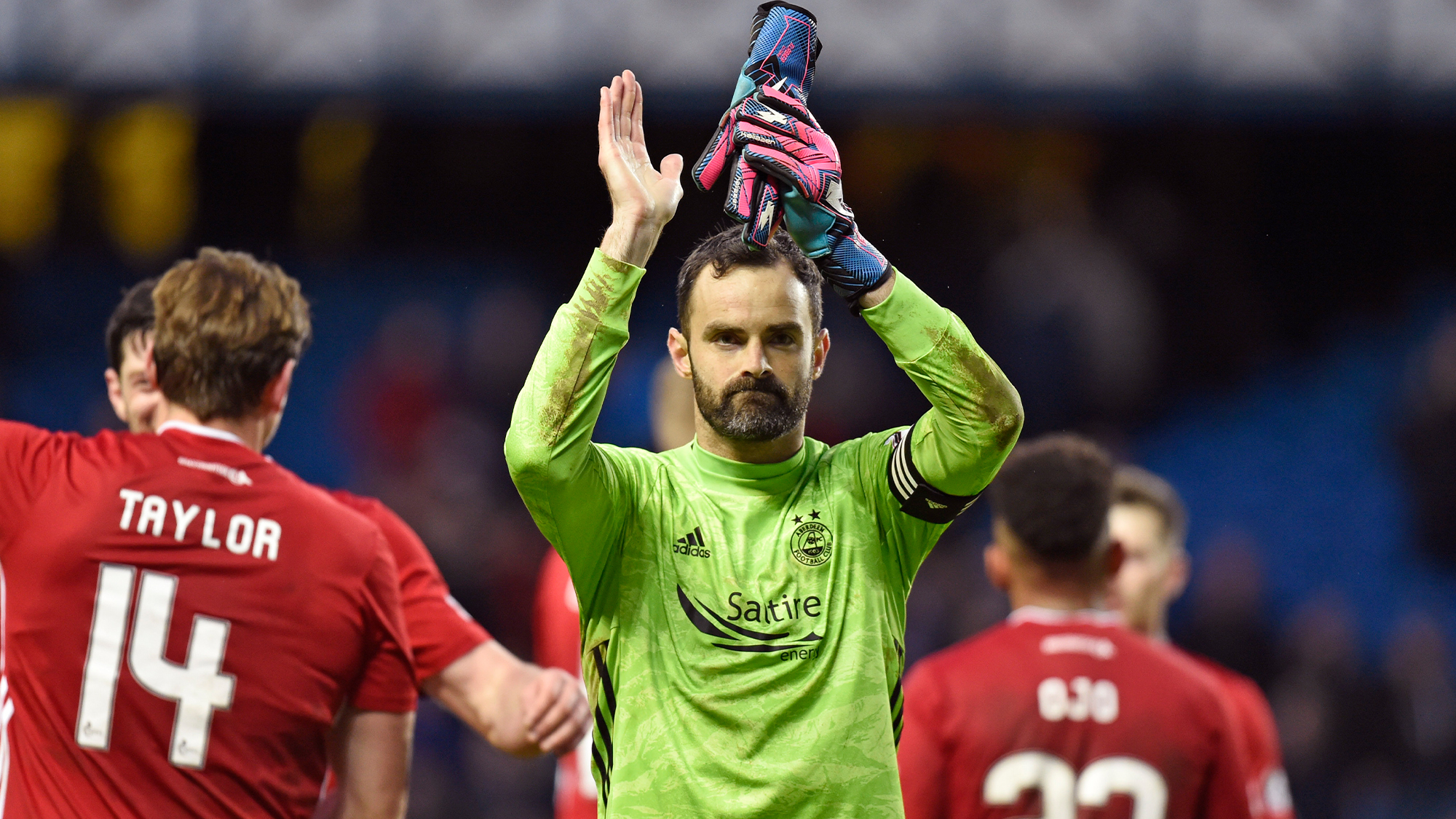 A superb team performance, full of heart and desire and packed with terrific individual displays from back to front, saw Aberdeen earn a well-deserved point, Ibrox emptying long before the finish.

Derek McInnes went for an unchanged Aberdeen starting line-up following the 0-0 draw at St Mirren last Sunday, but there was one change on the bench, new signing Ronald Hernandez joining the rest of the substitutes at the expense of Curtis Main.

The Dons started in sprightly enough fashion, giving as good as they got in a lively opening period, Matty Kennedy immediately looking much more at home in a Dons shirt than at Paisley after a week of training with his new colleagues.

In the fifth minute, the Dons were a whisker away from the lead, Niall McGinn producing a great dummy to beat his man, he then drove in a cross from the right, Sam Cosgrove just a fraction away from getting a crucial touch in the six yard box. It was a great chance.

Rangers had their first sniff in the seventh minute, Lewis Ferguson hauled down in the move before Aribo had a shot blocked wide, a clear free kick for the Dons that the officials missed.

Kennedy was clattered by Polster in the 12th minute, McGinn’s free kick from the left touchline caused chaos, Ferguson got up well for the second ball, producing a clever, looping header that was well tipped over by McGregor.

Barisic was then booked in the 15th for a cynical grab on McGinn as Aberdeen tried to break swiftly, all part of a promising, front foot start from the Dons.

Kennedy wasn’t far away in the 22nd minute, good chest control getting an awkward ball down before curling a dangerous shot from the edge of the box not so wide of the far post.

Aberdeen had defended well thus far, but a lapse from Scott McKenna put them in trouble in the 25th minute, the initial danger cut out as Morelos raced forwards before another poor ball from Shay Logan caused more consternation, Lewis Ferguson booked for a late tackle as he tried clear the danger.

A golden chance for the Dons came and went in the 29th minute.
Katic was caught in possession on halfway, Cosgrove flying towards goal, but a heavy touch from the striker gave McGregor the chance to come off his line and beat him to the ball – a real let-off for the hosts.

Joe Lewis was first called into real action in the 31st minute, a full-length diving save low to his right to push a 20 yarder from Davis wide after patient build up play from Rangers. A decent stop. There were signs that Steve Gerrard’s side was just beginning to find some rhythm, pushing the visitors back but Aberdeen continued to defend well.

A swift break from Rangers, the first real time Aberdeen had been caught out, almost had Morelos in behind in the 38th minute but Ash Taylor got across quickly to block. Great defending. Morelos then took out his frustration by lecturing the referee on why he should have booked Shay Logan a minute later, complete with all the hand gestures. Thankfully, the whistler showed a rather better understanding of the laws of the game than the striker.

Morelos did what he’s rather better at in the 41st minute, a fierce shot from a tight angle causing Lewis problems, the goalkeeper scrambling to collect the rebound at the feet of Arfield. From a corner he then produced a magnificent reflex save at the near post from an Arfield glancing header, a strong right arm hooking the goal bound ball to safety.

That got the Dons into the dressing room all-square at the break after a very sound first 45 minutes in Glasgow, full of well organised, intelligent defending and a determination to get on the front foot whenever they could.

Rangers opened the second half with more urgency, Arfield colliding with Ojo and requiring treatment to a blow to the mouth. The hosts were far more aggressive now, not just on the pitch but in their badgering of the referee.

Arfield was the real threat, quick feet getting him space on the right side of the box in the 52nd minute, Taylor doing well to block his shot wide. The Dons were now pinned back into their final third by the Rangers assault.

Kamara had contracted Morelos’ fractious relationship with gravity in the 54th minute, on the floor after the barest touch from Logan, but the resulting free kick came to nothing as the Dons defended stoutly. Kamara took a real whack two minutes later, Dylan McGeouch rightly booked in consequence.

Morelos was clean through in the 58th minute, collecting a fine 60-yard pass from Goldson but Lewis was off his line quickly to make another fine blocking save with his legs to keep the Dons on terms.

Lewis made another good save from Barisic just past the hour mark, then Goldson got himself a yellow card for moaning to the referee too much after a collision with Cosgrove – McGregor was lucky not to join him after running 60 yards to protest.

A weary looking McGeouch, still not fully up to match speed, made way for Jon Gallagher in the 62nd minute, the game’s first substitution. We then almost had the goal of the season, Taylor driving a low one at goal from 35 yards that seemed to deceive McGregor who initially went the wrong way before grabbing it at full stretch.

Gallagher was only inches away in the 66th minute, Ojo winning the ball and feeding him 25 yards out, his low effort skidding just wide with McGregor scrambling. Rangers then brought on their Ojo to replace Kamara before Arfield became the third Rangers man in the book, copying Barisic’s cynical rugby tackle from the first half, this time on Gallagher as he tried to break in the 68th minute.

The Dons almost took the lead in the 70th minute. A great clearance from McKenna reached Cosgrove. He held the ball up well before finding Gallagher, his low shot from the edge of the box scooped away by McGregor, another in a game full of good saves at both ends.

There was another a minute later, McGinn floating in a free-kick from the by-line, Taylor finding a fine header, McGregor moving swiftly to his left to paw the ball away. McKenna was carded almost immediately for time wasting, Lewis following him into the book for the same reason in the 76th minute.

New signing Hagi was brought on to lift the home crowd in the 77th minute, Arfield surprisingly making way after being Rangers’ biggest threat for much of the game. He was soon to try a shot from distance in the 81st minute, but there was no conviction in it and it troubled Lewis not at all.

Rangers made their final change in the 83rd minute, another new acquisition, Kamberi, on for Polster as Rangers looked for the all-important goal. Kent wasn’t anywhere near finding it, an 85th minute effort from 18 yards ballooned into the crowd.

A double change from the Dons came in the 88th minute, Michael Devlin and Dean Campbell on for Kennedy and McGinn as Aberdeen looked to see the game out.

Morelos somehow escaped his seemingly obligatory yellow card in the first of four added minutes, jumping into Lewis after the goalkeeper had collected the ball, a poor decision from the referee who otherwise had a pretty good game, resisting the pressure put on him by both crowd and home players.

But he hadn’t resisted half as well as the Aberdeen players who saw it through to a second successive goalless draw, but one that was altogether more satisfactory than the one at St Mirren a week earlier.