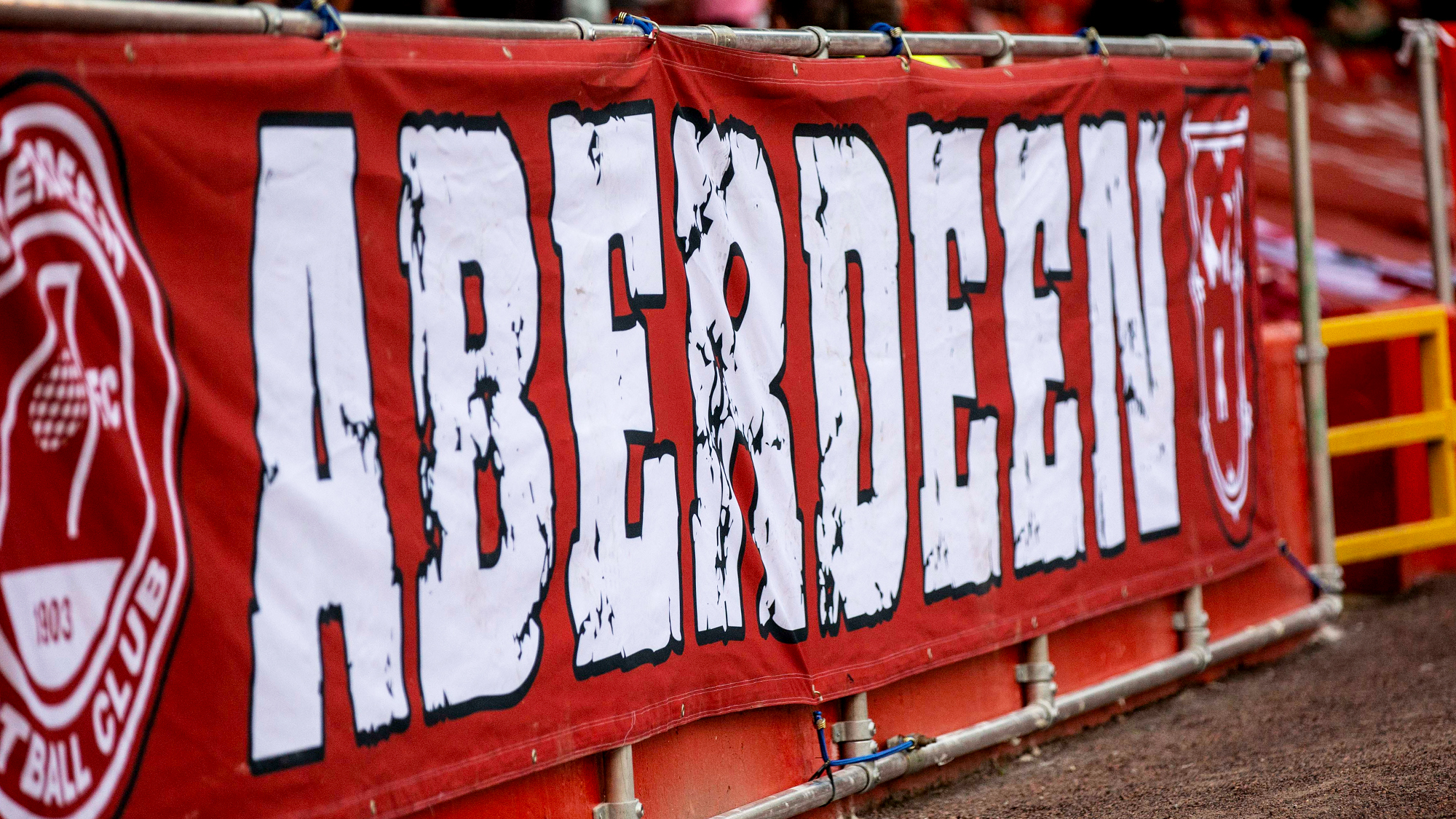 Aberdeen round off their Premier Sports Cup Group A matches this Sunday when we host Raith Rovers at Pittodrie.

The Dons go into the game off the back of a 5-0 victory over Stirling Albion on Tuesday evening. A double from Vicente Besuijen along with goals from Christian Ramirez, Ross McCrorie and a superb Matty Kennedy free-kick giving us all three points at Forthbank.

Aberdeen have won their other two games, against Peterhead and Dumbarton, by a 2-0 score line . A double from Christian Ramirez gave us victory at Balmoor Stadium and goals from Ross McCrorie and Matty Kennedy gave us all three points against Dumbarton at Pittodrie.

The Dons sit top of Group A on nine points, while Raith Rovers are a place behind on six points, albeit Aberdeen have a better goal difference.  Jim Goodwin’s side will qualify as group winners for the knockout stages if they avoid defeat on Sunday.

“This isn’t a competition that I take lightly. I want another clean sheet, I want us to go and entertain our home fans at Pittodrie and put on another display like we did in the first half against Stirling Albion. I want us to keep the foot on the gas for 90 minutes and really kill teams off.” – Manager Jim Goodwin. 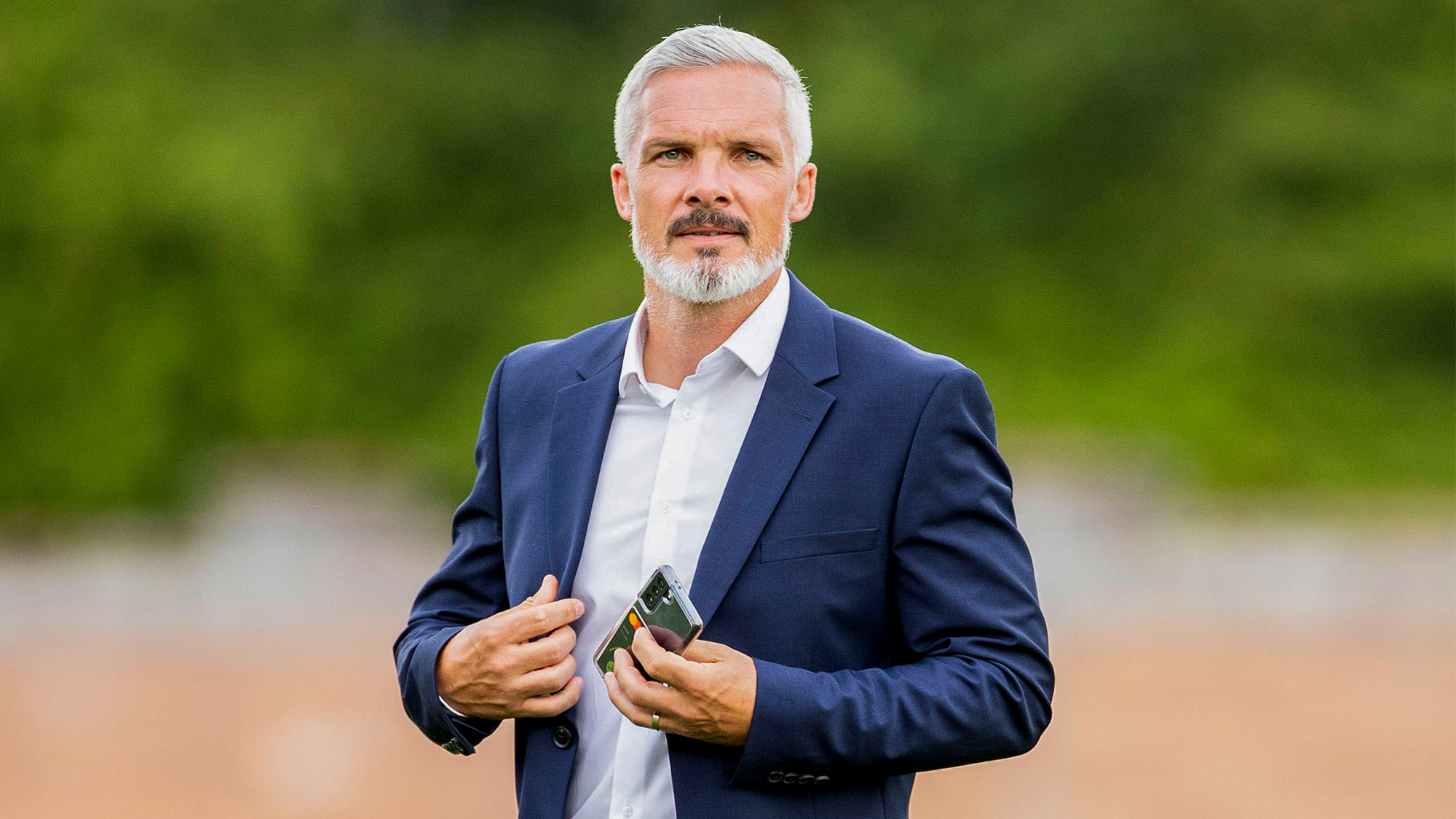 North Macedonian striker Bojan Miovski could make his debut on Sunday after finally arriving into Aberdeen late on Thursday evening. Our summer signing from MTK Budapest trained for the first time at Cormack Park on Friday morning.

Sunday’s game will come too soon for Connor Barron and Jack MacKenzie. Connor is expected to be out for a few weeks while Jack should be back training with the first team squad after Sunday’s match.

Ian Murray was appointed as the new manager at Stark’s Park in the summer, replacing John McGlynn who left to join Falkirk. It has been a positive start for the former Airdrie manager who has overseen an unbeaten start to their Premier Sports Cup campaign with one victory and two draws. They defeated Peterhead 6-0 in their opening group match and drew 1-1 with Stirling Albion and 0-0 with Dumbarton. The Stark’s Park side picked up a bonus point after defeating Dumbarton on penalties but failed to pick up the extra point against Stirling Albion after they lost the penalty shoot out.

There will be a familiar face in the Raith Rovers squad this weekend as former Aberdeen player Ethan Ross returns to Pittodrie. The winger, who was a product of the AFC Youth Academy, was named the AFC Development Player of the Year for 2018/19 and made twelve appearances for the first team, including two starts. 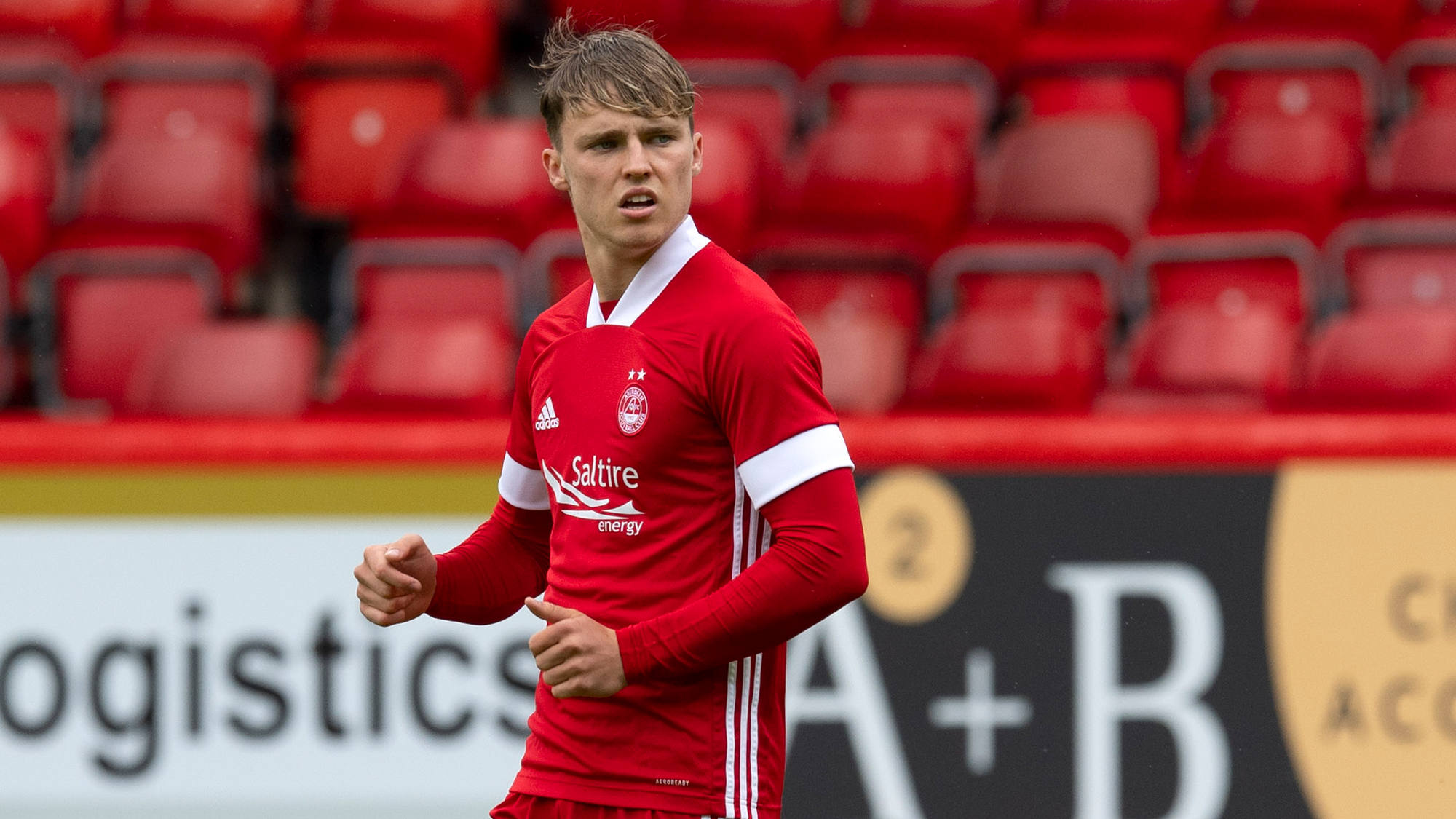 Sunday’s Red Matchday is a special edition as we pay tribute to the late Davie Robb. The programme will be available to purchase from around the ground on Sunday, from the club shop and online. For a full preview, please click here. 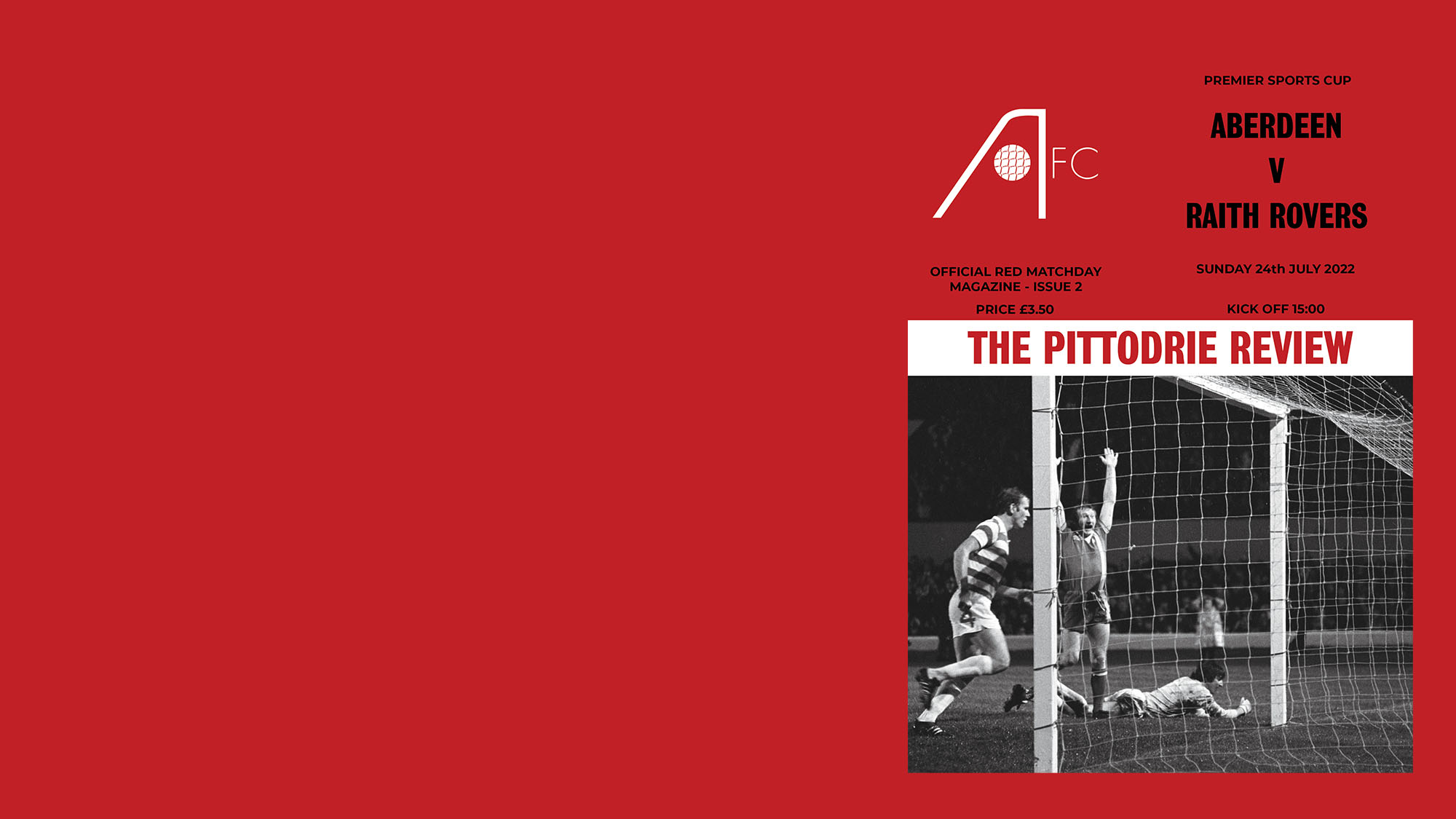 Where Can I Watch?

The draw for the last 16 of the Premier Sports Cup will be made at Pittodrie on Sunday, July 24.

It will be broadcast live on Premier Sports following their coverage of Aberdeen v Raith Rovers, kick-off 3.00pm.

The eight seeded clubs in the draw will be European representatives Celtic, Rangers, Heart of Midlothian, Dundee United and Motherwell, plus the three group winners with the best records.

Ties are scheduled for the midweek of August 30/31 and are subject to TV selections. 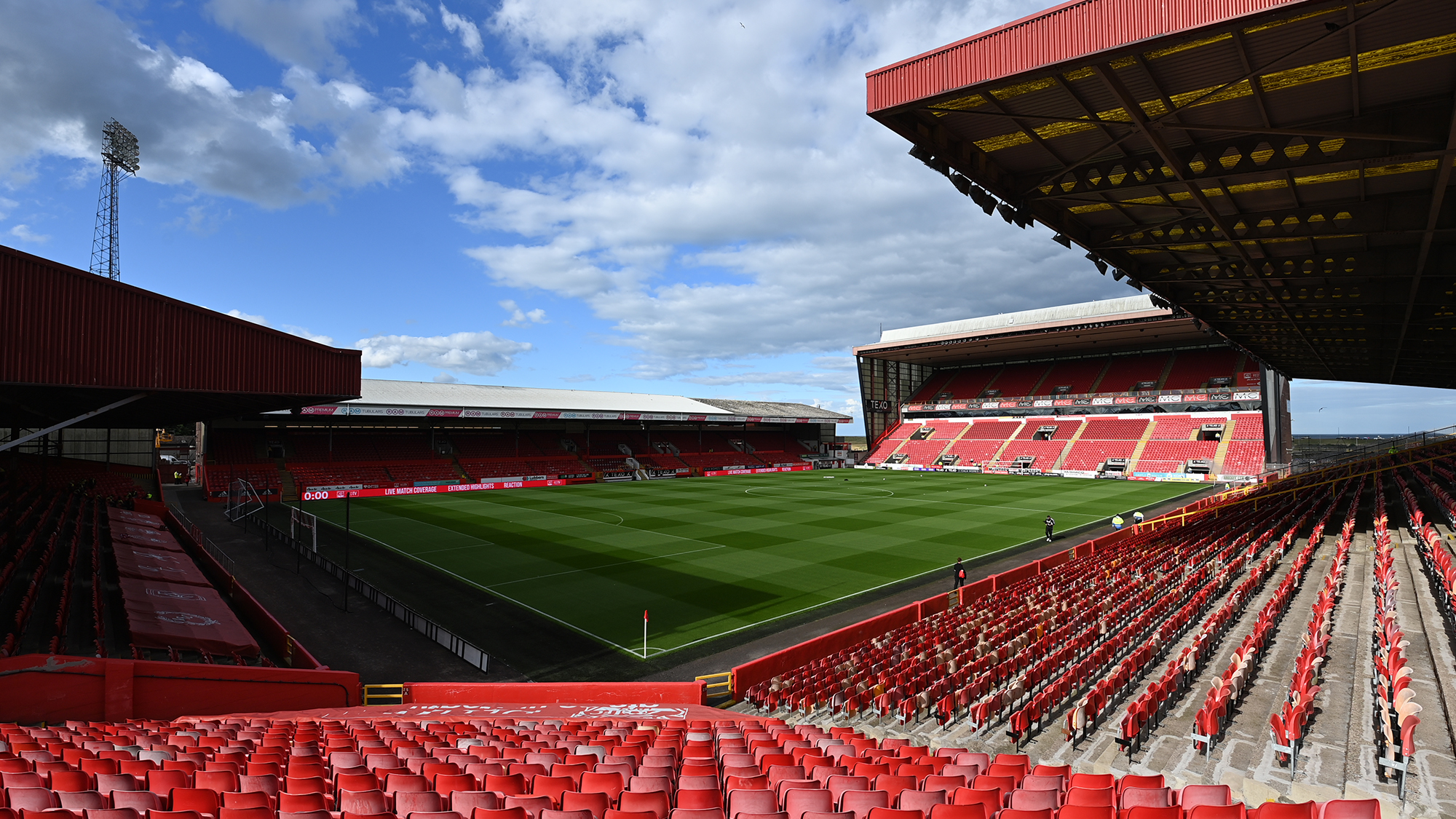 Dons make it four out of four

A 3-0 win for the Dons saw then complete a clean sweep of points and clean sheets from the Group stages of the Premier Sports Cup, top the group and put themselves into the knockout phase of the competition.

There was an Aberdeen debut for Bojan Miovski against Raith Rovers, coming straight into the side on his arrival in Scotland. He was the only change from the 5-0 win at Stirling Albion with Christian Ramirez starting from the bench.

Two changes for Raith following their 0-0 draw at Dumbarton in midweek, Robbie Tomson featuring in goal in place of Ross MacDonald and Dylan Easton replaced by Aaron Arnott.

The Dons were given a golden chance to make a great start to things when they won a penalty after five minutes. Miovski cleverly got himself back onside during an attack and, as a result, was then hauled down by Stanton when clean through – Stanton was booked for the foul. Up stepped Miovski to thrash the spot kick into the top corner for 1-0 – you don’t get many more emphatic penalties than that.

Raith weren’t far away from getting back on terms on 12 minutes, Rovers working the ball back into the box after a corner, Gullan prodding the ball right across the face of goal and just wide of the far post. Five moments later, Dick slung a low cross through the six yard box, just in front of the lunging Gullan. Aberdeen had been sloppy in possession in midfield and giving the ball away too cheaply in this phase of the game.

Gullan was the threat again on 22 minutes, a quick turn getting him a yard of space away from Liam Scales to fire off a shot at goal, Kelle Roos tipping it over at the near post.

Matty Kennedy redressed the balance on 24 minutes, driving down the right and crossing to the back post. Jonny Hayes turned it goalwards but Berra was on hand in the six yard box to clear.

Another skirmish following a Ross free-kick almost brought Raith level on 31, Zanatta twisting into space and firing off a low shot that clipped off Anthony Stewart and ricocheted just wide.

Vicente Besuijen had the crowd on their feet on 35 minutes, a meandering run forward, followed by an interchange of passes with Miovski and from 25 yards out, his ferocious shot was only just over the bar.

Ross McCrorie was fractionally more accurate on 39, and that was all that was needed to double the lead. Collecting the ball in the centre circle he advanced a dozen yards before unleashing a swerving, dipping shot from 25 yards that clipped the underside of the crossbar and flew in. 2-0 was a little harsh on Raith, but few inside Pittodrie were complaining.

Scales nearly had his first Aberdeen goal with a minute to go, his header from Hayes’ free-kick scooped away to safety by Thomson, the last real action of the half.

The Dons surely sealed the game in the opening minute of the second half when Hayes made it 3-0. Besuijen played a path in behind the defence. Miovski was offside but sensibly left the ball all alone, leaving Hayes to sprint onto it. From there, he buried the ball into the bottom corner having drawn the goalkeeper from his line.

Thomson kept things respectable for Rovers a minute later. Besuijen dummied to leave the ball to run through for Miovski, accelerating on to receive the return ball. From a dozen yards out, he fired at goal, Thomson making a fine save to his right.

The Dons were on song now, Kennedy slaloming through the Raith rearguard before finding Mason Hancock whose low cross was hacked to safety after 52 minutes. Four minutes later, Arnott was replaced Easton for the visitors. Aberdeen made their first switch on 59, Hancock and Miovski replaced by Ramirez and Luis Lopez, McCrorie going to centre-half, Scales to left-back. More changes came when Gullan made way for Mitchell on 68, Aberdeen responding by bringing on Ryan Duncan for Hayes as the game began to drift towards its seemingly inevitable conclusion. On 73 minutes, Marley Watkins and Dante Polvara replaced Kennedy and Besuijen.

Lopes found top gear on 77, accelerating away down the right and crossing for Ramirez. The ball was slightly behind him, the American manufacturing a volley that flashed over, albeit that the offside flag had gone up.

Ramirez was denued what would have been a legitimate goal with ten minutes to go. Jayden Richardson got to the by-line and stood up a fine ball to the back post. Ramirez threw himself out a bullet header which looked destined for the back of the net, Thomson finding a strong right arm to divert the ball to safety, an excellent save.

Rovers made a couple more changes on 82, Mahady and Coluson coming on for Zanatta and Connolly. Moments later there was a coming together between Richardson and Coulson that spilled over into some pushing and shoving between the sides. Richardson was booked for his part in it, as was Dick for taking part in the afters.

Lopes went on the chase of a long ball forward on 87 minutes, Thomson just able to pip him to the ball on the edge of the box. At the other end, Rovers were still pushing for a consolation, Stewart booked for a crunching challenge on Easton on the edge of the area. Ross stepped up to take the free-kick but he put it over the bar.

Ramirez was through on goal in the final minute in a position similar to Hayes’, but the ball stuck under his foot and he ballooned the ball into the crowd, the game’s final action.