“The international break is what it is. Sometimes you are working towards it and could do with the break but after four wins on the spin, which is not easy to do, the break probably came at a bad time for us given the momentum we had built up in the run-up to it. 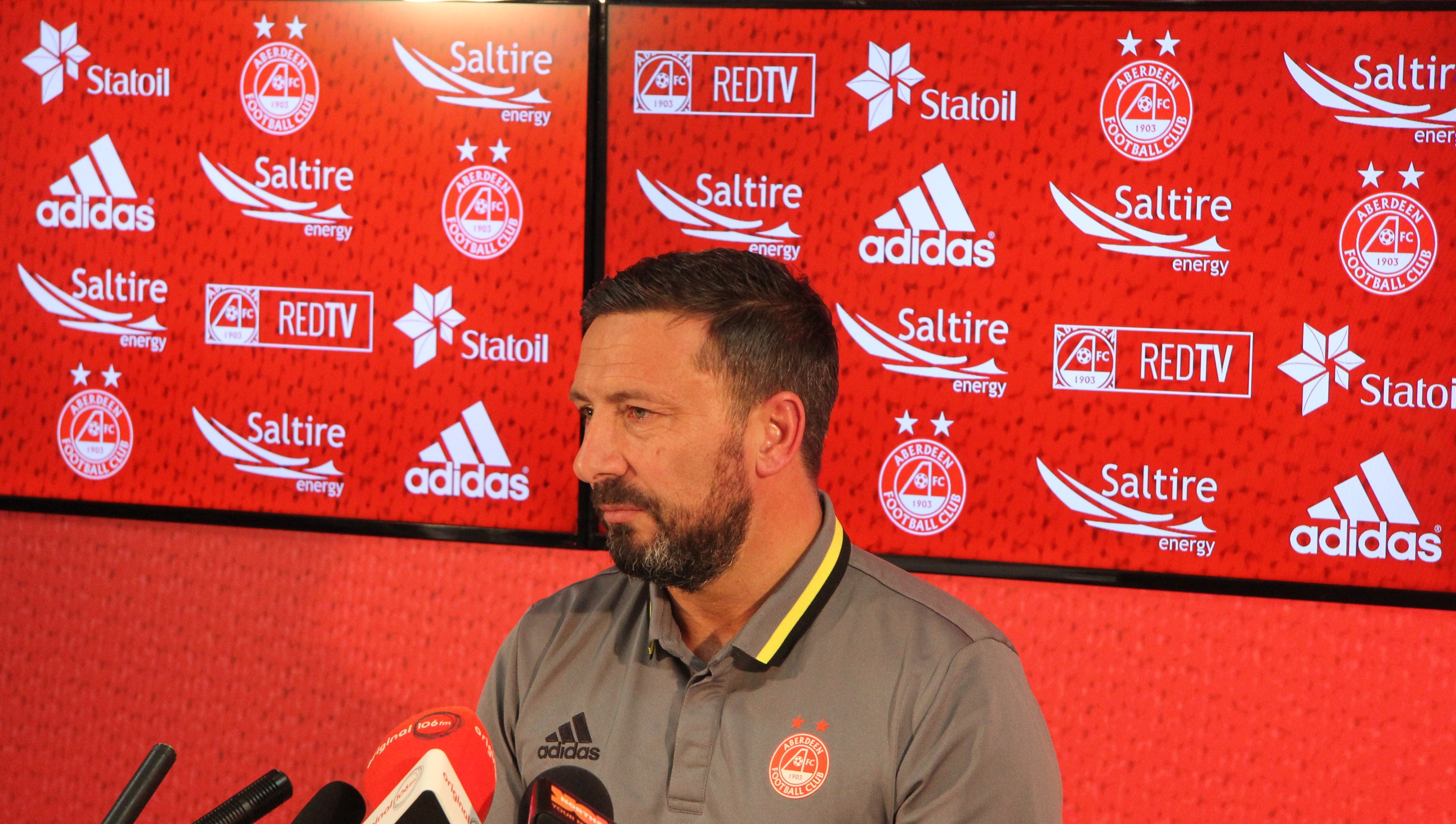 “The international break is what it is. Sometimes you are working towards it and could do with the break but after four wins on the spin, which is not easy to do, the break probably came at a bad time for us given the momentum we had built up in the run-up to it.

“We are feeling good about ourselves as a team.

“We are glad we have got our international boys back safe and sound. Some contributed more than others but they are back with us now and we look forward to hopefully trying to pick up from where we left off. We got into a good rhythm, got our killer instinct and the performance against Kilmarnock was terrific from start to finish. I was so pleased with everything from start to finish and to score four goals away from home was really pleasing.

“The form helps us but it does not guarantee us anything against Ross County because they are a good team. Whilst last time out they had a disappointing result, their last two away performances at Hearts and Rangers where they got two draws, shows their confidence and capability going away from home.

“Ross County have a lot of experience and they have a good manager. They will be well organised and they will fancy themselves to come here and get a result. It is a challenge we have overcome before and hopefully we can keep winning our home games. It is important to keep that momentum going into the semi-final.

“So we have it all to do again but we have shown in the past we are a team that can go on a good run, strong runs. Normally those types of runs separate us from the teams behind us. We need to keep winning games and hopefully we can do that on Saturday.

“I said that when we beat St Johnstone in the quarter final it was important to knuckle down in the league so we went into the semi-final in good form and that is still the case.

“I am pleased with what the players are giving us at the moment. I am pleased with the level of performance. Some are finding their form and that in turn has helped us get the results we have had. But we want another one. We want to win our homes games. We feel strong at home.

“Ryan Jack will miss Saturday but he is on schedule. He will go and see the specialist next week to get the all clear. He is running really strongly at the moment and is doing every aspect of his work apart from joining in with his team mates.

“We would like to get him back with us next and if he keeps working as hard he has a chance. The medical staff have done a great job with him and he has applied himself really well. So hopefully we will have Ryan and also Scott McKenna, who is the only other player missing on Saturday, back with us on Monday or Tuesday.”

Dons make it five wins in a row

Aberdeen came into the game looking to make it five wins in a row, and having dismantled Kilmarnock a fortnight ago they unsurprisingly lined up unchanged. 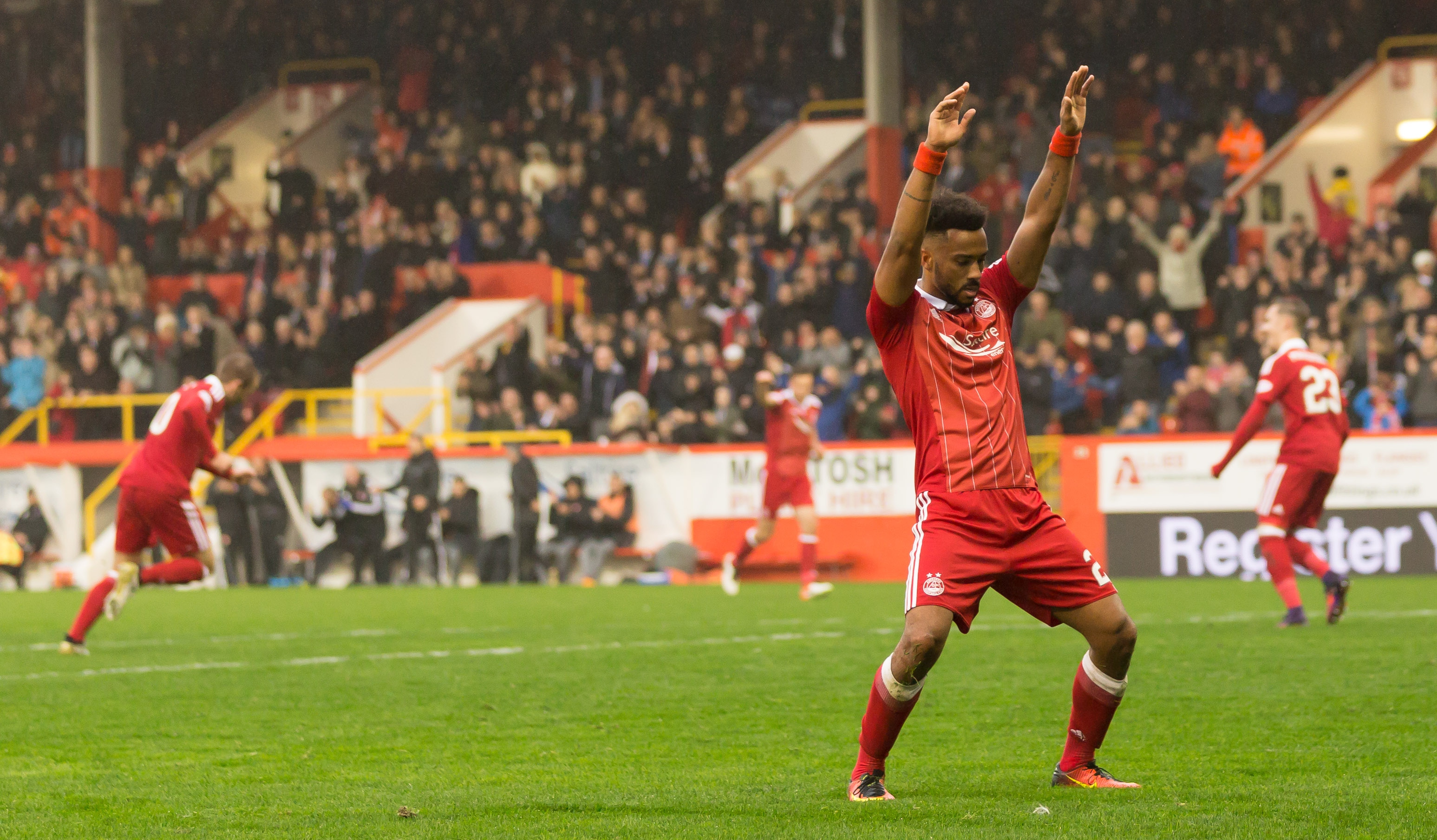 Aberdeen came into the game looking to make it five wins in a row, and having dismantled Kilmarnock a fortnight ago they unsurprisingly lined up unchanged.

The conditions at Pittodrie were tricky with plenty rain falling before kick-off. The Dons had played well on the sticky 3G pitch at Rugby Park. How would they fair on a slippery surface?

After six minutes the Dons were forced into making a substitution with Ash Taylor coming off to be replaced by Mark Reynolds.

The home side were lucky not to be a goal down after 15 minutes, when Kenny McLean's misplaced pass was picked up by Craig Curran, but his shot was fired straight at Joe Lewis from inside the penalty box.

At the other end of the pitch Jonny Hayes crossed a free kick into the box, which was converted by Adam Rooney. Unfortunately the celebrations were halted when the assistant's flag went up ruling the Irishman offside. Looked a very tight decision.

Rooney came close to opening the scoring again five minutes later after a great chance which came from a Niall McGinn cross. Adam's header was inches over the bar. It was a good opportunity missed but the Dons were beginning to take hold of the game.

Just seconds later the deadlock was broken when Jonny Hayes took the initiative and tried a solo effort, dribbling his way into the box off the left wing before firing an unstoppable shot into the roof of the net. Jonny had been left one on one with full back Marcus Fraser and he left the County player for dead.

Things went from bad to worse for Ross County very shortly afterwards, when Tim Chow was sent off for a bad challenge on Jonny Hayes. The reaction of the County player suggested he knew it was a red card. Craig
Thomson got the decision spot on. It was shaping up to be a long afternoon for Jim McIntyre's men.

It was nearly 2-0 after 27 minutes when a fantastic James Maddison corner was met by the head of Rooney who put the ball straight at Scott Fox. Either side of the keeper and it was a goal.

But three minutes later, it was indeed 2-0. Maddison was involved again when he lifted the ball into the box from the left hand side. Once again Adam Rooney was on the end of it and once again Scott Fox was alert to it and made a fine save. However, the keeper could only knock it into the path of Shay Logan who tapped in from six yards.

Aberdeen were good value for their two goal lead at this stage.

But then they slackened off towards the end of the half and Ross County nearly got themselves back in the game seconds before the half time whistle when Michael Gardyne hit the crossbar from inside the penalty area. Aberdeen were perhaps lucky to go into the break having not conceded. Gardyne minutes before that had forced Lewis into a good save.

Aberdeen started the second half on top with the lion's share of possession.

Rooney was unlucky when he produced a neat turn on the edge of the area but the ball just ran away from him. Shay Logan then had an effort from inside the box after a sweeping move. McLean found the right back with a deep cross and the right back did very well to create an opening but his low shot was saved by Fox.

It was not all one-way traffic, just before than County had a free kick in a dangerous area. A well worked move saw Davies head the ball back into the six-yard box but Niall McGinn of all people was well position to clear the danger.

Then the vistors had a corner which Aberdeen faield three times to clear. Eventually when they did they broke at pace but McGinn just failed to pick out the run of Rooney.

On the hour mark Logan played in McGinn who tried to find Rooney with a through ball but his pass was just over hit. The Dons then put a good move together and the ball fell to McGinn at the back post. His initial shot from inside the six yard box was saved and then when he went for the rebound he appeared to be tripped but nothing was given. The move was kept alive but Hayes fired wide.

Then again on the break Hayes found McGinn but his shot was saved by Fox who had his angles spot on. The County keeper had a fine game today.

On 67 minutes Aberdeen made the game safe. A good little move saw Shinnie play the ball to Logan and his clever cut back found McGinn. Niall took one touch before placing the ball beyond Fox. A really neat finish.

Derek McInnes brought on Peter Pawlett and Jayden Stockley for Adam Rooney and Niall McGinn. Being 3-0 ahead, the manager embraced his chance to rest key players ahead of next week's Hampden showdown with Greenock Morton.

With County now beaten, Aberdeen looking for more goals and the Dons went on the offensive. On 78 minutes another fast paced move saw Jonny Hayes hold the ball up for Jayden Stockley who took the ball to the left winger and fired the ball across goal to make it 4-0. Another very good finish.

The final stages of the game were played at a good tempo. You could tell just how refreshed the team was after the international break. One final chance in the last minute, Stockley rose well to head against the bar and before Considine fired just wide.

Having scored eight goals in the last couple of games – the first time that has happened since 1992 – and winning 5 games on the bounce Aberdeen can go to Hampden next week full of confidence.