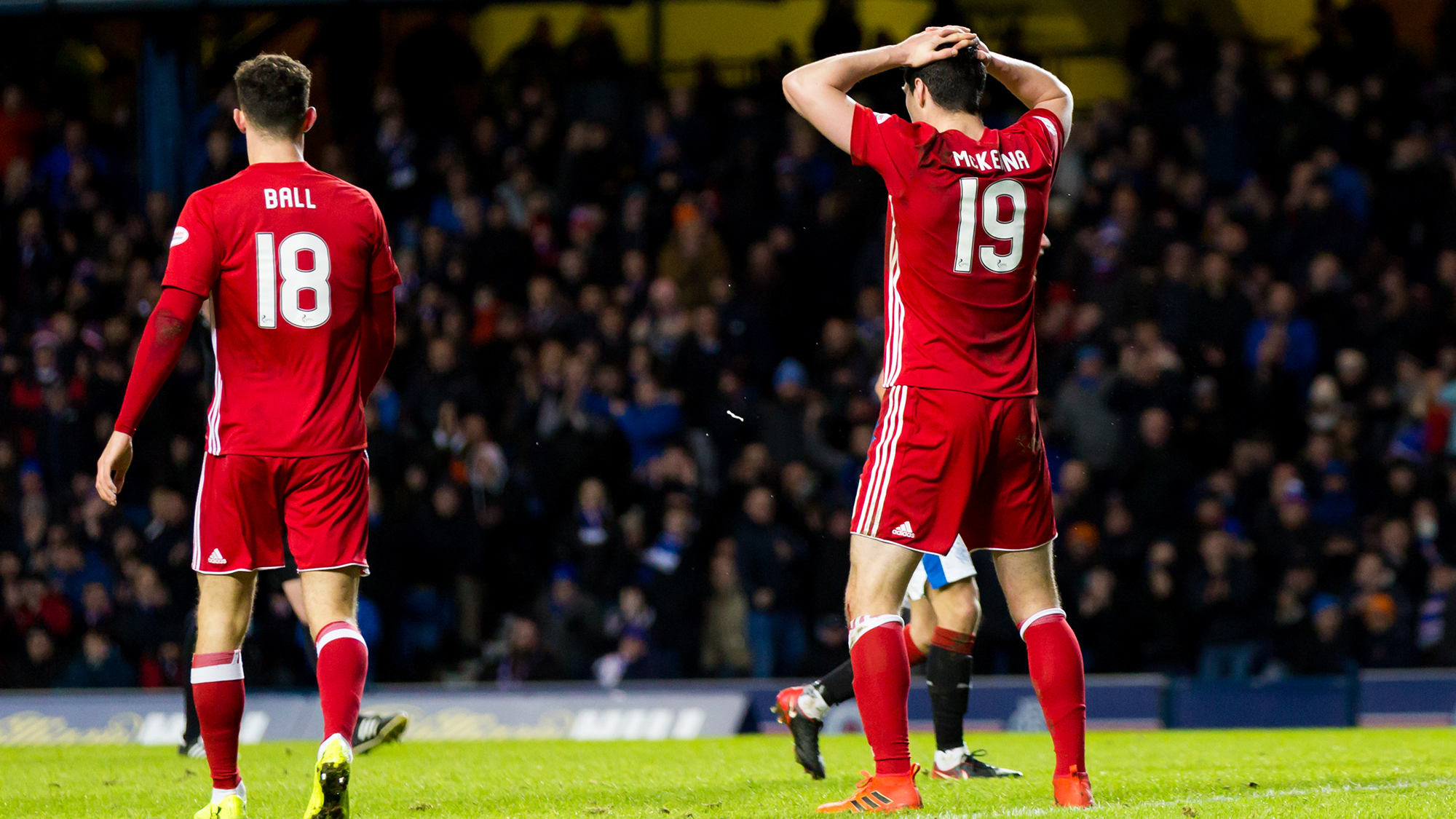 Derek McInnes made one change from Saturday’s resounding win against St Mirren in the Scottish Cup with Scott McKenna, back in after suspension, replacing Mark Reynolds. Ryan Christie shrugged off a knock, which had threatened to keep him out of the match so Aberdeen were nearly full strength. Stevie May did not make the squad. Although the Dons were competing in their second game since the winter break, Rangers were yet to play as their weekend cup-tie at Fraserburgh was called off.

Last time at Ibrox, The Dons were well beaten, but had responded well in the following weeks and went into the game three points ahead of their opponents.

The game kicked off in a noisy Ibrox and Aberdeen won a corner within the first 90 seconds. Declan John thought he was guiding the ball out for a goal kick, as did most of the stadium, but the linesman on the near side gave a corner. Greg Stewart took it, but new signing Russel Martin headed clear.

Josh Windass was first to have a go at goal on 5 minutes, but his shot skewed wide of Joe Lewis’s right hand side. The early exchanges were fairly low key as both teams tried to adapt to what looked like a difficult pitch. The homes side then forced a corner, which new signing Sean Goss took. Aberdeen failed to clear and the ball was shielded back to Windass and his low effort from just inside the box was deflected onto the post and bounced back into the grateful arms of Joe Lewis.

Rangers were having the bulk of the possession and The Dons gave away a cheap free kick in a dangerous area on the right. The Dons defended well this time and McLean managed to break away on the counter, but it would come to nothing. Rangers should have taken the lead in the 19th minute as a ball in from the right was met by the unmarked Morelos, but his header went wide.
Kenny McLean had the first Aberdeen shot at goal, but his long effort went way over the bar as the visitors tried to get a foothold in the match. The Dons were set up well at the back and forced Rangers into patient build up or shooting from distance. Aberdeen then passed up a big chance to take the lead in the 27th minute. Good play from McLean and Rooney in the Rangers final third allowed Kenny to slip a ball through to Gary Mackay-Steven, but Foderingham was alert to block the first time shot.

The Dons would pay for that miss as Rangers took the lead minutes later. Rangers went on the attack once again on the left and Tavernier’s low ball was cleared into the stands by O’Connor. Another ball was punched clear by Lewis but Candeias picked up the ball and managed to whip a dangerous cross into the back post from the right and Morelos lost Logan to head into the empty net, giving the hosts the lead.

After the restart, The Dons immediately went searching for the equaliser and Kenny McLean forced to Foderingham into a smart stop. It was another good opportunity missed. Aberdeen had responded well, and were starting to ask questions of the Rangers defence, but the hosts were doing enough to keep the reds out.

Andy Considine gave away a free kick in the final minute of the first half and picked up the game’s first yellow card. Bobby Madden booked Andy Considine after the defender slipped bringing down Windass. The free kick was another dangerous one and thankfully went all the way through and out for a goal kick although Bates was not far away from getting a touch.

Rangers went into the break 1-0 up, but Aberdeen were very much in the game.

The second half restarted and Mackay-Steven forced a corner within the opening minute after some good skill down the left. Stewart’s ball in was poor though and Rangers cleared. Stewart then put a better delivery in from a free kick, but McLean headed well over.

Joe Lewis was then forced into a stop in the 48th minute after Morelos held off O’Connor. With his back to goal he fired a low shot that Joe had to tip away and Aberdeen were able to dig it out.
Scott McKenna was then booked for bringing down Morelos as he went through on goal. The Rangers fans were incensed Scott never received his marching orders, but there was cover from an Aberdeen defender.

In the 58th minute Declan John latched onto a ball on the left and his cross was deflected. Lewis was scrambling and could only tip to the back post, where Morelos volleyed wide. Niall McGinn replaced Greg Stewart as Derek McInnes instilled some fresh legs onto the wing.

The wet pitch, which was cutting up badly, was making things very difficult for both teams and Kenny McLean slipped at the edge of the centre circle and that send Rangers on the break. The ball was played back to Morelos and he sliced a shot onto the roof of the net.

Rangers were looking for the vital second goal and they nearly got it when Windass’s deflected effort was heading in, but Joe Lewis made an acrobatic save to tip over the bar. It was an excellent stop from Joe, who showed great feet to scramble back onto his six-yard line.

At this stage Aberdeen huffed and puffed, but they struggled to get into any dangerous areas.

Mackay-Steven was replaced by Dominic Ball on the 74th minute as the manager made a tactical change. But within seconds Rangers then won a penalty as O’Connor allowed Windass to get behind him. Lewis was judged to have caught the Rangers man and the referee pointed to the spot. Replay’s show O’Connor clearly got a touch. Also Windass’s leg and O’Connor had collided with the keeper. Joe looked it a lot of trouble and after lengthy treatment on the field was replaced by Danny Rogers who made his debut. His first task was facing the long-delayed penalty kick from Tavernier. The Rangers right back sent Danny the wrong way and it effectively killed the match off.

Aberdeen will then wonder how on either they failed to find the net to give them a lifeline.

Rangers had their goalkeeper to thank three times in the space of 60 seconds. First Rooney was denied from close range after shooting straight at Foderingham then from the corner McKenna was denied with an outstretched leg. The second corner was met by a bullet header from O’Connor and Foderingham parried away again.

They continued to press for a way back into the game and McLean was slipped in by Shinnie. He tried to cut it back to Rooney, but the ball was cleared off the line.

Graeme Shinnie was then booked for another tackle. The captain was rightly furious with the referee. He will now face a suspension.

There were six minutes added on at the end of the 90, with Joe’s injury being the major factor for the extended time. The Dons were finishing stronger and another save from Foderingham, this time from Shinnie, was followed up by a goalmouth scramble but Rooney couldn’t force it in.

The keeper made some fine saves but Aberdeen really should have put away at least one of the chances.

The final effort of the match came from Kenny McLean, who’s dipping shot went over and shortly after Bobby Madden blew the final whistle. Aberdeen showed plenty of fight about their performance, but didn’t create enough until late on. The main concern though for the team tonight will be the injury to Joe Lewis.

Aberdeen return to Pittodrie on Saturday against Kilmarnock.