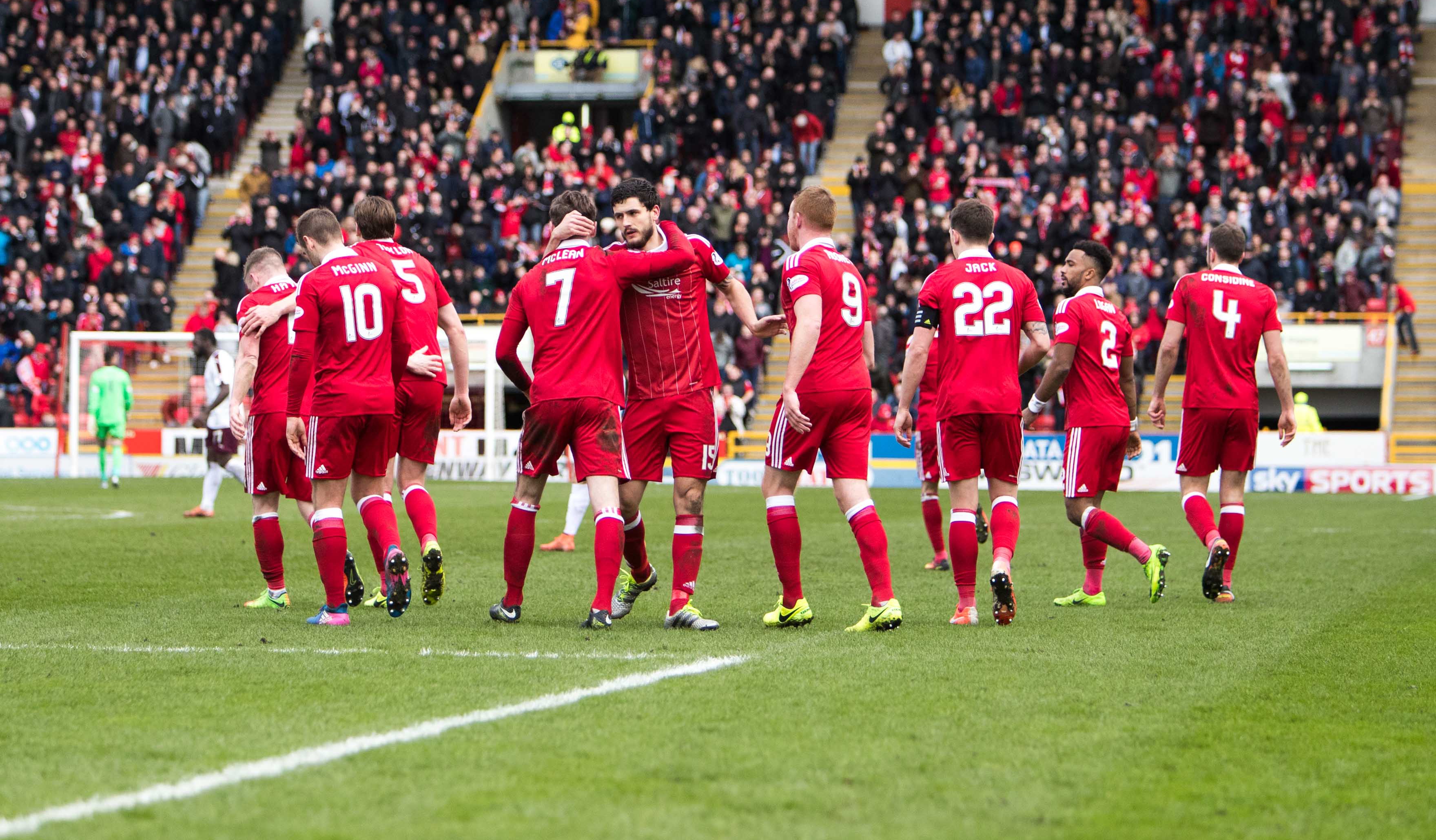 There was one change from the starting XI that beat Motherwell in a dramatic game at Pittodrie the weekend past. Andrew Considine came back from suspension to replace Jayden Stockley.

It was a promising start. Inside the first minute Jonny Hayes took the ball for a run forward. Fans in the Richard Donald Stand were appealing for hand ball, but only a corner was given. Another corner followed Hayes' effort but both came to nothing.

A few minutes later Jonny came close again, skipping past two defenders inside the area. Jonny did really well managing to get to the line, however he was crowded out and could only knock the ball off Rooney for a goal kick.

Then at the other Sam Nicholson cut in off his left wing and forced Joe Lewis to tip the ball over the bar. It was a lively start from both sides, but the Dons looked more aggressive going forward.

Nicholson then had the best chance of the match after 15 minutes when Goncalves won the ball in a promising area. Shay Logan's wonderful interception cut out the danger temporarily, but the ball was squared to Nicholson who curled the ball over the bar from inside the box. Although Shay did well to close him down, he really should have scored. It was the only time the Dons defence looked troubled all afternoon.

Aberdeen's early dominance was rewarded after 21 minutes when Niall McGinn's quality cross from the left found Shay Logan who ghosted past the Hearts defence to head home in the six yard box. On his 150th appearance for the club, the self declared “Fox in the Box” made no mistake after making a great run. He then continued it as he sprinted the length of the pitch to celebrate!

The Dons, who were doing a great job of pressing Hearts high up the pitch, were also be now winning all of the second balls. The Dons kept whipping early balls forward, playing in good areas. Hearts, who were trying to play football out of the back, were forced to play it long but Taylor and O’Connor had got to grips with Goncalves.
Aberdeen continued to be well on top but despite a number of dangerous crosses they could not work another clear opening, only having a few half chances in and around the area.

As half time approached, the Edinburgh side then had a good little spell of possession and were unlucky when Goncalves was ruled offside when through on goal. Replays showed that he was marginally on, but his shot came to nothing anyway.

The opening 45 minutes would have pleased Derek McInnes greatly with plenty of positive, attacking football and the work rate from everybody in a red shirt.

The Dons started the second half brightly and were desperately unlucky not to double their lead after 47 minutes when Adam Rooney had the ball in the net. Shinnie's shot from outside the box was parried by Hamilton, who knocked it into Adam's path. Replays showed he had gone a fraction early so it was the correct call.

Some beautiful link up play at the edge of the box allowed Kenny McLean the chance to have a go. Hayes chested it down and it sat up nicely for Kenny who lashed his shot just over the bar. The form he's in, you would not have been surprised to have seen it hit the net.

McLean is currently playing with so much confidence. He stepped up to take a free kick shortly afterwards. Sadly it didn't make it over the wall and was cleared away comfortably.

As the hour mark approached, the Dons scored a second. Again it all came from pressing Hearts up the field with McLean once again involved. The Dons forced a slack back pass from Avlonitis which put Hayes through on goal. He nipped the ball past Jack Hamilton and showed great composure to roll the ball into the empty net. For a split second it looked as if the goalkeeper was favourite to collect the ball but Jonny’s burst of pace got him there well ahead of the stranded keeper.

The Dons were now playing with a smile on their face and despite the difficult underfoot conditions, were playing some lovely one touch football.

McLean nearly made it three shortly afterwards with a blistering shot from outside the box. Hamilton got his gloves on to it. Hayes tried something similar moments later and was also denied.

Niall McGinn was also unlucky not to score when Hayes delivered a nice ball into the box. Niall's header was just over the bar. He should have hit the target. Adam Rooney came off for Jayden Stockley with 15 minutes to go. Adam had worked extremely hard and with Jayden's height now there was to be no respite for the Hearts defence.

The chances kept coming for Aberdeen with Ash Taylor rising well from a corner to head just over the bar. Again it probably should have been a goal. Aberdeen were in complete control though.

After 83 minutes, Ryan Christie replaced Jonny Hayes who received a standing ovation for his performance. Moments later youngster Frank Ross came on for Niall McGinn who was also given a great reception from the Red Army.

As the Dons went looking for more goals the game ended on a sour note when Jayden Stockley was sent off just ahead of stoppage for what was ruled to be violent conduct. Steven McLean produced a red card after the referee had waved play on when Nowak pulled Jayden’s shirt before the incident. It was a disappointing finish for what had otherwise been a perfect performance from Aberdeen.

The final chance of the match fell to Sam Nicholson who rounded off a disappointing day for the Jambos by mishitting a shot from close range.

That was the last action of the game, as the reds won their ninth home game in a row. This was also one of their best performances during that run.