To preview the game against Hearts on Thursday night, Tony Docherty spoke to the media during the pre-match media conference. 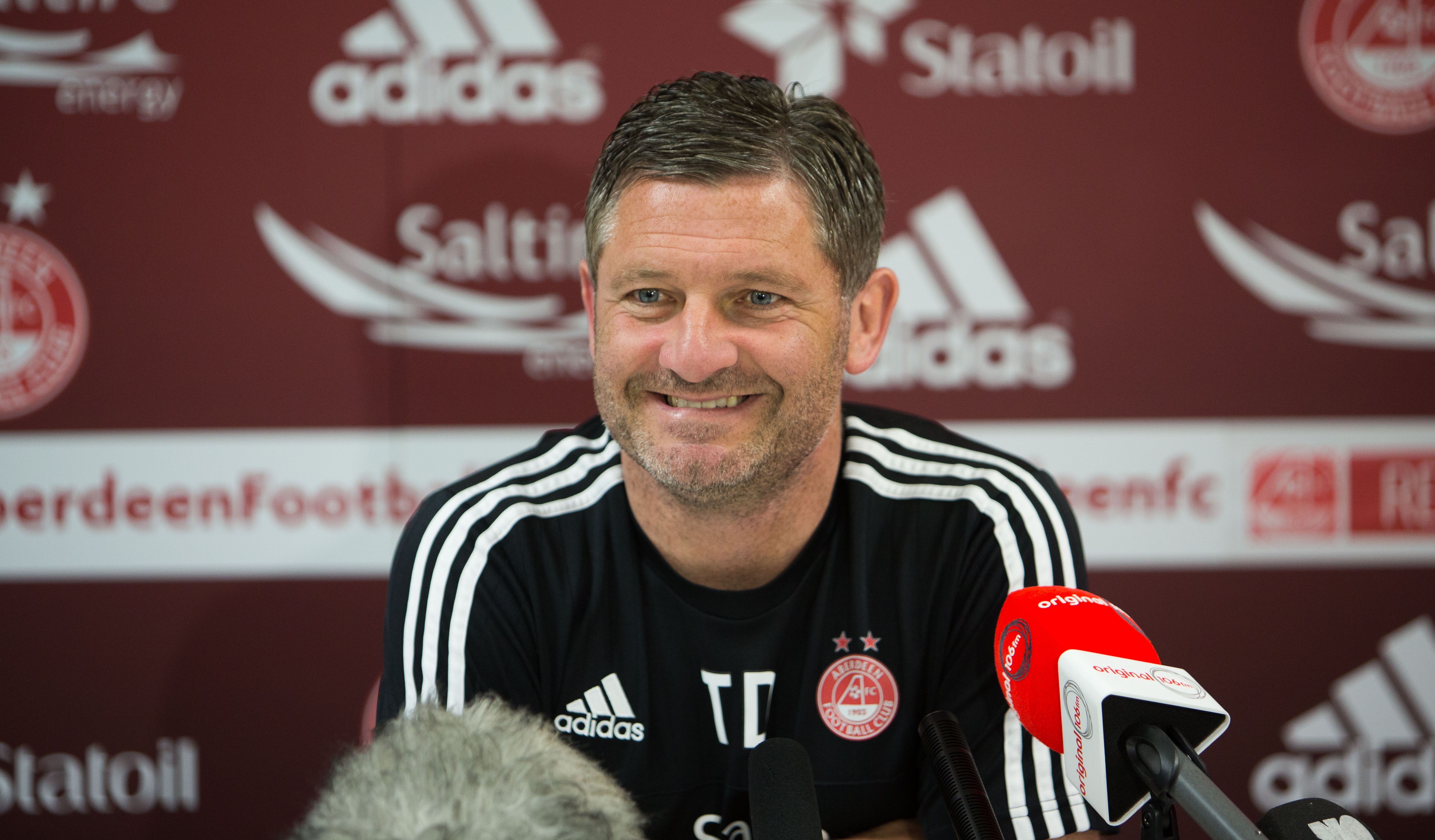 To preview the game against Hearts on Thursday night, Tony Docherty spoke to the media during the pre-match media conference.


“It’s a game against one of our rivals as they are sitting in third place and it is a televised game, where we are going to have a big crowd at home so of course we want to do well.

“We are going to try and beat the points record that we set last year outwith the Old Firm accruing 75 points over a season. We are now sitting on 71 points with two games to go so we are keen to better that. We have got six points to try and do that so the game means an awful lot to us. “We have just trained with the players there and there is a competitive edge so they are looking forward to the match. We are not downing tools at the moment, we have still got work to do and six points to play for.

“Over the next two games there is an opportunity for some of the young ones to come in and I’ve got to say that they would be coming in on merit.

“The young players have done great again this year as they have finished third in their league and there has been some real progress in some of the young players this year in addition to the ones that we have sent out on loan. They will get their opportunity but I will have to emphasise that it will be on merit.

“The manager is very busy at the moment, he is very good at getting his work done early in terms of recruitment and there will be announcements made over the next couple of days. In terms of the players who are out of contract we will be making announcements on that but as you know there is work going on to bring in players here as well.

“We will bring in the right players, at the moment we have got a strong squad with four players named in the SPFA Team of the Year voted by their peers and I think Adam Rooney would also have made that had he been fit. If we can add to the squad with the right type of players and the right people we will do that.

“Hearts have had a good season and it doesn’t surprise me with the resources that they have. They have targeted second spot all season and of course they wanted to stay in the top six initially but once they achieved that they had a target of finishing second and they were very competitive with that. I think it reflects on us that we are 10 points clear of them and that we managed to see of their threat for second place with four games to go. They have done well and we expect a game tomorrow that will reflect that.

“Apart from Simon Church and Adam Rooney obviously everybody else is fine. I think it’s important to finish the season as strongly as possible not just for the players but for everyone at the club.

“Simon has done fantastically well since he came in. It was a big loss losing Adam Rooney but Simon Church has come in and done well for us. He is a good lad and has really fitted into the dressing room well, he is a fantastic trainer and a good professional.

“We have got two tough games at home but I think the players have earned the right to go and enjoy these games with the support and focus on a good campaign before coming back next year and hoping to go that little bit further.”

Dons go down to only second home defeat

The possibility of posting a new record points tally this season slipped away from the Dons as they were defeated by Hearts on a frustrating evening at Pittodrie. 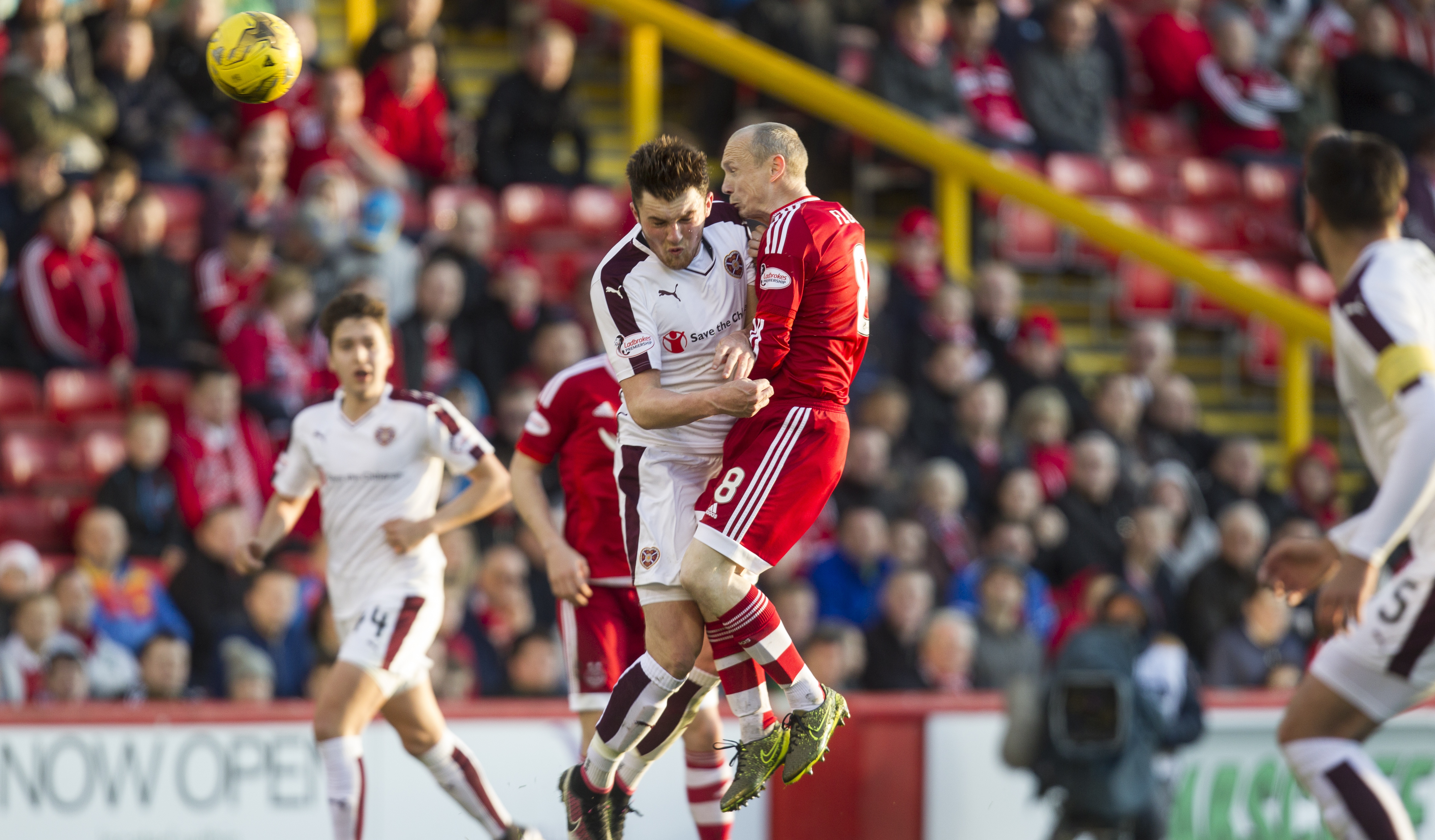 The possibility of posting a new record points tally this season slipped away from the Dons as they were defeated by Hearts on a frustrating evening at Pittodrie.

Beset by injuries, Aberdeen were unable to filed a conventional centre-forward, but at the other end of the park, 19 year old Scott McKenna made his full debut alongside Ash Taylor.

The Dons enjoyed the best of the early possession and the first real opportunity came their way after nine minutes. Kenny McLean got down the left before bending a cross through the six yard box, just in front of Graeme Shinnie who couldn’t quite get a touch. McLean caused trouble again four minutes, this time on the right, his cross drawing an unconvincing punch from Hamilton, troubled by the glare of the sun, an advantage Aberdeen didn’t use enough.

In the 14th minute, the Dons got the ball wide again, Niall McGinn skipping away from three defenders before powering to the by-line, his pull back just eluding the advancing Shinnie. Missing the physical presence of Rooney and Church through the middle, the Dons were having to be more intricate in their attempts to find a way through a massed Hearts defence.

There was plenty of width to Aberdeen’s game and in the 22nd minute, McGinn’s low cross from the right was deflected into the goalkeeper’s hands from a deflection at the near post.

A couple of minutes later, Oshaniwa collected the first yellow card of the evening after chopping down Jonny Hayes on the edge of the box. Taking the free-kick from a central position, McGinn clipped the ball over the wall but it wouldn’t come down quickly enough and flew over the bar.

Hearts finally got a sight of the Aberdeen goal after a spell of pressure in the 34th minute, Buaben hitting a bobbling shot from 20 yards, Adam Collin getting down to his right to tip the ball around the post before collecting the bal well at the back post from the corner.

Shay Logan found himself behind the Hearts defence in the 38th minute as he chased down a long clearance from Ash Taylor, cut inside before hitting a skimming left foot shot from nearly 30 yards, Hamilton saving comfortably.

Hearts made a more aggressive start to the second half, Dauda and Taylor battling for the ball over 15 yards, Taylor just doing enough to force Dauda to shoot wide from a tight angle in the 51st minute.

The Dons responded three minutes later, Hayes darting past two challenges to put a cross into the six yard box, Hamilton punching clear under pressure. The Irishman tried his luck again in the 58th minute, smashing a shot towards the far corner from 30 yards, Kitchen getting in the way to divert the ball wide. A good spell for the home side culminated in a great effort from McGinn in the 59th minute, Hayes and Jack working the ball from right to left, McGinn stepping inside and curling a right foot shot inches wide of goal.

Against the run of play, Hearts grabbed the lead in the 64th minute after winning a free-kick in a central position 20 yards out. Ozturk struck the ball well, over a ducking Hearts striker who created a hole in the wall. Collin could only parry the shot and Dauda was the quickest to react inside the box, stabbing the ball in from inside the six yard box.

It could have been worse a couple of minutes later when Juanma got free to collect a long ball down the left but he over-hit his cross, Dauda unable to get on the end of it.

From there, Hearts were happy to sit in and though Aberdeen continued to dominate possession, they struggled to find a clear cut opening. Joe Nuttall came on for his debut with nine minutes to go, but for all that the Dons huffed and puffed, Hearts saw the game out to post the clean sheet that won the game.