Dons get reward from corner count 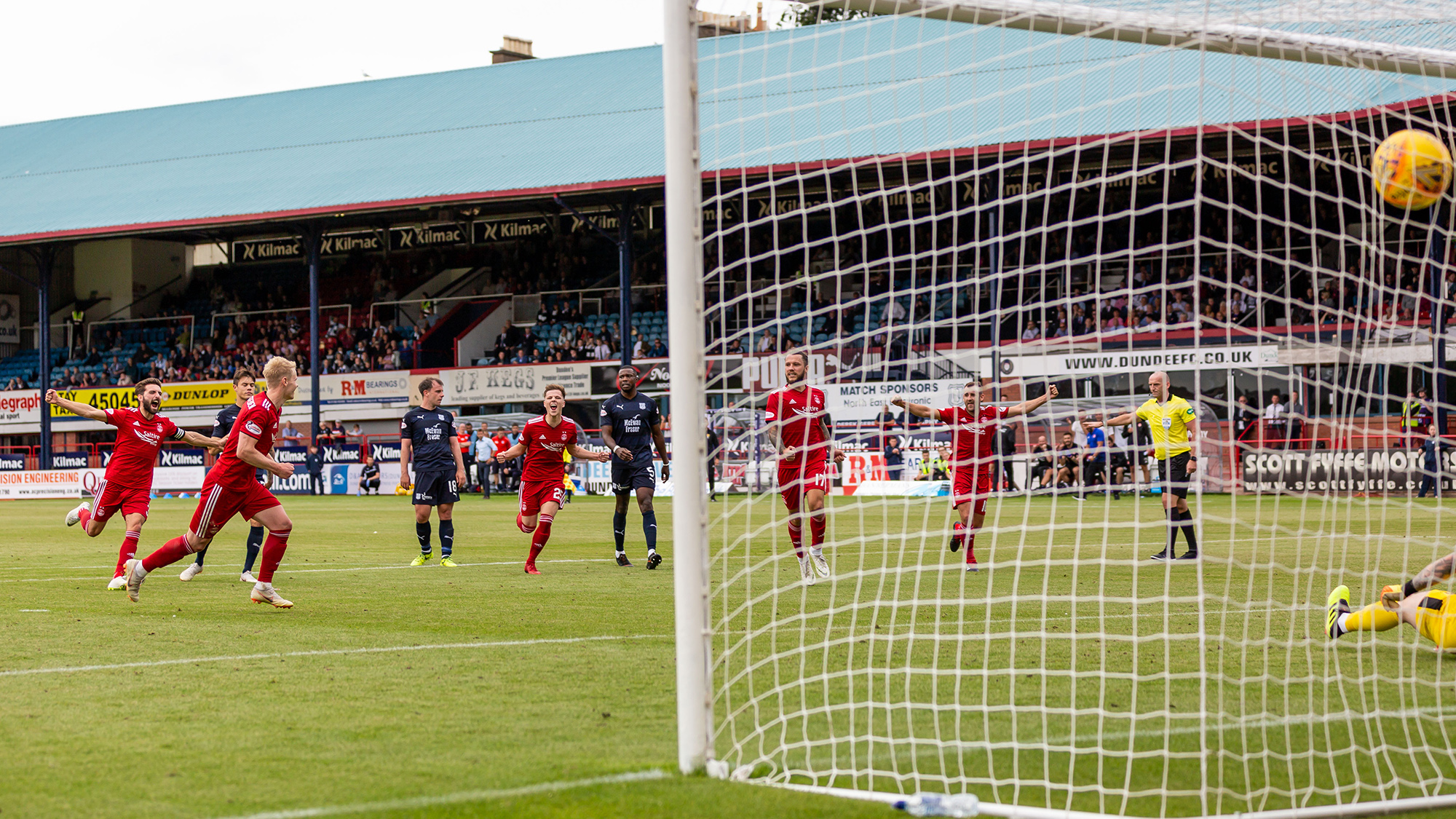 Derek McInnes made one change with Stevie May replacing the injured Scott McKenna in what looked a very positive line up. 3,500 members of the Red Army were in attendance at Dens on perfect day for football.

The Dons forced a corner in the second minute which May took but it was too long for the red shirts. Immediately at the other end Paul McGowan made a good little burst into the area but Michael Devlin did very well to make a block. Michael was outstanding all afternoon. Then May almost released Niall McGinn on the left but the winger just ran the ball of play. But second later McGinn was fed the ball again and got a good deep cross in for Ferguson to attack at the back post but Dundee eventually got out of danger when Mackay-Steven’s through pass went out of play. McGinn was seeing plenty of the ball in the early stages out on the left which was encouraging.
In the 10th minute Madiamga got himself away from Shinnie on the half way line and then in a central position somehow managed to work an opening and his shot did not got far over Lewis’ bar.

A Mackay-Steven corner was flicked on by Stevie May and Lewis Ferguson looked as if he would get on the end of it in the six yard box but a Dundee defender did very well to make a blocking tackle. Then GMS crossed for May, but his shot was also well blocked at the near post. The Dons kept the pressure on with another couple of corners which were whipped in by McGinn this time, but Cosgrove headed the ball over.

With 15 minutes gone May did well to win possession and played it wide to Cosgrove but instead of driving in towards goal he held the ball up and the chance was gone. In the 18th minute Aberdeen won corner number five, some indication of the Dons early dominance. The chance was wasted though when McGinn played it short to GMS but McGowan had read the move and was able to get over and snuff out the danger.

McGinn then crossed for May and his flick won corner number six. Again it was worked short so McGinn had a better angle to cross, he found Considine who did well to direct a header towards goal but the ball just went wide of Jack Hamilton’s post.

For all their dominance it was Dundee who had the best chance of the opening period when a move involving Shinnie and McGinn broke down. The ball was cut back from the right to Sofien Moussa who blasted a glorious chance over. The home side then forced a couple of corners before Ferguson picked up the first yellow card of the game.

Aberdeen were now not getting it all their own way.

Good movement from May won another corner on 28 minutes but again the visitors could not create an opening from the set piece. On the half hour mark another corner, again worked short to improve the angle of McGinn but the Dundee defence stopped anyone getting a clean header in and they did the same again when the ball came back over. On 32 minutes Devlin was booked for a high foot on Moussa. Dundee also had a free kick in a very good position and it was Devlin who defended the situation really well, getting a blocking a header in. Another Aberdeen corner almost created a break for Dundee but Shinnie did just enough to save the day.

The Dons were showing plenty of invention from the corners but could not get the break of the ball.

GMS was now over on the left and his cross caused panic in the Dundee defence and Hamilton and Meekings collided. As the ball came back in May squared it for Cosgrove and Hamilton did well to get back into position to make the save. Probably the first clear opening for the Dons.

Corner number 10 came and went and then the Dons created a couple more decent chances just before the break.

GMS produced some lovely trickery over on the left and cut it back to Shinnie who had a shot blocked. It fell to May who had his back to goal, he tried to wriggle free and managed to get a shot away but it was saved solidly by Hamilton at his near post. Then on the stroke of the half time interval McGinn beat his man on the right and his frustratingly just evaded everyone.

It was Dundee who had a golden chance at the start of the second half when Moussa flashed a header from a corner just wide. The striker had a free header and should have done better. Then May drove over a low cross which was met by Cosgrove but he could not quite get enough on his header and it also flashed wide.

On 50 minutes Gleeson was booked.

A scruffy start to the second period with neither team taking control.

On 52 minutes Elton Ngwatala played Moussa in on the left hand side of the box, it was another decent shooting chance but again he lacked composure and blasted over. The home side were starting to cause a few problems and half time substitute Adil Nabi was looking lively.

A great long field pass from May found GMS and he cut inside but his shot was well off target. A disappointing end to a promising move. On 58 minutes another decent opening for Dundee but this time it was Mendy who failed to hit the target when he pulled his shot wide.

Back came the Dons – McGinn had a couple of runs but his final ball could not create anything. Aberdeen then enjoyed some possession but still not openings.
It was needing a bit of quality from someone.

In the 65th minute it almost came from Bruce Anderson. A Shinnie shot spiralled up into the air and the Dundee defence, who had looked solid, showed some hesitation for the first time. Bruce Anderson pounced on the mistake and cracked a thunderous shot off the bar. He was so unlucky no to be the hero for the second week in a row. He impetus though help turn the game in Aberdeen’s favour.

Shinnie, always keen to have a shot to try and get something happening inside the area, had another low shot very well blocked by Genseric Kusunga. Then a free header from a corner for Ferguson but failed to knock the ball back into the danger zone.

In the 73rd minute Gleeson was replaced by Forrester. Within seconds of the change Aberdeen had a penalty after a corner finally proved Dundee’s downfall. A deep ball was met by Dominic Ball at the back of the six yard box. Dom, who had a fine game at right back, had got up well and in their attempt to recover the situation Kusunga was adjudged to have handled the ball when his arm was in the air. When ref Bobby Madden pointed to the spot the appeals from the Dundee players were half hearted – they knew it was a penalty. Gary Mackay-Steven kept his cool, sent Hamilton the wrong way and the rolled the ball into the net. Relief of the Red Army.

Scott Wright then replaced Stevie May and the energy of Wright and Anderson helped get Aberdeen up the park in the closing stages.

There were a couple of nervous moments. Josh Meekings failed to connect with a cross when he had the goal gaping and also Lewis was forced to make a very good save to keep Nabi out at his near post. It was an instinctive save from Joe who had nothing else to do the whole game. Top goalkeeping.

On 86 minutes McGinn curled a free kick just over. Then, despite a few deep crosses into the box, Aberdeen managed the game well in the three minutes of injury time with Devlin outstanding. His positional play was excellent.

Not pretty but a good win on the road for Aberdeen.