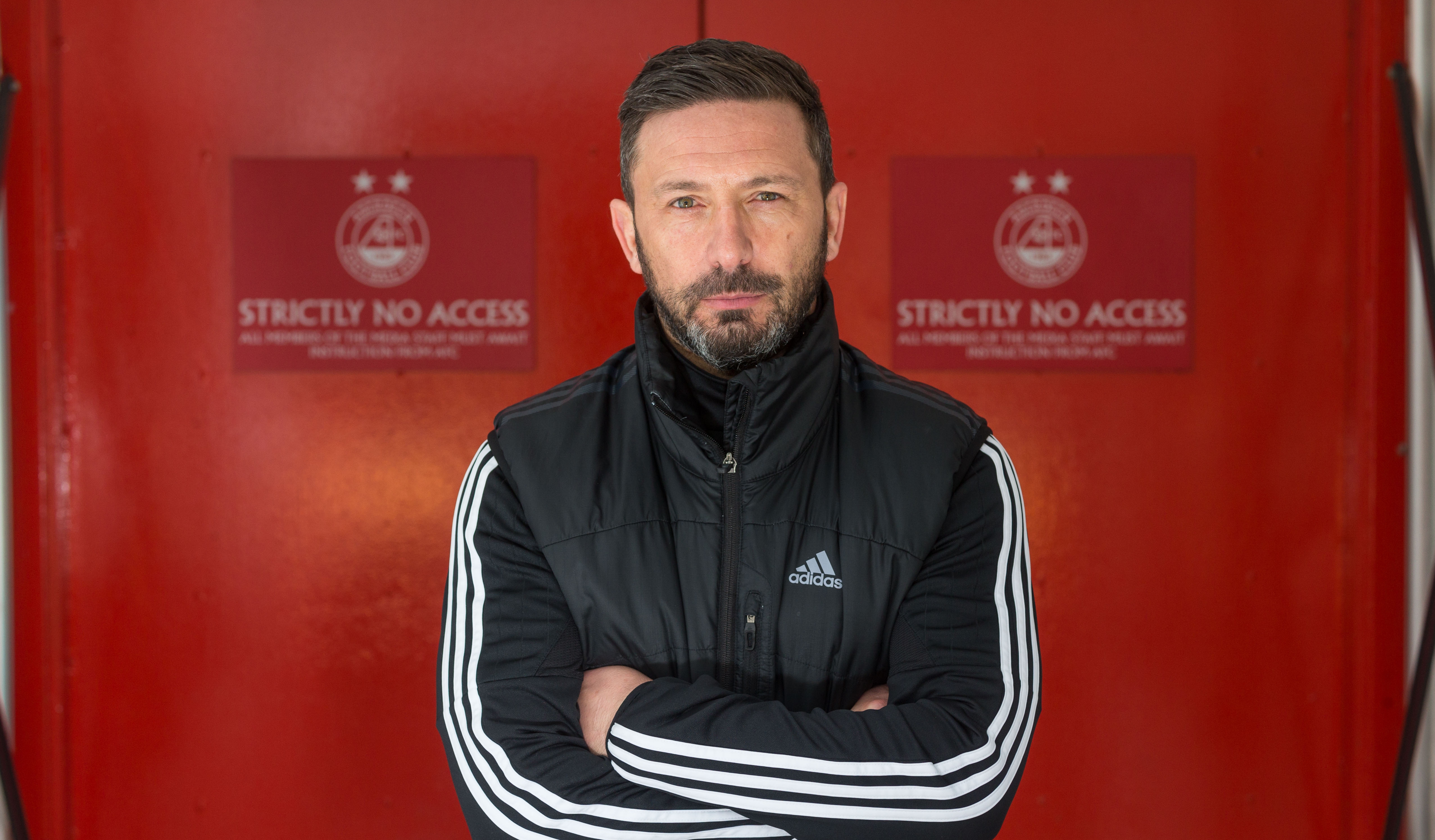 “The Hearts game being off tonight does not affect us.

“I am confident the game will go ahead on Friday. Our preparations are the same so we are looking forward to the game. It is a very important game as every game is at the moment. We want to build on the confidence from Sunday’s result. It was a top class performance, great for the players to be showing that level of performance. They demonstrated real energy and pace at this stage of the season which is really pleasing for me. Hopefully we can continue that for the remaining six games.

“We know there is no real room for error at this stage of the season if we want to keep close to Celtic.

“It is results over performance at this stage but it was pleasing to have both on Sunday. “Hearts have grown through the season. They are a very confident side and have good experience in the right areas and we know it will be a very a tough job.

“When we won down there in the league earlier in the season we were very strong that day. We got ourselves in front early on and played very well in that first half period. To win on Friday we will have to put in another very strong performance.

“It is an equally important game for both teams.

“We want to keep ourselves in the fight for as long as possible. Last season we were well clear of third spot but this season Hearts have pushed us. They will qualify for Europe like us. They will try and pull us back like we are trying to pull Celtic back so there is still a lot to play for.

“There are 18 points available and we will try and get as many of them as possible.

“With a number of players pushing for places at this summer’s European Championships, I think it can only help us during the run in. It was one of the reasons Simon came up here. It is important Niall finishes the season strongly to show his manager at International level that he is ready. Also Jonny and Kenny picking up their first caps was hugely significant for them and for us as a club.

“Team news is that Robson is suspended. Pawlett and Rooney are out. Everybody else is fit, no problems from Sunday.”

Dons fail to take their opportunities

Derek McInnes made one change to the side that beat Hamilton Accies on Sunday with Craig Storie replacing Willo Flood in the middle of the park. 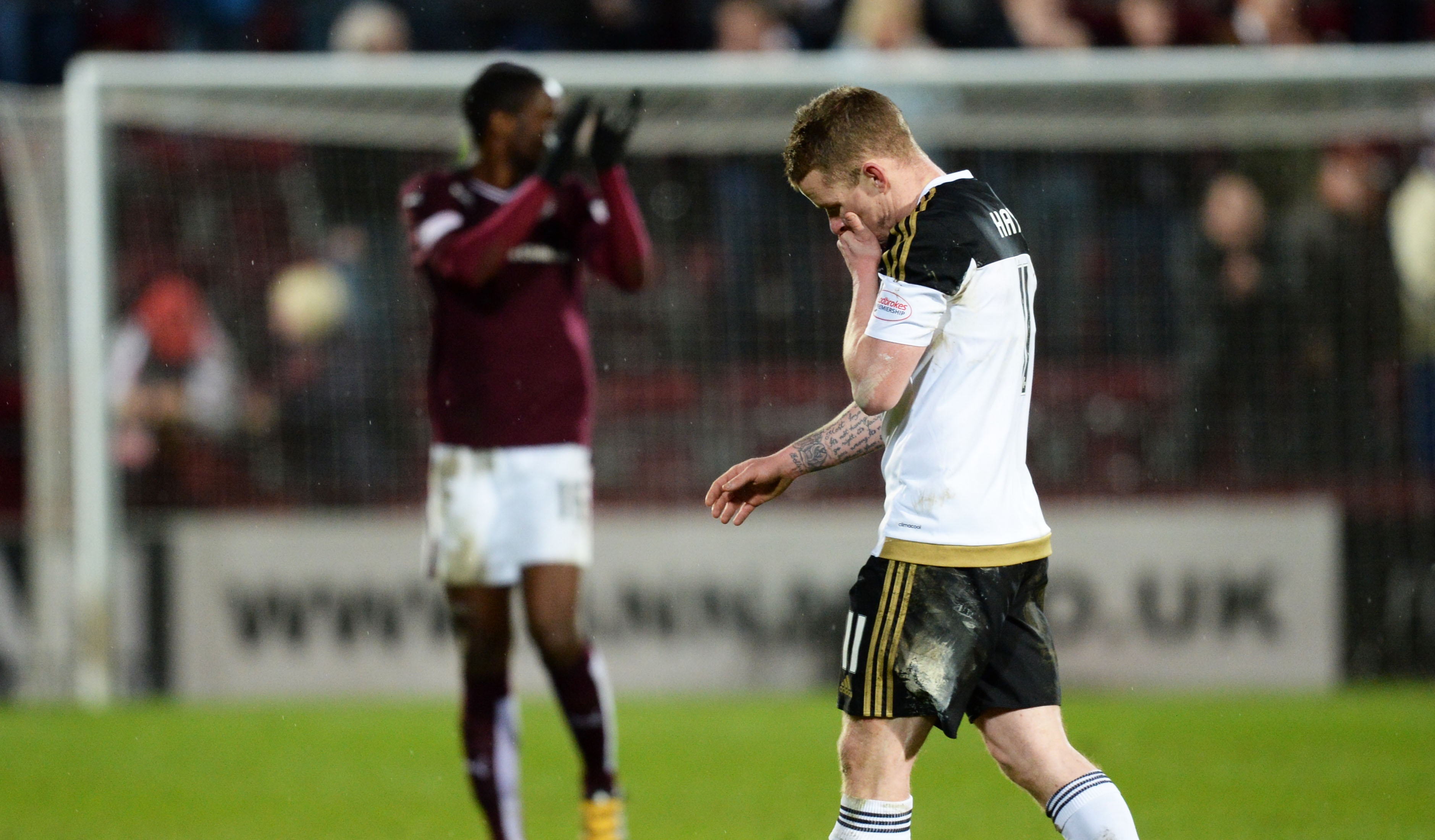 Derek McInnes made one change to the side that beat Hamilton Accies on Sunday with Craig Storie replacing Willo Flood in the middle of the park.

So for what would be a massive game in the season, the Dons lined up with Brown in goal, a back four of Logan, Taylor, Reynolds and Shinnie. Storie and Jack were in midfield with McLean ahead of them, McGinn and Hayes provided the width and Church was up top.

On the bench Connor McLennan was included in the squad for the first time. The 16 year old striker from Peterhead joined the Dons full time in December. He is another player from the youth academy that many have high hopes for.

The game kicked off with the usual atmosphere at a packed Tynecastle.

Good pressing from the Dons in the opening minute allowed Storie to win the ball in a good area. He played it to Church who feed Jack but his shot looped up into the arms of keeper Neil Alexander.  In the second minute the home went close. A Shinnie clearance landed at the feet of Sam Nicholson and his shot went across Brown and just went past the post. The Dons keeper looked to have his angles spot on.

Then in the fourth minute Aberdeen took the lead. From a throw in Shinnie and Hayes worked a clever one two. Shinnie swung a good cross to the near post and Church, who had made a great run across his marker, stabbed the ball home.

On seven minutes the Hearts defence looked suspect when they failed to deal with a number of dangerous crosses. When McLean played the ball back to Logan on the right his cross picked out McGinn who was completely unmarked but Niall could only steer the ball post the post. The Northern Irishman had so much space he might have even have been able to take a touch.

And a few minutes later more hesitation at the back allowed in Niall again but his shot was block by Alexander with his feet. He might have been better squaring the ball to Church. The resulting corner was very nearly turned into his own net by Rossi. Alexander in the end actually made a very smart stop, reacting quickly to dive low and make a stop on the line. Then another corner was played back into towards Logan and he had a free header which the Hearts keeper was well positioned to stop.

On 12 minutes Steven McLean booked Shinnie for a foul right on the edge of the area. Nicholson’s ball in was headed goalwards by Blazej Augustyn but Scott Brown produced a brilliant save even although the ball appeared to past him. He then did well to tip the resulting cross behind.

Back came the Dons.

Hayes won a free kick out on the left. The ball in was half cleared to Storie on the edge of the area and his shot only went inches past. All though a goal kick was awarded the shot may well have taken a deflected which helped it past the post.

It had been an incredible start to the game but the Dons should have been more than one ahead.

On 25 minutes Hearts hung a good cross up to the back post and Taylor was forced to a vital headed clearance. Ryan Jack was well positioned to help clear the danger. On 29 minutes Rossi’s free kick was tipped over by Brown. Another decent save.

After a superb start from the Dons, they had allowed the home side back into the game and on 33 minutes Hearts were level. Ozturk was given way too much space for a shot. His dipping effort from long distance was saved by Brown but the keeper failed to push the ball to safety and Juanma pounced quickest to score.

A few minutes later Nicholson’s cross from the right found Janma but his shot on the turn just went over. On 36 minutes McGinn and Hayes swapped wings as McInnes tried to get the Dons back into the game.

With about five minutes of the half to go Ryan Jack went down after a challenge midway inside his own half. Immediatley the skipped looked in trouble and after some length treatment had to be carried off. His absence was a major blow as he had looked the most composed player on the park.

In added on time at the end of the first half a cross from McLean just went over the head of Logan. 1-1 at half time was probably a fair reflection on a pulsating 45 minutes of football.

Seconds into the start of the second half McLean picked up a yellow card. Although Aberdeen tried to pick up the tempo of the game, they were not able to dominate like they had done at the start of the first half.
McGinn won Aberdeen a corner on 48 minutes. Aberdeen then enjoyed a good spell of pressure as Souttar received treatment. When Hearts were back to eleven men a cross from the right was met by McGinn but under pressure he could not direct his shot on target. It was a half chance.

Logan and Brown combined to stop Buaben netting from close range following good work from Juanma, although the hosts claimed the right-back had used a hand. Rossi smashed a 20-yard strike off the outside of the post.

On 57 minutes Logan put over a couple of good crosses from the right, the second of which was headed just wide from McGinn. On reflection it was a good chance and he should have hit the target. On 59 minutes Rossi was booked for a foul on Hayes as he ran in on goal. Hearts had done a good job of keeping Jonny quiet and continued to look more dangerous side.

On the hour mark Aberdeen took a quick free kick despite having a number of players out of position. They lost possession and a ball over the top saw Jamie Walker get there before Mark Reynolds on the left wing and he whipped in a cross which the unmarked Juanma nodded home from inside the six-yard box.
Another very poor goal to lose.

A few minutes later Hearts had a great chance to win the game but Walker pushed a shot wide. The Dons were struggling as Hearts had a couple of long range shot on target but Brown held them well.

On 70 minutes McGinn on a rare occasion got in behind the Hearts defence but his cross was knocked behind for a corner. In the opening stages McGinn and Hayes had been getting in behind the full backs at will. The Dons kept the pressure on and Flood burst into the box which led to another chance for McGinn but he pushed the shot past the near post.

Which five minutes to go, as the game became stretched, Hayes finally found some space and picked out Church but he could not control the ball properly. The striker had the Dons last real chance but pushed a shot wide. Before that on 88 minutes Aberdeen had a chance to put over a free kick but Smith was unable to get the out from underneath his feet.