We preview the final match of the year. 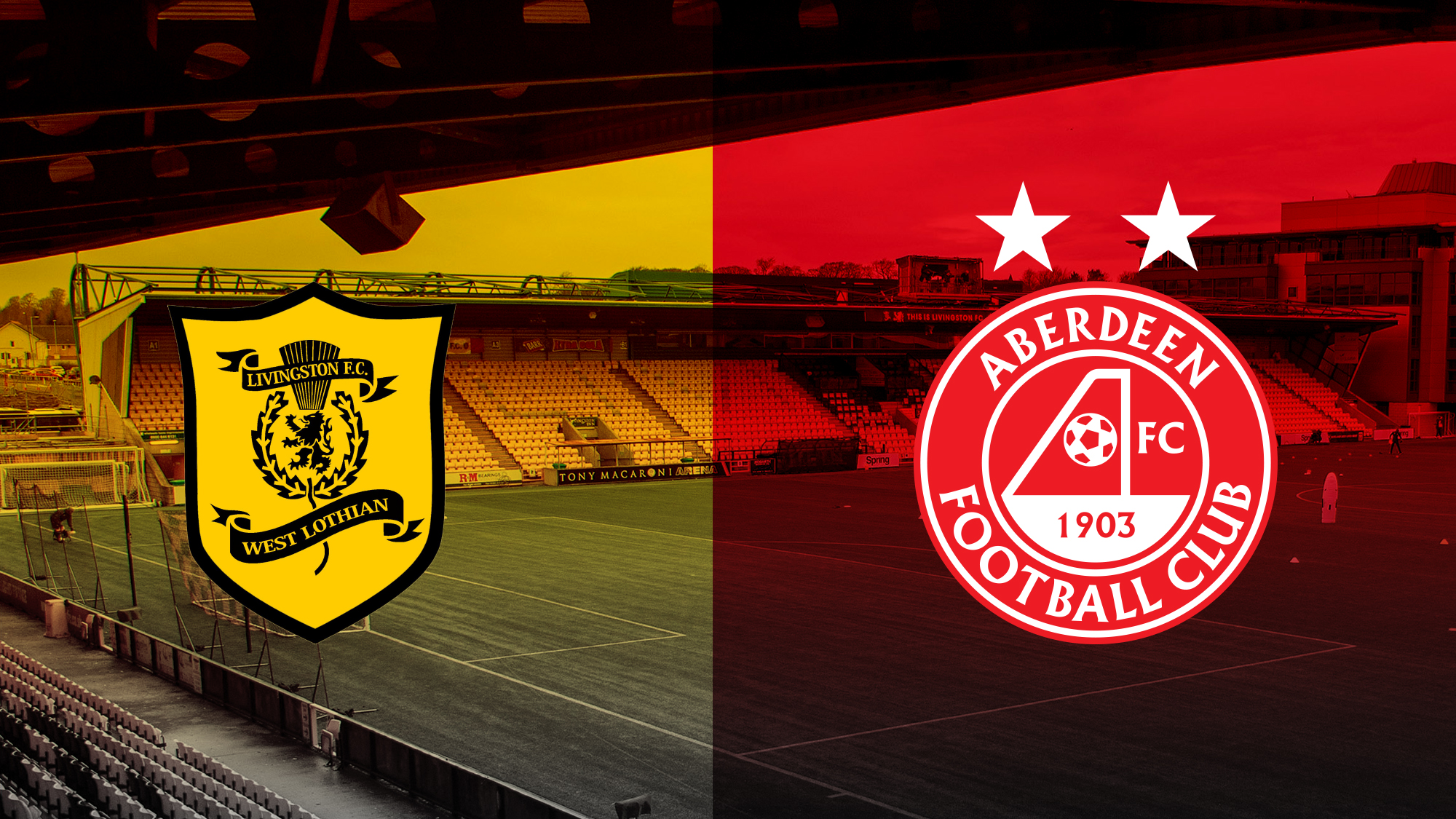 We preview the final match of the year.

The Dons round off 2018 with an away trip to West Lothian as they face Livingston at the Tony Macaroni Arena. Despite the 4-3 defeat against Celtic on Boxing Day it’s been a largely positive month for The Dons and they face Livingston for the second time in December after the dramatic victory at Pittodrie two weeks ago.

Livingston have had an excellent return to top flight football and sit in 7th place, six points behind Aberdeen and hold a very impressive home record with seven wins, two draws and only one defeat. 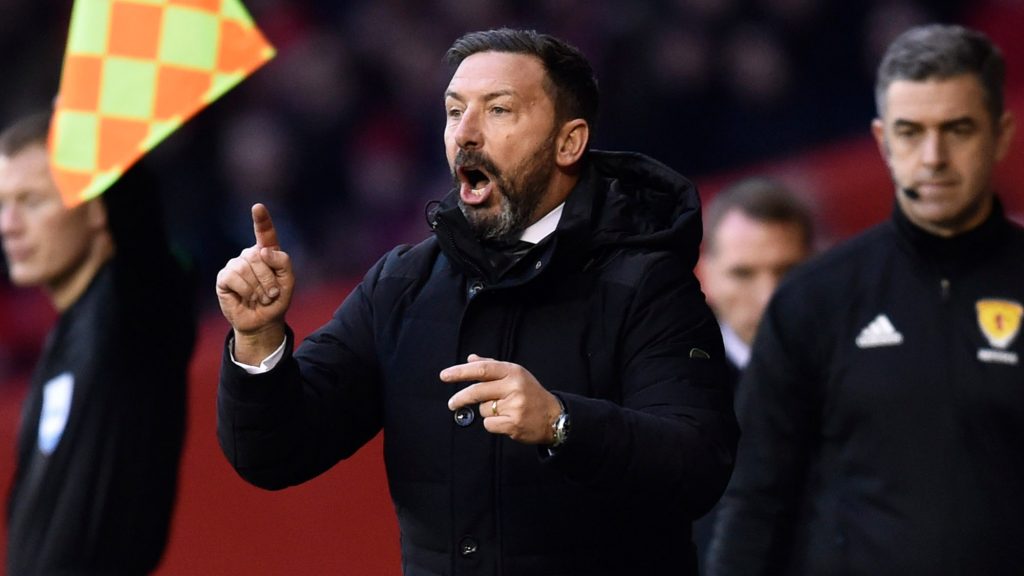 “It’s important we try and finish the month off in winning ways, December has been really demanding on everyone, staff, supporters and especially the players with the physical output they have to give.

“They have surprised a lot of people, having sustained their form so far into the campaign and they deserve a lot of credit, they’ve only lost once at home and some good teams have gone there and come away with nothing or just a point so to win there will be a big ask for us but that is the intention.”

Read what the manager had to say in full here 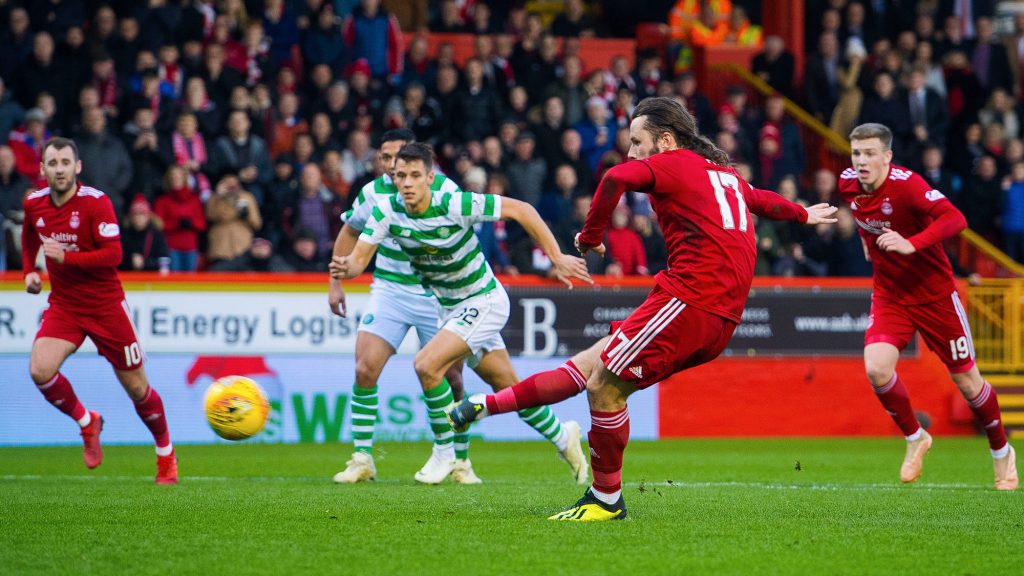 “The Livingston match is going to be tough. It’s a hard place to go, especially with the AstroTurf pitch, but we’ve got to put full focus on that for the rest of the week and get ready. We’ve had a successful December so picking up some points would have been better, but it wasn’t to be so we’ve got to focus on the Livingston game now.

“It’s a little bit of a break after the match so we’ll have time to get the legs back and it would be nice to finish off the run we’ve had with three points.

“The mental side of it is good and I think all the boys will agree it’s good to have the games, but sometimes the fatigue can kick in a bit sooner different than if it went week to week. It’s more punishing on the legs, but I think we’ve dealt with it really well and if anything, we’ve been looking stronger at the end of the games. It’s a real credit to the fitness.”

Last Five Away To Livingston

It’s been thirteen years since The Dons travelled to Livingston and previous sides have often found it a difficult place to go. The club’s overall record at Almondvale reads: Played 10, won 3, drawn 5 and lost 2. 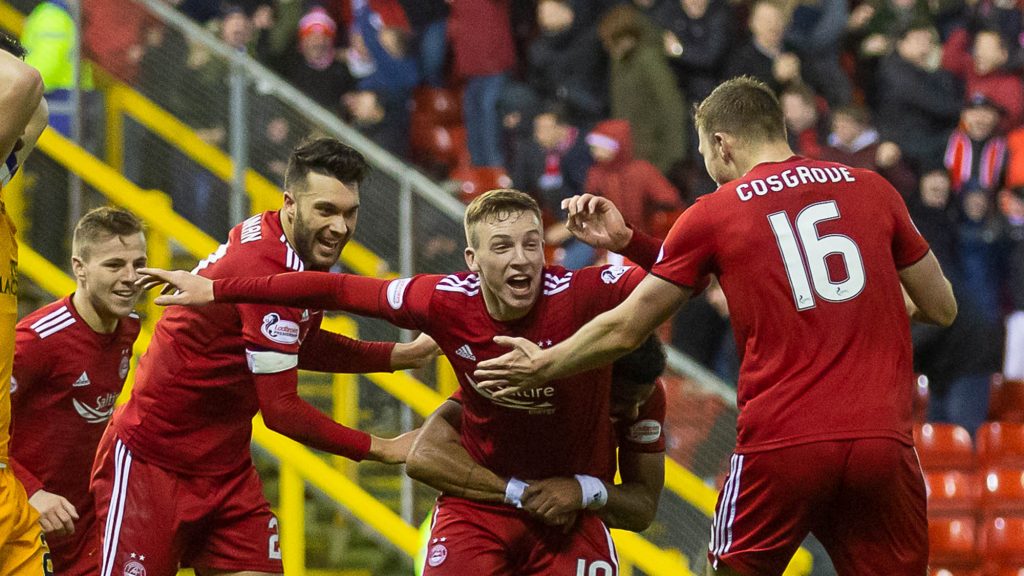 The teams faced each other earlier this month at Pittodrie, their first league meeting in twelve years and it produced an epic contest. The Dons took the lead inside ten minutes thanks to Niall McGinn’s excellent volley, but were immediately pegged back through Pittman. Then on the half hour mark the game was turned on it’s head when McMillan gave Livingston the lead.

The introduction of Connor McLennan changed the game for the hosts and the youngster turned provider for Sam Cosgrove to draw The Dons level. With the game heading for a draw, The Dons forced a corner in the 92nd minute and up stepped Lewis Ferguson to flick an overhead kick into the net from close range to give Aberdeen a massive three points.

Read the important information before travelling to Livingston here

If you can’t make the match make sure to tune into RedTV from 2.45pm. There will be live video for international subscribers and post match we will have goal action, reaction, highlights and a full match replay. For more details on the RedTV coverage please click here.

Thank you for your amazing support during 2018 and we look forward to seeing you all back after the winter break in 2019.

Come on you reds!

Dons end year on high with victory over Livingston 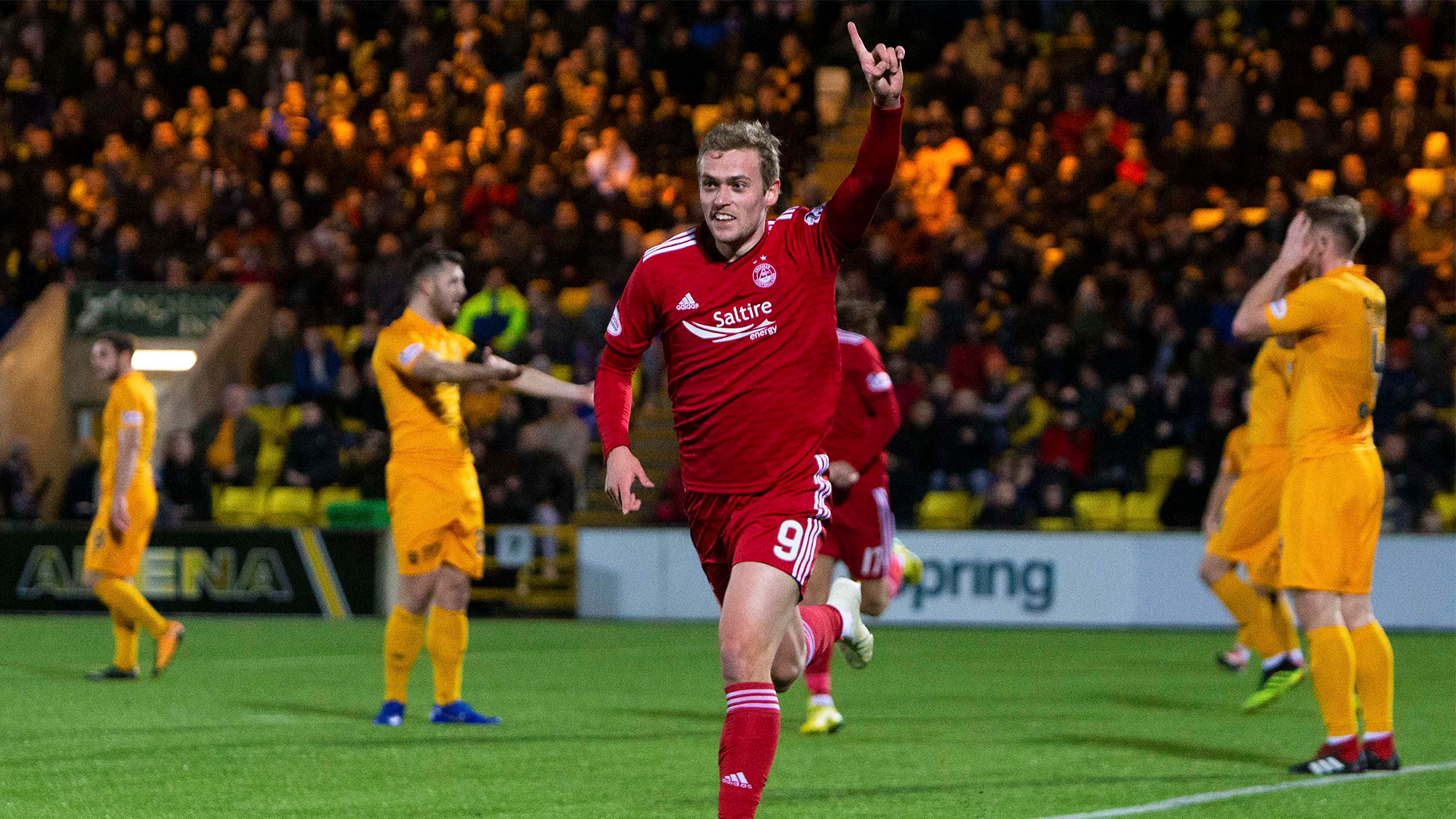 For the first trip to Livingston in 13 years the Dons were without the injured Niall McGinn and Max Lowe plus the suspended Lewis Ferguson. With Michael Devlin and Gary Mackay-Steven out plus long term casualties Mark Reynolds, Tommie Hoban and Frank Ross still missing, it was a makeshift line up.

Scott Wright and Bruce Anderson came into the starting XI with Miko Virtanen and Ethan Ross being promoted to the bench.

In the first minute Wright beat his marker but was unable to deliver a cross. Former Don Lee Miller was in the opposition line-up and he was heavily involved in a move in the fourth minute. Miller flicked it on for Ryan Hardie who found space inside the area until McKenna came over to cover. Hardie then dinked in a cross for Miller but his header went harmlessly wide. A couple of minutes later Wright threaded a perfect through ball for Stevie May to pick up. The striker tried to curl an effort into the far top hand corner and he was not far away. Menga then put over a dangerous cross which Lewis did well to intercept.

It had been a fairly even start.

In the 13th minute Aberdeen put a neat passing move together but the chance was wasted when Dom Ball’s cross was far too strong. On 16 minutes Anderson did really well to create an opening for Stevie May, his shot was well blocked by Halkett, who deflected the ball behind for a corner. Livi comfortably dealt with the set piece. Aberdeen then enjoyed a good spell up to the 20th minute when Dom Ball fired in a shot which deflected nicely for keeper Liam Kelly. Two minutes later a McKenna cross field pass appeared to be drifting out of play but McLennan did really well to keep the ball in play and then find Cosgrove in space inside the area. Sam had a good shooting chance but he failed to make a decent connection.

Then Livingston had two great opportunities to take the lead.

In the 27th minute Joe Lewis produced an outstanding stop to keep out a Halkett glancing header. A minute later the home side had a numerical advantage as they broke into the box but McKenna did just enough to recover what looked a desperate situation at one stage.

On the half hour mark Shay Logan pulled up with an injury and was replaced by Stephen Gleeson.

Back came the Dons as they forced a couple of corners. The first one saw a push on Bruce Anderson but to his credit he failed to go to ground. The second corner, Anderson appeared to be dragged down by Menga but nothing was given. It looked a very strong penalty shout. A few minutes later Anderson then had two further penalty appeals when first he was taken down by Liam Kelly and then he was caught by Lithgow. Referee Steven McLean remained unimpressed.

Lee Miller, returning from a long term injury, was replaced in the 32nd minute by Nicky Cadden.

Set pieces then at both ends as Aberdeen forced two corners then Livingston won a free kick in a good position but both defences stood firm. The West Lothian side finished the half on top but the only real chance was when Declan Gallagher had a go from the right but his low drive rolled wide.

After a very busy December, one final push was needed with 45 minutes to go. It was going to take a big effort from everyone in a red shirt.

Scott Wright produced a lovely little run in the first minute of the second half. His sideways pass teed up May and his shot just deflected past the post. The resulting corner was cleared by Shinnie put over a decent cross from the left and Considine inside the six yard box very nearly got on the end of it.

After 51 minutes McLennan got one on one with the full back and comfortably beat him. His cross to the near post was met by Stevie May and his first time shot went inches past the post. The best chance of the game so far, certainly from an Aberdeen perspective.

Livingston then had a corner on either side but again the Dons defence looked comfortable. It was certainly still a very even game as both sides looked for that bit of quality inside the final third.

On the hour mark Bruce Anderson was added to the long injury list as he hobbled off. Young Bruce was replaced by James Wilson. Within his first touch he brilliantly turned his marker and sprayed it wide to May. Stevie was in a good position but rather shanked his shot as he went for power instead of accuracy. After 75 minutes, from a long throw, the ball fell to Craig Sibbald on the edge of the area but his shot never troubled Lewis. The Livi keeper looked less than comfortable when a Shinnie free kick was put on top of him but the whistle then went for an infringement.

Then on 70 minutes Aberdeen took the lead. Stephen Gleeson deserves credit for taking a quick throw. Aberdeen went from right to left as Wilson played it to McLennan who fed it to Shinnie and then he played it wide to Wright. Scotty beat his marker and then put over a low cross which found the feet of Wilson but he could not quite get a shot away. The ball was then cleared to Gleeson on the edge of the area. The Irish midfielder had time and drove the ball back in and Wilson brilliantly diverted the shot into the net.

Aberdeen then had a great chance for a second when McLennan was clear on the right and he found May but his shot was off target. It would have made the final fifteen minutes a lot less nervous had he found the net. On 78 minutes Scott Wright was replaced by Dean Campbell.

There were by now a lot of tired looking bodies on both sides, but Aberdeen had a spring in their step after the goal and looked in reasonable control.

With five minutes left Aberdeen got a second. James Wilson again was heavily involved as he sped down the right. He got to the by-line and had time to get his head up and pick out the run of Dean Campbell at the back post. Dean managed to do enough to force the ball over line although the final touch may have come from a defender, Lithgow and subsitute Lawson both made contact, but we will give the goal to Dean!

That should have been that.

But on 88 minutes though the home side got a lifeline. A loose McKenna back pass didn’t find Joe Lewis. Considine looked to have recovered the situation but with two yellow jersey’s roundabout him Ryan Hardie was able to force the ball over the line. Joe Lewis was claiming he was off side and looked to have a case.

Aberdeen had to withstand three minutes of injury time and in the final ten seconds a long throw in caused real concern but the Dons threw bodies in the way of a couple of shots and the whistle sounded.

Once again, this squad showed tremendous character to get the job done.