A first half goal from Ash Taylor and a goal from Shay Logan on his 100th appearance were enough to give The Dons all three points. The Dons were dominant throughout and were worthy winners. 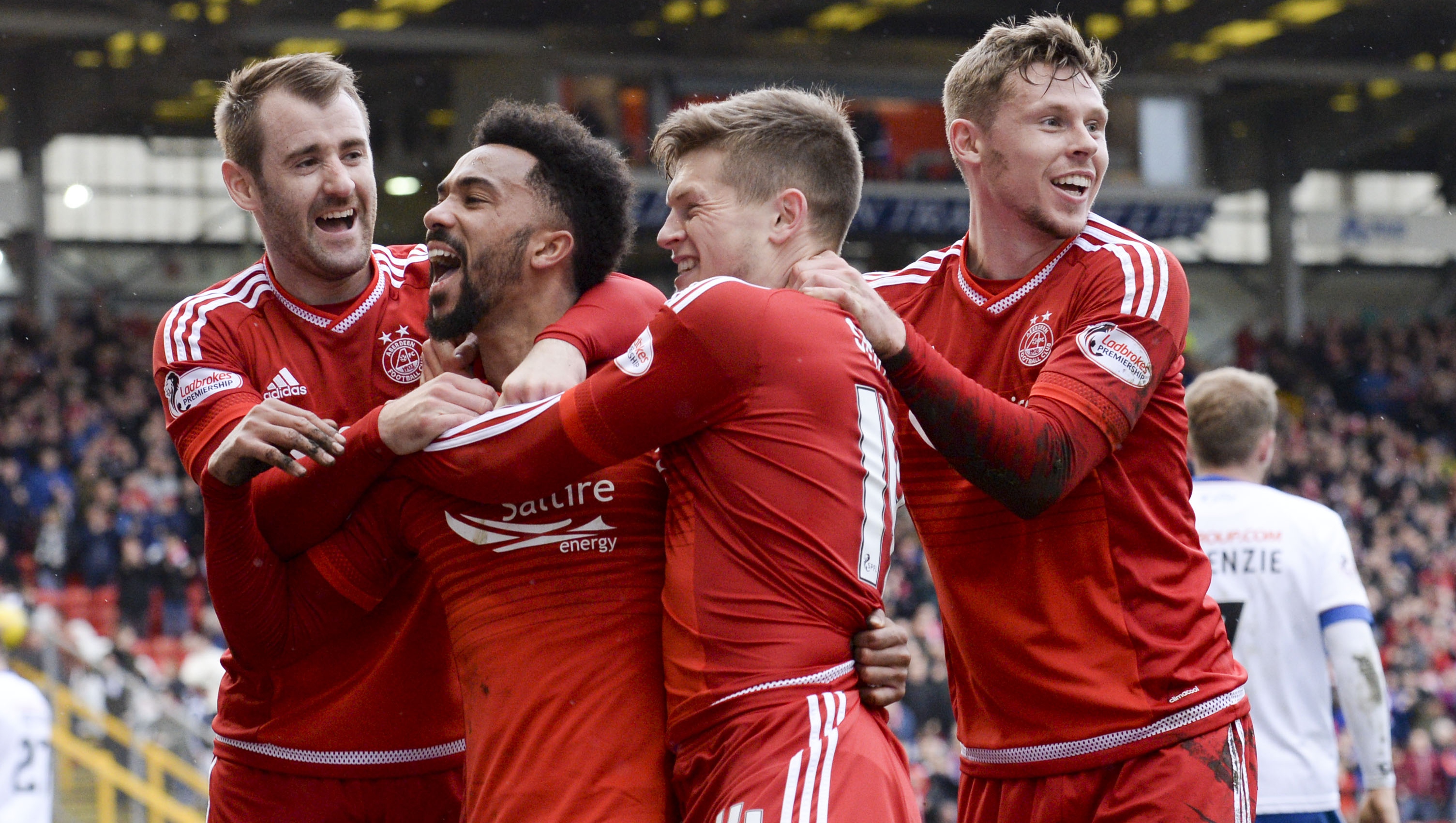 A first half goal from Ash Taylor and a goal from Shay Logan on his 100th appearance were enough to give The Dons all three points. The Dons were dominant throughout and were worthy winners.

Aberdeen got the game underway on a fairly bleak day at Pittodrie looking to make it ten wins out of ten against Kilmarnock under Derek McInnes’ management.

The Dons looked the hungrier of the two teams in the opening exchanges and showed promise when Kenny McLean’s eighth minute run from a wide area took him within 20 yards of goal. The midfielder took advantage of the space opening up in front of him and saw his effort come back off the post narrowly missing the run of the on rushing Simon Church.

A couple of minutes later Barry Robson was given the chance to trouble Jamie MacDonald when he won a free kick deep inside his own half. Robson, who had been brought back into the side after a short, yet impressive shift against Partick Thistle in midweek, floated the ball right on top of the chasing pack. His effort was comfortably held by the Killie goalkeeper.

The reds continued to drive forward despite the visitor’s efforts to get themselves into the contest, and their best chance of the half so far came 22 minutes in when Simon Church’s headed flick landed at the feet of Niall McGinn, who had beaten the offside trap. His well taken first touch left him six yards from goal, however MacDonald dived early and blocked the shot to keep the game at 0-0. The Red Army sensed their men were getting closer to that vital opening goal.

The Dons rode their luck slightly when familiar face Josh Magennis had the ball in the net as the half hour mark approached, only to be prevented by the linesman’s flag. His half volley from outside the box proved he was looking to cause an upset at his former stomping ground.

Nearly 5 minutes from half time Aberdeen won a corner, where Robson’s beautiful delivery was met by the head of Ash Taylor who rose highest to head the ball into the ground and into the net. The 6’7 centre back has made a name for himself in the Granite City for being a nuisance at corners, thankfully in the opposition’s box. Aberdeen 1-0 Kilmarnock.

The hosts had their tails up and looked to add a second before half time, and it nearly came when Ryan Jack took the initiative and kept his composure, only to see his deflected effort easily held. Shortly afterwards Church attempted an athletic header that failed to trouble MacDonald. The on-loan MK Dons striker wasn’t to be stopped by the fact the ball was nearly behind him as he looked to grab his fifth goal for the AFC Dons.

Much of the focus before the match was on Kenny McLean who would be looking to justify his recent Scotland call up. The midfielder was certainly full of confidence as he attempted a looping effort from almost 30 yards out. However the score remained 1-0 as referee Euan Anderson sounded the half time whistle. It threatened to be a nervous fifteen minute break for the home fans as they watched Jonny Hayes limp off the pitch shortly before the whistle was blown.

The Dons came out unchanged after the break, with Hayes appearing to have shaken off his late knock. The second half began on an unsavoury note 2 minutes after kick off, when a great ball into the box from the goal line made its way onto the head of McKenzie. His header went across the face of the goal, only for Josh Magennis to head the ball in to level the score. Magennis’ celebrations were muted but you could see what it meant to the visitors who were desperate to get themselves out of the dreaded play-off spot. Aberdeen 1-1 Kilmarnock.

Aberdeen looked to regroup and continue where they left off, and were nearly back in front 5 minutes later when McGinn’s fizzed shot across goal grazed the crossbar. The second time in the match they’d hit the woodwork.
Derek McInnes brought on Cammy Smith for Barry Robson 62 minutes in to freshen up the midfield. Barry walked off to a wonderful ovation from the home support. Smith looked lively from his first touch and slipped in McGinn who couldn’t quite trouble the keeper.

The Dons were in with a shout of a penalty when Jonny Hayes went down under pressure. Hayes seemed to insist he had been barged off the ball – corner given.

However all was forgotten when with 20 minutes to go Jonny Hayes drove the ball across the face of goal for Shay Logan to smash the ball past MacDonald. Shay once again proving his attacking ability with a poacher’s goal knowing where to be at the right time. A great way to celebrate his 100th appearance for the club. Aberdeen 2-1 Kilmarnock.

Logan needed to be on red alert moments later when Magennis got the better of Andrew Considine, played a low ball across Scott Brown’s goal for the Dons right back to get the slightest touch on the ball to put it out for a corner and away from the approaching Obadeyi. An essential clearance, as the Killie striker looked certain to score.

Niall McGinn made way for the defensive head of Mark Reynolds, an indication that the Dons management team felt it was time to tighten things up even more at the back. Kilmarnock came with the plan of using the height they had up front, so moving to five at the back seemed a justified move.

Aberdeen were made to suffer as Killie continued to commit men into the box and pile balls into the danger area. But the Dons showed the mental strength that has served them so well this season as they held on for another precious three points.

By no means a straightforward win for the men in red but the sort of games that they need to win if they want to continue to keep the pressure on Celtic at the top of the table.