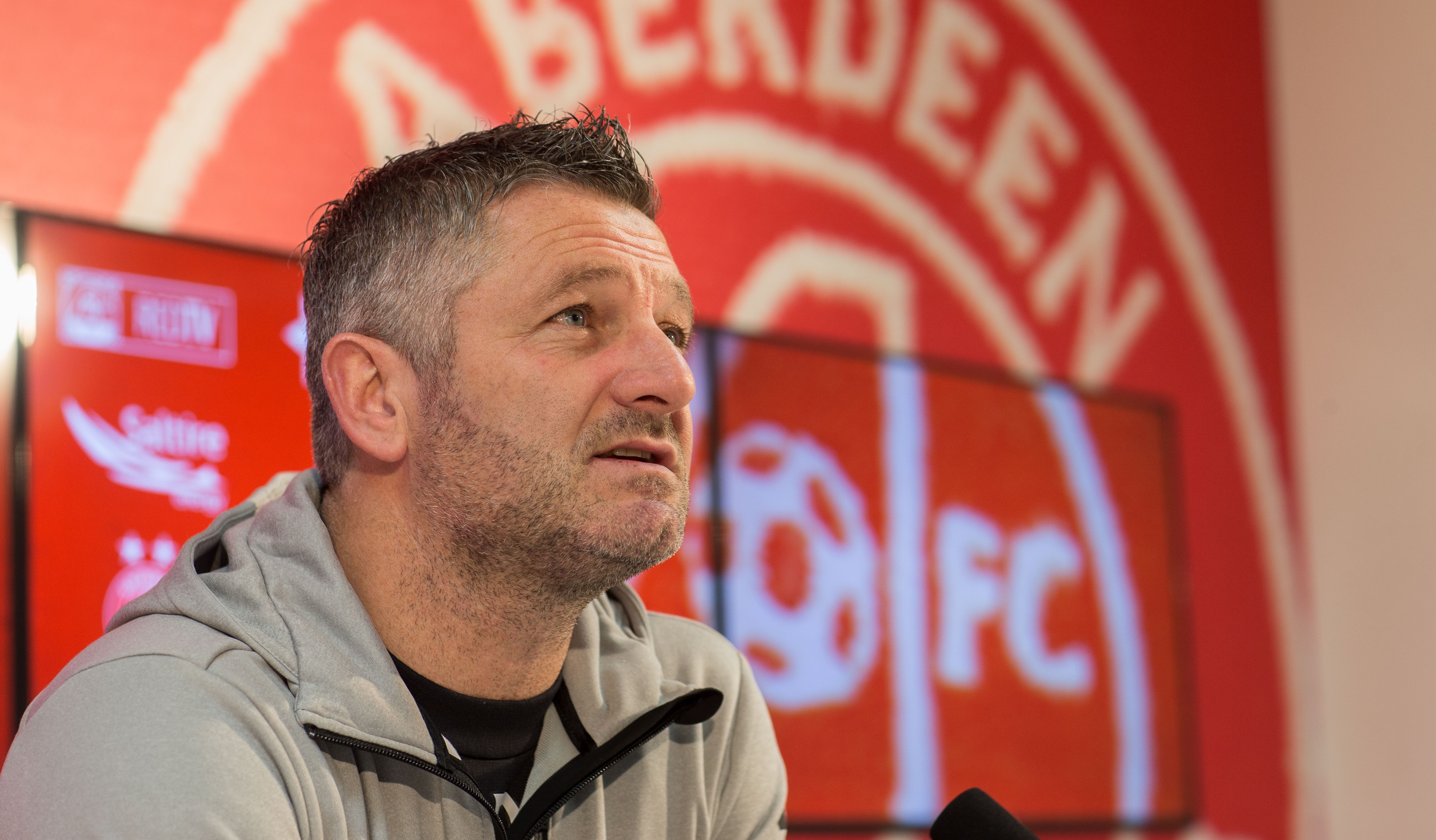 “And a difficult fixture. We are playing a Ross County team who are looking a bit more settled. They have a few injuries to contend with earlier in the season. They now look a bit more settled in terms of team selection. The last three home games they have drawn, and two of them were against Hearts and Rangers. They have Liam Boyce back who has scored something like 9 goals in 14 appearances which is a stat not to be overlooked.

“So we are facing a difficult opponent.

“We are not underestimating the task ahead of us but we are going up there hoping to get the three points.

“It was a very busy schedule this month but it is now seven games instead of eight. Of course, we prepared for the game on Tuesday but the players did not expend the amount of energy you would during a 90 minutes. So we feel as fresh as Ross County will feel going into the game.

“We have trained the last couple of days and there has been a real intensity to the training. Hopefully we can take that into the game.

“As I say Ross County looked more settled and in the games we have watched them recently at home they have been strong. Their performance levels were very good.

“We know Jim and Billy very well. They had travelled down on Tuesday so with the lights going out they could not do their homework on us! However, we know they will be ready for us.

“The game earlier in the season, the sending off had a big influence on the match. Going down to ten men opened things up a bit for us and then I thought we were very clinical with our finishing. You can never predict what type of game it will be, you can never predict sending off’s etc, but we are preparing for a much tighter game than last time.

“We are not too concerned about other results at this stage. We still have twelve points to play for before the 30th of December. We will try and get as many as we can and then we will look at the league table when we go into the break. Hopefully we will be in a strong position.

“There will be a real push to get as much momentum as we can.

“Team news, everyone is fit, we have a full bill of health.”

Derek McInnes made three changes to the side that drew with St Johnstone in the last official game, one change though to the side that started the abandoned match on Tuesday night against Motherwell, Pawlett coming in for Burns. 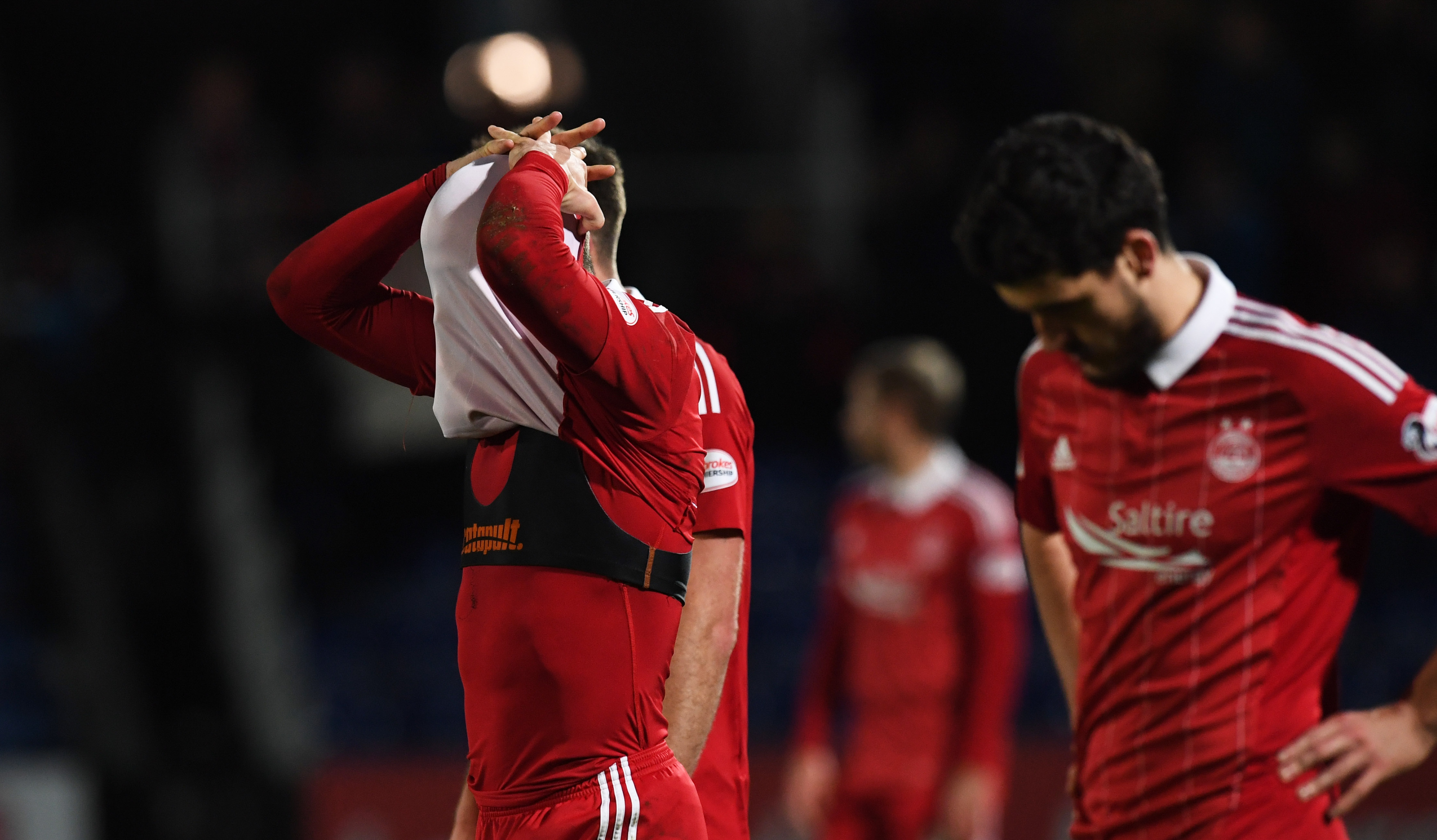 Derek McInnes made three changes to the side that drew with St Johnstone in the last official game, one change though to the side that started the abandoned match on Tuesday night against Motherwell, Pawlett coming in for Burns.

Considering the time of year, the game kicked off in relatively mild conditions and on a decent surface. Although there was enough of a breeze for Ryan Jack to switch the direction the Dons were shooting in the first half when he won the toss.

In the first minute Aberdeen won a free kick but a training ground routine did not go to plan. In the third minute a Jack ball allowed Burns to use his pace. Wes’ ball back eventually fell to McLean and although his shot was blocked by an Aberdeen player the Dons did eventually win the first corner of the afternoon. Maddison’s ball in though evaded everyone. On five minutes County had their first real attack. The ball fell to Chris Routis about 25 yards out and his shot was not far wide of the post although Lewis did not look too concerned.

On 7 minutes Tony Dingwall really should have scored. From an Aberdeen thrown in, County dispossessed McLean in the middle of the park and clever movement left Dingwall one on one with Lewis inside the area. Lewis made a decent stop initially, the ball came back to Dingwall who looked odds on to score but Shinnie made a brilliant block that prevented an almost certain goal.

From the resulting corner Hayes broke at pace which led to a little spell of pressure and another corner but Stockley headed wide. McLean and Maddison then had shots from the edge of the area but it was encouraging to see the Aberdeen players willing to have a go.

On 12 minutes a lovely ball by Boyce set Dingwall free down the right and Shinnie could not catch him. He put over a really dangerous ball across the six yard box but Logan read the situation really well and was able to clear.

Just after 15 minutes Burns and Maddison linked down the left to set Shinnie clear. His cross was cleared before ref Craig Thomson got in the way to prevent the attack going any further. A few minutes later Thomson again got in the way but this time deflected the ball into the path of a red shirt. McLean took advantage of the situation and his shot from distance bounced up in front of Scott Fox and the keeper was relived to palm the ball behind for a corner. Aberdeen then won a free kick when Maddison was fouled by Boyce.

Hayes whipped the ball in at pace, a good free kick and Fox just managed to punch it behind. Corner number four found the head of Stockley but in the end it was an easy catch for Fox. On 24 minutes McLean again tried his luck from distance, he struck the ball perfectly and the shot only went inches over.

However, a minute later County took the lead. Fraser and Dingwall combined down the Dons right. Boyce produced a clever dummy, this allowed room for Dingwall and his ball across the face of goal was knocked in by Boyce who had continued his run. Although the goal was against the run of play, County had looked dangerous anytime they went forward. The movement of Boyce had led to the goal, his 10th of the campaign.

A few minutes later it was very nearly two. A long ball was flicked on and Michael Gardyne managed to get to the ball ahead of Lewis on the edge of the area. The keeper though did just enough to put him off and O’Connor was able to clear. Then a great chance for the Dons. McLean produced a wonderful pass for Shinnie. He got to the by-line before crossing. Stockley could not get there and either could Maddison coming in at the back post. James was agonisingly close to getting a touch.

On 34 minutes Considine was booked for a foul on Curran. From the free kick Lewis made a great save from a Curran shot after the Dons had failed to clear their lines.

Back came the visitors and they won corner number six. The ball to the far post was headed back into the six-yard box by Considine but referee Thomson frustratingly blew for an infringement. On 38 minutes Chow was finally booked for a foul on Maddison. It was not the first time he had kicked him. Worryingly Maddison stayed down and required lengthy treatment. The free kick was finally taken by McLean and his effort produced a brilliant diving save from Fox.

County then defended another corner before breaking. They had a lot of space and Logan did well to block Gardyne. A throw in then allowed Dingwall to almost squeeze the ball in at the near post but Lewis made another good save.

The Dons would have been happy to hear the half time whistle so they could regroup. It was a strange half as both teams looked dangerous going forward and there were a lot of half chances at both ends and some very good goalkeeping.

Aberdeen started the second half strongly with Maddison heavily involved. It was good to see James had recovered from his knock. The game continued to be end to end and was very stretched considering there was still so long to go.

On 51 minutes Niall McGinn replaced Wes Burns. Straight away he got involved and set up Hayes down the left. His ball in was just too high for Stockley. On 55 minutes the first corner of the second half, the Dons ninth of the game, but Maddison’s delivery was frustratingly over hit. A minute later a Jack cross picked out Hayes but his first-time effort went well over. A half chance.

Just before the hour mark Ryan Dow replaced Tony Dingwall. On the hour Maddison laid the ball off for O’Connor and his shot from distance just went inches past. Fox was scrambling and might not have got there. Rooney then replaced Stockley.

After 65 minutes a brilliant ball forward by McLean looked for the run of Rooney but Adam was inches away from getting a touch. A really clever ball in; Kenny had a fine game this afternoon. Aberdeen then enjoyed a good spell and had County pinned back.

Finally, on 67 minutes they got their rewards. A really good passage of play resulted in Logan putting over a dangerous ball which Rooney dummied. The ball went right across to the back post and McGinn calmly slotted home. Two minutes later Hayes broke at pace before setting up Maddison. James beat three players before his curling effort went just past the far post. Fox was rooted to the spot and would have got nowhere near it.

Aberdeen had been lifted by the goal and the Red Army were roaring the team forward. Routis was booked before a Jack shot from the edge of the area was blocked.

The Dons had stepped it up a couple of gears and County were really struggling to cope. With fifteen minutes to go Maddison drew a foul from Quinn on the edge of the area. Maddison’s ball came off the wall, Jack’s shot bounced up and Rooney’s header looped up for Fox.

Two minutes later Alex Schalk came on for Craig Curran. The Dons then had to defend a County corner as the home side came back into the game.

On 80 minutes the game burst back into life. A poor Fox kick out gave Aberdeen a chance but Maddison wasted it by not letting the ball run to Hayes. County then broke and Schalk got one on one with Considine. He beat the Dons last man but his shot was superbly saved by Lewis. Aberdeen through Hayes then broke towards the other end but his run was stopped by a lunge from Van Der Weg.

Hayes deep cross fell for Shinnie, broke off the Dons vice-captain and Fox in the end made a good stop. In a similar area Maddison had a better chance but his effort was pulled wide. Just before then Miles Storey had replaced Ryan Jack. Jonny Hayes was then booked.

As Aberdeen pushed for a winner the ten men of County somehow took the lead with three minutes to go. Aberdeen failed to clear a couple of crosses before Ryan Dow headed home as Lewis and Considine appeared to get in each others way. A soft goal to concede.

Aberdeen pushed for an equaliser during the four minutes of added time, Rooney and then Considine had good chances as did Maddison who won a corner in the dying seconds. Lewis came up for a final push but when Quinn headed clear, as he had done most of the afternoon, the final whistle went.

Aberdeen will wonder how they did not take something from this game.