We preview this Saturday’s trip to Tynecastle 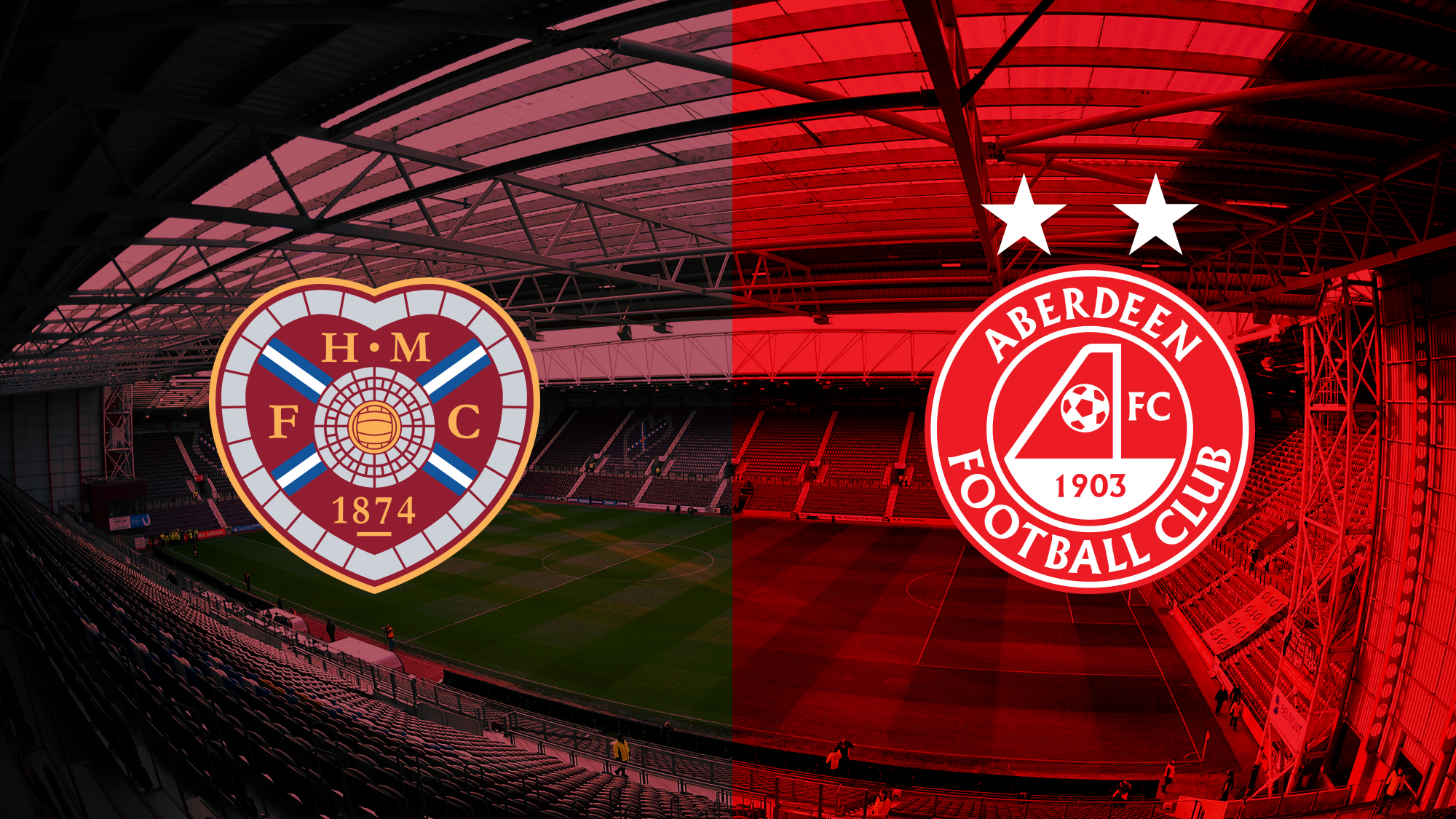 We preview this Saturday’s trip to Tynecastle

This Saturday sees The Dons travel to The Capital to take on Hearts at Tynecastle. After Tuesday night’s excellent win away to Motherwell, Derek McInnes’s side are in great form heading into the match with the team now back into second spot in the table. They are looking for their 4th league win in a row after leapfrogging Rangers on in midweek as the battle for European football hots up.

Hearts go into the game with very little to play for. With their top-six status secured Craig Levein’s men are looking to close the gap on Kilmarnock in 5th place and have made Tynecastle a difficult place to go for their opponents remaining unbeaten since moving back into their home in November.

WHAT THE MANAGER SAID

“We’ve been very competitive of late, but it was great last Saturday against St Johnstone to show that attacking threat as we know we’re capable of scoring more goals. Even the other night, I know the goals came a bit later in the second half, I though the intention and build up play was very good. I think from that side of it, while you can still carry that threat like we did the other night, keep the clean sheet at the same time, it gives you the chance to win any game. There’s a lot of players hitting good form just at the right time.

“It’s a game we can win, but we’re going to have to play well because I think Hearts are certainly far more competitive and robust under Craig and he’ll have plans for them going forward no doubt. They’re more than a capable team on their day.

“I think Hearts’ strengths are they’re robustness and they’ve clearly improved defensively. When they’ve got a front two of Lafferty and Naismith they’re always going to keep you on your toes. “There’s a platform there for Craig and Hearts to go and get good results. They’ve introduced a few youngsters this season as well, but they’ve got a very experienced team.”

“Coming off the back of two good results, confidence will naturally be high. You have always got to be on the top of your game going into a fixture like Hearts at Tynecastle. As I said we know what to expect down there.

“It will probably be a similar game to the one we had against Motherwell. They will have similar systems and will play a similar type of football. We know what to expect but we also know that we will have to be right at the top of our game if we are going to get a result.

“We have had two good results leading up to this game which is good for momentum. At this stage of the season you want momentum and you want the squad feeling good about ourselves and we have been. It is important to carry that on (ahead of the semi-final).”

The Dons visit Tynecastle for the first time since the club redeveloped their main stand. The first fixture between the teams this season was at Murrayfield where a 7,000-strong Red Army witnessed a 0-0 draw. Both matches this season have finished goalless and Hearts have managed to keep thirteen clean sheets in the process, so it’s set up to be a tight affair.

The Dons were actually the last team to win at Tynecastle before the main stand was demolished in May of last year. Goals from Adam Rooney and Anthony O’Connor made sure The Dons all-but secured second place in the league with a 2-1 win. Aberdeen are unbeaten in their last three away trips to Hearts and won both fixtures between the sides in Gorgie last season. Over the years it has been a place where The Dons have struggled, but under the current regime the team have won three, drawn three and lost two in seven games.

The hosts have the far more superior record against Aberdeen at home with 62 wins over The Dons’ 31. There have been 39 draws with the last stalemate at Tynecastle coming in a 1-1 draw in April 2014.

Gentleman George Hamilton and Duncan Shearer share the honour of being top scorers against Hearts with 11 goals apiece. Joe Harper, Graham Leggat and Harry Yorston are all two behind with nine goals each while Davie Robb amassed an impressive eight goals in his time. Of the current squad, Niall McGinn is top scorer with five goals against the Edinburgh side. With both games finishing 0-0 this season, the last scorer for The Dons in this fixture was Anthony O’Connor’s back in May of last year.

If you can’t make the game we will be on the air from Tynecastle from 2.45pm. Thanks to our colleagues at HeartsTV we will be bringing live video for RedTV International subscribers and live audio commentary for RedTV subscribers in the UK.

Aberdeen made their first ever trip to the new look Tynecastle. One change for the Dons this afternoon with Niall McGinn coming in for Kari Arnason. The game kicked off in perfect conditions and on a good looking surface. 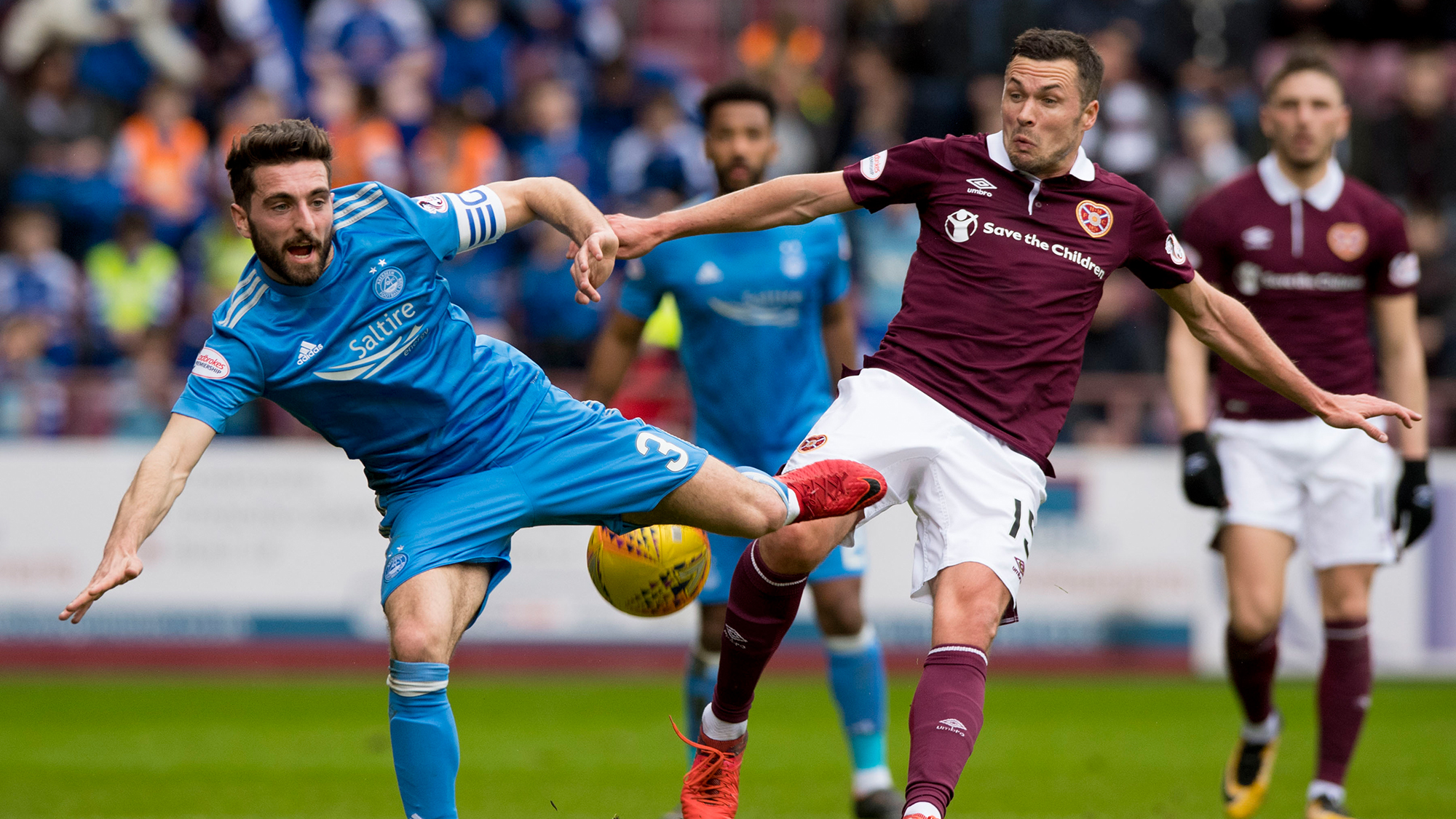 Aberdeen made their first ever trip to the new look Tynecastle. One change for the Dons this afternoon with Niall McGinn coming in for Kari Arnason. The game kicked off in perfect conditions and on a good looking surface.

After a slow start from both teams, Aberdeen very nearly gifted the home side the lead. Andrew Considine had failed to see Milinkovic drift in behind him. Lewis came out of his area to recover the situation but kicked the ball straight to Cowie. Hearts then worked the ball to Lafferty on the left of the area but thankfully for the Dons his shot drifted over the bar. With the keeper out of position he really should have scored.

A minute later May picked the ball up inside the area and he had plenty of space to look for a team mate, but he completely miskicked and it went out for a goal kick.

On eight minutes a McGinn free kick from the left was brilliantly curled into the area and met by the head of Considine. His glancing header beat McLaughlin who did not move but the ball agonisingly rebounded off the far post. Andy was really unlucky.

After 13 minutes McGinn sprayed the ball wide to Logan. His marker slipped which invited Shay to shoot, his effort was on target but comfortable for McLaughlin.

A fairly even first 15 minutes and Aberdeen had settled well.

But then on 18 minutes Hearts took the lead. From a free kick the ball was well worked down the left. The ball fell slightly fortuitously into the path of Steven Naismith who had got the wrong side of Stewart. The Scotland international had space inside the area and the striker calmly stepped inside a defender before beating Lewis.

Things were about to get a whole lot worse.

A couple of minutes later a misplaced pass by O’Connor allowed Hearts to gain possession in a dangerous area. Lafferty tried an effort from distance and the block from McKenna fell kindly for Milinkovic who put the ball under Lewis and O’Connor trying to get back could not stop the ball going over the line.

Both goals were very avoidable from an Aberdeen point of view. From looking comfortable they suddenly found themselves 2-0 down and with a mountain to climb.

On 25 minutes Naismith was booked for a late tackle on McKenna. Aberdeen were trying to get a foothold in the game but with the Edinburgh side happy to sit in, they were looking very solid at the back. McLean was seeing plenty of the ball but he was forced very deep and his long balls were being easily dealt with by Souttar, Berra and Hughes.

After half an hour a long free kick was headed on by Berra but Lewis at full strength was able to grab the ball from under his cross bar.

On 32 minutes Naismith was spoken to for dissent and then referee Beaton booked Considine for a late tackle.

In the 40th minute Christie gave away a free kick about 25 yards out. A training ground routine saw the ball played low to Berra and his cross produced a good block from McKenna, resulting in the first corner of the afternoon which Lewis grabbed.

Somehow Cowie was not booked for taking out McGinn. Niall then put over another good free kick which fell to Shinnie on the edge of the area. The shot from the captain deflected back to McGinn who drifted in off the touchline but his ambitious first time effort was well off target.

On the stroke of half time good skill from Christie who beat a couple of players as he made his way along the by-line. He tried to beat one player too many and was eventually crowded out and the chance was lost. Christie then had a shooting chance but the referee blew for half time.

A very sloppy first 45 minutes with a lot of misplaced passes.

Half time: Heart of Midlothian 2 Aberdeen 0

During the interval Kari Arnason replaced Greg Stewart with Anthony O’Connor moving into the middle of the park. The Icelandic defender made a good block at the near post as Milinkovic tried to get on the end of a low cross from the right.  By now the rain had started falling which left a slick surface but it was the home side who were benefitting as they were passing the ball about with confidence.

On 57 minutes Lafferty from a tight angle flashed in a shot which was tipped over by Lewis.  On the hour mark Niall McGinn was replaced by Gary Mackay-Steven. Then a couple of minutes after that Christie was yellow carded for a foul on Cowie.

Aberdeen were needing a spark from somewhere, but you could not see where it was coming from. Hearts continued to press the Dons midfield extremely well and they could not get anything going in the final third.

On 65 minutes GMS got the better of Naismith and was able to run into the area but his low shot from an angle was straight at McLaughlin.  At least it gave the 1,768 Aberdeen fans some encouragement.

On 70 minutes Milinkovic was replaced by Amankwaa. Also Ryan Christie came off for Adam Rooney. A minute later a fine McLean pass found Shinnie down the line. The skipper played an early ball over to GMS who had another opening, but he dragged his low shot across the goal and past the post. Both May and Rooney were well positioned inside the area, so a good chance was wasted.

With just over 10 minutes to go Lewis got down well to block a Lafferty effort with his left leg.

Then Aberdeen missed a golden chance to get to life-line. A patient build-up eventually resulted in a Logan cross to the back post picking out Considine. His knock down found Rooney but the striker saw his effort at the near post rebound off the bar.

With four minutes to go Cowie was replaced by Cochrane.

Aberdeen huffed and puffed a bit in the closing stages but never looked like getting a consolation.