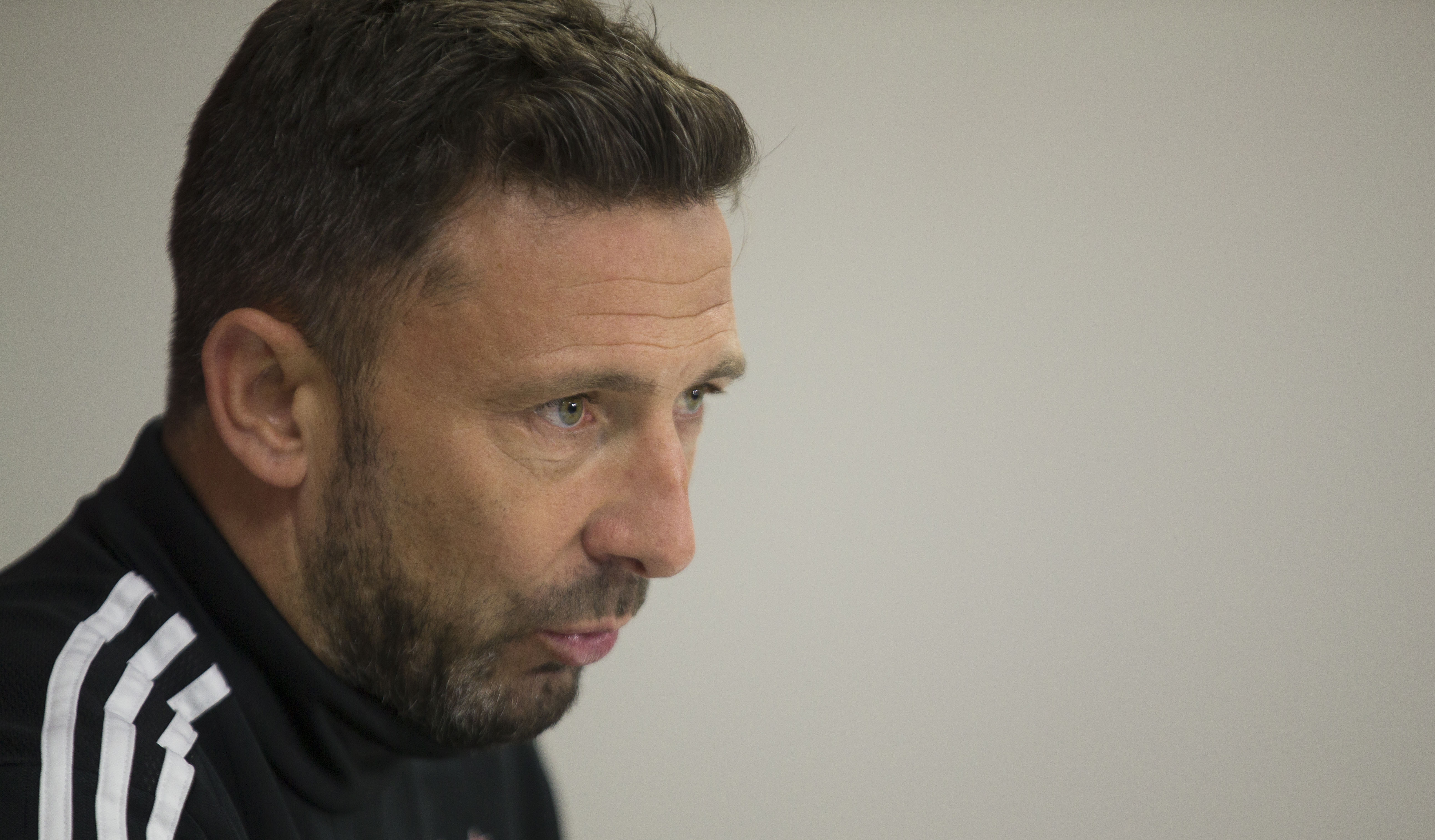 “The away goal has given everyone a bit more encouragement. Getting through this tie seems more achievable with it. Whilst the tie is still a tough one to overcome the away goal certainly makes it more doable.

“We firmly believe we can achieve the result we want to get through. We know we have to overcome a good side. You saw their quality in the first leg. We had seen first-hand prior to the first leg. They still possess that quality and we need to try and make sure we limit their opportunities.

“The goal itself was encouraging. A lot of our second half play was encouraging. Even the tail end of the first half was ok. That gives us encouragement that we can go and score again. We have got it all to do but it is something we are looking forward to.

“An early goal would be good, ideally we will score then but the goal does not need to come early on. One goal gets us through. If we can keep a clean sheet then we don’t need to go and get that goal in the early period. There has to be the balance of play between the passion and the energy, playing with the hearts and also having a measured approach at the same time. There cannot be an all-out attack approach but being the home side we do see the need to impose ourselves and start the game well.

“We have to try and apply pressure all over the pitch. They have clever players who are good at finding space. When I watched the first leg back we actually did a lot of good things. The two goals we lost are actually top quality. The general momentum of the game changed after about 25 minutes when we came more into it. We need to do that from the first whistle tonight.

“We did the journey our way and they will do it their way. The nature of the game will take care of itself. Players are that competitive when kick off comes so in context of the game I don’t think the travel has much of an affect. The problem is more afterwards. We had to do it a certain way (keep the players on British time) because we had to be ready for the Dundee United game on Sunday. We are certainly ready for it.

“We are not prioritising one competition over another. We are aware of the financial rewards if we get through this tie and beyond but we want to do well in all competitions. It is all very well freshening up the team (as we did on Sunday) but you still have to go and win the game. We do not want people thinking we are picking one competition over another. We had a team in mind for Tannadice and we have a team in mind for tomorrow and hopefully we get a similar outcome.

“Team news is that we have a concern about one player. I would rather not name him at the minute but everyone else is fit.

“We have to utilise the crowd and get them into it as well. Everyone appreciates that we are playing against a good team and we are not going to get it all our own way. There has to be a measured approach so there has to be a lot of intelligence as well as passion.”

Dons bow out of Europe despite late surge 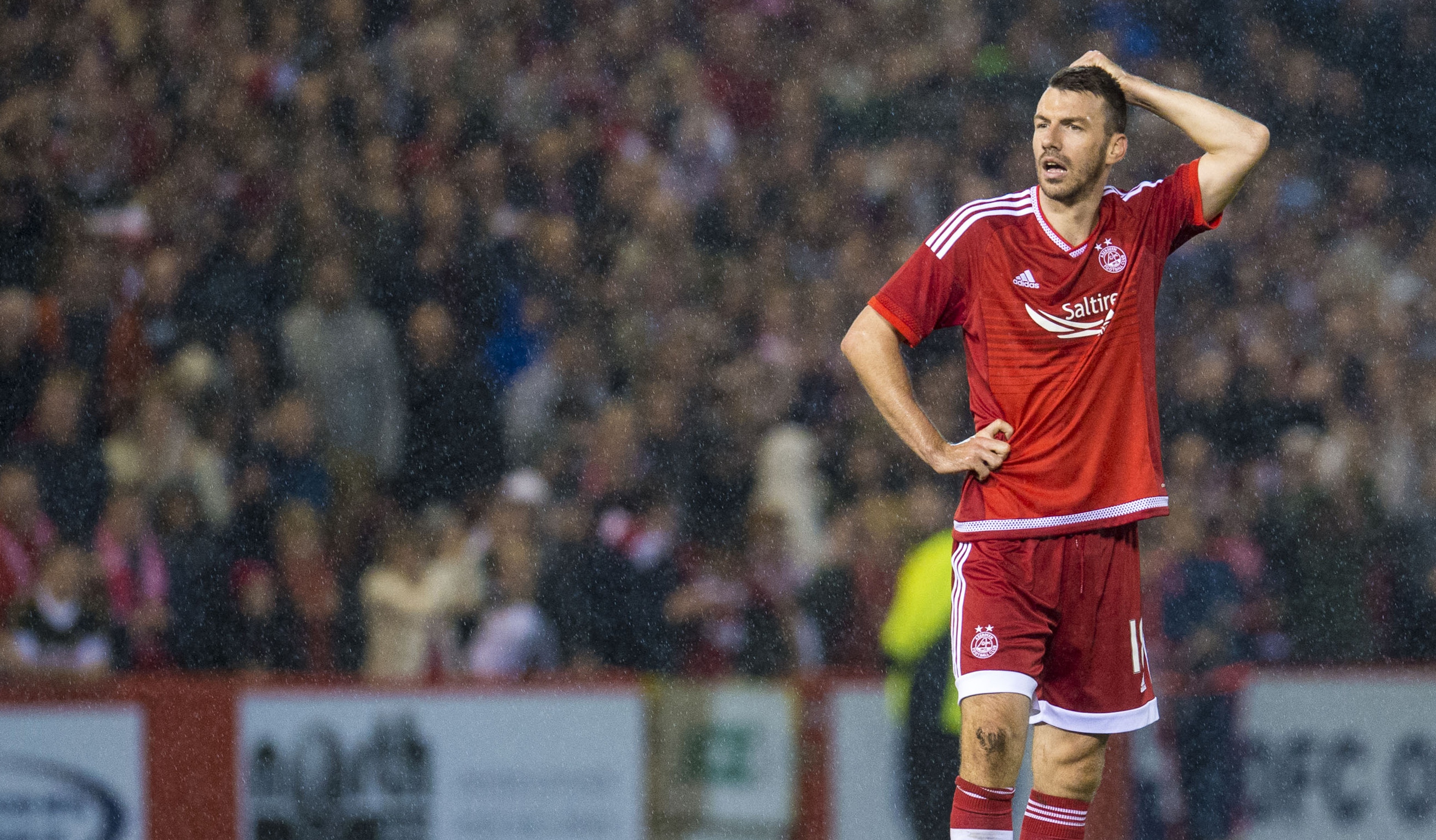 Aberdeen’s European run ended despite a great effort in the closing stages from the Dons at a packed Pittodrie. There was a tremendous atmosphere and a real sense of occasion.

Aberdeen lined up with Ward in goal and a back three of Taylor, Considine and Shinnie. Hayes and Logan were the wing-backs with Jack, McLean and Pawlett in the centre of midfield while McGinn played just off Goodwillie upfront. It was a very attacking line up as the Dons went looking for the goal they need to get through.

In the first minute, there was an early shot from Gohou. Their top scorer, who missed the first leg, placed the shot across Ward but the keeper got down smartly and made a comfortable save. A couple of minutes later, a great break from the Dons led to the first corner of the night. When the ball came over, there was a bit of head tennis in and around the box and a strong appeal for hand ball in the box but nothing was given by Czech referee. It really was a lively start from both teams and on four minutes, Gohou played a great defence splitting pass that found Lunin unmarked. He was one on one with Ward but the keeper did brilliantly to race to the edge of his box and block the shot. He got out so quickly Lunin had no target to aim at. Next, back came the Dons as McGinn’s free kick was cleared and then Logan just ran the ball out of play after a positive run.

After 11 minutes came another penalty appeal. Goodwillie played in Pawlett who was taken down after getting across his man, but nothing was given despite it looking a very strong shout.

After the end to end start, the game became a bit of a midfield battle and Markovic and Tymoshchuk both went into the referee’s book. On 17 minutes, Hayes struck the Dons’ first shot on target when his powerful effort had to be saved by Plotnikov. A few minutes later, the keeper did well again after McGinn put over a very good cross and, at full stretch, he just managed to get a touch and Tymoshchuk was well positioned to head clear. Kairat raced up the park and Isael caused real problems with a probing run. He made his way into the box and in the end, Logan did very well to come across and make a tackle.

On 26 minutes, the Dons came closest to getting a goal in the first half when the ball was flicked on by Pawlett, dummied by Goodwille and Hayes hit a diagonal shot across the keeper but the ball went inches wide.

With half an hour gone, it was a very even contest. Aberdeen were enjoying plenty of possession but the visitors looked dangerous on the break. Aberdeen won a series of corner but the delivery into the box was disappointing. Kairat had a height advantage from set-pieces so if the Dons were going to create problems, they needed to put in better balls.

On 40 minutes, a shot from Bakaev was on target and sneaking into the corner but Ward did well to have his angles spot on. Just before the break, Bakaev was booked for a foul on Pawlett. The same player then fouled Pawlett again.

Aberdeen started the second half very well as they tried to up the tempo. On 47 minutes came a good chance. Logan played in a great deep cross that Pawlett got on the end of, but he could not direct the ball towards goal. Then, on 51 minutes, a half chance for Goodwillie came when he got the break of the ball inside the area but could not produce an opening.

The Dons continued to press. Logan's ball was left by Goodwillie and picked up by McGinn at the back of the area but his shot went into the side netting. Niall then made room for a shot but sent it high and wide. Aberdeen continued to press but were hit with a hammer blow just before the hour mark. Bakaev had an initial effort which Ward did very well to save low to his right but the ball popped up and Gohou was the first to react and he managed to beat Ward.  The goal was against the run of play but in fairness, Kairat had looked dangerous all evening.

After 63 minutes, Pawlett managed to find some space 25 yards from goal but he dragged his shot wide. Two minutes later came a good run from McGinn down the right but again the cross failed to find a red jersey inside the area. That was the story of the night for Aberdeen.

On 67 minutes, Pawlett was replaced by Rooney. Shortly after, a deep cross from Hayes landed at the feet of Logan who fired in a shot which the keeper saved at his near post. At this point there was a lot of time wasting from the visitors that was frustrating the Aberdeen players.

With 15 minutes to go, Aberdeen were trying hard but could find a way through as Kairat were defending well. They were forcing the Dons to cross from deep and Markvic was heading everything away. Again, they forced more corners but the ball into the box was not good enough.

With ten minutes to go, there was a double change when Flood came on for Hayes and Quinn came on for Goodwillie. The manager decided to try route one and put Ash Taylor up front. It turned out to be a tactical masterstroke as the Dons pulled one back. Niall McGinn played over a free-kick – it was the perfect ball to the back post area which found the late run of McLean who had sneaked round the back and his header from close range went past the keeper.

Game on as Pittodrie came to life again.

The grandstand finish almost ended immediately when Serginho hit the crossbar and the visitors also might have had a penalty when they hit on the break and Rooney was forced to chase back.

With Taylor causing mayhem inside the area, the Dons’ long balls were getting knocked down to red jerseys. On one occasion, McGinn picked it up but fired into the side netting. Then fine play by Taylor on the ground saw him pass to McGinn who picked out Rooney, but his header went over.

With a minute to go there was a scuffle in the box as the Dons players grew tired of the timewasting. Ash Taylor and the keeper were booked. The time wasting almost came back to haunt the visitors as the fourth official indicated that five minutes of injury time were going to be played. He received one of the biggest cheers of the night.

On 92 minutes, a knock down from Taylor just went frustratingly behind Rooney. Then the Dons won a corner in the final minute and Danny Ward made his way forward. You felt the Dons would have one more opportunity to find the equaliser they wanted. Niall played over the ball which was missed by Ward by met perfectly by Quinn. The ball appeared to be heading for the top corner of the net but Plotnikov managed to get a hand up and push the ball over. It was a very good save.

The final whistle was met by a standing ovation from the Red Army who recognised their heroes had given everything for the cause.