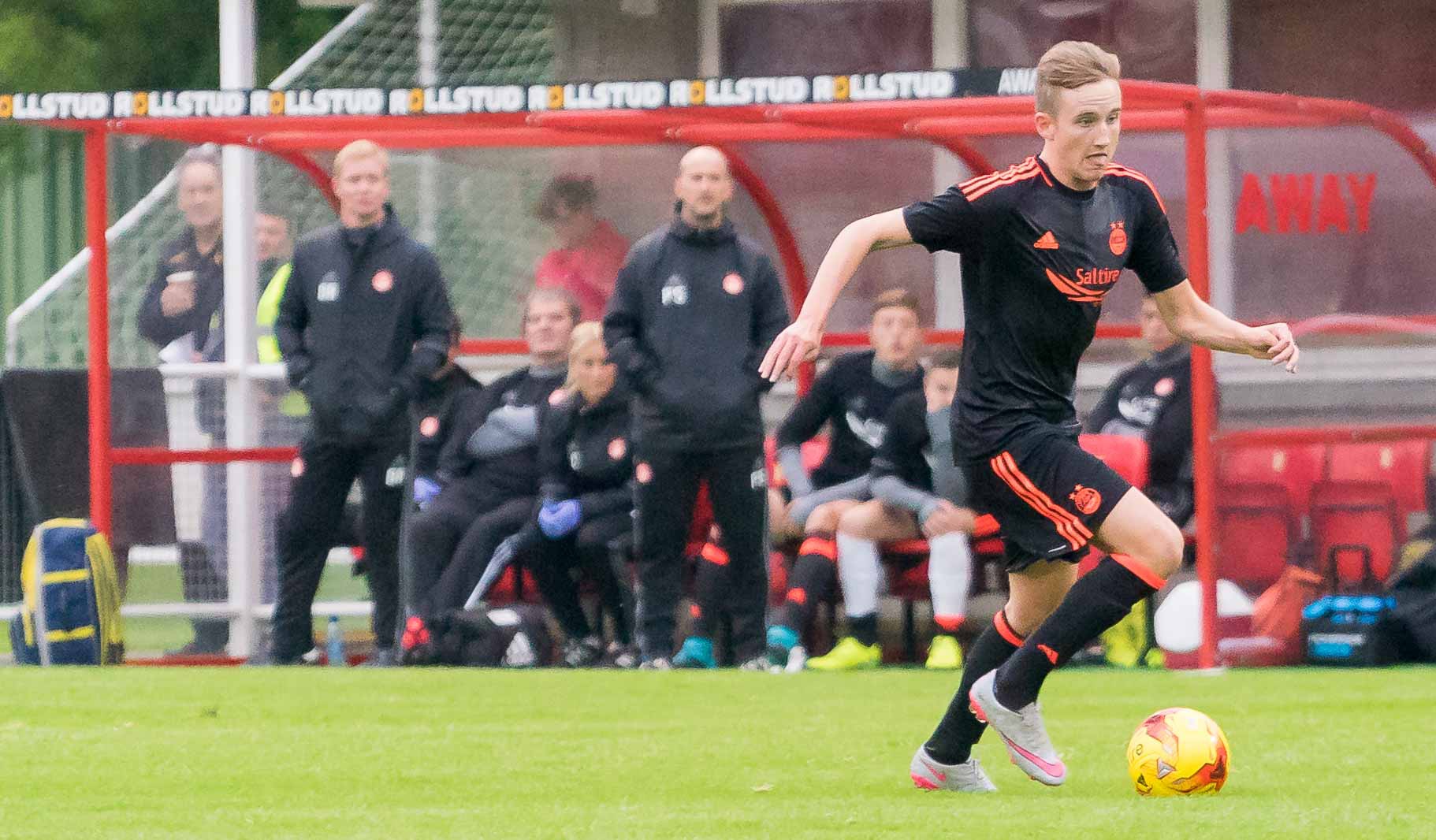 above Par performance from the young Dons 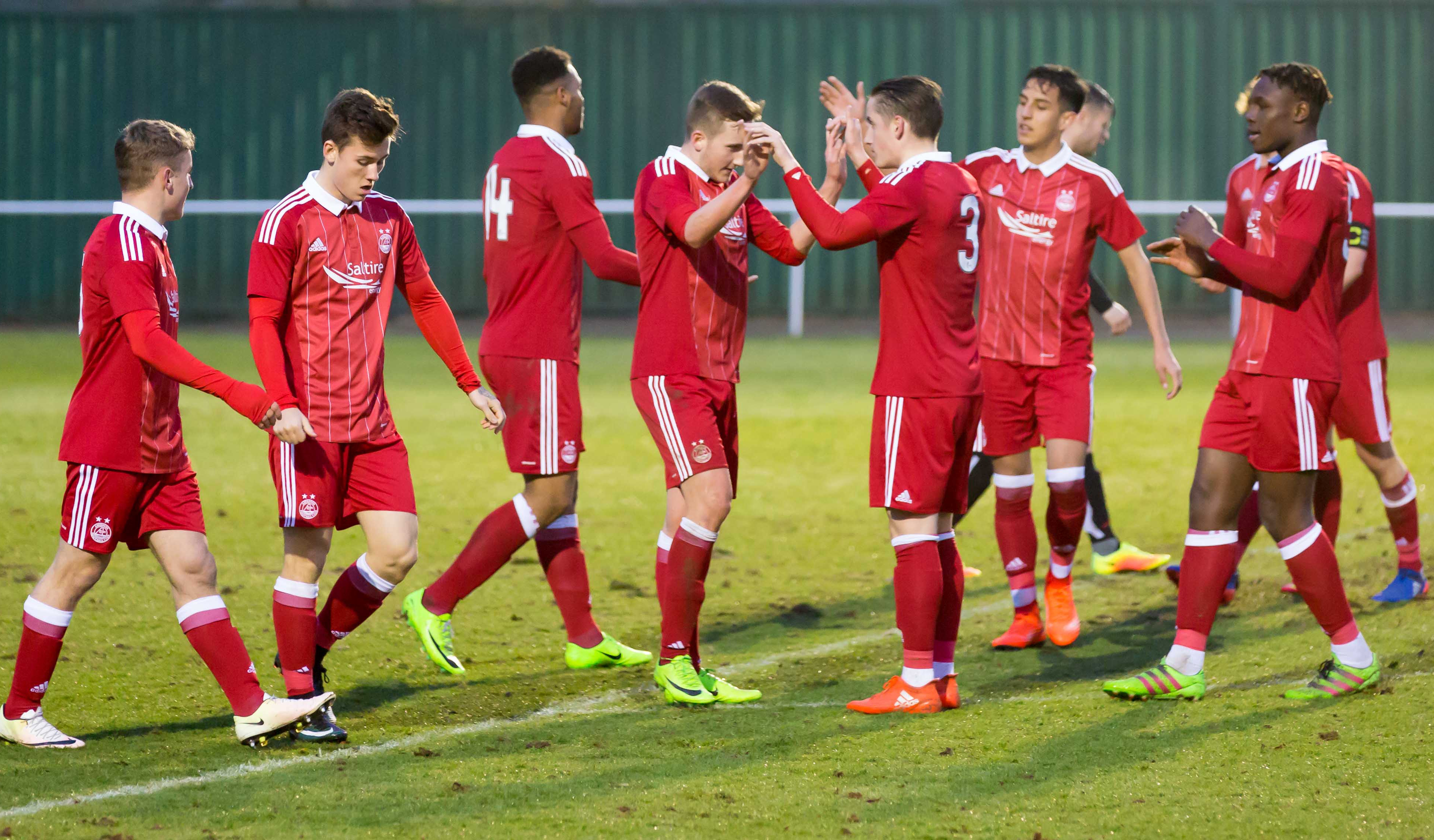 Pitmedden was the venue for tonight’s Development League clash with a Dunfermline side who beat us earlier in the campaign but who could be leapfrogged in the table if the Young Dons could notch a third successive league win.

The Dons forced an early corner after good work on the left by Frank Ross but the Pars defence stood firm and cleared the danger. The visitors came more into the game with full back Ryan Williamson very prominent breaking forward at every opportunity and he came close to opening the scoring with a fine twenty yard shot which was deflected just wide. David Craddock produced a fine save on the quarter hour mark when he tipped a header from Spence over after Fordyce had flicked on Robbie Crawford’s free kick. It had been a bright start from the visitors who forced four corners but were unable to breach the Dons defence.

A splendid challenge from Morrison prevented Connor McLennan breaking free then Scott Wright had a shot blocked after good leading up work from the impressive Frank Ross.

Williamson again threatened the home goal with a shot which found the side netting then just before the break Frank Ross hit a clever free kick which beat Gill in the Dunfermline goal but dipped just too late landing on the roof of the net.

A very competitive first half which the visitors just about shaded with Williamson their main man.

Three minutes after the break Joe MacPherson was cautioned for a tug on the shirt of Luke and he was quickly followed into referee McFarlane’s book by skipper Jamie Henry after a challenge on opposite number Horne.

Good build up play from the visitors created an opening for left back Reece Duncan but his shot didn’t trouble Craddock. Three minutes shy of the hour Aaron Norris fired a powerful effort just over after fine work from McLennan – the home side’s closest thing to a goal.

Indeed it looked like the first goal in this game would be pivotal as there was little to choose between the sides.
Frank Ross saw a shot blocked just before the Dons brought Joe Nuttall on in place of Scott Wright. On 67 minutes Craddock tipped Lochhead’s free kick over the bar then at the other end Nuttall’s dangerous cross into the six yard box was well defended by the visitors.

The breakthrough came on 71 minutes. An awful clearance by Fordyce was seized on by Nuttall who beat keeper Gill in a race to the ball then squared it to Bruce Anderson who found the net at the second attempt.
Frank Ross became the third Don to be booked after a challenge on Williamson just before the visitors brought Owen on for Allan.

Seb Ross replaced McLennan with eleven minutes left and he quickly made an impact firing home a Bruce Anderson cutback from close range to make it 2-0 to the Dons.

The visitors made a double switch bringing on Todd and Robertson for Luke and Duncan but the momentum was now very much in favour of the home team. Following a booking for Horne, Lewis Hutchison replaced Bruce Anderson just before Frank Ross picked up a loose ball and cut inside to fire a fine twenty yard left foot shot past Gill making it three and easy for Aberdeen.

Joe Nuttall’s pace and power were too much for the Pars defence and the big man got his just reward as the match went into stoppage time when he latched on to a Toby Wells through ball to smash the ball high into the net wrapping up a decisive 4-0 win for the Dons.

The visitors’ night went from bad to worse in the closing seconds when skipper Evan Horne was shown a second yellow card after a wild challenge on Frank Ross.

In the end a decisive victory for the home team but Dunfermline will rue missed opportunities in the first half when they were in the ascendancy. Nonetheless a third win on the spin for Aberdeen which moves them up the table and a welcome clean sheet. A good night’s work from Paul Sheerin’s team.