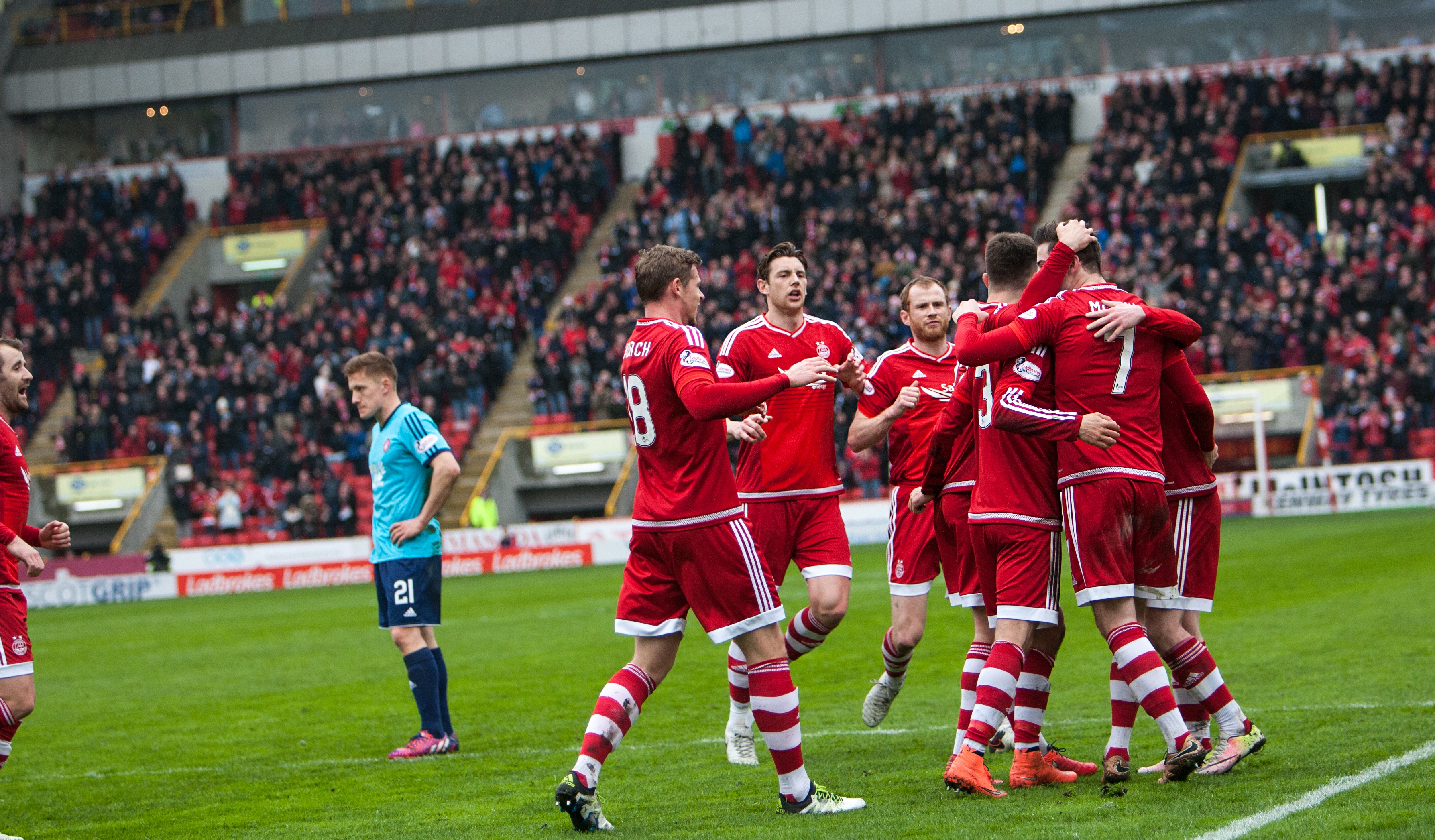 Aberdeen started the day seven points off the top spot looking to keep the pressure on league leaders Celtic. Willo Flood returned to the starting line-up, with Andrew Considine dropping to the bench.

The Dons started the game very positively, with Kenny McLean trying his luck from the edge of the box, only to be denied by the post. The Red Army only had to wait five minutes for the opening goal when a superb ball into the area from Jonny Hayes was met by the head of Simon Church, who netted his fifth goal since arriving on-loan from MK Dons. Aberdeen 1 – 0 Hamilton Accies. (CHURCH)

The hosts looked hungry for more as McLean once again took the ball for a run on the right hand side and was unlucky not to trouble Michael McGovern in the Accies goal. The Dons had completely taken hold of the game and continued to pile pressure on the Hamilton goal, enjoying a lot of possession. Aberdeen were also running riot down the right hand side and could have easily been further ahead at this stage.

They were further rewarded for their efforts after 15 minutes when Niall McGinn picked the pocket of Ziggy Gordon who was caught napping as he waited for McGovern to come for the ball. Niall showed wonderful composure to stroke the ball past international team mate McGovern just as the red army had begun a minute’s applause in memory of to two of their own who had recently passed away, the perfect tribute to James Stewart and Michael McCartney. Aberdeen 2 – 0 Hamilton Accies. (MCGINN)

Hamilton rarely troubled Scott Brown in the Aberdeen goal throughout the 90 minutes, but came close to pulling one back when Dougie Imrie’s square ball across the face of goal couldn’t quite be converted. The Dons were then nearly caught on the break when Greg Docherty’s run from the right gave McGinn something to chase, but Docherty couldn’t make anything of the attack.

The visitor’s attempts to get back into the match were thwarted by a comfortable Aberdeen defence, and the Dons were back on the attack as Shay Logan tried his luck after Graeme Shinnie had started a counter attack from deep. The Dons intensity and confidence continued to cause problems for the Hamilton backline.
Patience was proving to be key as Aberdeen looked to exploit the space opening up all over the pitch. A nice passing from Hayes, lifting the ball over the full back, found Graeme Shinnie on the edge of the box with several options in the middle. Shinnie cut it back to Kenny McLean and the Scotland International hammered the ball home with a first time shot to make it three after 33 minutes. It was looking like it would be an enjoyable afternoon for the Dons, and threatened to turn into a rout. Aberdeen 3 – 0 Hamilton. (MCLEAN)

Accie’s day went from bad to worse as they were forced to substitute Kemy Augstein after 38 minutes, as he was replaced by Danny Redmond. Augstein had been struggling with fitness after a long spell on the sidelines, with manager Martin Canning admitting after the match it was a gamble to start the midfielder.
The Dons coasted through to the break, and were rewarded with a standing ovation as they left the pitch. The score line flattered the visitors, who already looked well beaten.

The second half started with a change for Aberdeen, as Andrew Considine came on for Ash Taylor who was suffering from a strain. The Dons looked like the team most likely to grab a goal as they continued to heap misery on the Hamilton defence. Jonny Hayes went down near the edge of the box clutching his face, but a nice advantage from Kevin Clancy gave McGinn the chance to try his luck.

Hamilton created a few chances, and after 52 minutes Oumar Diaby’s looping header looked goalbound, however
Scott Brown’s diving save kept the difference at three. The first time the Aberdeen goalkeeper had been tested, after a so-far quiet afternoon.

Shortly afterwards the Dons were back on the attack, as McGinn dropped the shoulder cutting inside. His curling shot was pushed away by McGovern. A series of chances for the Dons could have added to the score, as Simon Church was unlucky not to get his second of the game with a  couple of chances and McGinn should have scored after fine play by Hayes but his header from 6 yards out went wide of the target. The visitors were struggling to deal with the pace of the game, with more and more space opening up for McLean, Hayes and McGinn to exploit.

The best chance of the half fell to Willo Flood, his header from five yards out went wide of the post. Willo had his head in his hands, but the assistant’s flag had gone up for offside. The midfielder deserved a goal, he was outstanding today, dictating the pace of the match.

After 77 minutes, Aberdeen made their second change as Craig Storie came on for Willo Flood, who walked off to a much deserved standing ovation for his contribution.

The Dons were rarely troubled in a much quieter 45 minutes of football but still played lots of positive attacking football. Manager Derek McInnes decided to give youngster Frank Ross some deserved game time as he replaced Ryan Jack with 5 minutes to go. Frank has proved his ability in the development side and will be looking to take that form into the senior team.

The game finished 3-0, but it could easily have been more. The Dons who now sit only four points off Celtic, and will be looking to keep the pressure on at Tynecastle on Friday night.