We preview the match against Hibernian 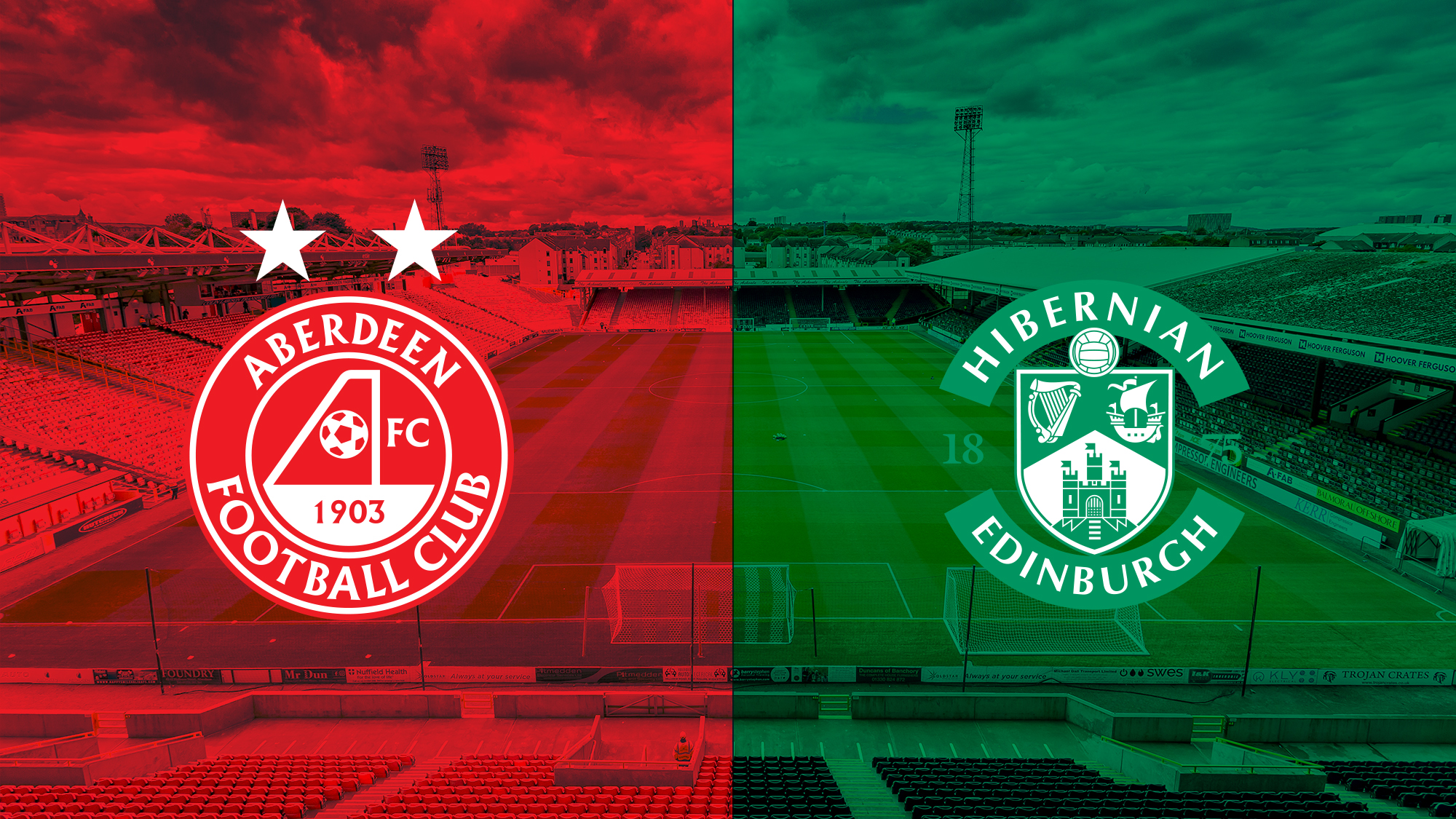 We preview the match against Hibernian

The Dons welcome Hibernian to Pittodrie this Saturday lunchtime for the second meeting of the season between the sides. A Gary Mackay-Steven goal was enough to see off Hibernian at Easter Road back in October and The Dons go into the game in a confident mood after wins over Dundee and St Johnstone in the past week.

After gaining promotion last season, Neil Lennon’s side are battling at the top end of the table and were unfortunate to lose out to Rangers in midweek. They also came very close to ending Celtic’s unbeaten run last Sunday, so the match promises to be an exciting one.

WHAT THE MANAGER SAID

“I think it’s a very good game to be involved in. Hibs have certainly added to the League this year and Neil’s got them going well.

“We’re in a good place, we’re used to being where we are in the league with the experience and hopefully on the back of the last couple of games and performances and clean sheets we take the confidence and set about the challenge of beating a very good team.

WHAT STEVIE MAY SAID

“In near enough every league the Christmas period is the toughest part. It’s ideal here in Scotland because you get that break afterwards so if you have little niggles then you can play through it knowing you’ve got that break at the start of January. We’re going to get a rest and then it’s about going for it and putting everything into each game.

“Hibs have been promising in terms of their football and are a side with a lot of ability with the potential to hurt you. It was a hard-fought game when we beat them at Easter Road, but one of our stronger performances this season. We know we’re in for a tough challenge tomorrow and one we’re up for.

“Tomorrow’s a big game and there’s a few challenging around that area and it’s down to us to show how good we can be. We know they can cause problems, but it’s got to be all about us.”

The head to head record reads more favourably for Aberdeen with 148 wins in 344 games. Hibernian have 108 wins and there’s been 88 draws between the clubs. At home, The Dons tasted victory 85 times with Hibernian’s last win at Pittodrie coming in 2-1 win in May 2012.

The last time Aberdeen and Hibernian locked horns at Pittodrie was in January 2014 on a Friday night under the lights. A tense game looked destined to finish 0-0 until Willo Flood unleashed a powerful strike from 25 yards to win the game in the 86th minute for The Dons. Hibernian were relegated that season and wouldn’t meet The Dons until a League Cup tie in 2015.

Click here to watch the highlights from that game

The first ever televised match at Pittodrie took place in season 1959/60 and was an Aberdeen V Hibernian match. On Boxing Day, The Dons team, led by manager Tommy Pearson won a remarkable match 6-4 in front of a crowd of 15,000. All six goals from Aberdeen were scored by six different players.

If you can’t make it to the match on Saturday, join us on RedTV from 12.15pm for live coverage including video on RedTV International. After the match we will have all the reaction, highlights and a full-match replay.

ENJOY THE GAME AND STAND FREE!

Aberdeen welcomed Hibernian to Pittodrie hoping to build on their previous wins over Dundee and St. Johnstone in the past 7 days. This was the second meeting between the sides this season, with the Dons edging the first 1-0 down in Edinburgh in October. 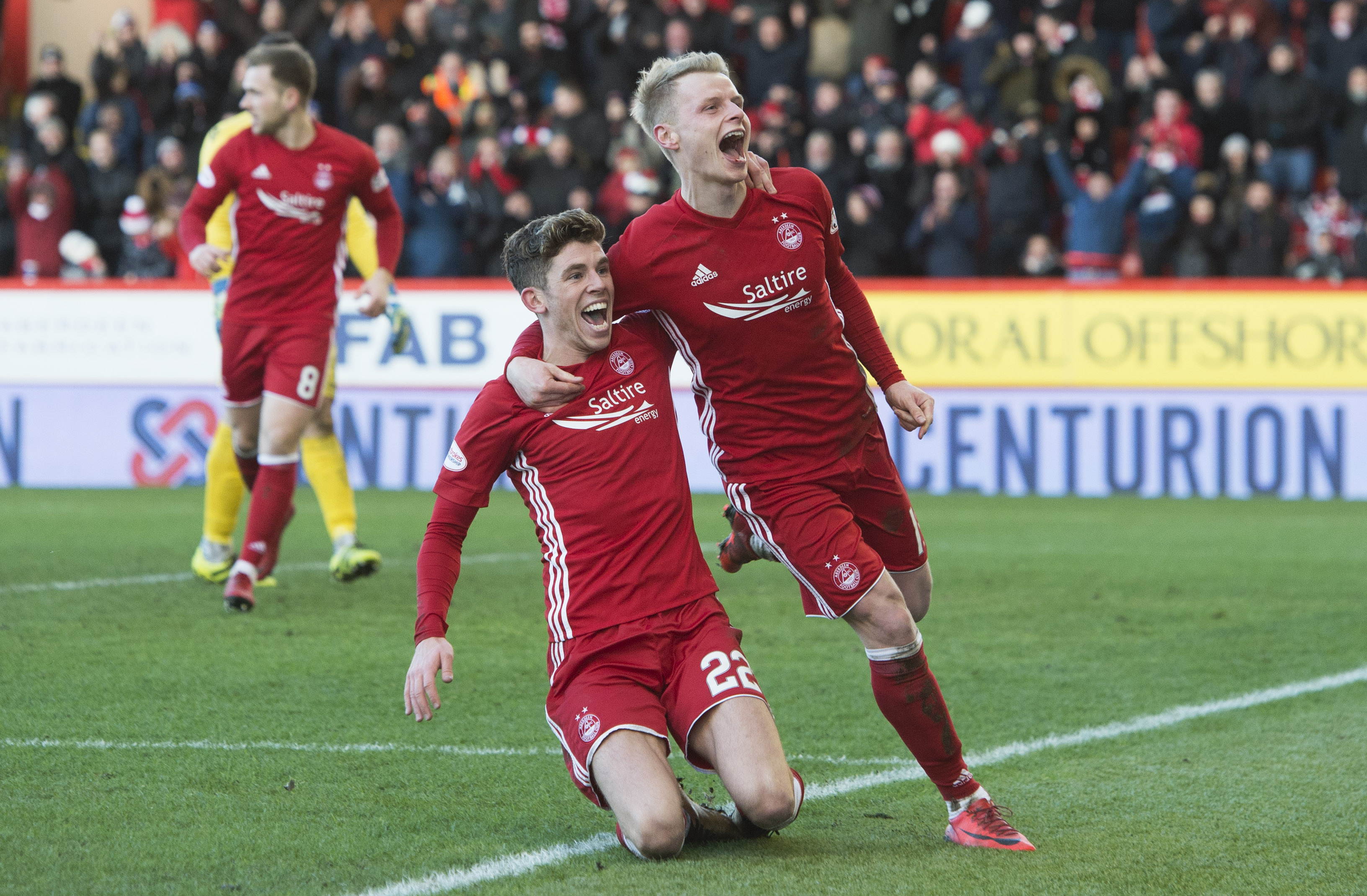 Aberdeen welcomed Hibernian to Pittodrie hoping to build on their previous wins over Dundee and St. Johnstone in the past 7 days. This was the second meeting between the sides this season, with the Dons edging the first 1-0 down in Edinburgh in October.

Gary Mackay-Steven’s goal was the difference that day, and he was welcomed back to the starting XI for this afternoon’s tie, replacing Greg Stewart who dropped to the bench. Andrew Considine in for Kari Arnason was the only other change that McInnes made to the side that beat St. Johnstone 3-0 at McDiarmid Park midweek.

Brandon Barker and Marvin Bartley were the two changes made to Neil Lennons side that lost to Rangers in midweek.

A crowd of nearly 15,000 supporters braved the ice and cold to make it to Pittodrie as Hibs got things underway. They started positively, dominating possession in the early stages, winning a free kick and a couple of corners in the opening 5 minutes but all of which were comfortably dealt with by the home side.

Aberdeen began to find their feet and Gary Mackay-Steven looked lively down the left hand side.

After a fairly low key 10 minutes, the Dons got the breakthrough. Stevie May forced the Hibs goalkeeper Marciano into punting the ball out for a throw-in when he could’ve picked it up in his box. From the resulting throw-in, McLean hit a lovely crossfield pass to GMS arriving in the penalty area. The Dons winger’s first time lay off was perfectly placed into the path of Graeme Shinnie, who fired home smartly to give Aberdeen the lead. A terrific team goal finished off by the Skipper.

The next 10 minutes were frantic. Aberdeen pressed and rushed Hibs into conceding possession on multiple occasions. Both GMS and Ryan Christie looked lively down the flanks, with May, Shinnie and Christie all having shots on goal as the Dons pinned Hibs in their own half.

The Dons were resolute in defence with Considine making a number of timely tackles to stub any potential Hibs attacks. Brandon Barker had the first shot on target for Hibs, but his shot from 25 yards did little to trouble Joe Lewis in goal.

With half an hour gone Neil Lennon’s side grew back into the game. Hanlon went close for the Edinburgh side, following a free kick which was staright from the training ground. The Hibernian centre half was unable to direct his header goal bound.

Aberdeen nearly doubled their advantage moments later as Christie released Shinnie through the middle. The Dons captain had both GMS and May on either side of him but opted to shoot instead when the pass was maybe the better option.

With the clock on 35 minutes the Dons doubled their advantage. Shinnie played the ball outside to Considine who played a neat ball into GMS on the edge of the penalty area. The Dons winger twisted and turned, nutmegging Darren McGregor to find a yard of space to get his shot away. His shot was at Marciano but had enough power on it to beat the ‘keeper, who could only deflect it onto the post and in.

Aberdeen were growing in confidence and it was showing. Kenny McLean had the time to take down the ball on the edge of the area but was unable to divert his effort on target, firing it wide.

Just before the break Gary Mackay-Steven added his second and Aberdeen’s third goal of the day. Efe Ambrose was caught dwelling on the ball inside his own half, giving up possession to the Dons winger. He needed no second invitation to thunder in on goal, finishing smartly past Marciano.

On the stroke of half time Joe Lewis was called into action. John McGinn thought he had scored as his snapshot from the edge of the box was heading for the bottom corner but Lewis got a strong left hand on it to tip it out for a corner and preserve Aberdeen’s deserved 3-0 lead at half time.

Out came the teams after the break and The Dons remained unchanged whilst Hibs made two; Anthony Stokes and Steven Whittaker on for Darren McGregor and Marvin Bartley.

Hibs started the second half like they did the first, enjoying the lion’s share of possession but doing little to trouble Joe Lewis in goal.

With 57 minutes on the clock, Aberdeen made their first change. Greg Stewart replaced Adam Rooney, who had put in a solid shift. Aberdeen weathered the Hibs storm and began to take control of the game again and just after the hour mark The Dons added a fourth.

Mackay-Steven played a smart one-two with Stevie May. Cutting in from the left hand side, the goal opened up for GMS who fired an unstoppable shot in off the far post to complete his hat-trick in fine style.

The man of the match received a well deserved standing ovation when he was replaced in the 69th minute by Scott Wright.

The Dons showed no signs of taking their foot off the gas, capitalising on some questionable defending they continued to open up the Edinburgh side. Shinnie was immense in midfield, breaking up the play effectively and strolling the game in the middle of the park.

Derek McInnes made his final change of the afternoon, Nicky Maynard replacing Stevie May for the final 12 minutes of the encounter.

Aberdeen had the ball in the net again through an Andy Considine header following a well worked free kick. However the linesman ruled the Dons defender offside and the goal was chalked off.

Hibs added a consolation in the 88th minute. Anthony Stokes right footed shot was deflected unfortunately off Graeme Shinnie and past Joe Lewis, the only negative in what was a terrific performance from the Dons.

The Dons were thoroughly deserving of their 4-1 victory. Ending Neil Lennon’s unbeaten away record in fine style, extending the gap between them and the Edinburgh side to 9 points. The Dons will be hoping to build on their three back to back wins when they take on Celtic next week at Celtic Park.