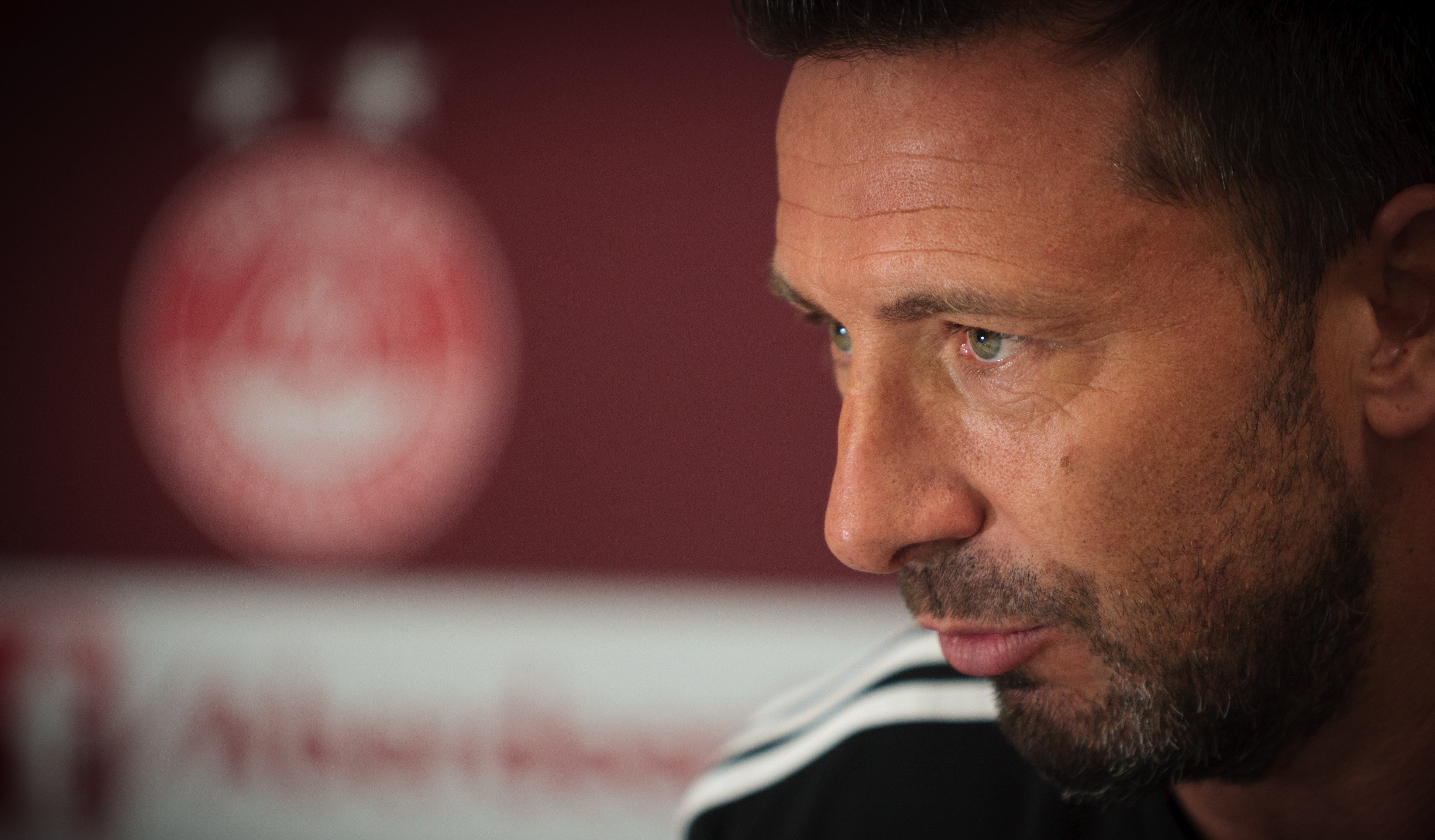 “We are in a strong position as the score line suggests. It would be wrong for us to think the job is done. There is still work for us to do.

“The way we approach the game has to be similar to the way we approached the first leg. That is trying to deny good players who have real quality any opportunities, having a level of organisation and concentration that is needed when you are playing against a level of player which they have.

“At the same time we have to try and be positive when we get the ball and have to go and try and score a goal just as you would normally do. We do not want to play at home and have to defend and defend for 90 minutes.

“We have to be solid but still have an attacking threat.

“I thought we did that well enough in the away tie and we were delighted with the score in the end. We would not have anticipated that level of score line. It is only half time though. 3-0 leads have gone before in 45 minutes. They have a full 90 minutes to try and get back into the tie.

“In every game we try to be respectful and show opponents respect. We try to manage what needs to be managed. The players are well aware there is a lot of work still to do. The players more than anyone are aware because they played against some good players last week. The level of concentration has to be there.

“The reality is that they are more than capable of scoring three goals. They have shown that in the past. They have a good pedigree in Europe over the past few seasons. They have dealt with a lot of top sides so they deserve that level of respect. They were huge favourites to get through this tie. They could have been a couple of goals ahead before we got going. They have enough attacking threat and a style of play that will always allow them to create chances.

After a first half where the Dons had managed the game brilliantly, all of a sudden after an hour it was game on. Two quick goals for the visitors, who showed just how much quality they have in their side tonight, and Pittodrie became very nervous.

After a first half where the Dons had managed the game brilliantly, all of a sudden after an hour it was game on. Two quick goals for the visitors, who showed just how much quality they have in their side tonight, and Pittodrie became very nervous.

However this Aberdeen side is made of stern stuff. As well as having real quality they have the mental strength to cope with these situations and minutes after the second goal from Rijeka Niall McGinn popped up to score with a great strike.

Pittodrie erupted. In reality the tie was safe, however the Dons made sure of their passage into the next round when the outstanding David Goodwillie set up Jonny Hayes, who had missed a great chance 1-0.
Aberdeen now take on Kairat Almaty in the third qualifying round. They travel to Kazakhstan next week and then play the return leg at Pittodrie on Thursday 30th July.

The Dons started this match with a three goal lead from the first leg and Derek McInnes decided to stick with ten of the eleven players that started that victory in Croatia. One of the goalscorers on the night, Peter Pawlett, was replaced by another of the goalscorers in Rijeka, Kenny McLean.

Despite the change in personnel Aberdeen lined up in the same formation that worked so well aganst Rijeka in the first leg with Quinn, Considine and Taylor operating as a back three in front of Ward. Hayes and Logan provided the width playing in the wing back positions with a middle two of Shinnie and Jack.

That meant that the onus for an attacking threat fell on McGinn and McLean to support Goodwillie in the lone striker role.

The start of the match was in stark contrast to the tie in Rijeka as The Dons were able to impose themselves on the game and dominate possession. Chances were few and far between in the first fifteen minutes but the home side looked more likely to get on the score sheet with Hayes and McGinn putting in a couple of decent deliveries to force corners.

Having said that neither keeper was really troubled, the first real effort on goal ca

me from Moises in the 19th minute which Ward was able to watch trickle wide of the post from 30 yards.

The first clear cut chance of the game looked to have fell to Goodwillie after he pounced on a loose ball across the defence 35 yards from goal. Just as the striker was set to take on the last defender and hit a strike on goal the linesman put up his flag for a handball which was probably the correct decision.

The Croatians were finding it hard to break Aberdeen down and The Dons were finding spaces to counter without really getting the final pass right. With 30 minutes played Ward hadn’t had a save to make with the back three mopping up anything that made its way past the midfield.

In the 34th minute The Dons played a ball into the channel which Goodwillie did well to win, the striker held the ball up for Hayes and he whipped an excellent ball right across the six yard box which just evaded McLean at the back post.

A couple of minutes later McGinn forced another corner, his delivery was met by Taylor but the referee blew the whistle for a foul to Rijeka. Up the other end Quinn had to be sharp to sweep up after Mitrovic played a teasing through ball for Roshi, fortunately for The Dons the centre-half got across well to tackle.

Goodwillie was again causing problems and able to play in Hayes once more, with bodies arriving in the box he chose to float the cross in on this occasion with no red shirts able to get on the end of it.

Just before the half-time break The Dons got their best chance of the half as McGinn made his way onto a knockdown from McLean and hit a half volley with his left foot twenty yards out from goal. Unfortunately the
Rijeka keeper Sluga got across well to parry the ball away from any incoming strikers.

Taylor got on the end of another corner just minutes after the restart but this time it was slightly behind him and he couldn’t direct the header on goal. Up the other end Bezjak looked to wriggle free in the box but there were enough red shirts around him to force a rushed shot over the bar.

The away side made a change in the 51st minute as Kvrzic replaced Roshi. At this point it looked as if Rijeka wouldn’t be able to recreate the sort of dominance of possession that they enjoyed at home regardless of what changes they made.

In the 57th minute however the away side did make the breakthrough when Tomasov found space just inside the box and slotted the ball past Ward with a perfectly placed left footed strike.

The Dons almost levelled immediately when Jack led a counter-attack with some great composure, he then found Goodwillie wide on the right who floated in an inch perfect cross for Hayes at the back post.  It looked as if Hayes was going to find the back of the net from 6 yards but unfortunately he didn’t get the right contact and headed the ball just wide of the post.

In the 61st minute Tomasov got on the ball again just outside the area and tried to curl one into the same corner, the strike was a bit more central this time and Ward was able to gather with relative ease.
In the 62nd minute a long range strike from Rijeka’s number eight Kvrzic found the back of the net with a deflected strike which went in off the underside of the bar from 35 yards. It was horrible defection. The visitors no doubt sensed a comeback at this point as the whole bench leapt on to the pitch in celebration and an eerie silence filled Pittodrie.

With a nervy 30 minutes looking likely The Dons were handed a reprieve in the 64th minute when McGinn raced onto a ball into the right hand channel and volleyed the ball in off the post from just inside the box. It was a real moment of quality from Niall to take a bit of pressure off at a key moment in the tie.

In the 71st minute The Dons drew level on the night when Goodwillie capitalised on a slack header on the halfway line to race clear of the defence, the striker was unselfish and did exceptionally well to hold the ball up to play in Hayes who made no mistake to place the ball past Sluga from 8 yards.

On the balance of play Aberdeen deserved to be on level terms but the way that Rijeka suddenly found themselves with a two goal lead was an example of how quickly European ties can turn.

The second goal was the signal for both sides to re-shuffle the pack. Derek McInnes made his first change of the night when Pawlett replaced McLean, for Rijeka Balaj replaced Bradaric. The Dons manager waited a couple of minutes before replacing Goodwillie with Rooney, the striker may not have got on the scoresheet but he certainly played his part spearheading the attack with great success.

He was simply outstanding.

After a crazy period in the match the play settled back down with neither side really threatening the goal. McInnes made his third and final change

in the 82nd minute when Flood replaced McGinn to help close out the tie.

The Dons comeback really knocked the stuffing out of Rijeka and the home supporters in the crowd of 15,803 were able to enjoy the closing stages of the match with a three goal cushion restored. The away side were reduced to shooting on sight from range and weren’t able to find the same sort of luck that saw Kvrzic’s strike fire them two in front.

Now well into injury time the supporters in the singing section called on the manager to give them a wave and he duly obliged with a tie against Kazakh side Kairat Almaty in the next round in the bag.
Tomasov had one last strike at goal but Ward was able to watch on as his free-kick from 25 yards went over the bar.

Despite a second half scare it was a good night’s work from The Dons who can be pleased with their efforts over two legs to beat a very good Rijeka side. The Croatian side will have had ambitions of going a lot further in the tournament but there can be no doubt that Aberdeen deserved to progress at their expense.