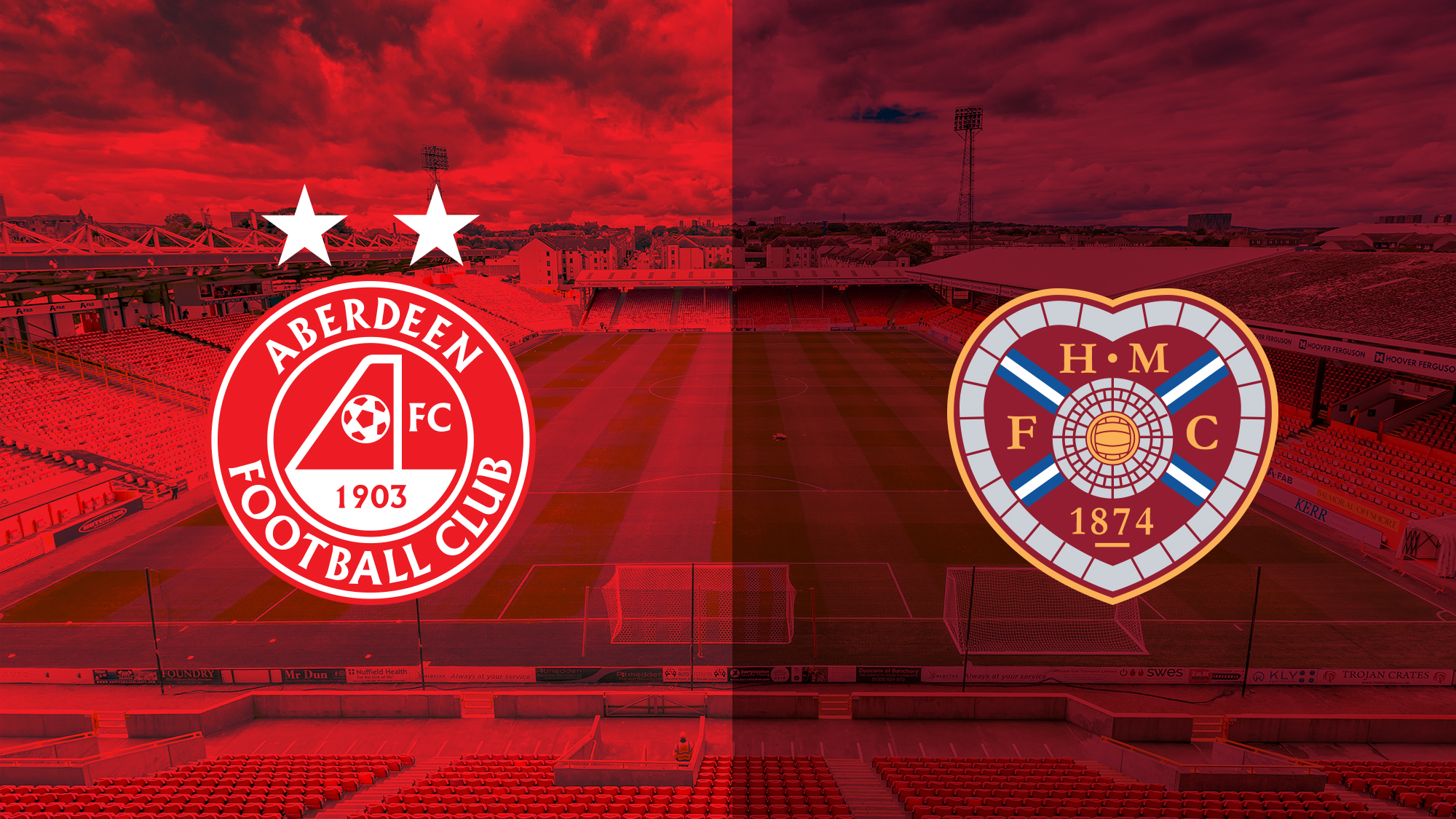 This Friday sees Aberdeen round off their Pittodrie campaign with the visit of Hearts. The Dons will be looking for back to back wins against both halves of Edinburgh in the final two weeks to give them the best possible chance of clinching third place and a return to European football.

After the defeat to Celtic last weekend, The Dons slipped to fourth in the table when Kilmarnock netted a late winner at Tynecastle to leapfrog Derek McInnes’s side on goal difference.

Quotes from the press room 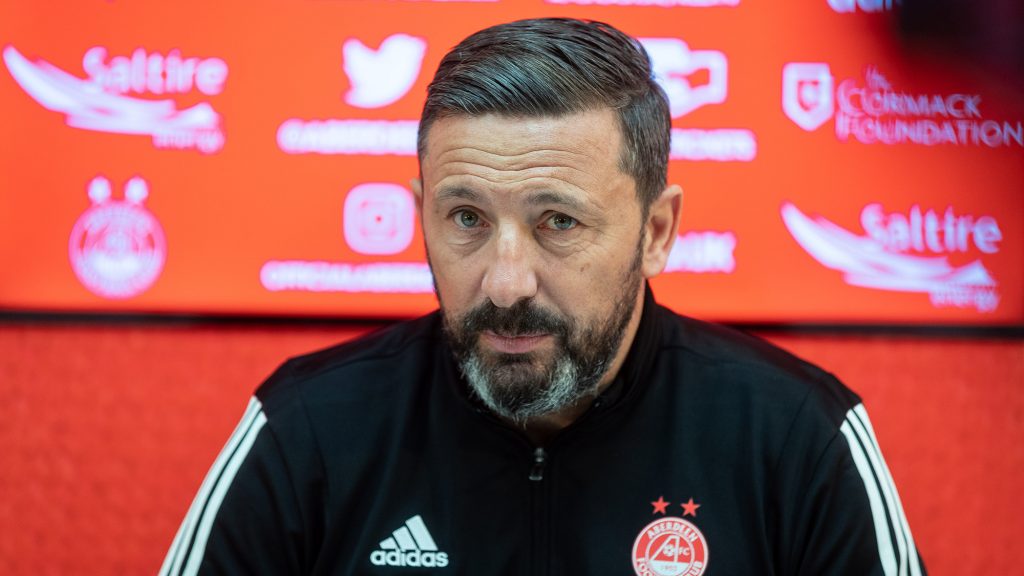 “I think Craig’s quite right to focus his priority on the cup final, but it’s important he gets his team playing well with the confidence going into the game. They’ve done great to get to the cup final and there’s a bit of envy there that we’ve not got that to look forward to, but the way I look at it is we’ve got two cup finals through our league business and that’s what we’ll be trying to treat these games as.

“We said it would come down to the post-split fixtures for how the league would play out. You’re playing against the teams in and around you and also the best teams, which offers the toughest challenge. We dealt with the first game in the split and we’ve lost to the Old Firm. We’ve now got to make sure we have no hangover from the defeat on Saturday and just go deal with the game ahead of us.

To read the manager’s quotes in full click here 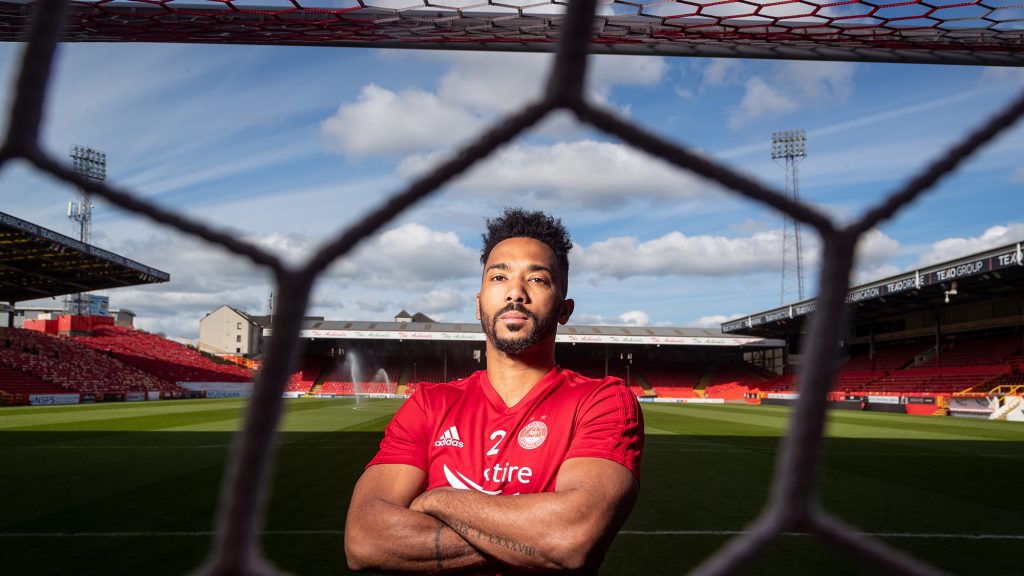 “It’s been frustrating, but it’s really good to be back.

“It seems to have gone a lot quicker than I thought and I’m just a bit sad there’s only a few games left of the season. It’s a season where everyone feels they need to now recharge the batteries.

“It’s going to be a feisty game, but we are looking forward to the challenge. We’re always confident of beating them when we’re at home and they’re probably the same when they’re home.

“We need a good support from the fans to give us that 12th man to get us over the line.

“It is a huge last two games.

“We have to win our next two games and see where it takes us. I am sure if we do that we will be in a good position to finish where we want.

“We have already done well against both Edinburgh teams in games this season. Certainly we played well against Hearts here and we have won at Easter Road. We will draw on those experiences to give us confidence despite coming off the back of a couple of difficult results. 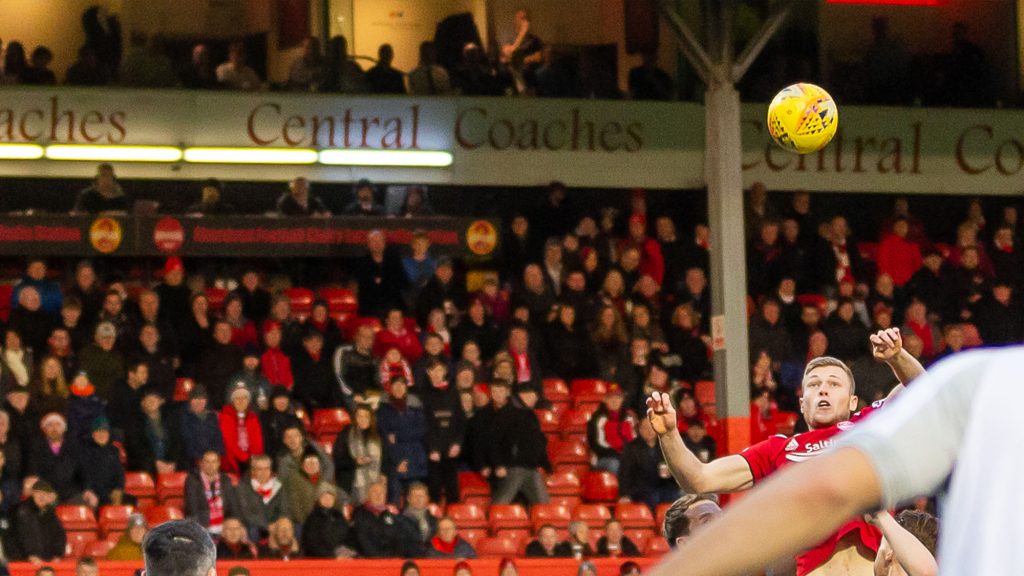 Friday will be the fourth and final between The Dons and Hearts, with the men from Gorgie holding the slightly better record. Two defeats at Tynecastle have left Aberdeen empty handed on their travels to the capital against Hearts, with the last visit in March a frustrating afternoon given they had led.

The first meeting ended with a 2-1 win for the home side with Gary Mackay-Steven’s penalty not enough for The Dons to mount a comeback, as Hearts continued their strong start to the campaign.

The Pittodrie clash three days before Christmas saw Sam Cosgrove continue his hot streak with a double in 2-0 win, with his first coming after only a minute on the clock. He finished the job late in the second half with a penalty and Hearts finished the game with ten men after Mitchell saw red.

An excellent first half at Tynecastle in March had Aberdeen in control after Connor McLennan’s early header. They were good value for their lead, but the game turned on it’s head when Sean Clare scored the fixture’s fifth penalty of the season, the sixth that had been awarded. Ikpeazu blasted home the winner with 13 minutes remaining to consign The Dons to defeat.

This will be the 136th league meeting between the sides at Pittodrie and The Dons hold the better record with 61 wins compared to the Jambos’ 43. The points have been shared on 32 occasions.

Under Derek McInnes The Dons have seen off their opponents four times and each victory has brought a clean sheet. 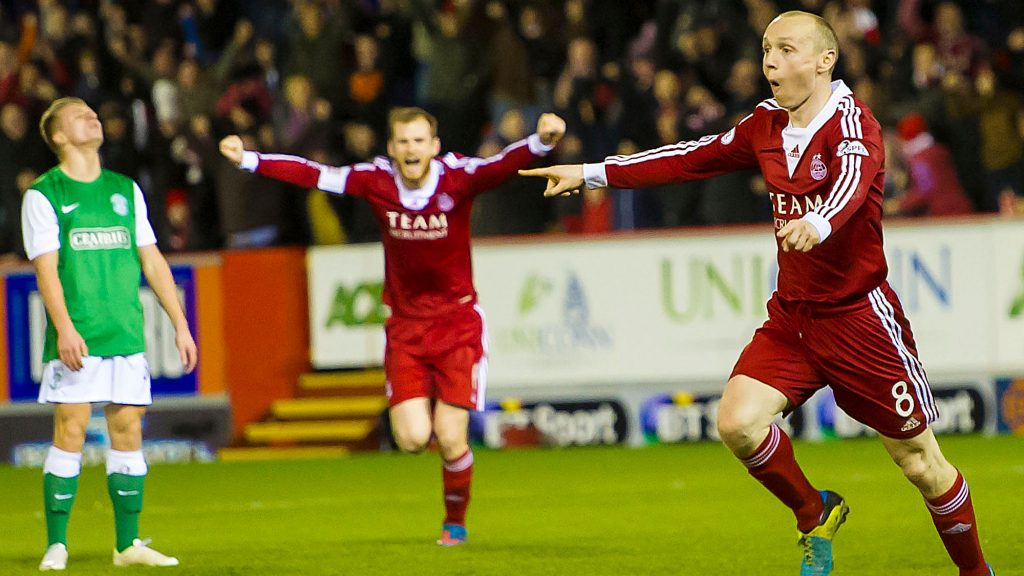 This will also be the 16th Friday night fixture The Dons have played under the current regime and it’s a slot they have fared well in over the years.

There have been ten wins, two draws and four defeats with the first coming back in the 2013/14 season. A memorable 25 yard strike from Willo Flood was enough to see off Hibs under the lights at Pittodrie.

Our last Friday fixture came earlier this season against the same opponent. Gary Mackay-Steven, from similar range as Willo, latched onto a slack pass from the Hibs defence and rifled home to claim the points in a 1-0 win.

If you can’t make the match make sure to tune into our RedTV coverage from 7.30pm. UK & Ireland subscribers can listen to live commentary with international supporters having live video.

Thank you for the fantastic support at home this season. Enjoy the game and come on you reds!

Derek McInnes made two changes to the side to take on Hearts with Shinnie and Stewart returning to the side in place of May and Devlin. 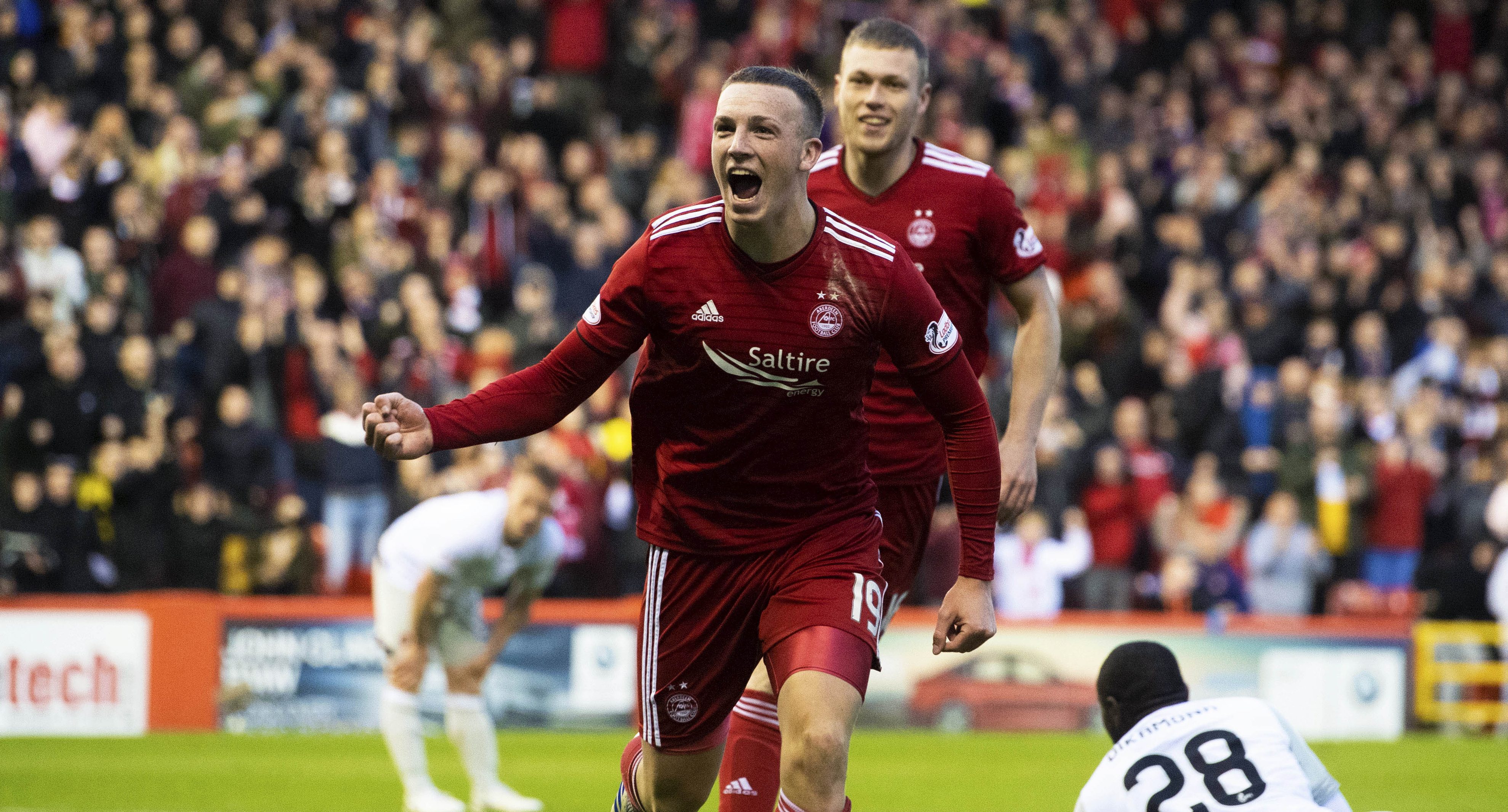 Derek McInnes made two changes to the side to take on Hearts with Shinnie and Stewart returning to the side in place of May and Devlin.

Hearts came into the match without a number of key players and with little to play for in the league, but with Craig Levein in charge, Aberdeen would have to fight from the start and do the ugly side of the game well to get a foothold in the match.

The opening 20 minutes passed without much incident, with Bobby Madden the busiest man on the park, blowing his whistle on a regular basis to pick up on fouls which were preventing any decent moves breaking out.

Bobby Burns picked up the first yellow card of the match in the 21st minute for a foul that stepped over the threshold of all those that had gone before.

A few minutes later Aberdeen had their first spell of real pressure as Shinnie, Lowe and Ferguson combined down the left before squaring the ball for Cosgrove, unfortunately the striker couldn’t get his shot away. Moments later an inventive ball over the top from Ferguson almost found Stewart but Doyle was quick off his line to collect.

In the 26th minute Stewart had a good sight at goal from 20 yards but dragged his shot past the near post.

With ten minutes of the half remaining The Dons won a free-kick on the right hand side of the box, the ball was fizzed in to a dangerous area by Stewart but the visitors managed to turn the ball away from imminent danger for a corner. From the corner, the ball broke wide for Shinnie but his shot was dragged wide of the far post leaving Doyle untested.

The first shot on target of the game came from the visitors when Bozanic saw a shot deflected straight at Joe Lewis.

With a couple of minutes of the half remaining there was a scare for Aberdeen as Lewis took a sore one after being caught late on his knee, thankfully after receiving some treatment the stopper was able to continue.

The second half began with Clare booked for a late challenge on McKenna and he was quickly followed into the book by Considine, it looked a bit harsh as he was adjudged to have caught a Hearts player with his elbow.

The first strike of the half came from The Dons when Cosgrove was played through by Ferguson, the striker was one on one with the keeper and made a good connection, but it was too central and Doyle made a decent stop.

Just before the hour mark Aberdeen had the lead as Ferguson reacted quickly in the area to fire a loose ball past the keeper on the half volley, the youngster reacted quickly and was rewarded for his composure with the goal.

Cosgrove almost doubled the lead minutes later when he showed good strength to shake off a couple of Hearts defenders before unleashing a powerful strike towards the far post but the keeper was equal to it.

In the 64th minute Hearts equalised when the ball was worked from a throw-in to the back post via a couple of flick on’s in the box to Burns at the back post. The full back then squeezed the ball past Lewis, it was a scruffy goal but you had to hand it to the visitors for committing so many players into the box and finding the spare man who was unmarked.

Aberdeen were forced to make a change with twenty minutes remaining as Considine went off with an injury, he was replaced by Devlin.

The Dons almost regained the lead when Lowe got to the byline and fired the ball across the six yard box, it could have ended up anywhere after a deflection but was cleared off the line.

Thankfully Aberdeen did not have too long to wait to regain the lead as Stewart made a great connection from a cross in the 76th minute to find the top corner of the net.

Dikamona then became the latest player to be booked for the visitors for another late challenge. The home side then had a free-kick 25 yards from goal after a foul on Shinnie. Unfortunately, Stewart’s effort could not beat the wall.

Stewart then had an opportunity to put the game beyond doubt after juggling the ball in the area but he could not find the target from a narrow angle. It was Stewart’s last action of the game before he was replaced by May.

In the 87th minute there was an opportunity for the visitors as Maclean broke the offside trap and knocked the ball past Lewis who brought him down just outside the area. Hearts argued for a red card for Joe but they had to settle for a yellow card and a free-kick which was fired well over the bar.

There was still time for one more yellow card in the 90, as Maclean picked up a yellow card for an aerial challenge with McKenna.

As the match entered added time everyone in the stadium was anticipating an aerial bombardment from the visitors. The Dons had to deal with a couple of high crosses and long throws but they did it with ease to see out the match and seal three points to move back into third place in the league.