Aberdeen put the pressure on both Hibs and Rangers in the battle for second spot after a comfortable 2-0 victory over Heart of Midlothian at Pittodrie this evening. 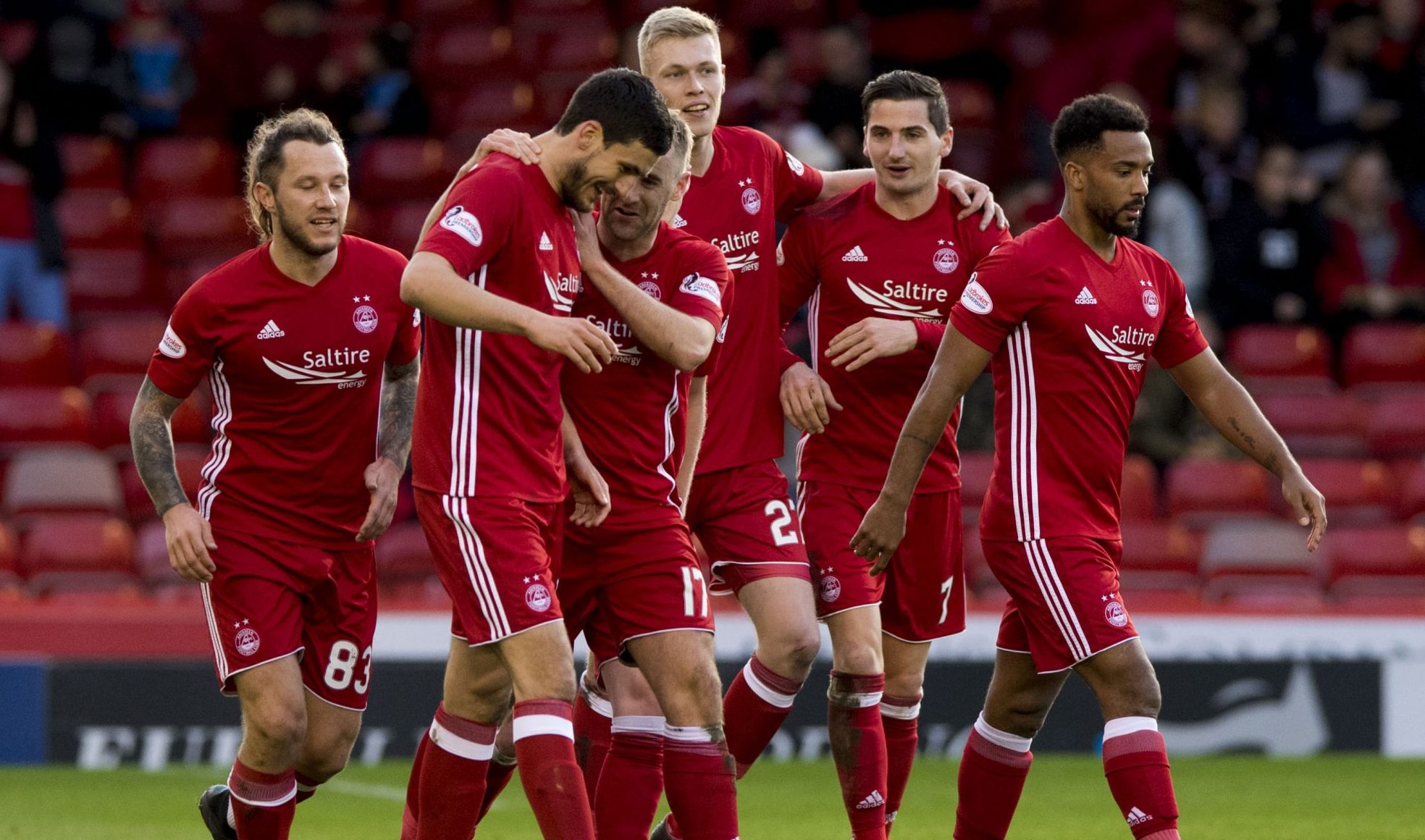 Aberdeen put the pressure on both Hibs and Rangers in the battle for second spot after a comfortable 2-0 victory over Heart of Midlothian at Pittodrie this evening.

First-half goals from Anthony O’Connor and GMS were enough to see off Hearts in what was a thoroughly professional performance from The Dons. Aberdeen now sit three points clear of Rangers, and six clear of Hibs having played a game more, in the race for second place.

McInnes made three changes to the side that overcame Kilmarnock 2-0 at Rugby Park, with Sam Cosgrove earning his first start for The Dons. Niall McGinn and Gary Mackay-Steven also returned to the starting XI with Mark Reynolds, Ryan Christie and Greg Stewart dropping to the bench.

After nearly a months rest-bite the surface looked in far better condition as The Dons got the tie underway in the late Friday evening sunshine.

Shinnie had the first half chance of the game, a shooting opportunity outside box produced a fine save from McLaughlin in goal.

After a slow start to the tie, The Dons made the breakthrough just after the twenty-minute mark with Sam Cosgrove proving his worth in the starting XI. The forward utilised his physical presence in the penalty area nodding down McGinn’s corner into the path of Anthony O’Connor who swept home from 6 yards out.

McGinn nearly doubled their advantage moments later. The Northern Irishman got the final touch on Stevie May’s whipped in free kick, but McLaughlin got down well to keep the scoreline 1-0.

The Dons looked a real threat from set pieces. May again delivered another terrific ball in from the left but Logan couldn’t divert his header on target at the back post, with the Hearts defence all at sea.

GMS added a well deserved second goal for The Dons on 37 minutes. Cosgrove was involved again, laying the ball back to Kenny McLean who played a defence splitting pass through to GMS. The Dons number 11, showed great composure in front of goal, curling the ball past McLaughlin into the far corner.

Lewis Moore had a rare sighting of Joe Lewis’ goal for the visitors just before the break. After a nice piece of skill Moore found a yard and got his shot away. His effort was deflected wide for a corner which eventually came to nothing and The Dons went into halftime with a two goal cushion.

No changes were made to either side at halftime and the match restarted. McKenna picked up the first booking of the game for a foul on Euan Henderson.

The Dons looked in the mood for goals and Cosgrove nearly added a third to put the game beyond all doubt. The forward leapt well to meet Logan’s cross and fire a bullet header straight down McLaughin’s throat who saved from point-blank range.

Hearts boss Craig Levein threw on Harry Cochrane for Euan Henderson on the hour mark as the visitors looked for a way back into what had been a very one-sided affair.

Dominic Ball went close with an ambitious volley from the edge of the area as the home side continued to assert their dominance.

Logan went into the book for impeding Cochrane before GMS fouled the same man to give Hearts a free kick in a dangerous position on the left-hand side. Much to the frustration of the travelling support, who had precious little to cheer all evening, the free kick came to nothing.

McInnes rung the changes with 15 minutes left to play. Christie and Rooney came on for May and Cosgrove who earned standing ovations from the home support.

Hearts striker Kyle Lafferty had two half chances on goal in as many minutes, both of which failed to hit the target and trouble Joe Lewis – who had little to do all evening on what was his 100th clean sheet appearance.

Hearts skipper Christophe Berra was then booked for a cynical foul on GMS, the winger was body checked and stopped in his tracks by a challenge that would’ve been more appropriate on a rugby field. Michael Smith was also booked late on for the Jambos.