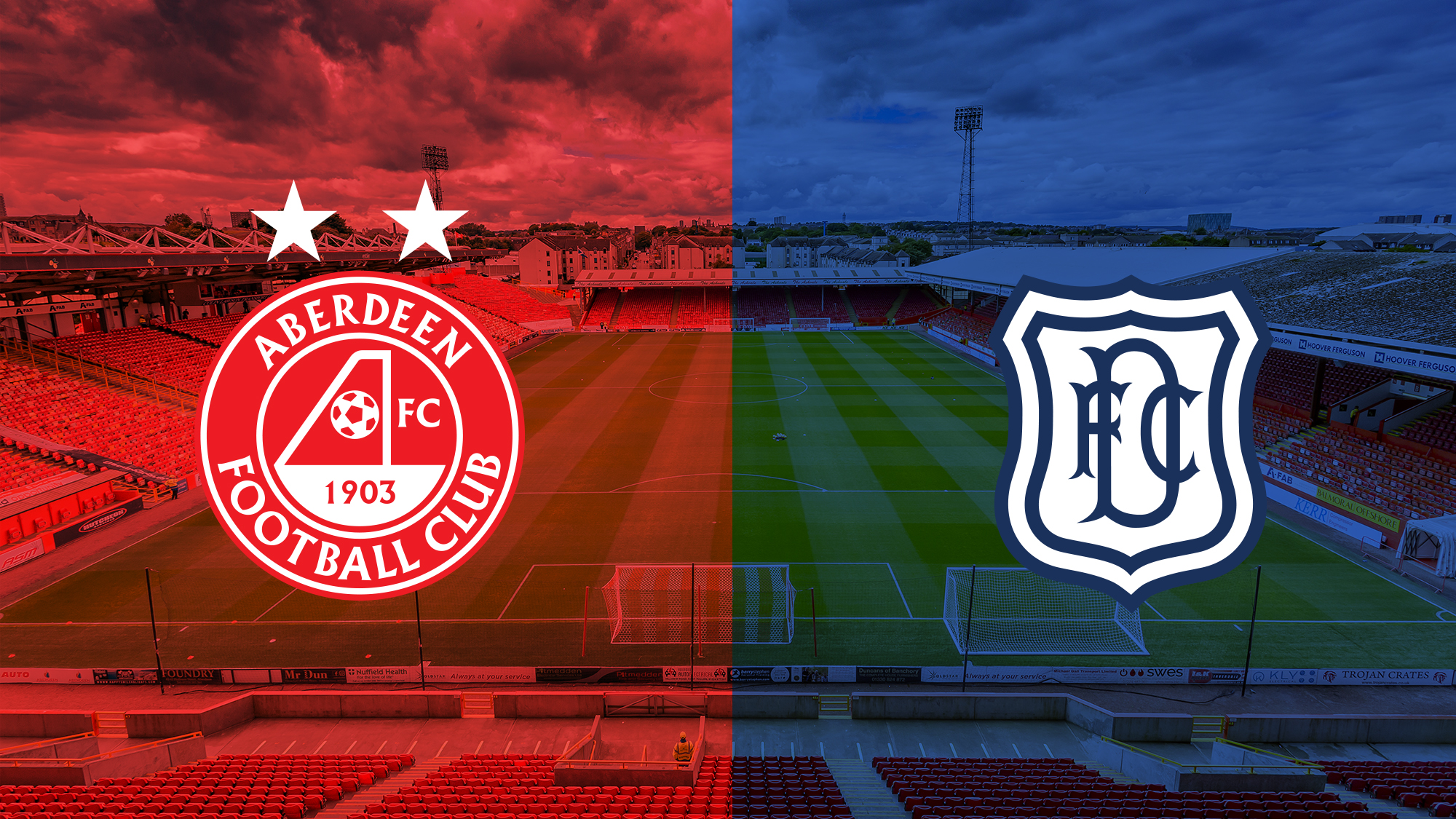 This Saturday sees Aberdeen return to Pittodrie for league duty as they take on Dundee. The Dons are coming into this game on the back of a dramatic night at Rugby Park where they saw off Kilmarnock on penalty kicks to reach the Scottish Cup Semi-Finals. The game itself was by no means a classic but getting through was the most important thing for the team and they can now look forward to a return to Hampden next month.

The Dons haven’t won in the league since beating Hamilton at Pittodrie at the start of February but will take confidence from Tuesday’s win in Ayrshire and face a Dundee side short on confidence. The Dens Park side have one win in five and lost 4-0 at home to St Johnstone last Saturday. Neil McCann’s team sit 10th place in the league and are three points above the relegation play-off position.

On Friday morning Dons boss Derek McInnes spoke to the media ahead of the match.

“I think in the games previously, although we drew with Kilmarnock and at Partick, they’re not poor results in isolation, it’s just sometimes you get a combination of results that can be highlighted more. I think in terms of the final third and attacking play with the attacking players and dynamic, we’ve always been a team this season that have got good individual players there and when they’re on song it can be the difference of scoring two, three or four goals or not and that’s sometimes the attraction and also the risk when you play with those individuals players.

“I believe we’ve got good players here and they’re working hard to get that form and show their full potential. Players and staff we feel the same as supporters. The pain and misery when we don’t win games is clear and it’s also when you win games and you see so many make the effort to come down it was important we got to celebrate with the supporters. It was a significant result. I said after the game we’ve been searching for a big result for a while and a lot of people would have written us off the other night and I can understand why based on how strong Kilmarnock have been recently. It was a difficult game to come through, but we came through it with flying colours.

“It was a great feeling in the changing room. Getting to a Semi-Final at Hampden is a big achievement and it was a tough game. Kilmarnock have been going really well so we’re pleased all-round and at the start of the season one of the goals was to get to Hampden and a Semi-Final to look forward to is great all-round.

“Dundee will be a tough game. I’ve played them here before and it was a tough game, so it certainly won’t be easy. They’ve not had the best results the last while, but I know the players they’ve got in their team and they’ve got a lot of ability. We’ll do our homework on them and look to play our own game, but we’ll certainly have to be weary of them.”

Saturday marks the second visit of the season to Pittodrie for Dundee, who haven’t found it an easy place to come to in recent years. The last time the Dens Park side recorded a victory in Aberdeen was back in season 2003/04, where a late Steve Lovell winner condemned The Dons to a 2-1 defeat. On that day a 17-year-old Andrew Considine made his first appearance for Aberdeen and if selected on Saturday will make his 428th appearance in a Dons shirt. The visitors are also searching for their win against Aberdeen since December 2004, with The Dons winning the previous eight matches between the sides. The biggest win at Pittodrie for Aberdeen came back in

Out of the 105 league matches at Pittodrie between the teams, The Dons have racked up 58 wins, with 31 draws and 16 wins for Dundee. When the teams met in August the match was settled by a double from new signing Stevie May on his home debut. The last time Dundee came away from Pittodrie with a point was in January 2015. The Dons were chasing an eighth consecutive win and clean sheet in a row but were undone three goals in ten minutes from the visitors. With the clock running down Jonny Hayes scored a penalty then Ryan Jack popped up at the back post for a dramatic equaliser deep into injury time, much to the relief of every Dons fan.

In the current team, Adam Rooney and Niall McGinn lead the goal scoring charts against Saturday’s visitors with both players bagging ten goals. Gary Mackay-Steven and Andrew Considine both have four and Graeme Shinnie has two alongside Stevie May.

If you can’t make it to the match on Saturday, join us on RedTV with special guest Michael Devlin from 2.45pm for live coverage including video for RedTV International subscribers. Post-match we will have all the reaction, highlights & goals (from midnight in GB & Ireland) and a full-match replay (from 10pm in GB & Ireland).

Enjoy the game and Stand Free.

The Dons built on their midweek cup success with a 1-0 victory over struggling Dundee in the league. Captain Graeme Shinnie’s first half strike separated the sides and cut the gap on Rangers in second place to just two points with a game in hand after the Glasgow side were beaten 1-0 at home by Kilmarnock. 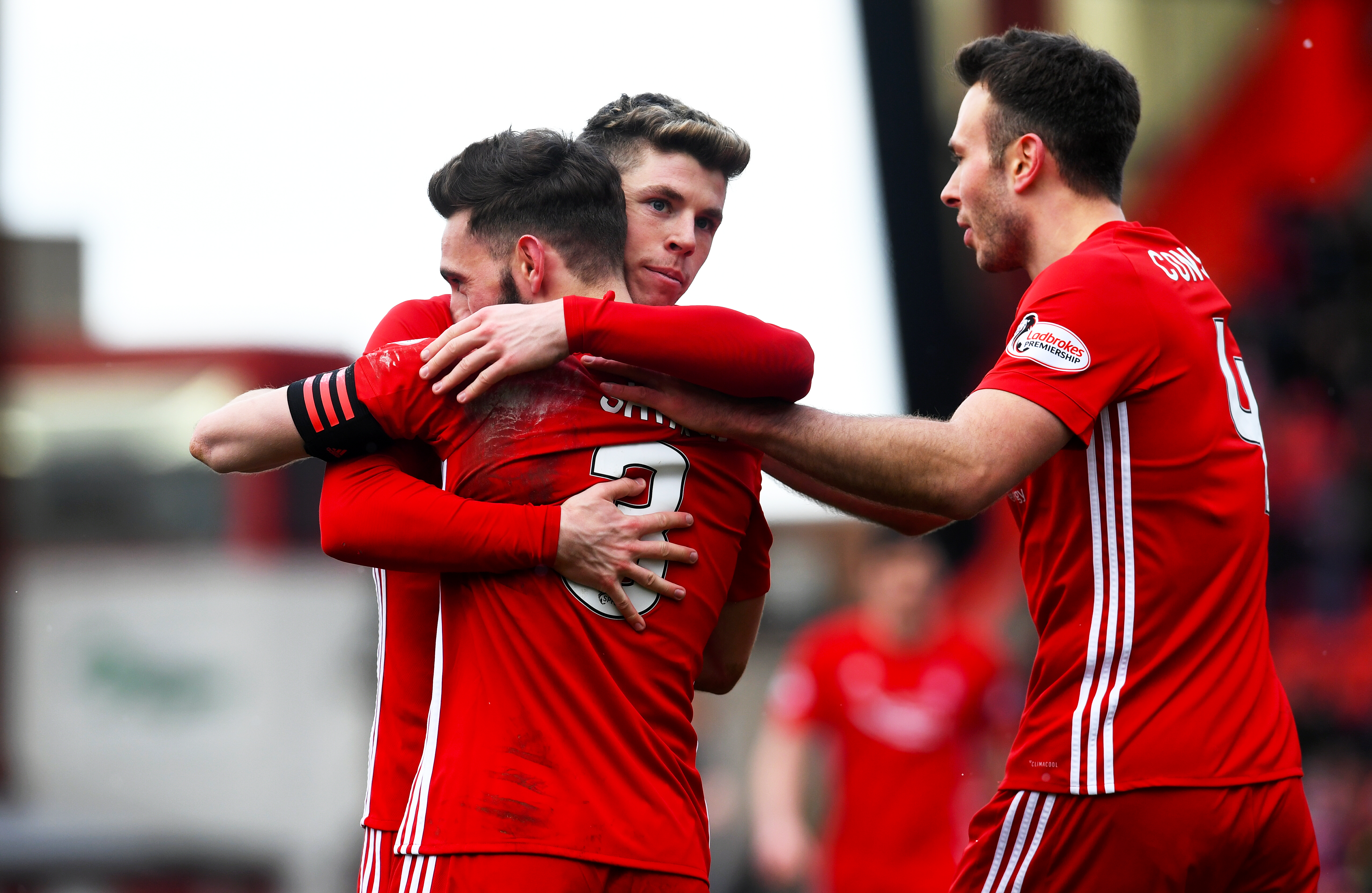 The Dons built on their midweek cup success with a 1-0 victory over struggling Dundee in the league. Captain Graeme Shinnie’s first half strike separated the sides and cut the gap on Rangers in second place to just two points with a game in hand after the Glasgow side were beaten 1-0 at home by Kilmarnock.

McInnes made two changes to the side that knocked Kilmarnock out of the Scottish Cup on penalties on Tuesday night. Chidi Nwakali came in for GMS, whilst Adam Rooney was replaced in the starting XI by Stevie May, who scored a brace the last time Dundee visited Pittodrie in a 2-1 victory in August.

The visitors got things underway and registered an early attempt through Rory Deacon in the first minute, but he dragged his effort well wide. The first 10 minutes were uneventful and fairly scrappy with the windy conditions clearly affecting both sides style of play.

Graeme Shinnie picked up the first yellow card of the game for a raised arm on Deacon. The Dons captain was late in the aerial battle with Deacon and caught the Dundee midfielder which referee William Collum deemed a bookable offence.

Dundee had the better of the half chances in the opening quarter with a few speculative long range efforts which didn’t trouble Woodman in goal.

The Dons nearly opened the scoring through Shay Logan who was making his 200th appearance for The Reds this afternoon. A ball into the penalty area was knocked back and dropped to Logan just inside the penalty area in acres of space. Logan fired his shot against his team mate Kenny McLean who was standing in front of the post on the goal line and was flagged for offside. Although Logan’s effort looked to be going wide regardless, it was a big let off for Dundee.

The visitors then had a golden chance to take the lead on the half hour mark. A-Jay Leitch-Smith found himself bearing down on Woodman’s goal after a long ball over the top, as The Dons defence looked for an offside flag that never came. Woodman spread himself well and stuck out a foot to deny Dundee the opener and keep the tie goalless.

Rory Deacon then had a free kick that clipped off the top of the bar. This gave the home side a wake up call and they began to up the ante.

They got their reward and the opening goal on 35 mins through captain Graeme Shinnie. Christie whipped in a ball from the right hand side which both McGinn and Dundee keeper Elliot Parish contested. The two collided and the ball fell kindly to Shinnie who merely had to steady himself and stroke home from 10 yards out to open the scoring.

The goal clearly gave the players a lift. McLean went close moments later with a long range effort that flew just over the keepers bar. The Dons continued to dominate both territory and possession and looked comfortable for the remainder of the first half, going in at half time with a deserved 1-0 lead.

The second half got underway in light snow and The Dons nearly doubled their lead inside 30 seconds, through Niall McGinn but the forward blazed his effort over.

Stevie May went close following a corner, the ball was fizzed into the striker but he could sort his feet in time and the ball ricocheted harmlessly into the keepers grasp.

A Dons second goal looked imminent and Ryan Christie nearly got it on 53 minutes. Parish could only parry Chidi’s long range shot out to Christie who was following up, but the keeper did well to recover and save the rebound. Although it was a good save Christie will feel disappointed that he didn’t hit the back of the net from that position.

The Dons won a couple of corners in quick succession as the game passed the hour mark. McGinn’s first was poor and didn’t beat the first man, his second was better and was met by McKenna. The defender got up well and found Considine but the left back could direct his backwards header on target.

McInnes made his first change on 71 minutes. Chidi was replaced by Greg Stewart who came on to face his former club. May went close again straight after the stoppage as Aberdeen looked for a second goal to kill the game. Christie did well to cut inside and slip May in with a nice reverse ball but his strike lacked the power and direction to beat Parish.

May had the ball in the back of the net, but Collum pulled it back for a foul on Kevin Holt in the build up. That was one of May’s last actions in the game before he was replaced by Rooney.

As the clocked ticked past the 90 minute mark Rooney nearly scored with his first touch as O’Connor flicked on Christie’s dangerous free kick. The striker was inches away from getting his head on it at the back post and making an immediate impact.

McInnes brought on GMS for McGinn to run down the clock in stoppage time. But there was no late surge from Dundee and the full time whistle sounded with Aberdeen running out comfortable 1-0 winners.