The Dons failed to cut the gap on league leaders Celtic despite creating numerous chances throughout the match on a day when superior finishing was the difference between the sides. 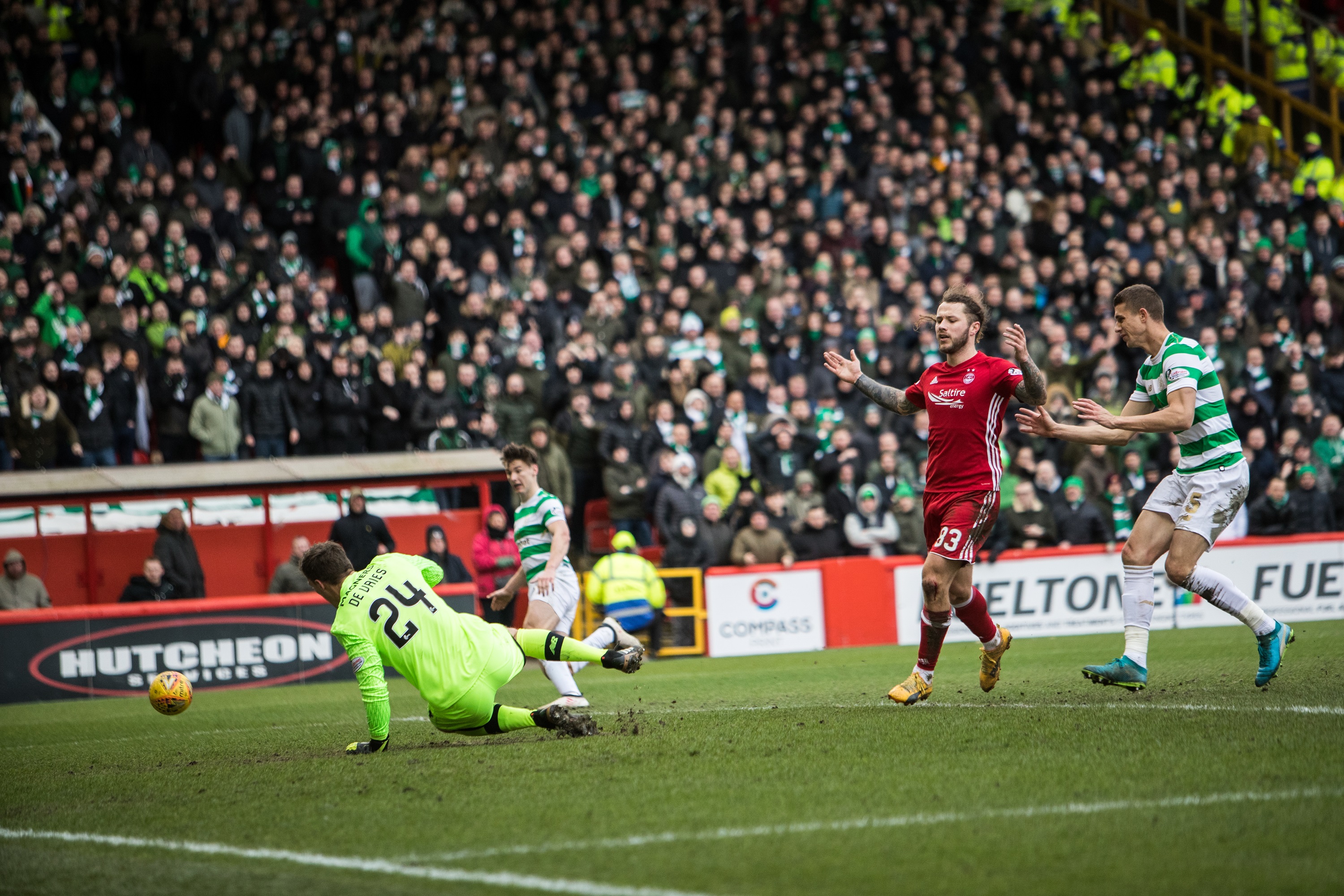 The Dons failed to cut the gap on league leaders Celtic despite creating numerous chances throughout the match on a day when superior finishing was the difference between the sides.

Derek McInnes made two changes to the side that lost last week at Easter Road. Kari Arnason and Stevie May joined the starting XI in place of Adam Rooney who dropped to the bench and Ryan Christie who was unavailable for selection against his parent club. Kenny McLean captained the side in the absence of Graeme Shinnie who was completing a two match suspension.

The visitors got things underway at Pittodrie, coming off the back of a European disappointment in Russia and a home draw with St Johnstone in the league. Celtic dominated the early stages of the tie, winning a couple of corners early doors which The Dons dealt with comfortably.

But it was the hosts that had the first real chance of the game. Stevie May got in behind and was brought down, winning a free kick in a dangerous area on the touchline. From the resulting set piece McLean whipped in a fantastic ball into the six yard box which only needed a touch from the arriving Kari Arnason but unfortunately the centre half couldn’t convert to give The Dons an early lead – a real let off for Celtic.

In the 13th minute Aberdeen had a penalty shout waved away by referee Bobby Madden. Four Celtic players all went for the same ball following Kari Arnason’s long throw into the area and the ball ricocheted up and away off the top of Moussa Dembele’s chest and then arm however the referee deemed the incident accidental.

Moments later the visitors nearly went in front in unusual fashion as Sinclair’s corner evaded everyone and clipped off the bar.

Celtic went close again on 17 minutes. Dembele had a great chance to open the scoring after being played in by Sinclair but Dons keeper Freddie Woodman stood up well to block the shot with his foot. The rebound came out to Ncham who delivered a ball to the back post which Tom Rogic met well but Woodman did well to close down the space and make the save.

Midway through the first half The Dons had another good chance to open the scoring. Captain for the day Kenny McLean did well to control a ball lofted forward. He held the ball up cleverly and swung a great ball in the direction of Stevie May. However the Aberdeen forward’s outstretched leg couldn’t quite get a toe on the ball and the tie remained goalless.

The Dons continued to grow in confidence as the game passed the half hour mark. Mackay-Steven did well to skip past Lustig who brought down his man and received the first yellow card of the game. From the resulting free kick GMS won another corner for The Dons which eventually came to nothing.

Woodman made another good save with his chest following a ball over the top. Considine failed to deal with it properly but fortunately The Dons ‘keeper was out quickly to block Rogic’s effort on the bounce at the edge of his own box.

With 10 minutes to go to half time Celtic struck the post. After a blocked effort from Forrest the ball fell to Ntcham on the edge of the area who curled a shot with real venom straight off the bottom of Woodman’s post. Dembele followed the shot up but was ruled offside.

The warning signs were there and a minute later Celtic took the lead. James Forrest did well down the right hand side to find a yard of space and hang up a teasing ball to the back post. Celtic forward Moussa Dembele showed more desire to get on the end of it and headed home from a yard out.

Just before the break McKenna was booked for a late challenge on Ajer. The resulting free kick was deflected wide for a corner which was cleared away with ease and The Dons went in at the break one goal down.

Neither side made any changes at the break and Aberdeen got the second half underway. The Dons started positively winning an early corner. McKenna got up well to meet the ball in from GMS but couldn’t direct his header goal bound.

Arnason became the third player to enter the book. Dembele made the most of the aerial battle which Bobby Madden deemed a bookable offence.

The visitors could’ve doubled their lead 10 minutes into the second half. James Forrest failed to make the most of a four on two counter attack. With two men free at the back post all Forrest needed to do was send that ball to the back post but Shay Logan was well positioned to block the cross.

Aberdeen nearly had an equaliser moments later. An accidental collision between two Celtic players presented The Dons with a golden chance. O’Connor picked up the loose ball and found mackay-Steven on the left hand side of the penalty area. The winger knocked it square to Stevie May but he couldn’t convert as it was just out of his reach.

As the game went past the hour mark The Dons lifted their aggression and intensity. A few strong tackles and 50:50s lifted the crowd as the home side continued to push for the equaliser.

The Dons went close again on 70 minutes after some pinball in the Celtic penalty area. McLean put pressure on Simunovic who failed to deal with the long ball over the top. McLean’s shot was saved by De Vries from close range. McGinn’s follow up was then blocked on the line before O’Connor’s effort was headed clear.

With 15 minutes to go Celtic were reduced to 10 men. Lustig flew into a challenge on Mackay-Steven and was rightly shown his second yellow card of the match. Derek McInnes made an immediate change, bringing on Sam Cosgrove for his Dons debut in place of Stevie May.

The visitors conceded another free kick in a dangerous area with 10 minutes left to play as Rooney came on in place of Chidi.

The resulting free kick was easily cleared and Celtic countered through Moussa Dembele. The Celtic forward carried the ball 40 yards before slipping in Kieran Tierney on the left hand side who had done well to support the Frenchman. The left back made no mistake and smashed past Woodman to double Celtic’s advantage against the run of play. It was a goal that took the sting out of Aberdeen and effectively killed the game as a contest.

The Dons afternoon soon went from bad to worse. Sam Cosgrove was given a straight red card for a late challenge on Scott Brown with five minutes left to play. It was clumsy from Sam, who wasn’t long on the park. Bobby Madden continued to dish out the cards in the final stages of the game and Andrew Considine joined the growing list.

With six minutes added time The Dons made their final change with Maynard replacing Arnason. Kenny McLean had a late chance in the dying minutes, but De Vries saved well and Celtic were able to see out the game.

The Dons now head to Lanarkshire against Motherwell in midweek before welcoming Kilmarnock to Pittodrie next Saturday in the Quarter Final of the Scottish Cup.