8th win in a row for top of the table Dons 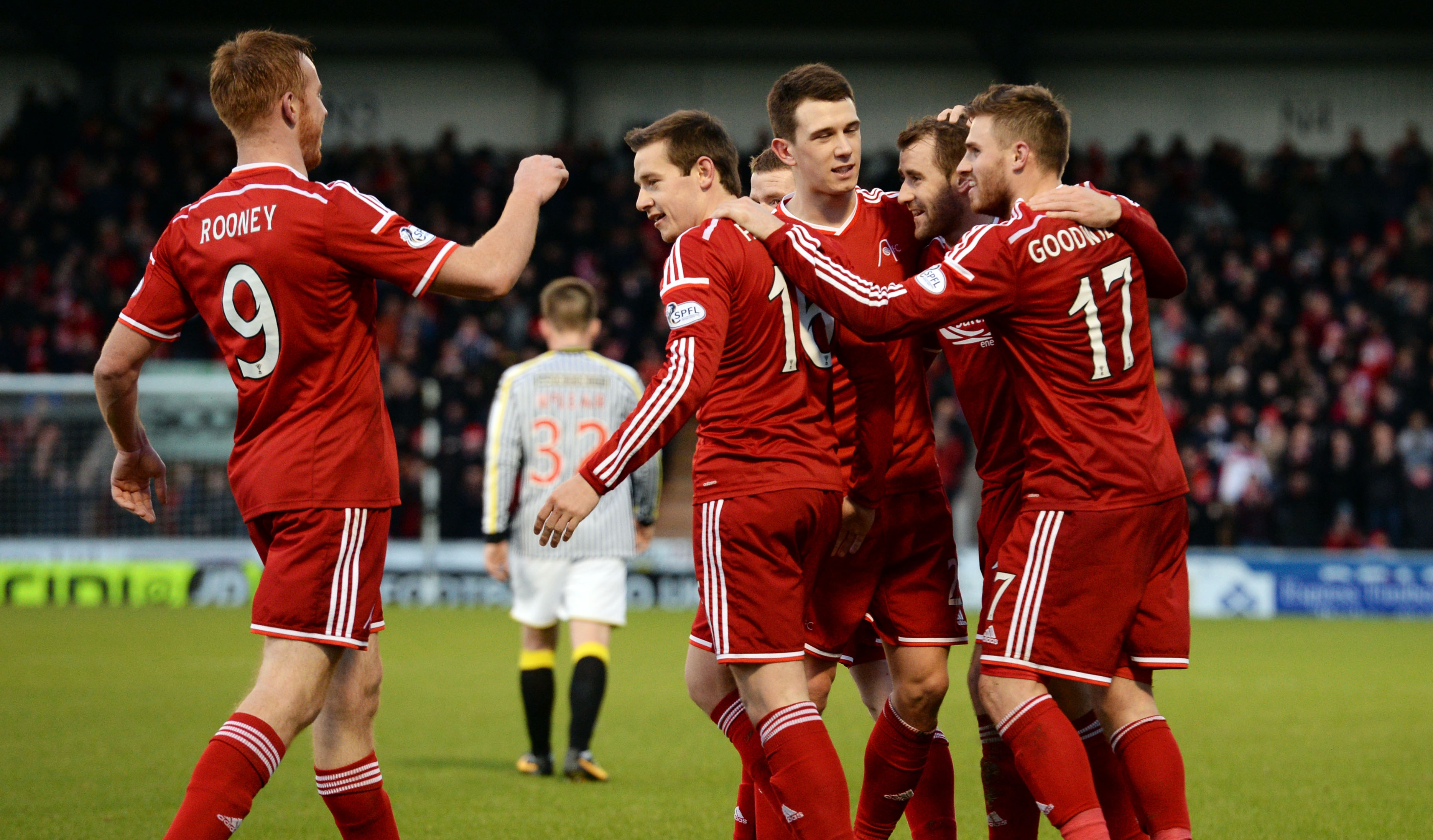 Aberdeen this afternoon beat St Mirren 2-0 to make in eight league wins in a row and kept their eighth clean sheet at the same time.

It is a fantastic record which is put into context by the fact it equals the Dons second best ever winning run in the modern era.

Alex Ferguson’s side twice did in the 80s – Aberdeen had eight wins in a row in 1981-82 and 1984-85 and under Jocky Scott and Alex Smith the Dons did it in 1988-89. That was the last time the Dons had eight league wins in a row during a run which lasted from January to April 1989. None of those runs though including having no goals conceded like the current side. For the record the Dons best run came in season 1970-71 under Eddie Turnbull when they won 15 games and had 12 shut outs.

In difficult conditions, St Mirren played well during the first half hour and it was a very even and open game. However the extremely blustry and wintery conditions were always going to play a part at some point and in the 32 minutes a Niall McGinn cross the left was missed by everyone including keeper Ridgers and the ball sailed into the net without anyone getting a touch. Niall deserved his goal for his performance today and for some of the bad luck he has had in front of goal recently.

Two minutes later Jonny Hayes produced a brilliant run and driven cross which was finished off by Logan and all of a sudden the Dons were two up.

Credit to the home side as they fought hard all afternoon and in the second half Scott Brown had to produce a couple of good saves. At the other end Ridgers also produced a couple of very good saves.

Aberdeen worked tirelessly throughout to preserve their clean sheet record and defended very well. Going forward they put together some excellent moves at pace and this was another very professional and impressive performance from Derek McInnes’ side.

Derek McInnes once again named an unchanged side for the visit to Paisley. So in the familiar 4-1-4-1 formation Brown was in goal with Logan at right back, Reynolds and Taylor were in central defence with Considine at left back. Ryan Jack was the holding midfielder with Hayes and Pawlett alongside him. McGinn was wide right, Rooney wide left, although swapped about a lot and Goodwillie was upfront. St Mirren had ex Dons Gregg Wylde and Isaac Osbourne in their line-up.

All afternoon there were heavy wintry showers coming through the ground and there was a strong wind so the conditions were certainly going to play a part in the game.

Both teams made a very positive start. A good move on 3 minutes led to a Dons corner but the Saints defence cleared. The home side then raced up the park and Kenny McLean was let off by ref Steven McLean despite a clear hand ball. As the players stopped and appealed McLean was able to fire in a powerful shot and Brown did well to tip the ball over the bar. The home side then enjoyed a bit of pressure from the corner but eventually the Dons were able to clear.

On 8 minutes an excellent Jack through ball found Rooney in the clear. He ran in on goal and put a shot across the keeper who saved diving low to his left. The ball almost came back and landed at the feet of Goodwillie. Saints did clear although only as far as McGinn who fired in a first shot from 25 yards and Mark Ridgers in goal did well to get back across his goal to make the double save.

St Mirren were certainly well up for this. Despite their lowly league position they were knocking the ball about with confidence and it was making for a very open and entertaining game. They also were playing a 4-1-4-1 formation and matching up well to the Dons.
On 16 minutes David Goodwillie had the ball in the net but was correctly flagged offside.

On 17 minutes Jonny Hayes took a short free kick. He then fired in a low shot which landed at the feet of Goodwillie but the Saints defence did well to react and to crowd David out. A few minutes later McGinn tried his luck from distance and his wind assisted shot did not go over the bar by much.

On 23 minutes John McGinn, cousin of Dons player Kieran Gibbons, caught a drive really well from 30 yards out and Brown did well to parry it to safety. Isaac Osbourne then had a powerful shot from the edge of the area which was also travelling and was really well charged down by Taylor. Then just before the half hour lone striker McLean was picked out in the area but his dipping volley was always going over.

It really was a very even game up to this point, St Mirren were probably just shading it and slightly the better side but all that was to change on 32 minutes. Niall McGinn picked up the ball wide on the left. He checked back and floated over a curling cross which somehow beat everyone before bouncing in at the far post. No one could quite believe the ball had gone straight into the net! Even Niall looked more than a little surprised as his team mates ran towards him to celebrate. Although it looked a bad mistake from the goalkeeper, he could not react till late and the conditions also played a major part.

Two minutes later, before the home side could regroup, it was two.

Whilst the first goal had a touch of fortune about it, the second came about after some quality play. The Dons put a good move together at pace and then Jonny Hayes did brilliantly to put over a really good driven cross and Shay Logan was on hand to tap home from close range. The fact the full back was in the box shows just how much attacking intent the Dons have in their side.
Aberdeen had not played all that well in the first half hour, but with so many attacking options they always looked a threat going forward. After the goals the Dons completely controlled the possession and Jack was able to dictate the tempo of the game.
The goals had completely knocked the stuffing out of the Saints.

Credit to the home side as they came back at Aberdeen at the start of the second half. On 49 minutes Wylde won them a free kick in a good area after he beat Logan. Reynolds was the man who cleared the danger this time. Then on 51 minutes St Mirren won a corner from which captain Kenny McLean volleyed just over. It was a decent chance.

A minute later Adam Rooney missed a great chance – Niall McGinn put in a free kick, the St Mirren defence tried to play off side but got it horribly wrong and McGinn had a free header but failed to get a touch. Any contract and it would have been a goal. The ball then came back in from the other side and this time the Dons top scorer did make contact at the near post but Goodwin put in a good block.

Aberdeen would have been very mindful of what happened the last time the sides met at Pittodrie –the Dons were cursing at 2-0 but after missing a heap of chances they were pegged back to 2-2. Since then though the Dons have learned how to manage games and they worked very hard to keep another clean sheet by keeping a good defensive shape at all times. In possession they were playing some nice stuff, moving the ball about at pace.

It had been threatening all afternoon … on the hour mark the snow finally arrived! It was not pleasant for the supporters but the 1967 strong Red Army were still in very good spirits. St Mirren then enjoyed another good spell of pressure but the Dons defence forced them to have shots from distance and none of the efforts troubled Scott Brown.

On 65 minutes another close one for the Dons, from a corner Considine put in a powerful header but it was straight at Ridgers. On 72 minutes a good move from the home side opened up the Dons defence for the first time all afternoon and substitute Lewis Morgan had a great chance from close range in the centre of the area. Scott Brown had to produce a very good reaction save to tip the ball over the bar from close range. That was probably the closest they came to getting back into the game.

Aberdeen on the break also had their chances to get a third. On 75 minutes a Hayes low cross was very well cut out by Ridgers. The keeper might have been at fault for the first goal but deserves credit for recovering from that and then having a fine match. A minute later great play down the left by Considine and McGinn, Niall got to the by-line and his cutback was only just cut out.  Then a minute after that Ridgers produced the save of the game to keep out a McGinn volley. It was a great shot and an even better save. From the resulting corner Considine’s effort was saved off the line.

Aberdeen then made a double substitution on 78 minutes with Robson and Smith coming on for Pawlett and Goodwillie. In the 83rd minute the final change from Derek McInnes – Shankland came on for Rooney.

On 84 minutes McLean tried his luck from distance again and Brown had to produce a smart stop, diving low to his left and pushing the ball away to safety. In the 89th minute Lawrence Shankland very nearly scored his first senior goal for the Dons. He produced a great shot on the turn which clipped the top the bar and went over. Although a goal kick was given Ridgers might well have got a touch to push the ball onto the bar. If he did it was another fantastic save. In injury time full back Kelly fired a shot into the side netting.

Another very professional performance from the Dons.