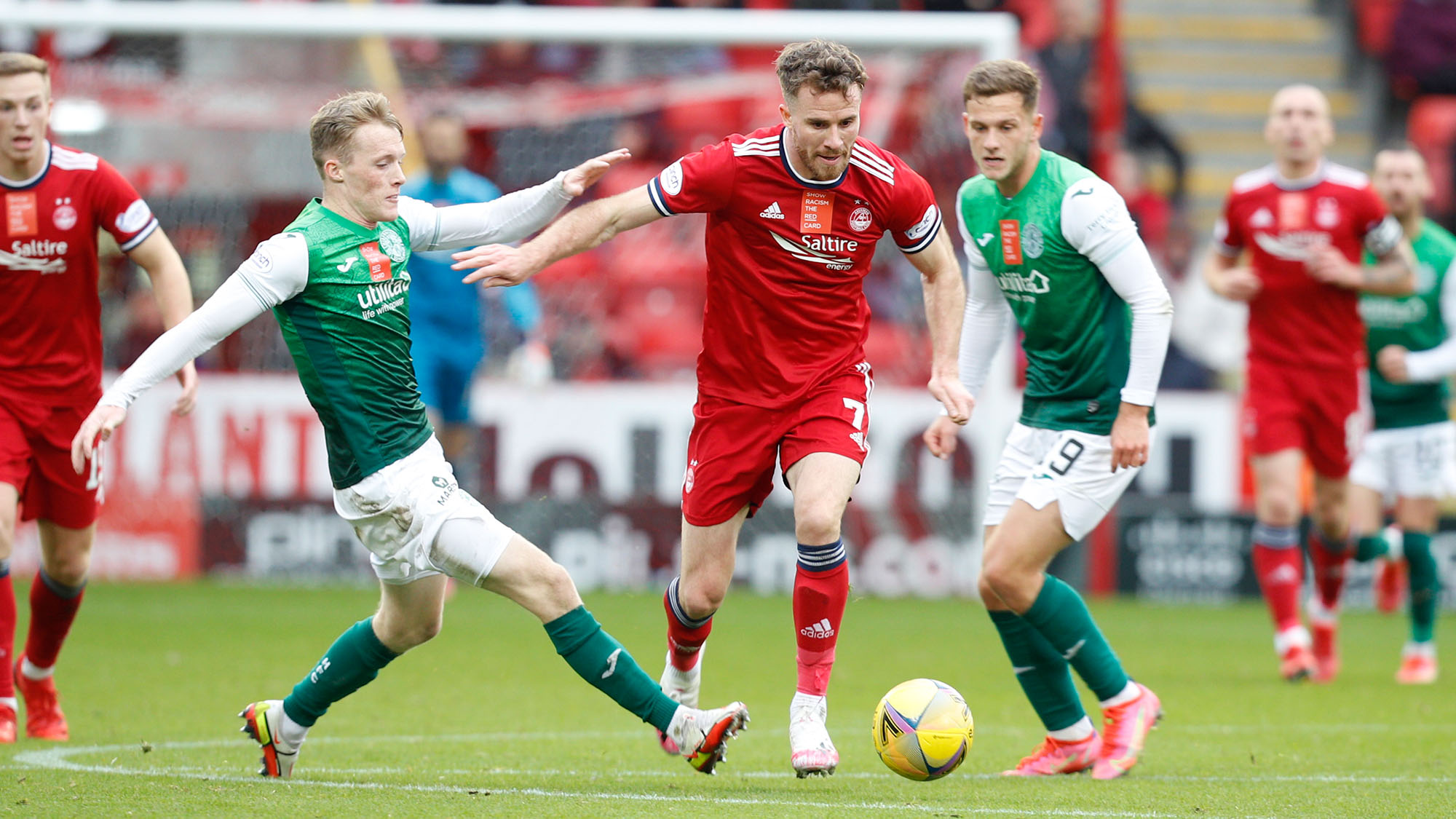 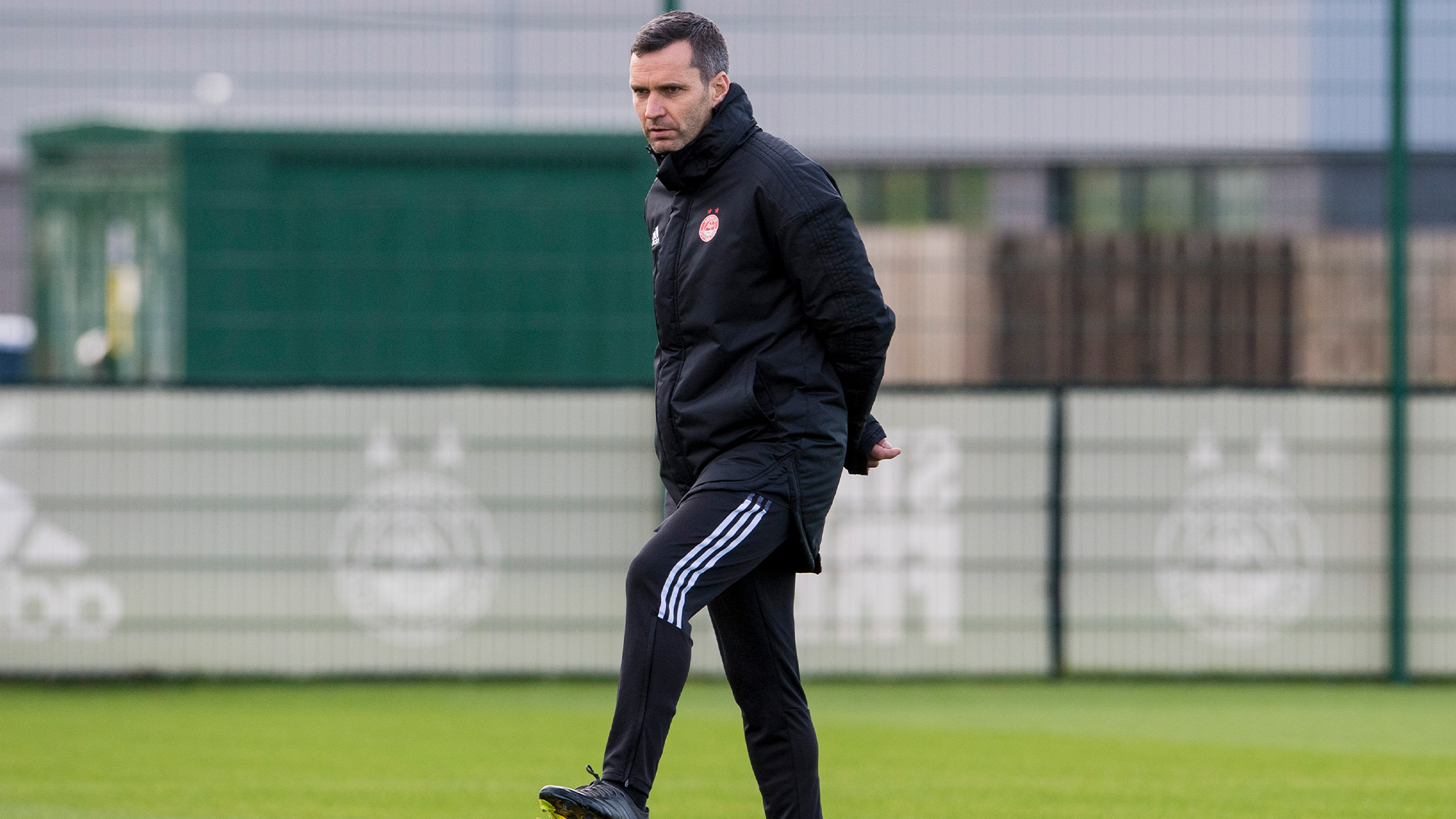 The manager sat down with the media before First Minister Nicola Sturgeon’s update to Parliament this afternoon. To watch in full on RedTV, please click here.

“We would rather play in front of people. Clubs have found a way of playing in an open air environment of having it safe. It is disappointing news.

“I know that Shaun Maloney was a tremendous player, he had a very good career. He was an international footballer and has been working with one of the best recently (the Belgium national side). I also know that it is a different kettle of fish when you are standing in front of a team and it is your team and you are responsible. That is the challenge that he has taken on at a very good club.

“Hibs have been playing every midweek and weekend since the start of December. They are coming off a disappointing result at the weekend but they have a new manager. To me it is what we do that is going to affect the game and that is what I will focus on. It is what we always do and the situation doesn’t change anything.

“It is slightly less predictable now that they have a new management team in place, we don’t know how they are going to tackle it. What I do know is they have had limited time to put any ideas into the players. They have got a choice, do they stay with what they have got and try and tweak it a touch or do they go all out, change things and hope that the understanding is correct. That is why it is important they we concentrate on us. We have been particularly good at that at tough venues and if we can do what we do well I think we will dictate how the game goes. The performance level on the night dictates it. 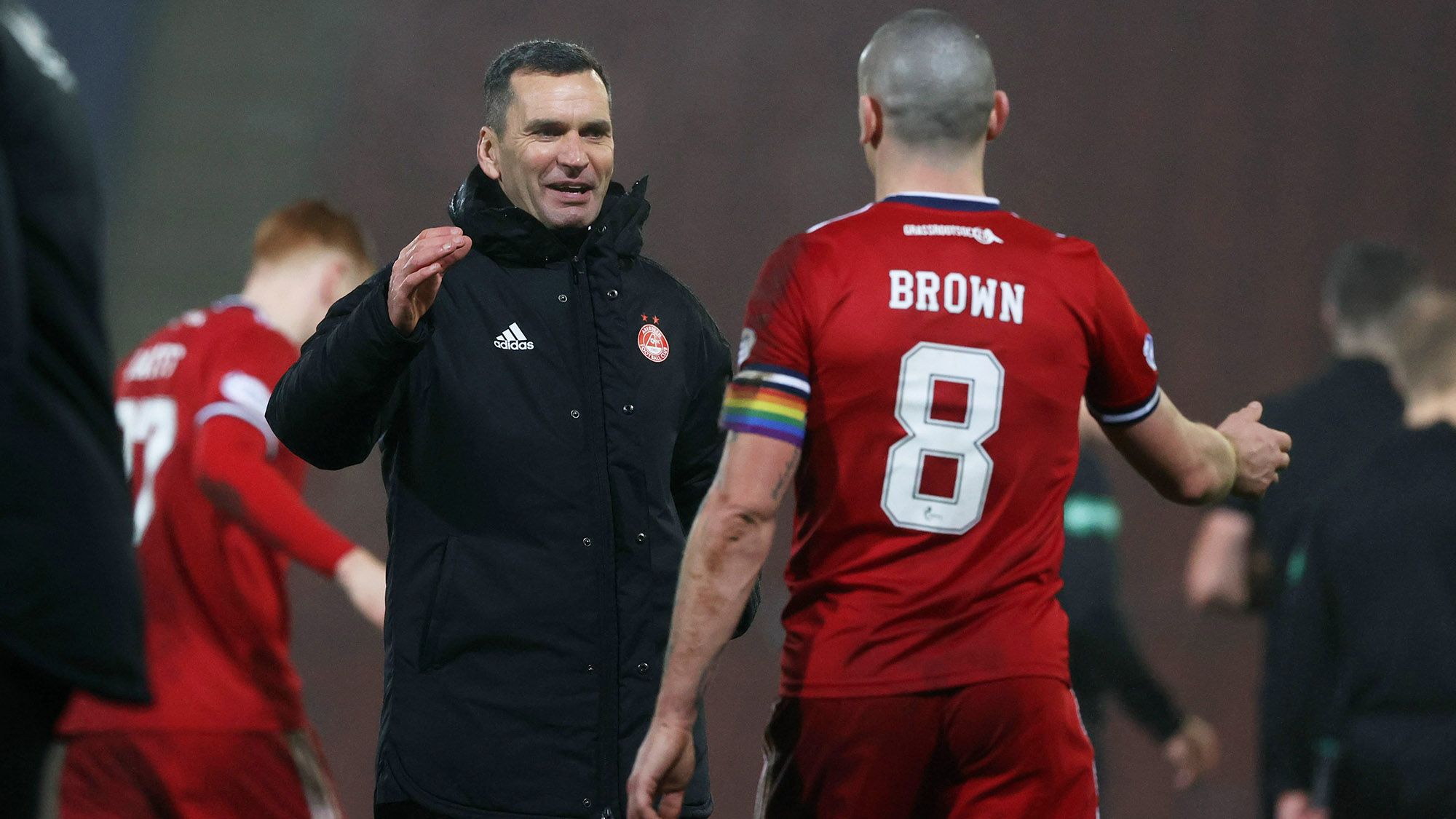 “We will have an enforced change to make as Ross McCrorie is suspended. I have got good options to make changes to the team if we choose to do so.

“With the Covid concerns at the moment it is a constant worry that something is going to pop up. You see society and the amount of numbers that are going up and up. The club has got some brilliant people behind the scenes that are working to keep us and our families safe. We are grateful for that and we will continue to do that. I am sure that there will be bits and pieces that pop up here and there but if you can contain it as much as you can then you give yourself every opportunity. We are grateful to the club for everything that they are doing.

“Since our last game we have been able to get some of the ones back who have needed time in their legs. There were some that had come back who had barley trained. We managed to get a good couple of weeks on the training ground ahead of what is a tough couple of weeks. It has been good to get them on the training ground pitch again, we have enjoyed it. We are looking to start enjoying games of football again and hopefully we do that tomorrow.

“Both lads had been pushing in training, the team was also needing something a little bit different. We as a staff felt like it was the right time to put them back into the group. They have certainly responded, their performance levels have been brilliant. The rest of the team have performed pretty well as well. There is a group behind that is pushing pretty hard. I have got a lot of options which is going to be pretty important over these next four games that are coming up. In case anything changes and you need to make some quick alternations then you know you have people who are capable of coming in. 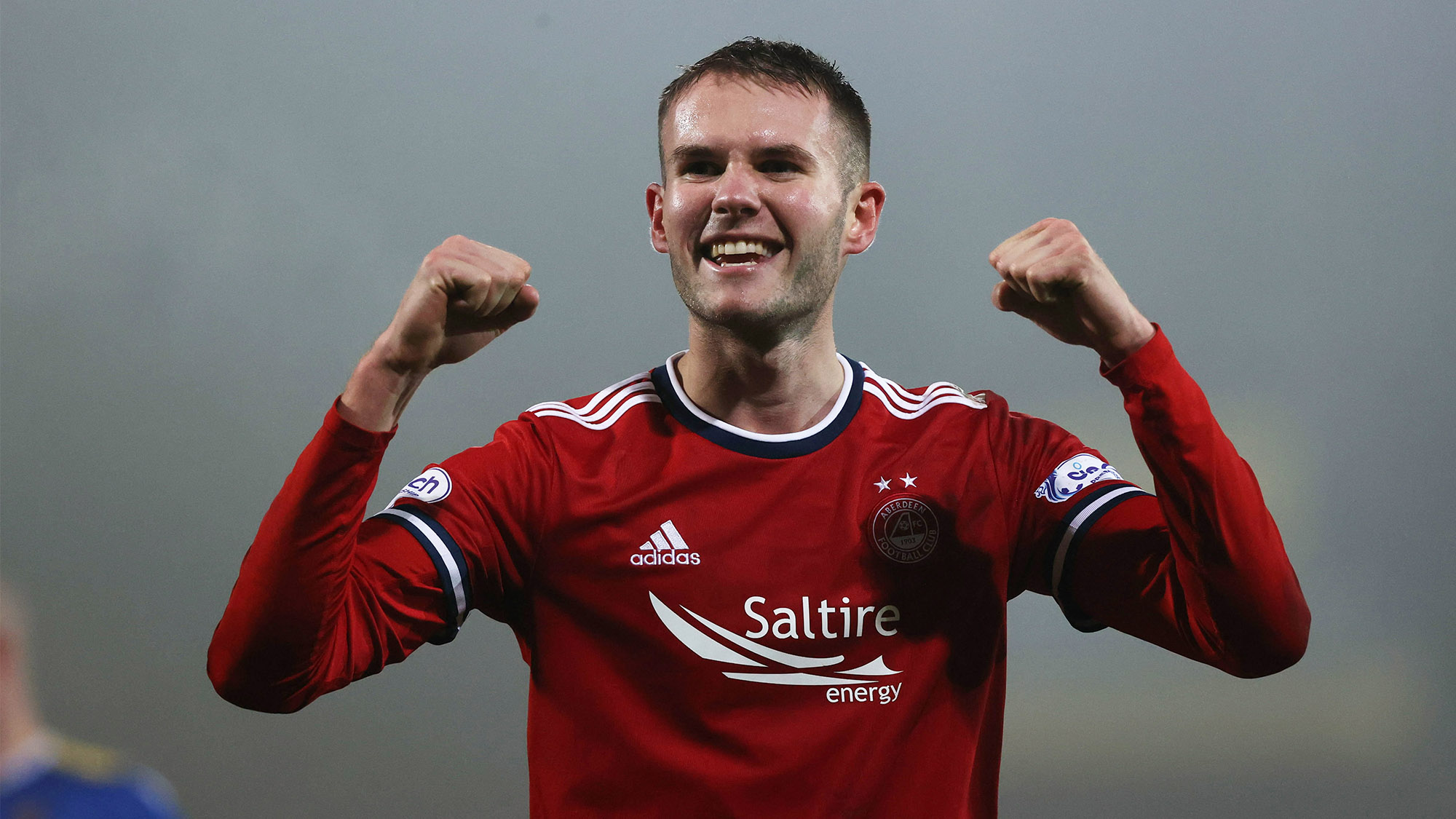 “They all share in the success. The defenders are delighted when the forwards are scoring and the defenders are doing their part by keeping the ball out of the net at the other end. It has very much been a team performance. There are individual plaudits that get dished out along the way but I think we are pretty good at spreading it around. They all feel the value that they are to the team at the minute and if you keep winning games hopefully that spreads further and it lasts for longer.

“The aim in every window is to come out stronger. There are a lot of players that we are looing at. It is important to concentrate on what we have got and get to that window in a good shape. The players that are here are looking to push their case so we don’t need to go and bring in reinforcements. There are things going in the background that we are looking at. We are obviously focused on the games hugely at the minute. Darren Mowbray (Head of Recruitment) is focusing heavily on the transfer window. We are concentrating on the job at had which his getting points on the board.

“The biggest impact is going to be the Boxing Day game with Dundee and the game with Rangers on the 29th. There is no doubt that we would rather play that in front of people who have come home for Christmas to watch us and they have already bought tickets. I think the club provide a safe environment but we don’t make those decisions. If it was played in front of very limited fans of course I would rather not play it and play it in front of a big crowd.” 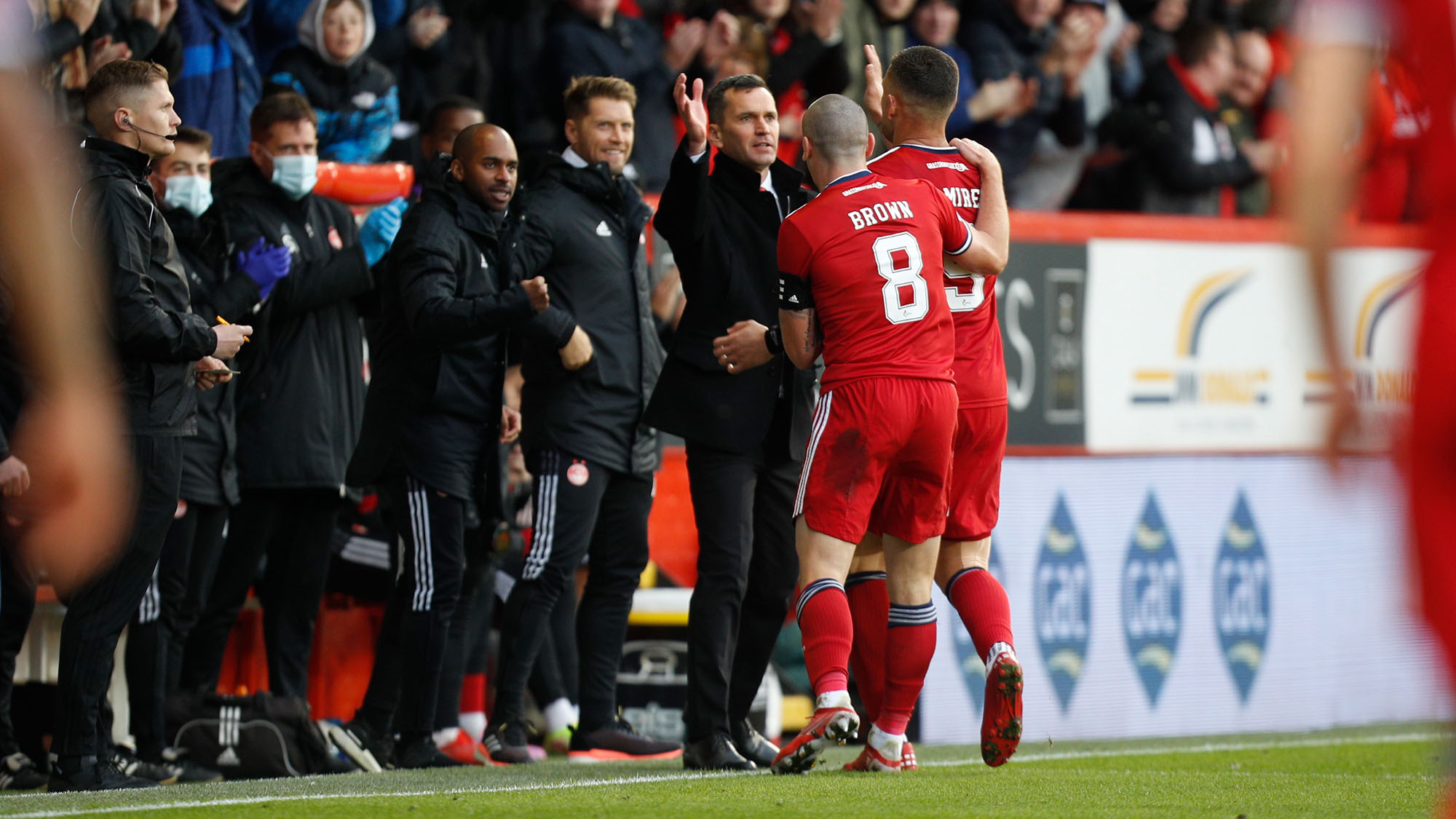 We faced Hibs earlier this season at Pittodrie as we ran out winners by a goal to nil. Christian Ramirez scored the only goal of the game when he connected with a Calvin Ramsay cut back to score past Matt Macey. The three points at Pittodrie set up a big week for The Dons as we went onto draw with Rangers at Ibrox and then defeat Hearts a week later back in Aberdeen.

Report | No festive cheer in the capital 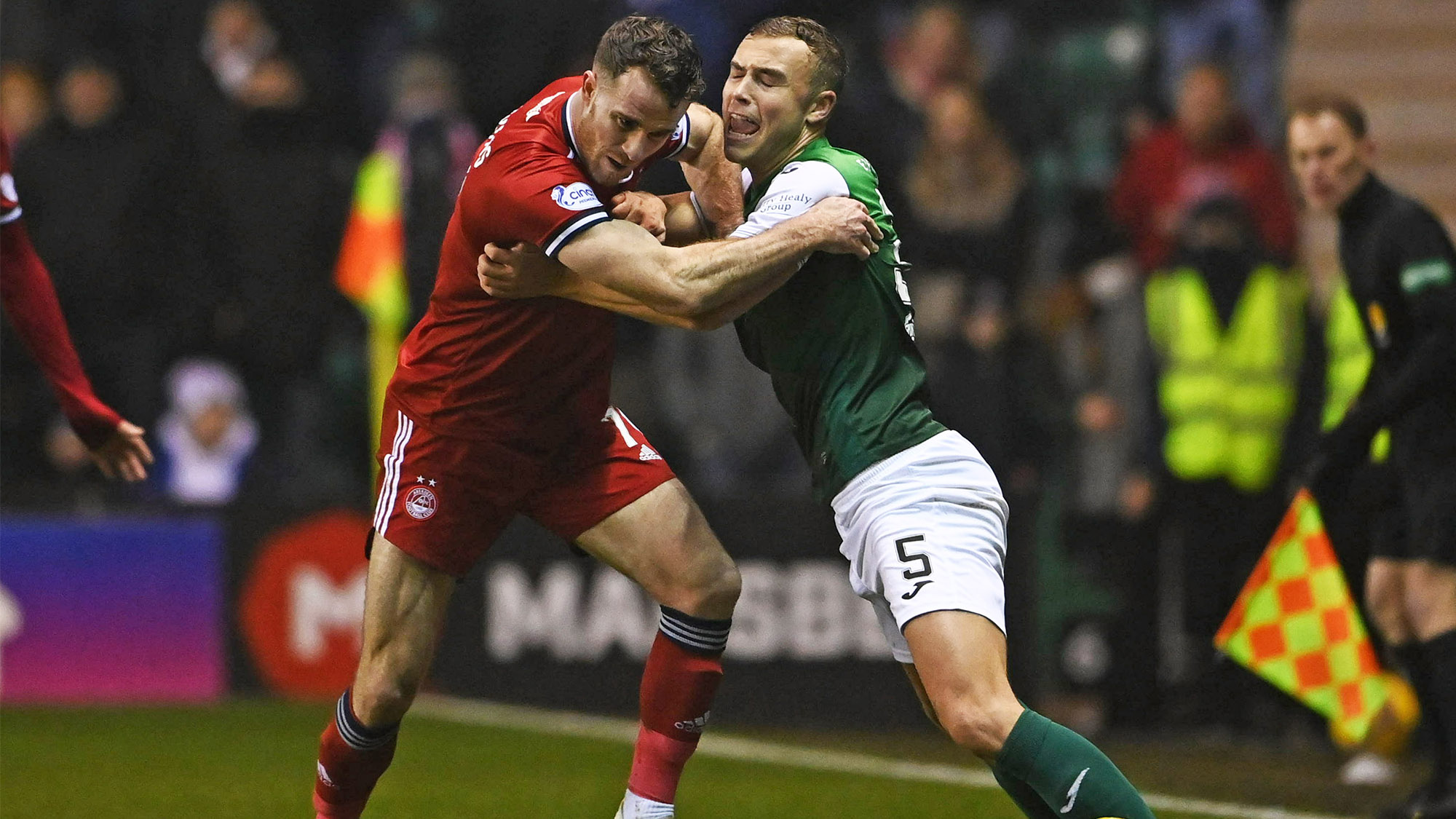 Following the 1-0 win at St Johnstone, there were two changes for the Dons in the capital, with Ross McCrorie suspended and Scott Brown also missing. In came Declan Gallagher and Dean Campbell. Niall McGinn and fit again Calvin Ramsay returned to the bench for Stephen Glass’ side.

After tasting defeat in the League Cup final, losing 2-1 to Celtic on Sunday, Hibs made three changes with Jamie Murphy, Lewis Stevenson and Joe Newell missing out, the first two dropping to the bench. Replacing them in Shaun Maloney’s first starting XI were Josh Doig, Chris Cadden and Scott Allan.

Both sides took a time to settle on a pitch made greasy by the pouring rain. It was Hibs who started to find their range first, but Aberdeen defended soundly and gradually began to look the more dangerous side when they did get possession.

It was a measure of the early stalemate that it was fully 15 minutes before there was any real goalmouth action, Jay Emmanuel-Thomas bursting through the middle to shoot from 20 yards, his shot deflected wide for a corner that came to nothing.

Ten minutes later, Campbell was inches away from opening the scoring. A free-kick from the Aberdeen left was half cleared but Campbell swooped down on it from fully 25 yards out and saw his shot fly through a crowd of players but swerve just past the post with Macey at full stretch.

Lewis Ferguson followed suit on 27 minutes, fed by Jonny Hayes 20 yards out. His low drive saw Macey scrambling to his right to push the ball behind at the foot of the post.

Hibs’ first chance came on 30 minutes, Doig’s cutback ballooning up off a deflection for Nisbet, but from six yards out in the centre of the goal, he put his header over the bar, an escape for Aberdeen.

Doyle-Hayes picked up a knock in an innocuous looking challenge on 33 minutes and was replaced by Gogic in the evening’s first change.

A goalmouth scramble almost gave the Dons a goal on 38 minutes, Hayes crossing on the run from the left. Emmanuel-Thomas was up at the back post to nod down, Marley Watkins pouncing on the ball at the same time as Hanlon, Macey tidying up the loose ball. Moments later, Gogic went into the book for a late tackle.

Hibs enjoyed some possession late in the half, the Dons having to survive a free kick in the added minute which they did, and the teams went in level at the break. Aberdeen had the better of the first half without really creating too much in the way of clear-cut chances.

Ramsay returned to action for Aberdeen after the break, replacing Emmanuel-Thomas.

Christian Ramirez took a stray boot in the Joe Root area from Porteous on 48 minutes. The referee missed the action, much to Porteous’ relief, as otherwise, a card would have been inevitable. Allan could have seen yellow a couple of minutes later too for taking a chunk out of Ferguson, then Gogic completed the hat-trick of Hibernian good fortune after tugging on Campbell’s shirt.

Ryan Hedges went on the sprint to close down Macey on 55 minutes and wasn’t far away from getting a proper block on the goalkeeper’s clearance which could have seen the ball ricocheting anywhere. Allan was replaced by Murphy for Hibs’ second change on 59 minutes.

The Dons were behind on 63 minutes, a self inflicted wound that started from a poor free-kick in their own half between Gallagher and Ramsay, possession given away cheaply. That led to two Hibs corners, the second of which was driven in by Boyle, Porteous getting a run on it to power in an unchallenged header. Aberdeen responded with the introduction of Teddy Jenks, replacing Campbell on 68 minutes.

A better spell of possession for the Dons culminated in Ramsay taking a pot shot from 25 yards but Macey had it well covered as the ball curled wide of the target on 73 minutes. Watkins was much closer a minute later, Ramirez digging out a terrific cross to the Welshman, eight yards out at the back post. Macey got across to push the ball wide, but it was a great opportunity for Aberdeen to level things up.

Nisbet was booked on 76 minutes for an off the ball hack on Ferguson, Connor McLennan replacing Watkins in the aftermath. Nisbet was taken off for Doidge in Hibs’ third change on 83 minutes. Hedges became the first Aberdeen man to be cautioned for what was adjudged a late challenge as the game entered the final two minutes. Ferguson followed him moments later as he challenged Macey as he tried to clear, summing up the Dons’ second half frustration.